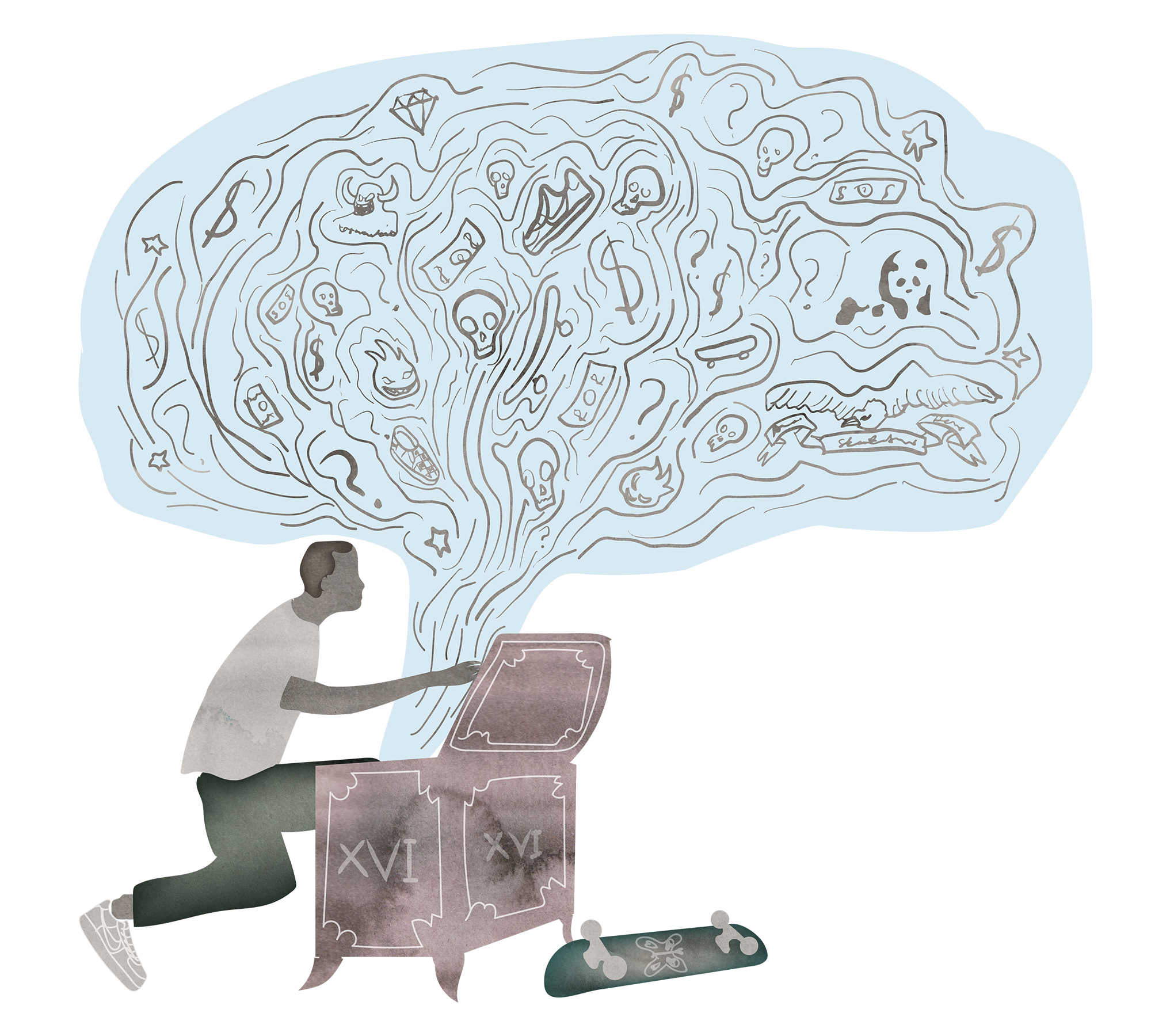 Skateboarding is so damn fun that it’s easy to forget it’s also an actual j-o-b that some people do to make ends meet. Just like the regular jobs you and I work, there are a lot of nuances, expectations, and obligations that the greater world doesn’t necessarily know about. We got curious about what some of those things might be, so we dug into our contact list of industry heads—who will remain unnamed—to get some insight from people who are truly in the know. If you’re a SLAP head, you might know most of this stuff already because you bastards seem to know everything. For the rest of you, hopefully, you’ll come out of this learning a thing or two, because we certainly did.

Depending on the board brand or distribution, some pros can make as much as a $10 per board if you buy it directly from their sponsor’s website. The riders still make money from skate shop sales as well, but online is where they get the biggest chunk because it essentially cuts out the middleman and has a bigger profit margin.

2. Professional skateboarders don’t always own the rights to their footage

As Roger Bagley puts it, that’s “The person who hit record, or the person paying the person to hit record.” Given the buddy-buddy nature of the skate industry, this generally works, but it is far from beyond its downsides. This practice has definitely led to the occasional hostage situation where a filmer won’t give up a footage until they feel they’ve been compensated fairly. Filmer J. Strickland infamously demanded $10,000 for Kirchart’s Sight Unseen footage for instance. Sometimes an entire part just never gets released if a filmer doesn’t feel like they received their due. A way around this is for a pro to work out a deal and pay a filmer directly for their time and skills, but it is very rare for this to happen.

3. Vans was the first shoe brand to sponsor skaters

The first “pro” shoe contract was for Stacy Peralta, who became the first skateboarder to sign a paid contract with Vans for $300 a month. This deal was to promote Vans and their new shoe the Skate-Hi starting in 1973. A bare-bones shoe contract nowadays, almost 50 years later, pays roughly 10x that amount a month. But every contract is different with photo incentives, travel stipends, social media stipulations, and whatever else.

4. Mark Appleyard had the first million-dollar shoe contract in skateboarding

Back in Mark’s C1rca days he was offered one of the fattest contracts in skate shoe history, and good for him, but those days are over. A signature shoe for a bigger company still will pay well into the six-figure range with the option to make more if the design does well, but people are not making millions right off the bat anymore. 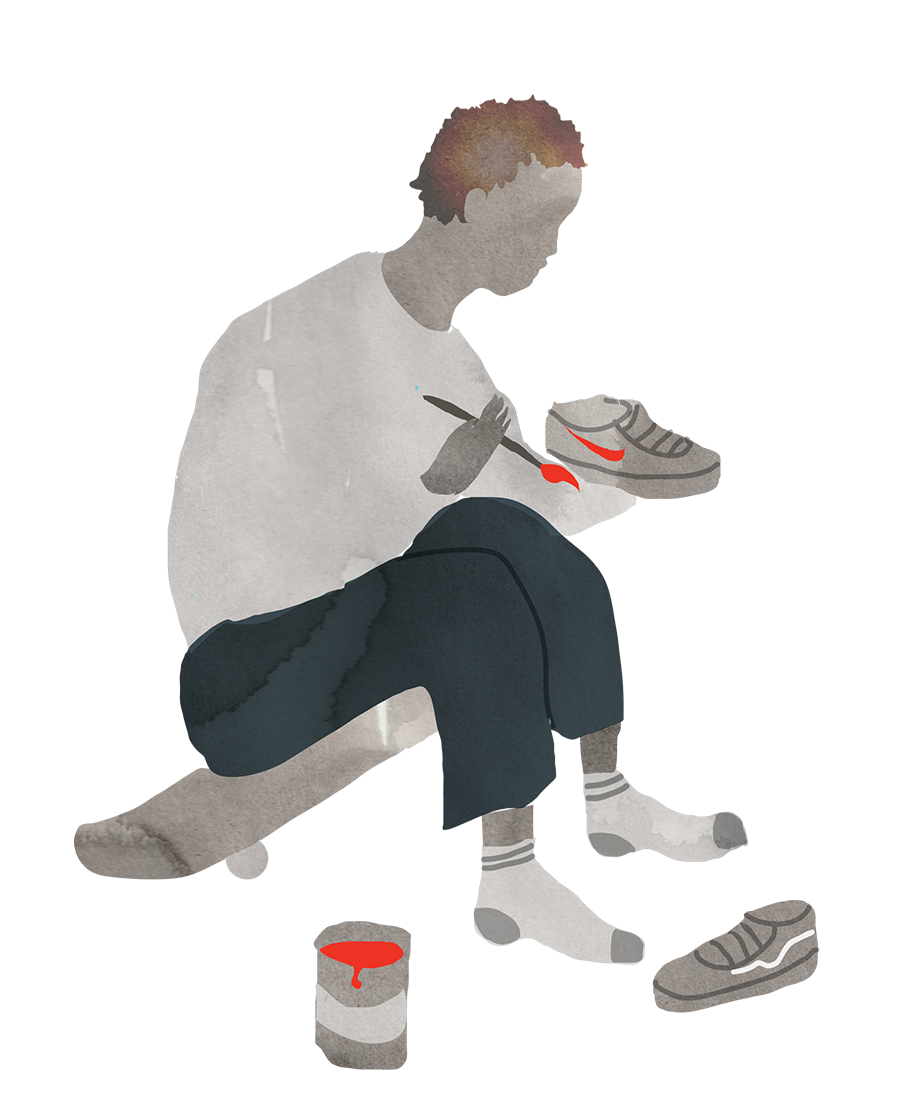 5. A shoe colorway doesn’t pay as much as you’d expect

Instead of designing a pro model shoe from scratch, many of today’s pros are offered to choose the colors and materials of already existing models. A pro can expect around $5,000 flat for a colorway deal or sometimes $1 per shoe sold.

6. Not every pro rides the product that they are sponsored by

Not everyone can ride for their first choices, so many take a paycheck from their third or fourth favorites, which is why if you look closely in photos, some pros aren’t riding their sponsor’s trucks or wheels. One enigmatic Gravis Footwear pro made it into a few magazines wearing his more highly favored Dunk. There have been instances of skaters painting another brand’s logo on different shoes and it was done so well you couldn’t even tell. As long as you cut the logos off, photoshop them out, or edit the logo in post, you’re probably safe. However, if a sponsor’s looking to cut your contract, that’s a sure way to get it done.

7. Many pros supplement their income by slanging product on the low

Pros generally receive more product every month than they’ll ever be able to go through and the solutions of what to do with all of the gear are as colorful and varying as the minds that concoct them. Thrift stores and second-hand shops are easy answers. Getting your homie to sell it for you on their Depop is another. In the early energy drink days, taking a case of Red Bull to your local bar meant at least a free night of booze. A Long Beach burrito spot’s entire staff got laced up with C1rcas so nice by a local pro that food was free for a few years for him and the boys.

8. Health Insurance is not offered by most sponsors

Some skateboard companies have tried matching health insurance costs 50/50 with their riders. It hasn’t always worked because several of the skaters defaulted on their payments and were no longer insured. There’s an analogy about biting a hand that’s feeding you or something, but I can’t remember it. 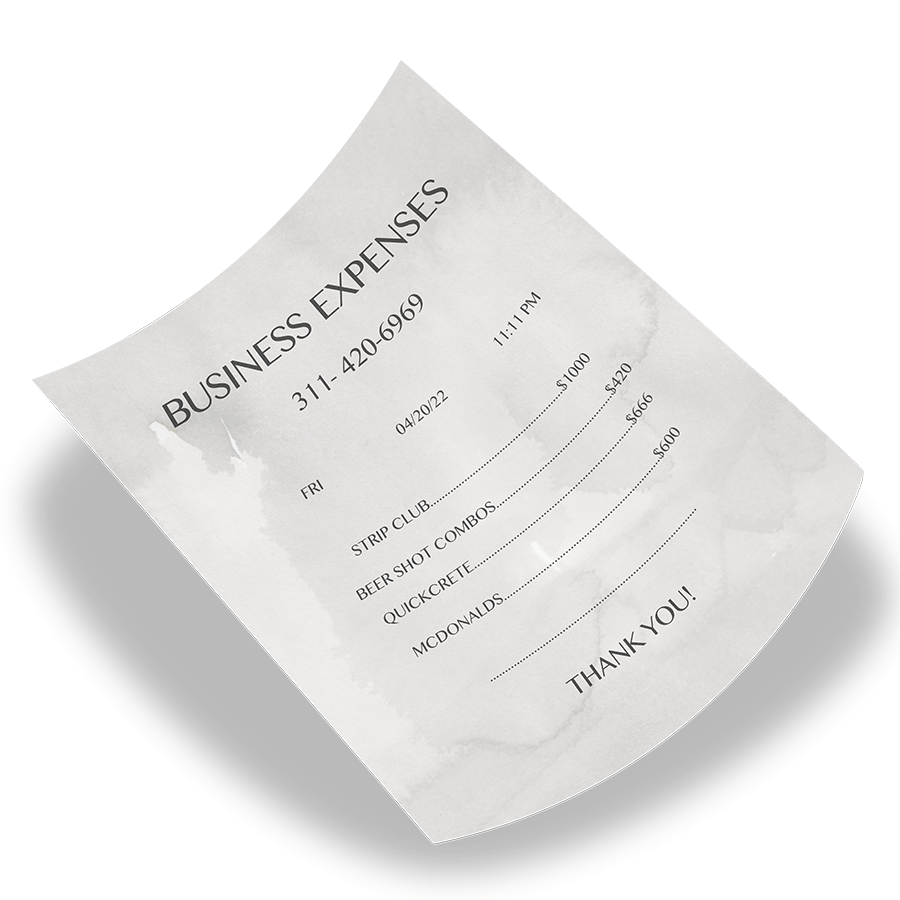 As independent contractors, professional skateboarders have to stay pretty versed in what they can write off for tax season. Travel expenses, clothing, and food are all part of the usual, but if you think bigger suddenly a mini ramp or private park looks a lot more reasonable. This receipt might look like we spent $15K at a Tijuana strip club, but what I actually did was treat some potential sponsors and collaborators to a night of “food and entertainment.” Keep your receipts, and maybe consider a money manager like Ryan Clements.

10. There are a few doctors that help skaters for the culture

There are a few go-to doctors who are fans of skating and will go out of their way to work with a skater and help fix whatever they need. One doctor has even been known to accept their payment in product just like a flow skater. If it’s outside of the doctor’s expertise they might connect the skater with other specialists who can help in similar ways.

Companies like Redbull and Monster have all helped their athletes “train” by paying for their rider’s backyard skatepark. Hell, even a company that makes ramp material like Gator Skins might even hook it up for free. So next time you see a big ass logo in someone’s backyard just know that the logo isn’t there because the rider is that stoked on chugging Monster…hopefully.

There are plenty of pros out there who have all sorts of particularities when it comes to the boards they skate. Some pros won’t ride any board that has red top plywood. It’s even considered taboo for a company to ship any red tops to their pros. Other pros have different finicky concerns, like where their board was in the hydraulic press when that batch of boards was made. 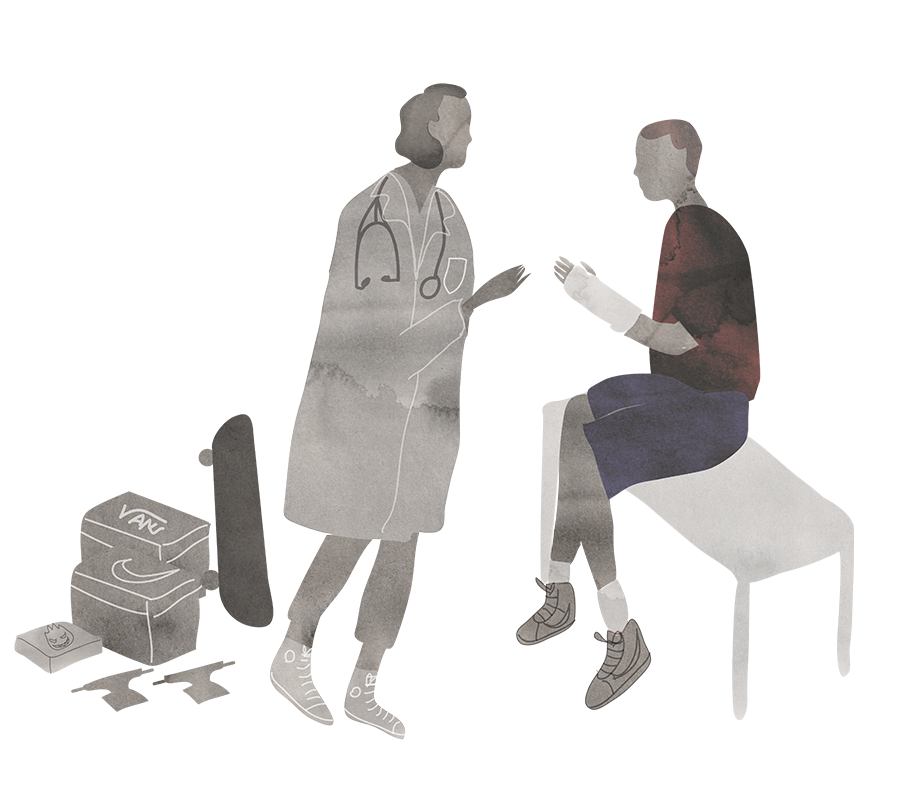 13. Pro skaters can get paid just for showing up to a contest

In the past, Street League paid skaters $5000 just to show up at the contest and skate. However at a contest like Tampa, where there are 100+ skaters, there’s no appearance fee, just free beer after the contest and a good ass time.

14. They can also double their contest winnings

15. The photo isn’t always the make

Usually, the photo that is published is the one that looks the best but is not necessarily the make. In Tristan Funkhouser’s case, he ollied over the China Banks without a photographer there. When he went back with Marco Hernandez to get the photo he was wearing almost the same fit. 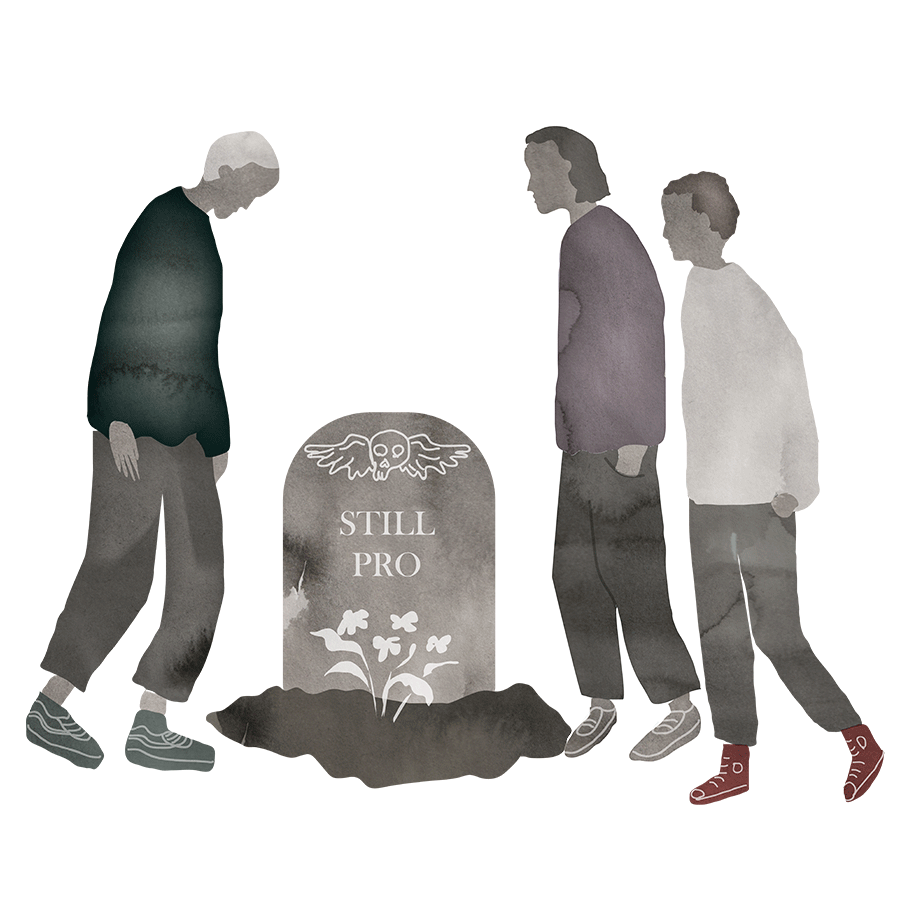 First things first, the only way to stop being pro is to officially retire a la Heath Kirchart or Daniel Shimizu. If you don’t call it yourself, great news, you’re technically still pro even if no one will put your name on anything they want to sell. Nope, you need not product stocked in skate shops to still be pro, just a can-do attitude will keep that narrative alive, so guys, keep milking it.