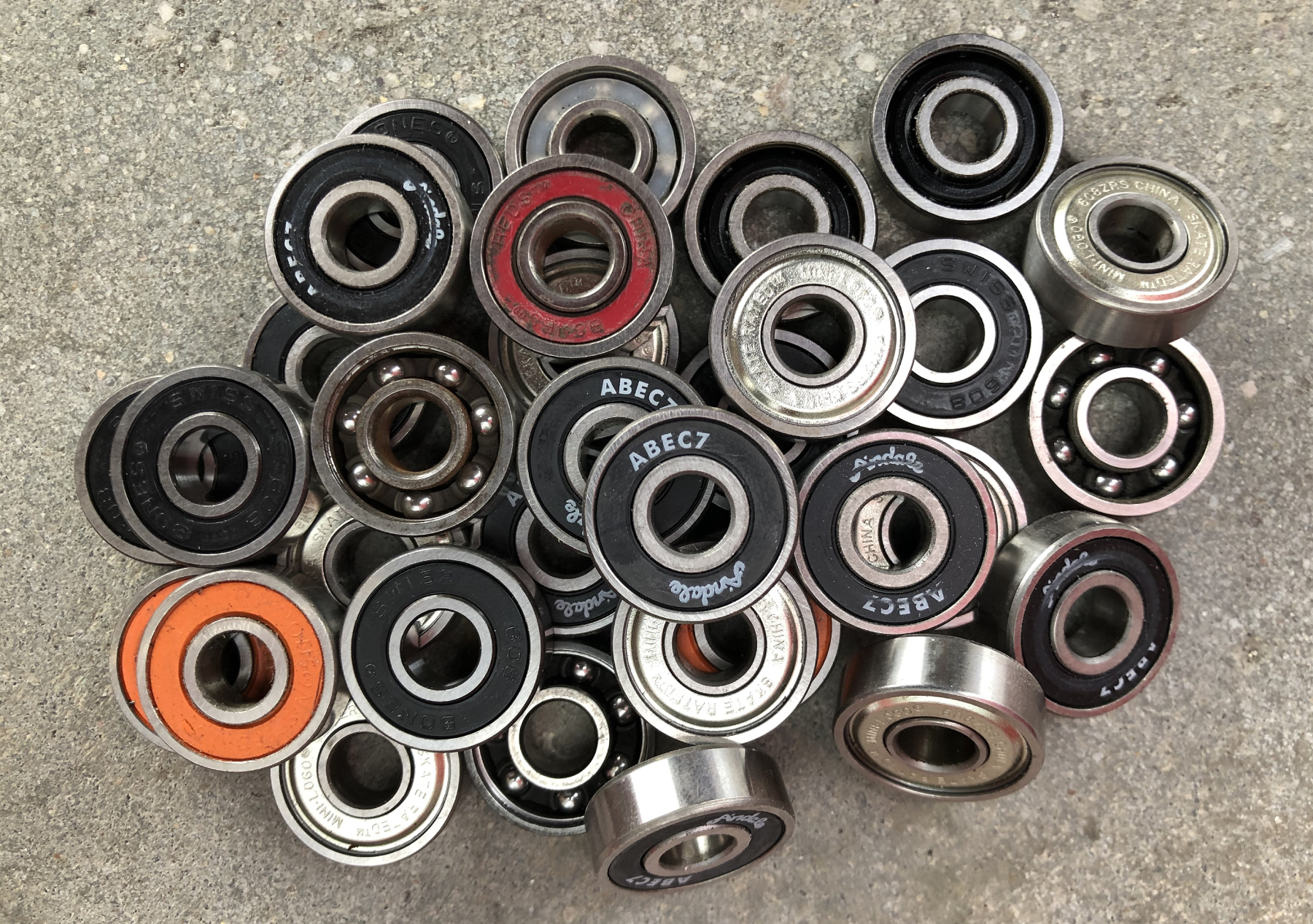 Bearings are one piece of gear for us that truly are a difference-maker when it comes to getting enough speed for a trick or for getting from point A to point B. There are so many companies and designs out there, and you may have never even thought about how we got to the modern bearing of today. So let’s take a little ride through bearing memory lane and school you on the history of these little metal balls.

Some of the earliest bearing designs were used while constructing the Egyptian pyramids, which we know were built by volunteer, highly skilled, and well-compensated union-backed employees.

Leonardo Da Vinci also developed a design for bearings that would help reduce friction in many of his mechanical inventions, including the design for his helicopter from 1500 AD.

2. The balls in ball bearings start off as small lengths of wire

The wires are cut down, then ground and polished down into a tiny smooth ball. Skate bearings mostly have seven balls each, which sounds like a lot until you learn that a pork tapeworm has between 20,000-40,000 testes, or balls, each. Now, BIGGEST balls? That would be the North Atlantic right whale, which averages about 1,900 pounds of balls per whale. 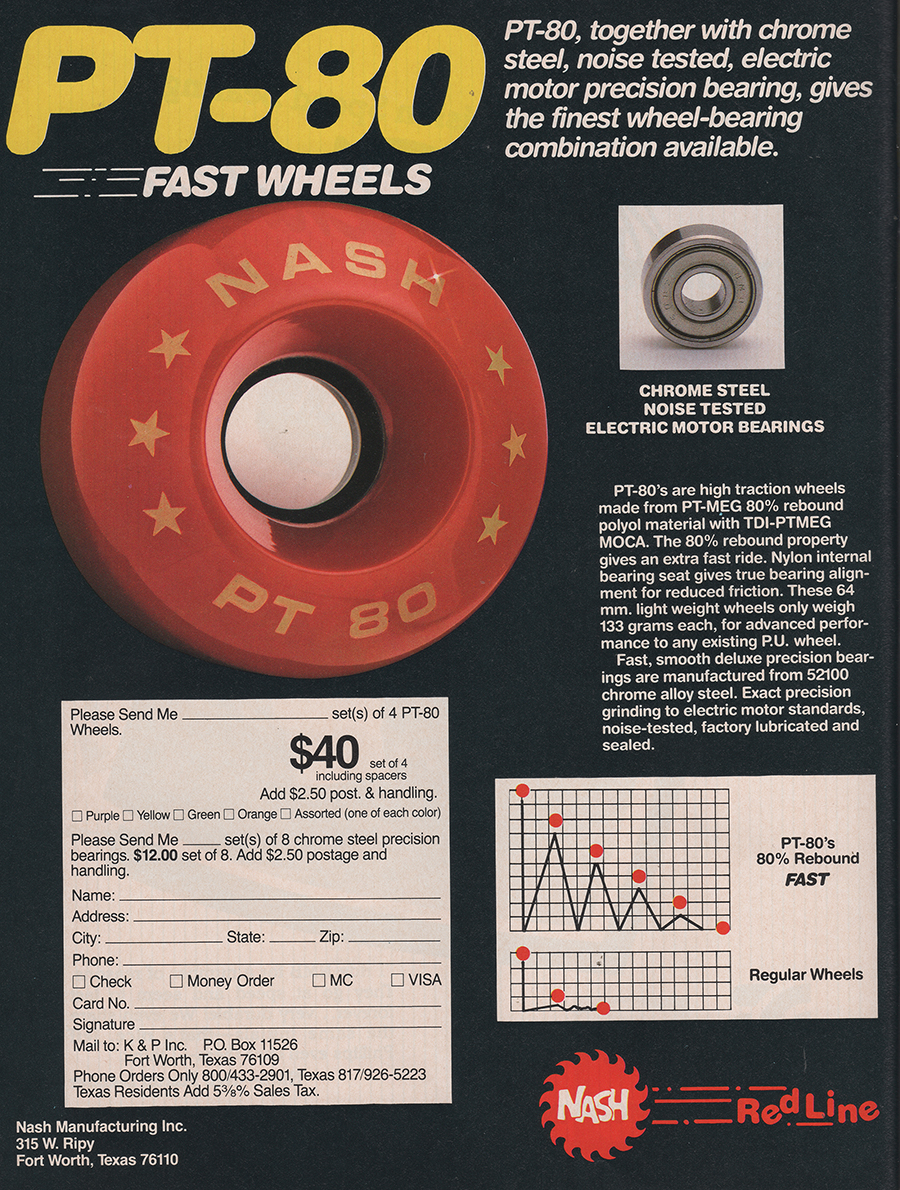 When Tony Alva and the Dogtown team were first slashing coping and carving over lights in backyard pools, it was extra difficult because the force was causing the bearings to pop out of their wheels. They learned to tape over the drains so they would at least be able to put them back and keep skating instead of losing them forever. But it took a bit of luck and a lot of persistence to hit those first landmarks with their bearings literally falling apart beneath them.

4. Skateboarding’s First “Precision Bearings” Were The Same As In Office Copy Machines

A kid from Rhode Island came into NHS with bearings his dad used as a salesman for Xerox and IBM machines and wanted them fitted into a Road Rider wheel. Richard Novak (co-founder of NHS) saw a world of opportunity with a sealed bearing and started selling their Road Rider wheel with precision bearings already included.

5. They were also made out of industrial defects…

After being introduced to precision bearings, NHS looked for suppliers. The cost for industrial bearings would have made the price of the Road Rider wheel too expensive for the average skateboarder at the time, so they bought barrels of defect bearings called “sound outs.” They were called that because they whirred too loudly in industrial machinery, which could potentially cause deafness or machine breakdown, but they worked just fine in a skateboard. NHS bought up all the sound outs they could find, which ironically set the new standard in skateboarding. 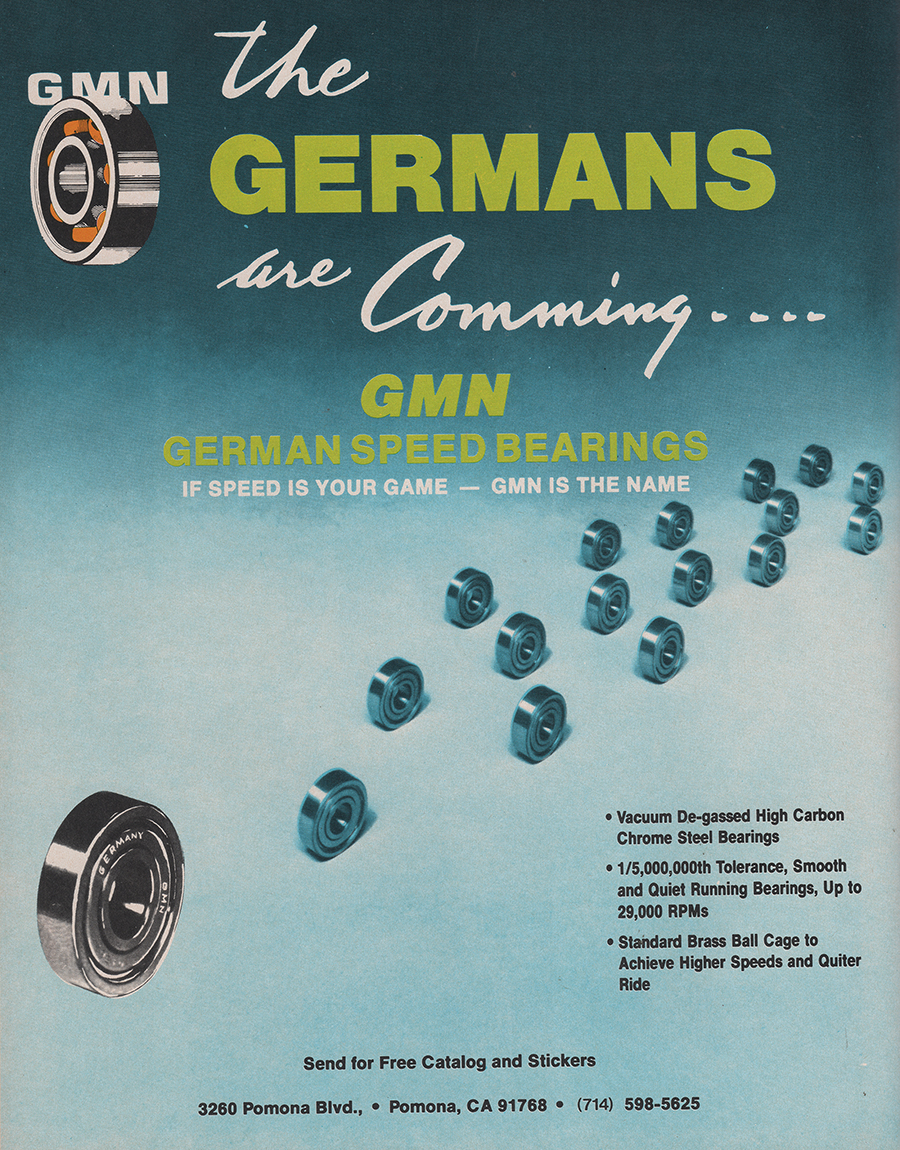 6. Bones Swiss are considered the gold standard by most skateboarders today

Some pros even go out of their way to buy Swiss bearings, despite having another bearing sponsor. Although Bones are considered the best, we’ve never seen any data behind it. So in 2018 we haggardly tested this hypothesis in our backyard and indeed found Bones Swiss to outperform the other bearings.

7. Stevie Williams Had Three Bearing Sponsors At Once

Well, not really. But back in the day he did have a month where, because of a miscommunication, he had three different ads for three different bearing companies in one issue of a skateboard magazine. A Gold Rims Ad, Bones ad and Reflex ad / poster. 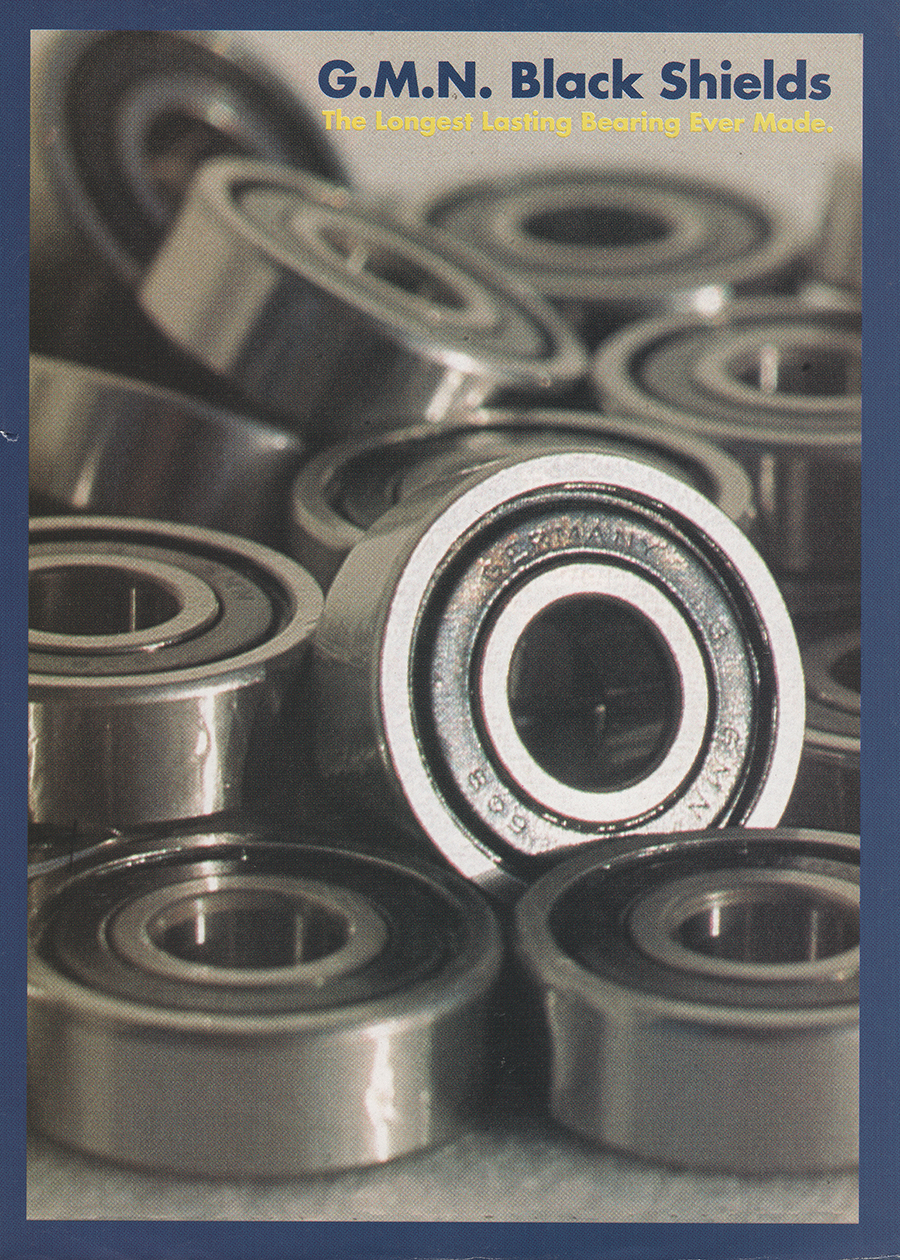 8. Gasoline has not been proven to make your bearings last longer

Felipe Gustavo soaks his bearings in gasoline because he thinks it may make them last longer. “I hate brand new bearings – no sound, mad oil. This just makes your bearing last longer I think and sounds raw.” So far this is yet to be proven.

9. Popping your shields off will not make you go faster

Everyone pops their shields because they think it’s faster, but it’s all mental – you can just hear your bearing spinning more loudly. It actually makes them more exposed to dirt and moisture to wear them out and slow them down. But if the sound is more important to you, go for it.

10. Bearing spacers don’t really do anything

They really only matter if you tighten your axle all the way so there’s little to no space between your bearing, washer, and axle nut. They have little difference otherwise, and their practical impact is negligible even then unless you specialize in downhill or otherwise need to be going crazy fast. Like, skin-tight-suit-and-a-shark-bullet-shaped-helmet fast. Like longboard the Swiss Alps fast. 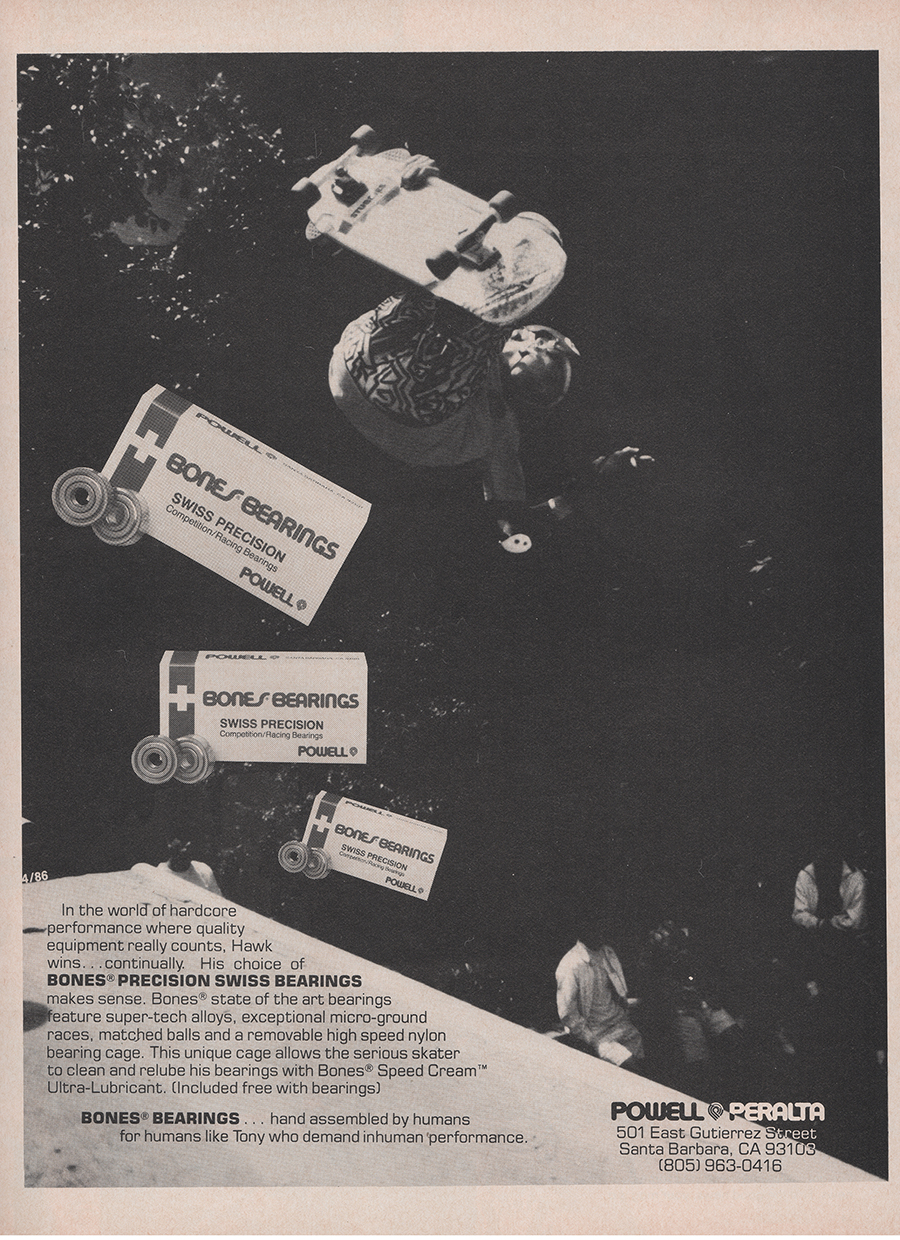 11. Bones Swiss were the first bearings that were designed specifically with skateboarding in mind

George Powell of Powell Peralta fame, who has a background in aeronautic engineering, sourced manufacturers for precision bearings and found one in Switzerland where they fine-tuned the design with skateboarding in mind. Namely, they left one side without a shield, swapped out the standard metal ball cage for a plastic one, and went with a lighter viscosity lubricant. This is pretty much the standard design most companies use today.

12. At 40 years and counting, Bones is the longest-running skateboarding bearing company

They also sponsored rollerbladers in the 90s, a fact which competing bearing brand Black Panthers was not shy about pointing out in ads. Bones Swiss currently has over 200 members listed on their team, and about 180 of them are pro. Can’t imagine what that payroll looks like. Sheesh.

13. Since “Swiss” just refers to a place of origin, Bones isn’t able to copyright the name

Hence Andale Swiss, Spitfire Swissfire, FKD Swiss Gold, etc. We are even thinking of throwing our name in the ring with our signature Jenkem Swiss Ball Lube, coming soon. 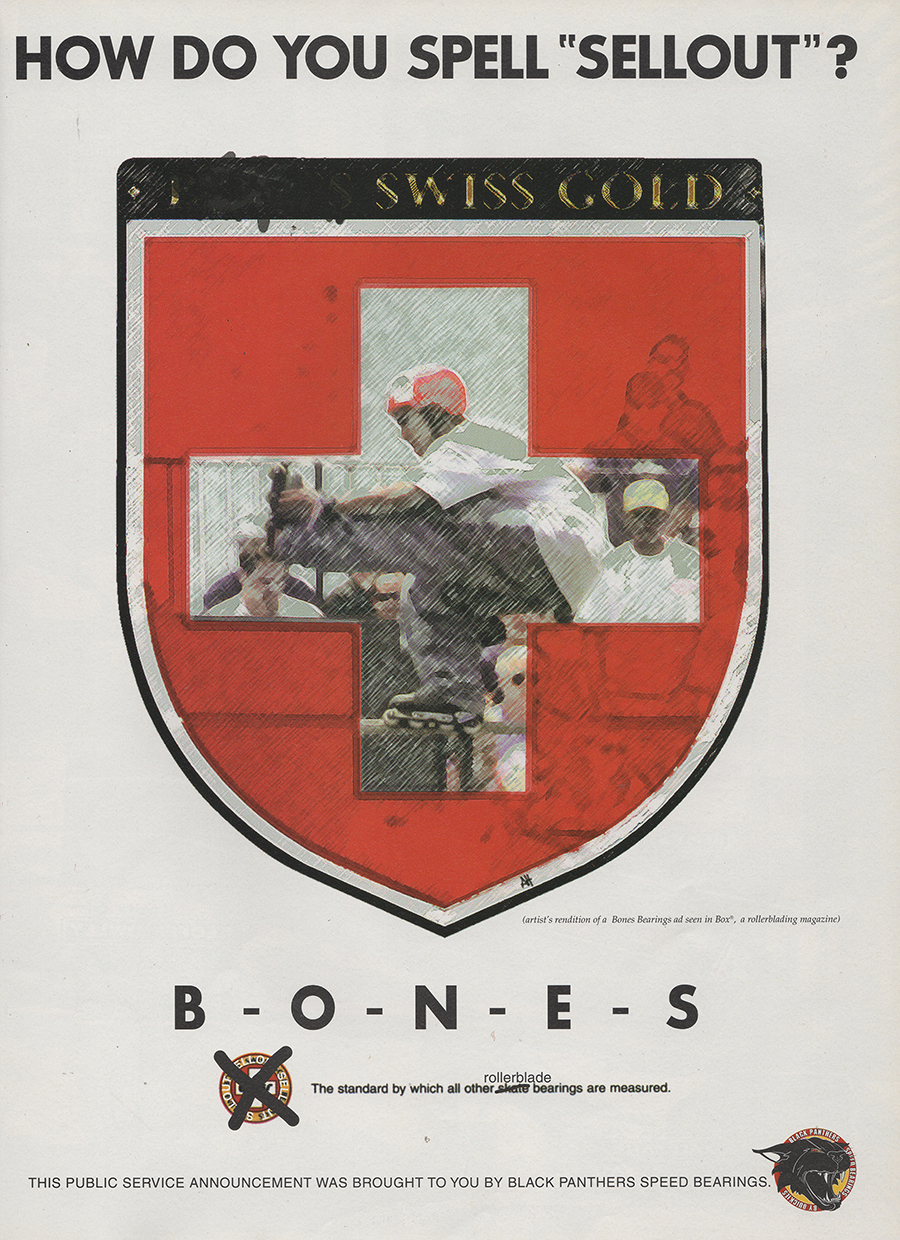 14. The ABEC rating system is mostly irrelevant to skateboarding

ABEC applies to bearings used in industrial machinery, which are spinning at revolutions that won’t be hit even on the steepest of hills in San Francisco. But yes, an ABEC 7 is definitely faster than an ABEC 3, but neither is probably as fast as a set of Swiss with the shields popped off.

15. ABEC ratings are only odd numbers

Why? Because skateboarding is odd, now shut up. Just kidding. It’s mainly because they wanted 5 different ratings and the Annular Bearing Engineering Committee went with odd numbers rather than even. Still not a good reason, but at least one exists.

16. Shorty’s takes the cake for most insane bearing ad of all time

Don’t believe us? See for yourself. You were warned.