A LOOK AT SOME OF THE SKETCHIEST SKATE VIDEO MOMENTS 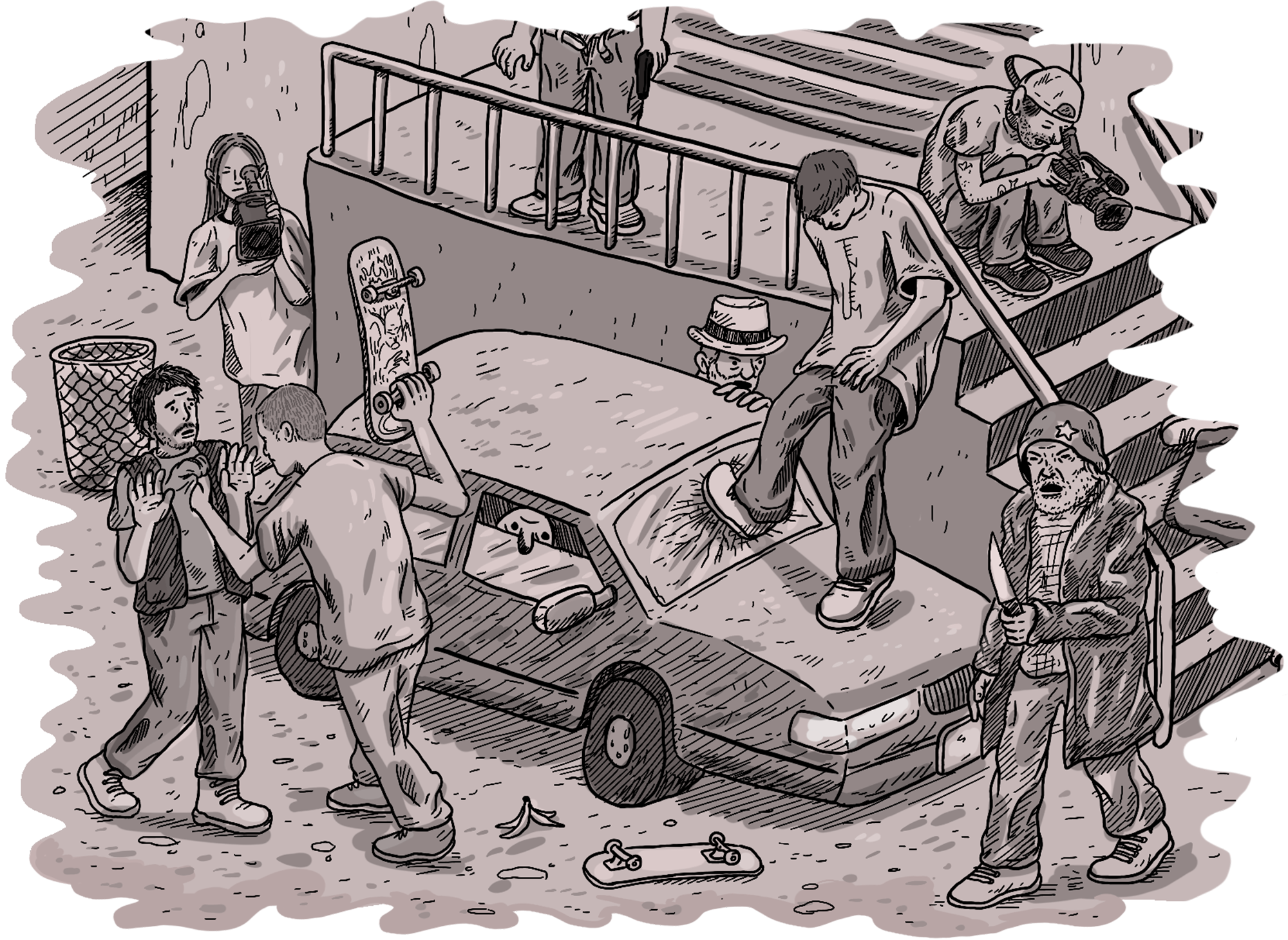 Skateboarders are street documentarians. It sounds kind of ridiculous but it’s easy to forget that very few groups of people spend as much time loitering in the streets as we do.  As a result, we’re going to run into more unpredictable and sometimes sketchy situations than the ordinary person and we end up catching most of these run-ins on camera.

Today many videos produced by bigger brands omit a lot of these encounters or water them down. As skateboarding continues to become more sportified and safe, we wanted to give a nod to the filmers, the skaters, and the civilians who have all played a part in documenting some of these wild split seconds that can occur in the streets.

Imagine getting hit by a car and landing it? I know it’s a Baker Maker but still, come on. Only skateboarders can make something so life-threatening look like a comical stunt in a movie. So please, if you’re not British royalty, look both ways or at least have someone watching the street.

This was one of those clips that transcended skateboarding for a few days. The clip makes it look like the guy throwing the planter was in the wrong, and originally, the general public gained some sympathy for skaters. However, when you really think about it, I wouldn’t be surprised if the sounds of Jarne’s board in this tight alleyway triggered some kind of D-Day style flashback in this old timer’s head. If so, they’re totally justified in my mind.

Parisian with a knife – Pussygangster (2016)

In public spaces like plazas, there are usually unspoken rules between the pedestrians and the skaters. 99% of the time we live together in harmony but that doesn’t mean there isn’t going to be some chaos every once in a while. The most jarring part of the video is watching these people stand around puffing their chest and calling the knife man’s bluff.

Americans are obsessed with the idea of property because it’s really the only thing American people have autonomy over. If you’ve never been to America and are going to skate in front of someone’s house there is at least a 50 percent chance you’ll run into a guy who acts exactly like this. I still can’t believe he didn’t fire one round into the air.

For a while, skate video intros felt pretty formulaic. There would always be some b-roll clips of the skaters, bail clips and a lot of over-editing. The intro to Ian Reid’s Sex, Hood, Skate, and Videotape has none of that and went the complete opposite route: peak mid-’00s shock factor. Although this isn’t the most insane part of the flick, “Shit got crazy” accurately sets the tone for the rest of the video.

I would pretty frustrated if a man in a sun hat and khaki shorts just punked me out and stole my board on film. I would try to do something over the top to compensate and putting your foot through a windshield is the next logical thing to focusing your board when you’re in a fit of rage. I really hope his friends clowned on him for getting beat up by a grandpa on his way to the golf course before giving him credit for the first try stomp.

After reading all of our reader-submitted stories about run-ins with Koston, I bet this guy didn’t even steal Koston’s wallet. He probably just asked him for his autograph or something. Regardless of what caused this Froston meltdown, this was the first time I realized that a skateboard could also be used as a weapon.

There a million different ways this clip could’ve ended up, and most of them would’ve been absolutely horrible to watch. Even though everybody in the video remained unscathed – besides that old woman’s heartrate – my butthole still clenches up every time I see this. Thinking about what that asshole’s leg would’ve been like if he actually clipped Sean Green‘s board haunts me.