WE SEARCHED FOR THE WORST SKATEBOARD RAP LYRICS 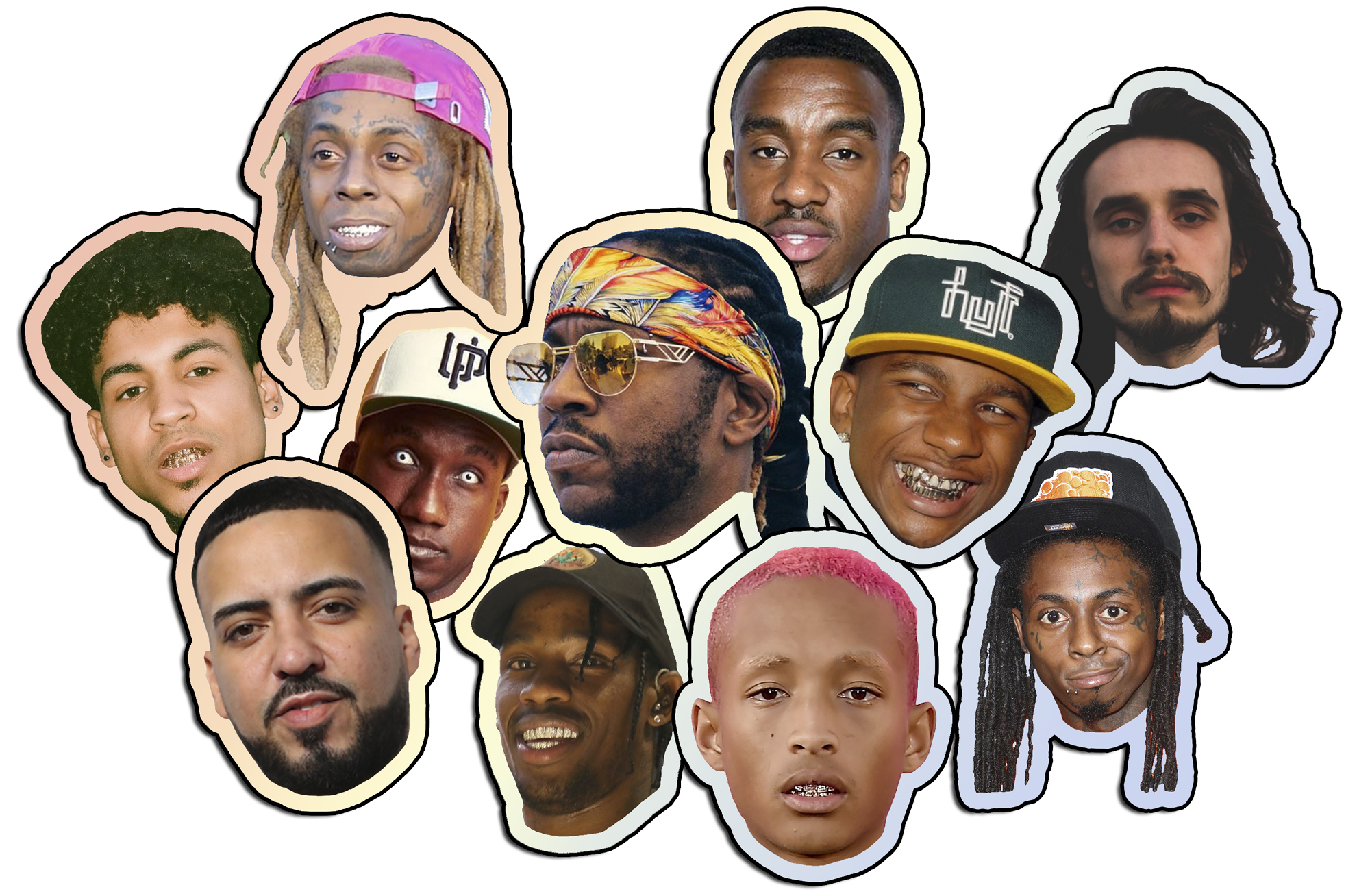 Rapping about skateboarding is never a good idea. Depending on how a rapper includes skate references in their songs, they either come off sounding like Chad Fernandez or someone who thinks Tony Hawk invented the skateboard. So to prove my point, I wanted to find some pretty bad examples of why skating and rapping should never be done simultaneously.

I started by digging through the Genius.com database and reading every skateboard reference I could find in rap songs. I looked at over 1,000 songs, picking out especially funny or nonsensical ones along the way, then whittled them down to the 10 dumbest, presented below in their full, stupid glory. 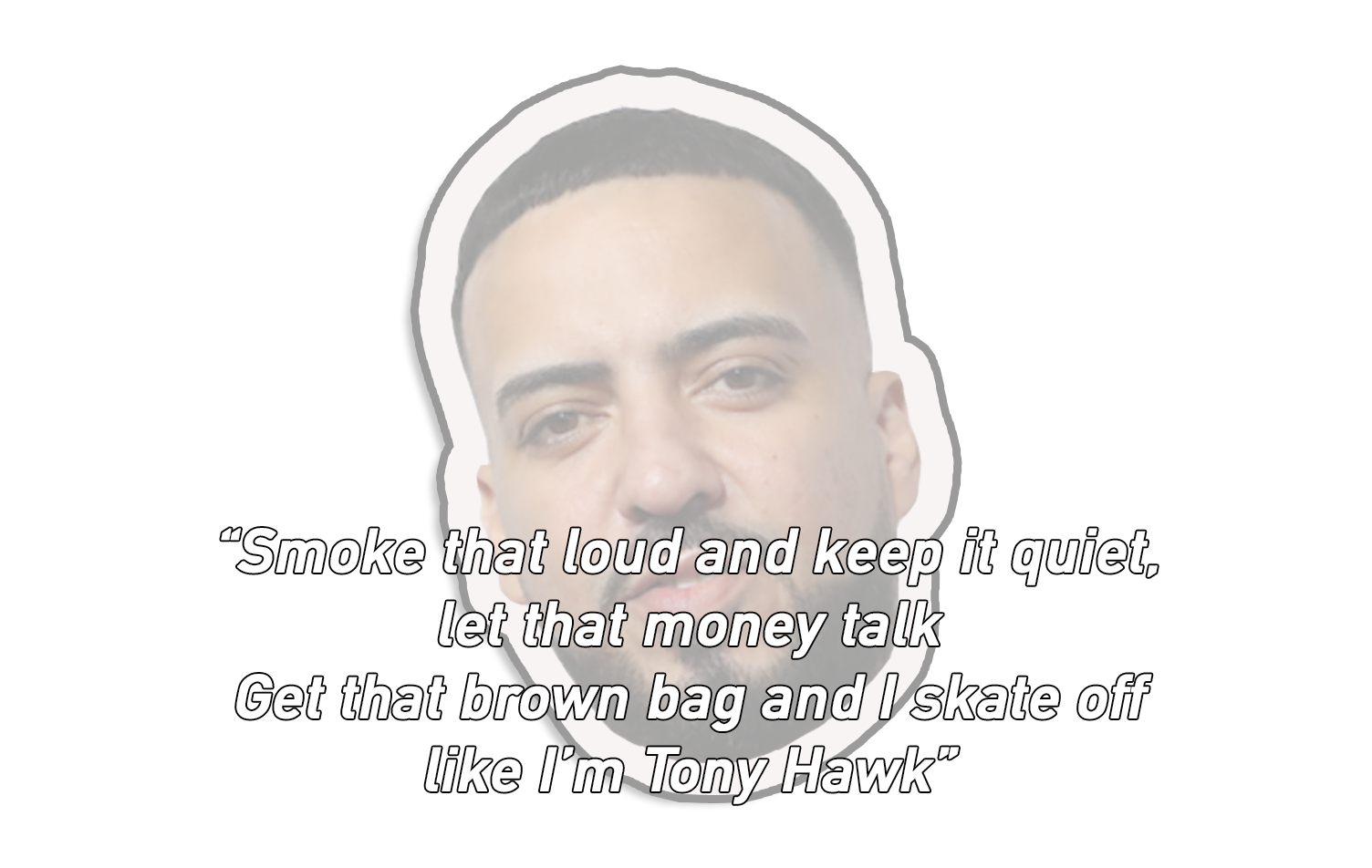 As you’d expect, Tony Hawk is the most commonly known skateboarder among rappers, and many have referenced him in a bunch of uninformed ways. But this one feels the worst because it does Tony a disservice, suggesting he’s only in it for the money and is ready to ditch skateboarders as soon as that check clears.

Sure, Tony’s done and will continue to do a variety of kooky endorsement deals, but at the end of the day, he’ll still show up at your local park and do inverts and 540s until his bones break. French, don’t shit talk the Hawk. 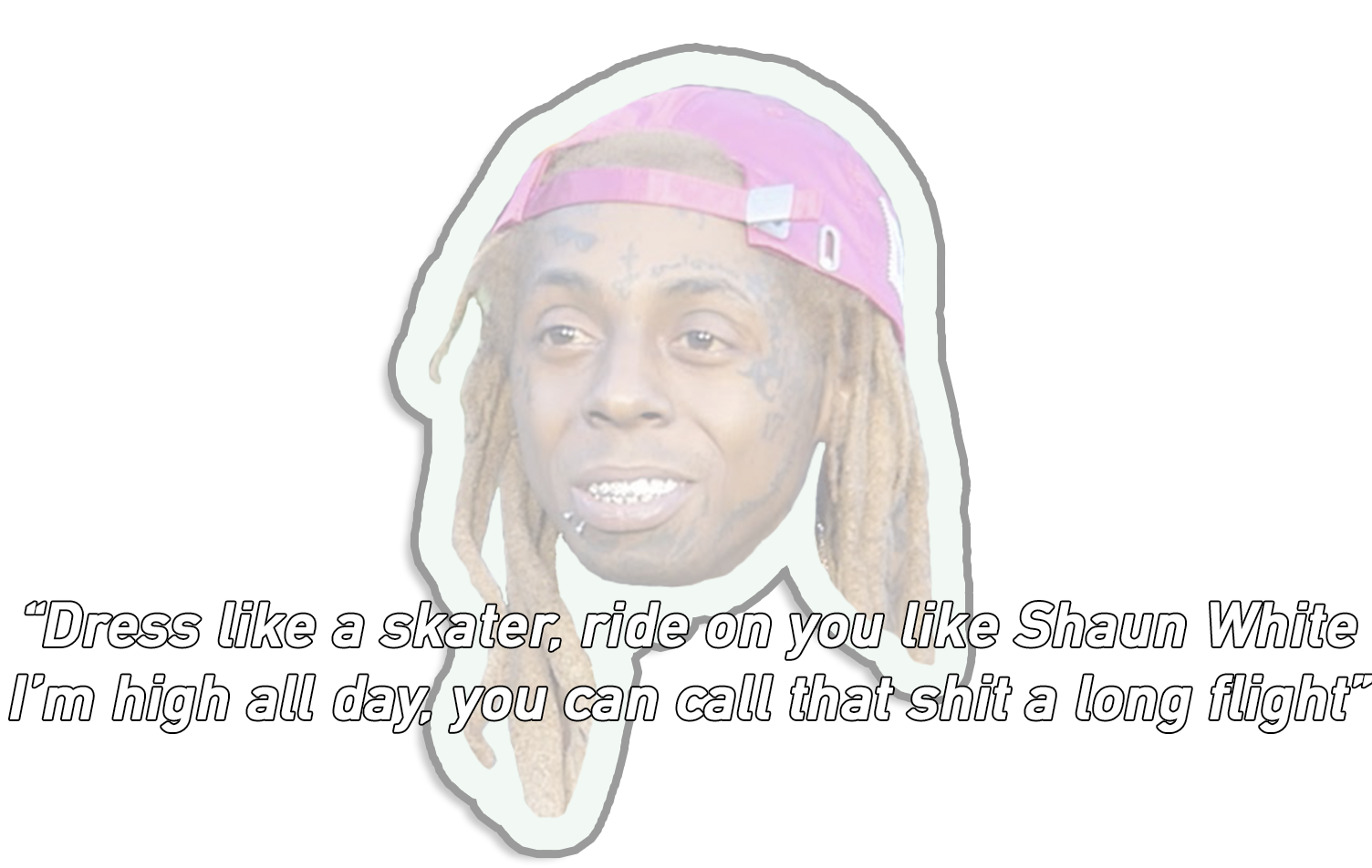 Wayne is openly telling on himself for being a poser with this Flying Tomato reference and by acknowledging that he only “dress[es] like a skater.” I kinda respect the honesty, but I can’t fully respect anyone who gives props to Shaun White. 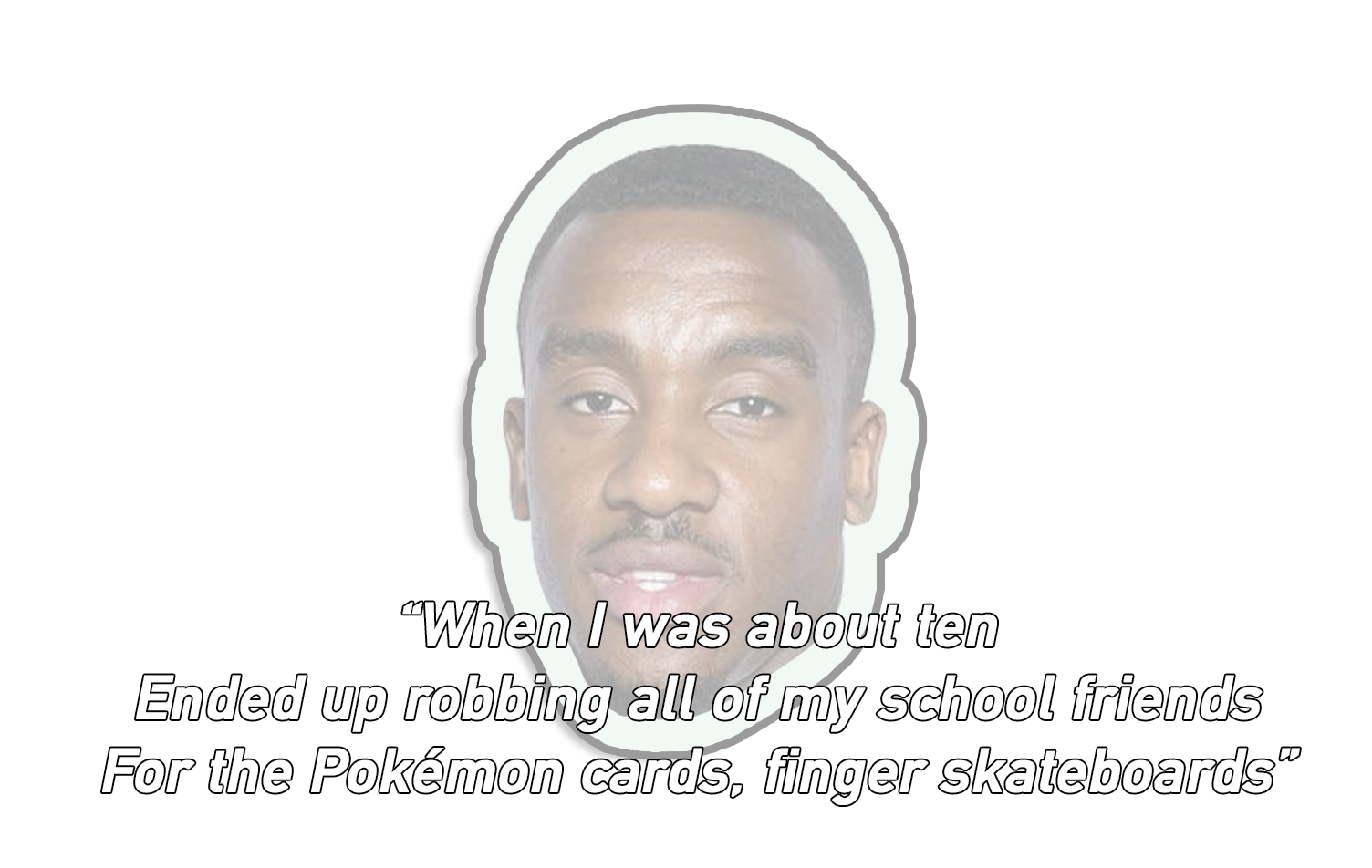 This rapper is British, which is important for comprehending how he could even rhyme “Pokémon cards” with “finger skateboards.” But that doesn’t make up for this being one of the least cool ways to begin a rap song. Bragging about stealing Tech Decks? Sounds like a badmon! 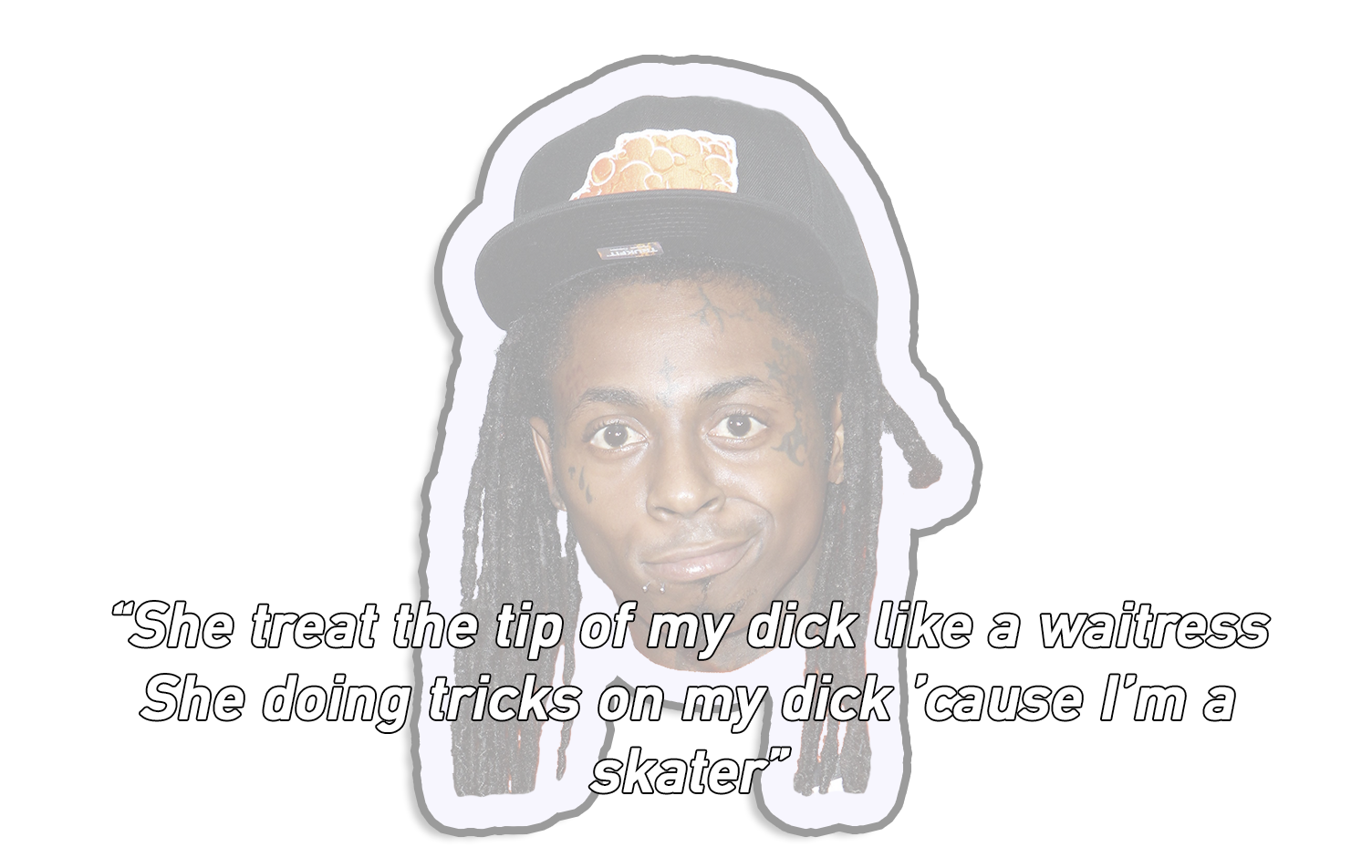 This one makes me seriously question Lil Wayne’s basic understanding of skateboarding. It’s fine if he likes women stepping on his penis with their feet, no foot play shaming over here, but the wordplay here feels too forced. Also, Lil Wayne should know that no women want to hook up with him because he skates. Everyone knows that skateboarder fetishism is out and old-timey construction worker fetishism is in. 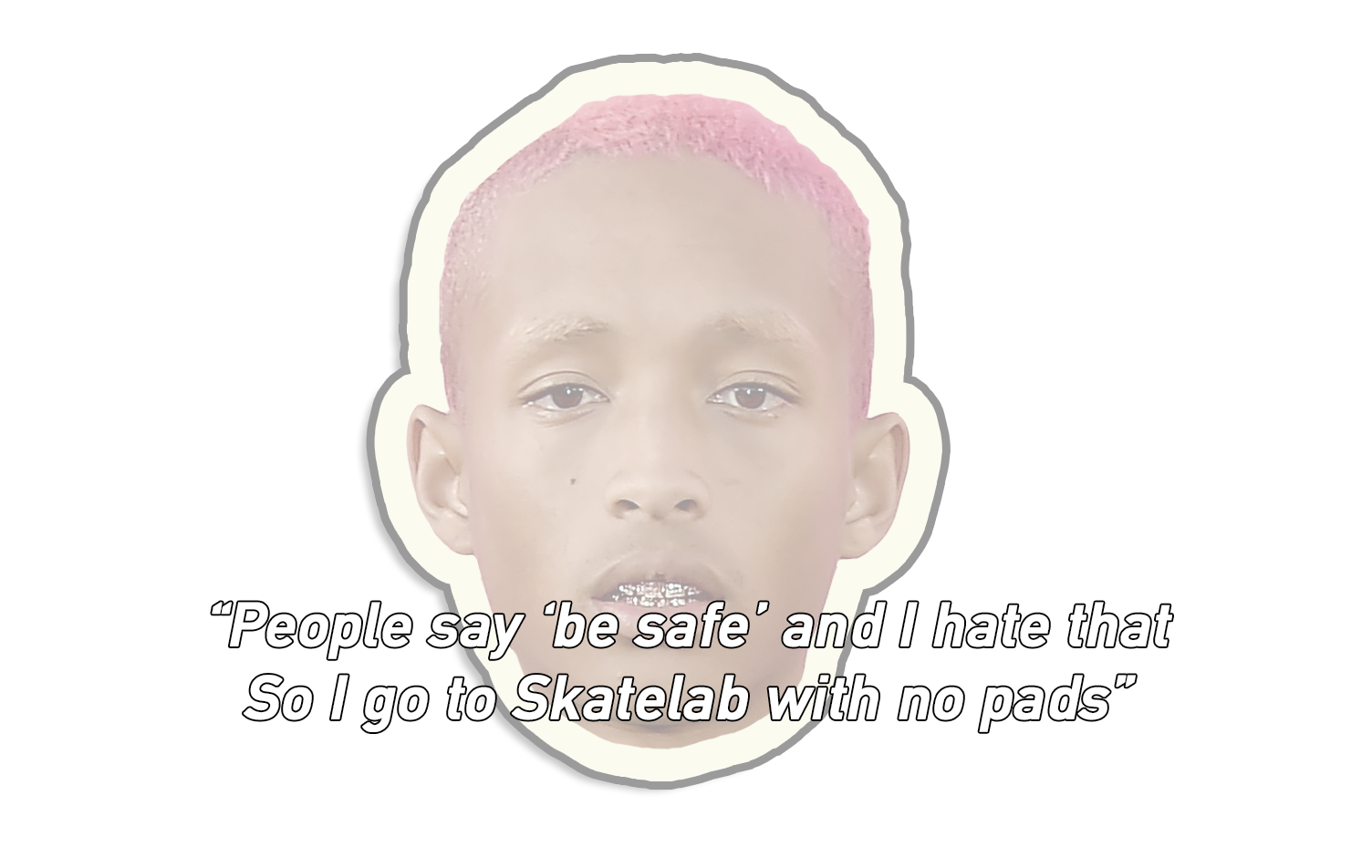 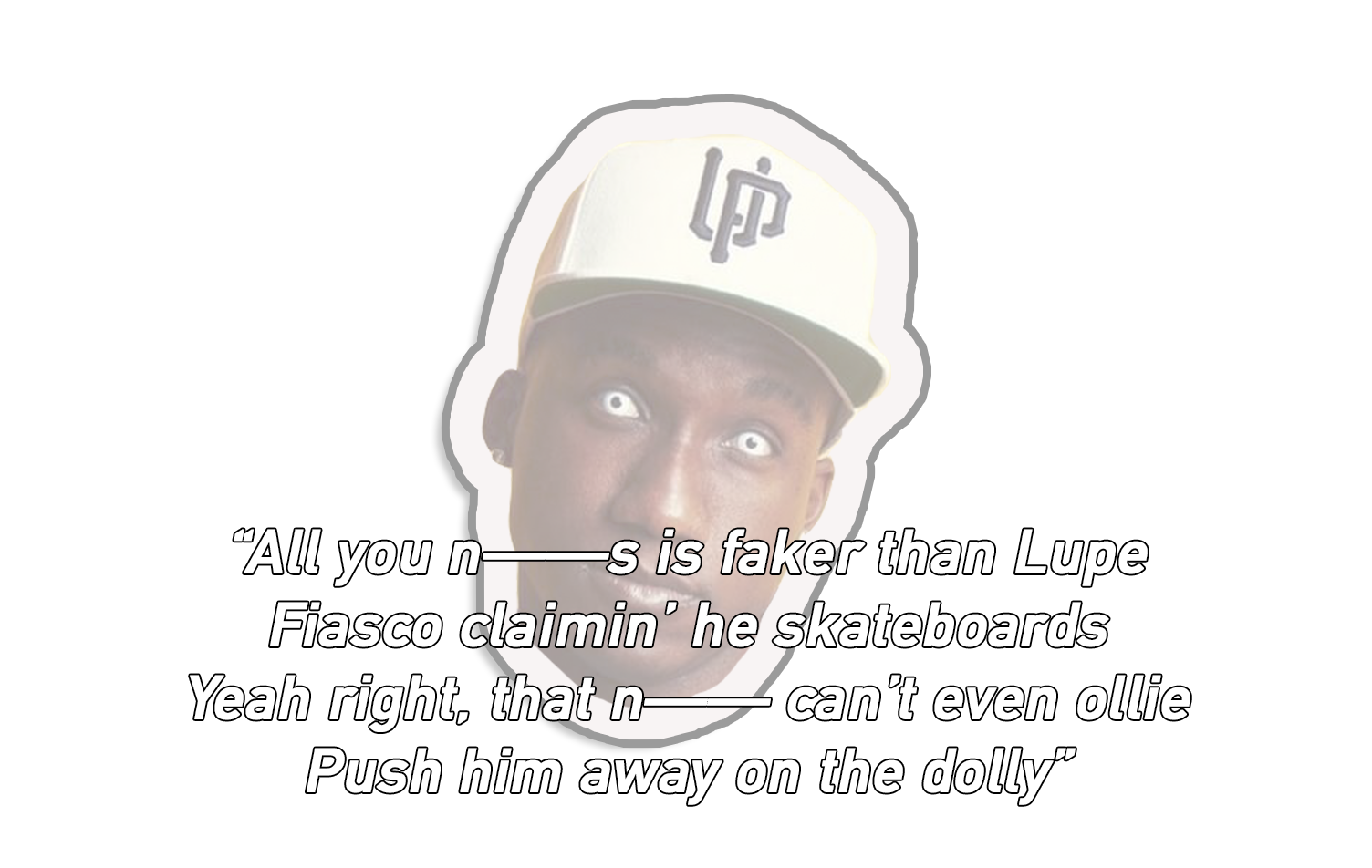 This one actually isn’t dumb at all. It’s pretty great, so I put it here as a sort of mental intermission. Rappers bragging about skating is bad, but rappers calling out other rappers for not being any good at skating is the best. 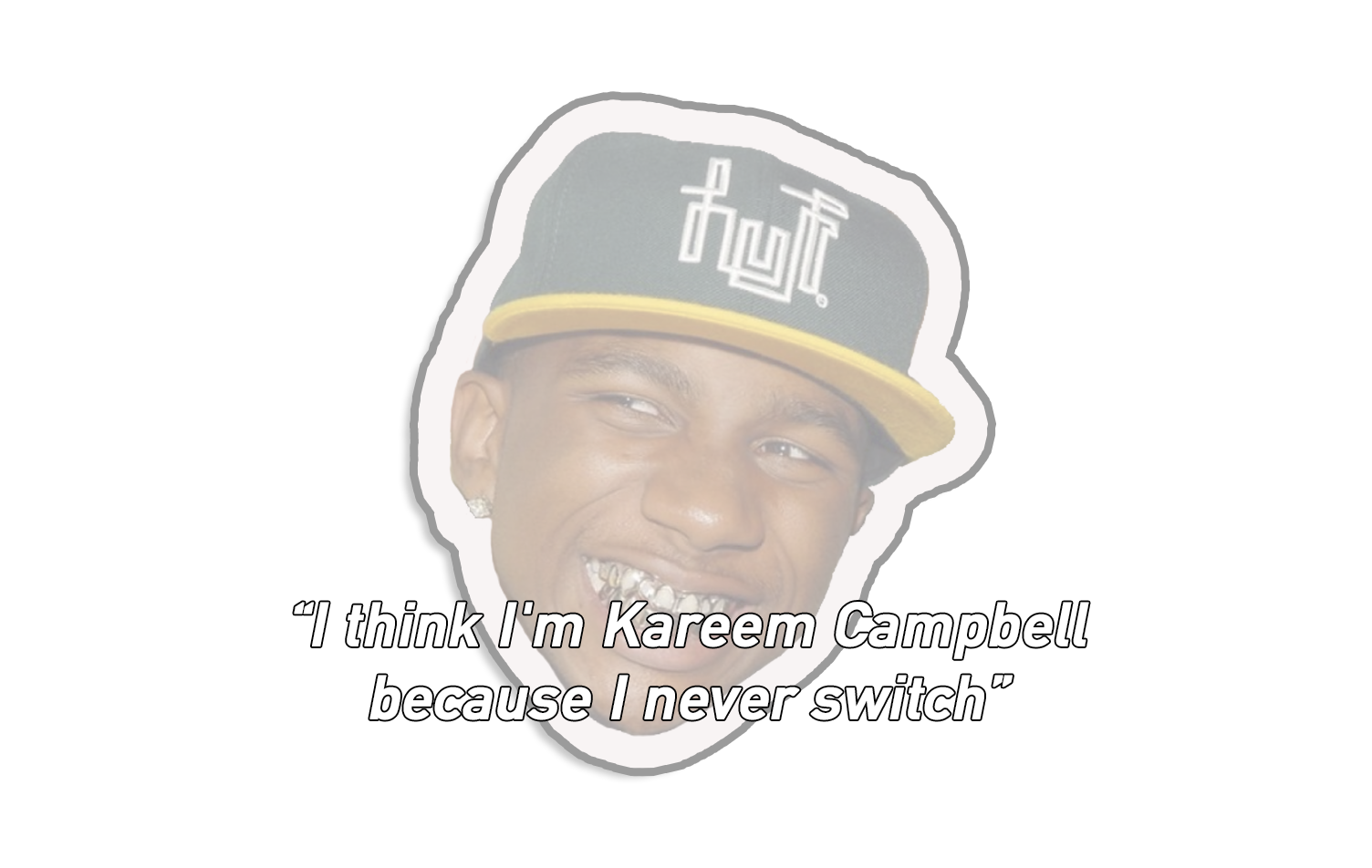 Sorry, Lil B. Better off watching some Brandon Westgate clips if you really never want to see switch skating. 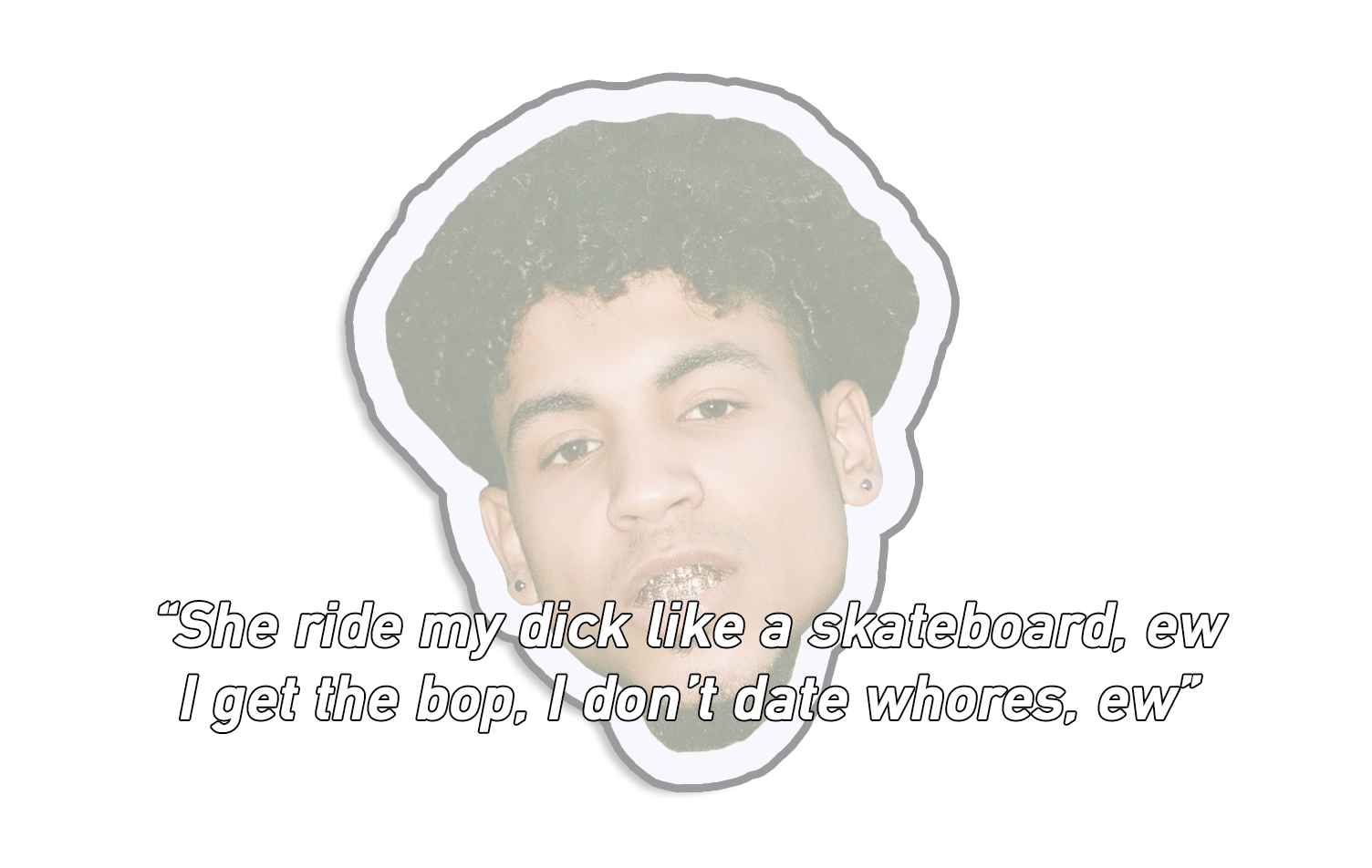 This is the pinnacle bad analogy, the crown jewel of ignorant skateboard references.

We all — men, women, and children — want our metaphorical dicks ridden. But ridden like a skateboard? Covered in griptape? Punctured with steel bolts? Slammed onto the asphalt? Nah. 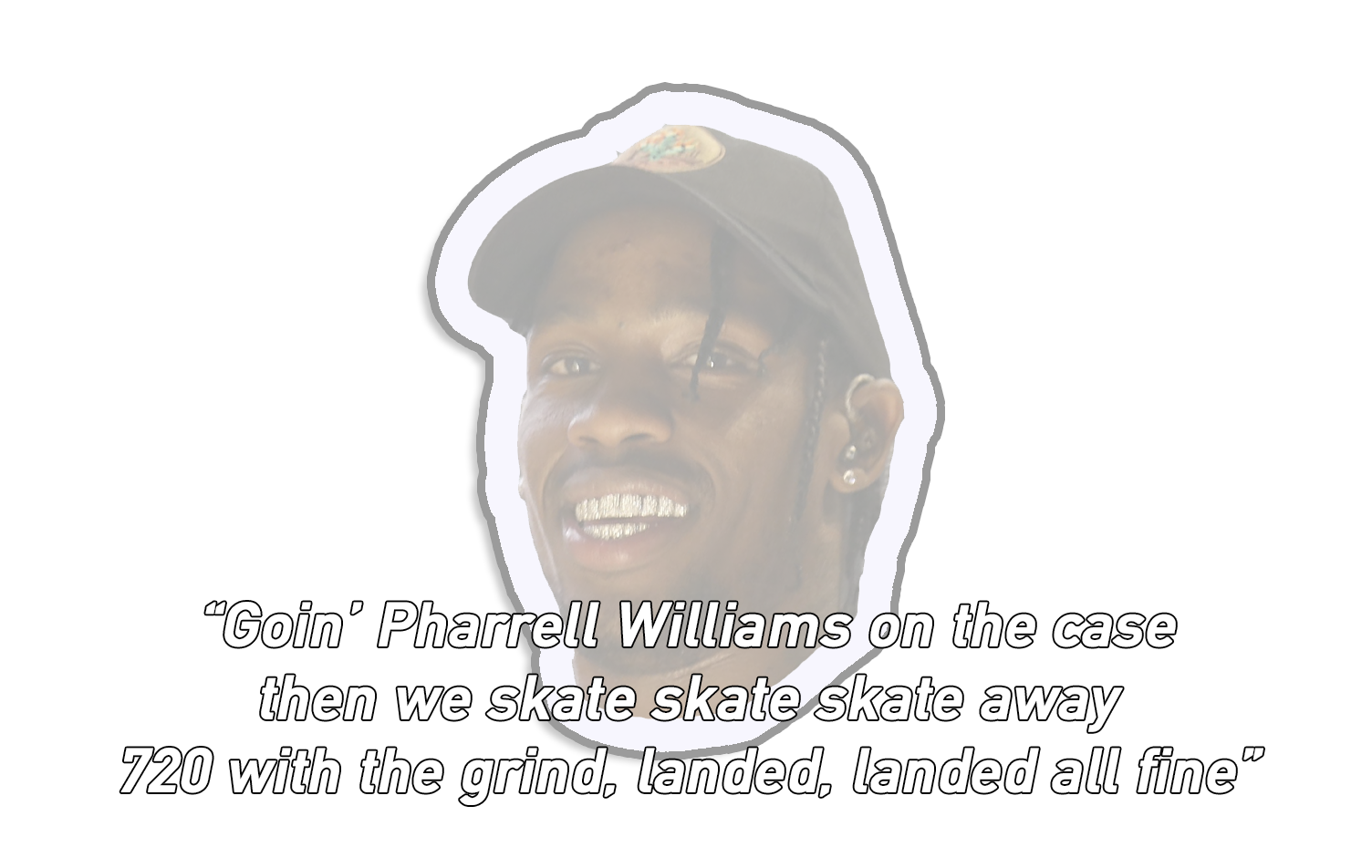 This would be sick if it was a sincere vert reference, because I’m pretty sure no one has ever landed a 720° to grind, but since it’s clearly a braindead thought from someone who’s only exposure to skateboarding is by playing video games, it just comes out sounding stupid. 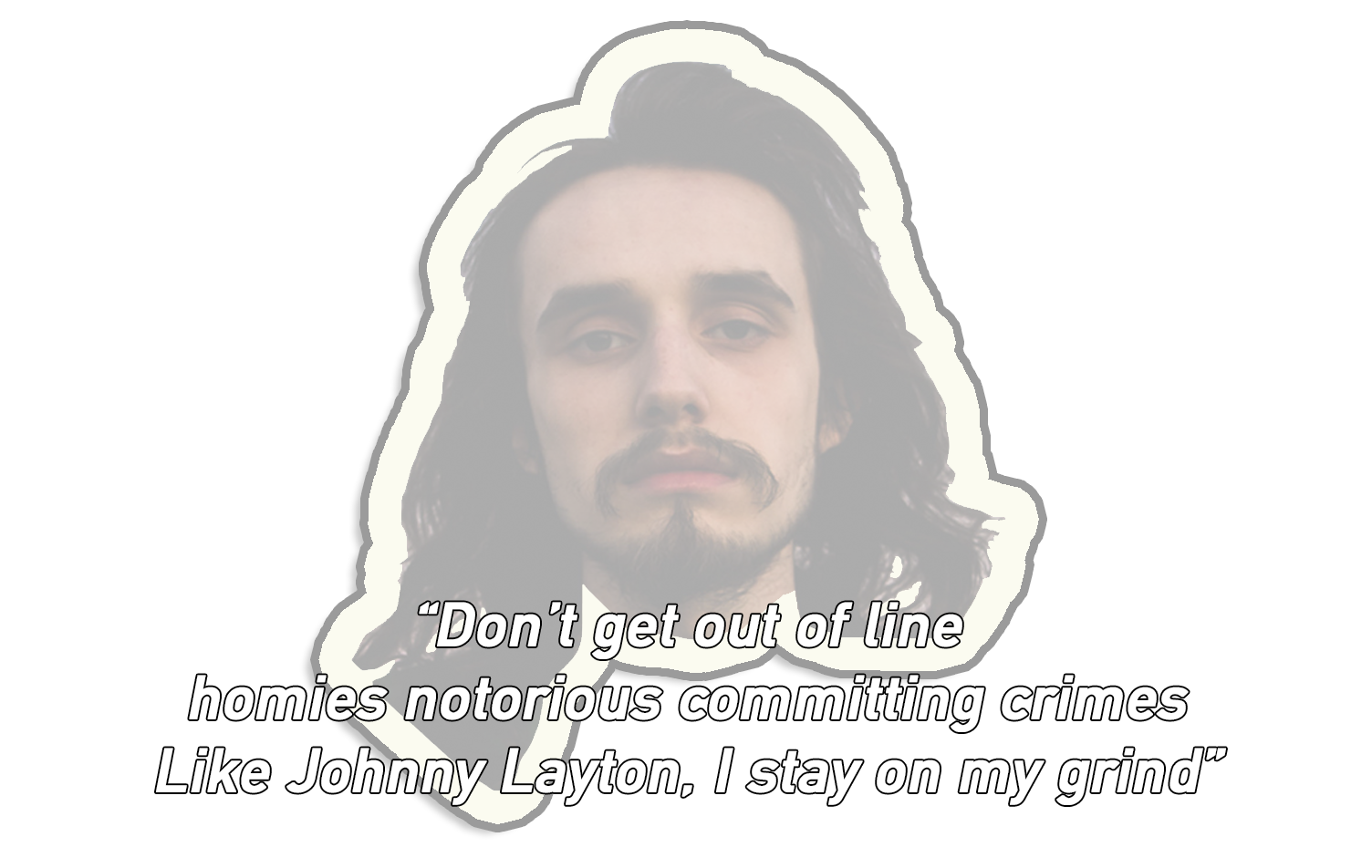 There were many “stay on my grind” lines to pick from, but this one with the Johnny Layton throwback reference was the most nonsensical. Not sure if this guy’s also a fan of Johnny’s “self portraits”, but he’s definitely inadvertently sent one of his rapper homies a dick pic of his lil’ thuggy penis at least once.