THE MOST EMBARASSING FASHION RIP OFFS OF SKATEBOARDING 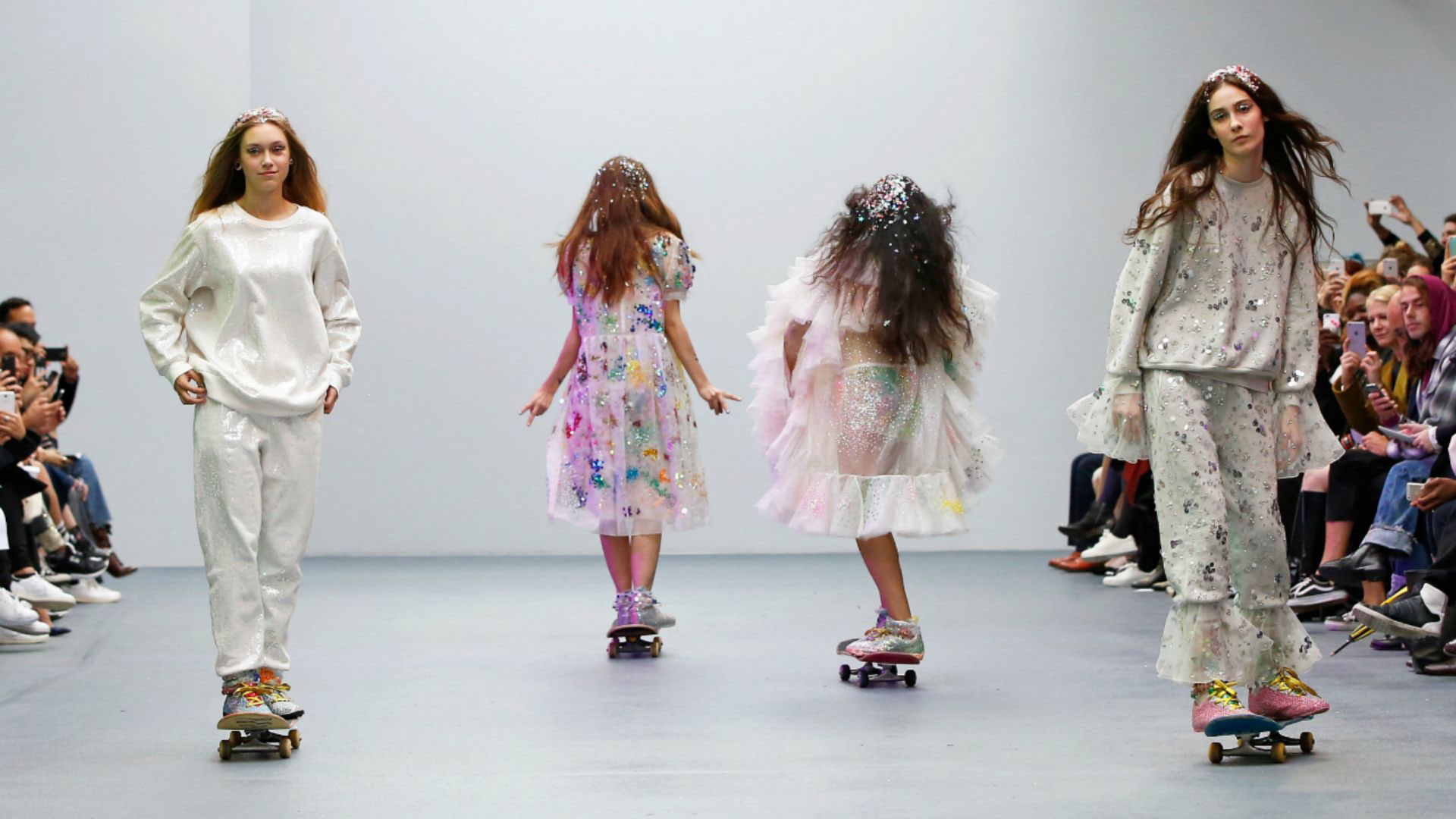 For whatever reason, the fashion industry is all in on skating right now. Whether it’s through “flipping” an iconic skate graphic, or transforming runways and showrooms into “skate parks,” we’ve seen so many high end labels, both up-and-coming and long-established, sneaking skateboarding into their brand aesthetics and usually coming off as horribly inauthentic and incredibly try-hard in the process.

It’s not as if skateboarders are totally oblivious to the uneven relationship, and it’s probably safe to say that the skate industry has even been complicit in encouraging this dynamic. But the extent to which skateboarding has been co-opted by the fashion world has gotten to the point where it’s laughable. Skating’s influence can be seen in literally every category of apparel and accessories, and perhaps the most baffling part about it is that most people creating and consuming these goods are not even aware of how off the mark these attempts are. We’ve taken note over the past few months and years to put together some of the most embarrassing examples of high fashion knocking off skateboarding. 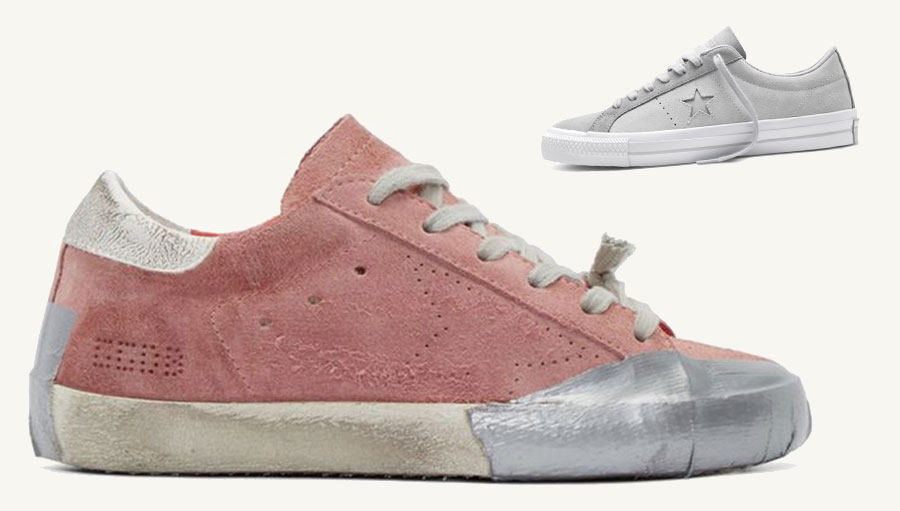 golden goose rips up and off cons

Golden Goose is pretty much known for taking hand crafted, high-end Italian leather sneakers, then scuffing them and putting them up for sale in some of the most exclusive shops and boutiques in the world for 500+ dollars. This particular pair stands out from the rest of their catalog because of how they were purposely destroyed to make it look like you can effortlessly skate in both stances like you’re P. Rod or Mark Suciu. The laces come pre-ripped, the kickflip and ollie areas are worn down, and there’s even duct tape on the heels making it look like you’ve shredded the shoes so hard they’re barely holding on for dear life, right out of the box. 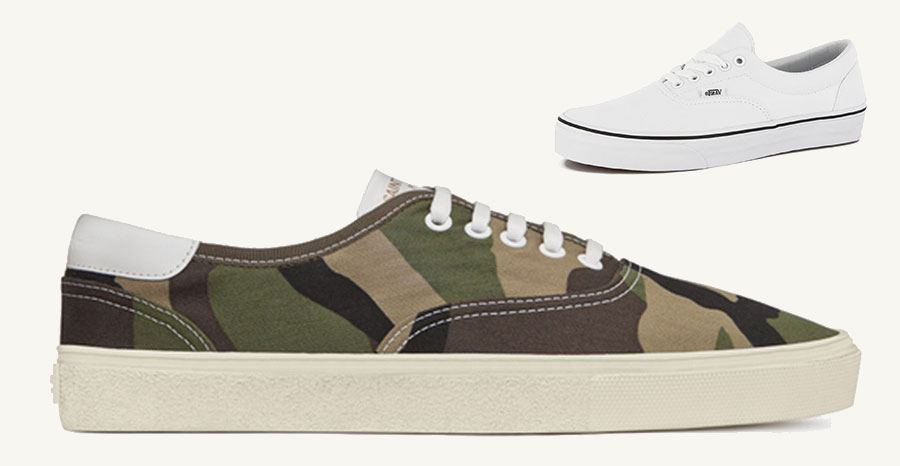 In an effort to create an aesthetic that stays true to its Parisian roots while drawing from Southern California rock, surf, and skate culture, SLP decided that it would be a good idea to make a $400 pair of Vans Eras and sell them to oblivious fashion heads across the world.

Why anybody would shell out the $400 dollars for these is beyond me. You can walk into any shoe store in any mall and grab a pair of camo Vans for one tenth of the price, and nobody would really be able to tell the difference. There’s no reason these shoes should even be this expensive to begin with. It’s not like the rubber used on the sole is that much better than Vans’ waffle sole, or that the canvas is any stronger or more durable. Even if these are hand crafted somewhere by some flaxen-haired maiden in Europe, anyone paying over $60 for a pair of shoes like this deserves a swift kick to the groin. 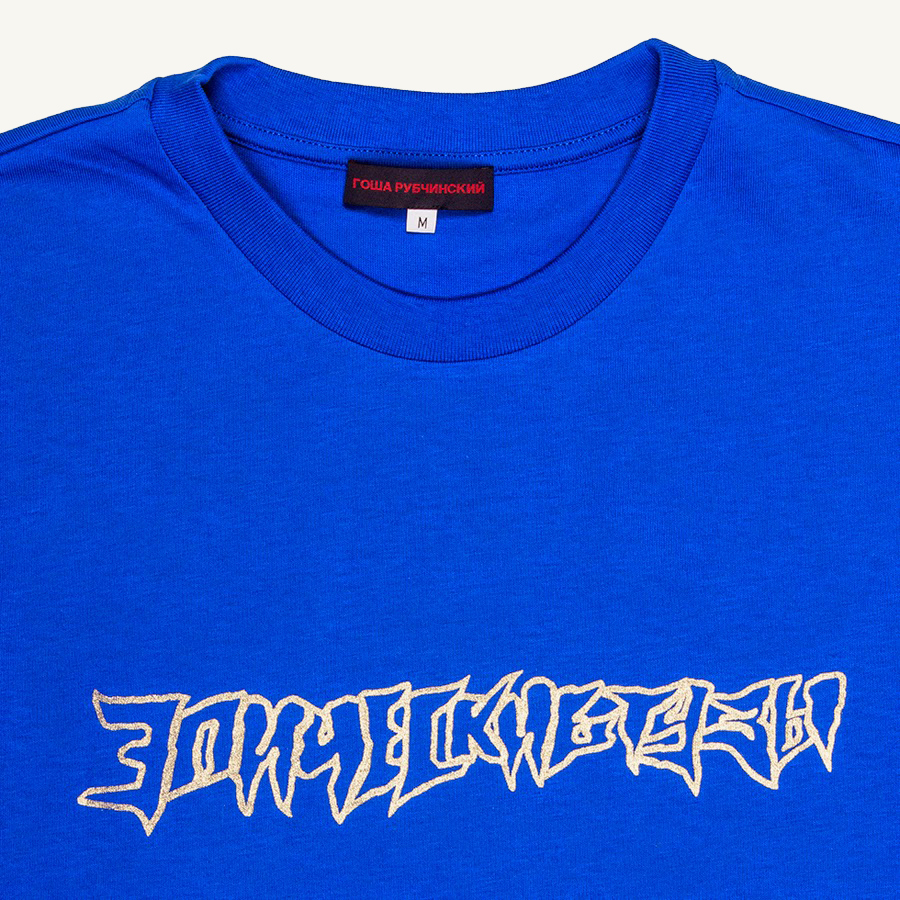 Gosha Rubchinskiy is a designer who has constantly been praised and hailed for “having his finger on the pulse of youth culture.” If that sounds incredibly pretentious, that’s because it is. All it translates to is that he and his team go on Tumblr a lot and hang out at the skate parks in Moscow scouting for “new talent and muses,” not unlike creepy pedophiles.

For one of his earliest collections, and arguably the one that first got Gosha the recognition he has now, he basically just ripped off Fucking Awesome’s logo merch, replacing FA’s branding with the words “Epic Aces”—which is basically an indirect translation of “Fucking Awesome”—spelled out in Russian Cyrillic. He printed it in gold foil across the chest of crewnecks, along the sides of longsleeves, on the front of beanies, on sweats, you name it. Sick! 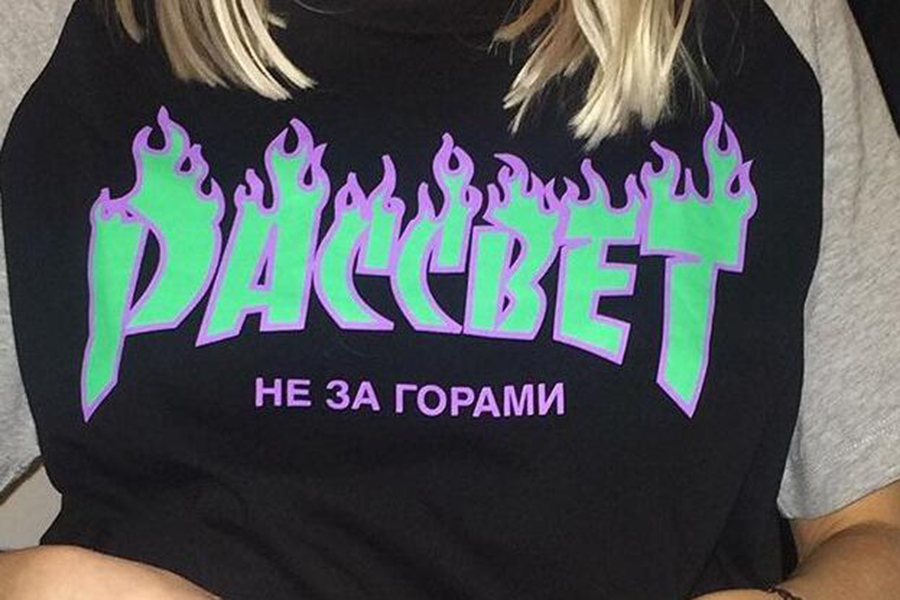 In 2012, a few seasons ahead of releasing his FA knockoffs, Gosha also bit off Thrasher’s iconic flame arch logo. Instead of writing his own name in burning letters though, he went ahead and replaced “Thrasher” with “Paccbet,” which means “dawn” in Russian. The shirt was later seen at Fashion Weeks across the world and on the backs of numerous celebrities once his brand gained steam.

The only thing I’m left wondering is how in the world Thrasher never filed a cease and desist for these, or even acknowledged them in a witty, back-handed IG post or something. I’m sure there are tons of other Thrasher knockoffs in existence, but this one was by far the most popular one. 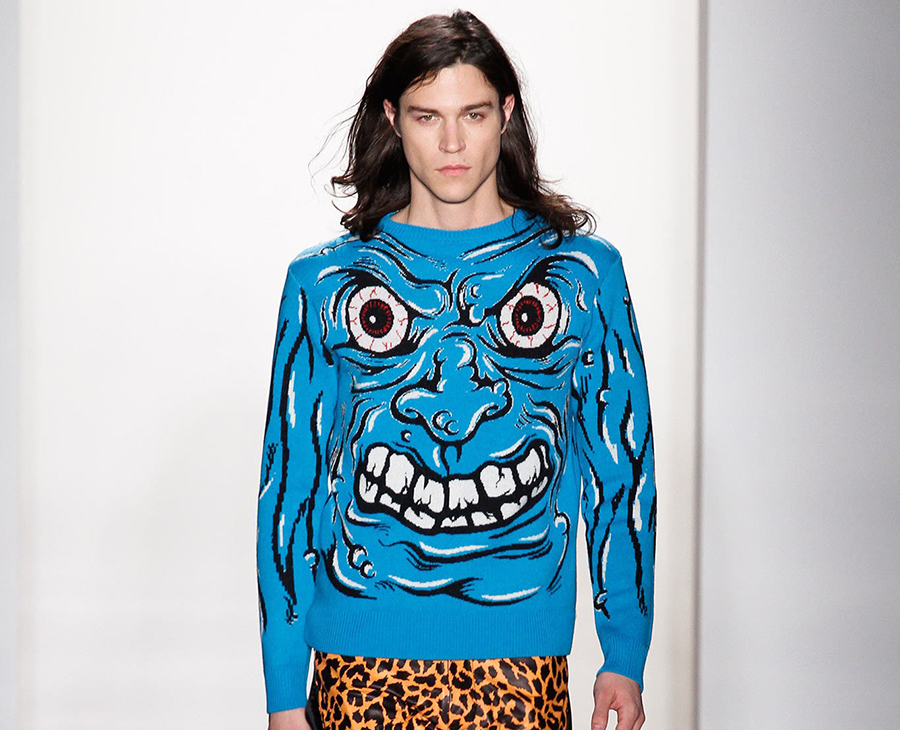 Not everyone in fashion has gotten away with their blatant rip offs of skateboarding. Sometimes the OGs will clap back and call you out, and Jeremy Scott found that out the hard way. He decided to send a bunch of ripoffs of Jim Phillips iconic work for Santa Cruz down the runway in Paris a few years back, placing his artwork across the front of a number of different knit sweaters. The work was not authorized at all by anyone at NHS, and once they caught wind of what Scott had done, they immediately hit him with a lawsuit. As a result, Scott was forced to cease any sort of production plans he had for these particular designs and had to recall any existing versions that were already out. 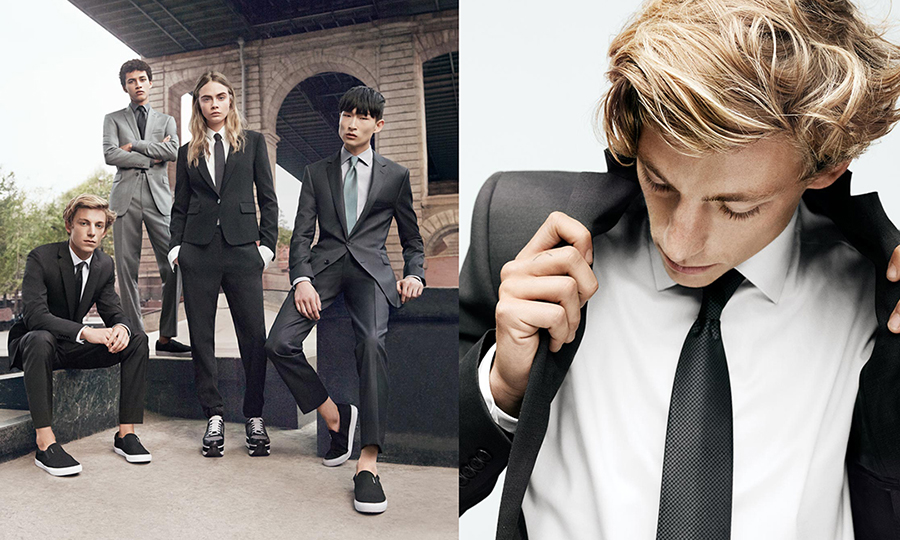 We let DKNY slide before when everyone’s favorite handsome skater turned part-time model, Dylan Rieder, posed in a leather jacket in Times Square alongside supermodel Cara Delevigne and rap star ASAP Rocky. But who thought it was a good idea to shoot a line of suits at the grimiest skate park in New York? “Hey, let’s just showcase the peak of formalwear in the least appropriate place for someone to wear it!” There’s literally puddles of hobo piss in the back corner of the park 24/7, just steps away from where these guys are all posing. I’m all for juxtaposition or whatever in the name of “art,” but c’mon. 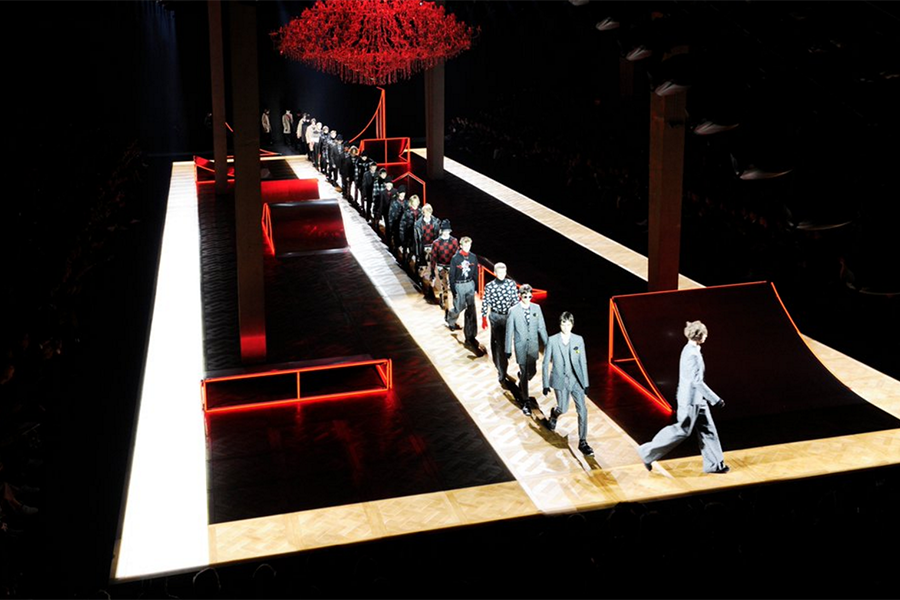 Even in a time where everything is Huf socks and Thrasher hoodies in fashion, one of the last brands expected to follow suit was Dior, and immediately after their Fall/Winter 2016 show, they were praised for producing a “winning, and very youthful combination.”

Jumpramp to polesmash? Kicker with no run up? LED lights? It’s like Dior picked the worst skatepark in Certified Piece of Suck and made it their runway. 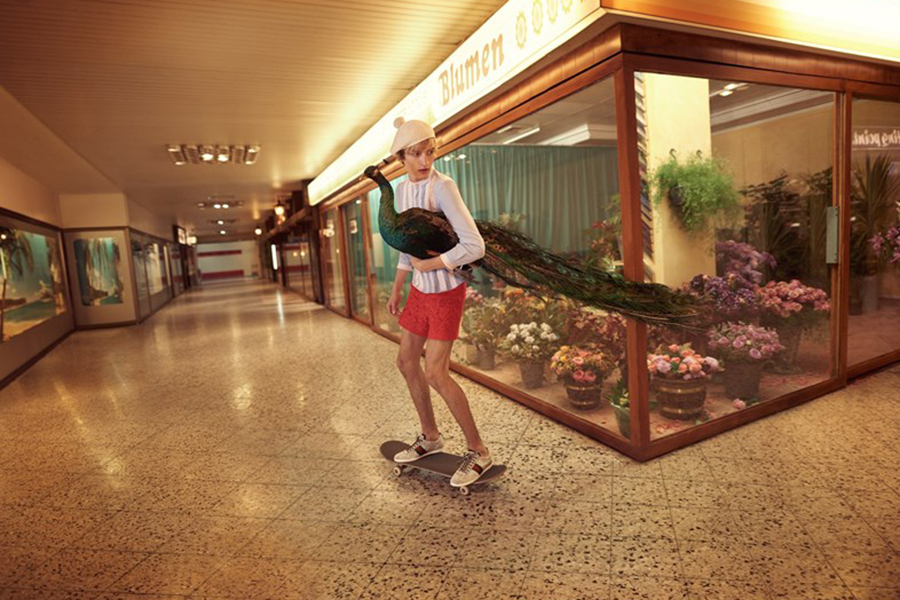 It makes sense for start up brands like Gosha to try to piggy back off the trendiness of skating to make a name for themselves, but why Gucci would take that route is beyond me. Everyone knows Gucci already and that’s without skateboarding involved. Whether we’re focusing on the pasty pale white guy skating thru a mall while holding a peacock, or the fact that this video effectively tarnishes Marc Johnson’s Fully Flared part by being set to “Goodbye Horses,” everything about this is just awkward.

Once a revered, 120+ year old fashion publication co-opts the culture centered around a useless wooden toy to get more clicks for their website, you know we’re finally peering through the looking glass. Vogue.com’s week-long foray into skate content was predictably ridiculous, filled with writers talking about “flip kicks” and l*ngb**rds.

I think skaters should just put an end to all of this shit by trolling the fashion world and reverting back to the lamest of the lame styles. We should all go back to rocking ridiculously baggy pants, shoes that could survive a gunshot, and bright yellow graphic T-shirts. I hear that Osiris is re-issuing the notorious D3, so we might be able to actually make this happen.