WE HAD THE INTERN REVIEW OUR LUNCHES 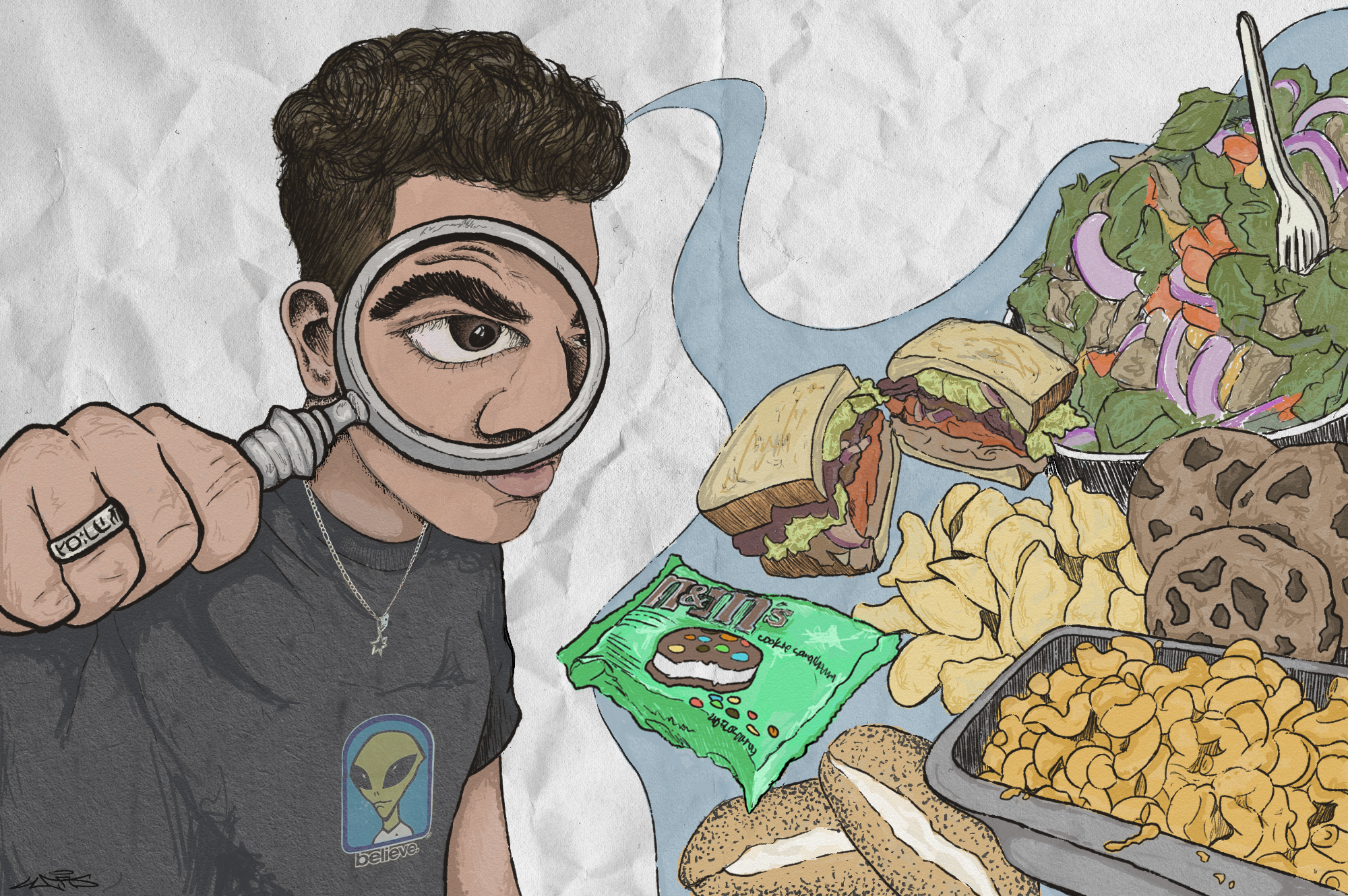 Lunch is an essential part of any day. Interestingly enough, you need to eat it to survive and since it is the only meal that is eaten together at the office, a sense of camaraderie has developed around it. At Jenk HQ, we recommend to each other what to order, we watch skate videos together during our lunch break, and we even share our snacks like we’re in middle school.

However, our overly opinionated intern, Justin, often has a lot to say about what we eat for lunch. Somehow, we always manage to order the wrong thing and his lunch is just oh so perfect. He doesn’t seem to realize that we no longer have the metabolism of a teenager so we can’t survive on a diet of carbs and grease like him.

So, since work has been getting slow for him around the office, we tasked him with reviewing our lunches so that you could all see exactly what we are up against here.

This is a great-looking lunch. Chicken, rice, plantains, and mac & cheese. It’s definitely something I’ve had many times before. The rice will fill you up, the chicken will you give you some good protein, the mac & cheese plays into your glutenous human nature, and the plantain helps you finish off with something sweet but not too unhealthy.

However, Alexis let me know that these are actually his leftovers and I have many problems with the idea of leftovers. Firstly, whenever I go to restaurants, I make sure to finish my food. That is the food I ordered and so that is the food I shall eat. You can’t back out of it and decide to come back to it the next day. Could you imagine you’re making out with someone and you stop in the middle and say “Let’s save the rest of this for later.” You can’t do that! You either have it all at once or you miss out on the rest.

Also, leftovers are guaranteed to be significantly worse than they were the night before. On the way home, it’s going to get sloshed around in the takeaway container and all of the separate parts are going to get mixed together. Then it sits in your fridge for days and absorbs all of the other flavors from its surroundings; half a jar of grape jelly, a pack of hamburger buns, and a box of batteries. Odds are you’re going to microwave it for lunch and that is going to ruin it even more. Every part of the meal needs to be reheated in a different way and none of those ways are in the microwave. So what you’re left with is some parts being too hot, some too cold, and all of them still frozen in the middle. 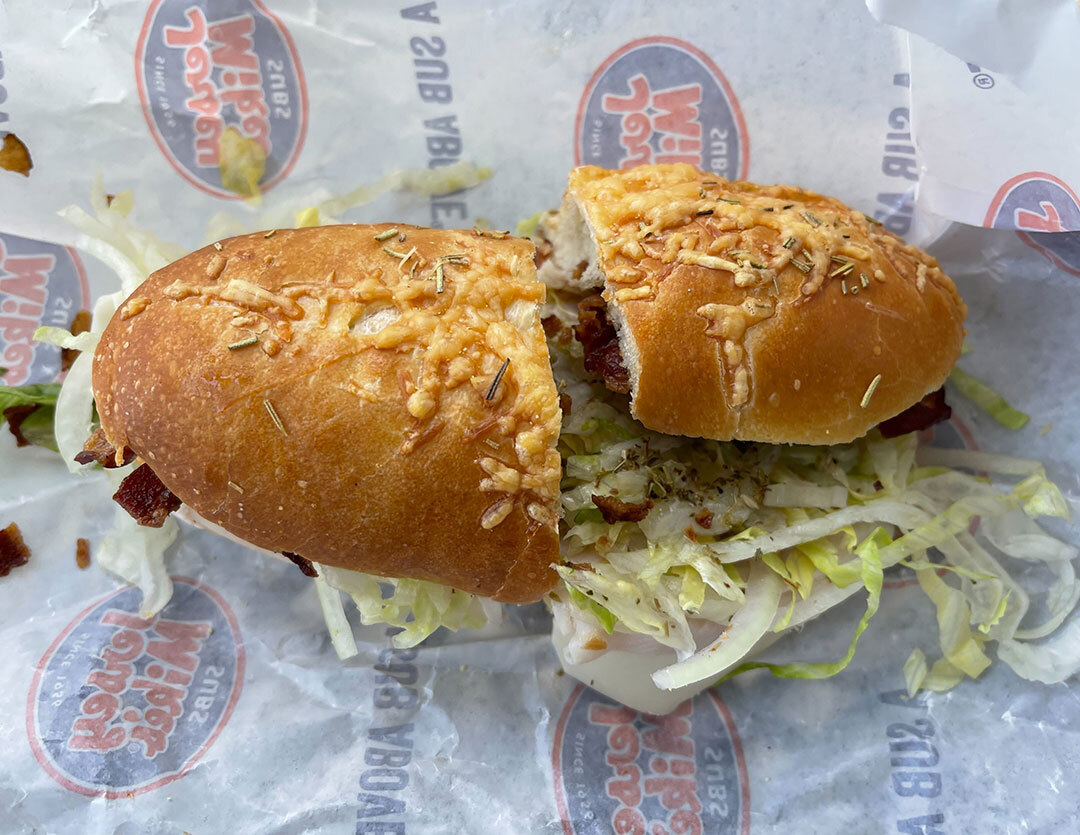 Jersey Mikes is an East Coast institution. But Thomas is a pure-blooded West Coaster. So it is not right for somebody who talks about WKND as much as Thomas to be able to deface this beloved east coast staple with his terrible order. It pains me to see Thomas pretending to be a connoisseur just by purchasing his sub “Mike’s Way.” Thomas sent me these photos so proud of his lunch and it gave off the same vibes as when a Karen says “gracias” to the waiter at a Mexican restaurant.

He ordered the rosemary parmesan bread which is short, stout, and sprinkled with cheese. It has a few sprigs of rosemary that are probably better at getting caught in your teeth than they are at providing any real flavor. Speaking of flavor, this sandwich is going to need it! He ordered the turkey and provolone just to pass on the tomatoes and add a few meager strips of bacon. The bacon looks like it was cooked at the beginning of the shift and has been sitting in a little metal tub congealing in its own fat for hours. I think that Thomas’ aversion to tomatoes is a sad state of affairs for the modern world. Tomatoes are one of the least offensive vegetables and yet Thomas probably thinks they’re too slimy for him. You wouldn’t want that to clash with the crunch of the lettuce. This is the equivalent of a three-year-old asking mommy to cut the crust off their PB&J. Tommy is twice my age and still acts like he needs his chicken nuggets cut up in dinosaur shapes.

If any of our LA readers sees someone pull up to Poods Park on the Jersey Mike’s longboard or massaging their sore legs from too many slappies with the Jersey Mike’s massage gun, say what’s up to Thomas for me. 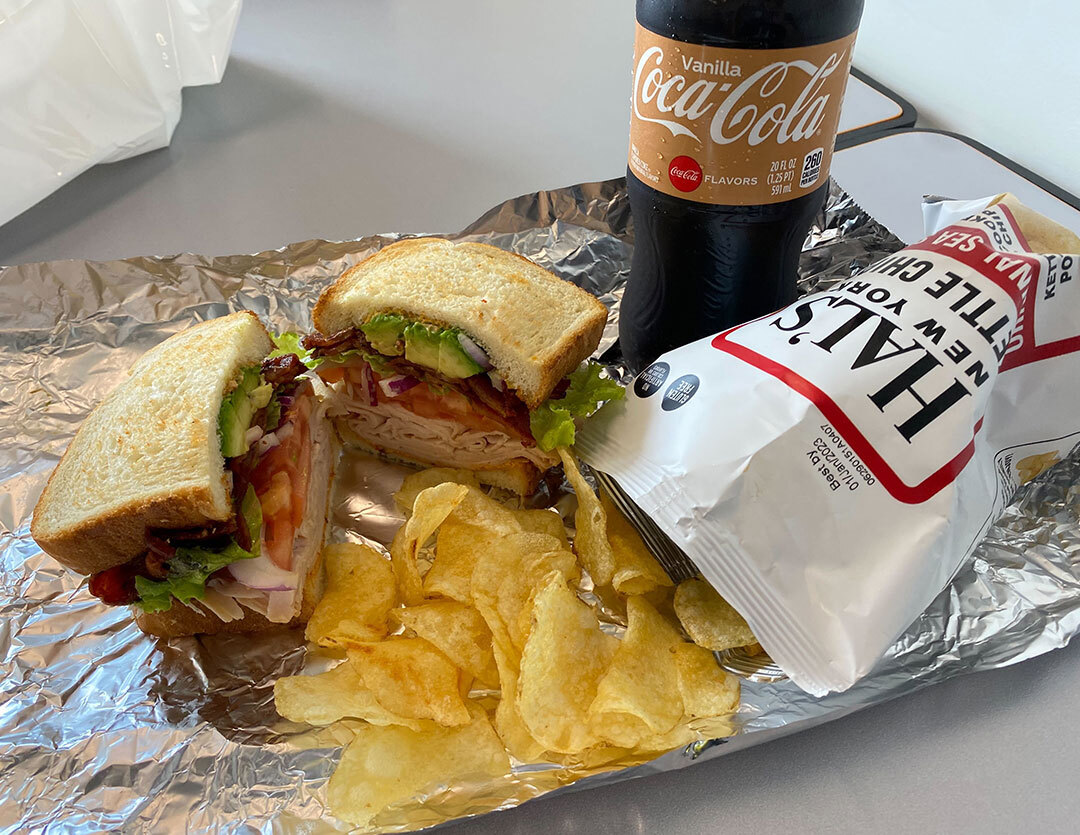 This is our new intern, Wilson, AKA my replacement, and his lunch is a classic American lunch; chicken club (lightly toasted), potato chips, and a vanilla Coke. Everything is accounted for, he’s got a main course, a snack, and a drink. I am almost disappointed by how well put together this meal is. Wilson is still a college student so shouldn’t he be eating a pack of Twizzlers and a bag of Takis for lunch?

The sandwich actually looks really nice with some fresh avocado slices, juicy tomatoes, and a nice layer of chicken. The bread also has a really light toast which looks like it adds some nice texture and structural integrity to the sandwich. When I first started at Jenkem, I would buy a hashbrown, egg, and cheese on a roll from the deli and then eat it with one hand while I steered my bike to the office. I was much less put together than Wilson is.

The keen eye will also notice that Wilson got his meal with a bag, a subtle flex in today’s economy. The deli by the office charges ten cents for their bags, so I usually pass. This often leads to problems, like earlier this week when I fell ollieing up the curb on my way back to the office. I ended up throwing my lunch (a single pack of Reese’s Peanut Butter Cups) across the curb. Thankfully, the minimalism of my lunch made it easy to pick back up. But, nonetheless, Wilson displayed great foresight with his small splurge. 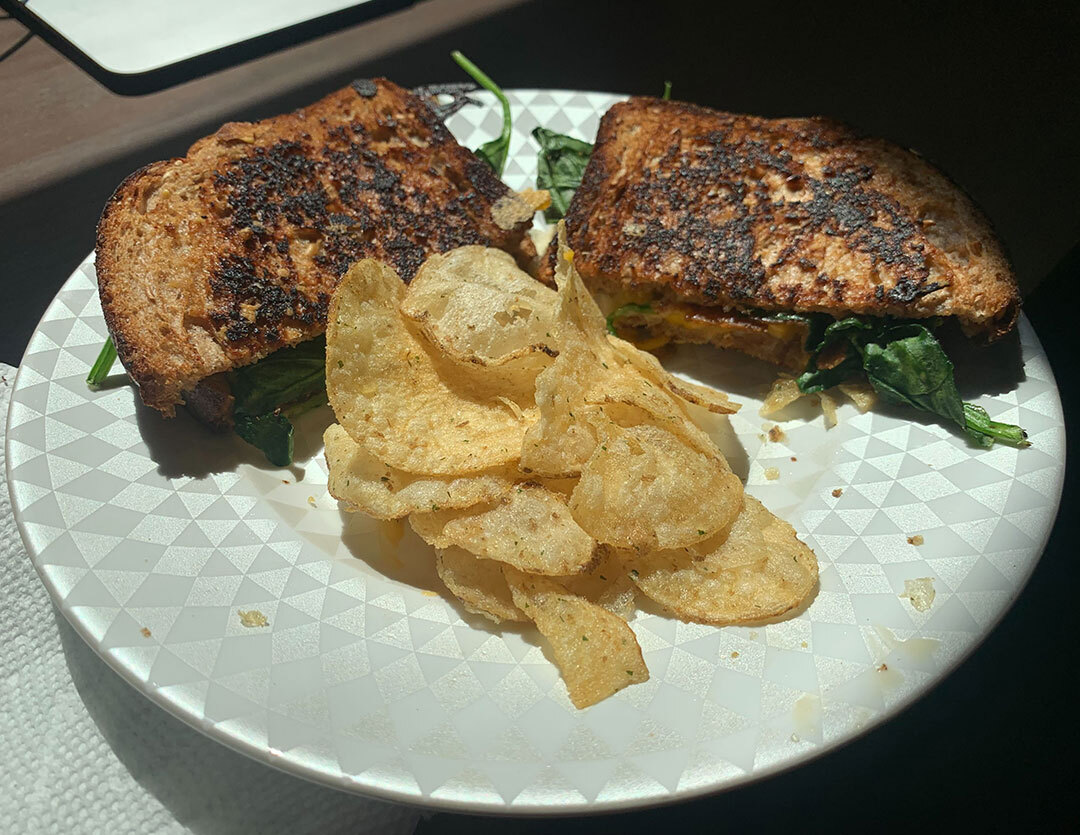 On the surface, Larry looks like he might have the best lunch here. It’s the only meal that is home cooked, albeit a bit burnt. But it is still a good-looking grilled cheese with spinach and veggie bacon. It’s definitely something that you would imagine a socialist vegetarian from Bushwick would eat.

But this lunch does one thing that I don’t like. Everyone else let their ugly hang out and showed me a real representation of their daily lunch. But, Larry didn’t want to play by the rules. I have never seen him eat anything other than ramen noodle bowls but all of a sudden, on the one day I ask him for a picture of his food, he’s eating a quality meal? Yeah, right!

He even went as far as to leave subtle hints to try and kiss up to me. For example, what chips is he eating? Dill pickle potato chips! Is it because I love Jason Dill? Is it because I’m Jewish? Well, the joke is on him because I hate potato chips. They are unnecessarily crispy, like a piece of brittle plastic, and hella oily. Look at the shine on those chips! That grease is going to be showing up all over your laptop for the rest of the day.

Also, look at the background of the photo. Would it kill him to turn on a light? The plate is also covered in mysterious crumbs and sludge, even though he tried to plate it all pretty. A swing and a miss. Frankly, I think Larry’s lunch shows someone who is falling apart at the seams, more so than any of the other lunches we have on display. 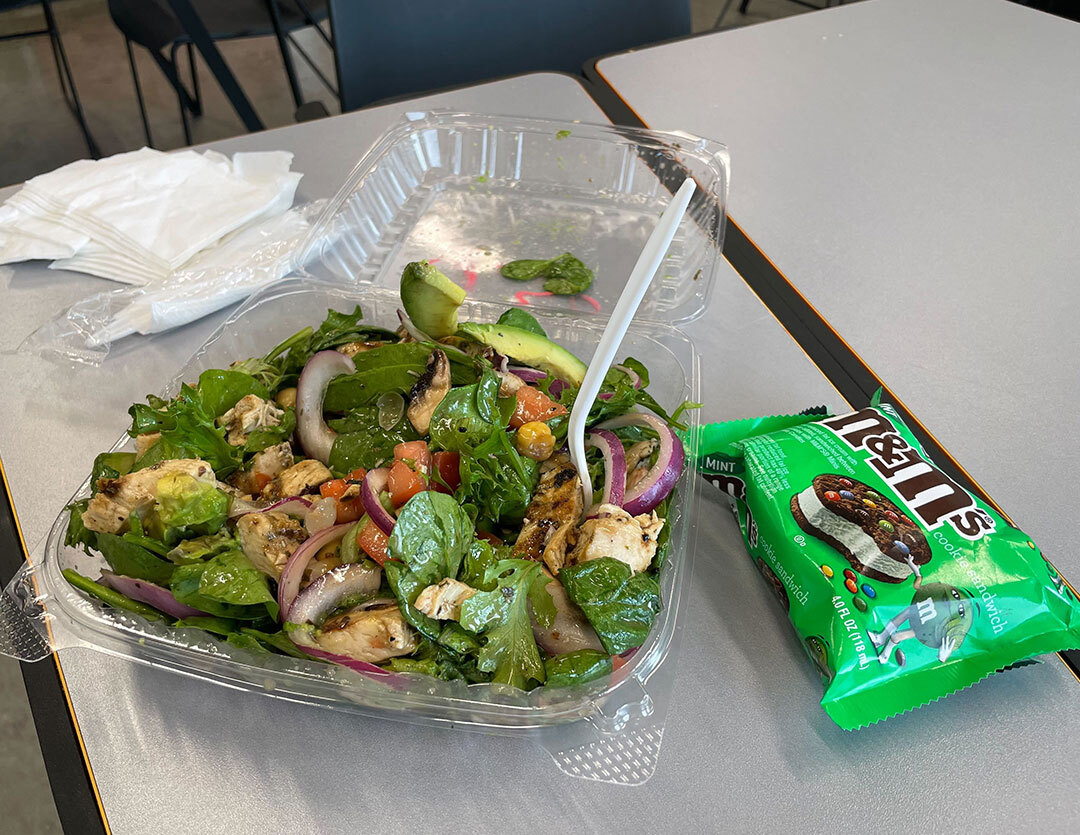 Ian is the head honcho around here. He’s also the closest to middle age, so it’s important that he keeps it healthy because we wouldn’t want to lose him. They can’t all live like Fred Gall.

He started out on the right foot; a salad with spinach, chicken, avocado, and chickpeas. Sadly, he got balsamic vinaigrette, which is definitely the worst dressing option. But other than that, this is a really good-looking salad that I would be down to have for lunch.

Ian, being old and wise, knows that everything is best done in moderation. So, you don’t want to be too healthy. You should even out the health benefits of a salad with some dessert. Ian saw me eating a Mint M&M Ice Cream Sandwich for breakfast and he probably got jealous, so he bought one with his lunch. He also does something very weird which is called self-control. At first, he only ate half of the sandwich and put the rest in the freezer so he could finish it off an hour later. At that rate, you might as well just buy two.

A note on the delivery; Ian sent me out to pick up his lunch, which I am not complaining about because when I get his lunch he pays for mine (so I splurge). However, when I left the office it was a sunny 92 degrees. But by the time I got out of the deli, 15 minutes later, it was raining in buckets. I ran as fast as I could back to the office and came back drenched. I had to change my shirt because I was so wet. So here I am writing this wearing an eyesore of a tie-dye T-shirt that we had lying around the office. 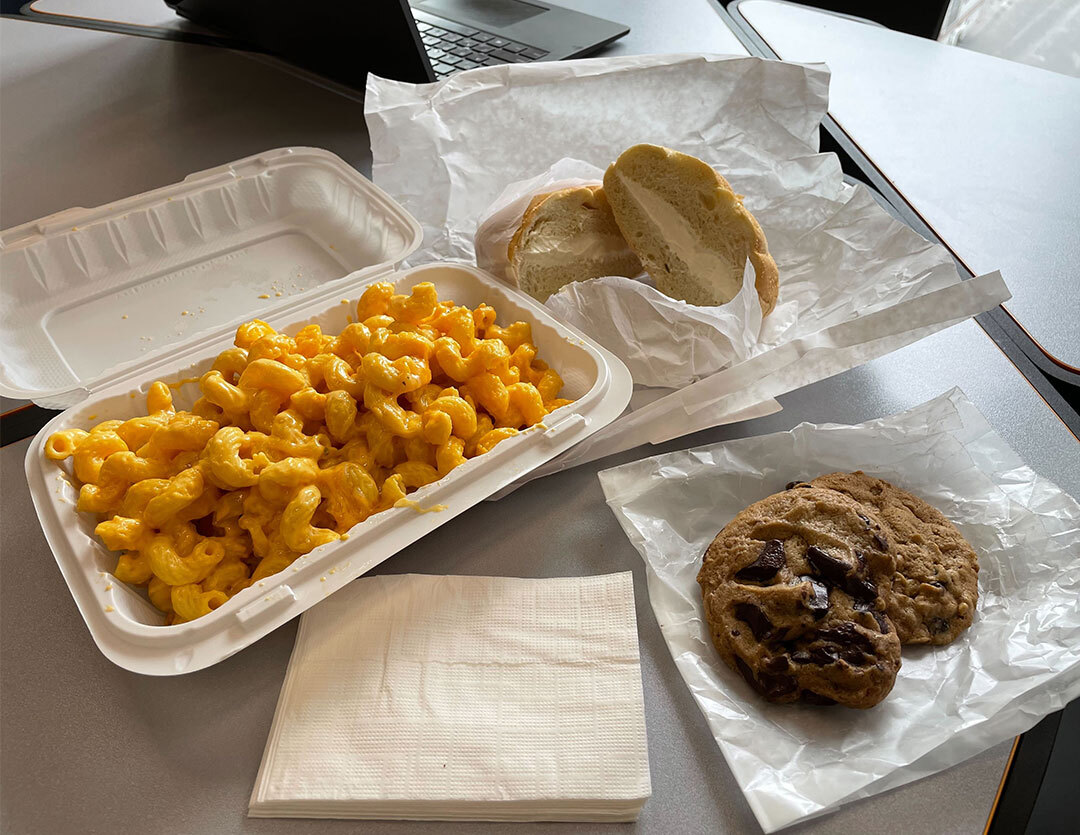 Looking back on it, this is a pretty repulsive lunch. It’s all carbs and dairy, although when I describe it that way it actually sounds incredibly delicious. I thoroughly enjoyed it in the moment and that is one of the great blessings of youth. I was able to consume these thousands of calories without any regrets or second thoughts. I got home that night and was still able to go for a run without feeling like I had a tray of mac sitting in my stomach and my Big Boys didn’t fit like skinny jeans.

Truthfully, I wasn’t expecting such a large serving of Mac n Cheese but I didn’t complain either (something I usually do). I didn’t think that pasta alone was a satisfactory meal so I got the cream cheese roll as well. I would have gone for a regular sandwich but I figured that I already had a lot of food with the mac, so I just wanted something a little more to hold me over.

Every time that I look back at this picture I realize that I really messed up on this one. I blew my opportunity here. I got cocky and dropped the ball. I want to make excuses and I want to place blame but I can’t do that. I need to take this L like a man. I ordered a bad lunch, it happens. Sometimes my palate is flawed. Yes, I enjoyed my lunch and, yes, that is wrong. I’m sorry.