WE CURATED A JENKY ART SHOW IN BERLIN 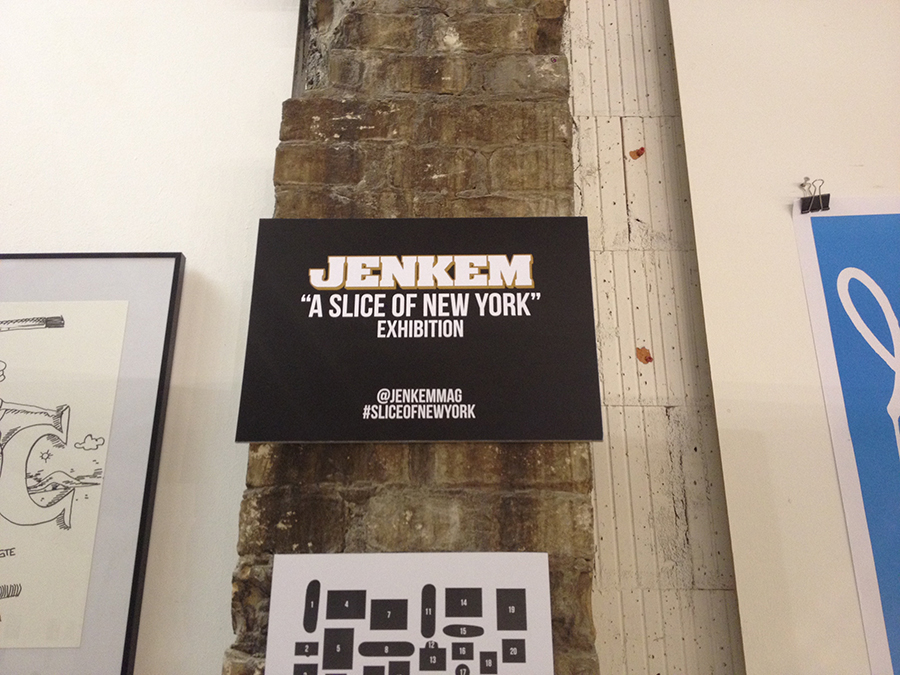 Growing up, I never really “got” art. I still don’t. My tastes are very elementary, if something looks cool, I like it. But once you get to a piece where you’re supposed to swirl your drink, stare for 5 minutes, and make some profound statement, that’s when you’ve lost me. I think it’s kind of like understanding and discussing wine – people just love to act like snobs. So when Bright Tradeshow (Europe’s biggest skate / action sports / streetwear tradeshow) approached us several months ago to curate a Jenkem NYC exhibition, I was a bit nervous, but knew we had to take the opportunity.

Thankfully, Bright offered to fly out two people and Josh Stewart, the Static & Theories of Atlantis mastermind was down to get involved and come along for the ride. We gathered up items, trinkets, illustrations, and photography from different brands across NY that we thought represented our scene well, and the show came to life as, “A Slice Of New York.”

Below are some shots from the exhibition which hung across two giant walls at the show in Berlin for 3 days. The final show included original art by Mark Gonzales, Curtis Kulig, and Lauren Kolesinskas (one of the Jenkem illustrators); photography from Pep Kim; 16MM film shot by Josh Stewart; original artwork from Kevin Tierney, Billy Rohan, Jahmal Williams, and Dylan Goldberger; unique items from Theories of Atlantis, Static, Hopps, Quartersnacks, 5Boro, NYSkateboarding, Labor, Bronze, 43 Magazine, Traffic, SHUT, and Zoo York; and a whole bunch of other NYC trinkets.

As our first official foray into the artworld™ I think we held our own and we definitely enjoyed the experience. I’m already thinking about ways we can make the next show better, and who knows, maybe we’ll continue with it and end up in your city. 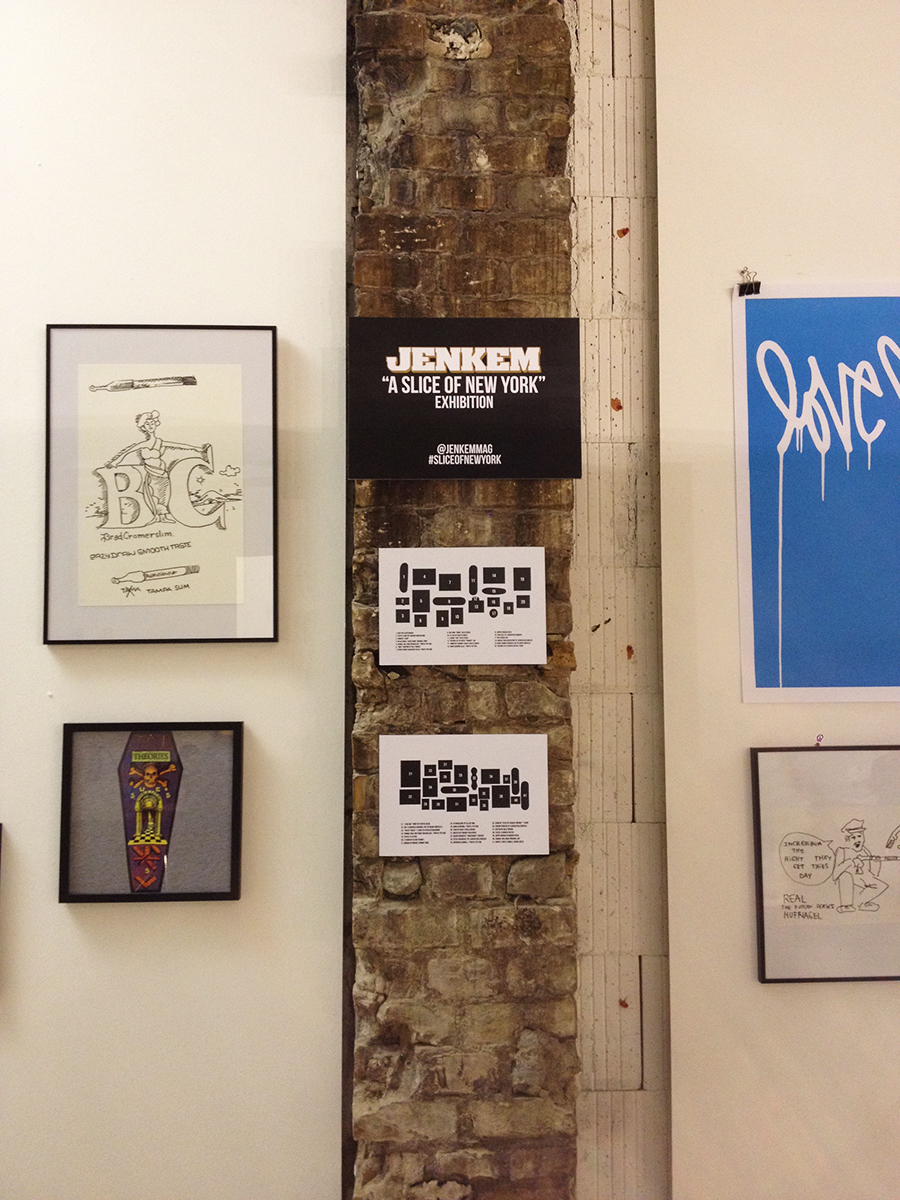 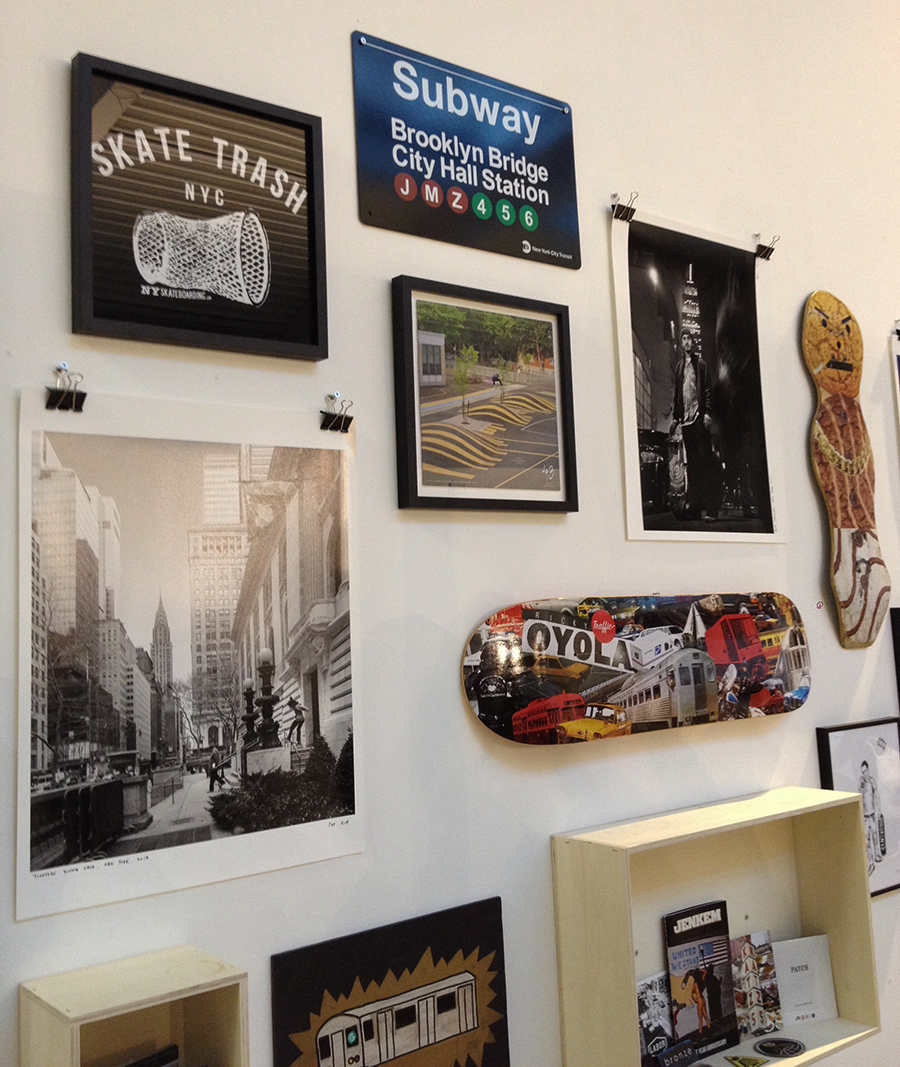 Aside from bringing in artwork and photography from NYC artists and brands, we thought we’d highlight some NYC trinkets, like this subway sign, to sprinkle in the exhibition to give it some more city flavor. 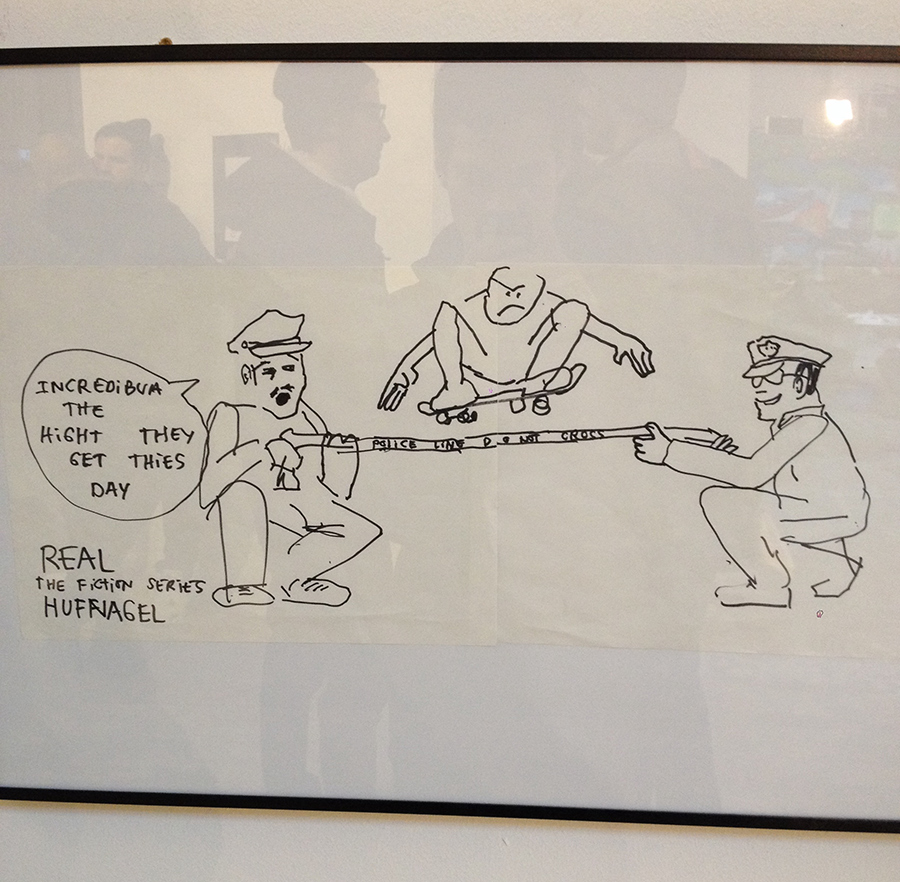 Here’s a close up of an original Gonz illustration, originally drawn as a Real deck graphic for Keith Hufnagel. Between his cute lovable characters and ridiculous phonetic spelling of everything, you just want to hug this one. 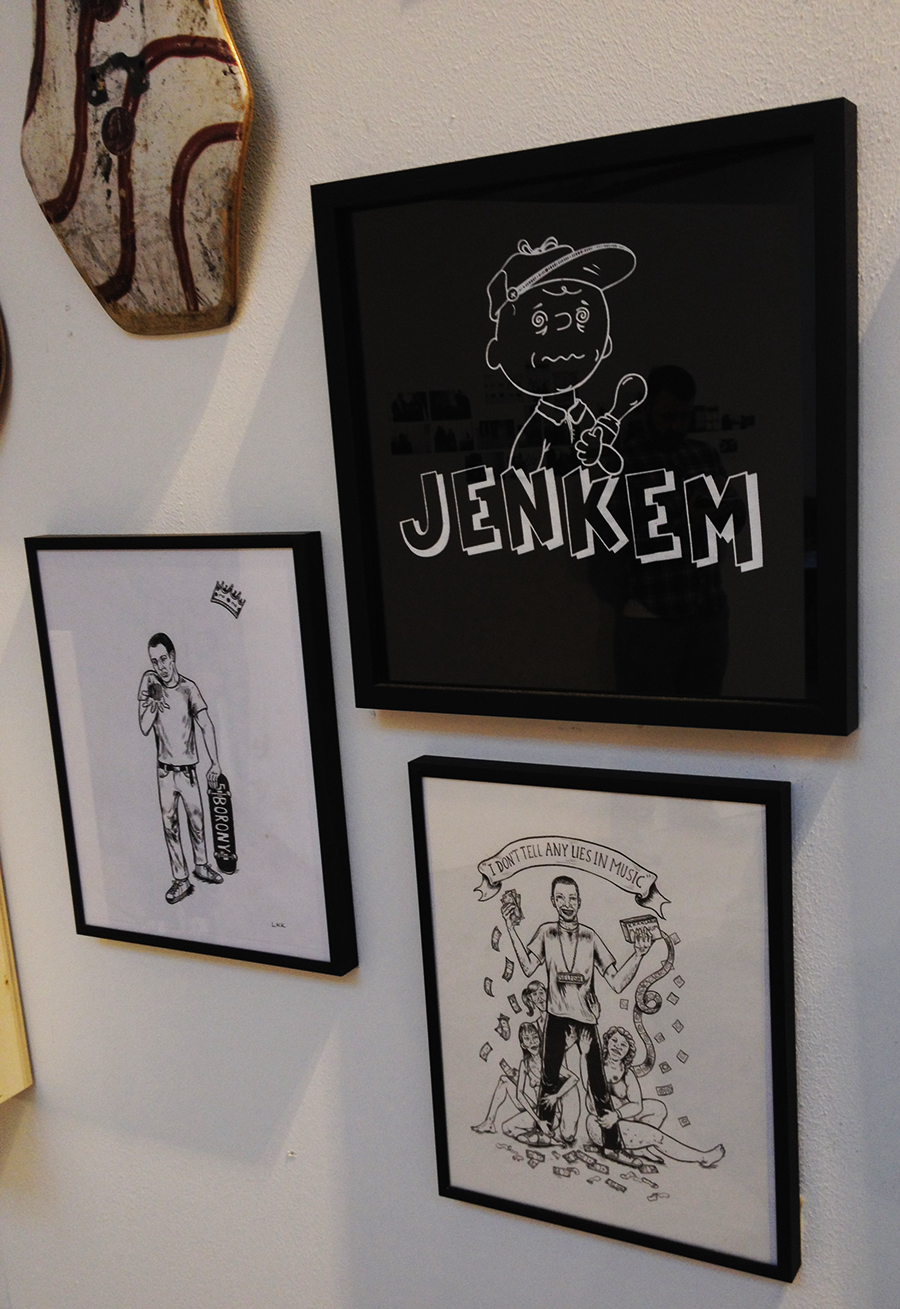 Two OG illustrations from our artist Lauren Kolesinskas, one from our 2011 interview with Jereme Rogers, and the other from an early interview we did with the mayor of NYC, Steve Rodriguez. Above it is a framed early Jenkem shirt from 2012, illustration by Dyemond Daniel. When Jereme Rogers originally saw this illustration in 2011, after we did the interview, he wasn’t happy with it – he actually threatened to pursue legal action if he wasn’t happy with the final article, but then we talked it out and ran it with the interview, unchanged. Big ups to Jereme for being cool about it and not trying to sue me. 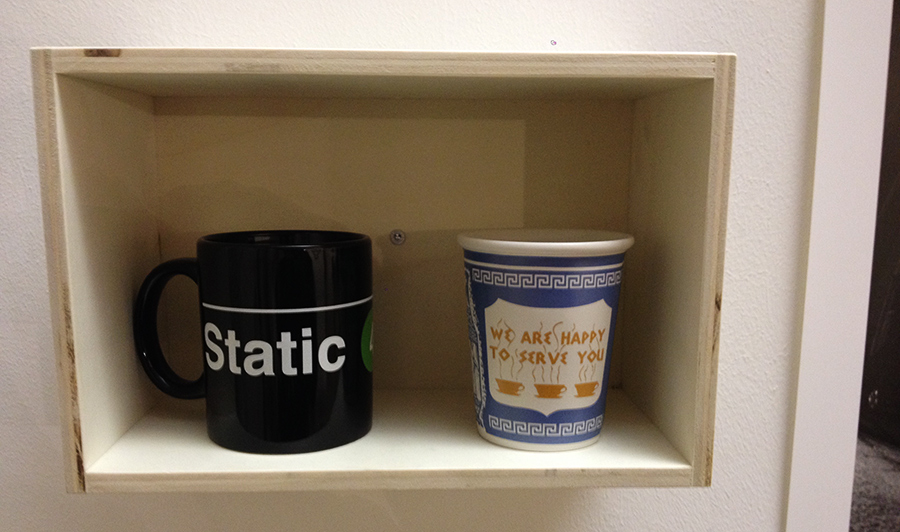 Some fun ones on display right here. To the left, we have a Static 4 mug, produced by Theories of Atlantis, and to the right, an old NYC coffee mug replica to keep it company. 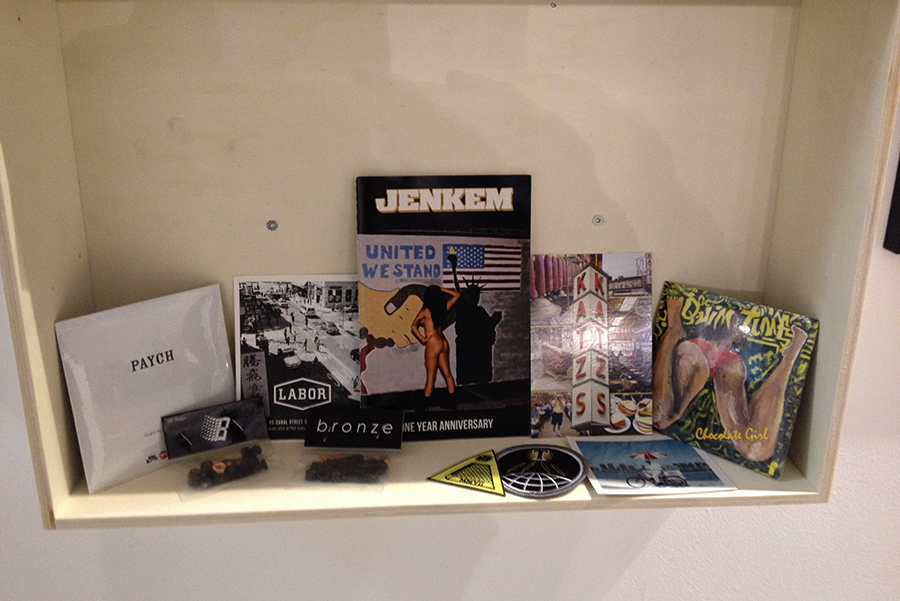 Everything you see here was stolen after the first day. I guess it was a pretty dumb idea. We had a bunch of items we wanted to include in the exhibition, but they didn’t necessarily “fit” anywhere, so we displayed them together on a central panel. A couple of hours after the show started, we realized we got completely cleaned out. What a dick! 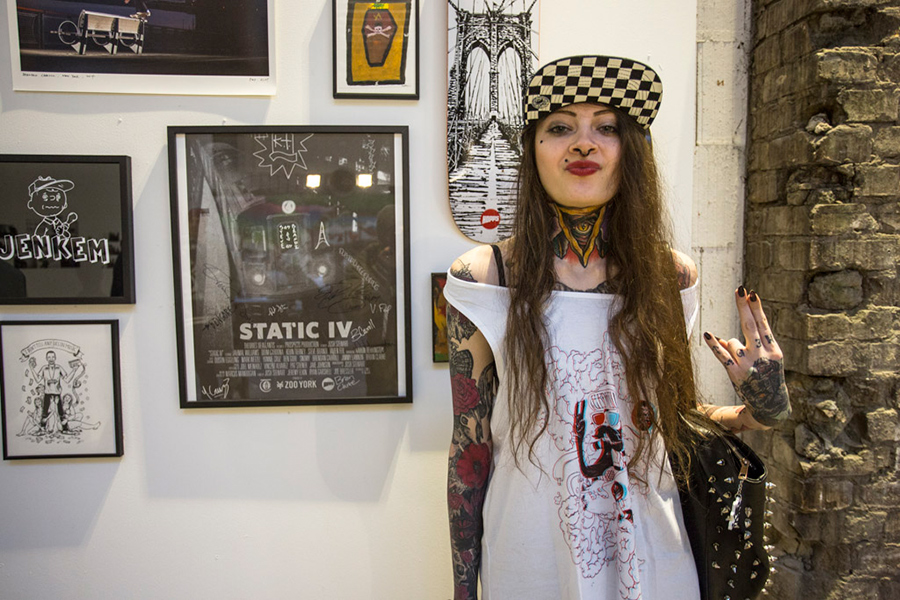 Not gonna lie, that neck tattoo is just awkward and scary. 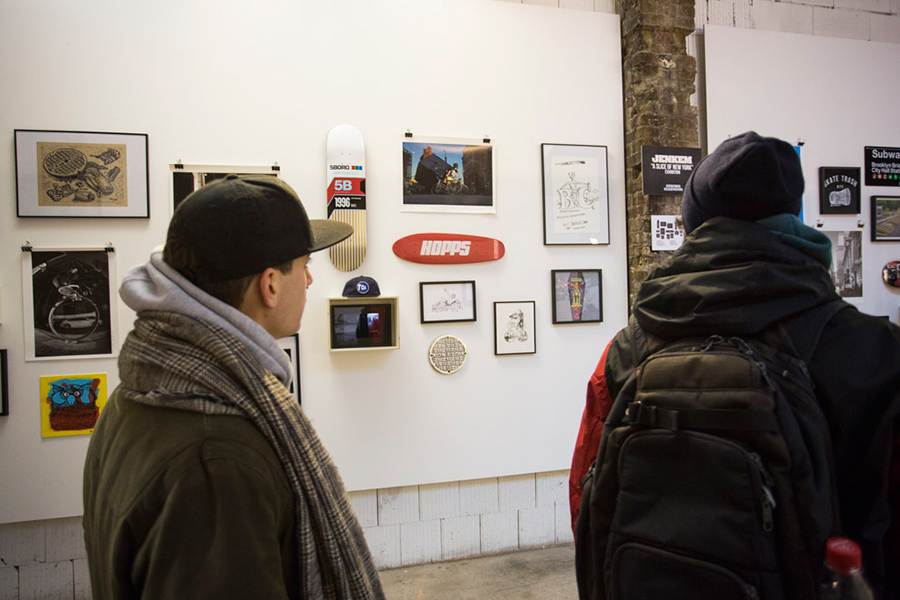 Overview of one of the walls right when you walk in. Other shows in our area was the Chocolate 20 Years exhibition and some shoe exhibition. 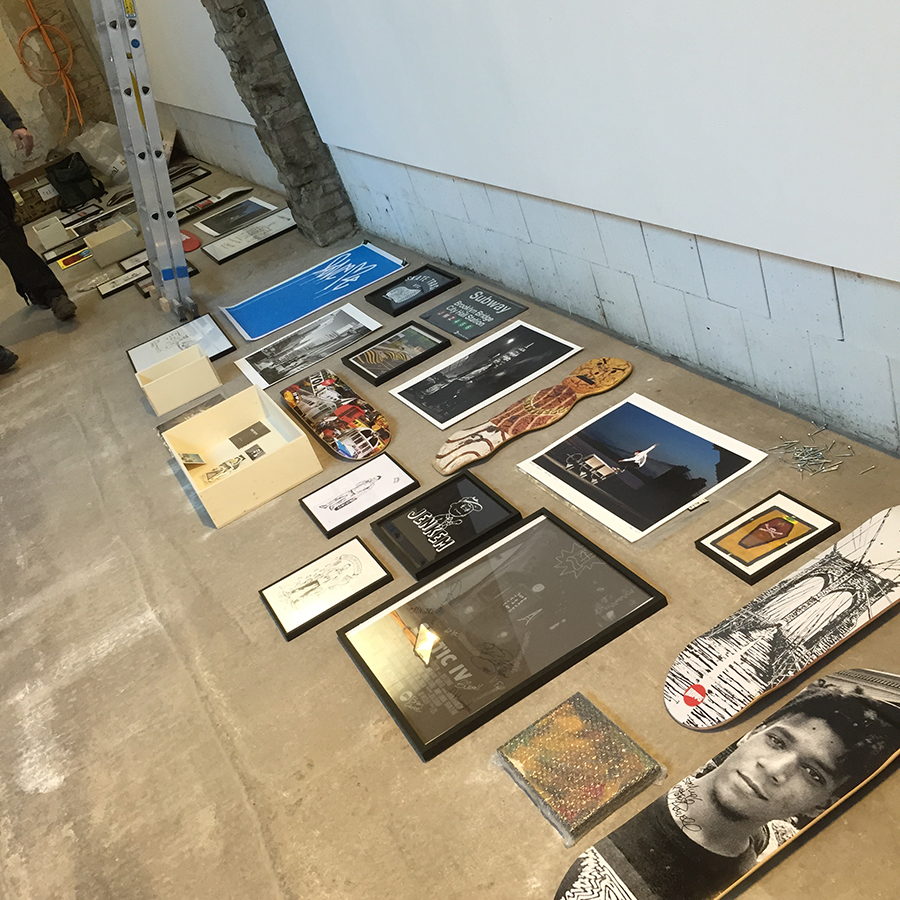 Layout of wall #2 in the planning stages. 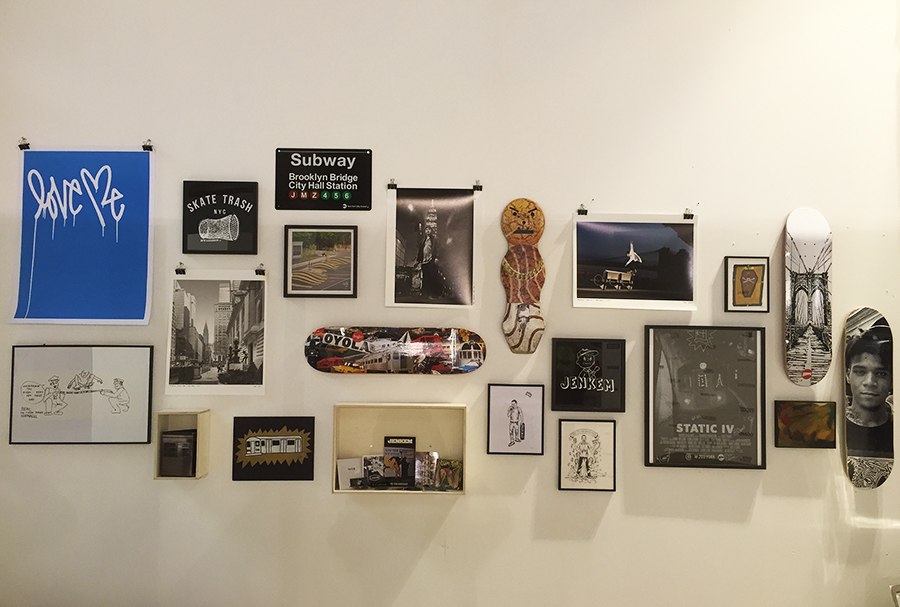 Layout of wall #2 after the planning stages. 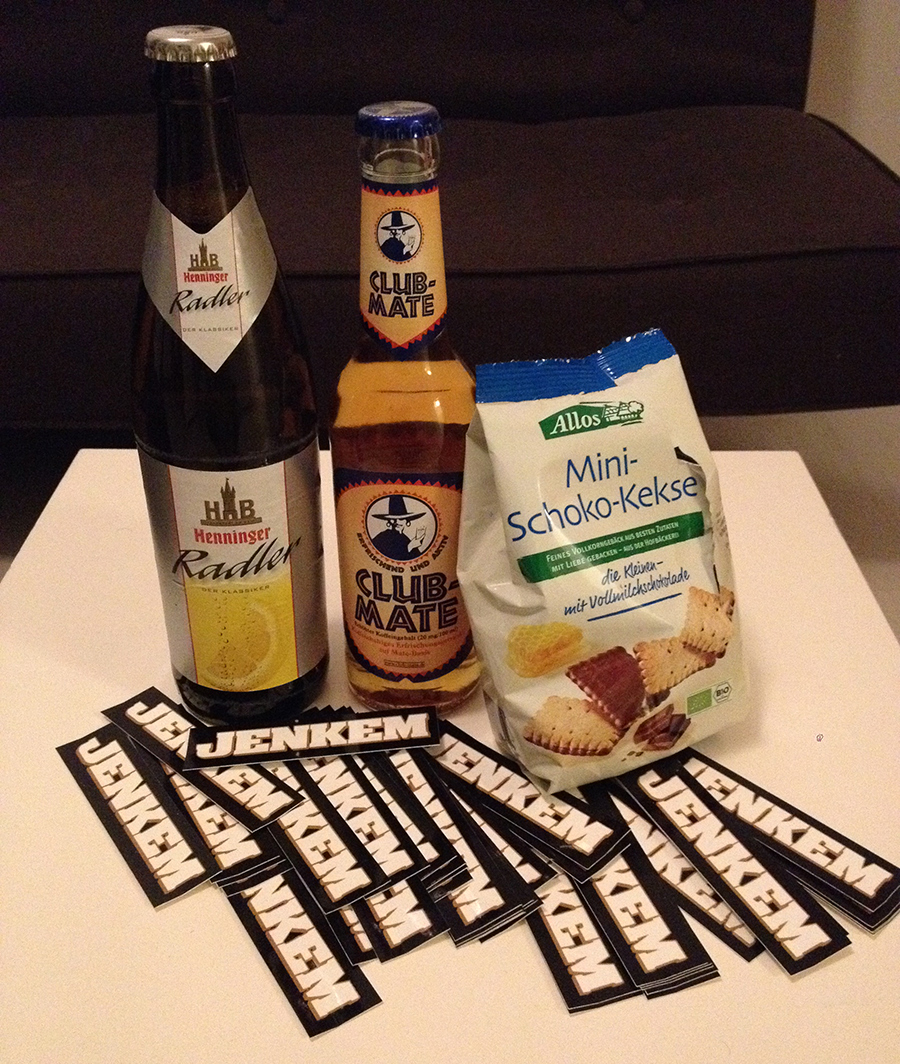 Some recommended Euro treats if you are ever around here. To the left is a Radler beer, which is pretty refreshing. It’s a mix of beer and lemonade. I guess if you drank something like this in America everyone would call you a pussy, but the drink is pretty good and a nice warm up for a night of drinking. In the middle is a popular drink, Club Mate, which is like a natural carbonated mate tea, pretty high in caffeine and other stimulants. Josh Stewart had one at 10PM and couldn’t get to sleep until 6AM – so it definitely does the trick. 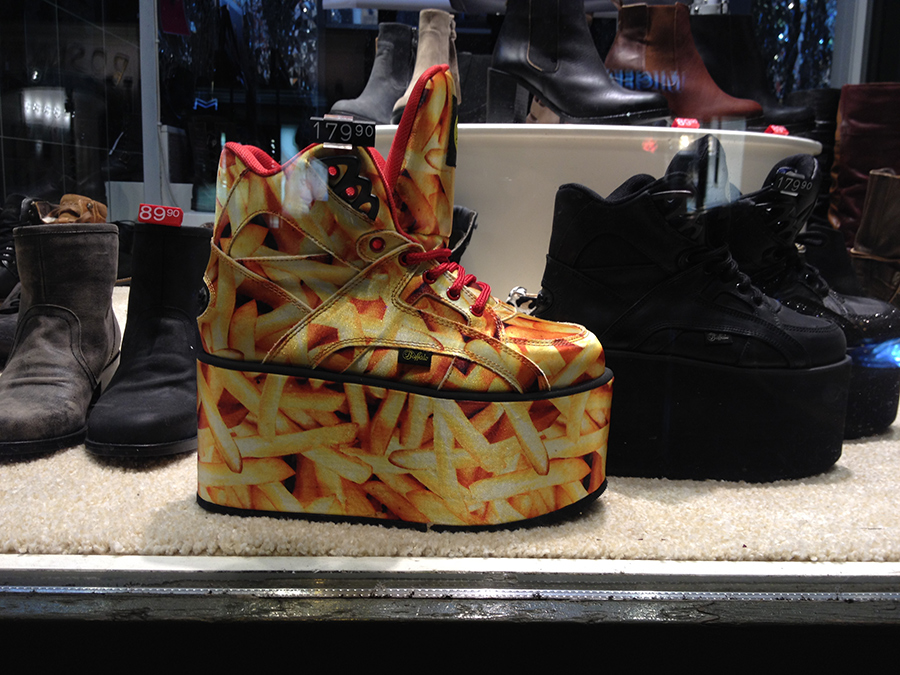 Not everything is amazing in Germany, as demonstrated by these brutal french fry shoes at a low 180 euros. 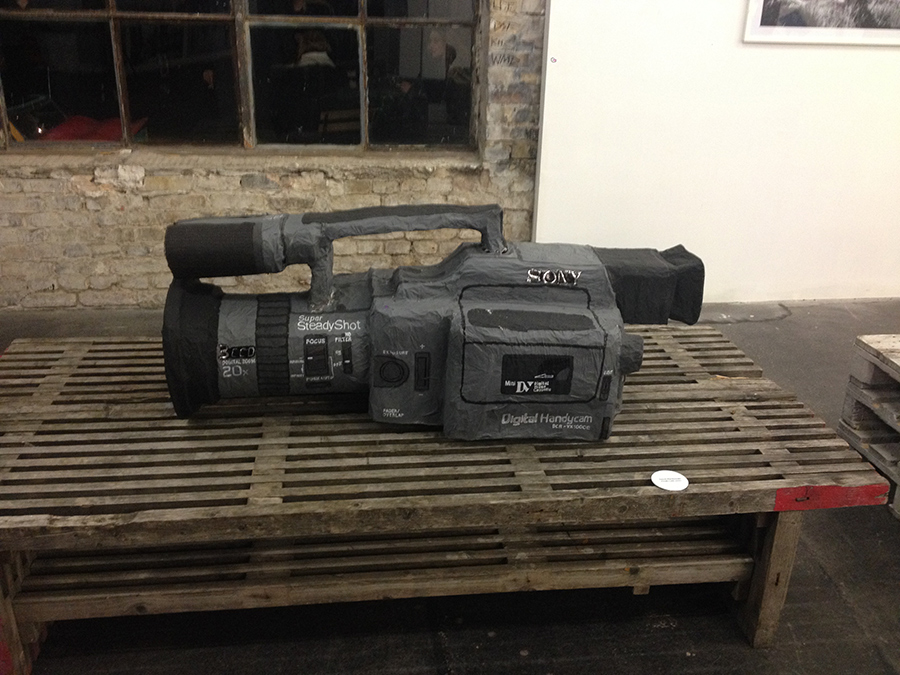 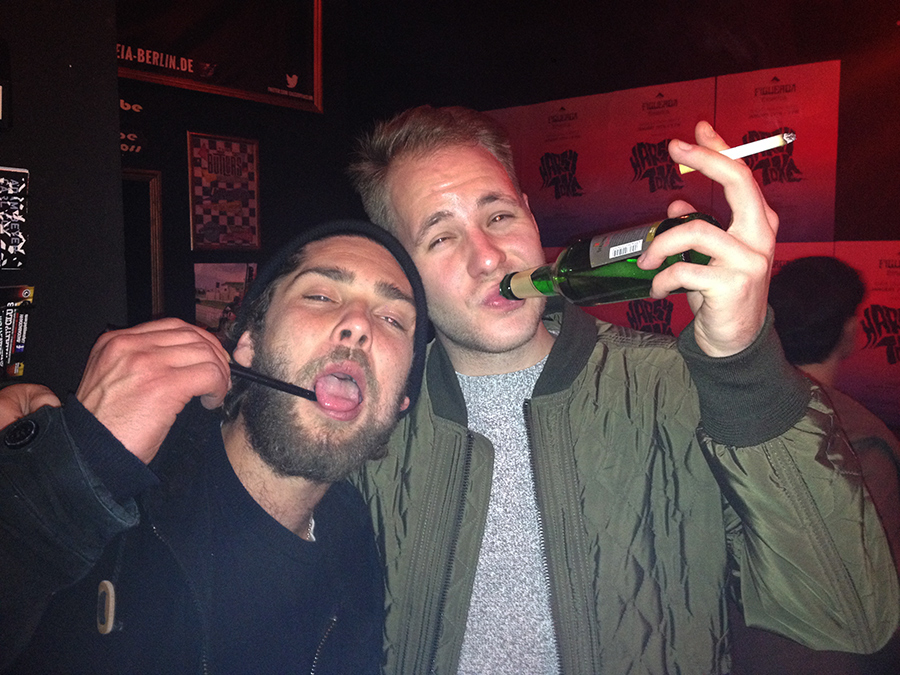 I met these two guys one of the first nights going out in Berlin. Both were hilarious and kind of took me under their wing and played tour guide for the next 3 days. Patrick Rogalski to the left is a local hero, and to the right is Phil, who is “retired” from skating but loves to talk trash and always makes it an interesting night. Good dudes! 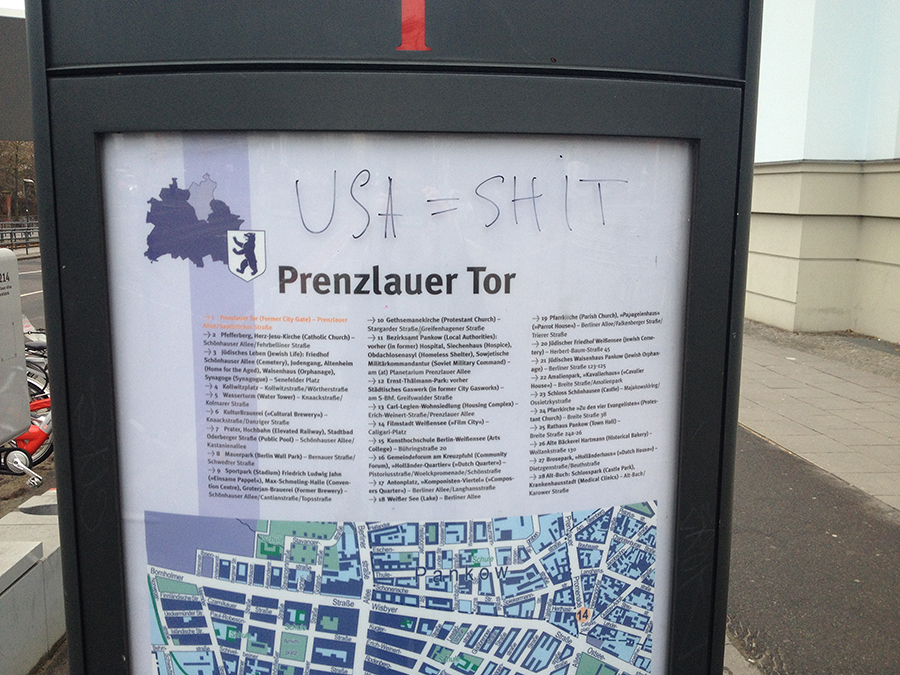 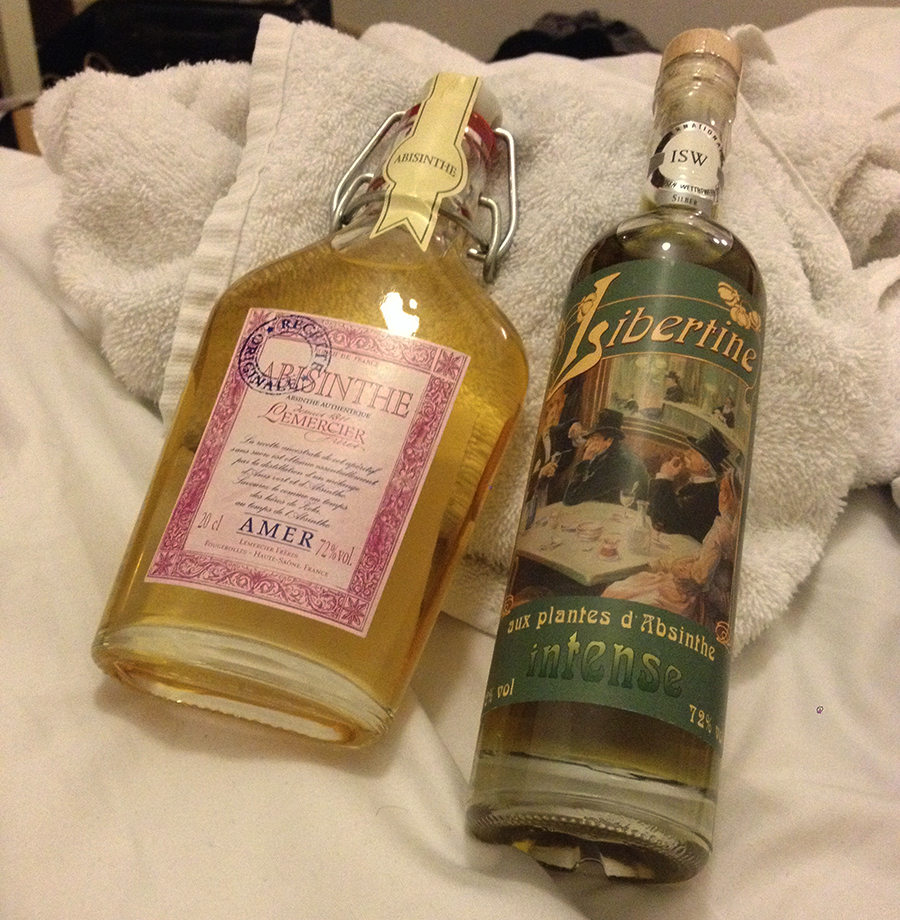 If you are in Berlin and a fan of Absinthe, definitely stop by the Absinthe Depot which is right in the middle of Berlin. Their selection is insane, it’s almost like an Absinthe Museum. I said I was looking for two beginner and traditional type absinthes (that weren’t too expensive obviously) – he recommended these two. Both 72% alcohol (you dilute them with water). Of course, I was an idiot and put them in my carry on luggage, so both of these got confiscated immediately as I entered airport security. Dumb ass me. 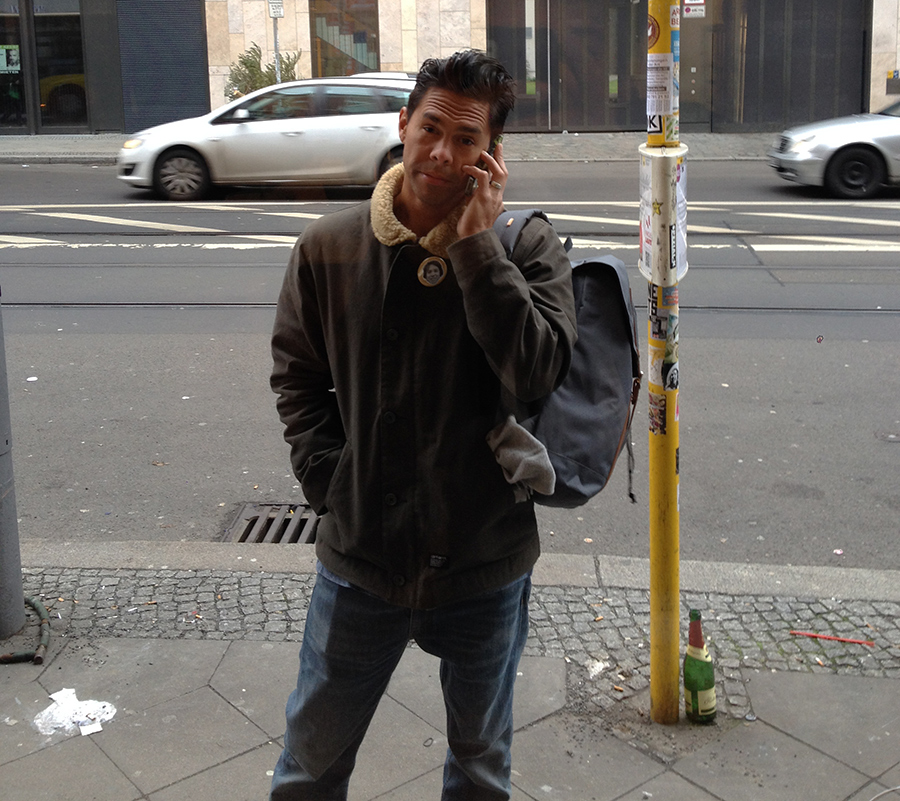 Bumped into the former pro skateboarder Dan Rogers out there too. He doesn’t drink alcohol or caffeine but still goes out hard and enjoys dancing and pretending to beat me up, jock style. 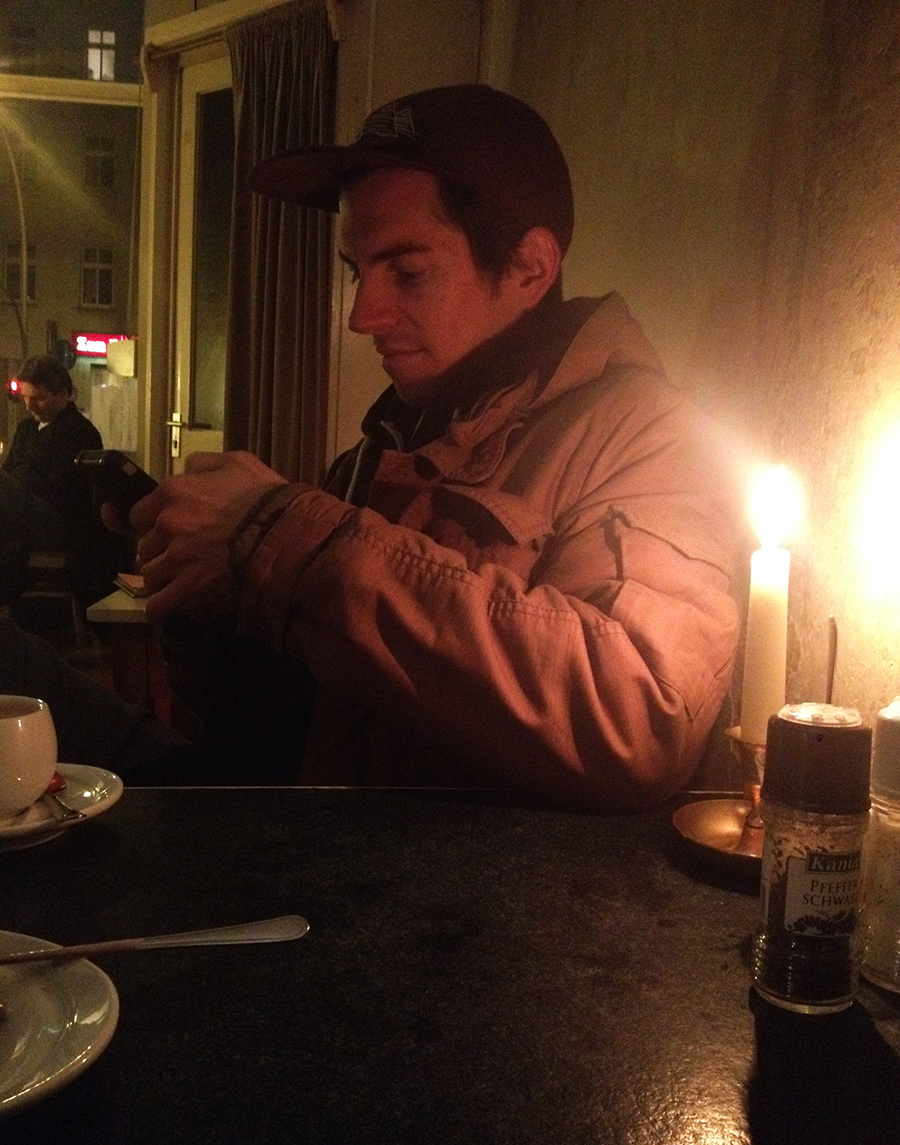 Had the pleasure of wining and dining with Josh Stewart every night and most mornings. Since we didn’t have service in Europe we only could use our phones in wifi areas, so at dinner we would catch up emails. I gotta say it was really refreshing. Going out and not having a phone was fun because you never knew where you’d end up, and you wouldn’t be waiting on people. 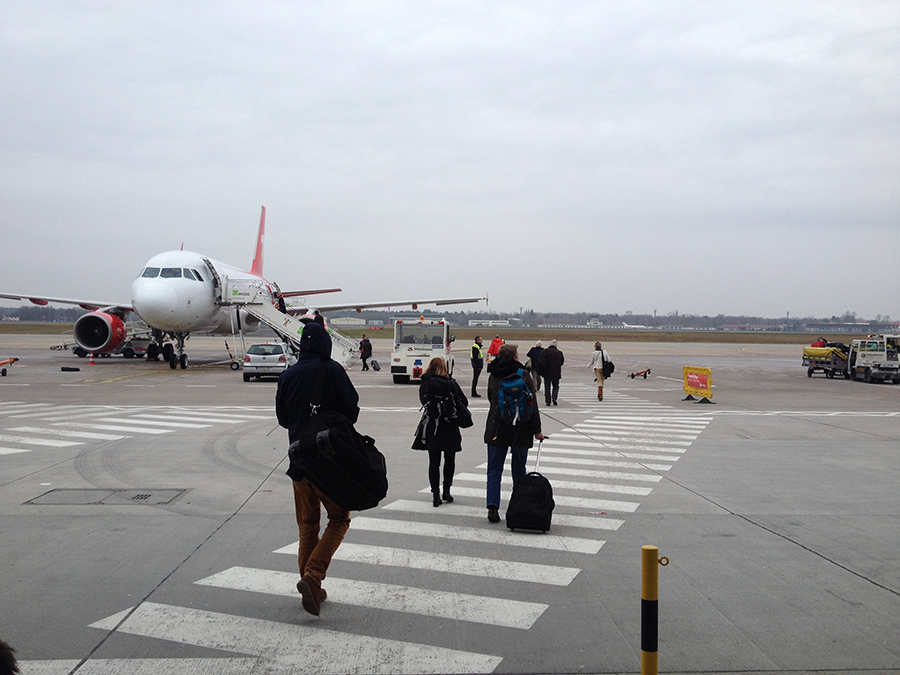 After 10 days in Berlin, an art show, some skateboarding, lots of techno, some Tinder action, and plenty of drinking, the trip was over. If you have the chance to go to Berlin, do it, and then bring me with you. Was fun as fuck. Would do again. 10/10. Recommended.

iPhone photography & words: Ian Michna
Special thanks: Josh Stewart & Damon Thorley.
Daily updates on our Facebook
Get brainwashed on our on Instagram