There’s a reason why Steve Rodriguez, a dude from New Jersey is considered the mayor of NYC skateboarding – and it’s not just because we drew this crown on his head. 3 decades of skating the city, 15+ years running 5Boro skateboards, organizing contests and saving the Brooklyn Banks is just the start. He’s one of a handful of skaters who was skating everyday throughout NYC during the 80’s and 90’s, at the height of the crack epidemic and before every street had a Starbucks and an overpriced college dorm. We caught up with him to talk NYC skate spot history and get a glimpse of its Gotham style past.

Tell us what it was like growing up & skating NYC in the 80’s
The city was super gnarly, really out of hand. I just remember 85, 84, you really could do anything. I used to come in on weekends to help out at my mom’s store on the corner of Bleeker and 6th avenue. I remember watching a group of thugs walk by the supermarket across the street that had a soda display outside. They picked up a case of soda, kept walking and then threw them at people on Bleeker street. I saw some guy, throw a can of soda at an old lady, hit her on the back and watched her hunch over in pain while the whole group was just laughing. There was just so much shit going on and I think the police were just busy or didn’t care…

Skateboarders ran the shit. When you would roll thru to a spot, people would leave immediately. Didn’t even have to say anything. The only people that didn’t leave were the homeless people. There was some sort of give and take, they understood what you were doing. But you would always get in fights with homeless people. Then the problem(for skaters) started when Giuliani got elected, he tightened the screws a bit too much. I remember at a time there were bike cops all over Manhattan, you couldn’t even go through a red light with your bike without getting a ticket. I know because I got one. 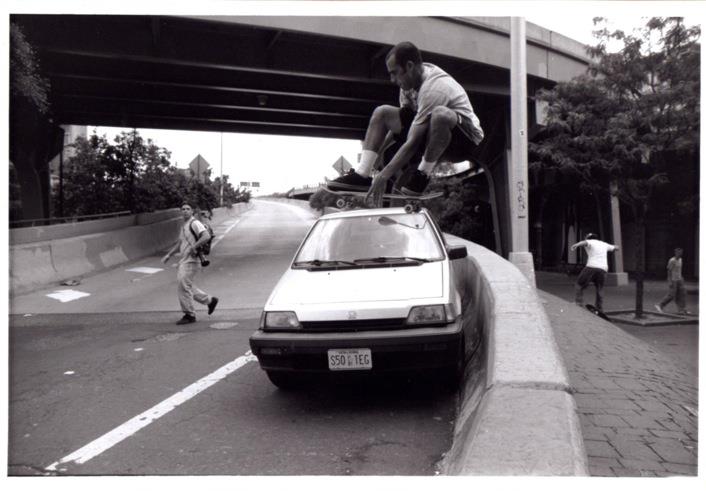 What’s a major difference between the skate scene then and now?
Today if you show up to 12th and A or any place to skate in the city, you are instantly part of the scene. Just because you are there and you have a skateboard. It’s almost to a point where a longboarder, BMXer or rollerblader has that same instant belonging. Back then it was completely different. It was so normal to meet other skaters and them to be like, “who the hell is this.” That was just part of how the scene was. You would either be accepted or you wouldn’t and someone would jack your board or vibe you away.

Back then there was a certain element of sketchiness or danger. Do we lose anything now that the city is all clean and sanitized?
Oh hell yea, it waters down the culture so much. Now spots like 12th and A (or other major spots today) are so accessible not only physically but culturally and mentally, like, “oh I’m a part of this just because I’m here.” You’re not working for it, it’s too easy. You’re not paying any dues. It used to be that you had to earn the right to be a part of something. That’s honestly how I was taught. I feel like in any great culture that’s how it is. But who am I to judge, maybe what they are experiencing, with the ease of integration, maybe that’s what is so cool about skating now. Maybe it’s been flipped.

Paying your dues, that is kind of a lost mentality.
Back then If you had respect, that’s kinda all that mattered. Now there’s none of that. All these things are dropping out of our culture and making it so normal, like basketball/football/etc. Like if someone is doing a trick, you don’t try and 1 up them or do their trick. It’s like going out with someones girl or something like that. There are certain kids that definitely get it, it’s a lot of where they come from and how and who raised them. You can tell some of them were kinda raised in a tougher situation or in a situation that taught respect. But when you see the other kids, that haven’t worked for anything in their lives to be a part of something, it’s like, god what a kook. 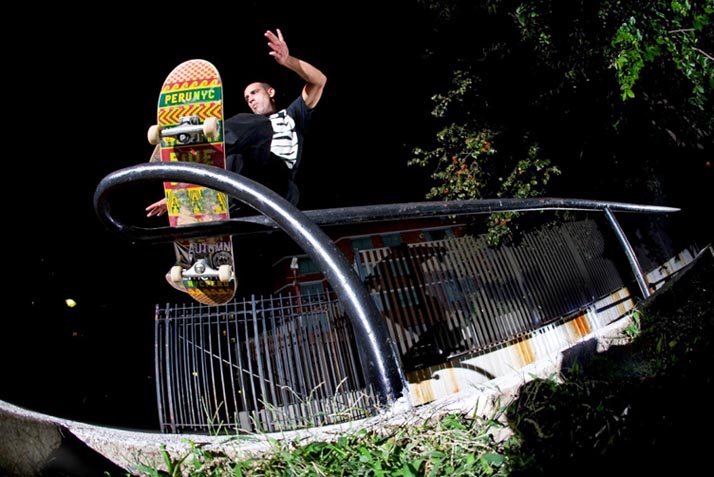 NYC Spots then and Now:

Union Square: Back in the day, it was kinda this mecca – I would skate there all the time. All those students weren’t living there yet, it wasn’t as crowded as it is now, not as nice either. People didn’t even sit inside the park and once it got dark, it got sketchy. Even on a Saturday afternoon, the shit was run by skaters, pedestrians didn’t sit on the steps like they do now (or they knew where NOT to sit). The plaza didn’t have that whole front part, where people skate now either. There were people that skated there a lot and the locals would definitely vibe you. Those rails there, if you watch Burton Smith he has an awesome part in a Zoo York video, where he’s just doing lines at Union. What stopped people from going there, is after they renovated it, more pedestrians started to go there, and then police ticketed you for skating there for a while.

Astor Place: It was a great meet up spot because regardless of where you were skating, you would go by it, and there were a lot of cheap places to eat. Saint Marks used to be totally different, people would go eat at Dojo and all those little Asian joints, and it was super affordable. Now the only people I see skating there are foreigners skating what used to be “the spot”. The spot itself is basically the same as it was, it’s just that the culture isn’t there. What made it so good, is that there’s a lane of traffic that no cars ever go on. It’s the road closest to the island, on the south side, no one ever turns left on to that lane. So you can just hangout on the street, how often do you have that at a super busy intersection?

Washington Square Park: This is where skaters used to skate at first in NYC. It was the first “spot”, then the Brooklyn Banks. They would just go back and forth between the two. Since they redid the park it’s just one level but it used to be two levels. A lower level, an upper level and in between the two were these banks that were pretty steep, along with ledges. That’s where I first met Mark Gonzalez. I was trying frontside 360 ollies as fast as I could on flat. I did one and, as I landed, I looked up and there was Mark Gonzalez, he was like, “hey you’re pretty good at those.” I honestly didn’t know what to say but, “thanks.”

LES skatepark: The skatepark used to just be basketball courts, but I don’t even think there were hoops, it was just total sketchy. Super shitty ground, the only thing you could do was ollie the stairs. I believe Pat Smith was the first to ollie the doubleset. Then they made the skatepark, and it was some prefab junk and fun for a while Then we fixed it up a little with some Tony Hawk Foundation money and now next spring it will be a brand new skatepark. It’s seen so many iterations.

Thompkins Square Park: No one really skated it until Autumn skate shop opened up on avenue A and 3rd or 4th street at its first location. They used to bring a box over to the park to skate and that’s when people started skating over there. Later there were a lot of obstacles. There were like 2 picnic tables there to ollie over, a flatbar, a launch ramp. It wasn’t like obstacles that were good, they would always break but there would always be new ones being made. I remember when they repaved it, it was super smooth. That was probably in 1994. But to me once that ground got that huge crack in it, and you had deal with the district attorneys baseball team and all that, it wasn’t worth it to me. To me it’s more about the culture then the spot. If there’s a good vibe at some shitty ass spot I’ll still probably go skate there.

Illustration: Lauren Kolesinskas
Blah blah blah with us on Facebook