NOT ANOTHER 2022 DIME GLORY CHALLENGE RECAP

It’s been three years since the last Dime event, so when they announced the return of the Glory Challenge a few months back, I knew we had to figure out a way to be there. Skateboarding had missed what many would argue is the best “contest” in the game, so it was obvious the Dime crew would come back with some new tricks up their sleeve.

One pretty big change was that it’s now a ticketed event, rather than totally free and open to the public. According to the production team, it was a decision they made after having to turn people away in previous years who traveled from across the world and were unable to get in due to capacity. Bit of a pain, but it makes sense, and that wasn’t going to stop people who really wanted to make it.

As the rest of the details rolled out, it was obvious this year was aiming to be a blowout: two block parties, two days of skating, and excited skaters and attendees flying in from all across the world. 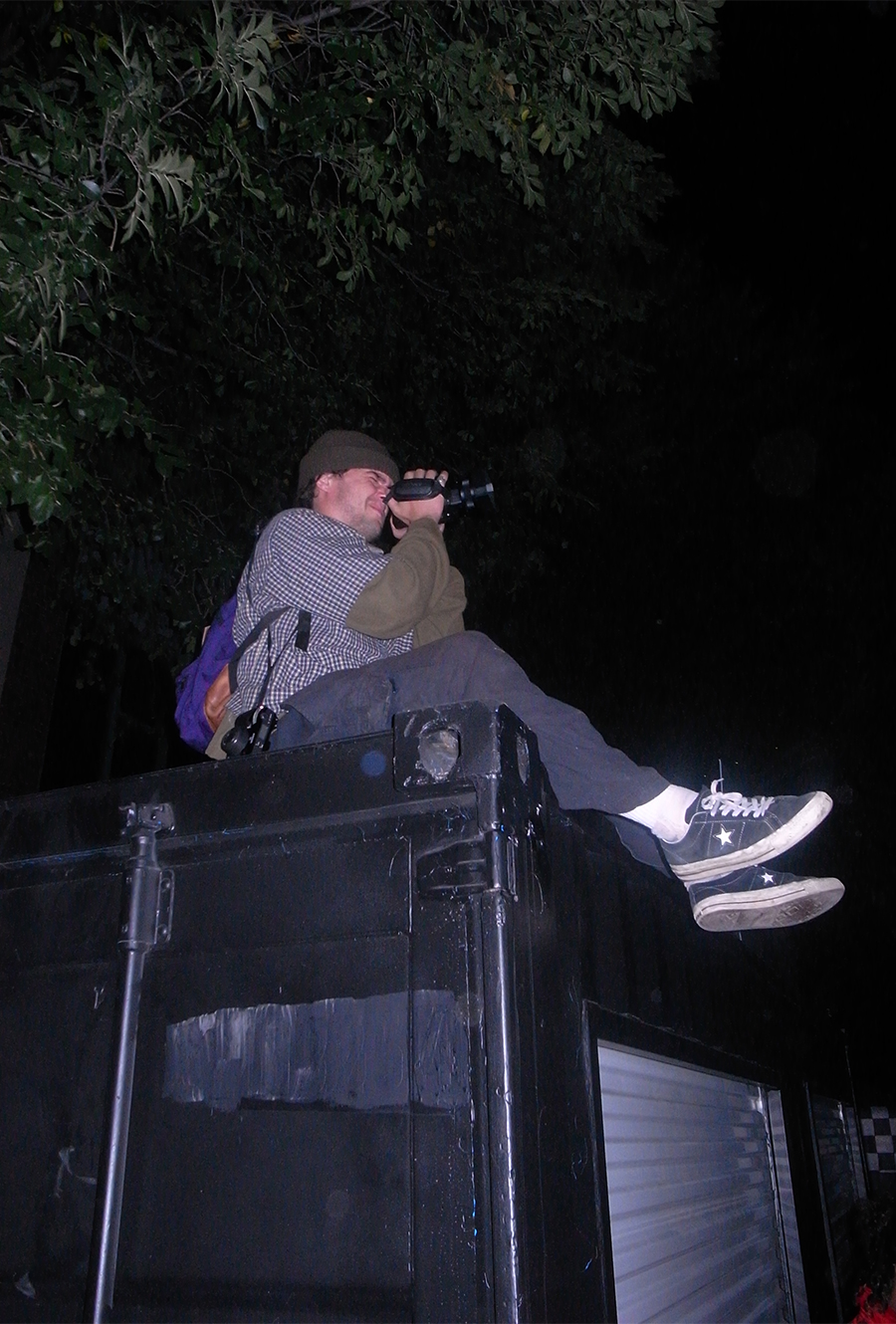 Our crew met up in Montreal traveling from all across the country, with our former intern Wilson Lucas (above) flying in from North Carolina, our sales and partnerships guy Thomas Barker from LA, and filmer Ian Ostrowski and myself driving up from New York. Our meet-up point was the block party, where Wilson got a good vantage point from the top of this shipping container. 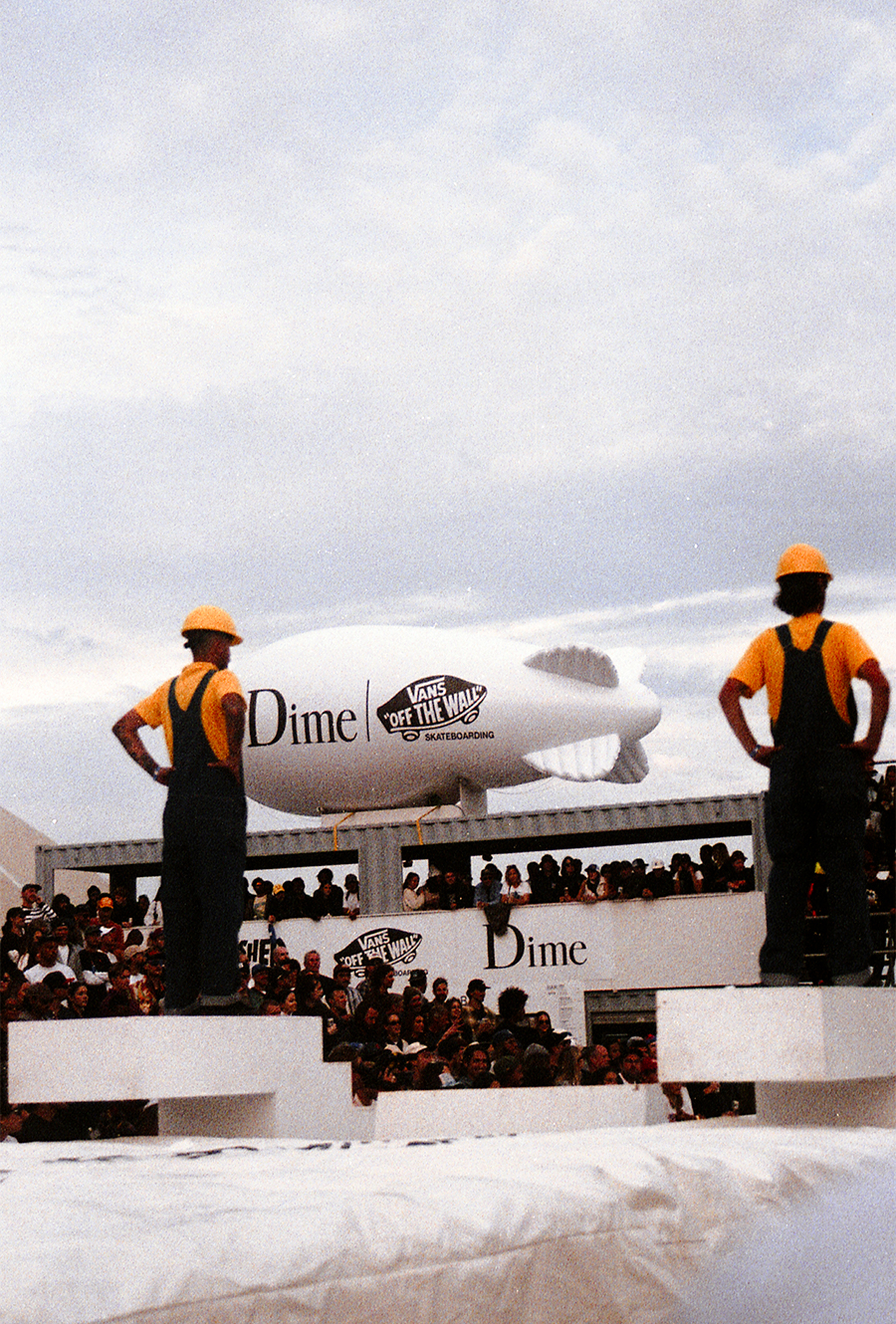 The venue space had a pretty epic feeling to it, and not in the “Whoa, that was totally epic, dude!” sort of way. I mean it really felt like you were there to witness a spectacle, something more like Wrestlemania, where it was obvious no detail had been spared. 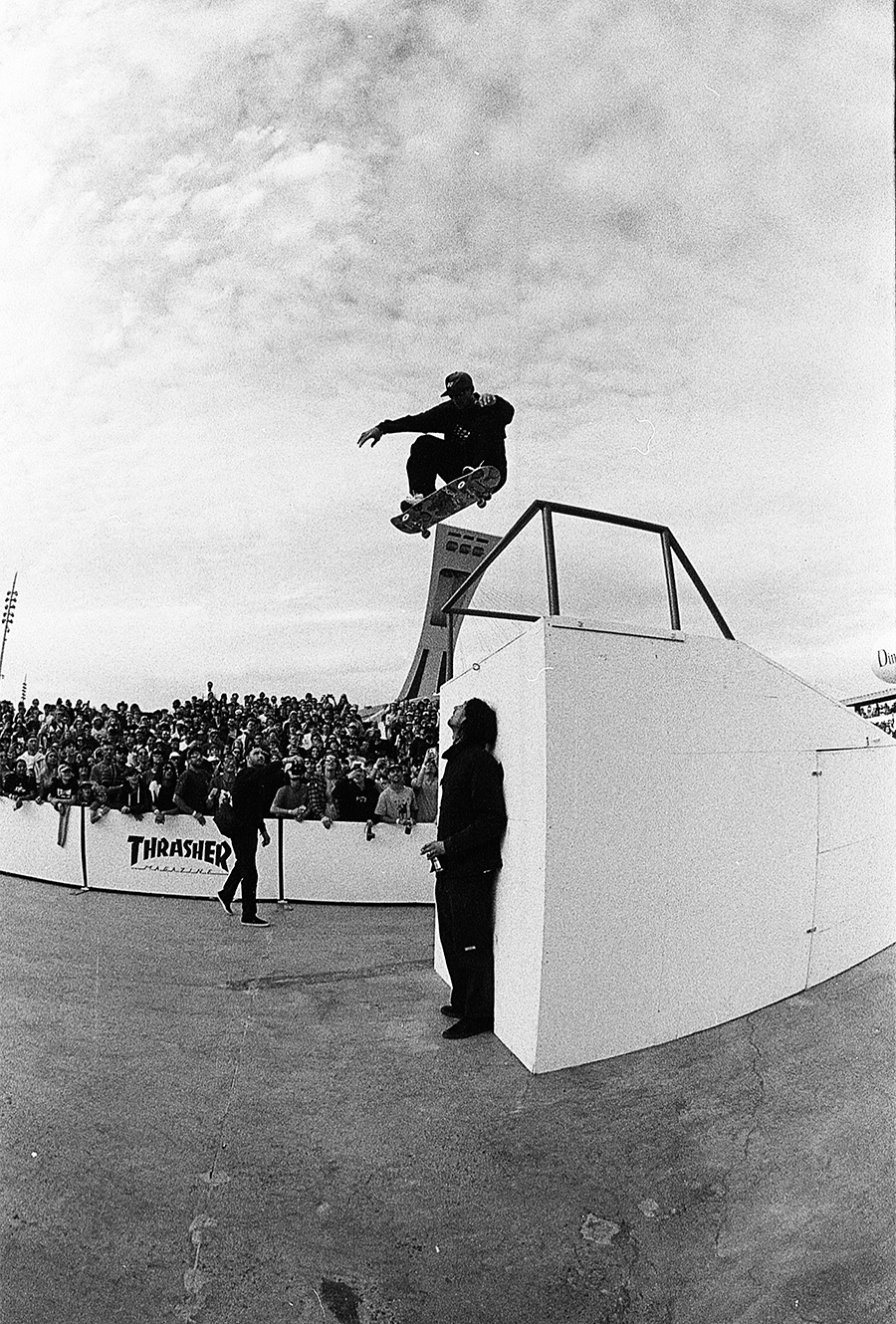 By now you’ve all seen tons of clips and pics from this expanding bump to bar (and every other obstacle, if we’re being real). This thing reached a crazy max height that towered over everyone in attendance. Here’s John Shanahan with a nollie front 180 that’s way over Evan Smith’s head, who’s easily 6’2″.

We were joking around that everyone was basically skating a Hollywood 16-height drop without realizing it, which now that I’m seeing it again, may not be that far off. 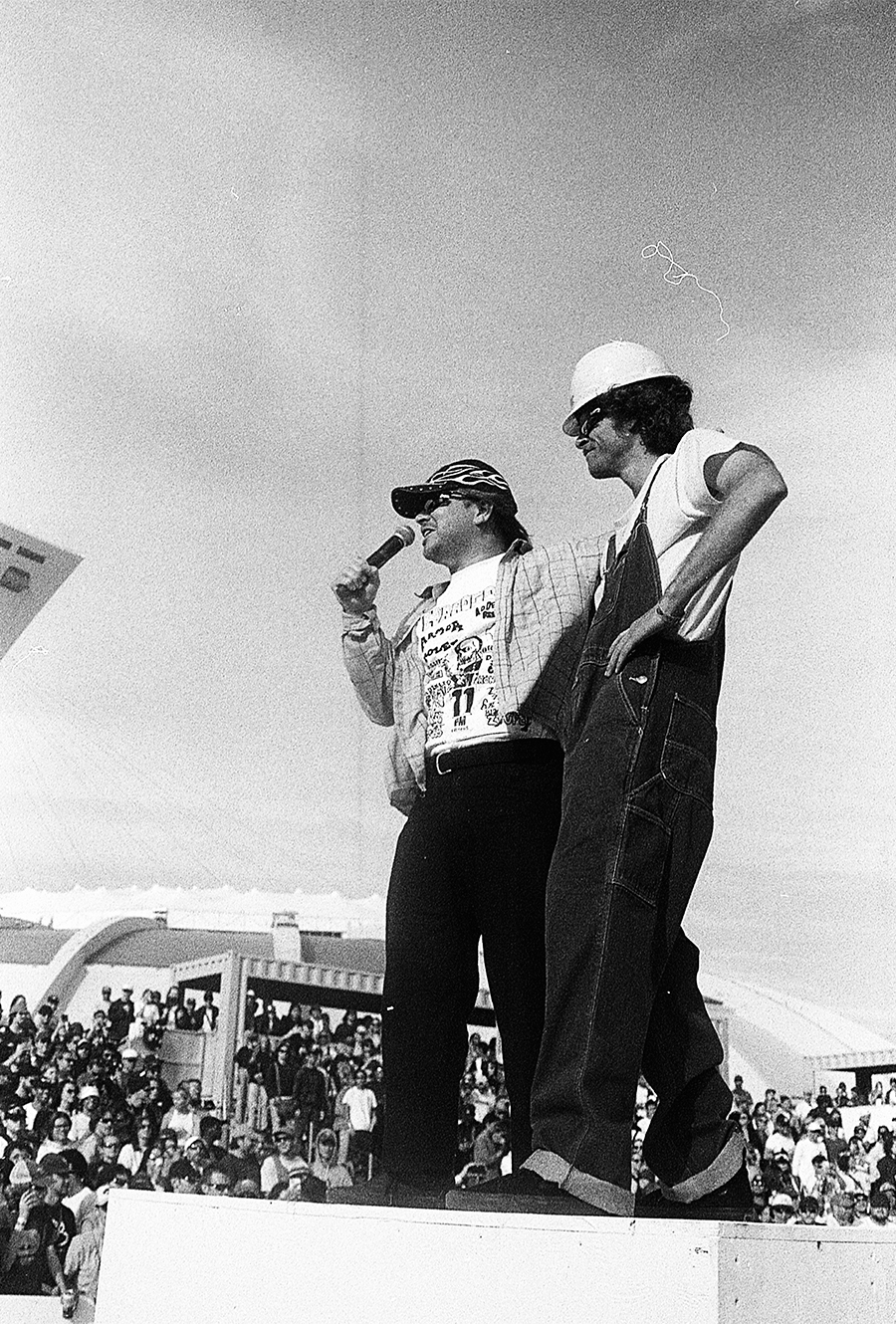 Head MC Conor Neeson handled the mic for the event as usual. It turns out he’s actually the singer of a hardcore band called Faze from Montreal that played at the closing party on Sunday. Shouldn’t have been surprised about that one. 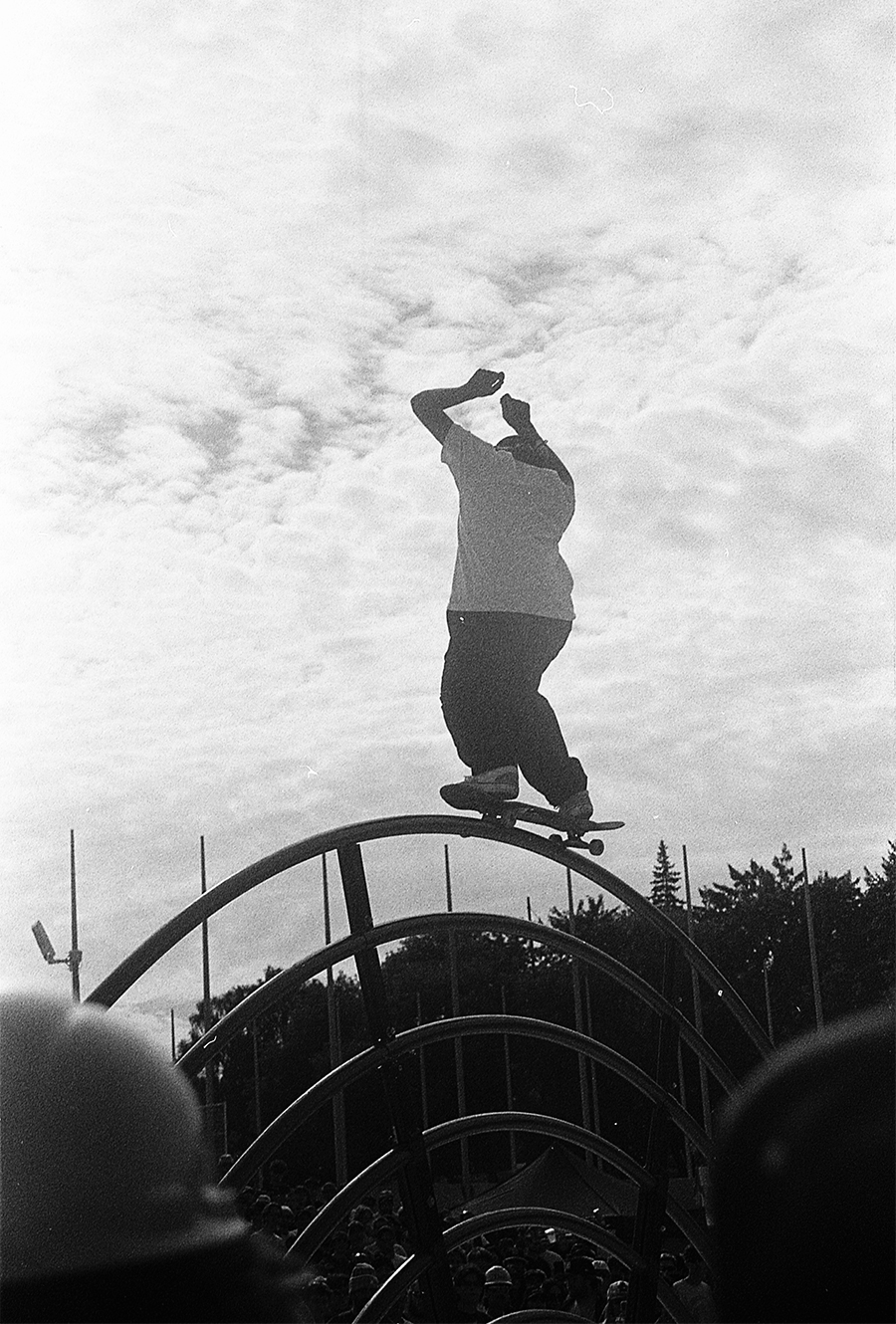 The expanding rainbow rail reached a fitting seven levels high—that’s the same number as colors in the rainbow if you went to kindergarten. 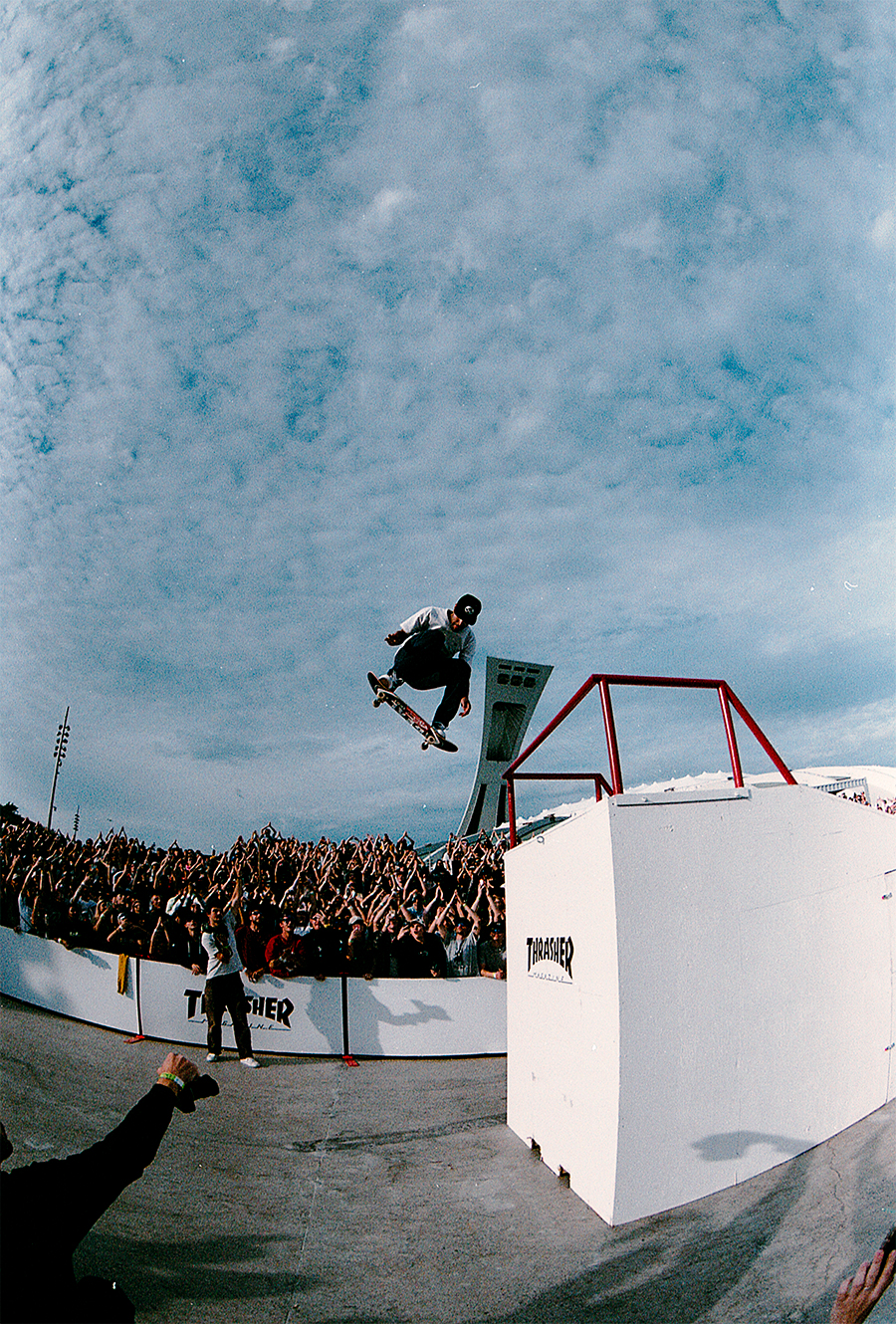 The famous Joe Valdez hands were everywhere throughout the day. If you don’t know the lore, there’s a whole backstory, but they’re basically thrown up as a way to hype people up to get their trick or just used as a sign of approval.

It’d be kinda funny if the Valdez hands were just adopted by culture at large. Instead of your homies going “You got this!” before giving a speech or asking someone out, it could just be a bunch of fools throwing up Valdez hands all the time. 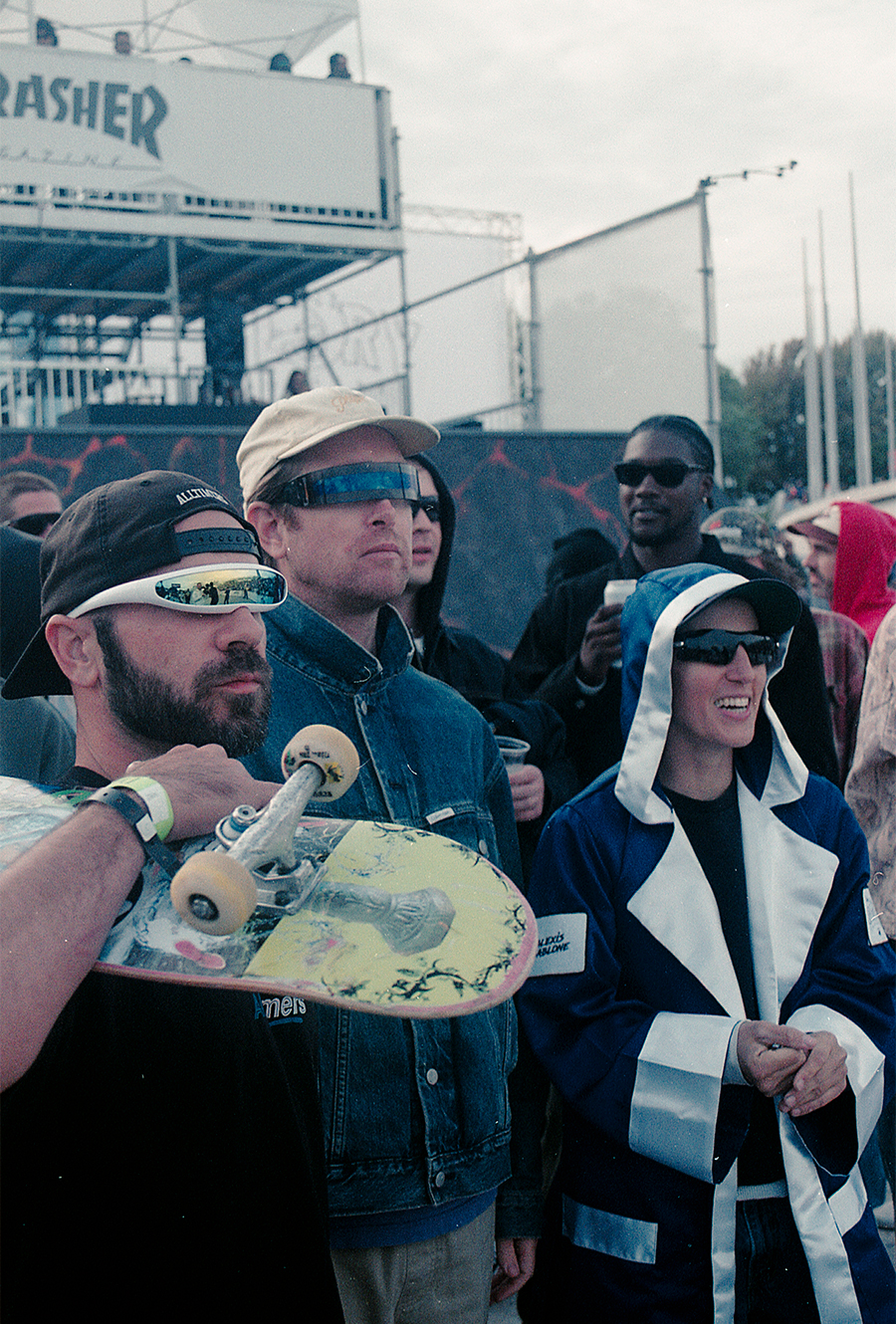 Here’s Zered Bassett doing his best Cyclops impression ahead of the Game of Skate between Alexis Sablone and Breana Geering. There were so many different iterations of the famous “speed shades” going around, and Dime handed out a free pair to everyone in attendance. I seriously don’t know where you would even find these shades, so respect to Zered for being on the cutting edge of fashion. 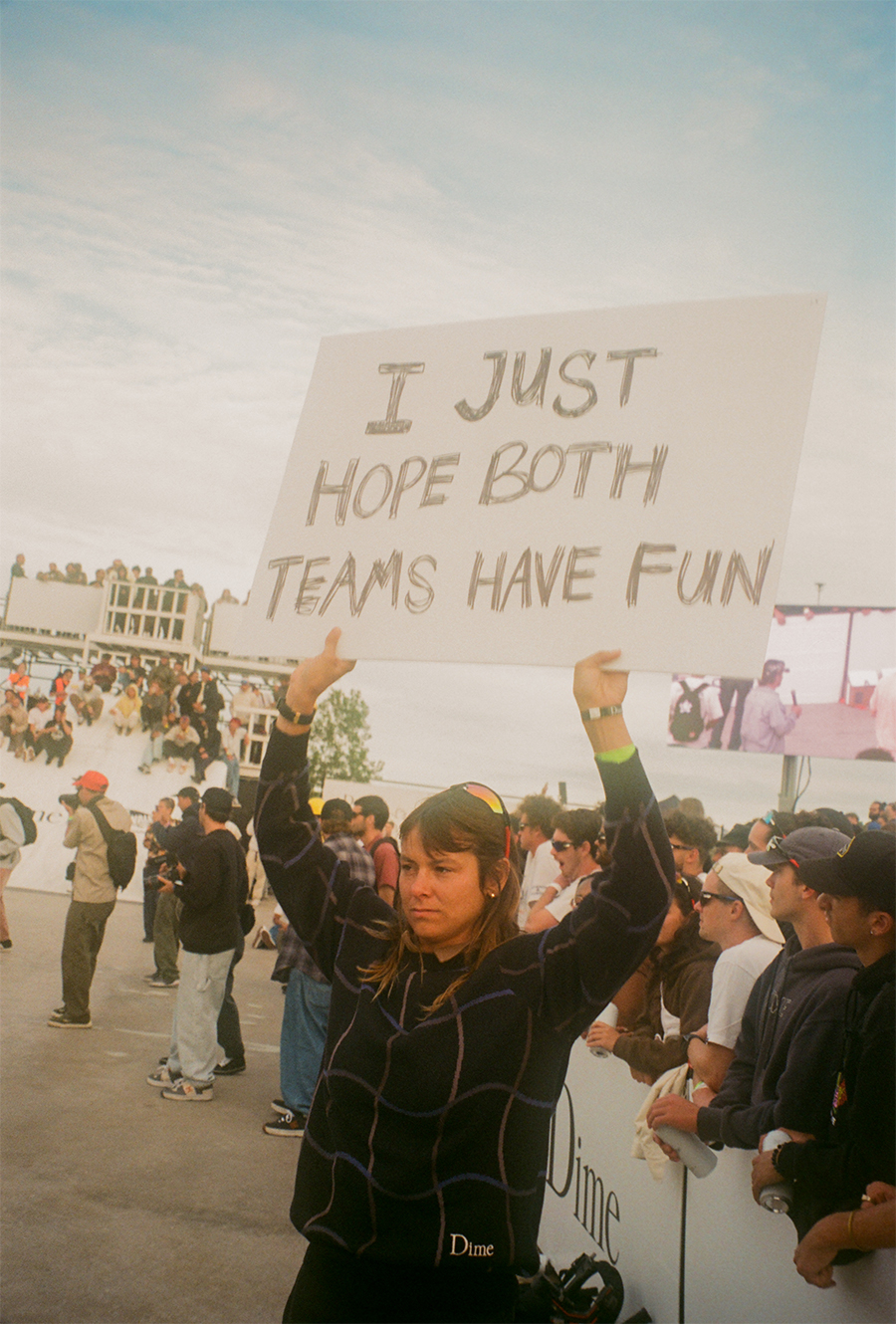 Nora trying to be neutral. Doesn’t work like that! 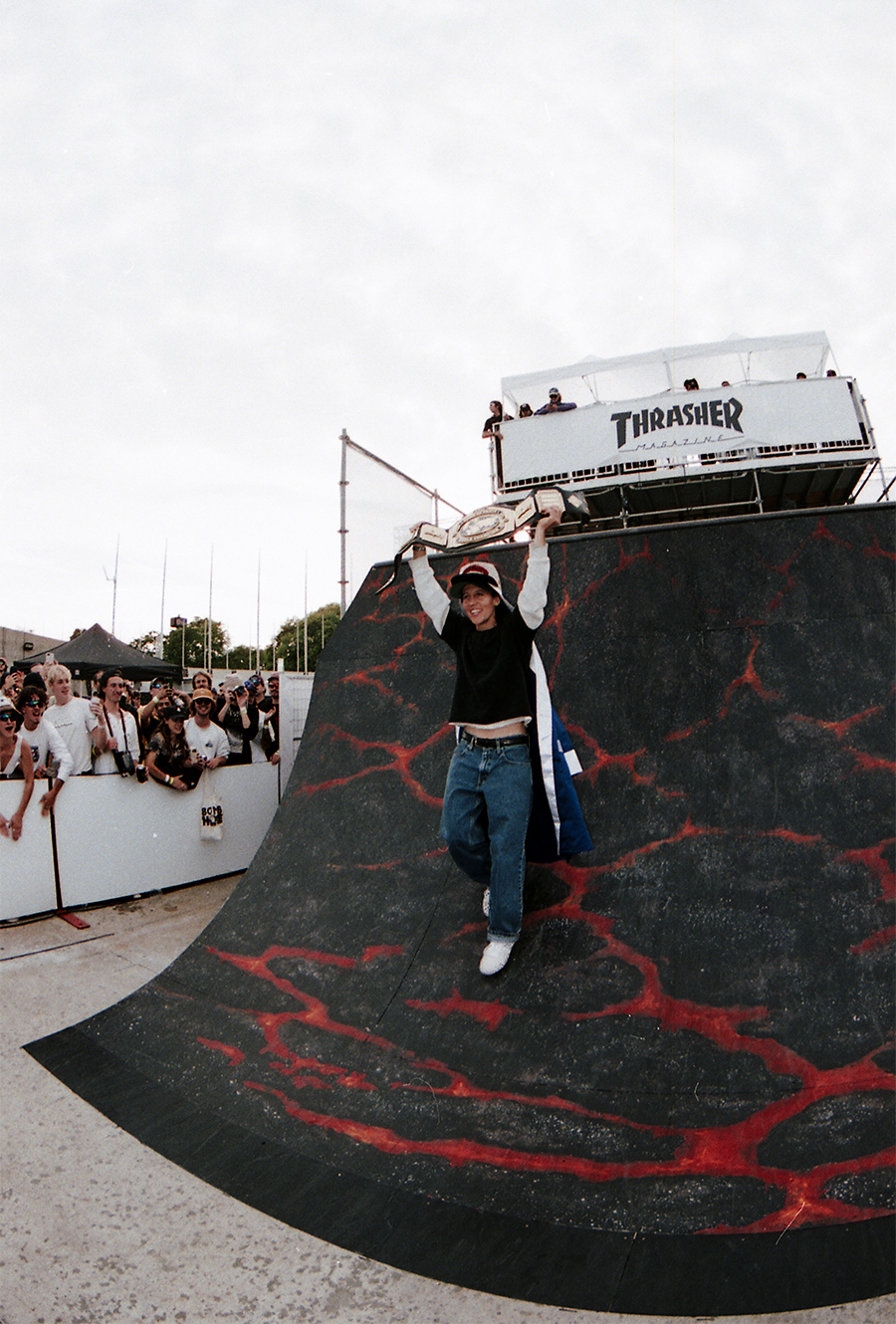 Alexis came out on top, representing for the US and East Coast. Can’t say we were surprised, but we’re also biased. She did grow up skating flatground with PJ Ladd during his peak, which is like playing pickup with Lebron. 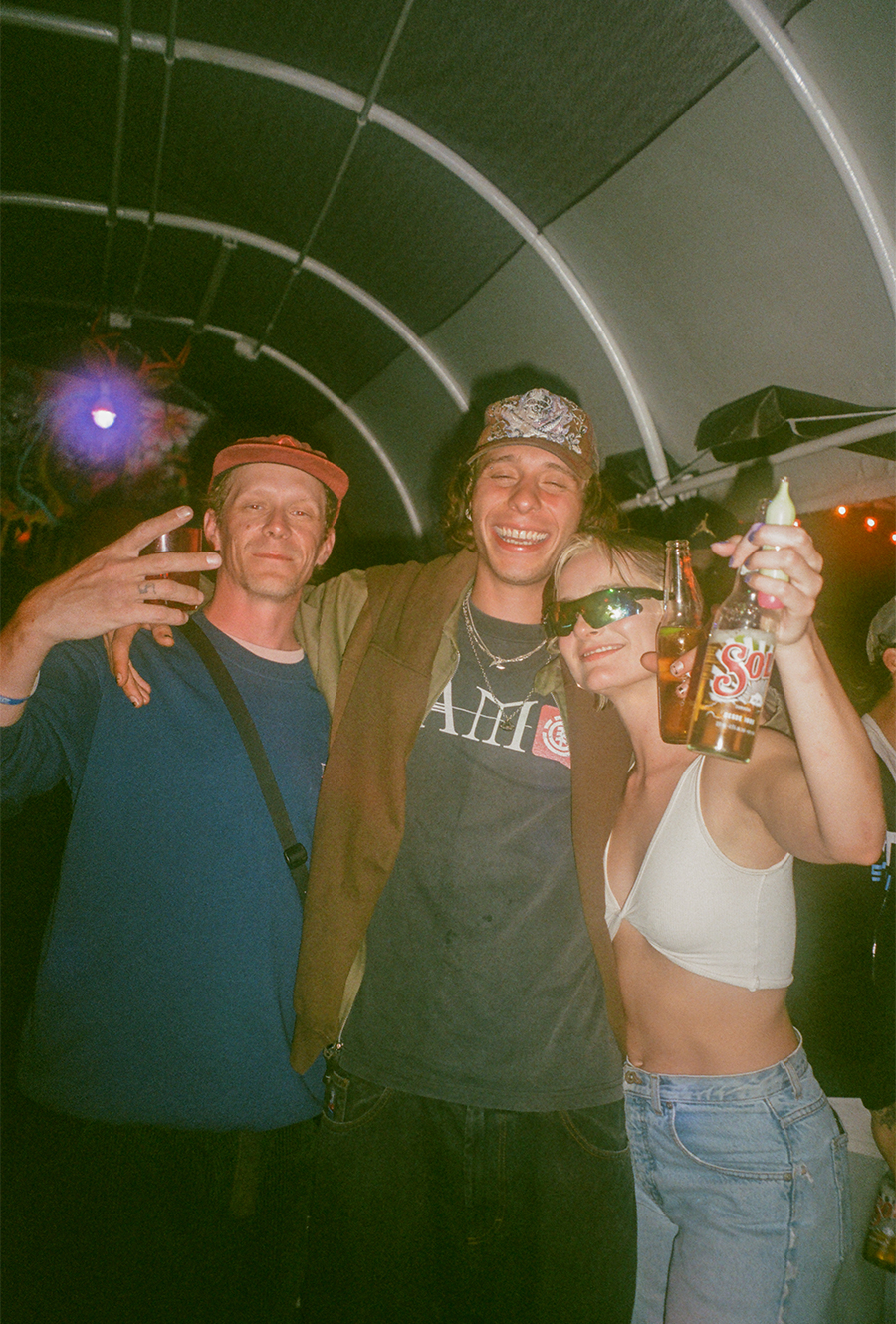 After the contest wrapped, we headed out for a night of drinking and wandering around. Saturday we hit up the usual spots on St. Laurent, Apt. 200 and TRH Bar. TRH is your classic dive, except it’s got a bowl in the back and a secret mini ramp and memorabilia gallery upstairs that you need the owners/managers to take you to. In America they would never let you skate a bowl in a bar with alcohol, they’d prefer to just casually sell you a firearm. 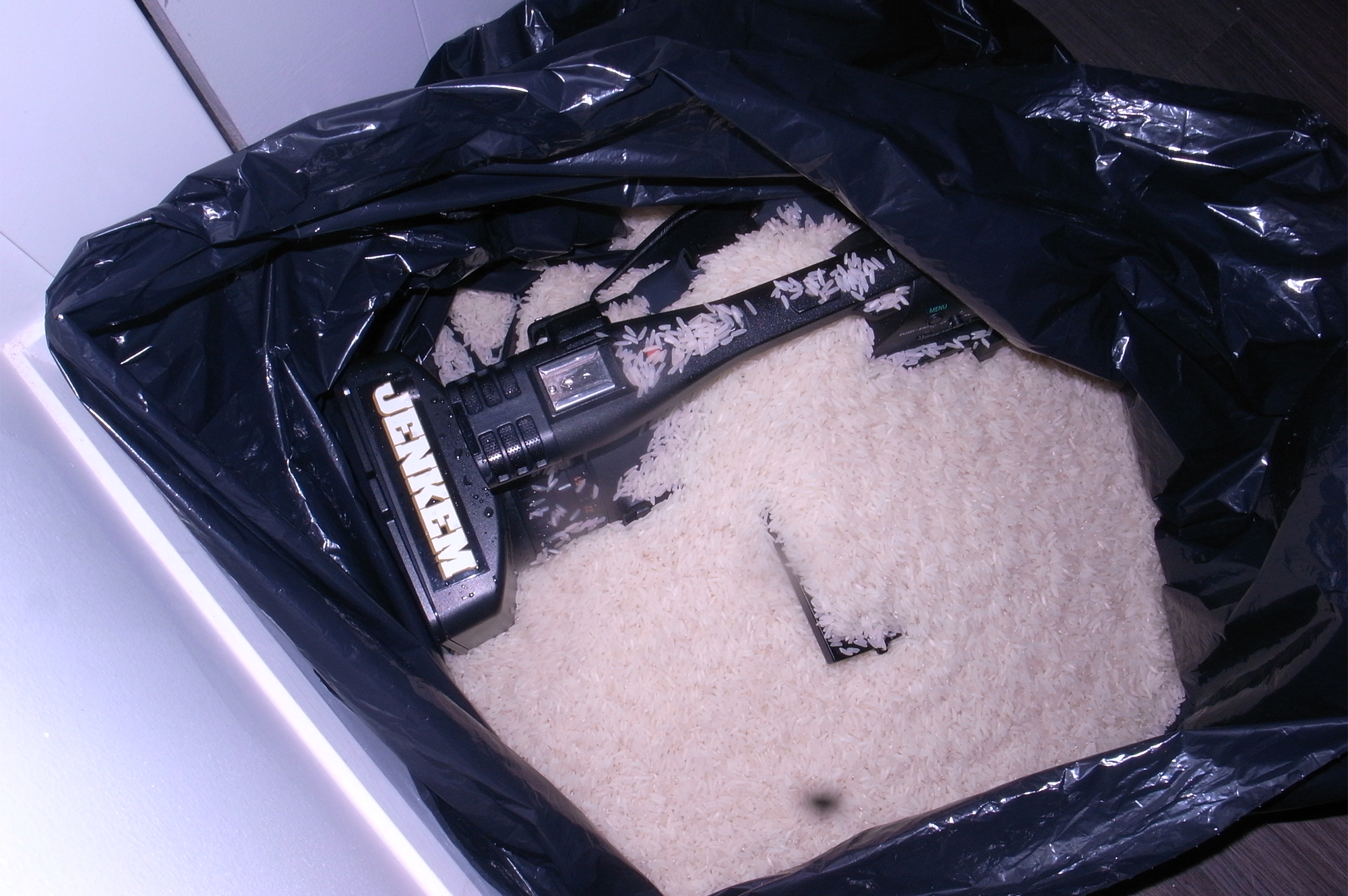 The rain hit hard on Sunday, but that didn’t stop people from coming out. It was pretty miserable in between tries, to be completely honest, despite how stoked everyone is in the footage. I was incredibly hungover, hadn’t eaten in 24 hours, it was cold, the raindrops were heavy, and even if you had an umbrella they were coming at you sideways. Seeing all the tricks go down in person definitely made it worth it, though.

When we got back to the Airbnb, we realized Ian’s camera had shit the bed and the screen had gone fully white. He had to throw it in some rice to try and suck all the water out and rescue it before it was fully fried. It ended up working, so we left Canada with zero casualties.

Despite the rain and close call with the camera, we have nothing but good memories of the weekend, which felt more like a week (in a good way). If you’ve never made it out to one of these, this is your reminder to make it happen before you’re old and jaded.