A LOOK BEHIND “THE SKATEBOARD HERO WHO FOUGHT A TERRORIST”

In June of 2017, three terrorists launched a stabbing attack on the city of London. While people fled the scene of the attack, a selfless skater named Ignacio Echeverría was crossing the London Bridge after a session with his friends and came face to face with the terrorists. He grabbed his skateboard and began swinging at them, successfully saving the life of a French woman, but he was stabbed while defending her. He later passed away due to his injuries after the heroic effort.

Ignacio’s actions were applauded by media all around the world, and most recently by filmmaker and skateboarder Tim Crawley. In a new Vice documentary, Crawley tells the story of Ignacio’s bravery and lifelong dedication to justice with the help of Ignacio’s close friends and family.

Ignacio’s story is one that can inspire everyone, not just skateboarders, so we hit Tim up to talk about the process of highlighting Ignacio’s heroism to the world through his new doc.

How do you think that Ignacio can be a role model for all skateboarders?
I think what really defined Ignacio was that he was a lovely guy with a strong idea of what was right and wrong. That was what made him jump into that situation without a second thought. What I really got from speaking with his family was that it was who he was, and he wasn’t afraid to show it. I don’t mean he was some tough guy keen on getting into confrontations, quite the opposite in fact. He was a quiet and reserved guy by all accounts.

I heard many instances in his life where he just wouldn’t put up with something if he thought it was wrong. So in that sense, I think he can be a role model to us all. Stand up for what you believe in and take a stand against what you don’t.

I don’t think people should start running into life-threatening situations and putting themselves at risk after seeing what he did. We all admire what he did, but I think everyone, myself included, would much rather he was still here for the sake of his family and friends. I mean, just look at the huge loss and amount of trauma that those close to him have suffered. I’m a father, and I can’t begin to imagine what his parents have gone through.

I think, mainly, he would like other skaters to be inspired by him to be the best humans they can and to look after themselves and others. Have fun on your skateboard and don’t take it too seriously. Be good to each other and look out for people. Help those who are in need. Have respect for everyone. I think those are the main things I’ve learned that were important to him. 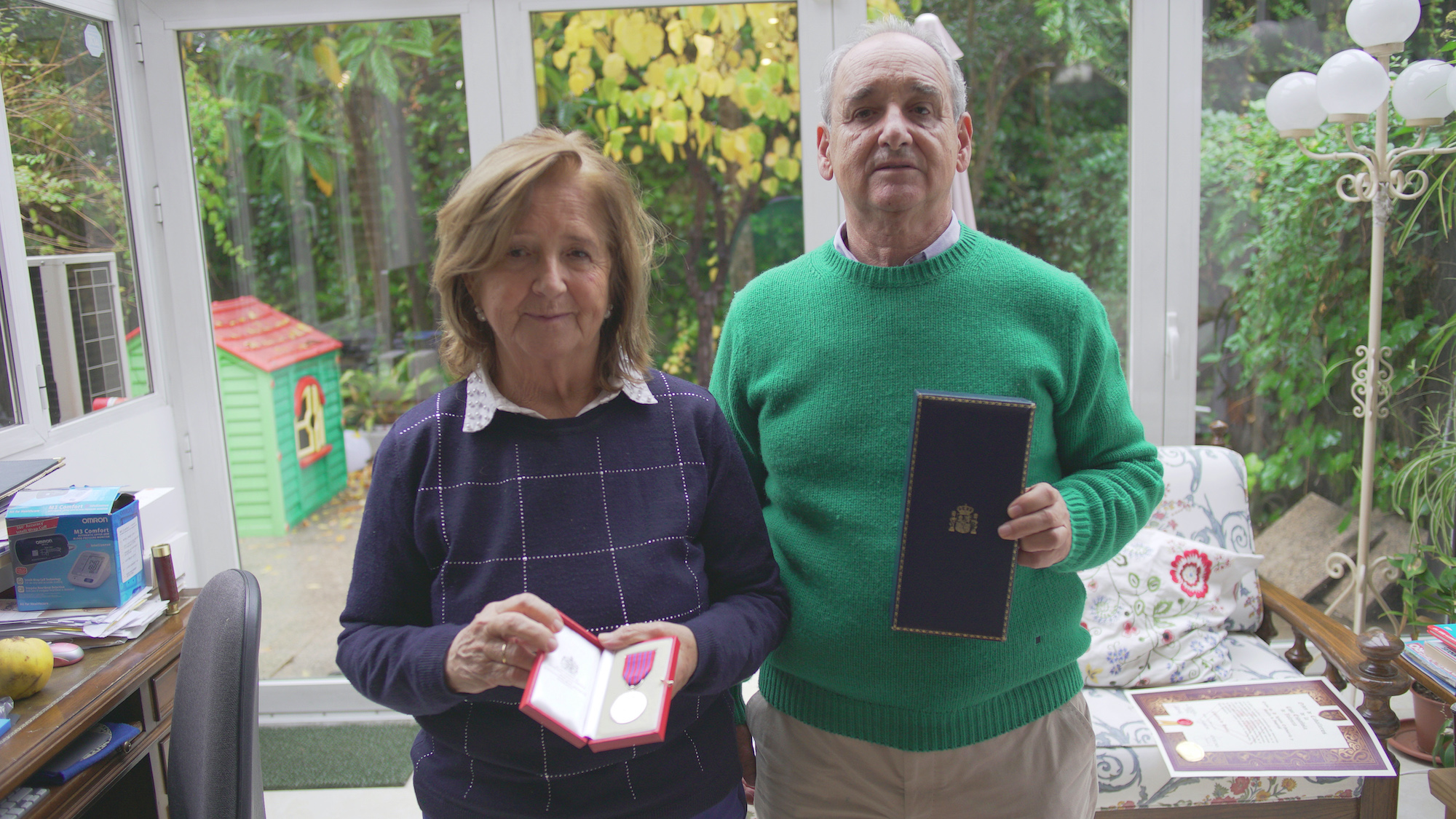 What was the reaction among Ignacio’s friends and family when they heard about your project? Did anybody say no to filming with you?
Mostly, people were super keen to speak and their reasons for doing so seemed to be the same; they all did it for Ignacio. His selflessness and love for them in life seemed to bring out their love and selflessness for him in this process. They all put any insecurities about speaking to me to the side so that they could do their beloved Ignacio justice.

You can never underestimate how daunting it could be to talk about something so traumatic and sad in front of a camera with someone who you’ve probably spoken to just a few times on the phone and only just met. I try to approach people in the right way and make them feel comfortable. I just think about how I would feel if someone asked me to speak about something like this and what would matter to me. It sounds cheesy, but I spoke from the heart when I contacted them.

“They all put any insecurities about doing it to the side so that they could do their beloved Ignacio justice.”

As both a skater and a Brit, what was your initial reaction when you heard about Ignacio’s role in the attack on the London Bridge?
I cried my eyes out. Honestly, it hit me so hard. I remember being on a train up to London and really struggling to hide the tears streaming down my face. I think it was the combination of how close to home it was because it could have been me or any of my friends. So I felt a huge amount of empathy for the situation. But then also, a fellow skateboarder made the ultimate sacrifice giving his life to protect others and it was being broadcast around the world. That was something I never thought I’d hear, and I knew the world was hearing it too.

Most of our lives we’re looked down upon by a large portion of the public. But when this happened, we all stood up and held our heads high – just like those guys in the film who held their boards aloft at the vigil in Ignacio’s hometown. It’s important to state that I would swap that feeling of pride at any moment for Ignacio to still be alive for his loved ones. 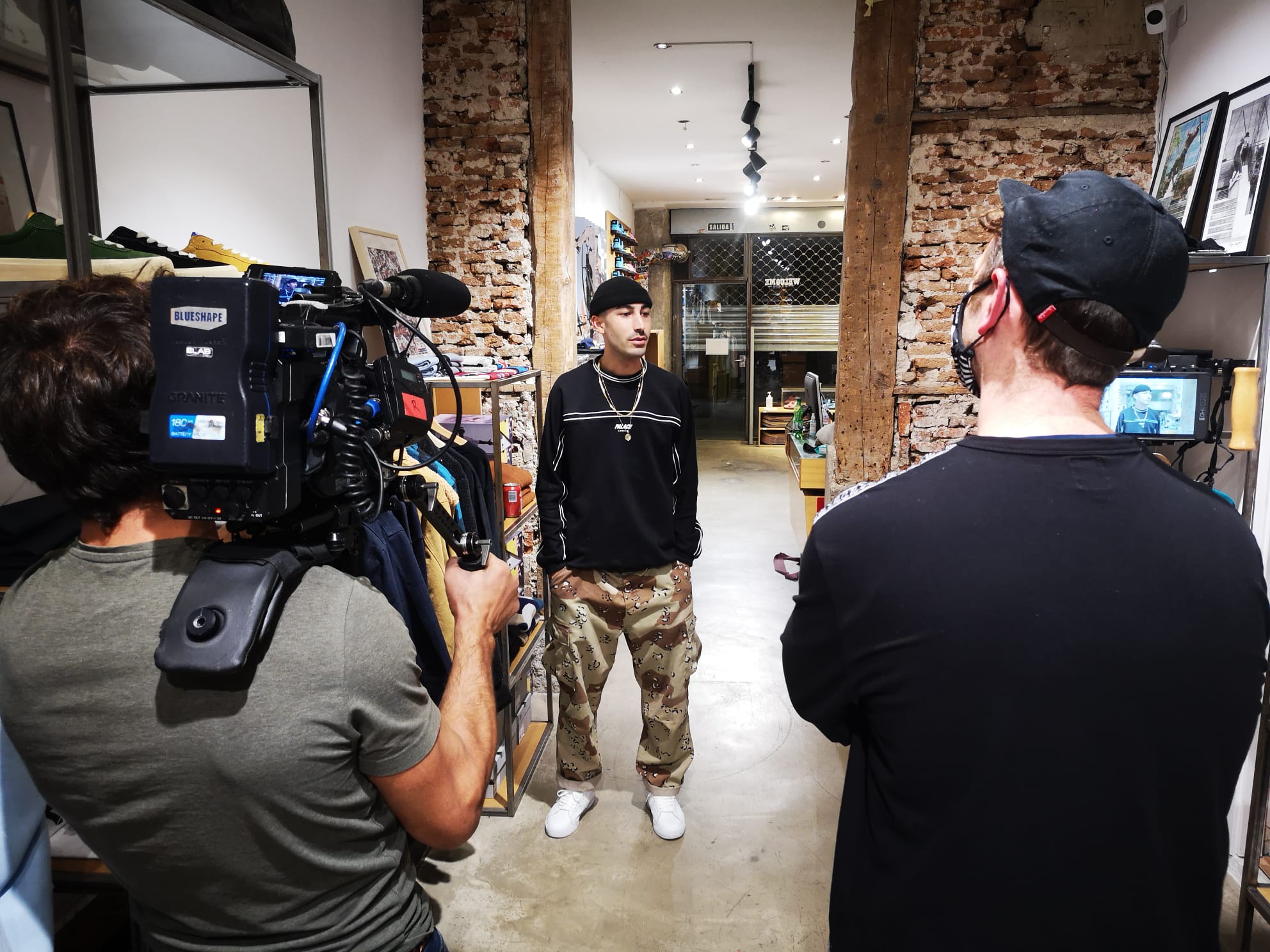 What skate filmers would you like to see film a documentary?
Strobeck, I think he would make a cool documentary. He very much documents what’s happening but in a very stylish way, and documentaries don’t always have to be sit-down interviews.

“It’s quite amazing, I think, the amount of influence skate videos have creatively on filmmaking around the world.”

Do you think that Strobeck’s skate videos can be considered art?
Yeah, I think his videos are massively artistic. I love them to be honest. It’s funny because I get the impression he just naturally created that style while he was enjoying making his videos. But you know ad agencies around the world are probably plowing huge amounts of money into trying to replicate it and still can’t do it right.

I know this happens because I’ve been in a few of those meetings and chuckled to myself when some big wigs were passing around the clip of Owen Wilson in Yeah Right! with his “Front salad, back salad front blunt…” saying “Yeah, we want to capture something like this.” It’s quite amazing, I think, the amount of influence skate videos have creatively on filmmaking around the world. I feel like I’m constantly seeing stuff on TV which is ripped off from skate videos.

Do you think Strobeck has a foot fetish?
I have no idea! But he makes me wish my cameras had electronic zoom controls like his. 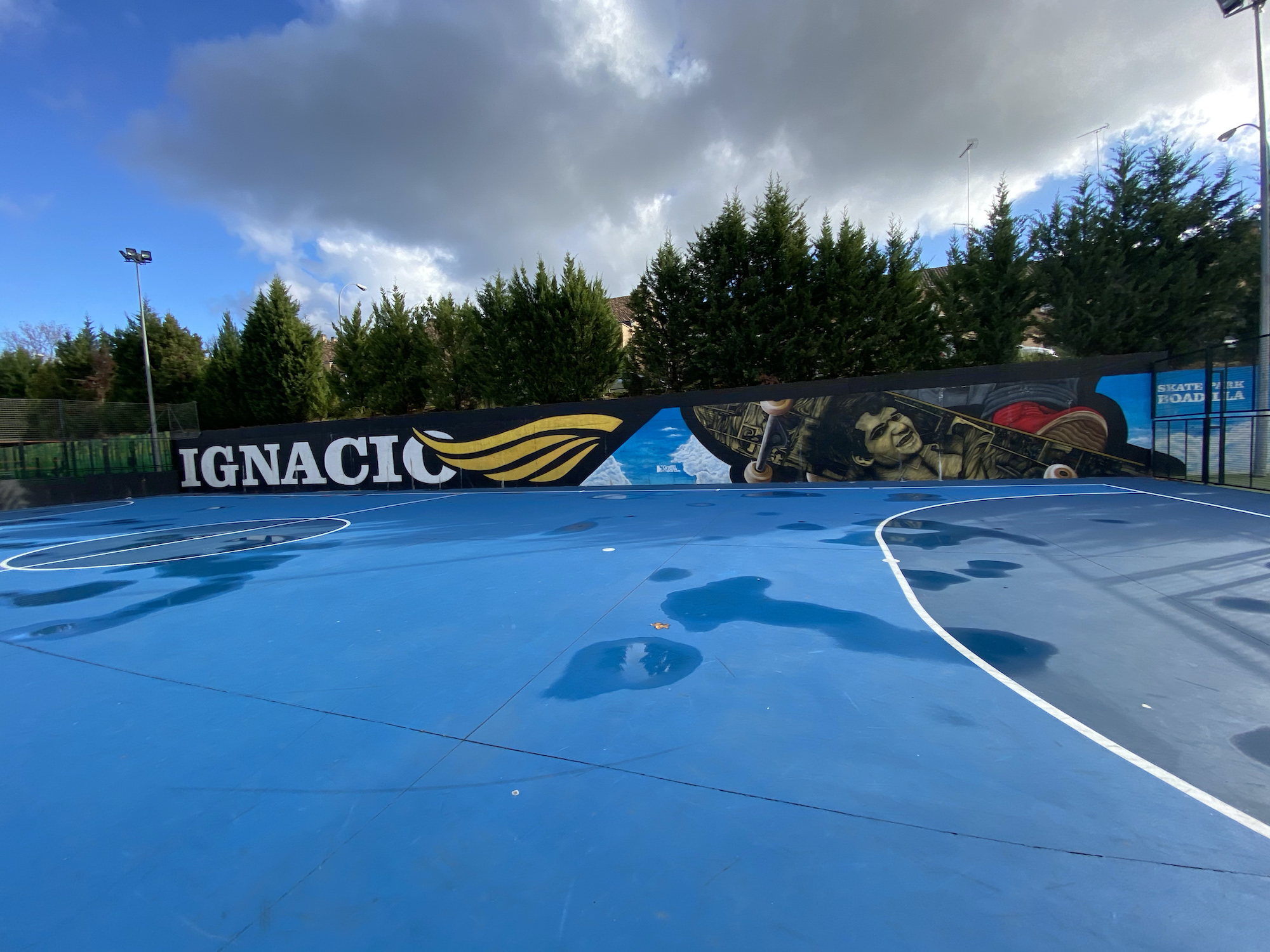 You seem to be one of the top skateboarders in media outside of skate media. How did you find yourself in this position?
[Laughs] That’s nice of you to say but I would obviously dispute that.

It sounds cheesy, but I would say I got here by following my heart. Ignacio’s film took about a year and a half to get off the ground and I made it my life mission to make it happen. Something just drew me to it and I knew I could make a film and get it out there to the world.

We were supposed to head out to Madrid and make it in March/April of 2020 but COVID hit and it all got canceled. Then about six months later another skater/film-maker named Niall Kenny helped me get back in touch with Vice, and I showed them the idea I had for how we could make the film, and it went from there. As soon as the film got commissioned, the UK went back into lockdown and travel restrictions got tightened, so I was worried that it was going to fall through again. Thankfully, we were able to call it essential work to get it done.

And here we are with this lovely film that has shared Ignacio’s story far and wide. Judging from the messages I’ve been getting people are watching it and feeling how I felt when I first heard the story. That mixture of emotions of pride and sadness is an intense one, but most importantly Ignacio’s story has reached a huge number of people and he’s touched every one of their hearts. 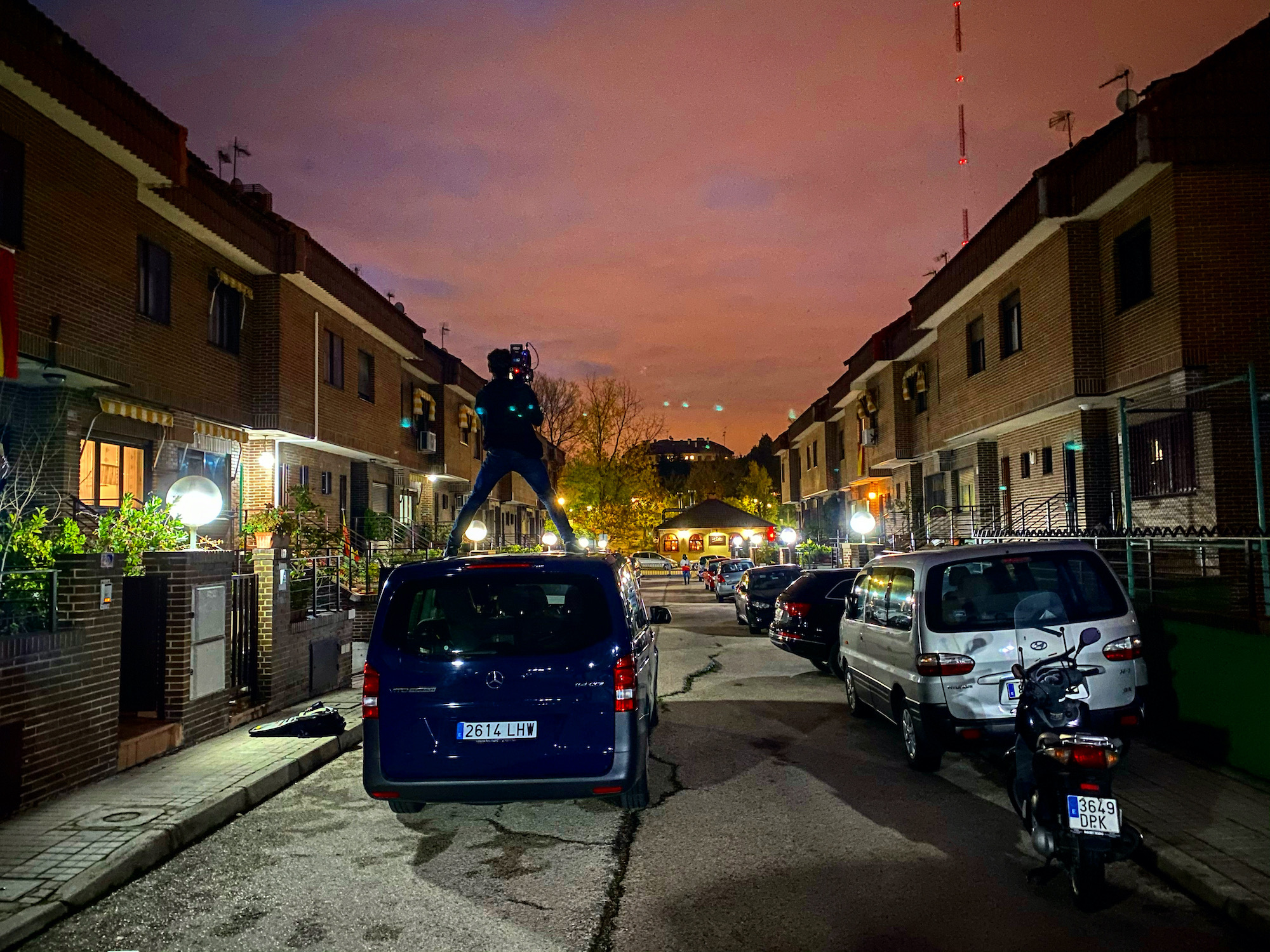 Do you believe that there is a large enough audience for skateboarding outside the core group of skaters?
Oh yeah, definitely. If the subject matter is one that transcends skateboarding such as mental health, addiction, or in this case, an incredibly unique person, then there definitely is an audience.