The Jenkem office has taken trips to most of the cool continents (four out of seven ain’t bad, and Antarctica doesn’t count), but one place we haven’t ventured to yet is Australia. Luckily we have friends there who hold it down, and over the course of this year two of them created this special video just for us.

The filmer, Izrayl Brinsdon, had this whole concept about how he’d mix 16mm film with VX and HD footage to showcase skating in the best possible light. But after we saw some preliminary clips from the skater, Rowan Davis, we didn’t really care how it was filmed. Rowan is so good, he could have been filmed with a leaf on a stick and we would have been happy.

Thankfully, Izrayl doesn’t actually film with twigs, and the end result was an eye-catching look at both Rowan and their hometown of Newcastle. Newcastle used to be called “Steel City” because of its booming steel industry (hence the molten metal at the beginning of the vid). But now it’s mostly crusty spots near the ocean, which is also quite nice.

So please take a moment to wash your eyeballs in this delightful video from Rowan and Izrayl, then read our interview to find out what kind of myths American pop culture teaches about Australia. 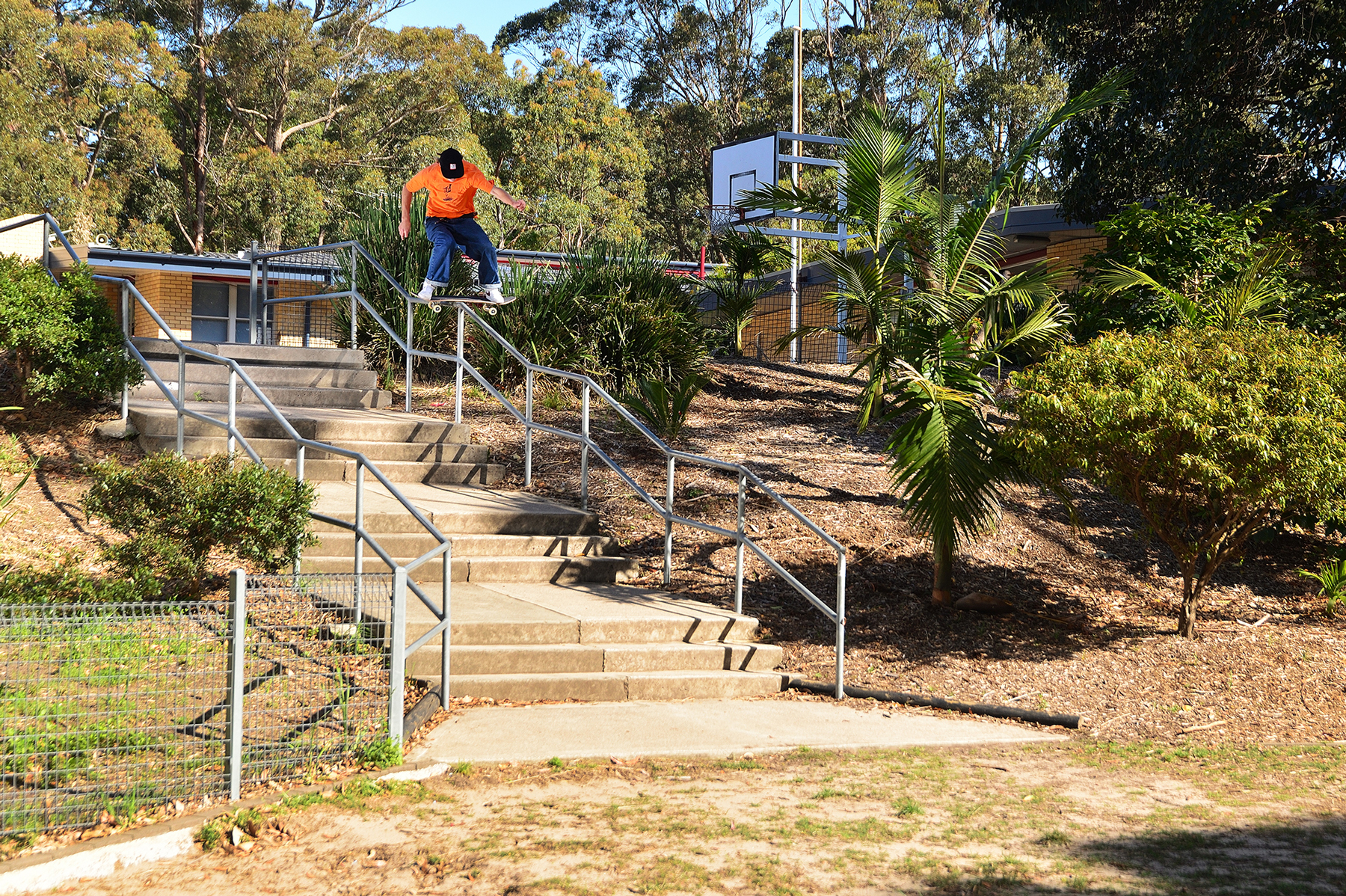 Since you live in Australia, have you ever ran into a crocodile or anything wildlife like that?
Nah, not yet, but there was a snake right next to the window where I sleep yesterday, and it was fucking so sketch. This big python. I just don’t fuck with snakes. No alligators, or crocodiles yet.

So you had a python next to your window?
Yeah, because I have an orange tree right next to my window, and there was a python just posted up in the tree. My mom saw it and she was freaking out.

Do you ever wake up with those giant Australian spiders in your bed?
Nah, but there’s definitely giant spiders around. I feel like it’s not as bad as everyone makes out Australia to be. There’s definitely some ruthless spiders, don’t get me wrong. 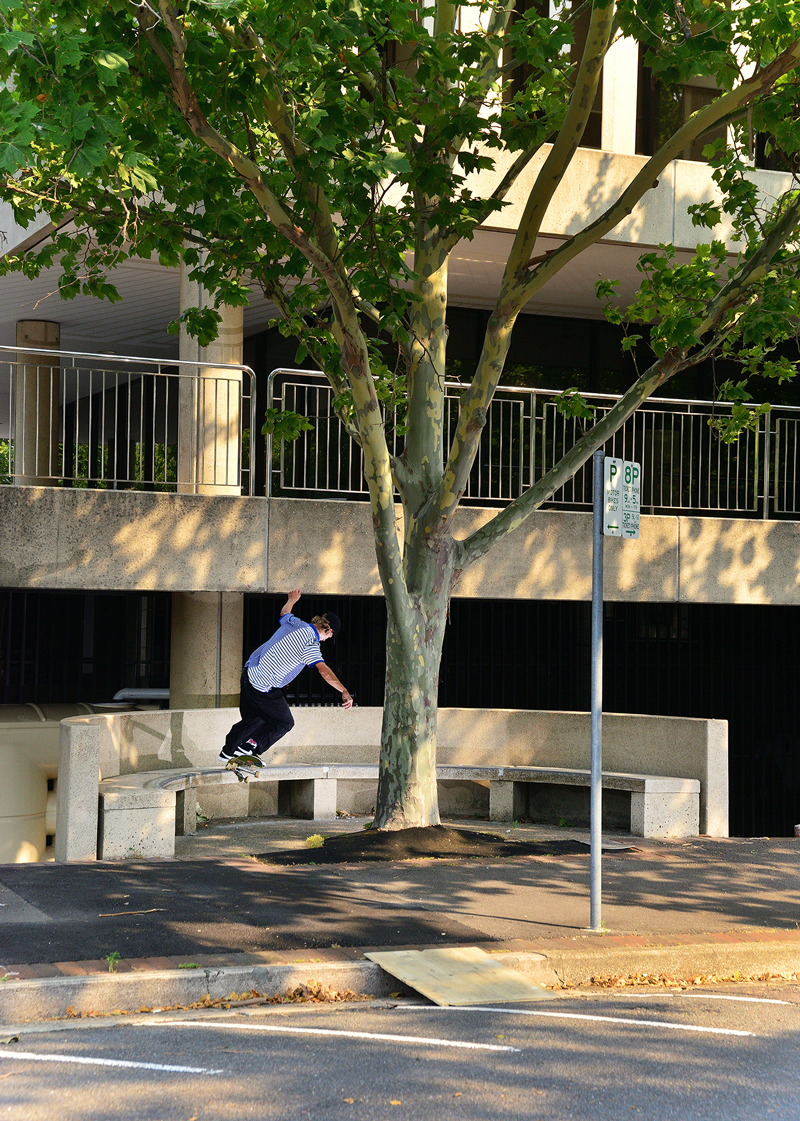 Good point. So another common stereotype about is that Australian women there are way hotter than American women. Do you think that’s true?
Well, I don’t know, I was in North Carolina, so it was heaps of just ruthless sort of people I guess [laughs]. But yeah the girls are pretty hot, they’re all just like blonde and tan beach girls I guess. Which I’m into. [laughs]

What brought you to North Carolina when you came to the U.S.?
It was a trip with Mike Sinclair, just like a Nike thing. I think it’s just that there are so many rails and shit out that way, it suited everyone better to go out there instead of LA or something. 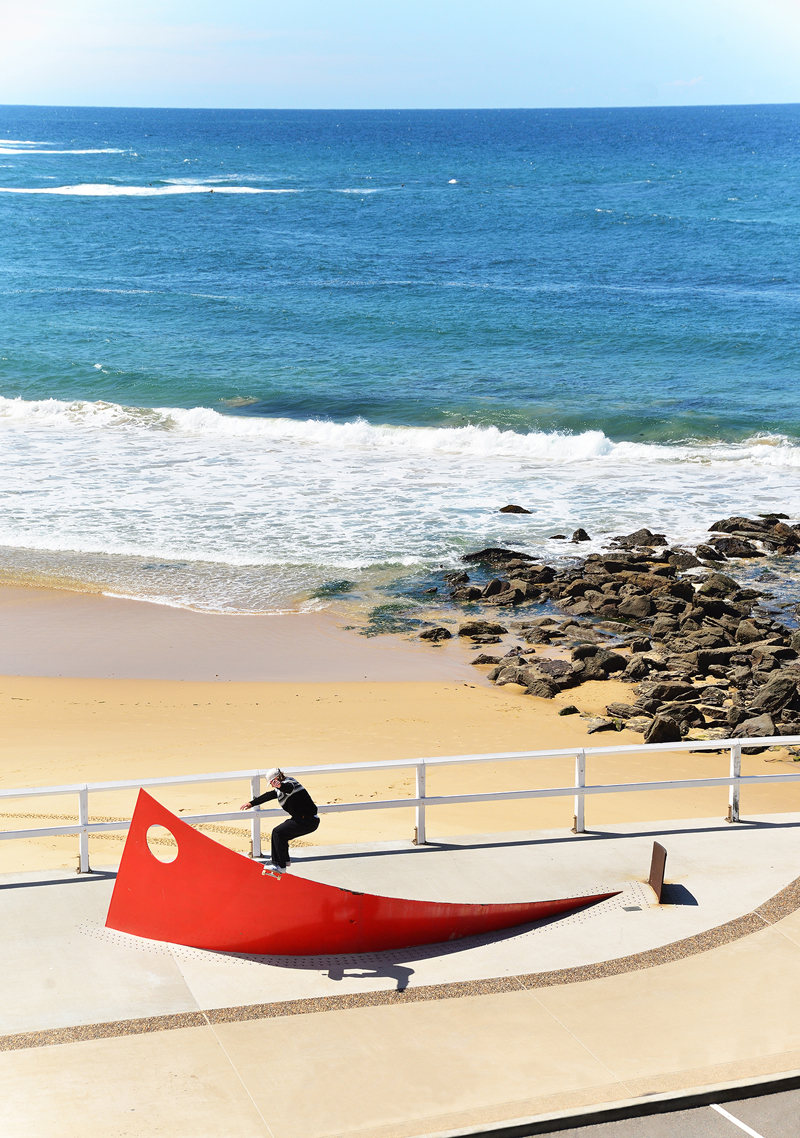 So for this video you worked on for us, did you film mostly where you live in Newcastle?
I think three clips are in Sydney and the rest is all Newcastle. It’s just hard to find stuff in Newcastle, I’m always Google Earthing stuff when I’m at home trying to find suburb house spots. It always sort of works out.

Do people not mind when you skate their houses or something?
When I was in Sydney the other day, there was this drop-down house rail. I knocked on this dude’s door thinking this is a long-shot. I was like, “Would you let me skate the rail?” and he was like, “How fucking dare you ask me that.” I was like oh shit alright sorry. Then he was like, “Yeah man you’re good, I used to skate. You can go for it.”

I couldn’t get enough run-up so I asked if I could run through the house to get some more run-up, and he was like, “Yeah bro that’s fine, no worries.” It was so crazy, this dude just letting me run through his house to skate his rail. It was sick.

Did you get the clip?
Yeah, I did eventually. It was a boarding house and there were four dudes living there. This other dude walked up and he was off it. He was like, “What are you guys doing here?” and I was like, “Just skating the rail.” And he told us he lived there as well, but the other dude came out and was like, “These guys are my friends, don’t worry about it.”

You should have asked for food or something too.
Well I got a cup of water at the end of it. 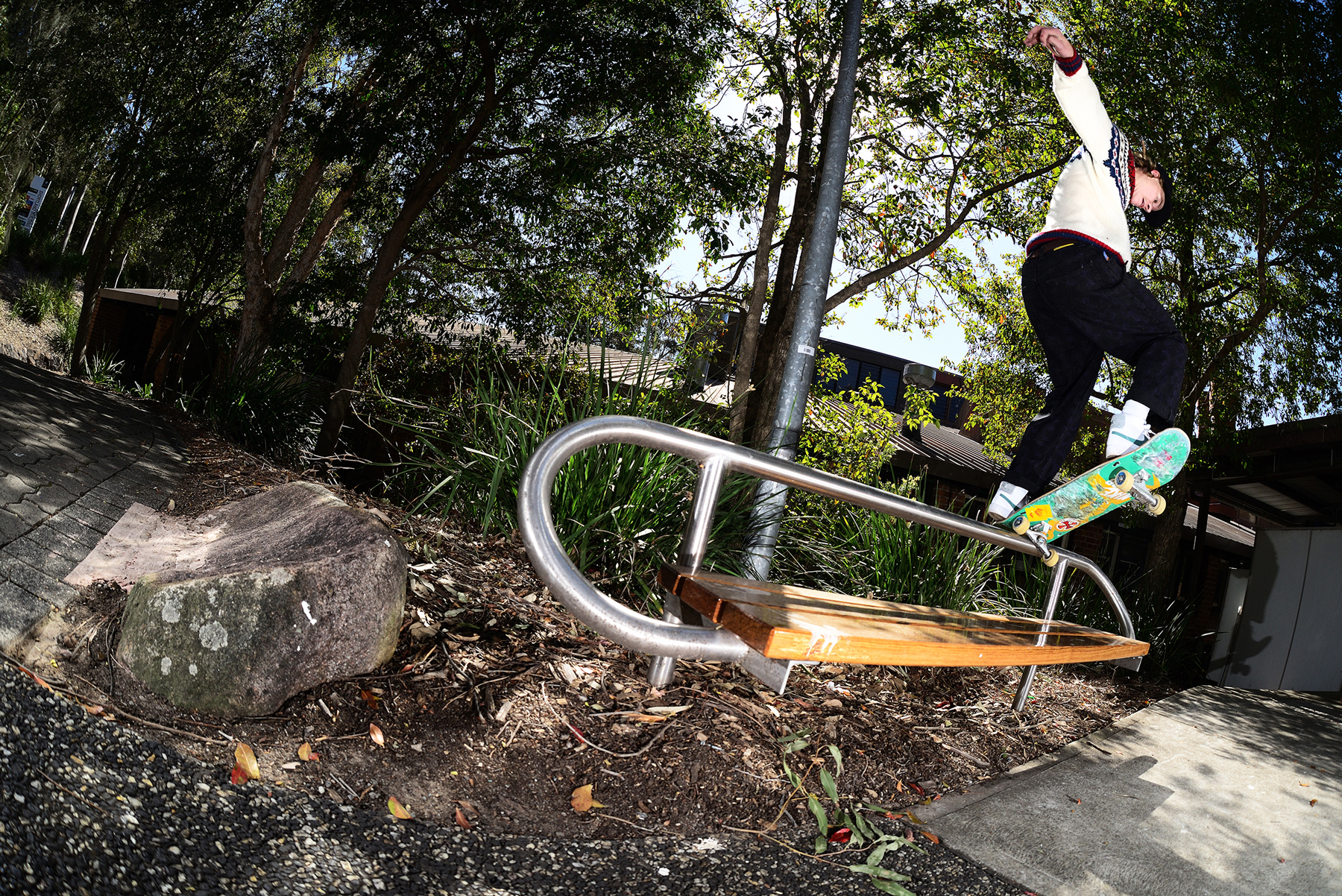 So are you making any money from skateboarding at the moment?
I get a little bit of money from Nike but as for right now, that’s all it is.

Do you do something for work right now?
Right now I’m just a house painter, just a little cash job. I don’t know how long I’ll be doing it for but it’s not too bad at the moment.

Do you like manual labor jobs or would you rather do something else?
I don’t know. If you get a really shit day, it’s the worst thing ever, but I’d rather just be sitting on my ass as well. I really don’t know.

What would make a day shitty if you’re painting houses?
So painting, first thing, wake up at seven am, the boss tells you to wash out the rollers, and it’s like freezing fucking cold, that’s the worst thing ever, and then after that, he’ll probably make you sand the walls. It’s pretty shit. Little stuff like that just builds into one big problem.

Are you in school?
Nah I left school at the end of year nine, ’cause I was sorta over it. That’s when I first started—I had that painting job when I first left school, and then I got fired for being cheeky I guess, and then a few weeks later I got back with them. It’s like two brothers and the dad, and the brothers skate and stuff as well where I live, so it’s kinda easy and convenient.

So you got fired by guys you skate with?
Well it’s like, the little brother is the one that skates, and then the older brother is like 23 or something, and he’s the one that owns it and fired me. But I was being a little shit I reckon, like talking back to them and stuff.

So why did you leave school so early? You just didn’t like being in a classroom?
I just can’t listen and I couldn’t sit down. I didn’t like being in school basically. I hated every minute I was there. I’m glad I left, I don’t regret it. Actually no, there’s one thing, when I used to do skate lessons at the skate shop, these kids would always give me shit because I wouldn’t know math questions. I’d answer them wrong and they’d give me shit about it.

So math isn’t your strong suit?
No, definitely not. But I’ve never had to use the Pythagorean theorem and shit so whatever. I’m at the point now that I have to do my taxes, but have no idea what to do. But thank God I know how to use a Bunsen burner I guess. 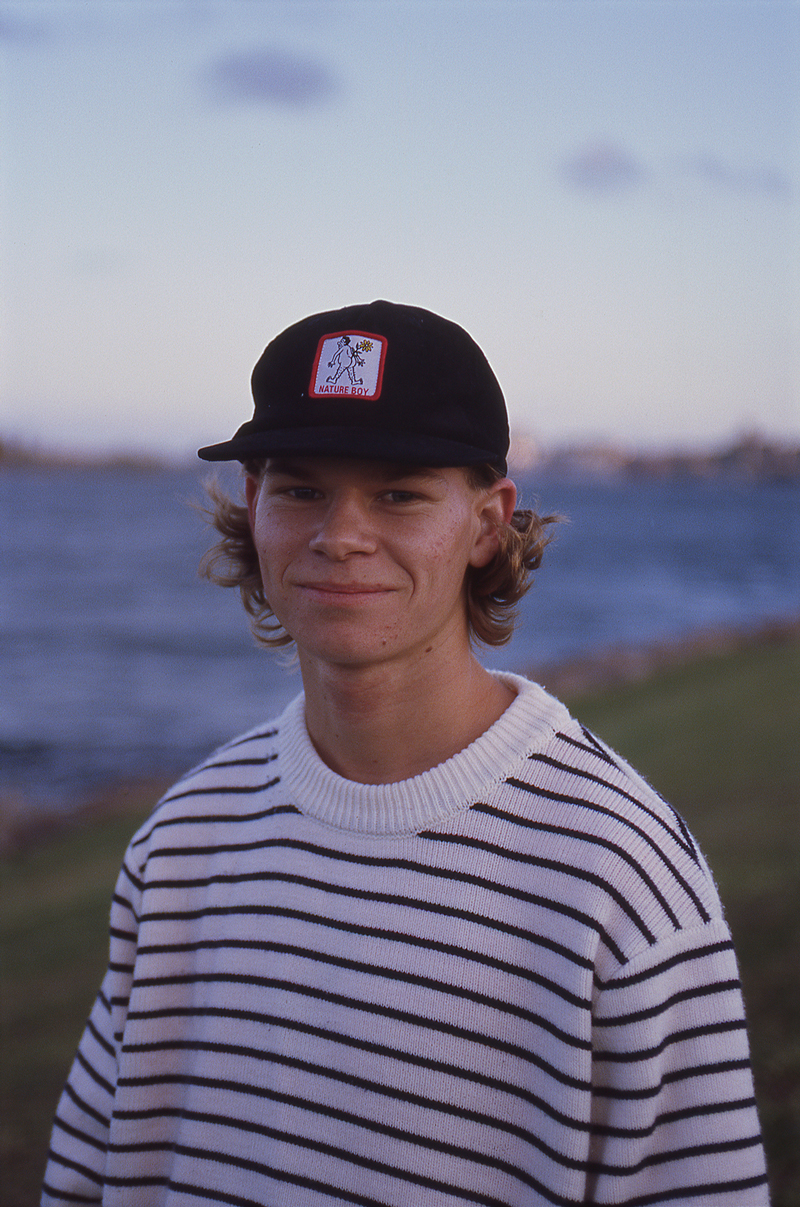 What’s one thing about American culture that confuses you the most?
The food. Heaps of just fucking crazy food. The Sheetz. In North Carolina, there were these Sheetz service stations, and they’d just have the sickest fucking food. Just get like the coolest hot dog and shit. That was sick, my favorite thing I reckon.

Damn, so just the gas station?
Yeah basically, that’s what I was hyped on. The 7-Elevens and stuff, you can get those Big Gulps, they are so sick. We don’t have anything like that here. The only thing we have here is like a large, which is like a U.S. medium I think.

Have you ever done a shoey?
No, I haven’t. I’ve witnessed them but never done one.

Right after your ender trick you should just down a shoey.
Yeah, I will. At the premiere I will. 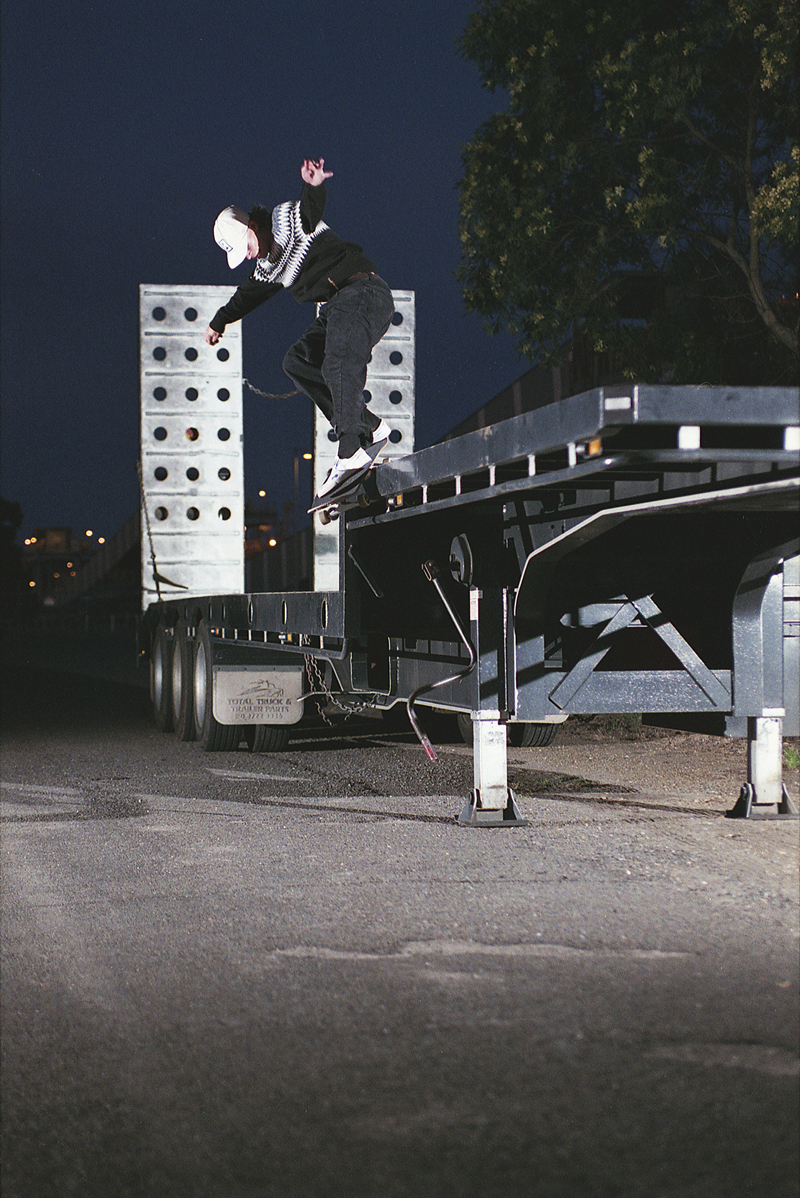 Video by: Izrayl Brinsdon in collaboration with Come Sundown
Photos by: Brendan Frost
Music: Collector – “Lockout Law” & Filmmaker – “Lust Riders”
Interview by: Larry Lanza
Share this with a mate down unda on Facebook
Report this as too well done on Instagram and Twitter