Whenever we hear about a skateboarder crossing over into the art world, we’re a bit wary, and for good reason. There are a ton of skaters out there who have made the jump, but not many of them truly give their art the time, thought, and care to ever “break through” and make a name for themselves as artists.

Brian Anderson isn’t just another one of these fly-by-night skater artists, though, and he’s been silently banging on his craft for years and actually has something to say.

For his first official art show, Brian teamed up with Calder Zwicky—ex-Coordinator of Teen Programming at New York’s MoMA and skateboarding ally—to help present and curate the vision of the show with him.

“Fathers Afloat” explores Brian’s family background and his unique psychedelic-inspired aesthetic, and features artwork from both his father and grandfather—both artists in their own right—alongside his own paintings.

Calder helped get the trio’s artwork showcased in an old public bathroom turned trendy gallery space uptown on 96th & Broadway in Manhattan and invited us to check out the gallery as they prepped for the opening. We held our breath, thinking we might come across some of the NYC public bathroom smells and sights, but instead, it was housing three generations of captivating artwork.

After checking out all the art, we sat down and spoke with Calder to find out some behind-the-scenes info on Brian’s first show.

To start, can you give me a few brief sentences summing up the idea of the show?
I’d say that Fathers Afloat is a show of new paintings by Brian Anderson, shown alongside older works created by his father Edward Anderson (1923-2001) and his grandfather Einar Anderson (1900-1972).

It’s a multigenerational show, and it explores themes of family, childhood, memory, landscapes, landmarks, oceanic travel, and what I would call “psychedelic joy.” 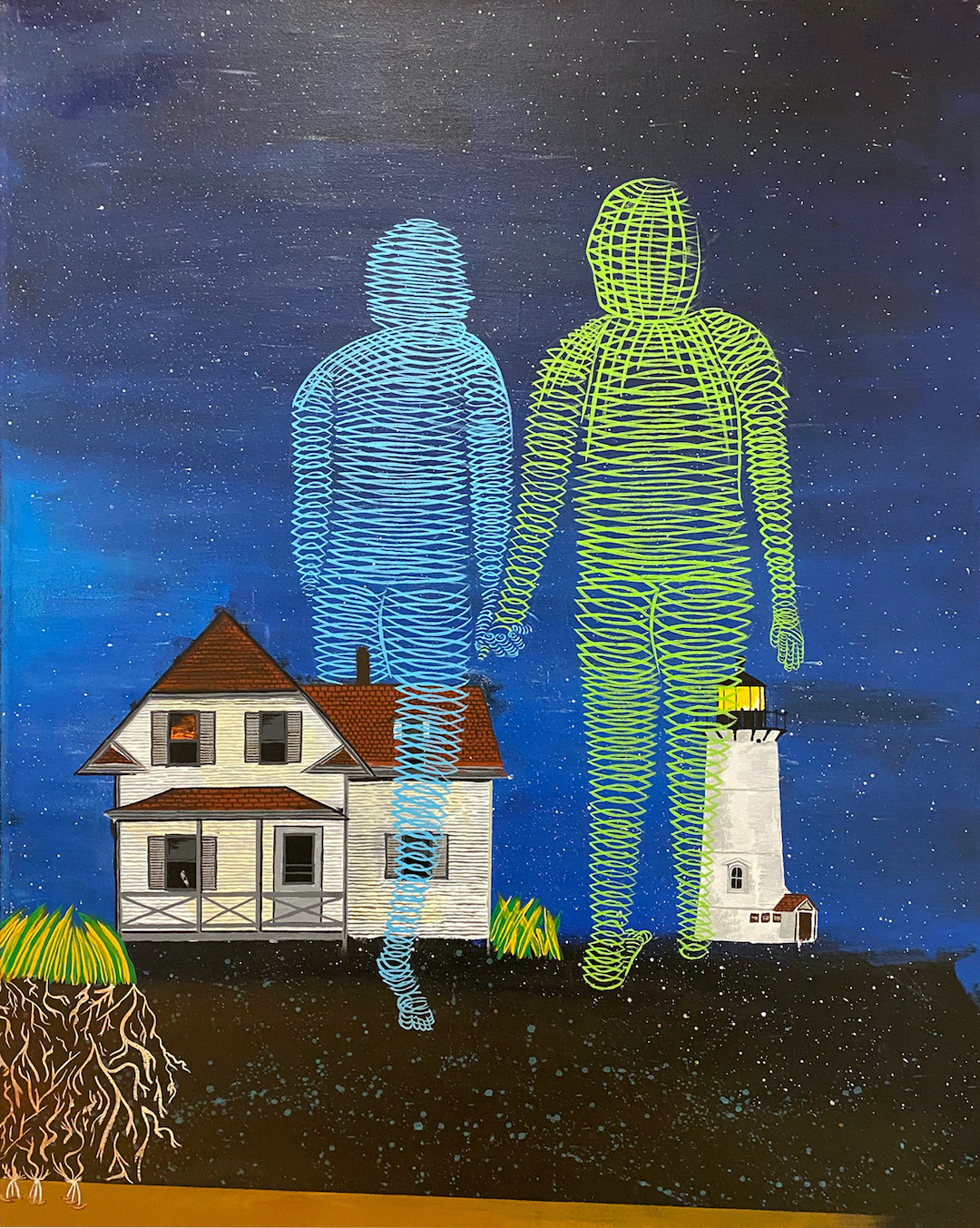 What’s your role on this show? How did you connect with Brian?
I’d describe my role in the show as the “organizer/curator/artist support system.”

Brian and I first started talking about the show about a year and a half ago. I’d already worked with him twice through the LGBTQ drop-in program I ran at MoMA. After looking at his older body of work, mostly just these large-scale paintings he had laying around the house that he was sort of just making for himself—not even really to show anyone—I asked him if he wanted to collaborate on a show of new work. He was psyched.

At the same time, I started trying to identify a place for us to hold the exhibit. After looking around the city, I think we both got excited about the Upper West Side space, which is a converted public restroom that has since been turned into a small community arts space. It’s funky and small and just felt perfect for what we were trying to do.

Brian and I settled on the multi-generational theme after a lot of discussions about what parts of him maybe hadn’t been shared as much with the world at large. Everyone knows the LGBTQ story at this point, which is super super important, and of course, everyone knows how incredible his skateboarding career has been. But him being the youngest of 14 kids, growing up in Connecticut and New England, and finding his dad’s artwork, and then his grandpa’s artwork – that felt like something to explore.

His older brother had recently passed away as well, so there was this feeling of familial loss and nostalgia floating around everything he was exploring also. So I was doing studio visits with him, making sure he felt supported in the new project, helping to maybe guide him a bit towards what we wanted to show, keeping him focused throughout various skate trips he went on or when other things popped up, navigating the lockdown and the pandemic alongside him and the space, and just trying to offer a different perspective or another set of eyes. But he was 100% in control of everything he made, I was just there to support and throw out ideas.

And I just want to be really clear, outside of covering all of my out of pocket expenses for the space and installation and the opening, I am not taking a cent of the sales from this project. I broke even, and Brian is keeping all of the other money made from this. 100%. 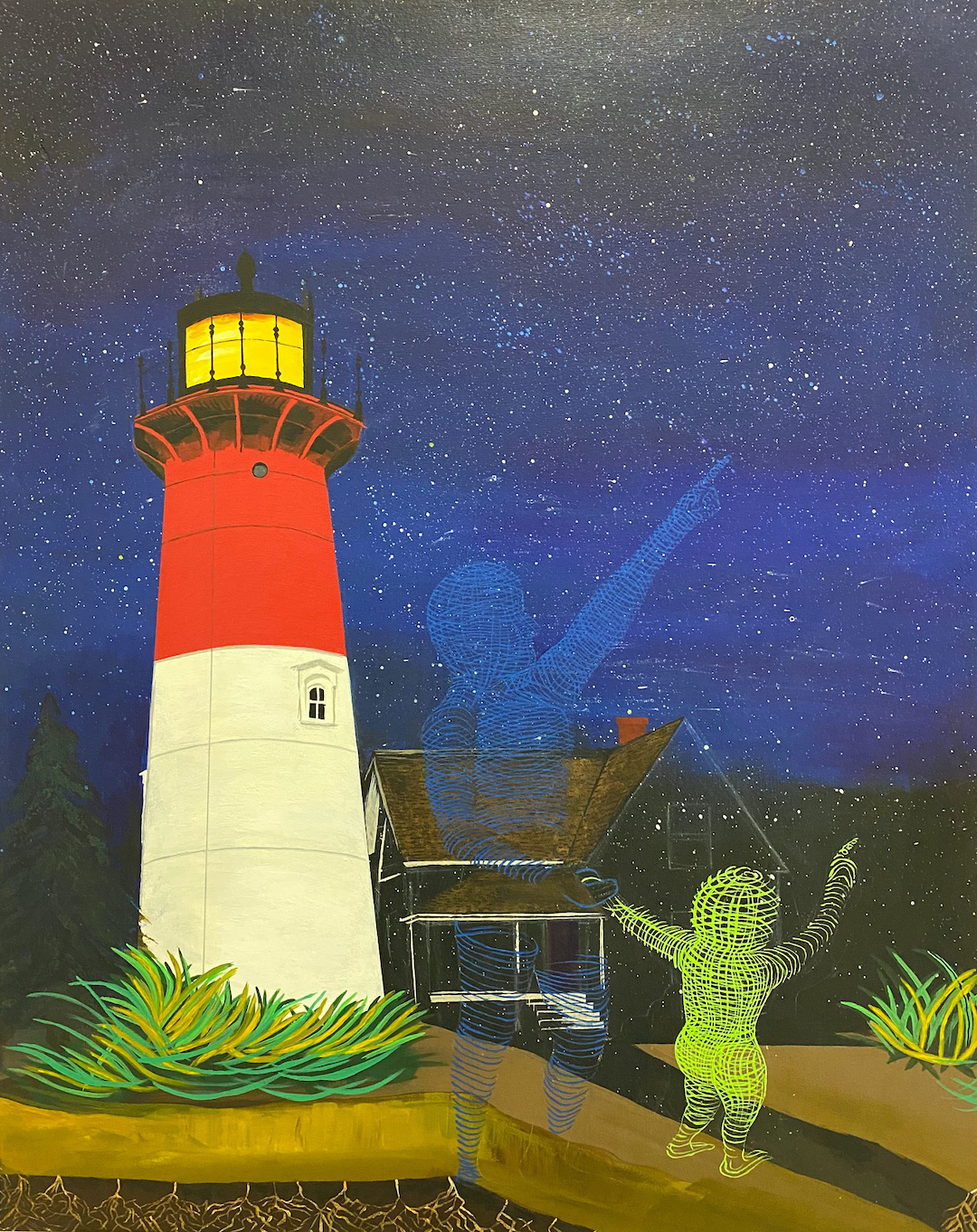 What was the biggest hurdle getting this show together?
The biggest hurdles were getting shut down during the start of the pandemic and then trying to navigate doing a safe, healthy show during COVID once we were able to finally get back into the space.

Originally, the show was set to open in April, so that was the date we were shooting for. In March we got word, like everyone else, that the art space was shutting down and all shows were paused for the foreseeable future. We were both bummed, but neither gave up. I kept in touch with the gallery space, and as museums like MoMA and the Met started to reopen to the public, I began reaching back out to the gallery folks about us getting on the calendar again. They were sort of hesitant, but we eventually came up with an agreement to reopen the space for Brian’s show (it had been closed completely since the pandemic) and to follow all of the CDC guidelines for reentry. We just wanted to make sure that everyone who visited had a safe time when they came and checked out the art. Which I feel like we did.

Did Brian have any insights or personal changes or revelations you witnessed during the process of the art or the show?
I think Brian got to see how powerful his artwork is to the public, and how much people really respond to his vision. I know it raised his confidence in terms of making art, especially because so many people gave him such wonderful feedback on the show. Outside of the skate world or whatever. Just folks who had maybe never even heard of him in that way, coming through to see his paintings—and his dad’s paintings and his grandpa’s painting—and just really loving what he was creating. Getting a chance to share that side of himself with the world. It was super cool.

Also, I know it was meaningful for him to show his dad’s and grandpa’s art to the public. Neither of them had ever done a show while they were alive, so Brian’s first painting show coinciding with their first painting show… it was so special and sweet. 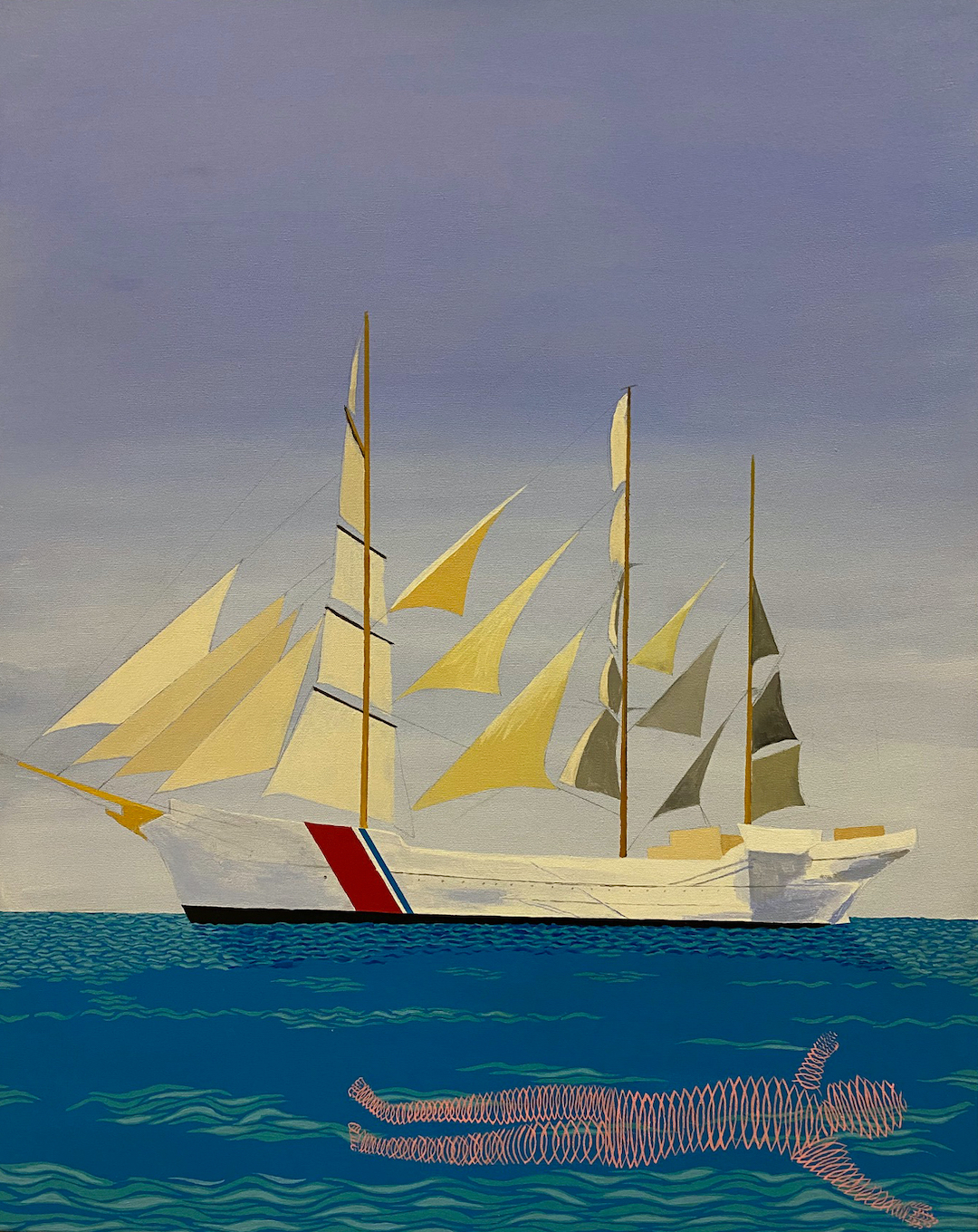 Do you think psychedelics can enhance the creative process?
Absolutely, but I think you also have to be careful not to overly connect the two things. At least not literally. Brian and I are always really careful to make a clear separation between embracing psychedelic experiences, and all of the really beautiful and important mind-expansion elements that go along with them, and the rigors and stability necessitated by the studio process.

Brian really believes in the importance of these expansive experiences–we both do. You can carry them with you in your heart and your mind as you begin exploring the artwork that you want to make. But I think there’s a stereotype that artists just sit in the studio tripping out and making their weird crazy art. I guess some folks can do that, and it’s great if they can, but it doesn’t always work like that. He takes it really seriously, so the psychedelic aspects of this show are all there in the work, for sure. But the work was created in so many different modes of being– thinking about his childhood, his hometown, his husband, his dad. I think he kept those experiences pretty separate when he worked on this project.

As someone who has worked at the MoMA, what’s the hardest part about breaking into the art world as a skater? Is it more or less difficult than someone with no artistic related background?
Being a skater and artist is really a double-edged sword. Obviously, there are some things about being known in that way that can be really helpful when it comes to breaking into the arts. I knew Brian as a skater way before I even heard about any of his creative pursuits. So of course, when it came time to meet with him and hear about what he was trying to do artistically, I was already open to it and sort of primed to be into what he was doing. And you can point to other artists who have paved the way in that regard; Mark Gonzales and Ed Templeton being the two biggest examples, but of course a lot of other folks coming from that world who are also starting to really make great work. Like Jerry Hsu, who put out one of the best photobooks of the last few years, in my opinion.

But the flip-side of that is really tough too. Folks will tend to lump you in with the artwork that these other artists make, just because you both have this shared skateboarding background. And they also tend to not take you as seriously, or allow you to have any deep, for lack of a better word, intellectual pursuits. Brian is super smart when it comes to the work he’s making and is super thoughtful about why he does every single thing you see in each painting. But I think people hear “skate artist” or whatever term and they just think, oh he’s probably just doing this as a lark or something until his next part comes out. That’s totally 100% NOT the case when it comes to Brian. But it’s a fight for sure to get folks to open up to that idea. 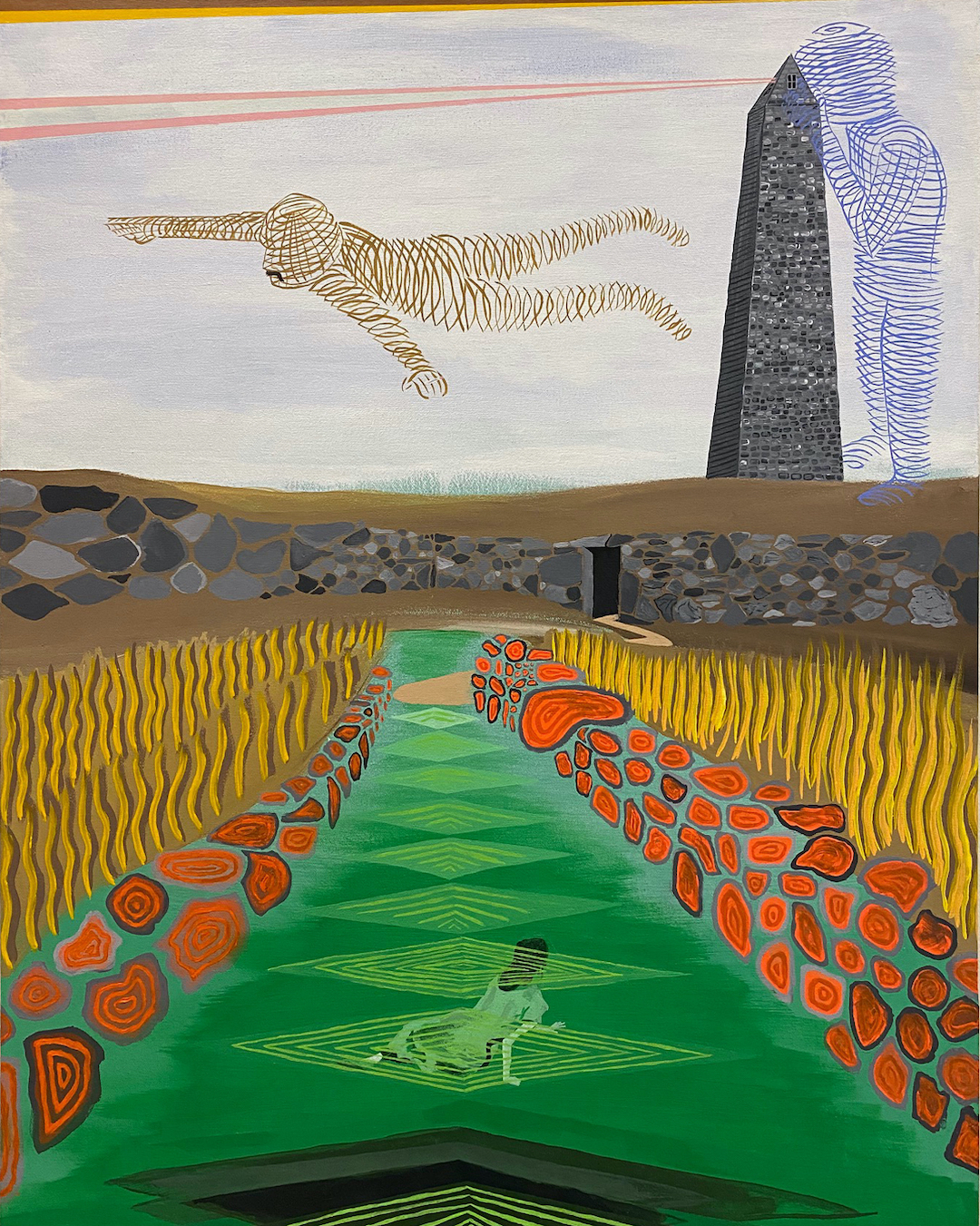 What does this art reveal about Brian in your opinion?
Thinking of the idea of multiple forms of intelligence, everyone who knows anything about Brian knows that he’s a physical genius. His body just works in ways that other people’s bodies don’t. And his brain is connected to his body in this really incredible way. I’ve literally never seen anything like it. He has this deep physical connection with his surroundings, which then leads to this deep emotional connection with his surroundings. He’s like an empathetic genius. So deeply connected with other people, even strangers. So for me, I think this show reveals this deeply humanistic side to him.

I just feel like this show is Brian’s way of sharing the people (his husband Andrew, his brother, his dad, his grandfather) and the places (Maine, Connecticut, NYC) he loves with the world. It just feels like a gentle, loving, psychedelic, sweet, strong art show. And that’s Brian in a nutshell.