A LOOK AT THE TIMELESS PHOTOGRAPHY OF MIKE O’MEALLY

For anyone that followed Australian skateboarding in the ’90s, the little O’Meally credit next to a photo became synonymous with the cool, the avant-garde, and most importantly, the authentic. Mike’s photos captured a candid view of Australian skateboarders at a pivotal moment in our history. It could be argued that the first true and modern representations of Australian cities, the way we saw and interacted with them, were brought to the world through Mike’s lens.

In fields outside of skateboarding, someone with Mike’s CV might be given an honorary doctorate in photojournalism from a prestigious university; or he could be acting as a consultant for a big firm trying to leech off skateboarding’s mass appeal, but he’s not.

Mike’s back here in Australia, although he hasn’t come full circle. That implies he’s back to where he started, which is only true in a physical sense. He’s a husband, father, friend, and thankfully for us, still a photographer. A photographer with an entire globe’s experience in his backpack, and an archive of negatives containing some of skateboarding’s most important historical moments.

Mike is a connector of people, a storyteller, both visually and orally. Whether he’s aware of it or not, he is a conduit of our culture and a keeper of our past.
– James Turvey

Can you tell me about this photo show that you’re holding at the Pass~Port store in Australia?
These photos were all taken between 1992 – 1998 in Sydney, my hometown. But they aren’t your classic, iconic skate shots, they’re more of a batch of “rejects” that didn’t quite make the cut at the time. Also weird light leaks, strips of film that have four or five B+ skate photos in a row, a portrait next to a skate photo on the same sleeve. It’s a real mixed bag of different stuff.

Now that I am older, I found it quite interesting to show them in a way all batched together like some giant junk pile. A lot of photos from when I was first starting out have a certain naive charm to them. They are pretty raw technique-wise, but I can appreciate them today in hindsight.

How have you been archiving the film?
They are all old pieces of film that were scanned and then laid out to make two giant collages. Some are single frames, some are two to three frames. There are also rows of six, which is how the film used to be cut and sleeved by the lab. They were all stored in these brown paper envelopes from the film lab, and for whatever reason, I kept all of them, like hundreds and hundreds of rolls.

Back then, I would cut out the best photo, put it in a slide mount, and send it off to a magazine or company. I never threw away the offcuts and last year while going through an old tub in a storage container I came across them and there seemed to be lots of “uncut gems” if you will, and I thought it might be interesting to do something with it all. This show is the result of that. 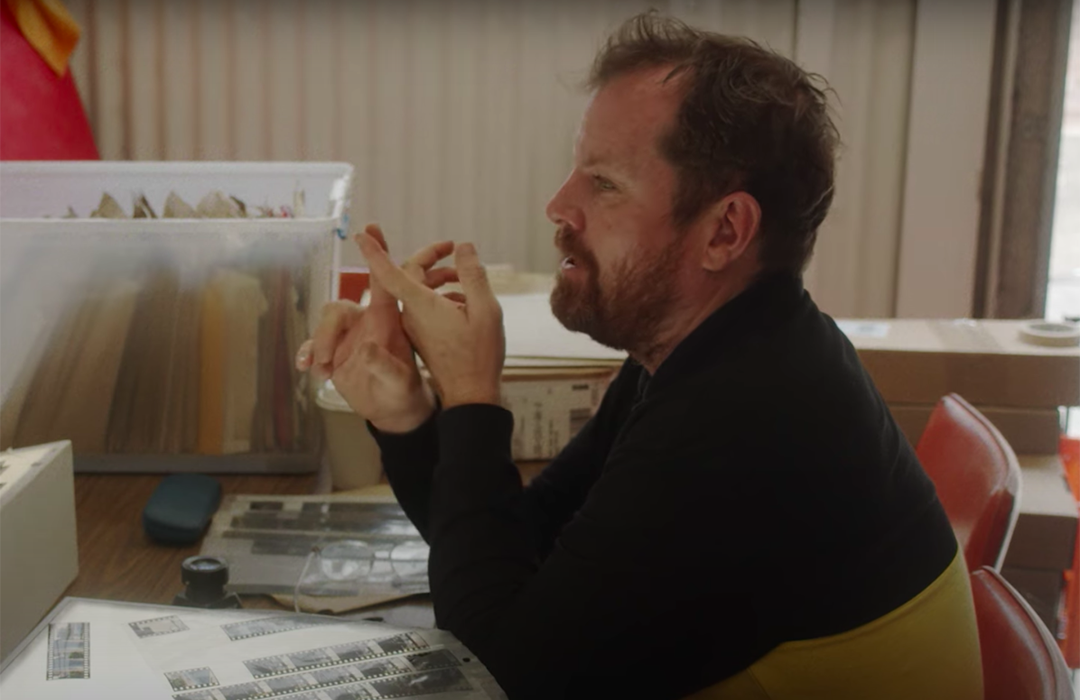 What are the benefits of archiving film photos vs. archiving digital photos?
Well, they both take a lot of work, that’s for sure. And they are both important because if you don’t look after them they disappear forever, as I am sure anyone who has ever had a hard drive crash or lost an original negative will tell you, it really sucks.

With film, you need to look after it physically, keep it free from dust and mold and keep it somewhere safe. But you also need to scan it and add it to a hard drive for a truly failsafe archive. I would say I wish I was a little more diligent with dates and names and labeling in my early years, but all in all, I did okay. It is a real skill in itself to properly archive your work, digital or film. It really needs to be done, and the more care you take, the better position you will be in if you ever want to do anything with it in the future

What are you most excited about in terms of this photo show?
Really just to try and present something in a different way is exciting, it’s not your usual 10-20 classic shots in a nice frame. There are a lot of “imperfect” shots and that’s something I feel good about showing. It’s all part of the process, and also to revisit a lot of old memories and spots that aren’t there anymore. It’s a strange time warp for that reason, but also to remember a time when I was starting and learning and making mistakes. Maybe now that I’m older there is something to re-learn from that, rather than just focusing on the perfect shot all the time. There is still plenty of space for that, I just wanted to try to show these old bits of film in a different way and they have survived all that time hidden away in a box.

I also filled a glass display case with a bunch of knick-knacks and objects and ephemera from that era. Photographic flotsam and jetsam if you will, and that was really fun to put together. The show is also dedicated to Huf [Keith Hufnagel] and Wade Thompson, who recently passed. 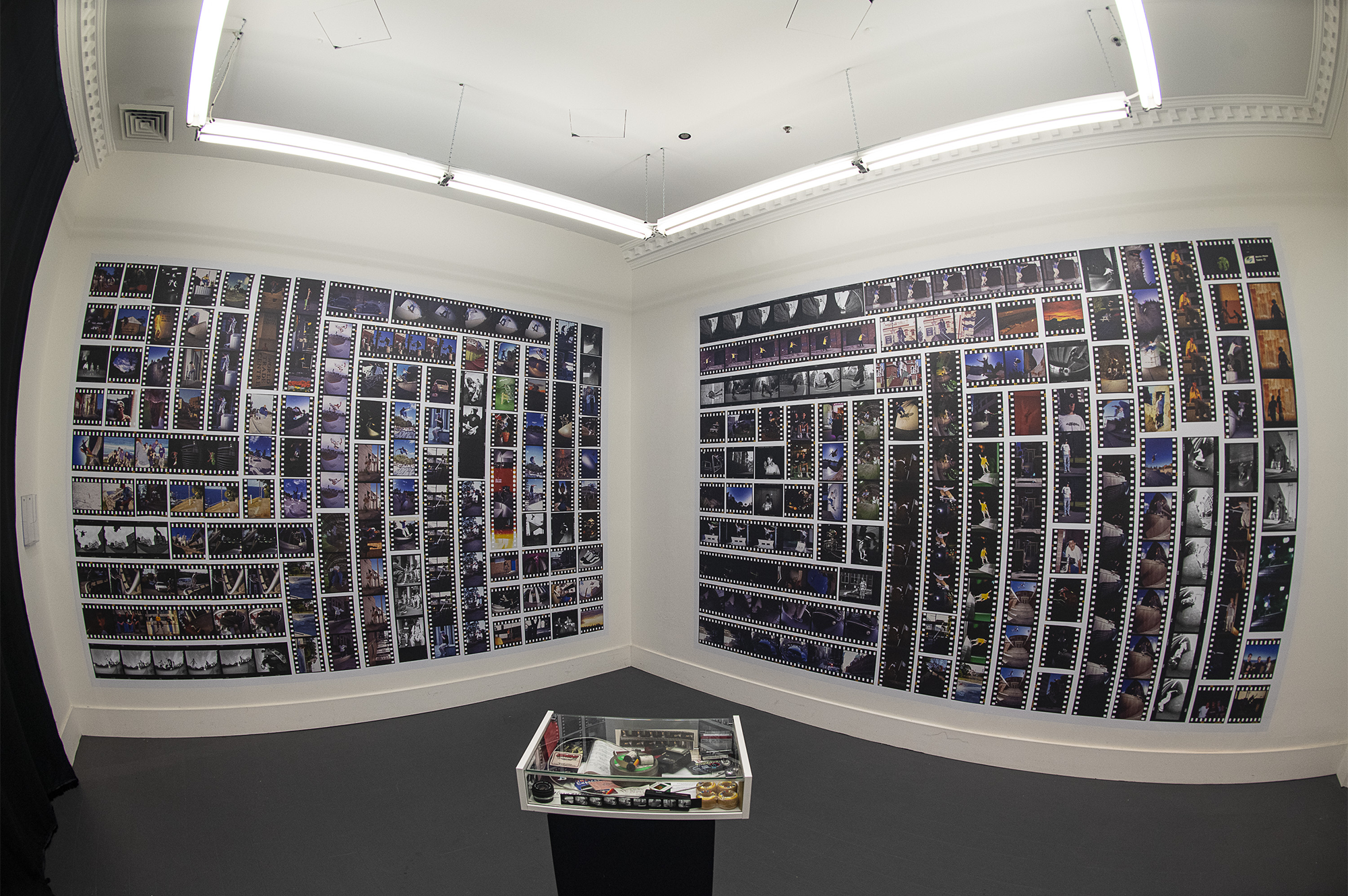 Are there any tricks that you missed or messed up that keep you up at night?
I am sure there have been a few, and I could name them, but probably what’s equally as crushing is when you tried your best and the skater landed an awesome trick, but the photo just didn’t look that special for whatever reason. Some days the magic is not there and that can sometimes make you feel worse than if you totally blew. The lukewarm skate photo… I would rather blow it completely!

I think there are lots of people self-publishing zines, making books, and finding new and old ways to showcase great skate photos, such as boards, T-shirts, prints, exhibitions, and all kinds of stuff. There are actually still outlets to view it besides magazines and Instagram, although those are definitely the two main sources. I am kinda rambling a bit, but I think skate photography is as good if not better than it’s ever been, certainly the standard and quality of it.

What do you think skate photography adds that videos can’t capture in the social media age?
I think they are both important for their own reasons, and maybe comparing them against each other is a mistake to begin with. They both hold value for different reasons. There is something about a great still photo that captures the imagination because it leaves something to the imagination. It shows you enough to grab your attention, but some of the best things in life leave you wanting more. I think skate photography fires our curiosity and imagination in a way that perhaps video does not. Definitely in a different way. 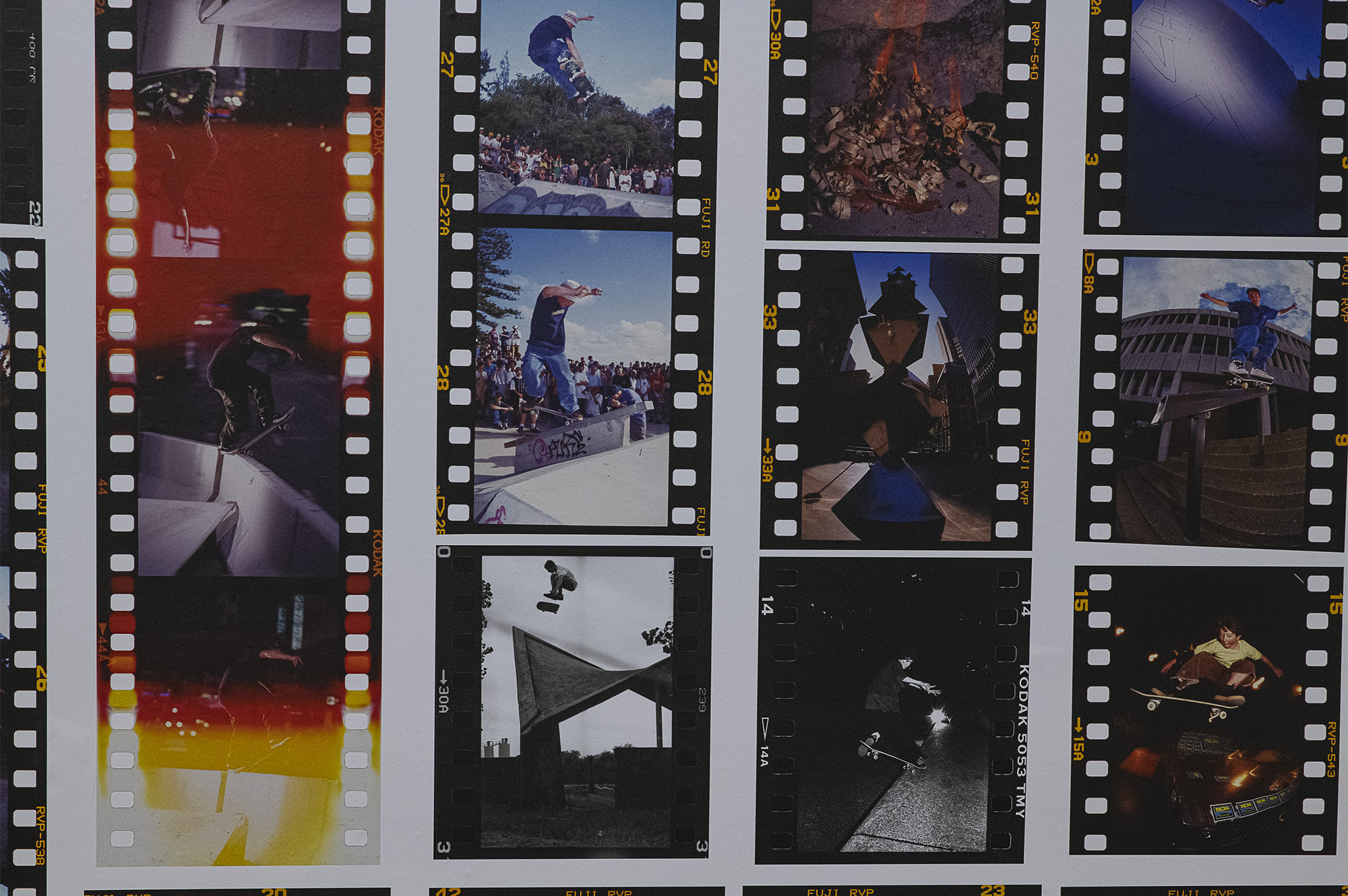 Did you have a mentor when it came to photography?
I was lucky to have a few; Andrew Currie being the first, and from there Lance Dawes was always real cool and encouraging. As were Tobin Yelland and J Grant Brittain. Those guys were very generous with advice or just being in touch with a young skater from Australia trying to figure it out.

Who are some photographers, skate and non-skate, that people should be checking out?
Skatewise, there are so many good skate photographers these days. A couple of them who stand out to me, in no particular order– Sam Muller, Oliver Barton, Ben Colen, Matt Price, Jake Darwen, Alex Papke, Sam Ashley, Alex Pires, and loads of others. Some legendary skate photographers that I will always admire are Lance Dawes, Gabe Morford, Tobin Yelland, Grant Brittain, Spike Jonze, and Daniel Harold Sturt.

The non-Skate photographers I like a lot are of the Magnum era photographers. Also Diane Arbus, Richard Avedon, Boogie, Danny Lyon. Man, there are so many! I tend to like lots of photojournalists, but the list is ever-growing and evolving.

Who were some of your favorite current skaters to shoot with?
These days I like anyone that has a good attitude and a good idea for a spot or a trick and that is willing to try hard to make a great photo. Having said that, a few of my favorites were Wade Burkitt, Currie, Huf, Keenan, Puleo, Pluhowski, Pappalardo, Dill, and AVE. Tom Remillard is always fun to shoot with, Lucien Clarke, Blondey, and Beatrice Domond is a real one. There are so many! 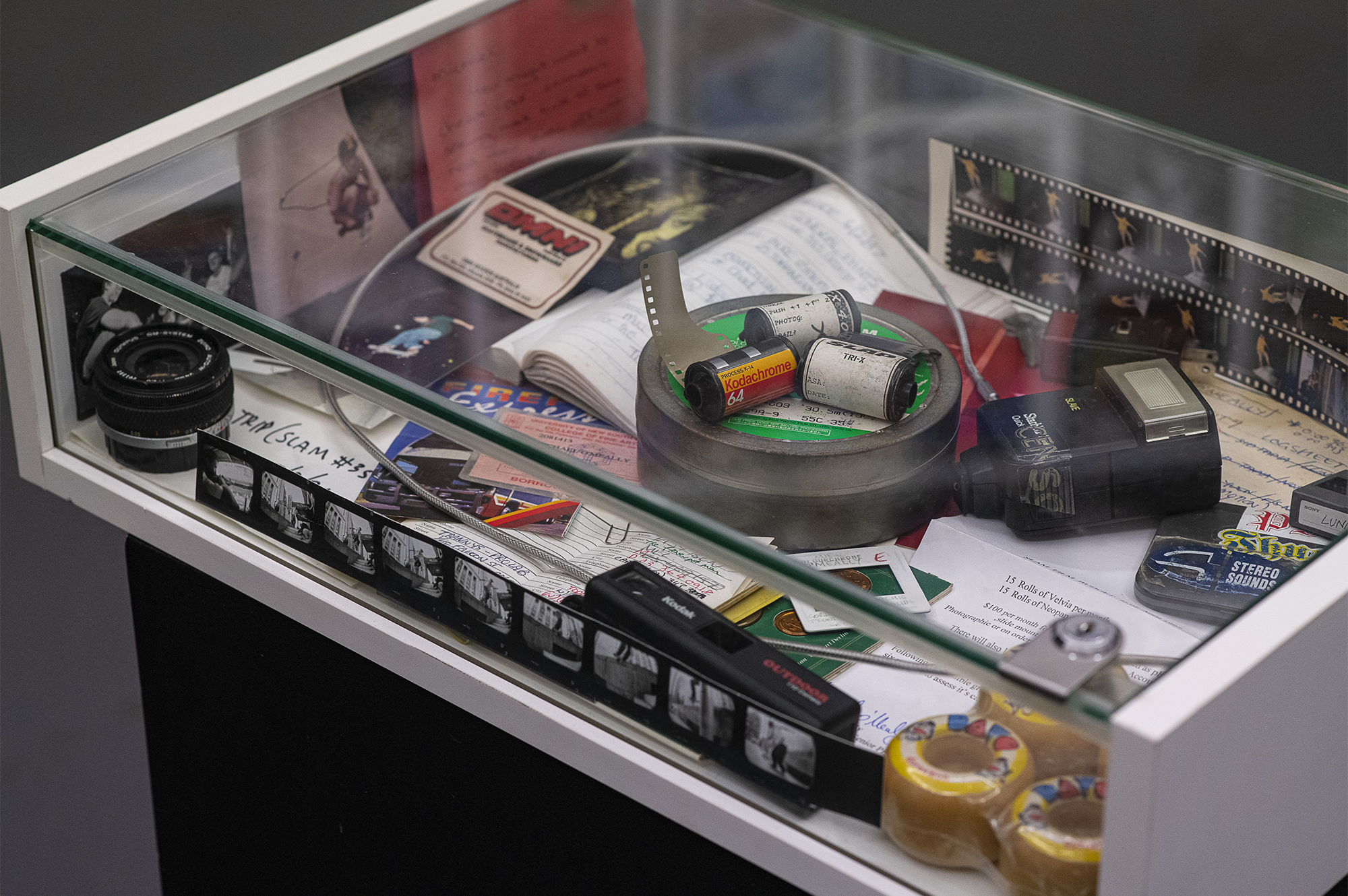 Do you have any good memories from your skating and shooting with Huf, Gino, Kenan, and that crew in New York?
I have so many good memories, but one that stands out is skating around with those guys all day and then going for a Ray’s slice – pretty standard “just moved to NY and tripping now how good the pizza was” type situations. That is just a nice memory and one I will always cherish fondly. There are lots of other memories but that one falls into that primal taste and smell category that I will never forget.

Do you see anything in skating today that can mimic the attitude and rawness of that time period in New York?
Definitely. I think it’s hard to pinpoint directly the influence those guys and that era had over skating, but in terms of power, style, and originality and as you said “rawness,” I think any skater today with a passion for skating and the history of it could see how influential that time period was and how it has weaved its way into the attitude of skating today.

You have so many iconic photos with a ton of captivating people, when are you going to compile it all in a book or something of that sort?
I would like to do that one day! Don’t hold your breath but it may happen eventually.

Video by: Izrayl Brinsdon
Intro by: James Turvey
Go see “Syndney (Un)Scene” now at the Pass~Port store in Sydney
Share this with a voyeur on Facebook
Report this as hoarding on Instagram and Twitter