WHAT HAPPENED TO FREAK OUTS? 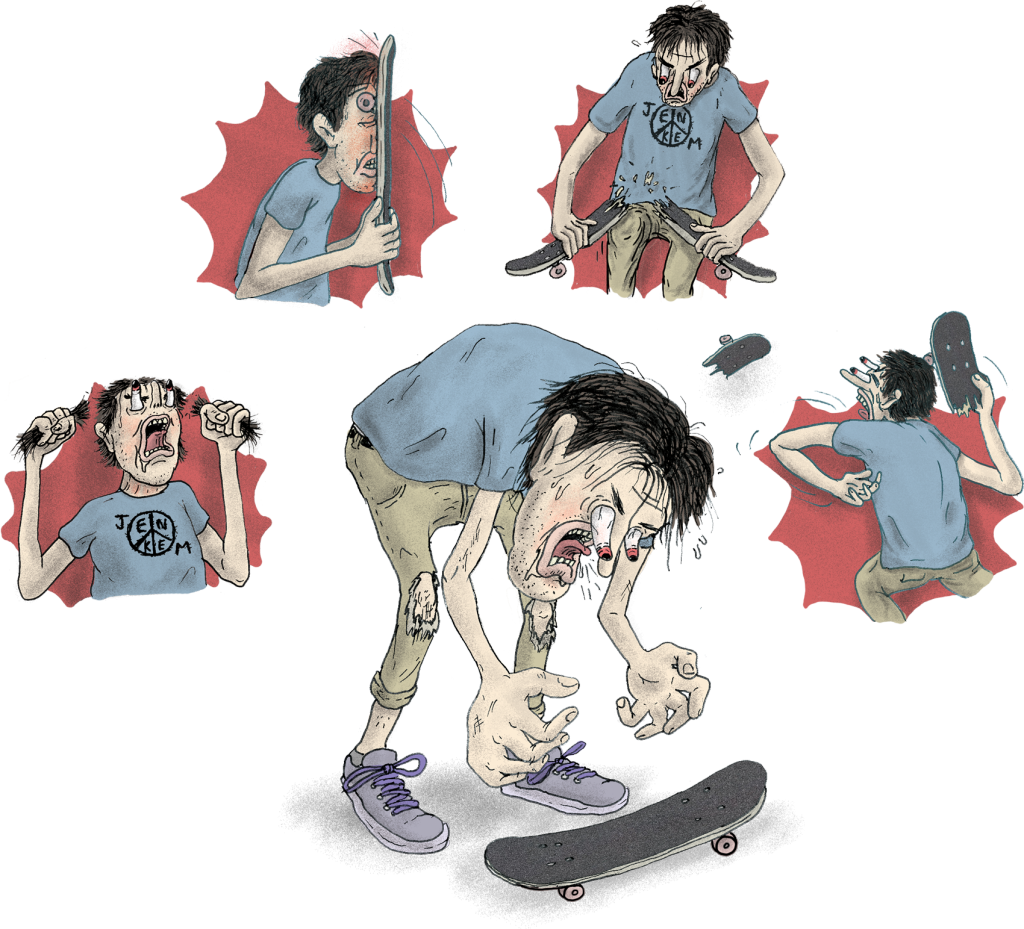 Growing up, one thing I could always count on in a full-length video was a good freak out montage. Those short clips, between video parts, of a skater very publicly losing their shit over not being able to land a trick. Like Anthony Van Engelen in The DC Video, Jason Dill in Skate More, or of course, any clip of Kerry “Hockey Temper” Getz. Well-done skate tricks may be the main attractions, but these unplanned moments are often more interesting.

But skate videos today, both full-lengths and web videos, don’t have nearly as many freak out clips, and even fewer freak out montages. So what happened to this genre of skate footage? Do skaters today not freak out as much, or are editors just not putting them in their videos?

The one skater besides Getz who truly championed freaking out while filming tricks was Heath Kirchart. Hidden on the DVD of Emerica’s This Is Skateboarding is an entire montage of Kirchart, a little bit longer than his actual part, that highlights his angry, neurotic, behind-the-scenes moments of stress. Titled “The Dance of Madness and Despair,” it does more than just show Kirchart freaking out. It represents both his notoriously intense demeanor and powerful skating.

So I called Jon Miner, who worked on filming and editing This Is Skateboarding, to see what he had to say about my beloved freak out montages.

“I think those montages, the good ones, are interesting to watch because you can tell the skater’s really putting their heart into whatever it is they’re trying, and they’re torturing themselves,” Miner told me. “You get to see into that process but also into that skater’s personality.”

Seeing Kirchart scream, throw his board, and pull his hair shaped my understanding of him from an early age, and it played into his reputation within skateboarding as a guy who commands respect through quiet intimidation. 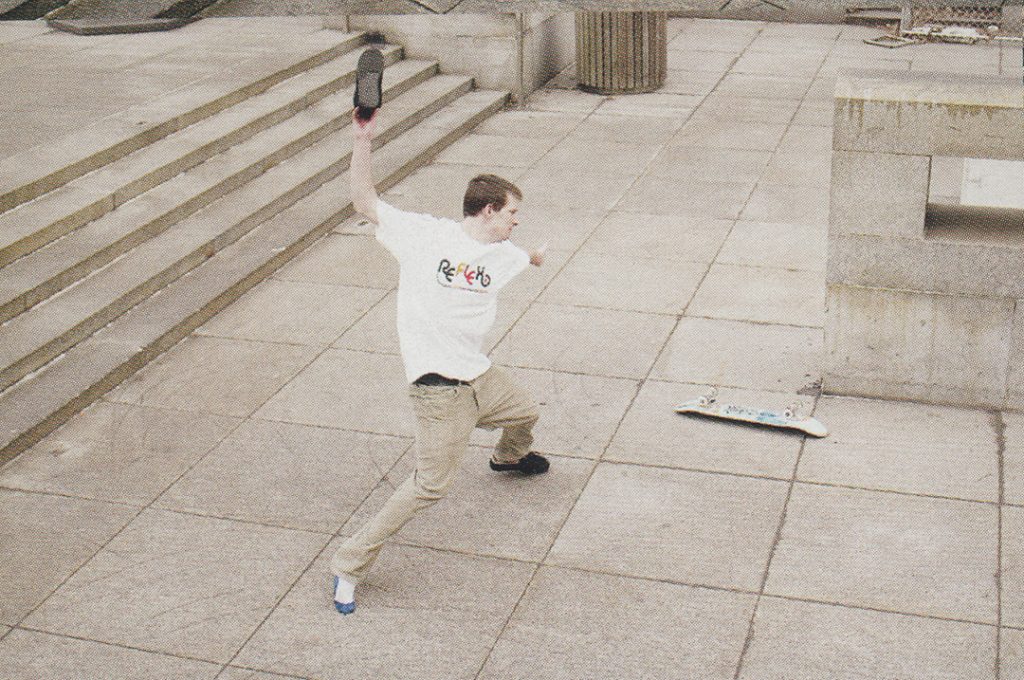 Miner suggested that freak out clips started with skaters first documenting groundbreaking tricks. “As skating progressed and became more, for lack of a better term, about getting hammers, I think that’s when it became more of a thing,” he said. “There’s little glimpses of Mike Carroll freaking out at Embarcadero back in the day. It comes from the skaters that are really pushing themselves.”

Before today’s bounty of online video interviews and lifestyle content, the most visible and prevalent windows into skateboarders’ personalities were the freak outs, slams, and sparse b-roll clips in their video parts. That footage mattered more back then, and it could do a lot to shape or misshape perception of someone.

When Miner first saw one of Kerry Getz’ parts, he understood Getz’ anger negatively. “It had a lot to do with the way they edited his footage and the way he was portrayed. Like almost borderline, this dude looks like kind of a dick. Then if you meet him he’s the nicest dude ever.”

When I asked Miner why he thought freak out clips were less prevalent today, he had a couple ideas but wasn’t entirely sure what caused the change. 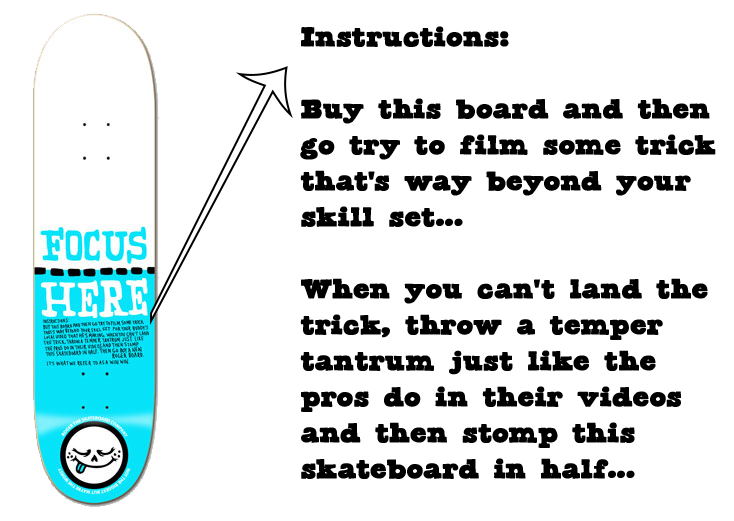 Firstly, he debunked my idea that skaters coming up today simply don’t freak out as much as previous generations. “At least with the crew I’ve been filming lately, these guys have been fucking losing their minds,” Miner said. Mason Silva, who Miner’s been filming for Element skateboard’s upcoming Peace, had been described on this season’s King of the Road as having quite the skate temper.

I’d never seen much freak out footage from Silva, but when I asked Silva about it he confirmed he has a tendency to do that while filming, and added, “I know every skater freaks out whether they want to say it or not.”

Miner also reminded me that most freak out clips now end up in b-sides or “rough” and “raw cuts,” which are meant to tell the stories of skaters’ battles with tricks. “You don’t want to make a skate video too long,” he said. “In order to go in depth, it’s gonna take time, so that was the idea behind the b-sides.” Freak out clips aren’t entirely gone from full-lengths and web edits, especially for ender tricks, but they’re no longer the norm.

“I know every skater freaks out whether they want to say it or not.”

Personally, I don’t think all freak out footage should be confined to b-sides. Seeing Clive Dixon punch a bench in agony would have been more entertaining if it popped up unexpectedly in his video part, rather than in a “rough cut” where I’m already anticipating freak outs and slams. And Alex Olson’s Fully Flared part would not have endeared me to him if it didn’t open with a montage of spazzy freak outs.

Miner thought this trend of cutting clips down could be part of a larger shift in the very nature of video parts: to make them “more about showing this athlete and his amazing abilities rather than this interesting character and their personality, as well as their skating.”

Alternatively, one difficult to prove theory for the downplay of freak out footage may be a general lack of fierce on-board personalities in the upper ranks of skating.

Many of the skateboarders breaking new ground today — Shane O’Neill, Jamie Foy, Tiago Lemos — seem to get most of their tricks so easily, while earlier pioneers — Heath Kirchart, Geoff Rowley, Mike Carroll — were known to battle more regularly. Seeing the younger pioneers suddenly freak out could be off-putting.

“You only want to see freak out footage if it’s entertaining or shining a light on who that skater is and giving a better understanding of their personality,” Miner said. “If you’re watching a skater really struggling to land a trick, that’s where it can be compelling. But if you see somebody who is so naturally gifted and they’re just like, ‘Eh, I can’t land my trick,’ it’s like, ‘Fuck this dude.’”

When Lemos or O’Neill miss a trick they tend to laugh it off, which feels more appropriate than imagining them shouting “Fuck!” and throwing their board around.

Without the right kind of skater, freak out footage can easily make a skater look wack or, worse, annoying. That’s why Silva doesn’t like seeing himself freak out. “It’s embarrassing for me because my personality is not aggressive,” he said. “But when I watch that I’m like, ‘This kid sucks if I didn’t know him.’”

I also floated the idea that younger skaters who grew up managing their public personas on Instagram might be more cautious about letting footage of their freak outs be seen.

Since I’d barely seen any footage of Silva freaking out, I asked him if he ever asked filmers to omit those clips from his video parts. He said he didn’t explicitly ask them because there was a mutual understanding to not include that stuff. “I think they just know it’s not a thing they should do,” he said. “It’s not representative of me and it’s not necessary in a video. It makes you look like a brat and I don’t think that should be included in any video now.”

Miner thought this understanding between skaters and filmers might be part of a larger trend of freak out clips simply being less cool. So he asked, “Maybe working hard to achieve something isn’t cool right now? That sounds so ridiculous, but [there’s] a certain amount of being like, ‘I don’t want to go out and kill myself, I just want to look cool.’”

It’s hard to talk about these kinds of skaters without sounding bitter or out of touch, but I think we can all identify them. Maybe they have a sexy trick they do repeatedly but not with the goal of taking it to bigger and sketchier obstacles. Or maybe they stand out in their eagerness to try impressively dorky tricks, instead of impressively difficult tricks that would seem more worth freaking out over.

So where does that leave freak outs?

They’re not gone, but they’ve fallen out of favor with younger skateboarders who have plenty of better ways of showcasing their personalities, and some of whose styles might be undercut by these rougher moments. And as skateboarding’s audience continues to grow bigger and more available to outsiders, maybe we’ve decided to not broadcast our bad sides to the world.

Freak outs are appealing because they’re private moments, and when the audience for those moments becomes, in Silva’s case, the size of a national TV channel, the skateboarders involved rightfully want to be more selective about sharing them. If you’re caught freaking out in a “rough cut,” you know it’s only going to be seen by other skateboarders who will be able to appreciate what they’re watching. Non-skateboarders watching someone freak out over a trick could easily understand it to be a kind of disgraceful reality TV moment, rather than a glimpse at something more complicated.

But does that mean it’s impossible for non-skateboarders to appreciate a b-sides freak out?

Let’s take a look at a somewhat recent solo part, Austyn Gillette’s “Radiant Cure.” In the finalized version, Gillette does a back tail heelflip out that flies by without much consideration. But the rough “Radiant Cure” stops to show Gillette battle that trick over several days, so when he finally lands it, it feels more (although not exactly) on par with Dylan Rieder’s epic front tail kickflip out on that same spot.

Watching Gillette alternatively fling his board into the street and smirk at the camera makes me feel like I know what it would be like on a session with him. Going this deep on one trick is pretty fucking intimate, and I think it does a better job at explaining to any audience all the energy and emotions that go into a freak out than an even longer compilation of Kirchart freaking out over the course of dozens of tricks.

Single trick freak out sagas like Gillette’s or Silva’s do a good job of telling skateboarding stories, and those, or other freak out footage, shouldn’t be exclusively tucked away in b-sides. Reality TV shows, which have their own agenda, aren’t necessarily the best format to share freak outs with the general public. But bringing them back into skate videos to a certain extent can help give some pause to the feed of skate content passing through us more quickly each day.