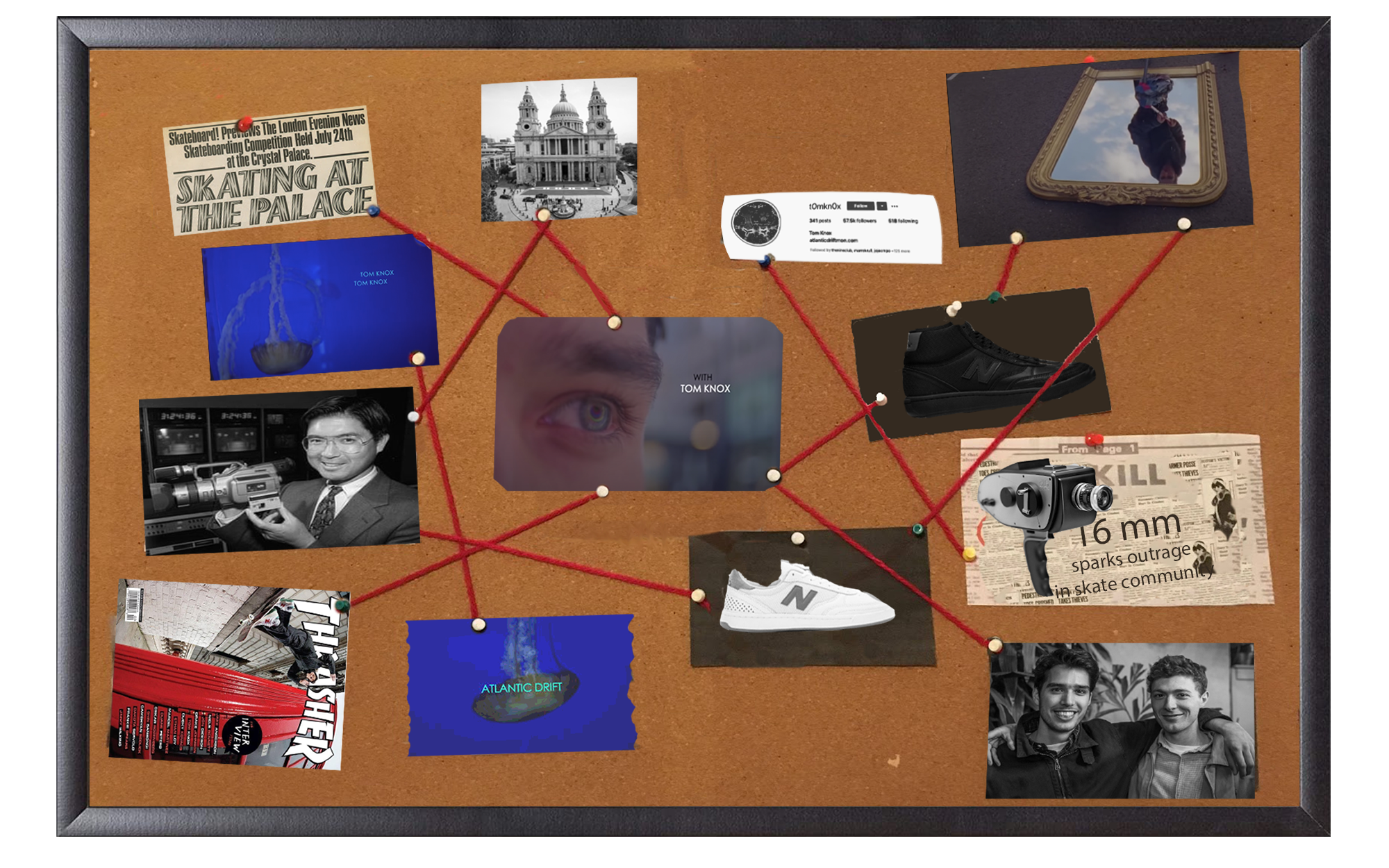 You’d be forgiven for overlooking the intricacies in Tom Knox’s Atlantic Drift part during your initial viewing, as ten minutes of skating alone is a lot to take in.

But now that the initial shock is gone and you’ve started rewatching the part, you’ve likely noticed Jacob Harris’s masterful editing at work.

Beyond seven trick lines across the crustiest spots in London, the part is peppered with hidden details and thoughtful tributes that invite the viewer to think of the work as something beyond a traditional video part, to compare and contrast the part to the pair’s previous work, and to consider the relationship between filmers and skateboarders, skateboarders and spots, filmmaking techniques and time, teammates, and more.

We gathered as many easter eggs from the part as we could and reached out to Harris, who confirmed that not only was everything we found accurate, but there were just as many hidden details he preferred to, “keep behind the curtain” and let viewers discover for themselves.

Here are a few of our favorite moments to get you started on your hunt.

THE INTROS OF ATLANTIC DRIFT

Jacob Harris debuted the Atlantic Drift series on January 3rd, 2017, or “Day 1,” according to the blinking register display captured in his first episode. On November 13th, 2020, or “Day 1410,” he shared Tom Knox’s magnum opus with the world.

Harris relies on music selection to help build out Atlantic Drift’s ethereal atmosphere. In the first episode, he used a song by Fight Bite, a little-known Texas vaporwave group, called “Charlotte Iris.” The track is airy and spacy, yet heavy and ultimately downtrodden. For the first song in Knox’s new part, he used “Charlotte Pluie,” a song off the same album with similar lyrics and structure, though slightly more upbeat.

Each episode of Atlantic Drift starts with shots of jellyfish as an otherworldly theme song plays before transitioning to a close-up of Knox, standing in front of a neon light display in downtown London. This time, however, Knox is the one looking at the light display, the multicolored lights reflected in his pupil.

GETTING THE MOST OUT OF SPOTS

Tom Knox and Jacob Harris drew inspiration from their past decade of work and made a point to revisit some obscure spots to refilm comparable tricks.

Knox’s Eleventh Hour part is full of marathon lines, including one at a well-skated three up, seven down spot in London where he does tricks up and down the stairs before going around a corner and skating a third set of stairs most viewers hadn’t seen before. In his Atlantic Drift part, he follows the same pathway again, though he starts his line by grinding the top stair and gapping out to the sidewalk (reminiscent of his 5-0 to gap in the first episode of Atlantic Drift).

One of the craziest spots Knox skates – a rough, concrete ledge above a bumpy slate bank leading to a four foot drop – is one he’s revisited multiple times over the years. Knox first frontside tailslid the spot in Vase, and filmed increasingly difficult tricks on it in the years since: including a frontside 5-0 in his New Balance part and a terrifying switch backside 50-50 in his Atlantic Drift part. As far as we can tell, he’s the only person to have filmed something here.

Finally, keep an eye out for the St. Paul’s clip as well, the spot having appeared in all of Knox’s parts but one.

Tom Knox might be the star of Atlantic Drift, but Mike Arnold became an overnight sensation after pole jamming and switch backside 360ing his way into all our hearts.

In Mike Arnold’s “Lloyds” part, filmed entirely at Bristol’s Lloyds Amphitheatre, Arnold filmed an ollie over a flat gap, a backside big spin on flat, and a switch ollie over another flat gap, all without pushing or moving his feet to set up.

If these tricks sound familiar, it’s because Knox paid homage to his teammate by refilming the line at back-to-back street gaps in London, capping the line with a switch big spin on flat.

Note who’s in the background cheering as Knox rolls away.

If that wasn’t enough to drive the point home, Knox reenacted the 16mm shot of Arnold hunched over, leaving a train vestibule from the first episode of Atlantic Drift.

THE MEANING OF THE MOP

At this point, the opening shot of Tom Knox’s Vase part – in which he mops the street in front of his Peckham apartment as carnival music plays – is nothing short of iconic. According to a 2016 interview with Knox, the footage was shot on a whim and he had no idea it would actually be used in the final product.

Jacob Harris took the concept and ran with it, and the mop ends up becoming a major thematic element in their work together, popping up during some of Knox’s major life moments.

Beyond mopping the street before his pro debut part, Knox mops the Hawaiian sand during his stag party in 2018, and he mops a mirror midway through his most intensive video part to date (as the carnival music plays again, to boot).

NINA SIMONE’S “I Shall Be Free”

The final clip in Knox’s Atlantic Drift part harkens back to his ender in his 2013 breakout part in Eleventh Hour.

In Eleventh Hour, Knox ollies the first two sets of the ICA stairs, powerslides, and smith grinds the wall rail along the final set of stairs.

In Atlantic Drift, he returns to the spot once again to ollie the first two sets of stairs and big spin the third set.

What’s more, both enders are followed up with a final shot of Knox standing in front of the tower at the spot, the Atlantic Drift one a recreation (albeit cropped a little closer) of the Eleventh Hour shot.

Although Jacob Harris was tight-lipped about easter eggs we didn’t find ourselves, he was happy to explain the Ben Raemers tribute.

“Tom does a line in a place called Grosvenor Square, in a mint-green t-shirt, that ends with a switch 360 flip down some stairs. Tom and I had been filming that line and everybody that was there on the session — Casper Brooker, Mike Arnold, Kyron Davis, Vaughan Baker, and Karsten Kleppan — had already found out Ben Raemers had died but didn’t tell us because they wanted us to carry on.

Tom rolling away from that switch tre at the end of that line is the last few seconds before we found out our friend was dead and neither of us can really watch it without tearing up.

We went back on the anniversary of Ben’s death and filmed the second clip there, where he switch varial heels the stairs, because we didn’t really know what else to do to mark the occasion, and I ended six months of sobriety that day. That’s why we have a photo of Ben blowing across the ground at that spot in particular.”