WHAT YOU MISSED AT THE JENKEM VOL. 2 PRERELEASE PARTY

To celebrate pushing Jenkem Vol. 2 out our mental birth canals, we threw a party with nude figure drawing, sketchy homemade nutcrackers, and custom printed matchboxes, toilet paper, and, to keep everyone safe, condoms.

Vol. 2 is our second book made with our boys at Converse, and compared to the the first, this one’s bigger (meaning 300+ pages of shit), bolder (meaning more gags), and betterer (meaning ALL 100% never before seen content). We know it’s a little crazy for a website to be printing anything, but some things are worth savoring in your hands, and we only printed so many so get that preorder in while you can.

Thank you to Cons for helping us make our dreams come true, Old Blue Last & Punch and Pie for keeping the crowd buzzed, and to everyone who came through, even if it was just to grab a drink and space out on your phone. It means a lot to see so many Jenkem alumni and friends, and even more that they approve of us ripping on them in the photo captions. Thanks! 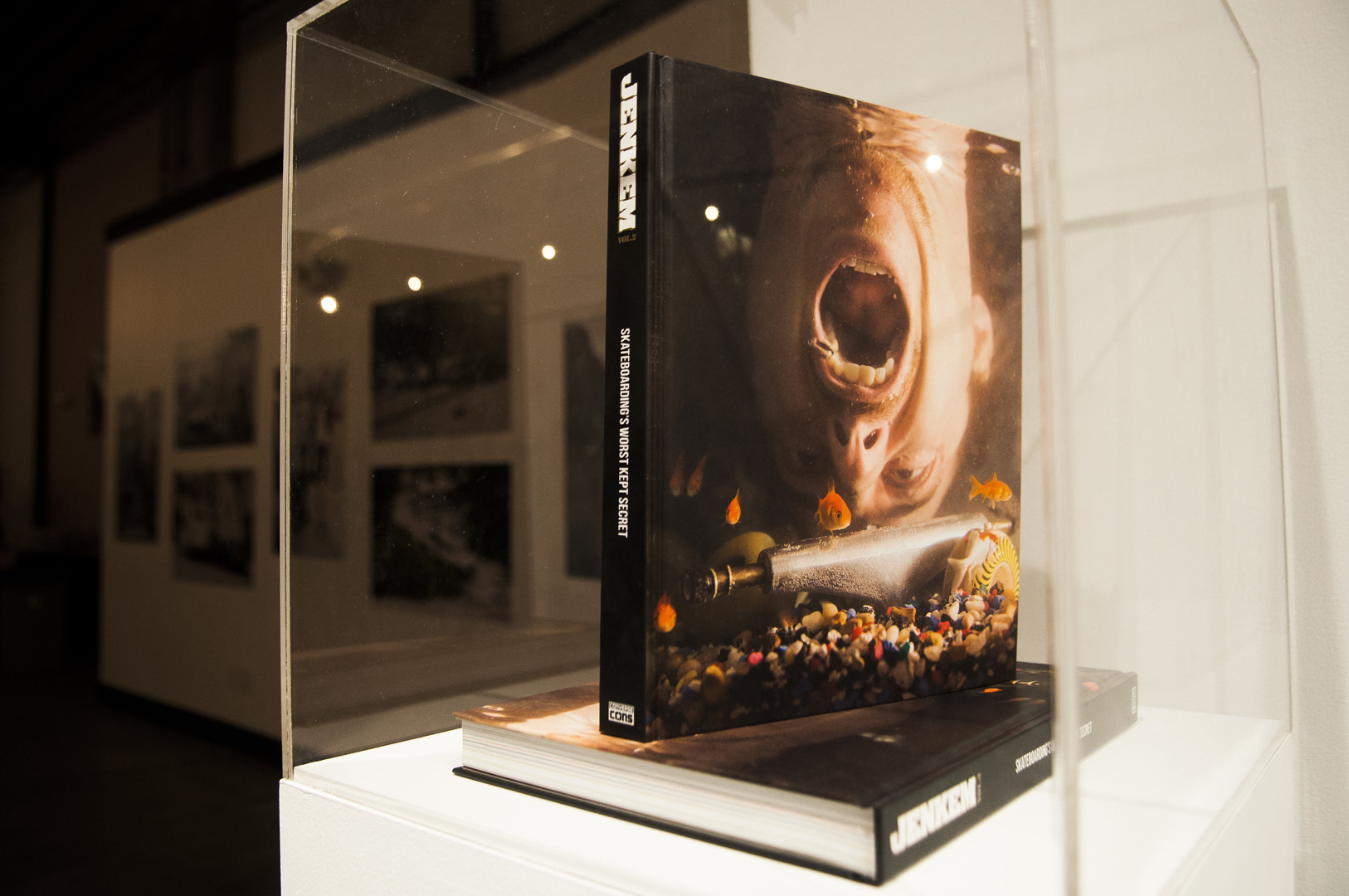 Jenkem Vol. 2 in the flesh. Considering we skipped on the idea of photographing someone pooping into a birdbath, this image is one of our tamer cover ideas. It also makes it a little more palatable as a coffee table or bathroom reading rack book. The museum-like cases here were not meant to suggest the book is some kind of high brow masterpiece, but really just to dissuade people from stealing the book (which they did anyways). Cheers! 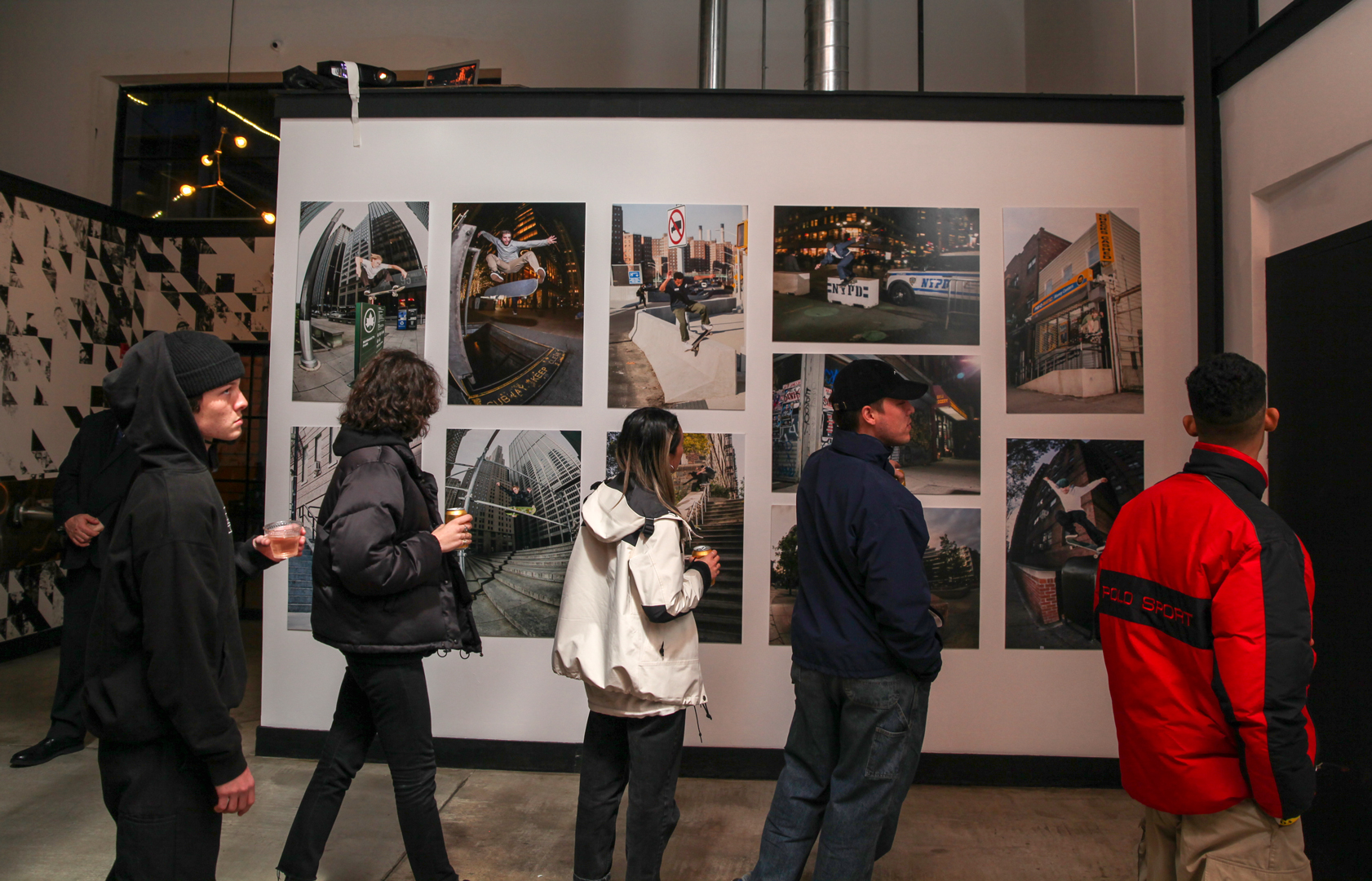 Sneak peek at a photo feature in the book by Mac Shafer. These flicks all have the perfect blend of simplicity and good timing that make for a great skate photo, the kind you could stare at for hours, pretending to look like a real photography connoisseur even though you’re just nervous and drunk and don’t know how to talk to strangers at a party. It’s cool, introverts, we got your back. 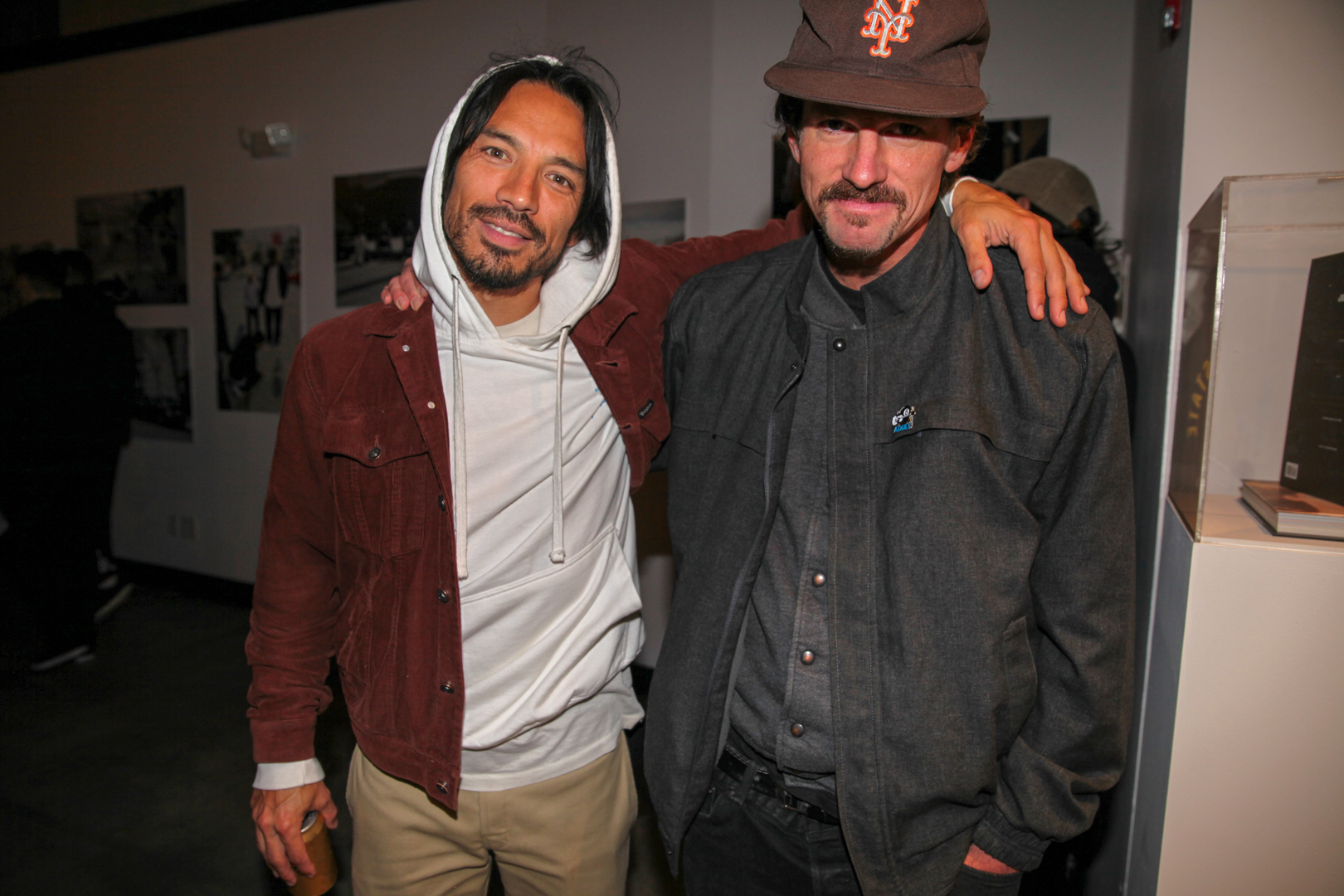 I always associated Kenny Anderson with the kind of skaters who wore brown chinos, but I don’t think I’ve ever seen Kenny skate in those threads. With his vegetable oil car and zen mindset, he was mentally part of the Brown Chino Crew, but he didn’t fully embrace his inner brownness until copping this corduroy jacket. Read all about him in his full-length interview in Vol. 2. 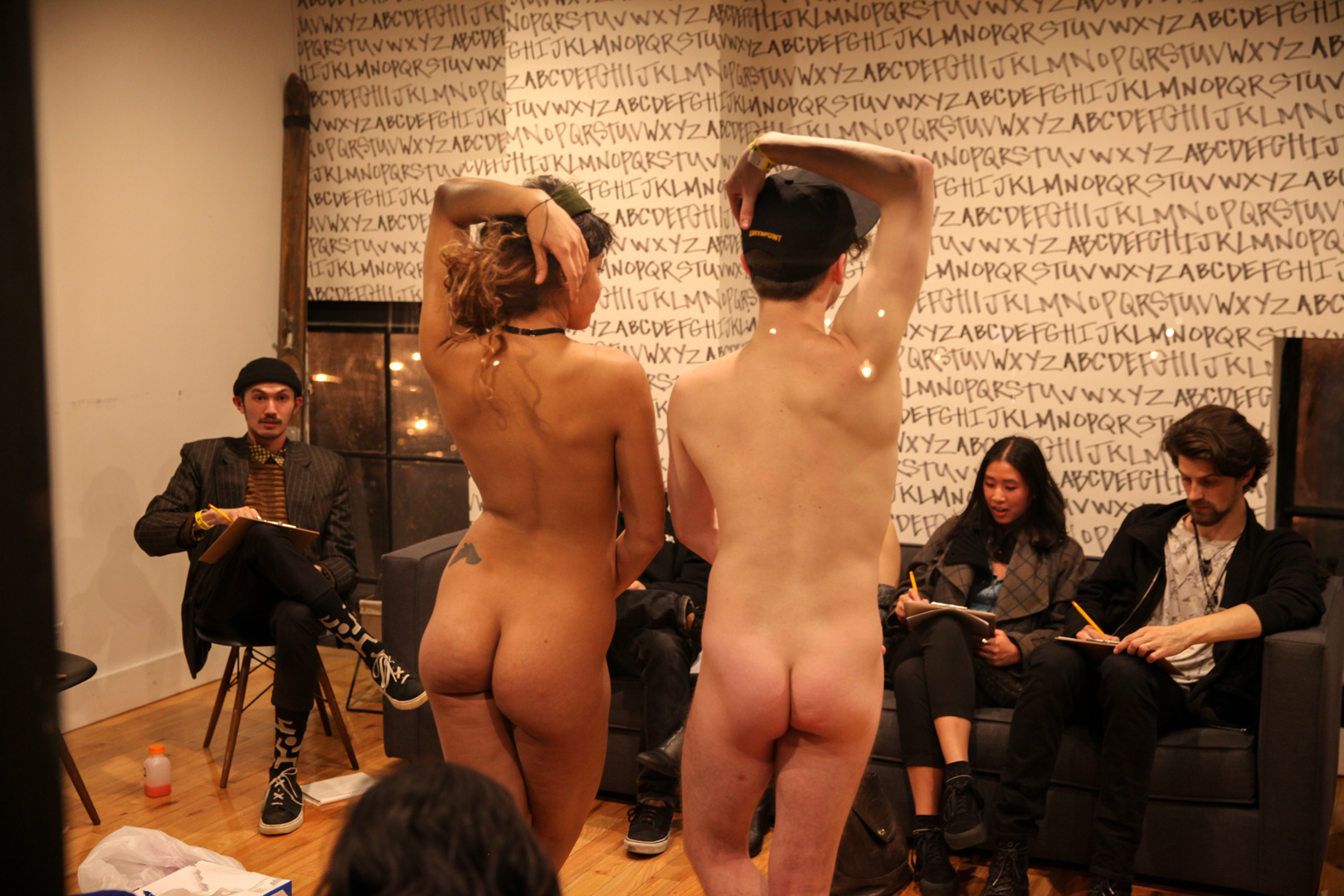 Because we’re both romantic and classy, we got some folks to stand around butt nekkid while drunk people sketched them/silently compared their own nude bods. Surprising how many “artists” came to the party and how dedicated they all were to getting all the details! Big thanks to the nude models for doing the “wide angle” poses too! 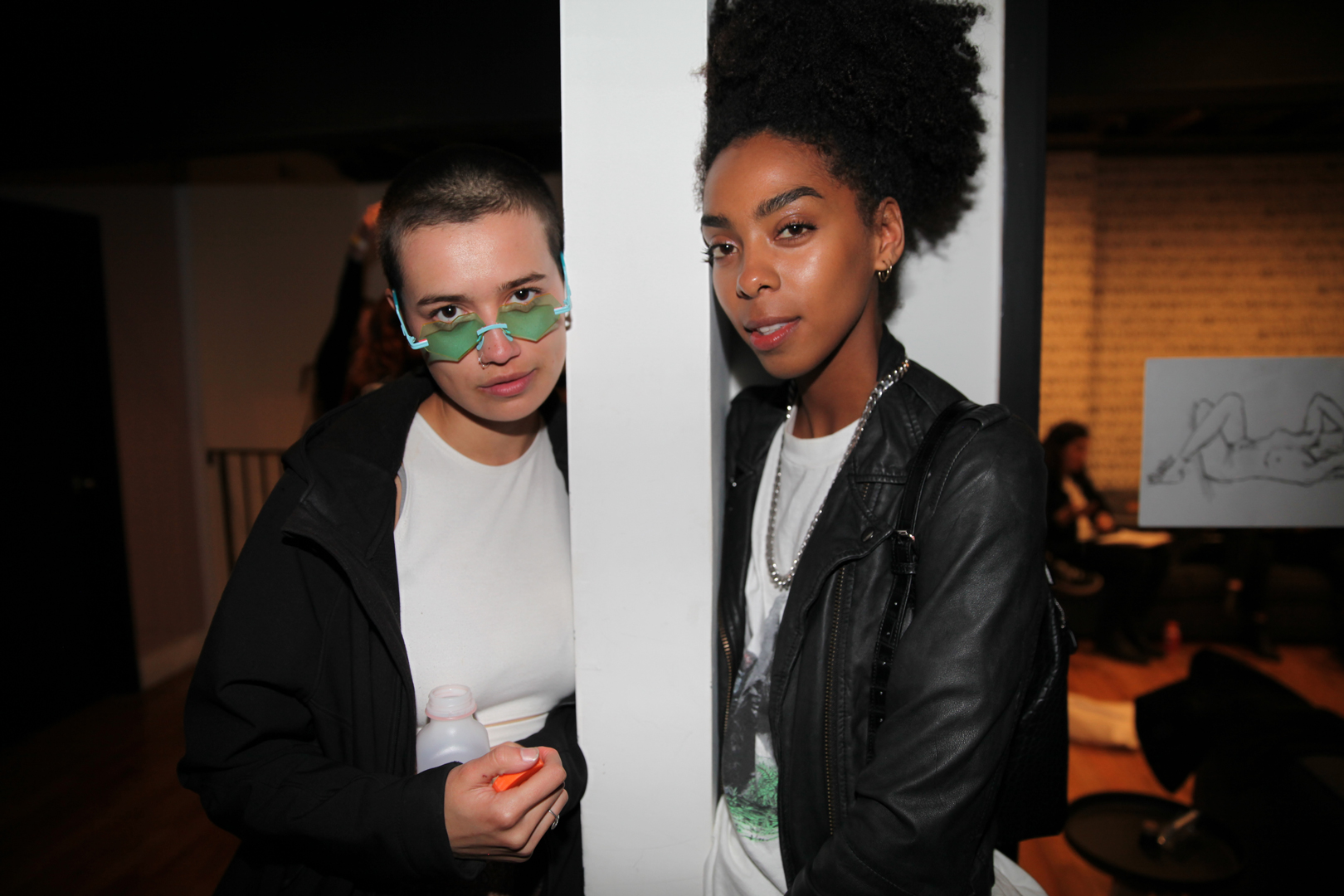 Local skaters from the Skate Kitchen crew Danielle and Briana checked out the nude model drawing upstairs. I don’t know if Danielle’s green glasses made the party better or just feel like she was in The Matrix, but they were a nice touch of weirdness. 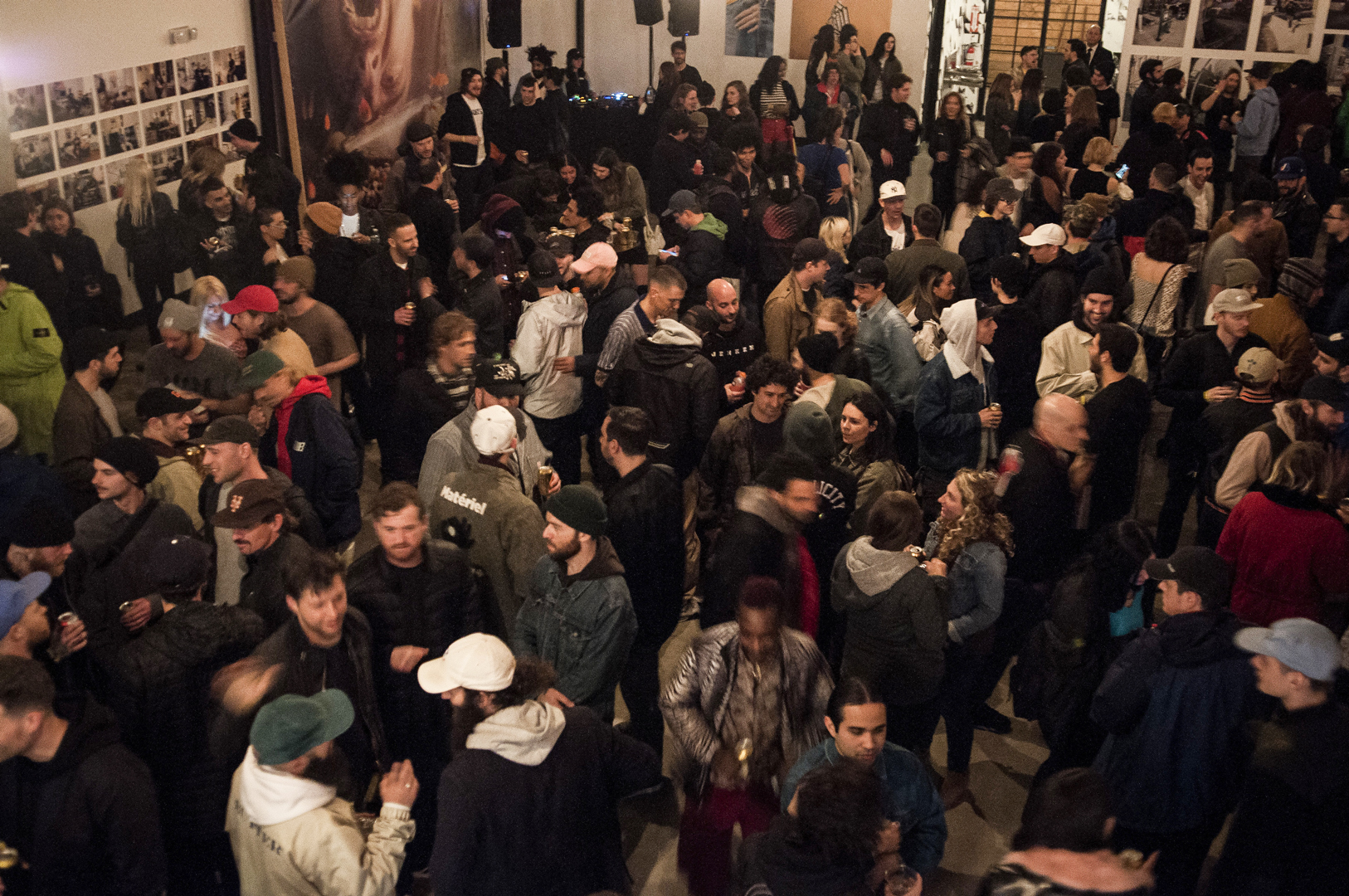 Instead of blowing out the party via Instagram, we kept it tight and sent personal text messages over a couple of days and were pumped that so many people showed up, especially considering it was both Good Friday and the start of Passover. But who wants to spend time with their families anyways? 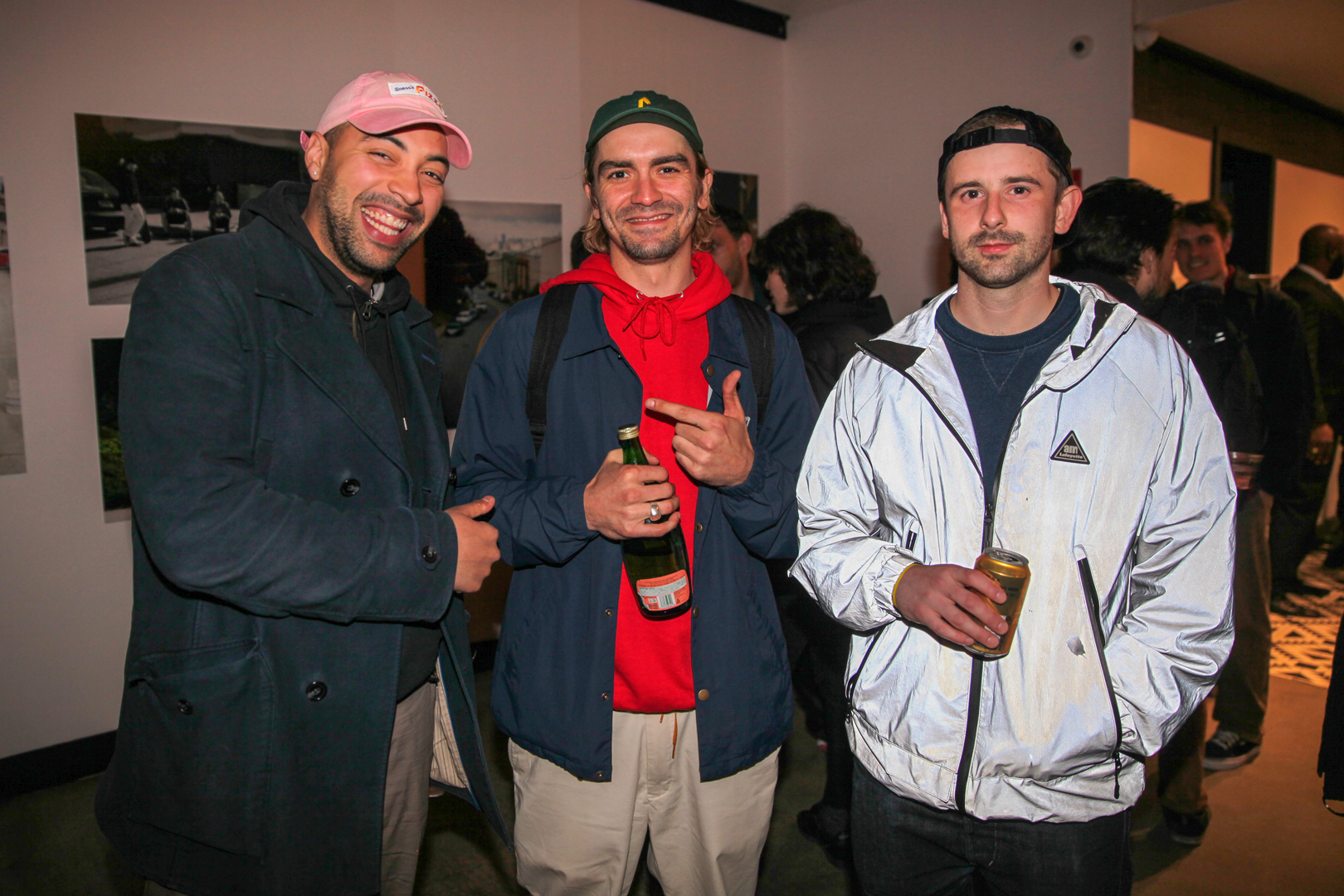 We gotta stop taking pics of anyone wearing a reflective windbreaker. They’re like wearable photobombs and not the fun kind that gets drunk and just wants to show off their nipples. If you want to draw attention to yourself, a nice red hoodie like the one Aaron Herrington was sporting will do just fine. You don’t need to wrap yourself in aluminum foil. 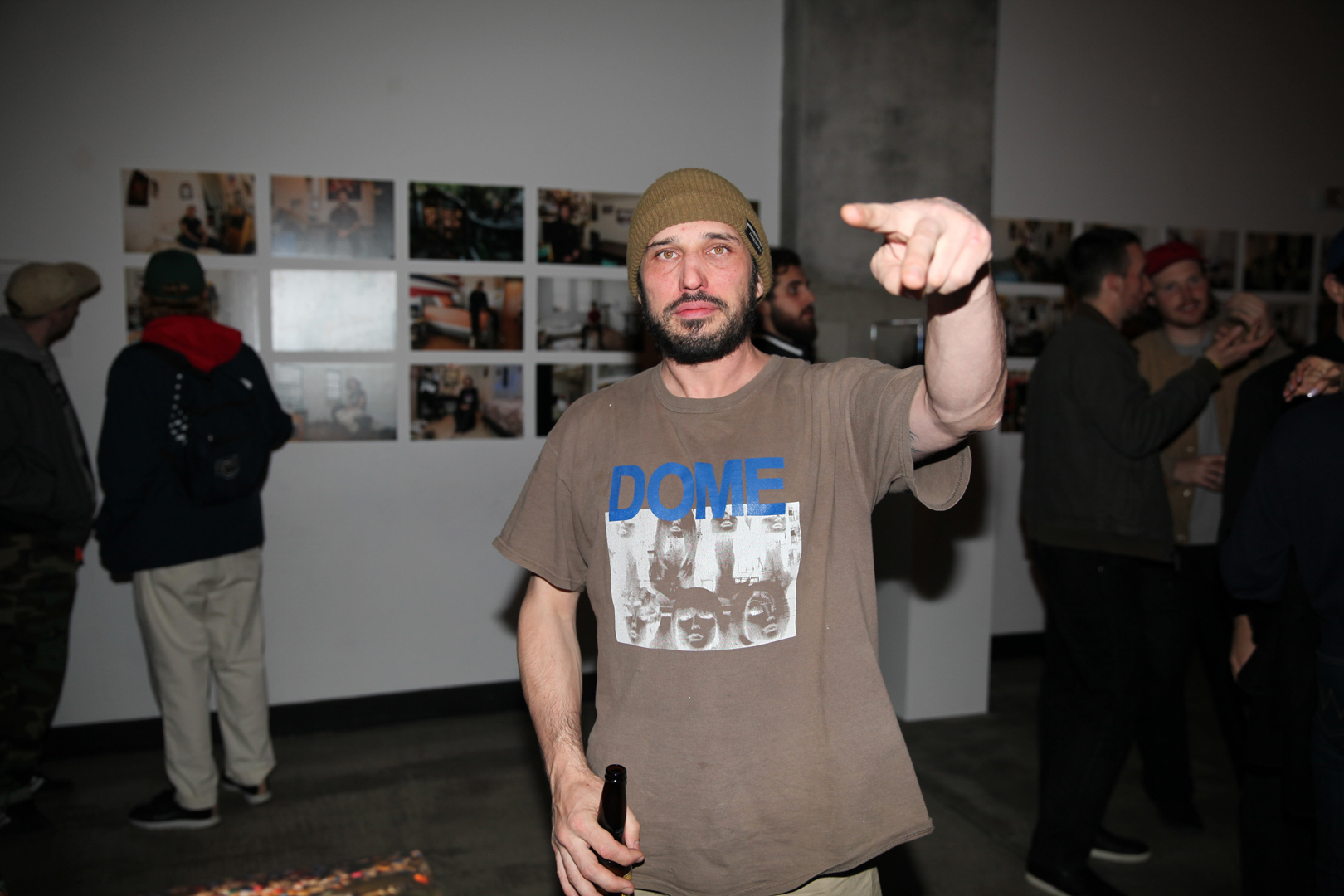 Fred is featured in the book as one of the Patron Saints of Skating, of which few other skaters could be more deserving. In fact, Saint Fred is so revered people are itching to get his holiness tattooed on their flesh. Hit us up if you need a high res photo of the Saint Fred image to consecrate on yourself, or if you have any leads on where Fred got that sick “Do me” t-shirt. 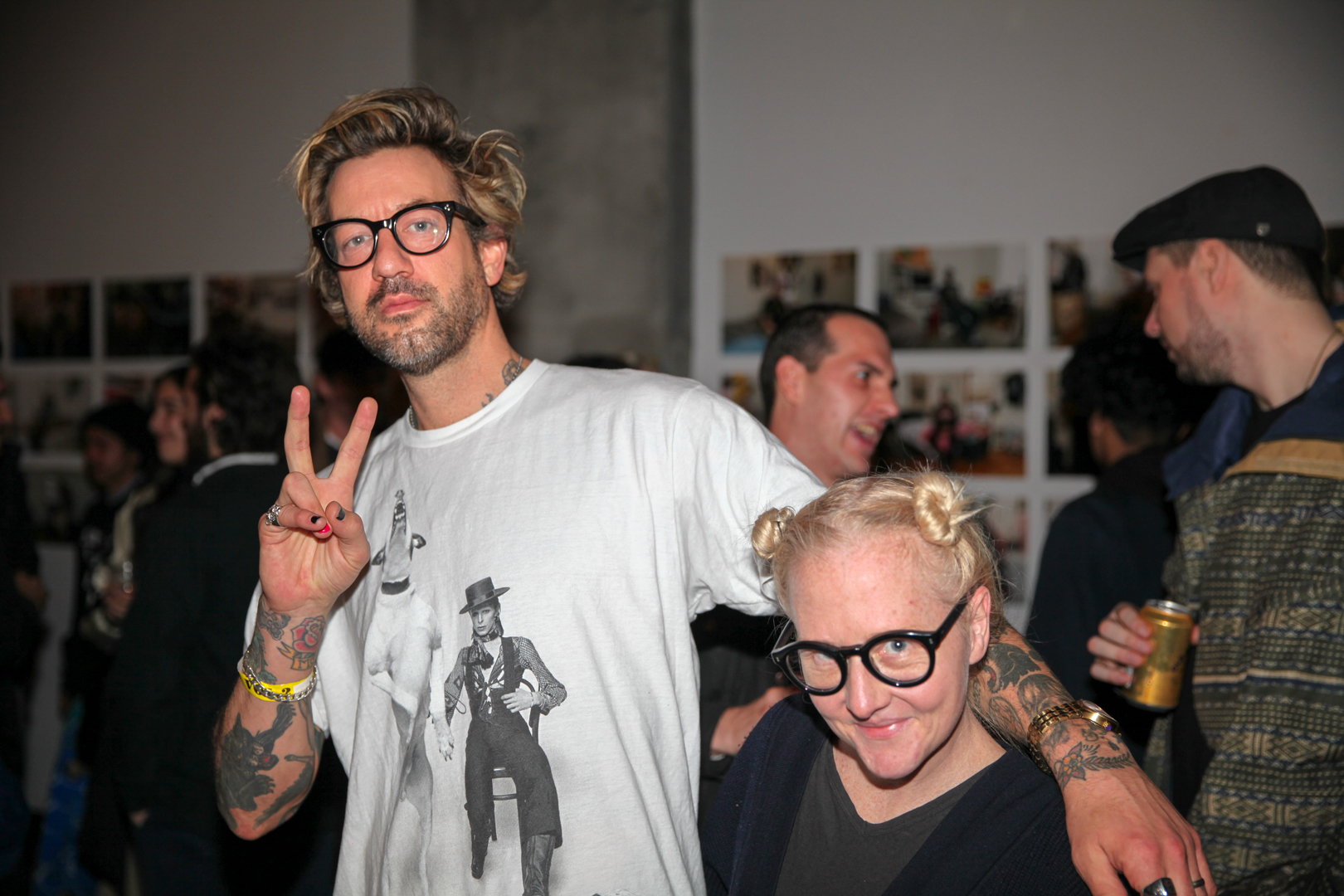 Brian Anderson has a life/skate advice column in Vol. 2, so if you sent in a question when we solicited them a few months back or you’re just curious to see if anyone asked anything really offensive, you can definitely find out in the book. Thanks Brian!

Everyone enjoyed themselves in the photo booth but some really made it a point to express their enthusiasm. Never noticed BA’s tattoo of the Pope getting abducted by aliens before. Everyone’s such a BA fan, I bet aliens would be hyped to come across this scene and the Pope would be even more hyped. “Dude! Your back smith was fuckin’ sanctified my dude!” 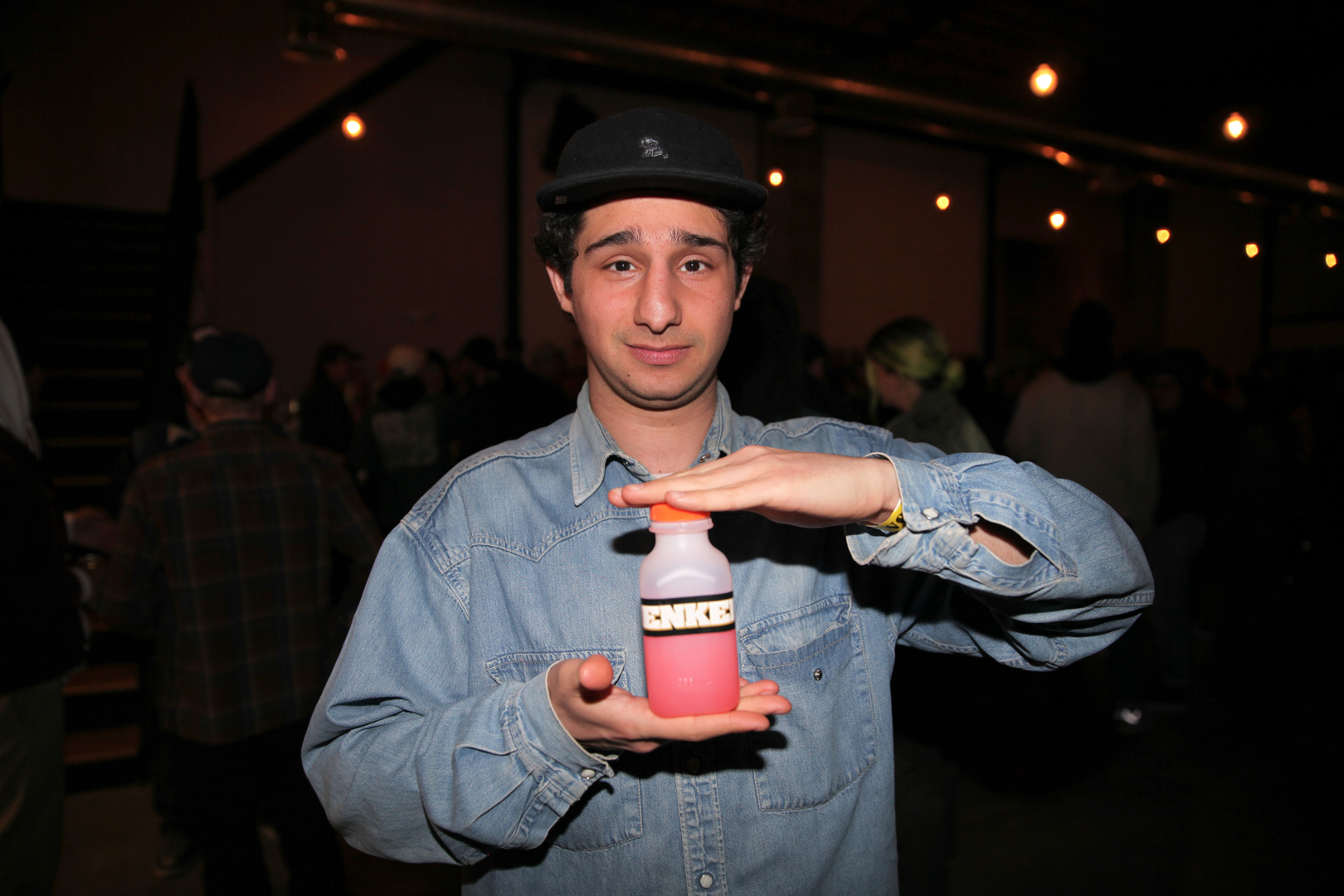 I’m glad people enjoyed these guaranteed hangovers without throwing up at the venue. The recipe’s pretty simple: a lot of orange juice, even more vodka, a few bottles of tequila, and as much Kool-Aid mix as you can stomach. Fun for all ages!

[NOTE: Don’t *actually* give booze to children. Wait until they’re at least 14 or shop sponsored.] 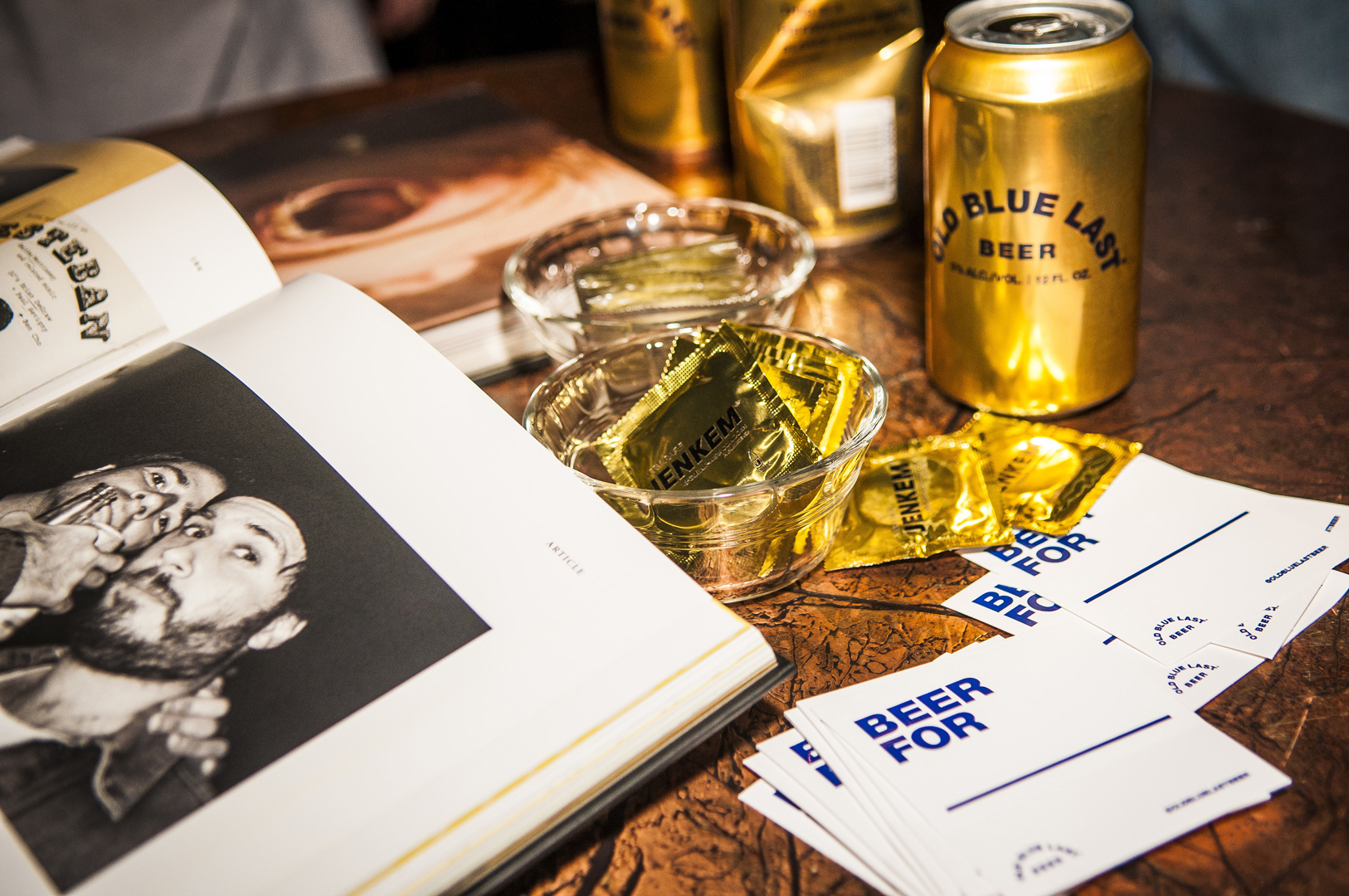 People scooped up the Jenkem branded “regular-ass” condoms quickly, so while we can’t say any babies will be born as a byproduct of the book party, we can say the book party helped keep some genitals nice and safe. Don’t worry, we didn’t give away all the condoms. If you want some, be sure to preorder Vol. 2 and you’ll find a couple rubbers and some other Jenky merchandise not for sale anywhere else. 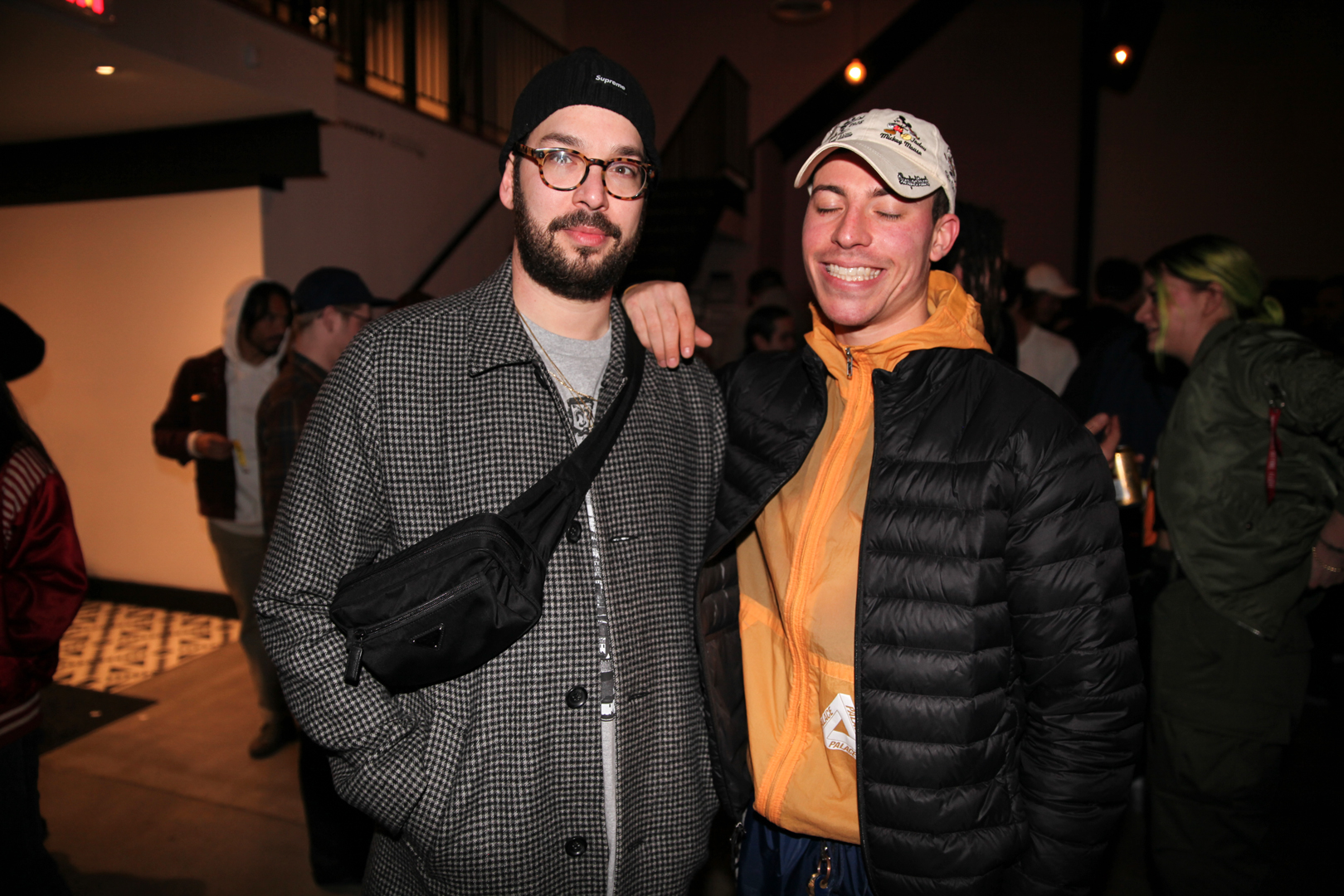 Kevin Tierney (right) pulls off nylon, athletic skate gear better than most, or at least he commits to it more fully than most, which is worth something. Good looks getting on Mickey Mouse flow too, heard they’re coming out with a video real soon. 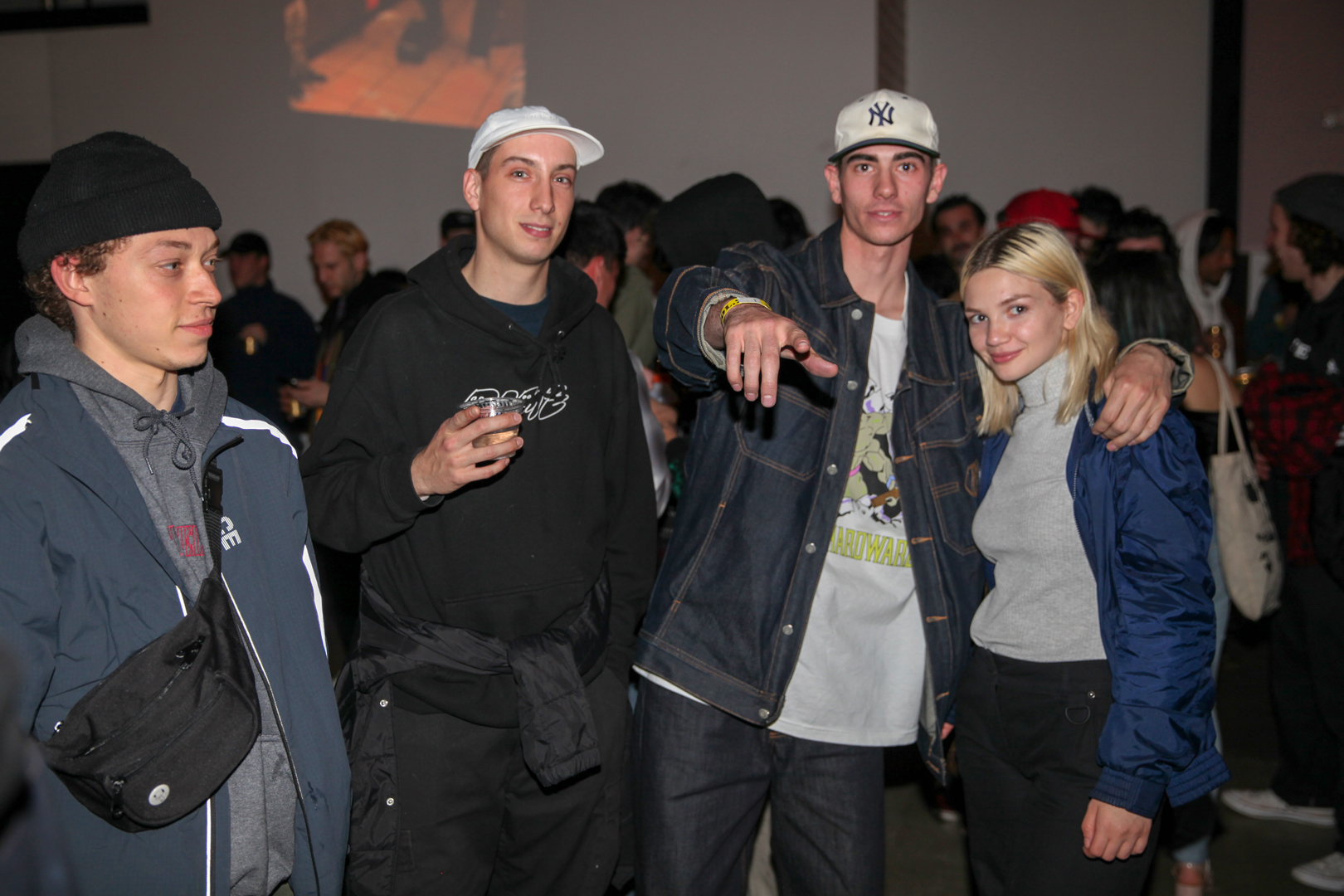 I always wonder how skaters’ significant others feel at skate events. Are they bored? Excited? Wondering when they can leave? Hopefully John Shanahan‘s lady friend wasn’t too sussed out by the skaters scoping John’s all-denim kit and asking if he’s sponsored by Wu-Wear. 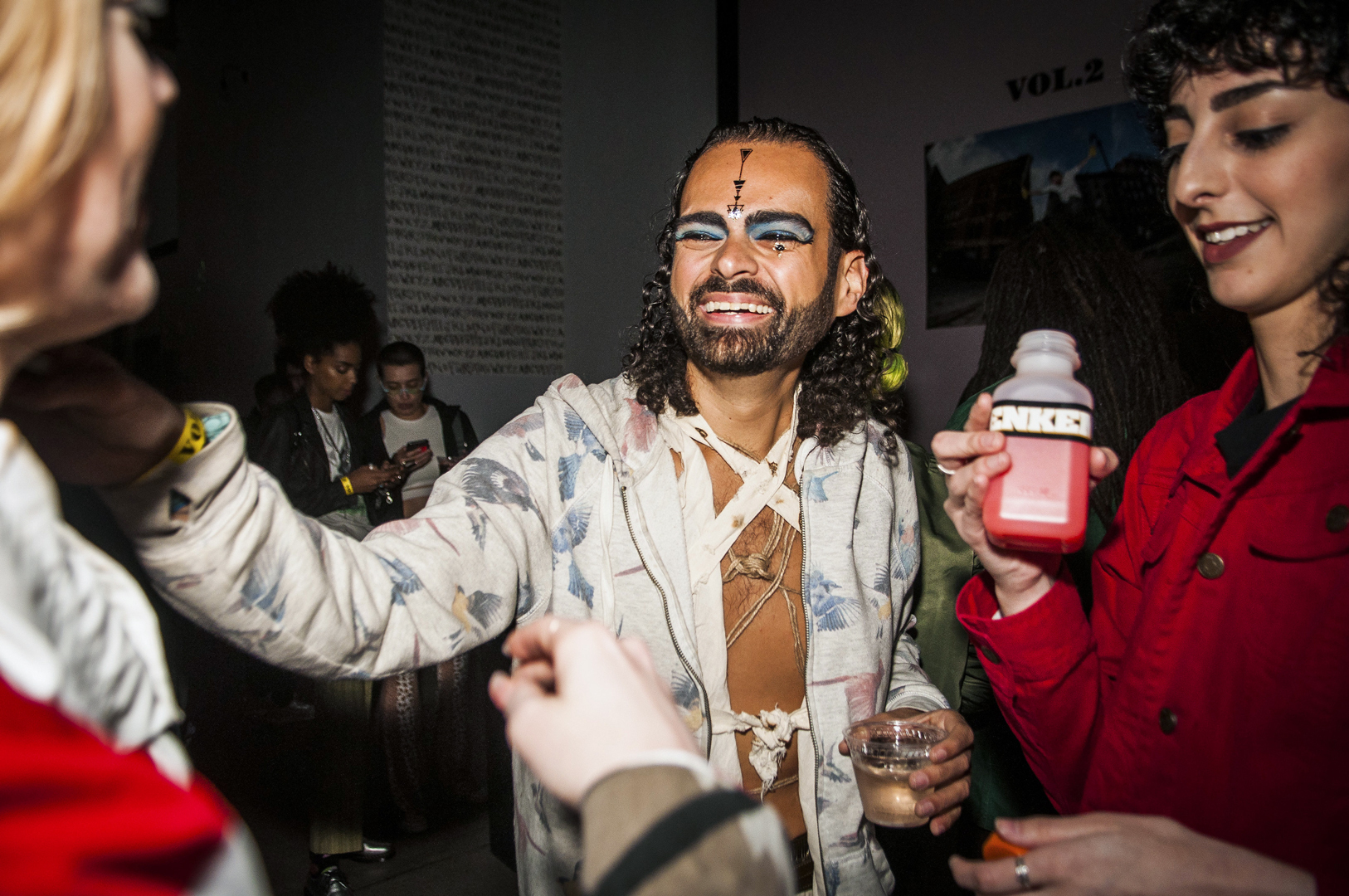 Jesus Christ Superstar came back from the dead a few days early to party with us before he had to make his Easter appearances. While he couldn’t officially give Vol. 2 a holy blessing, he offered to spritz the book with a sacred tinkle. Fuck yeah, Jesus. 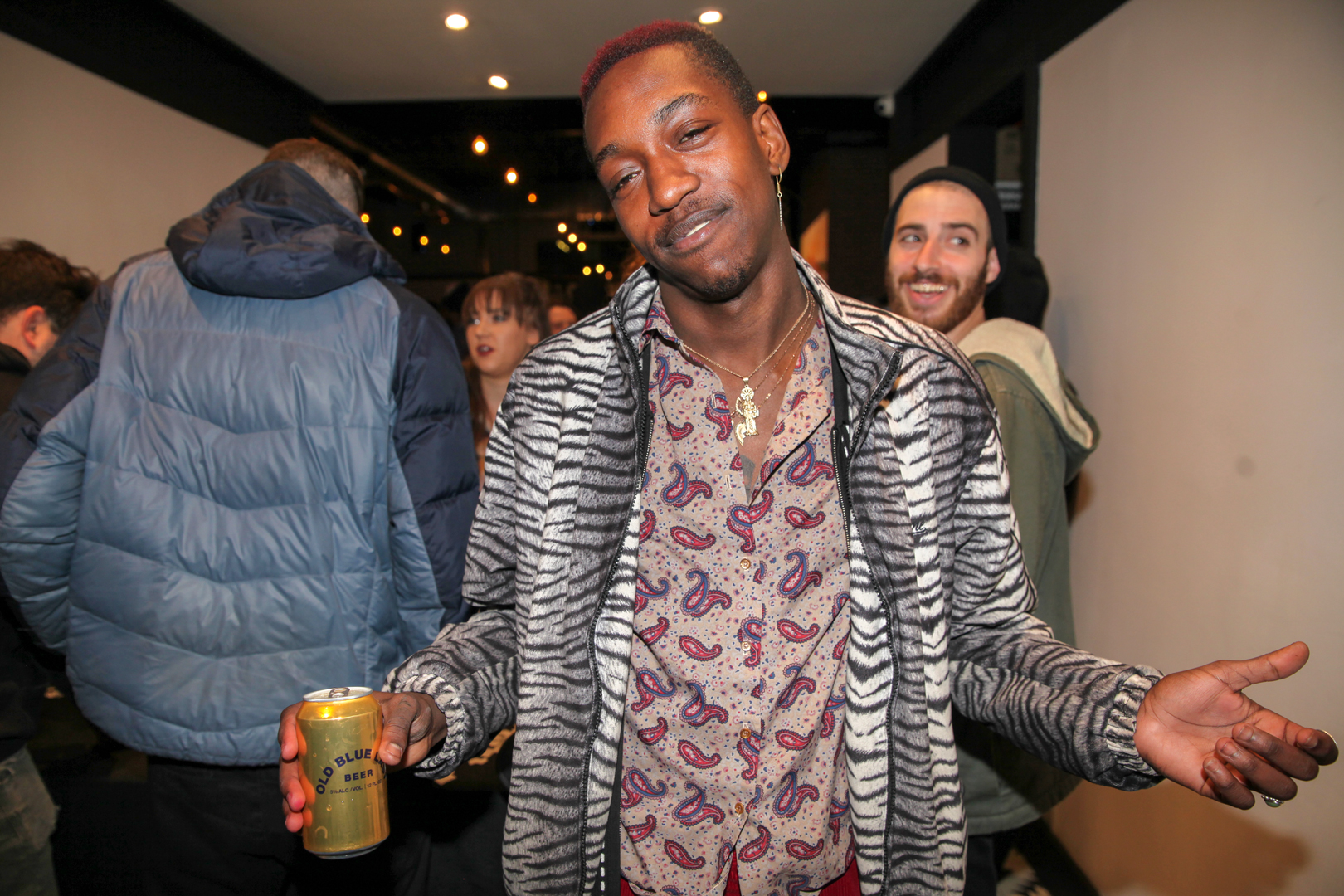 Shredmaster Keith gives me hope for the youth. Seeing him cruise around like a Tasmanian Devil and rock animal print anything without giving a fuck proves that not all skateboarders have become soft. Sure, he’s almost run me over at the park countless times, but that’s his charm. Shredmaster, stay aggro. 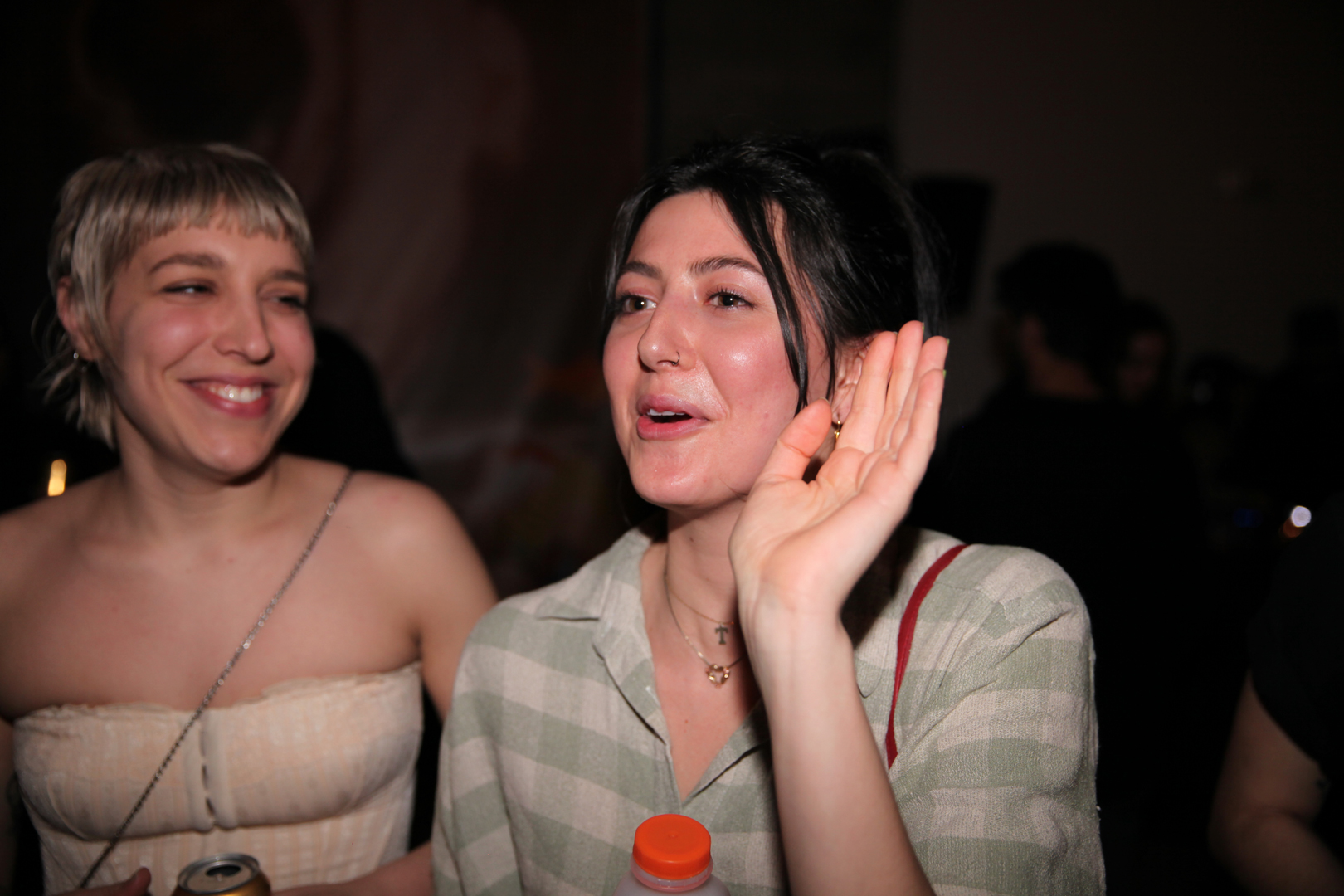 Special guest appearance by our latest Date A Sk8er contestant, Lindsey. She came to the party with some friends hoping to show them that Jenkem is more than a skateboarder intimacy advocacy group. But with all the dudes coming up to her saying, “Yo, so you like skaters?” the message was kinda lost.

Thanks to everyone for another successful Cons X Jenkem production. Together, we’ll keep that sweet, sweet content flowing right out of your screens into your eyeballs. We really do have the best readers. Thank you for coming / supporting / spamming / drinking!!!!!