PHOTO DUMP: A WEEKEND IN PORTLAND AT THE CCS CONTEST 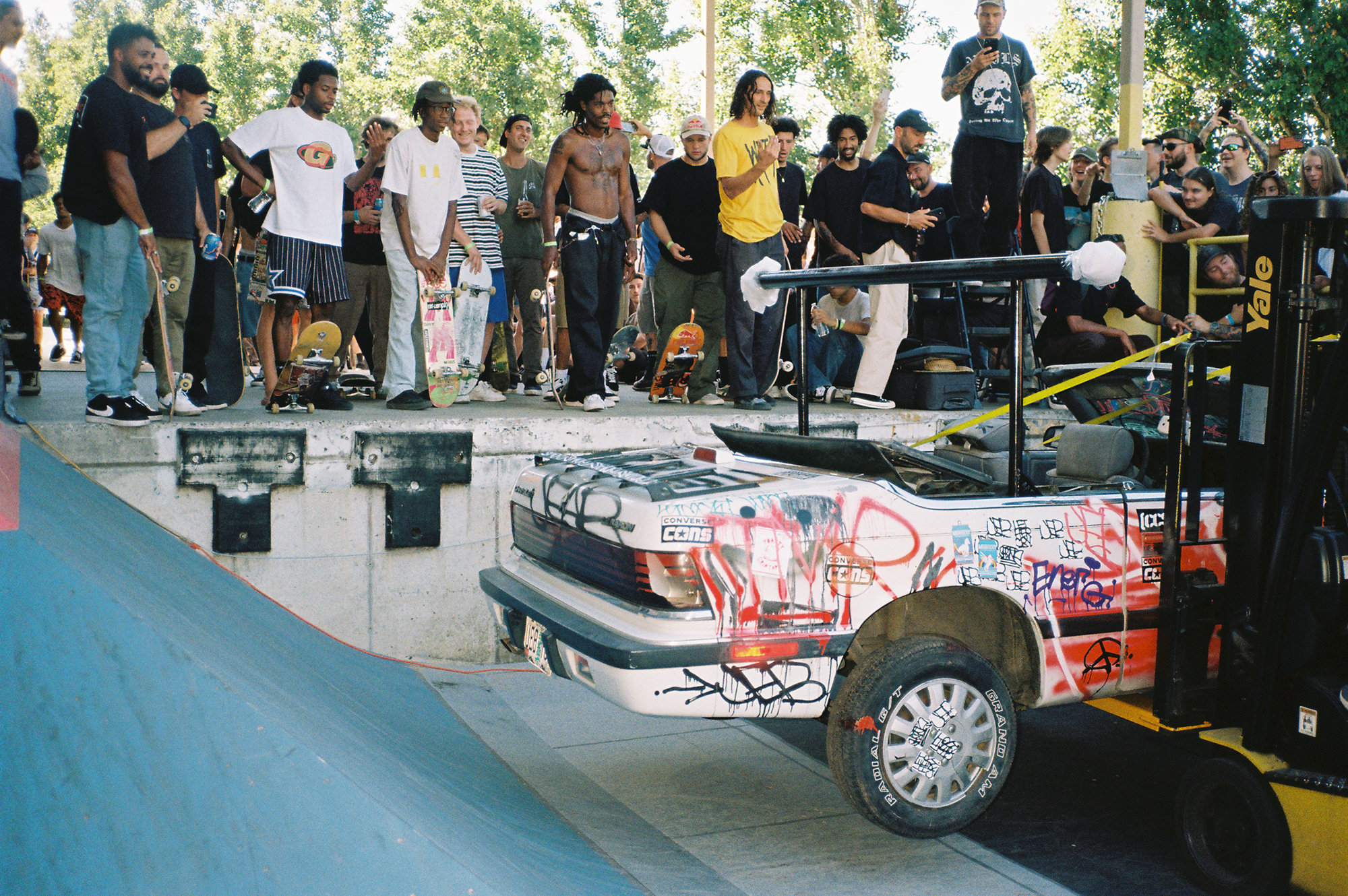 I’ve been spending the last month on the west coast, and have posted up here indefinitely, basically. It’s been a good time so far, and I’ve been able to float around, hang with a bunch of people I rarely get to see, and just take opportunities to do random shit as they come along. One of those was this impromptu trip to Portland.

CCS brand honcho Matt Price caught wind that I was on the west coast, so he hit me up asking if I was interested in doing some coverage of an event he was throwing. Basically, he had a team build out a recreation of the iconic LA Car Wash spot—you know the one–and have skaters come out for a little jam-style contest.

I’ve never really spent much time in Portland, and Price sweetened the deal via some drinks at the bar the week prior, so I figured, why not go for it? At the very least, I was going to have a good time seeing everyone, even if Portland itself is as weird and silly as they make it out to be in the show Portlandia. 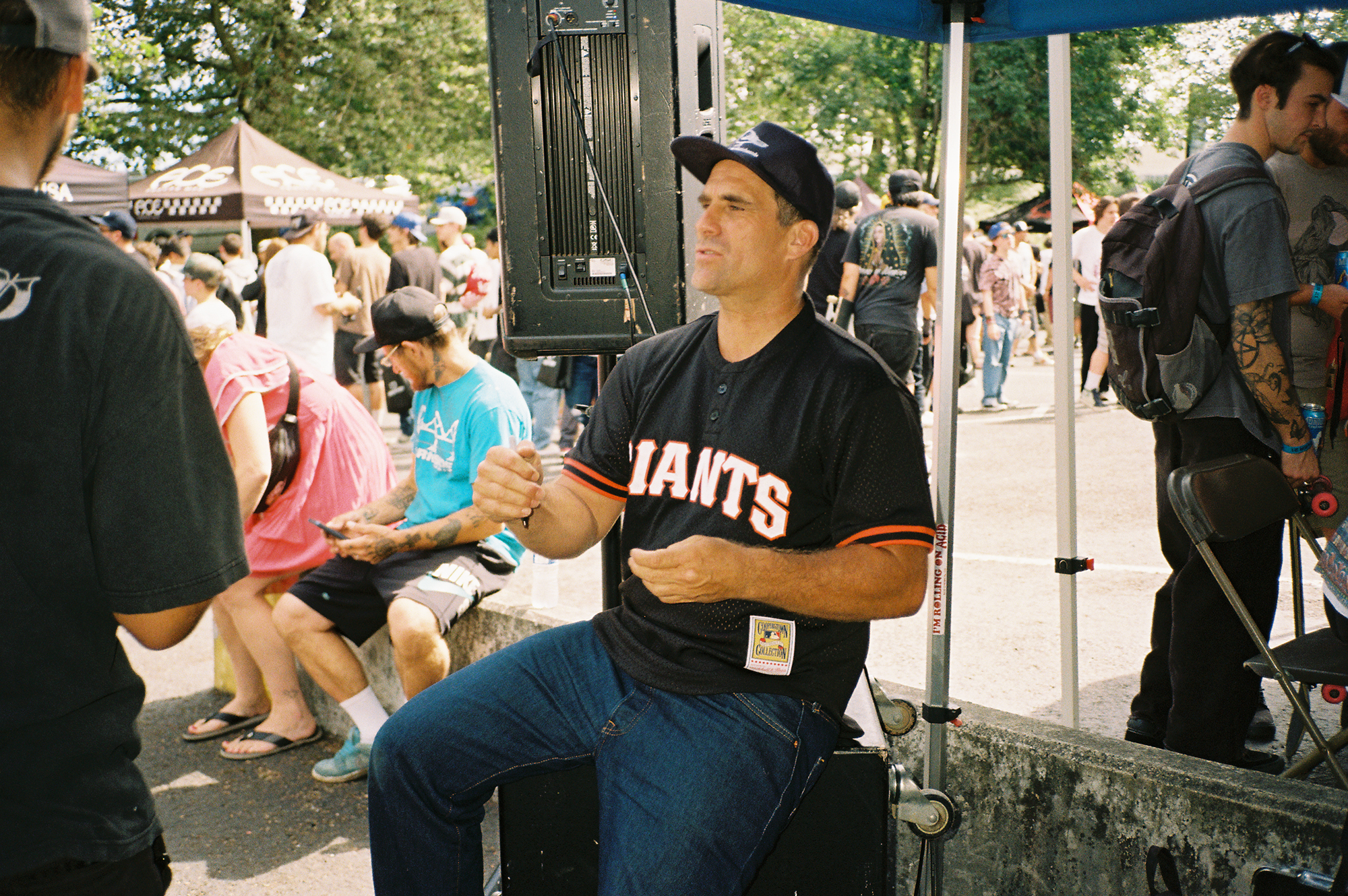 John Cardiel was the main judge for the contest, picking the best overall skater, which is a clever move because if you don’t like the results, who’s actually gonna argue with Cardiel? We took a couple of shots at the bar the night before with Milton Martinez, who had just introduced him to fernet, which if you haven’t had, is like a mix of Jaeger and toothpaste. 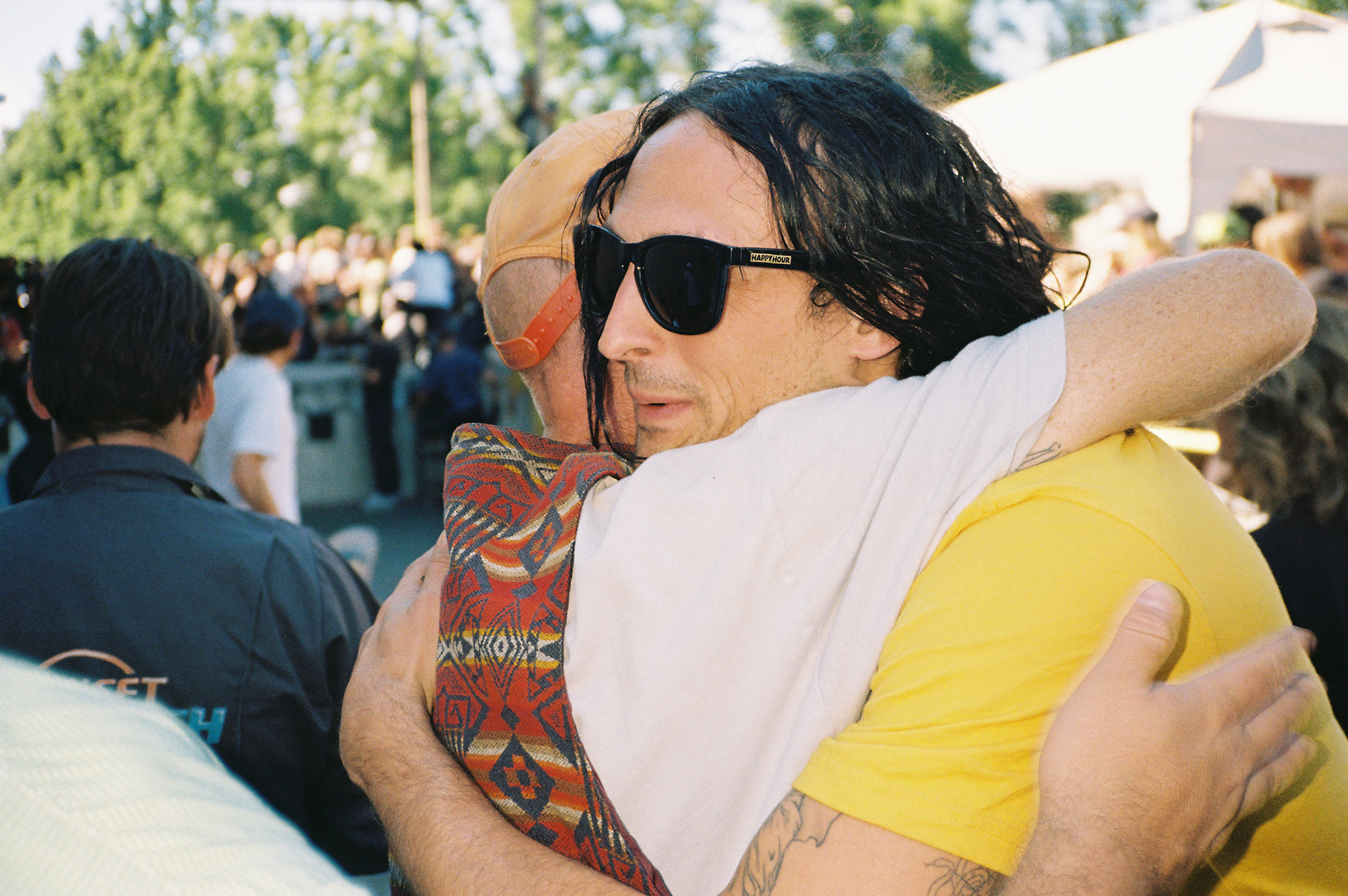 I really didn’t know much about Oregon before this besides The Goonies is set there, and that they have the last Blockbuster in the world. Now that I’ve spent one weekend there and am clearly an expert, here’s what stood out to me:

1) It’s beautiful, the access to nature so close to downtown is incredible, and the atmosphere is laid back.

2) A lot of people look like they were in hardcore or screamo bands growing up.

3) There’s a ridiculous amount of strip clubs. I guess if you’re looking to really lean into becoming a full-time degenerate, this is a good spot for you.

Oh yeah, and people are friendly, in the nice to meet you chatty way, but also, sort of reserved. I guess they are friendly as a formality. The quality of living seems pretty good too. At least you get some good bang for your buck. 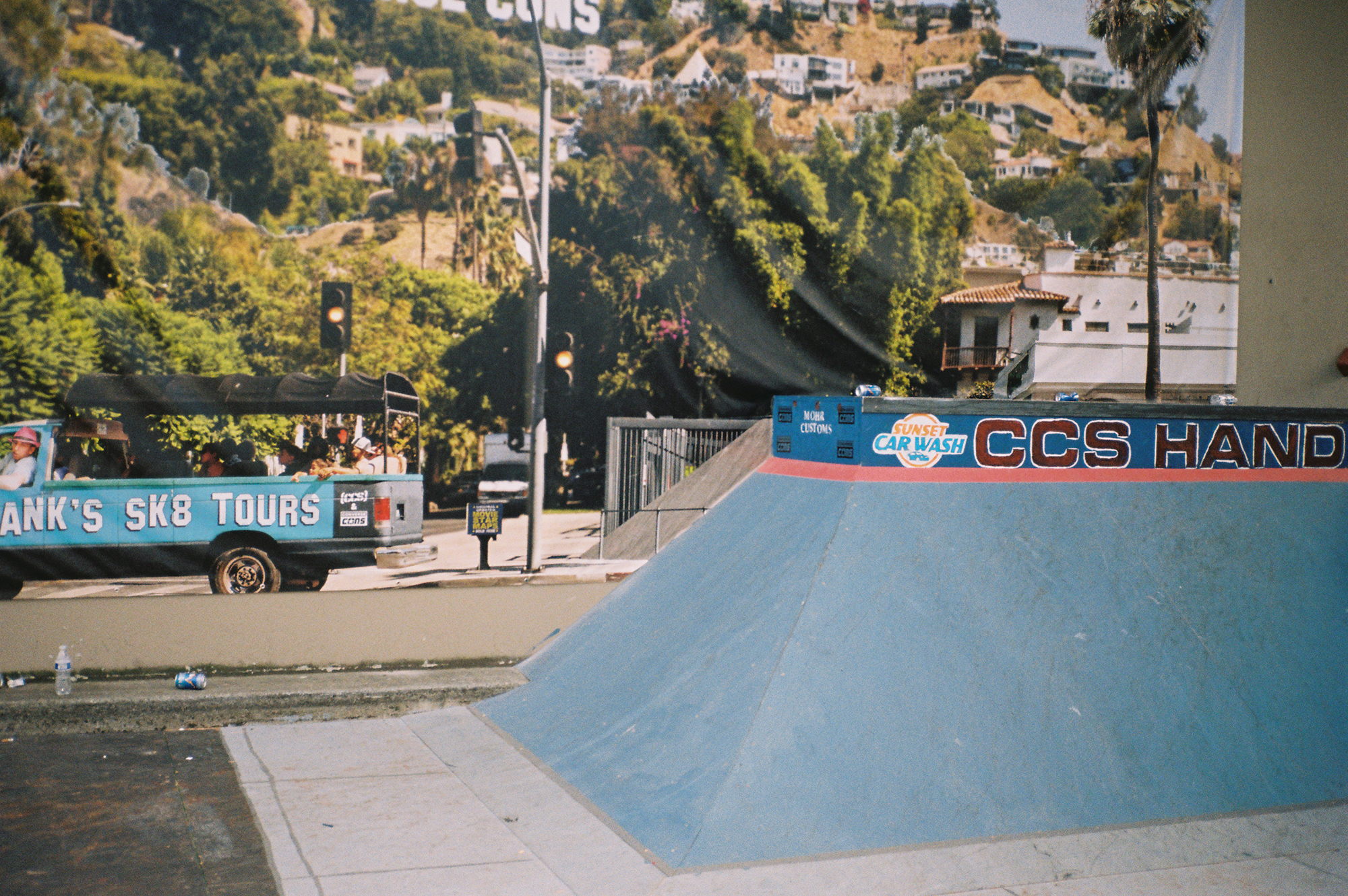 Here’s a mediocre pic of the lil’ car wash at the contest. Yes, it’s small, so let’s call it more of an homage to the carwash than a recreation. What, people thought they were really gonna rebuild the fucking car wash brick for brick, and have two people skate it, six people hurt themselves and one person die? “Presented by CCS,” let’s go! 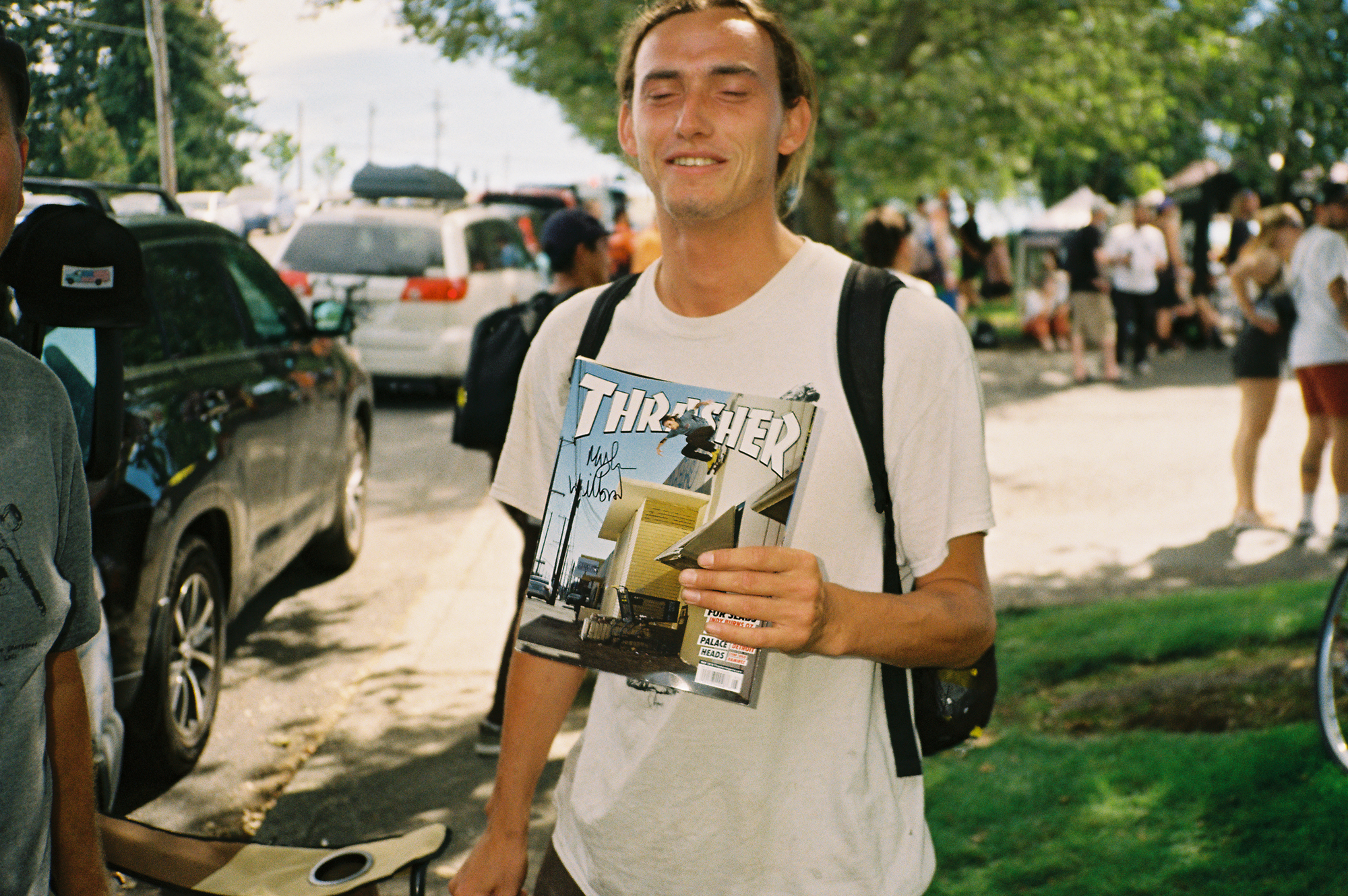 Sorry, Myles, I know this isn’t the most flattering photo of you, but I’mma use it. Myles is one of the more underrated talents at the moment, and he dropped a little part with us a couple of months back, and we consider him to be part of the fam. As an underdog from Baltimore, we’re rooting for him and his crew of homies. 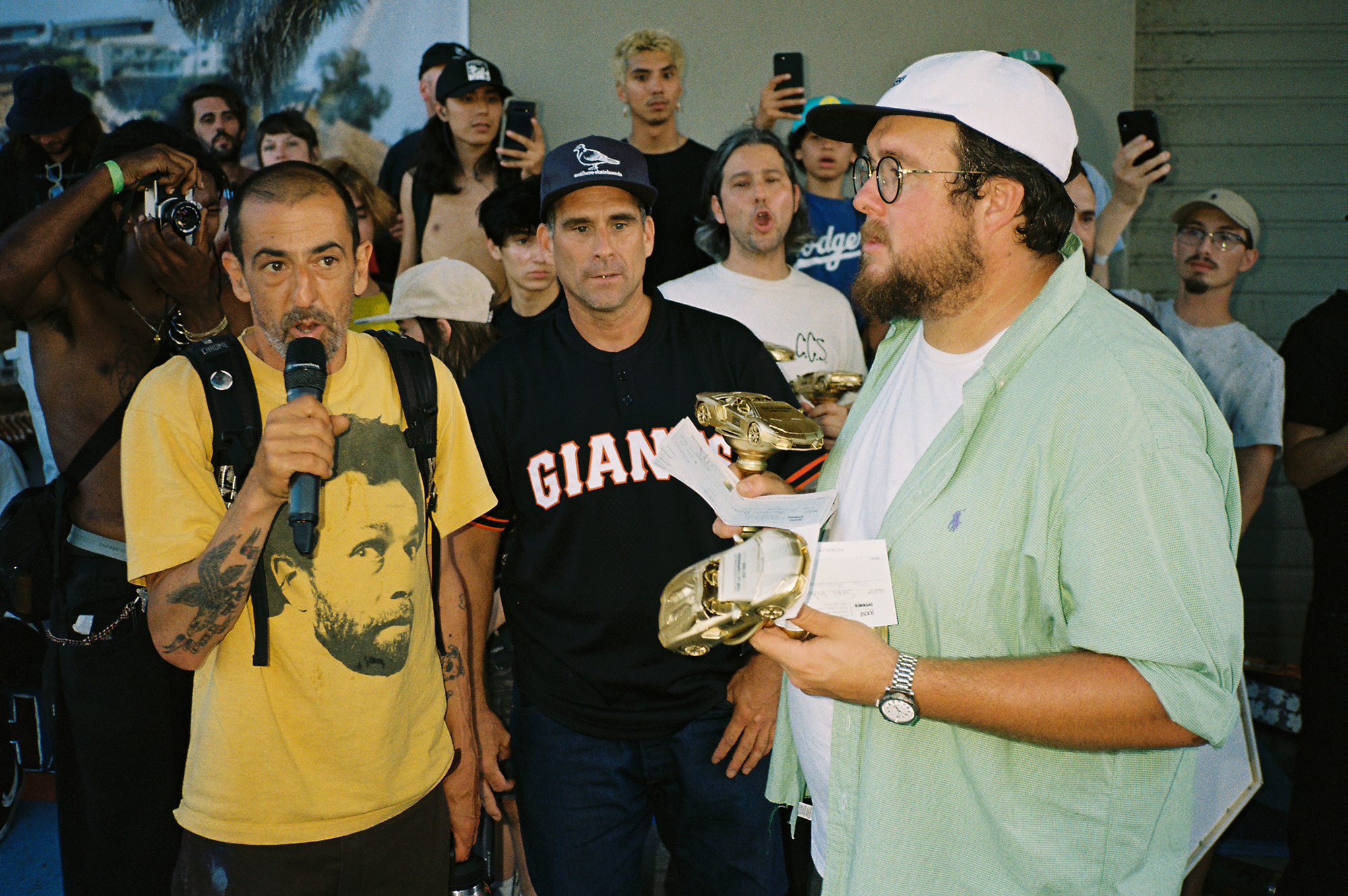 Most people in the world are lazy. That’s true in the skate world too, while it is driven by passion, most people want to do as little as possible and get a free handout. To me, Matt Price (right) shines in the space because he’s always down to put just a little more effort and thought into his work, and it shows. For the trophies, he sourced a bunch of toy model cars, spray painted them gold, and found a candle stick-looking thing to glue them onto. He’s not reinventing the wheel but it’s a nice change from the usual oversized check with your brand logo plastered all over it. 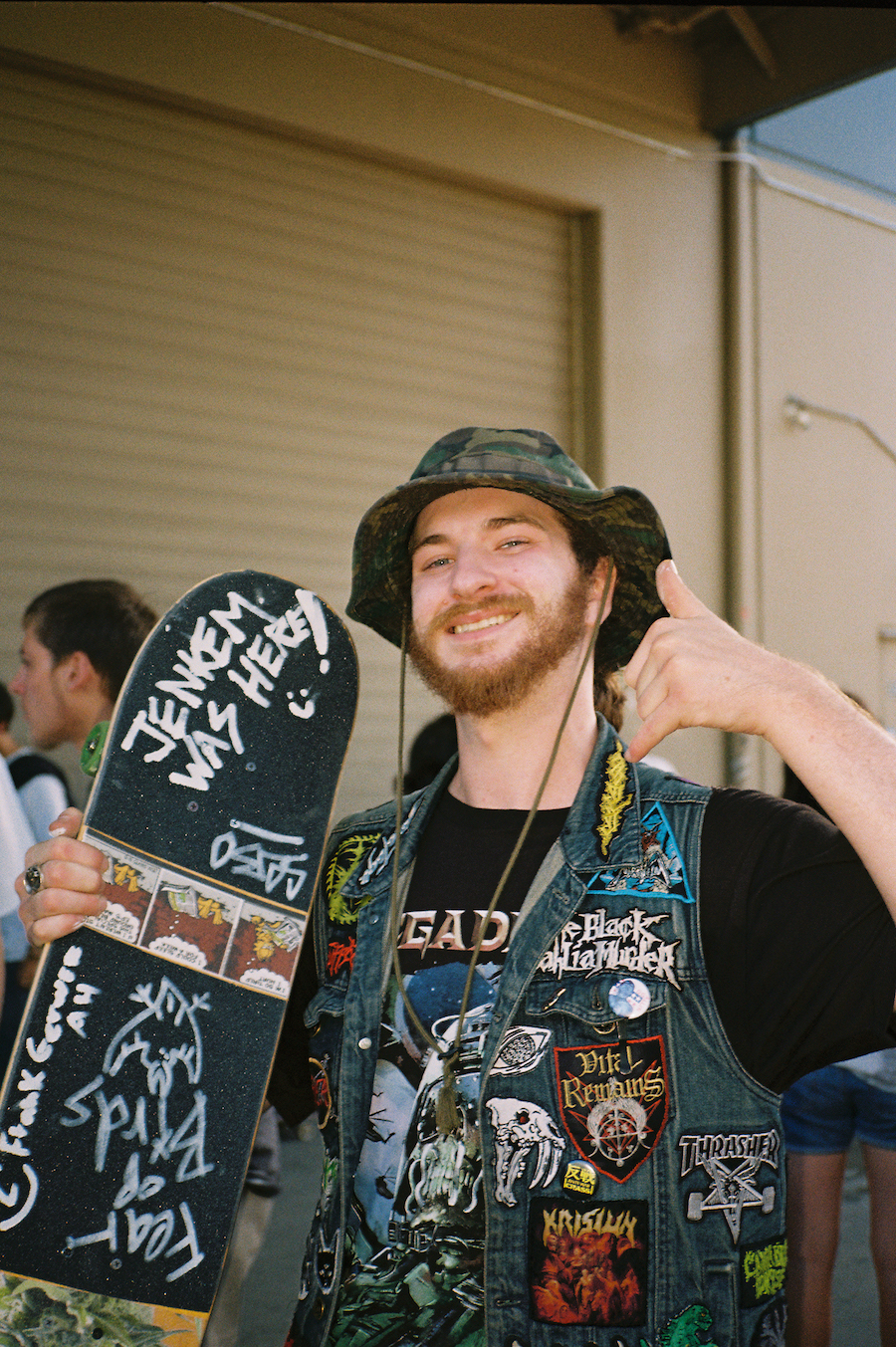 I forget this dude’s name, but he was super kind and wanted me to throw some words on his board. Since I’ve been doing more public-facing features like the Nine Club, Calling World Industries, and Interviewing Werner Herzog I’ve definitely been getting more nods from strangers and I’m not gonna lie, it feels good. I can imagine the release of endorphins and can totally see how insidious it can become, clouding your vision, making you want more. It’s good to be aware of and be thankful to avoid becoming an egotistical prick. 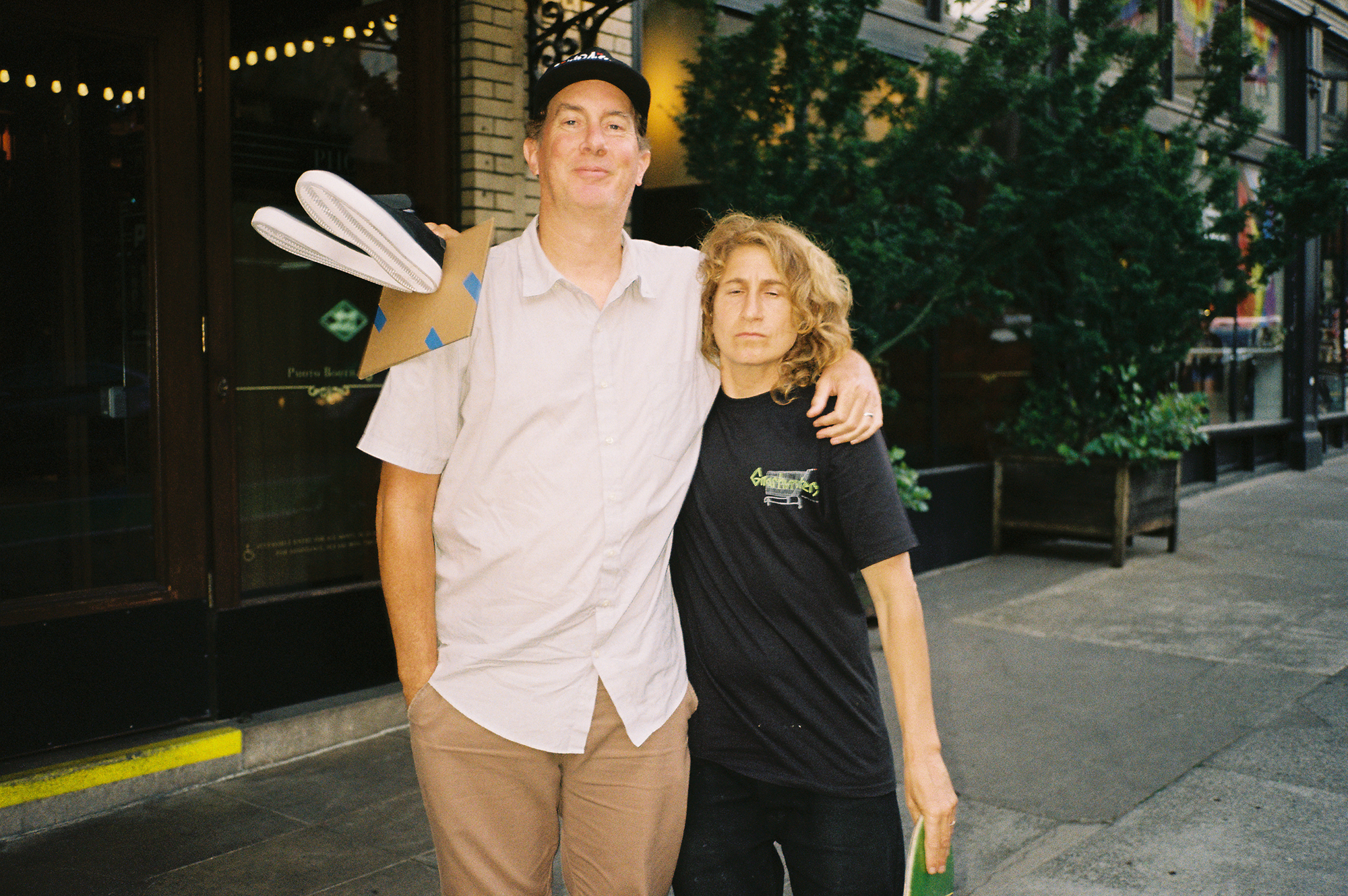 On my way home I had the privilege of grabbing dinner with Elissa Steamer, Brian Anderson, Matt Milligan, and his family. These people basically all grew up with each other and lived the skate life together, so I tried to shut up more than normal and just listen to be respectful of their deep friendship. Matt Milligan’s daughter had just lost some baby teeth so at the table we were discussing how much she thought the tooth fairy would give her, which I obviously haven’t thought about in a while. Also, why do we get money for our baby teeth again? Gonna have to wiki this now. 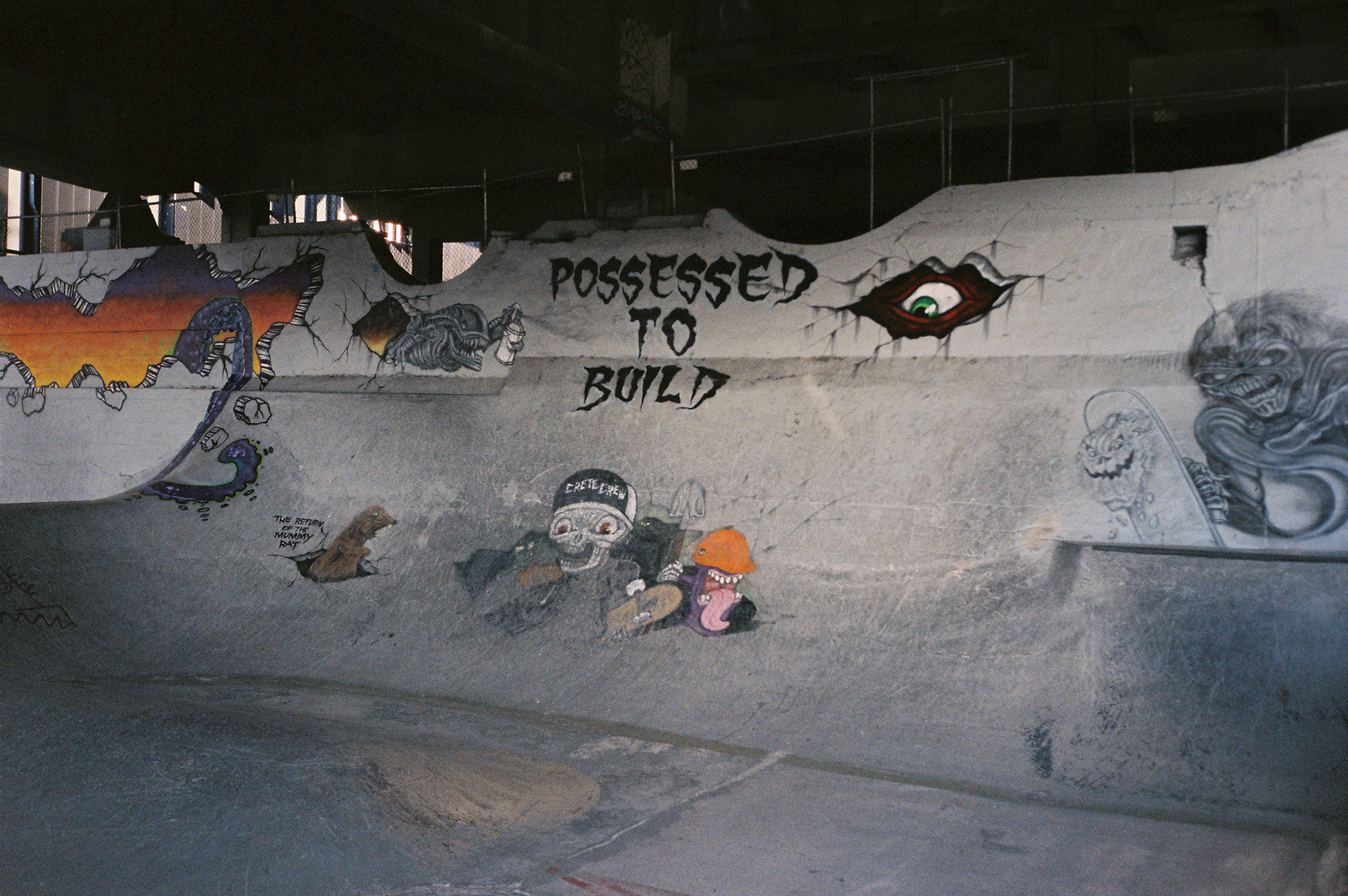 How would I describe Burnside Skatepark to someone that has never been? It’s powerful, a bit intimidating, historic… It’s sort of like one of the seven wonders of the skate world, an unshakeable monolith. It also sort of reminds me of Castle Greyskull from He-Man. For someone coming from New York City, a place with barely any transition skating, I really felt out of my element and had a lot of respect for anyone able to tame the park. 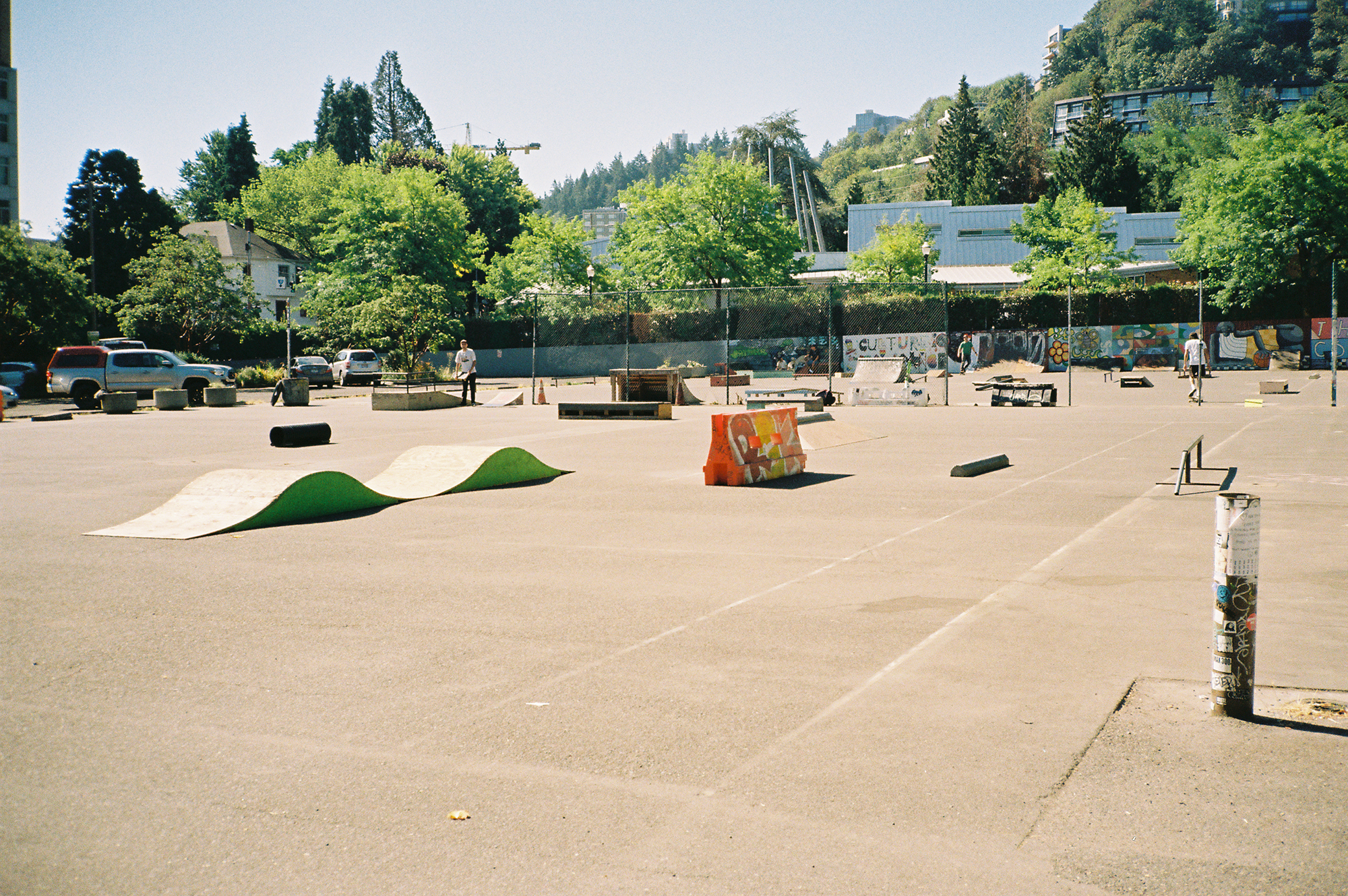 OK, this is more my speed. This is like the Tompkins of Portland, called The Courts. It’s actually on college property, and I guess they worked out a deal with the school and are open and accepting of skateboarding there. Everything is low and accessible here, perfect for people like me who still pop their kickflips inconsistently. 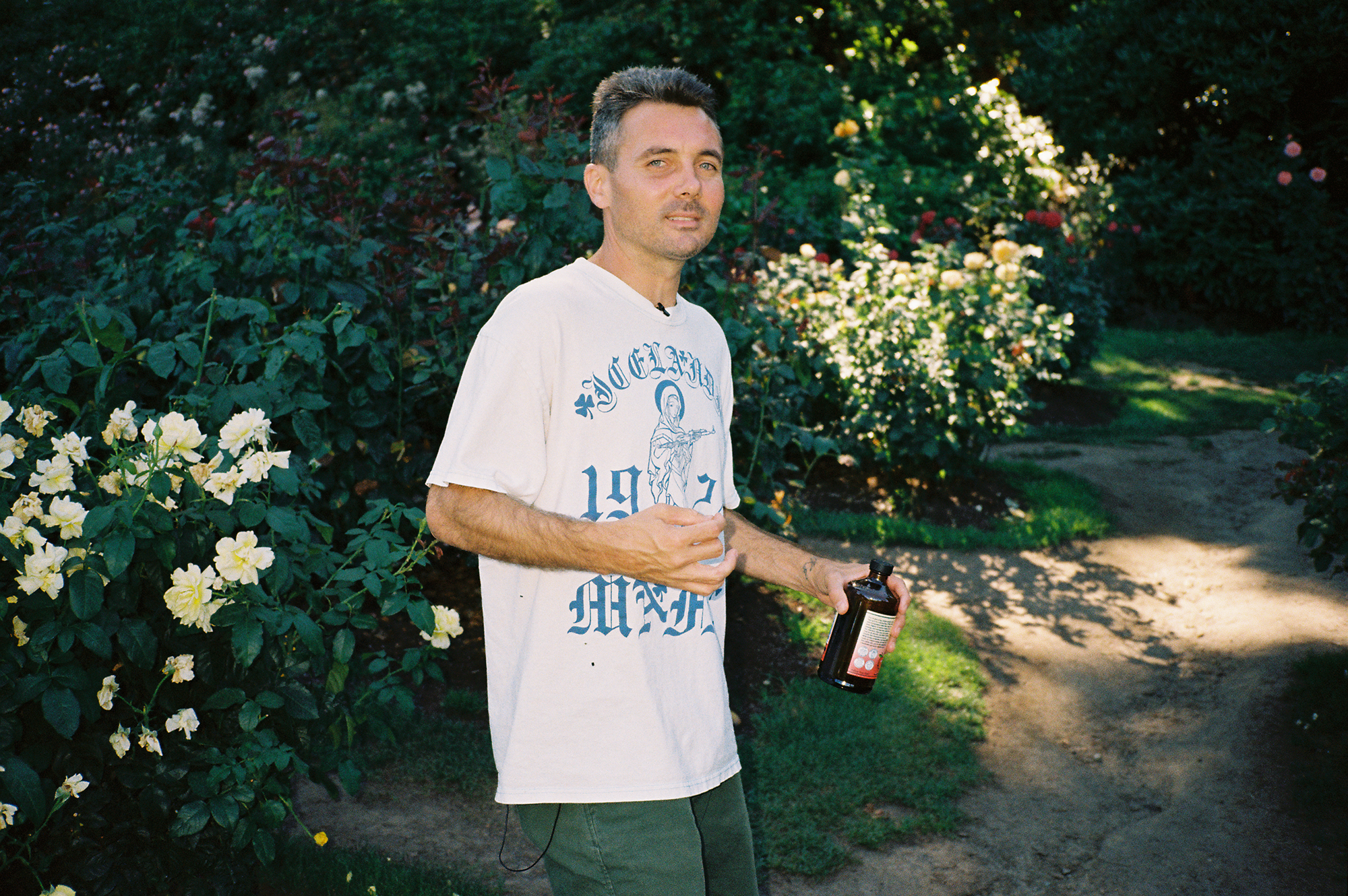 Remember Brent Atchley? He was the dude that flowed like water in that Element video. When I got to Portland I hit him up, seeing if he might want to talk about his ins and outs with the professional world of skating. He got back days later, but it was three hours before my flight was supposed to take off to go back home. I said fuck it, missed the flight, hung out with him for a day, and booked another flight later that night. Gotta take the hit once in a while. I don’t think it will be a big feature, but definitely, one of those “where are they now” type interviews that I think will be worth it. Coming soon… 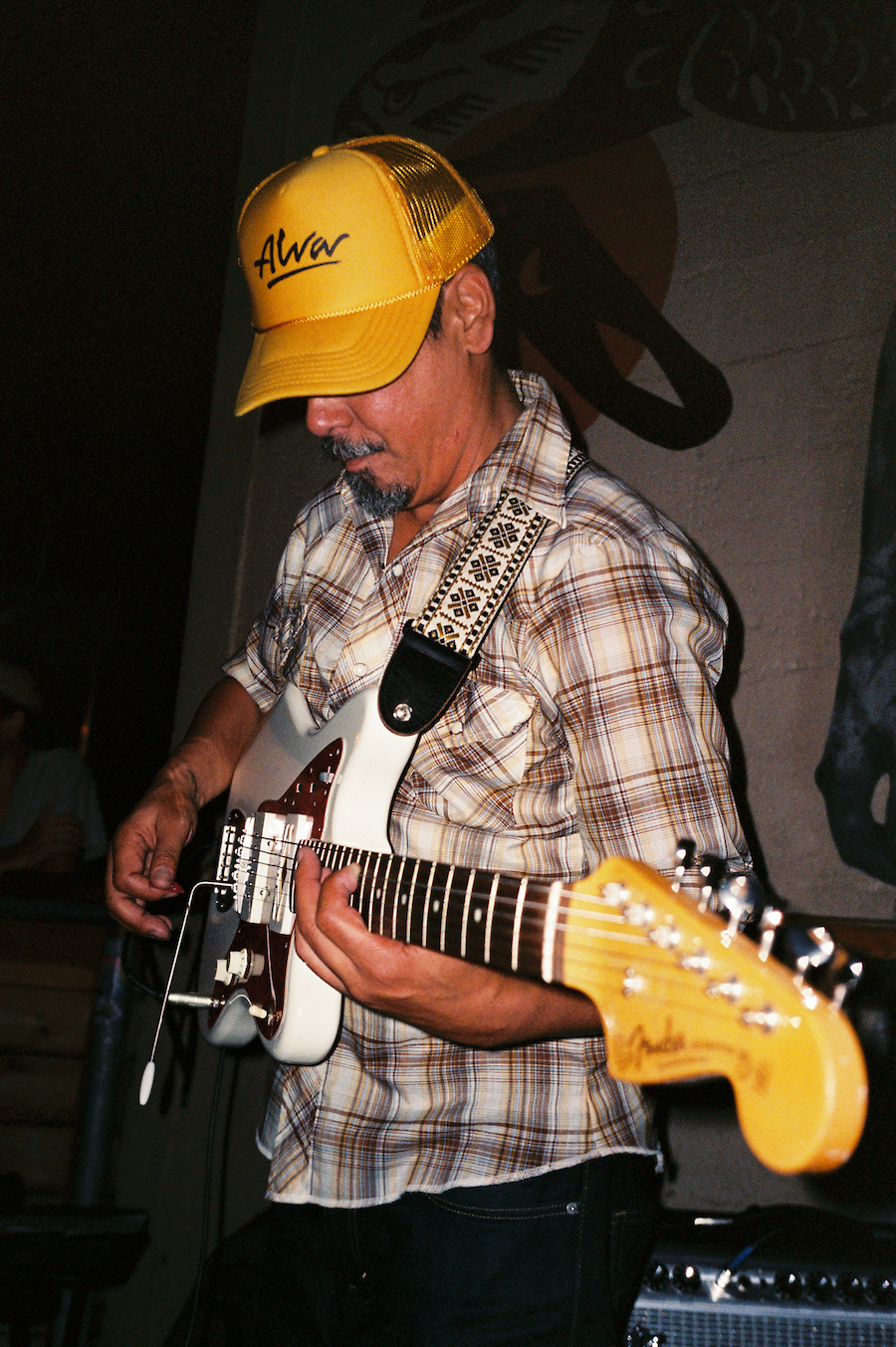 When I was 14, my brother gave me the Tommy Guerrero Album Soul Food Taqueria. It’s a smooth instrumental blend of music, super approachable, good cafe music or on headphones as you take the train. I listened to it front to back probably 50-100 times. I guess the funny part is he didn’t even mention it was the Tommy Guerrero, I thought it was some random Latin guy, only later would I find out as an adult. Peep the album if you don’t know it already, I was always partial to track 4, Tatanka. Anyway, he played live at Thunderbird bar, I experienced it, and now all you get is this photo. Sorry.