When you take one of the best characters from the greatest TV show of all time and put him on a skateboard, magical things are bound to happen. As they did when John Mcguire dressed up as Kramer and started to get creative. Equal parts eccentric and inventive, I truly believe Kramer would have been a groundbreaking skater.

Q & A with John McGuire (The Actor / Skater)

How did the idea come about??
My girlfriend surprised me for my 42nd birthday with tickets to see a comedy appearance of Jerry Seinfeld. I couldn’t have been more stoked. Back in 2007, my girlfriend and I dressed as Kramer and Elaine for Halloween. My parents suggested that I bring my costume out of retirement and dress up as Kramer for Jerry’s show.

I didn’t even think twice about it. Of course I would go to Jerry’s show dressed like Kramer. We were running late so we had to take a cab and as I ran across the street, someone yelled, “Hey ASSMAN!!!” That was worth it right there. The next day I woke up kinda hungover and still had the costume on. I had plans to skate a few spots with some buddies and just showed up in costume. It just kind of snowballed and my good friend Tim Olson (Tim and Eric / Roger skateboards fame) and I just took it from there.

How did you prepare? Did you have to study Kramer to get a lot of his mannerisms down?
No, not really, I’ve always had this sketchy style. Each session got more and more based around the question, “how would Kramer skate?” Then we started to go with a lot of the butt riding down stairs and wacky flamingo moves. It wasn’t a real stretch for me because i’ve always had these long and lanky slams and a terrible push. I guess we thought that if Kramer did skate, he sure wouldn’t skate as smooth as a Kalis or a Mike Carroll. But, the lifestyle stuff and me just running around and doing the “Dog Sex” and the Daffy move was the last day of filming. We spent some time picking locations that really looked NYC and would compliment the rich visual tapestry of the greatest TV show ever. The show about nothing. 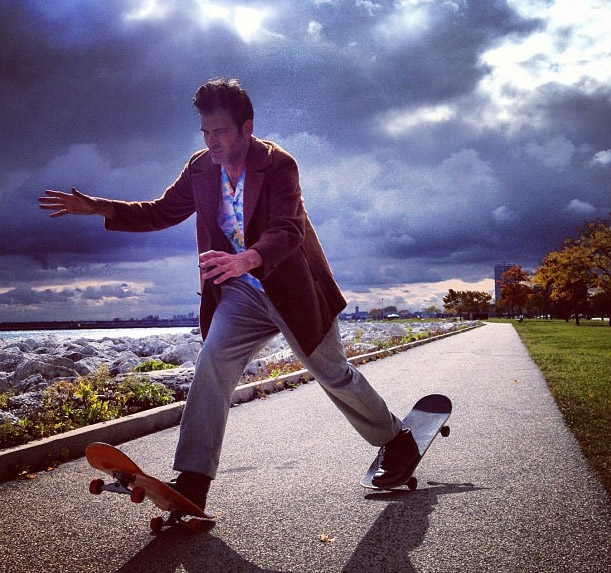 What’s coming up in part 2?
Hard to say, my friend John is the perfect Puddy so he’s in for any potential sequels. As far as finding someone to do a George…that’s kinda a slippery slope. You would essentially be going up to your buddy and saying you’re perfect…”Fat, bald and angry.” Also, it may be tough to capture that kind of original magic that made this one so fun. It’s rare that a sequel is better than the original except in few cases like Predator 2, Robo-Cop 2 and of course the holy grail of sequels, Empire Strikes Back. I really wanted this video to appeal to a broader audience than just Seinfeld super fans. That’s why I used the Sausage song, the Puddy cameo and the Death-Blow. If we made a second video it might be more based on shenanigans and less skate tricks. Is that bad? But, the idea of exploring the themes in Kenny Rodger’s Roasters could be awesome. An element of Newman or Frank Costanza…….GOLD.

Do you have any other ideas for skate skits or any other characters you want to try out?
I’ve never really thought about it that way. But, I’ve always been super into Halloween and dressing up. I’ve actually done like 3 Seinfeld related costumes. Back in 2008 myself and 5 friends entered a submission to the Lucero / Thrasher Magazine Slappy contest and filmed a clip called Slappy Curb your Enthusiasm. In 2009 I dressed up as Larry David but didn’t think to film a few slappies in that costume. Man, to do the Larry David signature run and the, “Pretty, Pretty, Pretty,” deal on a skateboard would have been a gas. I feel like Larry’s skate style would be pretty unique also. More refined than Kramer’s, but neurotic and equal parts intensity and comedy…maybe like a Jason Dill?

Words: Skittles
Photography courtesy of: Tim Olson (@instacramps on Instagram)
Check out more of John Mcguire’s work at www.computerblueart.com
Special Thanks to Quartersnacks for putting it on our radar.
Rant, comment or bitch on our Facebook
Let us spam you on Twitter