AN INTERVIEW WITH THE KID WHO FILMS SKATING ON HIS LAPTOP 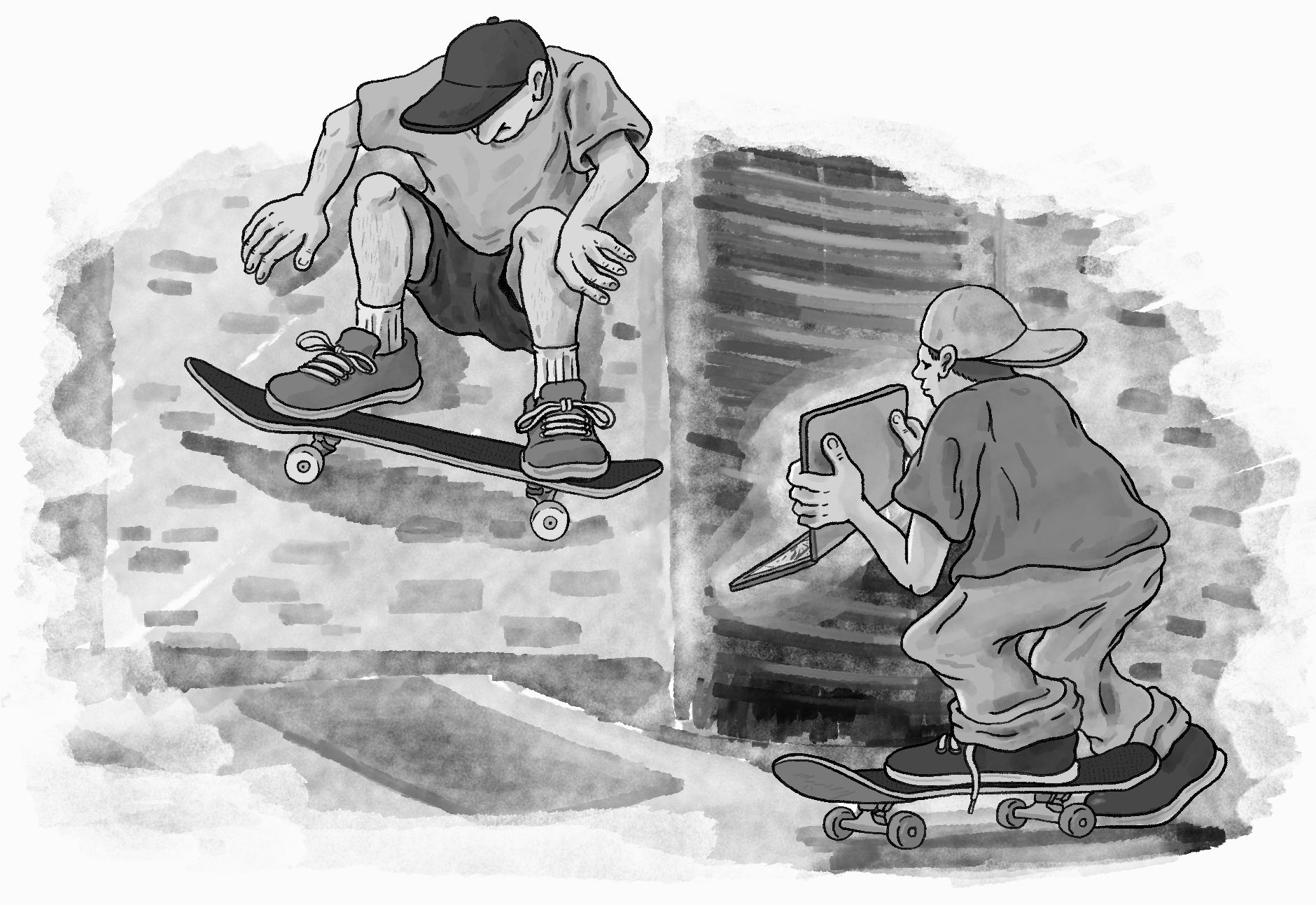 Being incredibly resourceful is one of the most important skills that skateboarding teaches you. We’ve all patched our torn-up shoes with duct tape, skated hand-me-down boards until both ends were razor sharp, and used the extra laces that come with our shoes as makeshift belts — even if they make us look like we’re wearing thongs when we bend over.

Derek, aka @k2withgrabba, is a kid from NYC who’s following in that tradition, doing whatever he can to stack clips with his homies around the city. He doesn’t have access to the typical VX1000 or HPX170 cameras, but he wasn’t going to let that stop his creative output.

He went out on a limb and started filming his friends with his school-issued Chromebook with a fisheye glued to the webcam, and has since been spotted holding the contraption in the air at contests like that boombox scene from Say Anything.

The footage might not look the sharpest or steadiest, but at least Derek is thinking outside the box, and not giving up just because he doesn’t have the fanciest gear money can buy. Young creatives, take notes.

Why the laptop?
Honestly, it was after Kyota [Umeki] dropped The iPod Video. At first, I was like, “What the fuck? There’s no way this was filmed on an iPod.” But they just glued a fisheye lens on there.

Then, my friend and I remembered some funny ass video of a fight that someone was recording on a Chromebook in the background. So he was like, “Yo if you throw a fisheye on the Chromebook that would probably be valid.” I took the school computer I had at the time, and I just threw an eBay ass fish lens on it and I was like damn, this shit is cool. I would buy the fisheyes from eBay or go to Five Below and rack them.

I’ve filmed on three different Chromebooks. I broke one laptop that the school gave me to do my work, and then the second time some girl had left hers out and I was like, “Damn, I’m really desperate and I want to film,” so I just snatched that shit from her. Right now, I’m using a loaner that I got from school. I’m afraid if they find out they’re going to hit me with some crazy ass charges, like some $2,000 fine or some shit.

“I took the school computer I had at the time, and I just threw an eBay ass fish lens on it.”

Who did laptop filming first, you or Gonz?
Not gonna hold you, Gonz did it first. Mad people were like “Who the fuck is this kid? He’s just ripping off Gonz,” but Gonz isn’t doing it how I’m doing it. He didn’t steal his laptop from his school. Just joking, I love him. He’s already done basically everything, so it doesn’t even matter. He’s basically Soulja Boy. 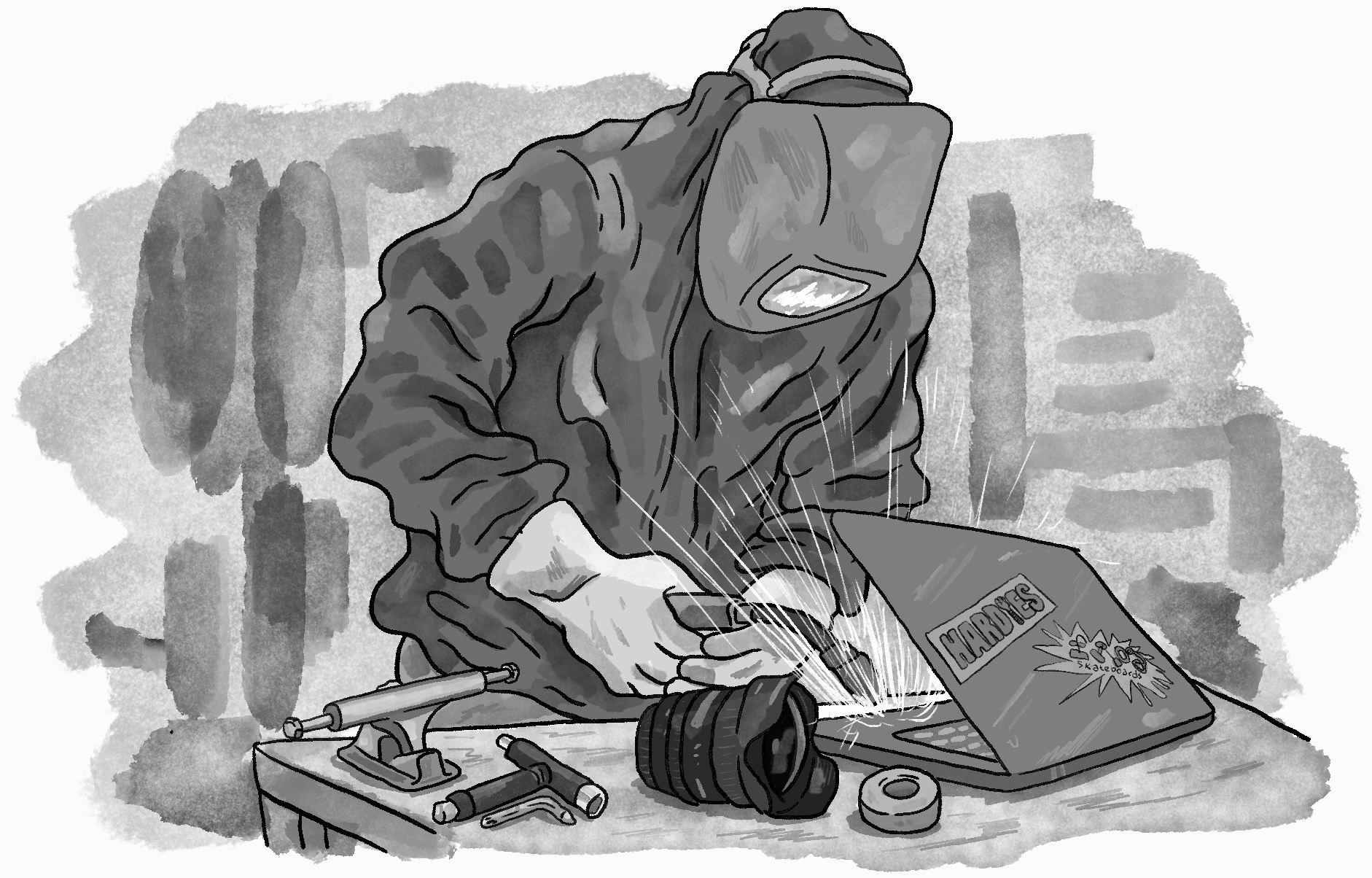 We’ve seen you filming at contests too. Do you ever get self conscious filming with something so different?
Not really, kinda just because I really don’t listen to what anyone says at the contests. I always have headphones in, it gets boring. But when somebody does say something, it’s normally along the lines of, “That’s so sick!.”

Are we going to get a full-length laptop video?
Yeah, I’m working on a full-length with my friends. I’m trying to figure out who I want in it and who wants to be in it. My homies skate well and I want to show the world what we’re capable of. Also, this just stems from the fact that cameras are expensive. Fisheyes, tapes or cards, getting everything onto the computer. I wouldn’t be able to do that. It’s a lot of work.

So you cut out the middle man. Does everything save right to the desktop?
Yeah, it saves to my computer, then I have a Google Drive folder called “Clips” and I just drag them from the desktop to the Drive. After that, I download them on my phone and edit the video on my phone. It’s annoying when you have to export like 10 minutes of footage. You’re sitting there for an hour just for three usable clips.

Why not just film shit on your phone then?
Honestly, I just like the way the footage on the Chromebook looks. The phone doesn’t hit the same way. The laptop looks better. 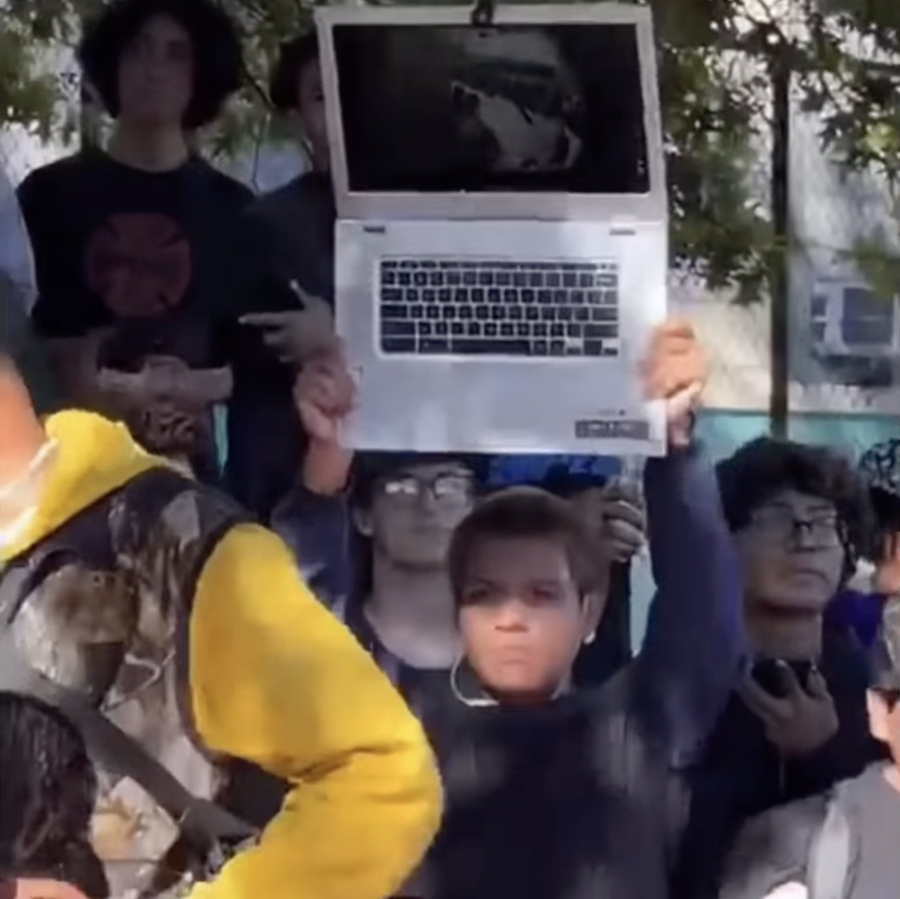 If you could afford an HPX170 camera would you?
If I had the resources to buy it I would most definitely do it. The Chromebook is heavy as shit and if you throw the Chromebook in an empty bookbag it’s going to weigh a few pounds. The HPX is heavy, but still, filming with the Chromebook is hard. Sometimes I just wish I had a stabilizer or something, like a handle. It does start to hurt after hours of filming.

Do you film lines with it too?
Yeah, actually, when the first video came out of me holding it, I was filming for this old group called Shyneboyz. There are a lot of videos of us all filmed with the Chromebook from last year. I just like to film single tricks on stair sets and stuff. That’s more my style with this thing. Most of the lines I’ve filmed haven’t come out the way I want them to look.

If the school knew you broke your school-issued laptop filming skating, do you think they’d be tight?
I’m pretty sure I would get in trouble. But at the same time, I’m very cool with a lot of the teachers. A lot of them would help me push the agenda that it was for creative purposes and there’s a small chance they would drop the punishment. But if I have a video of me doing school-inappropriate things on the laptop, they’re going to be really mad. Like, why is this little kid doing this crazy shit with our laptop?

I feel like it’s less about us, and more about making the school look bad. It would just start a whole problem. I don’t tell my teachers, I just show them a quick clip to show them what I did over the weekend, but not serious stuff.

What’s the normal reaction you get from people out in the streets when you’re filming?
People are usually like, “Who is this little ass kid filming on this laptop? This is funny.” Most people come by and tell me it’s dope and funny and different. That makes me want to film more. It’s hard to do something original. It’s incredibly hard because almost everything has been done. There’s not really a different style of editing or filming. Recently, people just use the Strobeck zoom thing and it’s a little bit too much zoom.

You gonna do the zoom with the laptop?
[Laughs] Not like that. It’s kind of crazy now though, almost everybody is doing it. Sometimes I don’t want to see just the bottom of the skater. That’s the worst. Sometimes there’s beautiful scenery too—like foreign videos—and they’re doing the Strobeck thing. You have so many beautiful places in your video and you’re not using that to your advantage, you’re just showing us a close-up of someone’s lower half. Nah.

“Most people come by and tell me it’s dope and funny and different.
That makes me want to film more.”

What did Gary Rogers say about the computer?
He said it looked like I was filming a sex tape, and I thought about the Kim K shit instantly. But after that, he kept chatting to the crowd, “This little ass kid out here with a laptop, he original! Y’all are not going to be doing the same shit as him, you’re not on his shit!” I didn’t even know what was going on.

You ever going to step it up and get a MacBook?
Yeah, definitely. But a Mac is bread and I’m going to have to save up for a while. If it breaks I’m not going to be okay.