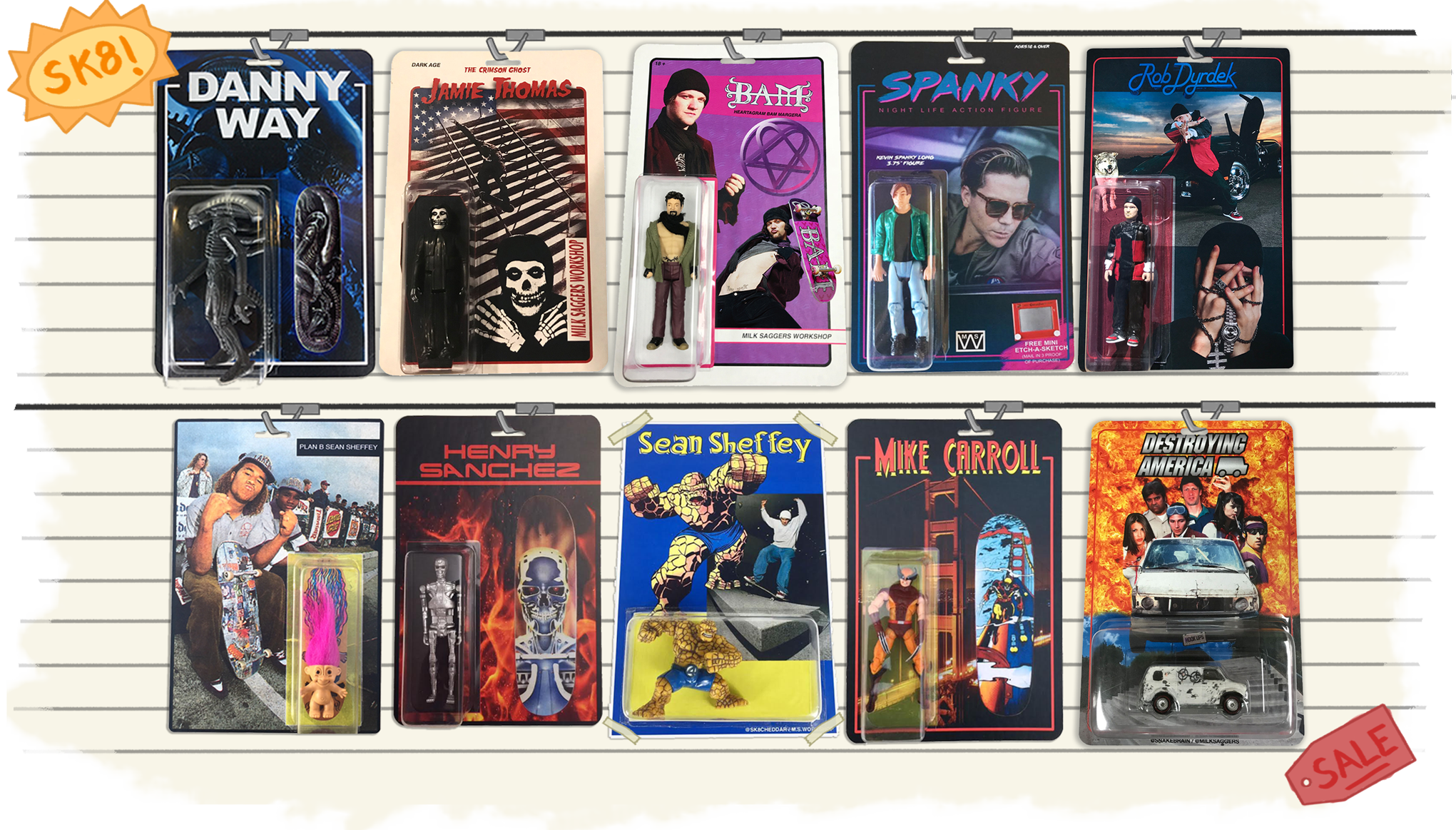 Two guys in California who started making hilarious skateboard action figures are the only ones doing it right these days. Under the name milksaggers, Cory Bosacki and Jacob Nichols take existing non-skate action figures and create custom packaging to turn them into replicas of skate icons and memorabilia. If you ever thought Spanky or Nora Vasconcellos would make for funny action figures, or always wanted to play with the tour van from Destroying America, then milksaggers might be your fucking jam.

As their absurd name makes clear, they’re not out to make “totally rad” toys for the masses. Milksaggers is strictly by skate nerds for skate nerds.

How would you describe what you do at @milksaggers?
Cory: Jake and I were looking on Instagram and we saw a bunch of guys outside the skateboard industry making bootleg action figures. We were looking at each other and the creative juices started flowing to make some skateboarder figures.

Do you want to sell them? How much for?
Cory: We’re interested in selling them. But they’re not gonna be Toys-R-Us prices ’cause it takes a while to do them. Eric from Chromeball Incident DM’d me about the Sean Sheffey Troll toy because I guess he’s loved Trolls since he was in junior high. He’s like, “I feel really weird sliding a DM to you about Trolls but I wanna see if you’ll make me one of those Troll figures.”

I’ve gotten a couple people wanting the Terminator Henry Sanchez and I’ve been selling them for $50. Jacob’s doing more customized figures so if I was him I’d sell them for closer to $75 or $80, but the ones I do are already existing toys so as long as I can get that toy in abundance it’s just a matter of fabricating the packaging. But we’re not doing it for money. We would be happy doing this if we didn’t sell a single one. We have them all up on the wall in our office. We love it. 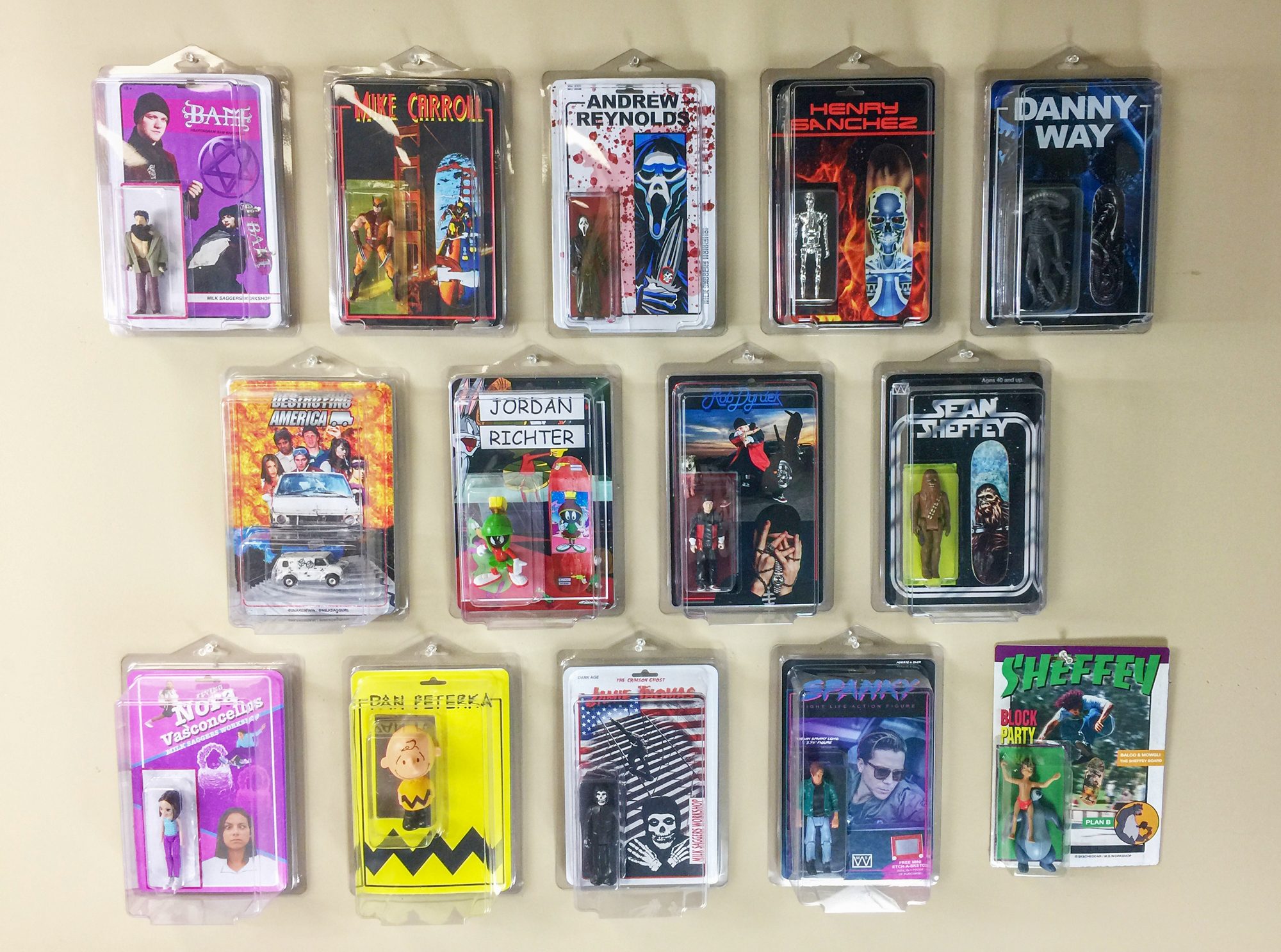 What’s the deal with your Instagram name, @milksaggers?
Cory: We were stuck in traffic on the way to L.A. and Jake joked that we should go to a strip club cause the traffic was bad, and I said, “No dude, I don’t want to see no milk saggers.” When I drink caffeine I start saying dumb stuff. Then Jake came over to my house and we were messing around with prototypes and I said I should put “milksaggers workshop” on the package. It was a joke and sometimes jokes just stick.

I’d never heard the term ‘milksaggers’ before. You just thought it up on the spot?
Jacob: He said it in like seconds. Without thinking he just said it. 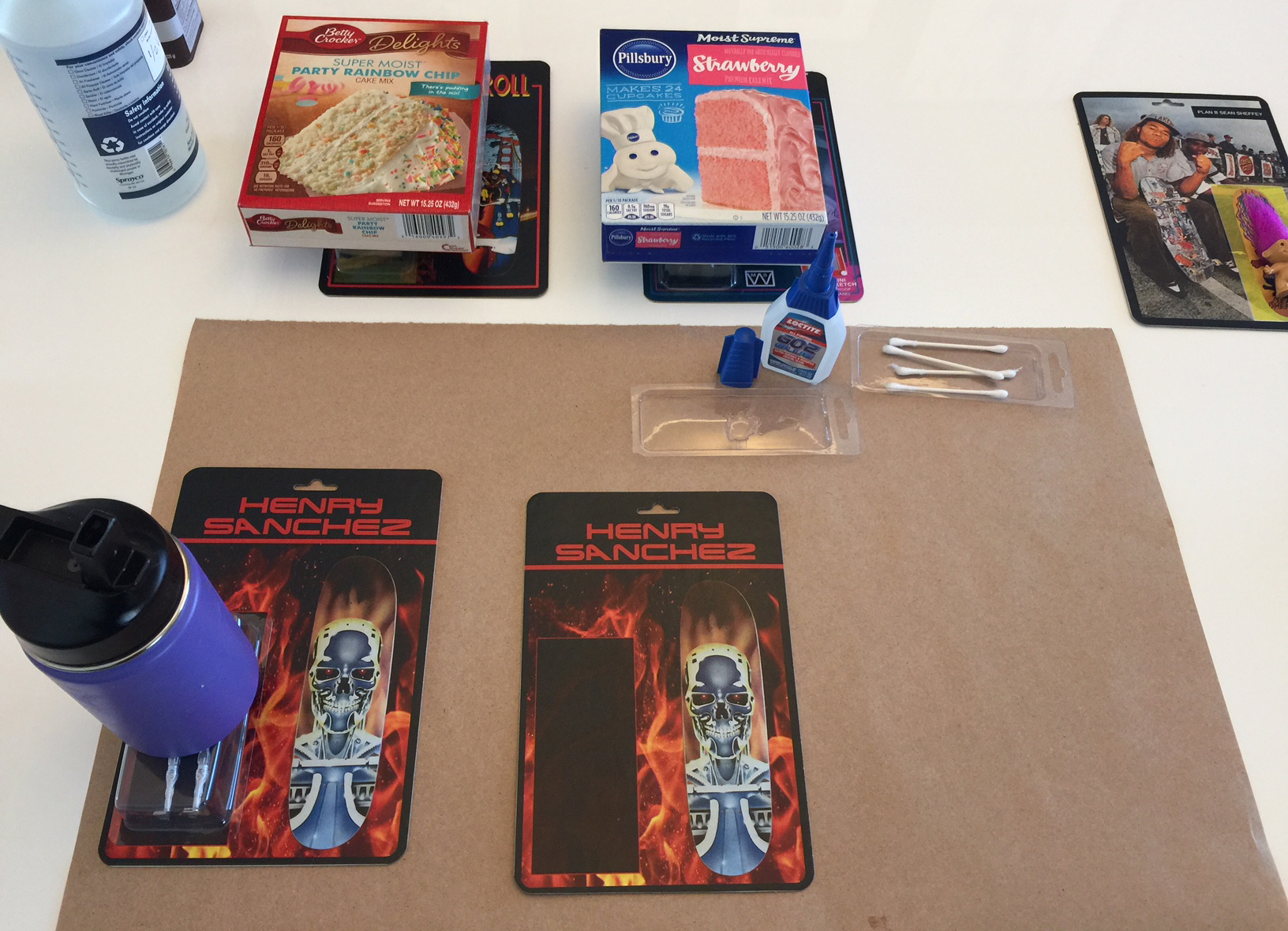 What were your first skateboard figure ideas?
Jacob: The Destroying America van was the first one for me because I thought it would be easy to get a van and make it look shitty.

Cory:I’m really into old skateboard decks so I’m taking existing figures and mashing them up with early ’90s pop culture reference decks and putting them together in a package.

Where did the Rob Dyrdek action figure come from?
Jacob: It was a Breaking Bad Jesse figure. Usually I base them off what they’re wearing. Jesse was wearing these crazy ’90s looking clothes with a beanie and Cory noticed he looked like Rob Dyrdek. I found that photo [of Rob] from an old Transworld interview he did and I realized I could paint him all black, paint his jacket red, paint his beanie black, and it looks pretty similar to the photo.

Have you seen other skateboarding action figures?
Cory: I found a Street League Nyjah and the Street League Mikey Taylor and they’re really goofy. Their arms are sticking straight out like they’re holding buckets of water. I remember Rick Howard had an action figure a long time ago.

Gino Iannucci had an action figure, it was super weird. It was a collabo between Freshjive and a toy company but it was called the Seditionist. It’s Gino with this removable hockey mask and all these weapons, then a pair of black and grey Nikes. They did a Mike York too, so there’s been a little bit of history of them. 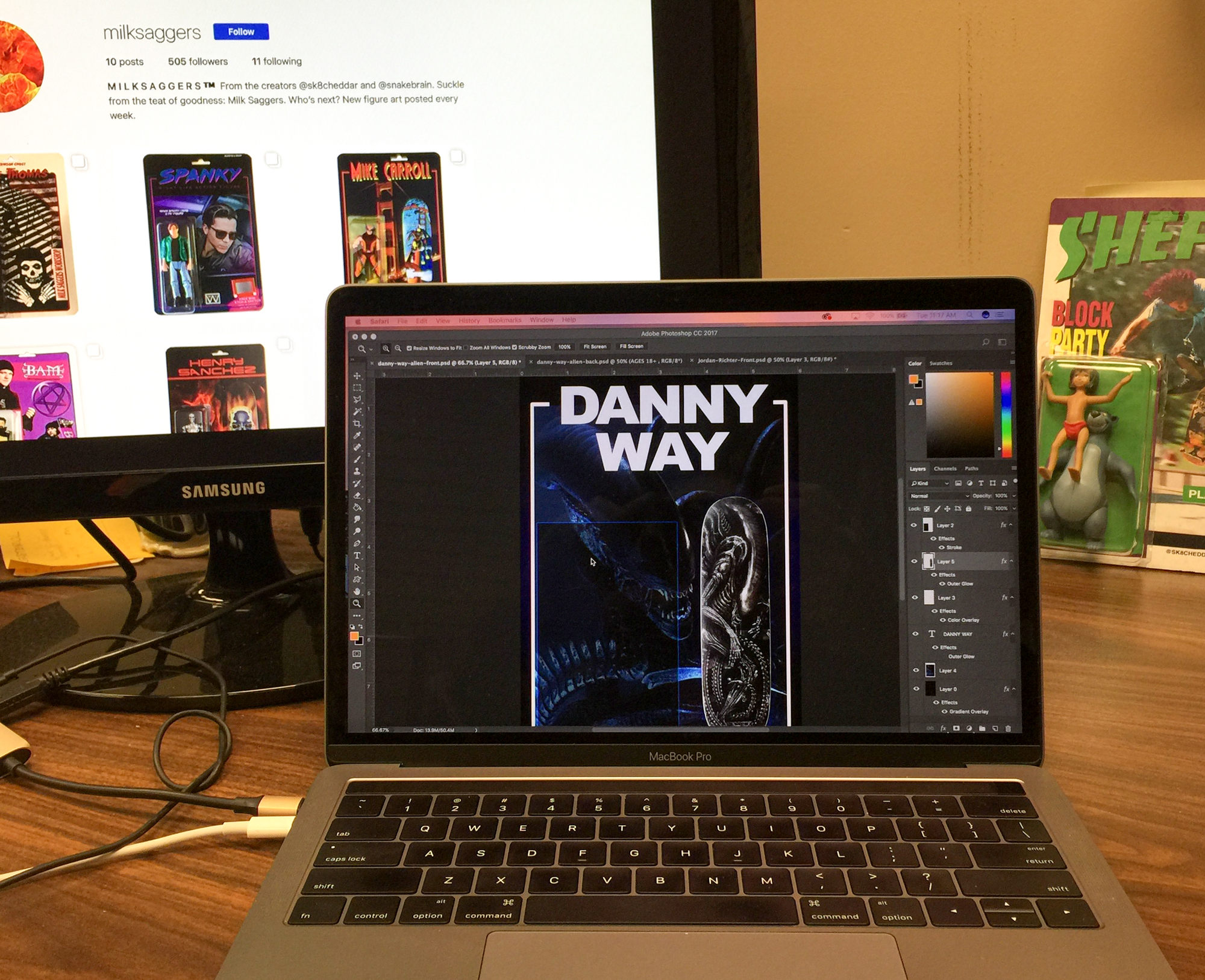 What kind of responses have you gotten from people you’ve made figures of?
Cory: Spanky “liked” his toy this morning. Sean Sheffey is on Instagram all the time and he “liked” all three of the ones I made of him. Henry Sanchez chimed in about his Terminator. But, Rob and Bam haven’t responded. I think a lot of people who are into action figures and skating kind of really like them. It’s a broad spectrum of people that can relate to any one of these individual figures. Anyone that doesn’t skate can recognize one of these things from somewhere. Even though they don’t know that Mike Carrol had a Plan B deck with Wolverine on it they know who Wolverine is and then that piques their interest.

So no one’s sued you for using their image?
Cory: Not yet.

Jacob: We’re not mass producing them either. It’s like an art project so it’d be kind of weird if someone tried to sue us.

Cory: I’m selling a few here and there but it would cost more for a lawyer to send out a cease and desist letter than the royalties I could make on their image. It’s kind of ironic that most of these early ’90s skate graphics are ripoffs of somebody else’s artwork anyway. 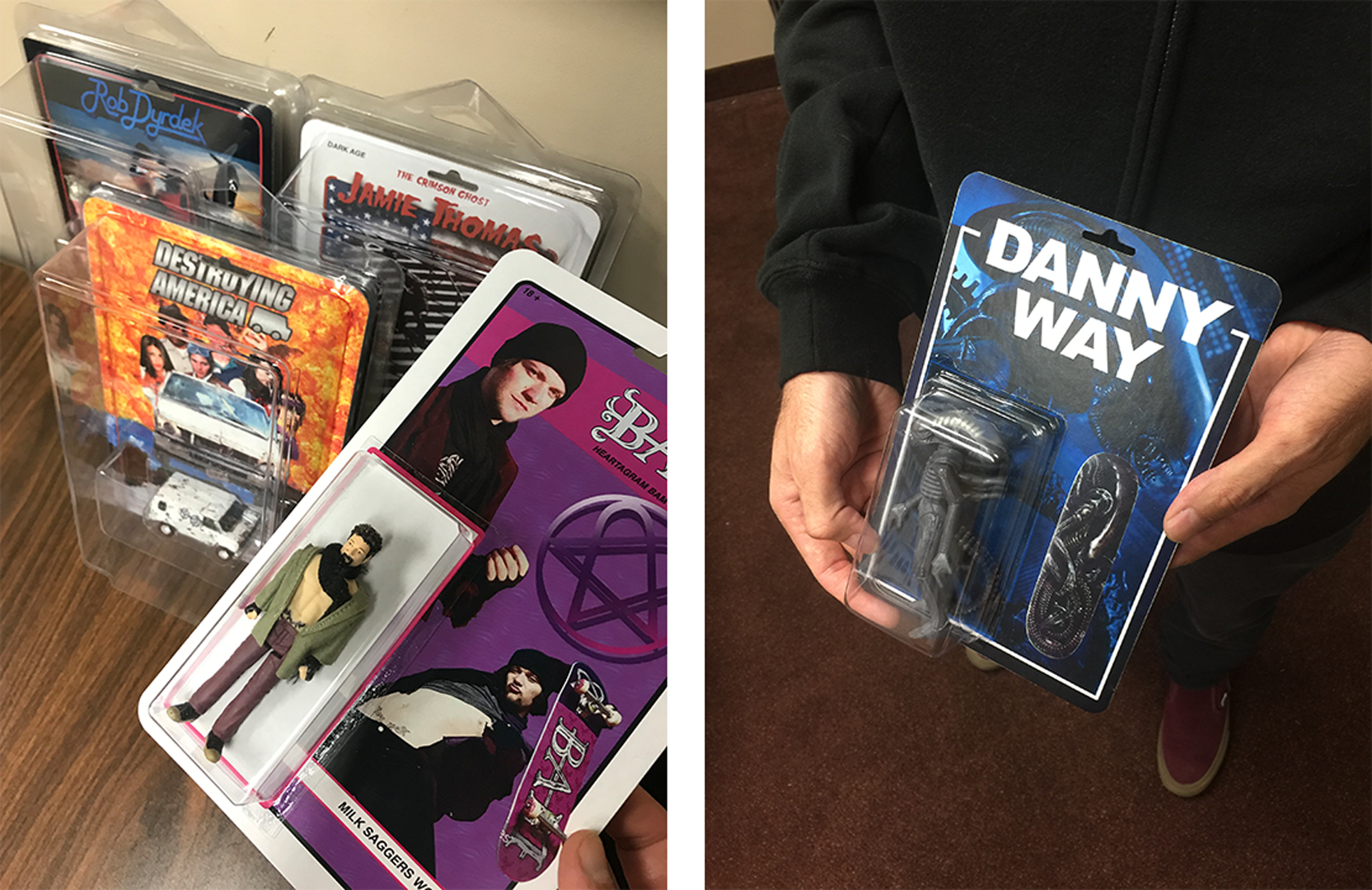 Would you guys ever want to make a set of figures for a skate brand?
Jacob: We’ve talked about that. Once we get more comfortable creating the whole package we could just do series, like a series of Baker dudes. What’s cool is you could make figures from different times. So you could do Baker in the early 2000s and then you could do Baker now.

Cory: We were talking about Baker because I really want to do a Jim Greco one. Jim Greco has had so many crazy outfits and personas in the past I think that would be a really fun one to do. We just gotta get more comfortable with creating. There’s a whole subculture of dudes who create their own figures from resin and plastic and we’re not even close to that. If we get that far I think we could make each one look a lot like the skaters, but let’s see how far we get down this rabbit hole.

What other figures or decks do you want to make?
Cory: There’s an old Jordan Richter Blind deck. It’s a diagram about how to put on a condom and it was a controversial board in the early ’90s. We could make customized condom wrappers under the bubble. I’m not a perverted guy, that’s just one that popped into my head. Or this Danny Way deck from the early ’90s where he’s shooting a shotgun into this mannequin head. Spike Jonze shot the photo and it’s got a collage of shotgun bullets all over the board. I was thinking about creating a backing card with that and throwing some shotgun shells under the bubble.