The easiest way to tell if a brand is washed up is to see how tight-knit the crew of skaters are.

Do they still hang out like a crew or is their newest video strung together by 10 different filmers with little direction? Aging brands on the decline can try to fake the funk – doing corny shit like throwing forced high five and hugging clips into their videos to create the illusion of a tribe – but it rarely works in the long term.

WKND’s latest video, Street Fighter 2, is a good example of how a brand can grow well beyond what it started out as and still maintain that authentic family vibe. Even when WKND brought on bigger-named riders like Tom Karangelov and Karsten Kleppan, the original magic wasn’t hindered. If anything Tom K’s acting kind of made it feel like he’s been a part of WKND since the beginning.

We talked with Grant Yansura and Trevor Thompson, WKND’s sales manager, to learn more about the inner workings of WKND, and what went into Street Fighter 2.

As a team, you film a lot of skits. Who would you say is the best and worst actor out of the crew?
Grant: It was Jordan Taylor, however, Filip Almqvist was added to the roster and now Gordo ain’t lookin’ untouchable anymore. Nikolai Piombo has so much potential but shoots take too long and he gets too high. He’s not the worst but he hasn’t shined yet as he could.

Trevor: Obviously Jordan, but Filip is so good it’s kind of scary. Makes me wonder what’s going on in his head. He is like a legitimate master of all types of accents and picks up on these little details. Even when he’s just telling a story he can be really animated and command your attention without being over the top. I hate doing skits and am extremely uncomfortable talking on camera, so I’m gonna go ahead and say I’m the worst actor.

Trevor, I heard that on trips you have a whole computer-work setup that you bring with you. Is that true? Are you always on that grind?
G: [Laughs] I’ve seen it a couple of times. Working on trips is tough. Responding to emails in between tries…

T: That is 100% true. I always have to have my laptop just so I don’t get too far behind. I try to put work on hold when we’re on trips, but a lot of the time I’m working in the morning before we leave to skate and then till like 2 a.m. after we get back for the day and everyone is asleep…[laughs]

I think you’re talking about one time in particular. We were planning to go to SF/The Bay last year. I had something I absolutely couldn’t ignore, but I still wanted to go on the trip so I drove up separately and brought my whole computer monitor set up.

Did you guys sell a lot more boards in 2020/2021 due to pandemic?
G: The demand was there but it wasn’t easy to get a hold of boards. PS Stix was working as fast as they could but at the same time, they had to keep their staff safe. They were working in small shifts. What we were able to produce sold quickly.

T: I don’t know the exact numbers off the top of my head, but there was a pretty big bump in sales per season. As a direct result of that, we’re now dealing with a situation where almost all stores are overstocked. The hope is that through this year it evens out. More people skate than ever so I’m curious to see what the new ‘normal’ becomes for all of us.

How much money do y’all make a year? Are you millionaires yet?
G: Heck no. I wonder if people think that [laughs].

T: I’m working on it. 2022 is the year we make it big. We actually need Jenkem to do another in-depth article about how much money companies/shops actually make off of hard goods.

Can you two walk me behind the marketing decision to turn a 35-year-old pro?
G: Trying to get the boomer crowd fired up.

T: Calling it a ‘marketing decision’ implies that this was part of some master plan. You’re giving us too much credit, we are not that calculated. Andrew [Considine] is the best, he busted his ass, and we all love an underdog so it made sense to us.

Do you think he could pass for 20?
G: I’m sure some people out there will take away from that caption that he’s 20. I used to believe everything I saw in skate videos.

Who requested you reference him as a 20-year-old in the vid?
G: Our marketing team thought it would be best. 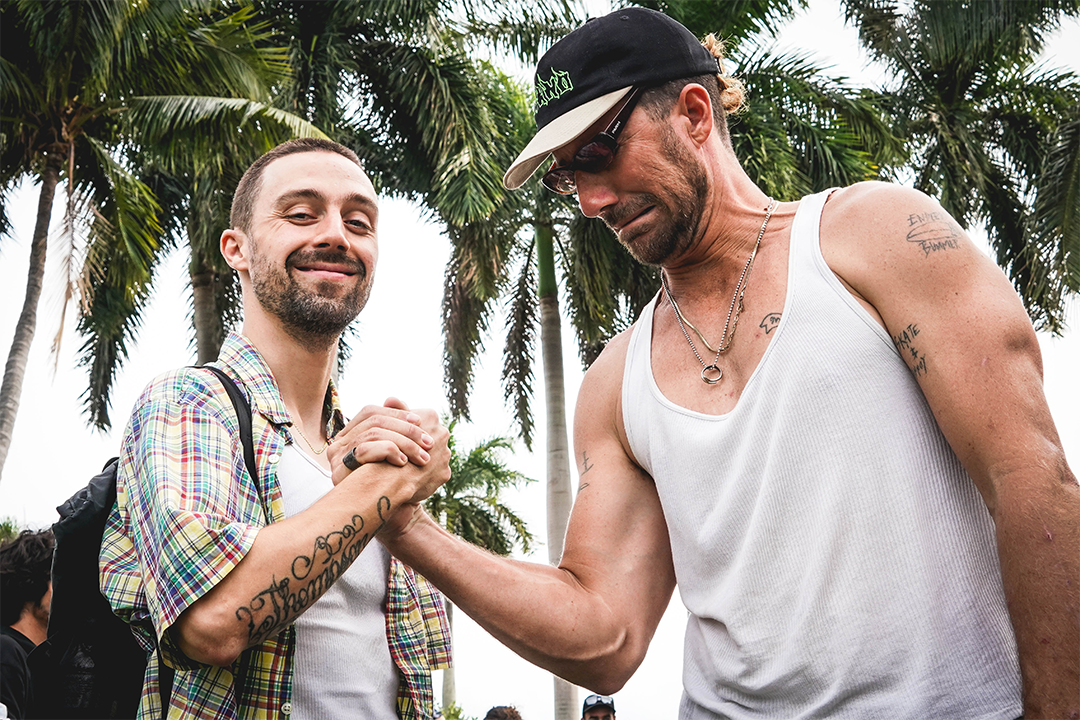 If the WKND team were Street Fighter characters, who would be your go-to character?
G: I’m a poser, I’m not that familiar with the game. I came up with this theme based on one 16mm shot I had of Andrew and Tom [Karangelov] in a AirBnB playing a similar game. When I’ve been scanning the internet for references I see this one green goblin homie that looks pretty buck. I also noticed one of the characters is named T. Hawk.

T: Andrew is the obvious choice right? Andrew or Tom… Tom would be the wild card choice because he’s secretly extremely buff. Soft-spoken and buff.

What would their attack move be?
G: Probably talk to you about Bitcoin while the kids spray Modelo in your eyes.

T: Andrew would have psychoanalysis. Tom would use The way of the Peaceful Warrior. Push when they pull/pull when they push…

“earning a living through skateboarding in any way is a huge privilege and I have no issue getting in where I fit in.”

T: I was never going to be a ‘career skater’ obviously. I think I’ve said it before, but doing this for work just allows me the freedom to still skate when I can, and be involved with something I actually like doing. Not that I’m passionate about sales, but earning a living through skateboarding in any way is a huge privilege and I have no issue getting in where I fit in. The negative side is that because a lot is on me, and I care so much, I’m constantly worried I will fuck something up and blow this whole thing for all of us.

Trevor, have you ever got mad at Grant and told him he’s giving you Jamie Thomas vibes?
T: Yes, I’ve definitely gotten mad at Grant haha. None of us give off The Chief type energy. I can be pretty intense, so if anything it’s the other way around. We find a way to make it work, or maybe they just find a way to tune me out.

Grant, what’s the worst part of being the boss?
G: [laughs] It’s hard to say no to your friends but sometimes ya gotta for the big picture. I think Trevor would like it if I was more Jamie Thomas energy. For the record, Tom K says Jamie Thomas is chill.

Is it hard to get in the mindset to go film and land tricks after sitting in an office at a desk all day?
G: You’ll have to ask Trevor. Trevor’s warm-up is insane [laughs]. He’s got all the gadgets. Tell ‘em, Bone.

T: Recently I was trying a trick, and right before I popped I literally thought, “Oh shit I forgot to respond to (blank) about (blank)”. Something kind of sketchy happened, I got all freaked out, focused on my board, and immediately regretted it.

Physically, I’m in my 30s, I’ve been abusing my body in various ways for 25 years now and have had two knee surgeries, so it takes a bit of preparation to get the ol’ engine running. 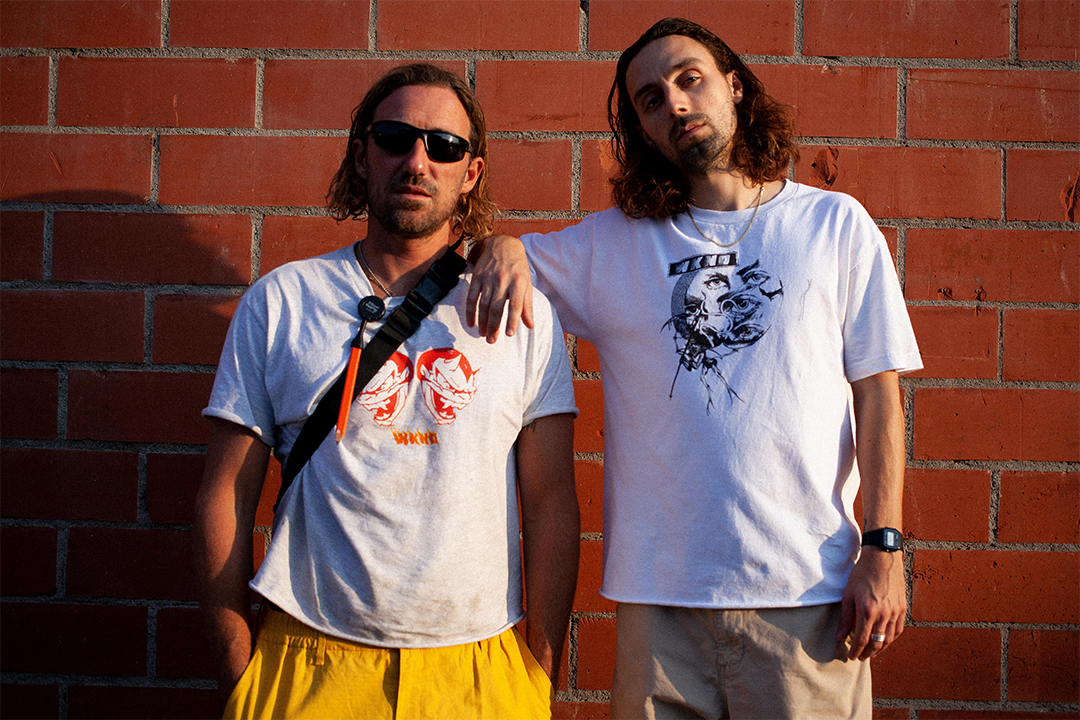 Does wheelbase even matter?
G: I honestly didn’t know what it was until like two years ago. People are all about it. Thank god that most of our team is picky about that so that I don’t have to pay attention.

T: I think it’s funny that there seem to be two completely different types of skaters. People who are super into their set-ups and all the little details, or like people who DO NOT even want to know.

I tend to overanalyze in general, so naturally, wheelbase does matter to me. Truth is that every little thing on your setup can affect your skating in some way, but at the end of the day it’s nothing but a piece of wood with some skates on it, man. So it’s really just a matter of if you care to pay attention or not.

Grant have you ever given yourself a pro board? When can we expect one in shops?
G: [laughs] I have not. I’m still too young.

T: I’m trying to figure out how to surprise Grant with a pro board without him knowing. I love when my friends go pro as fuck.