INTIMATE PHOTOS FROM THE EARLY DAYS OF NIKE SB 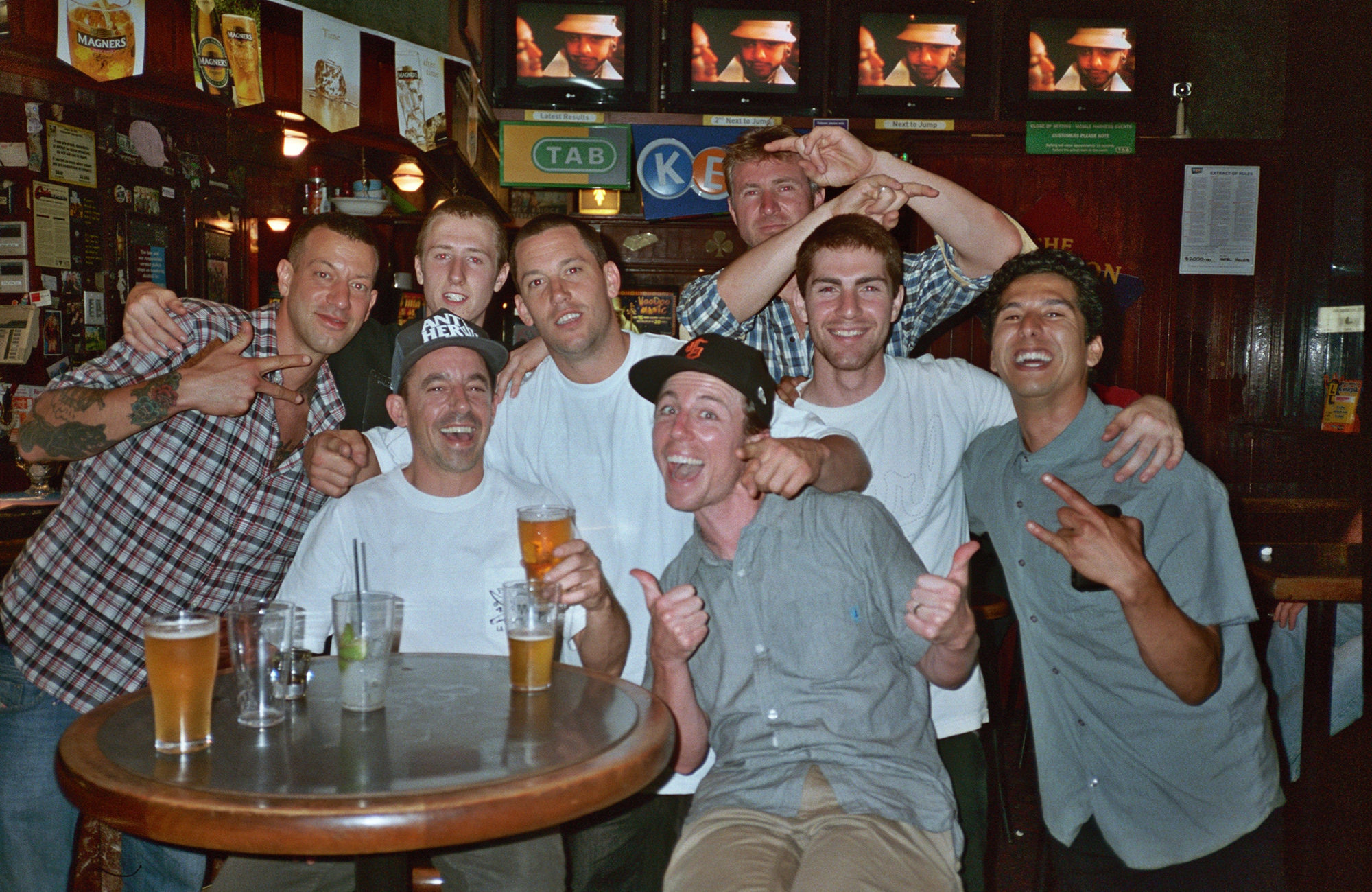 When Nike SB first hit the scene, success wasn’t instantaneous for the brand. The shoes weren’t quite on-trend, the team felt a little random, and they ran into some pushback from skaters. But in the early ’00s, things took a change, and the brand brought on legends and future legends and established itself as a skate powerhouse. Nike SB has built enough history at this point that it’s worth taking a look back at how it all started.

Hunter Muraira, the former team manager and later the global brand director of Nike SB, was a key architect in the formation of the team and the marketing of early Nike SB.

During his time on the road with the crew, Hunter had his Yashica T4 in hand to document his life and whatever was going on in his orbit. Hunter was happy to share some of his photos and offer some backstories on what the early days of Nike were really like. 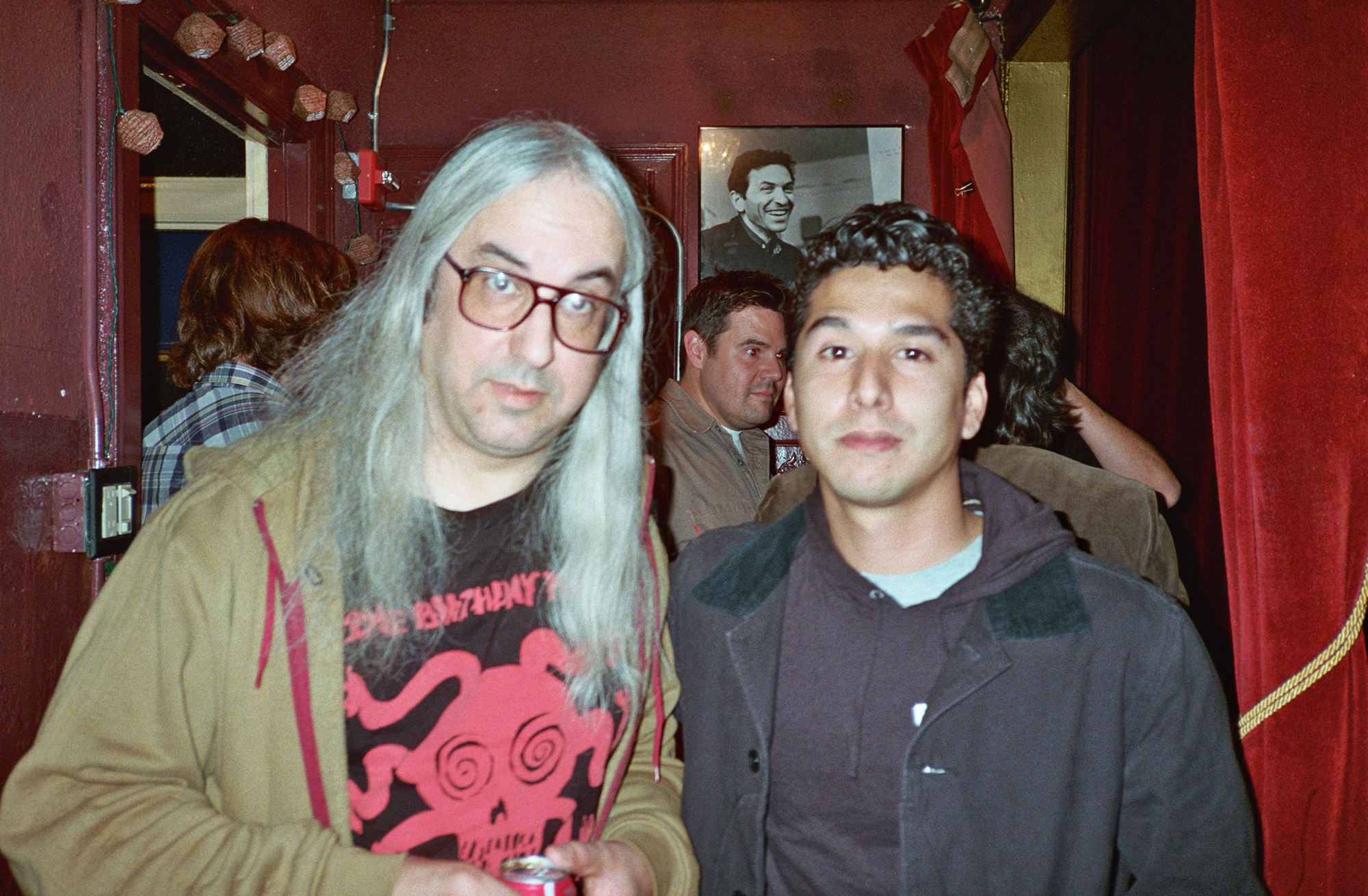 Omar [Salazar] is definitely one of the OGs of Nike SB. I’ve gotta remind people that he was one of the few with a signature shoe back then. This had to be 2010-ish at the Great American Music Hall in San Francisco.

Omar hit me up and was like, “Dude! Are you in San Francisco? Let’s kick it. I think I’ve got a line on Dinosaur Jr. tickets.” This was right around that time when he had his collab shoe out with Dinosaur Jr. Omar was definitely connected because of the Alien Workshop video, too.

He was just like, “I think we’ll get to meet J Mascis, dude.” Sure enough, we got a photo with him. When this photo came out I was geeking because it also captured Frank Sinatra in the background.

The partnership between Alien and Dinosaur Jr. is something that a lot of people might not have known about at the time. It’s been around for longer than a lot of people have been alive these days. 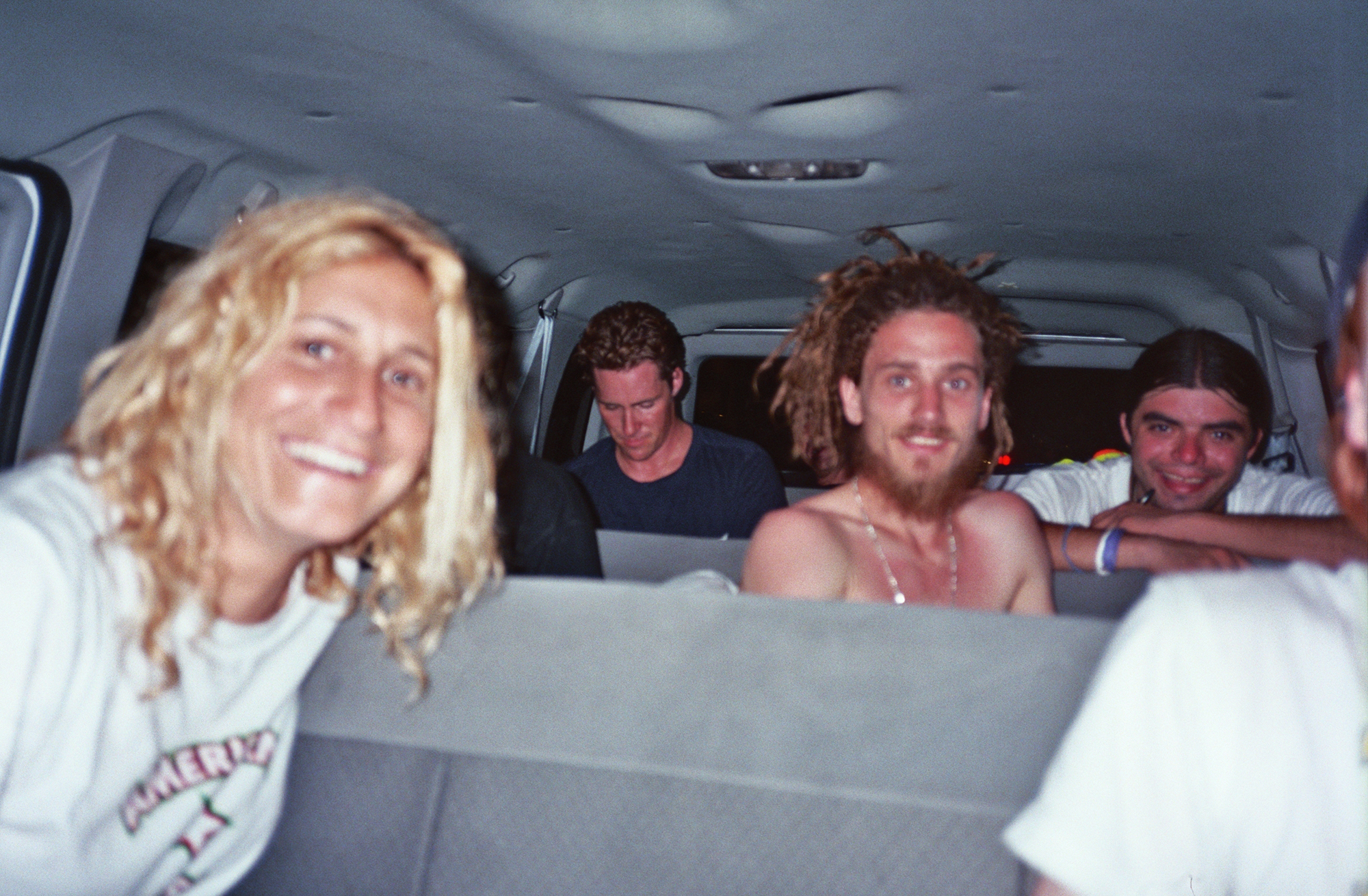 I took this photo because I didn’t think I’d be amongst such a motley crew again. We got a lot of the old crew, like Reese Forbes and Wieger [Van Wageningen], but we also brought in a lot of the new kids, which you see here with the photo of Lewis Marnell, Neckface, Reese, and Elissa Steamer. Lewis had a tremendous soul. He would be getting on everybody’s nerves but he just loved life. I could smell him through this photo. He was funky at that time. His energy level just didn’t stop. I’m just happy to see Neckface smiling too. 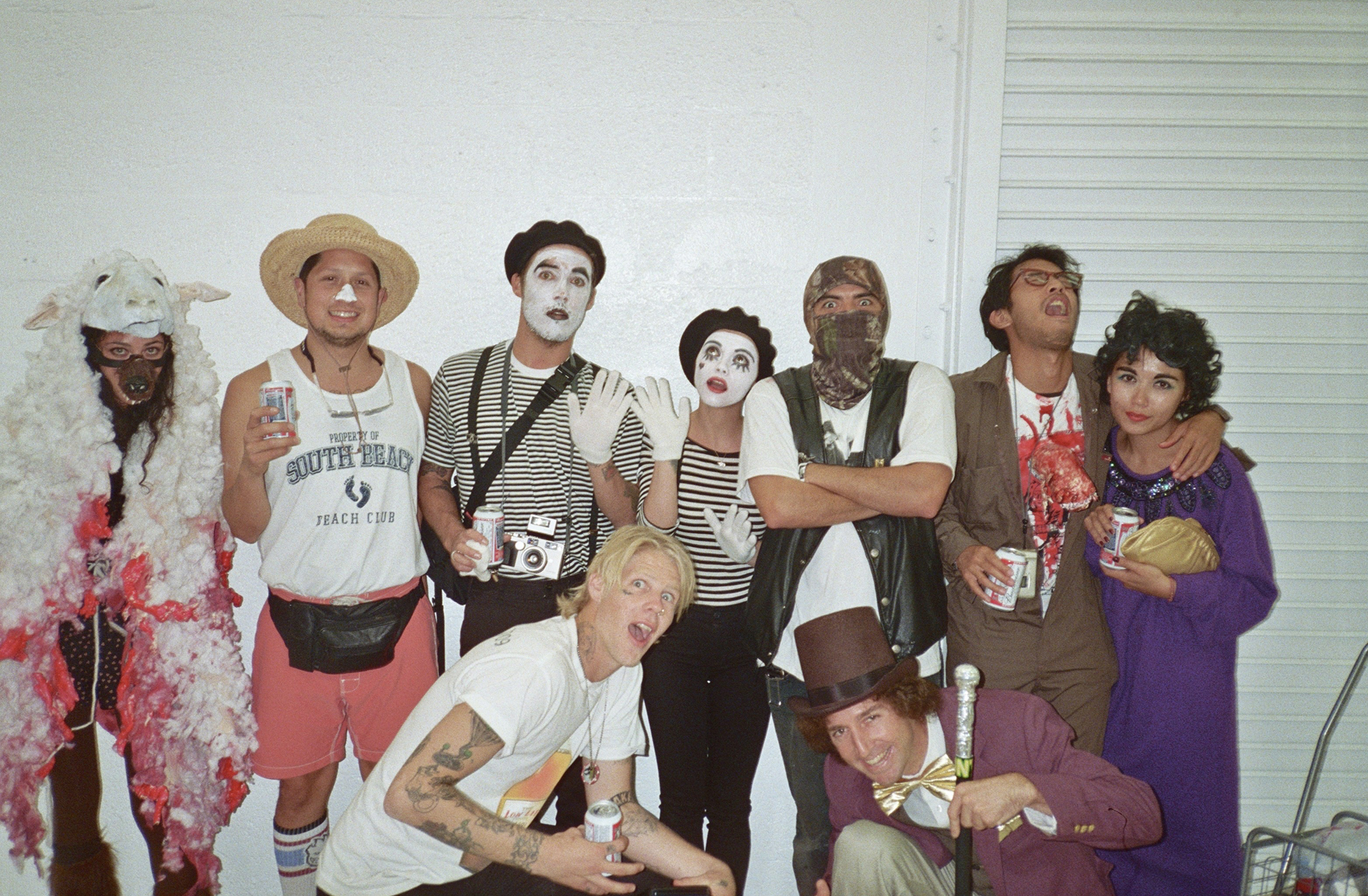 This was 2009 or 2010, in Miami for Neckface’s big show he had at the OHWOW Gallery. I didn’t realize the magnitude and I think that the cast of characters shows how big it was. I don’t want to say “network,” because everybody in this photo is his friend and they all have his back in one way or another.

It was a Halloween party, so Neck was trying to connect Halloween and his art. You had to walk through his haunted house that was actually produced and built by his family. If you didn’t know this, up until recently, his family would do a full-blown haunted house in Stockton. He brought 15 of his family members to Miami for this!

And of course, if it’s a costume party, Jerry [Hsu] isn’t going to take any shortcuts. Jerry is one of the most creative people I’ve ever met. Obviously skateboarding-wise, but just intellect and creativity-wise, dude is phenomenal. Jerry is in my top five favorite skaters. And on the far left, Meryl [Smith] is an incredible artists, as well. So this photo has some amazing artists in there. 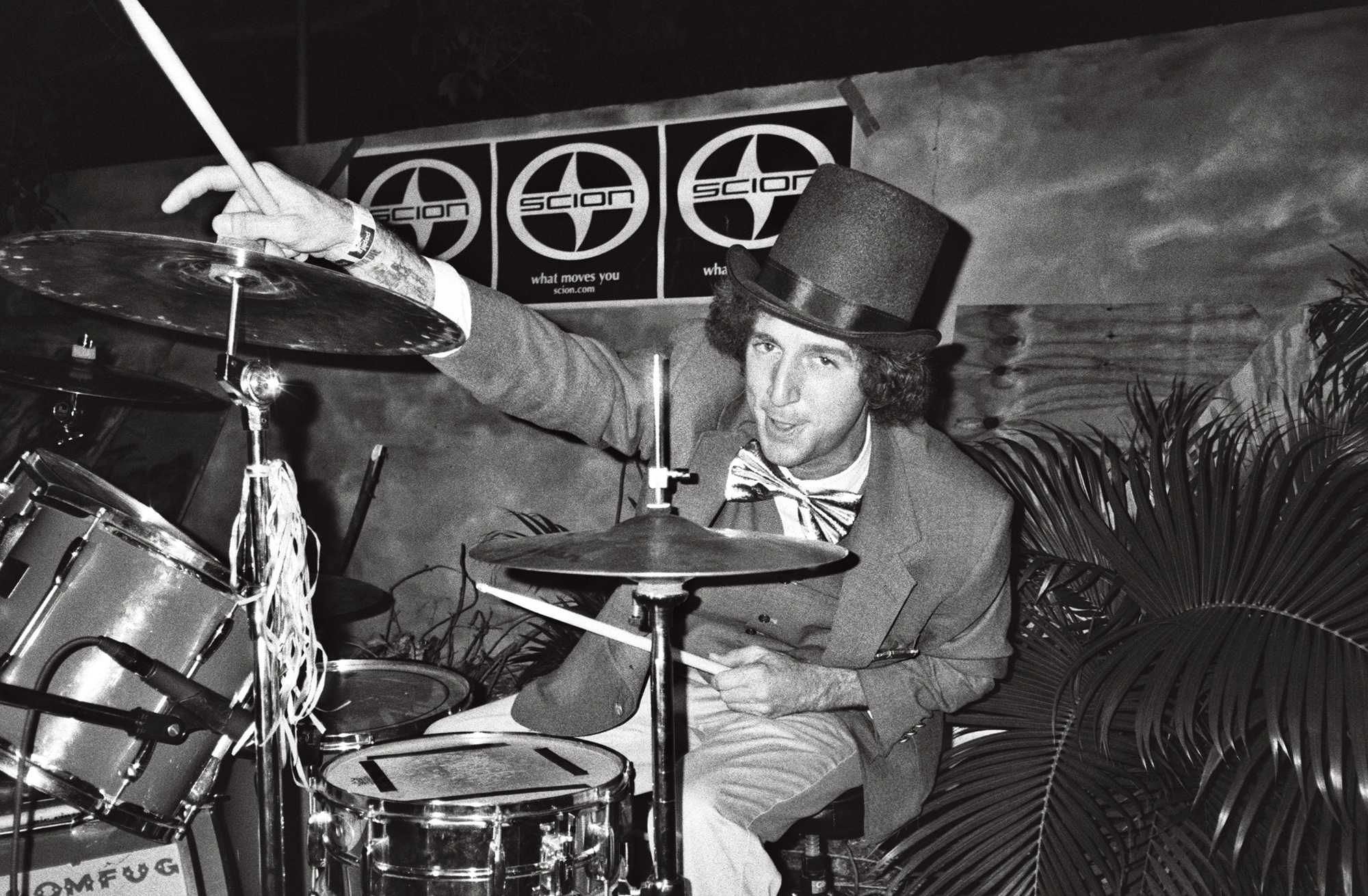 Beagle, dude. I love that everyone went all out and took the costume situation seriously. Beagle dressed up as Willy Wonka. His larger-than-life persona just comes through in the photo. 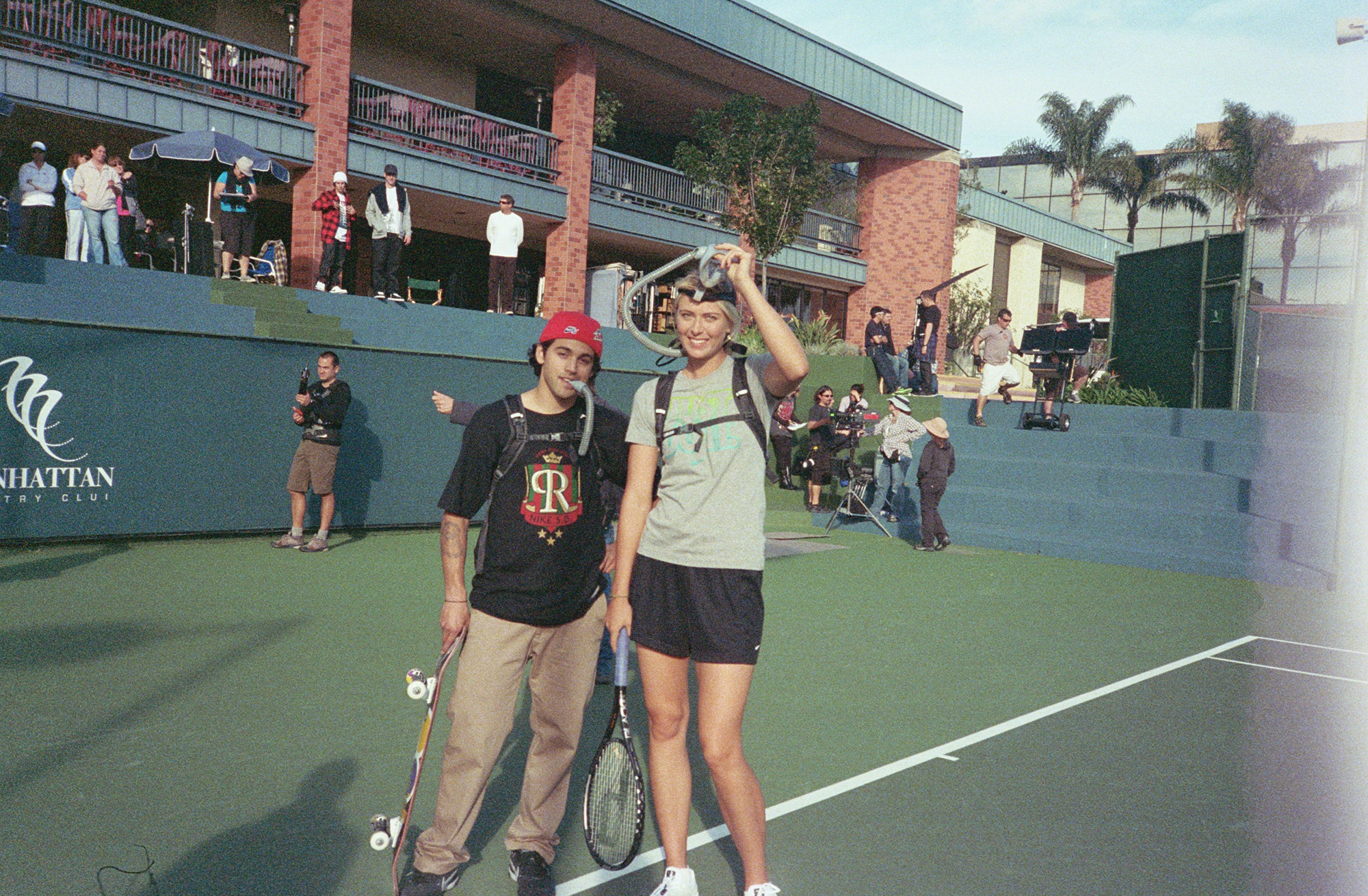 I’m going to forget the specific name of the commercial, but I think it was called “Rare Air.” It was trying to humanize the Nike Air technology and make it fun. I guess I’m not as big of a jock as I thought I was because I forgot her name. It might be Sharapova… Maria Sharapova!

This was a larger piece, not just a Nike SB piece, so Nike wanted a way for PRod to be easily recognized. That’s why you’ve got Paul in his PR T-shirt. Paul was always a good sport at those things, like, “Yeah, alright, I’ll put the costume on.” At that time, the co-branded sponsorship items were hot, so he had a Nike SB hat with the Mountain Dew logo on it. It was sewn on and shit.

He had these custom boards from Plan B, too. They were made just for contests and every sponsor had its visibility on it. I think even back in those days we might’ve had conversations about how big the SB logo needs to be compared to X Y and Z. I always thought of it like NASCAR. Paul was breaking boards doing high-impact stuff and jumping down shit, so instead of having to regrip and re-sticker everytime, he would have someone set it up for him. 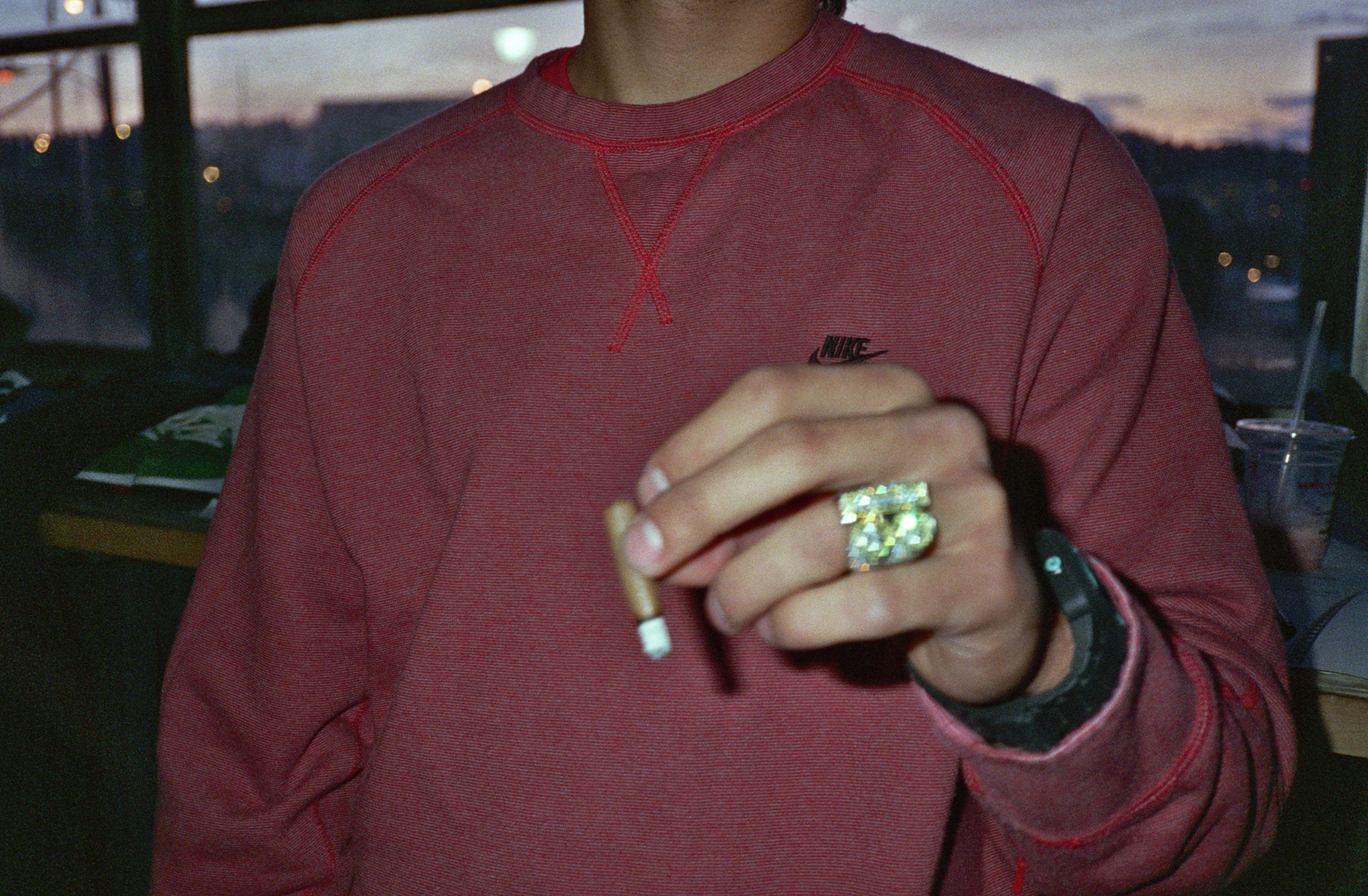 This might’ve been me trying to finesse and capture something cool. I was looking at all of the elements and maybe I was starting to catch onto what photographers anticipate.

I forget what products we were shooting for, but I just remember Paul [Rodriguez’s] Plan B ring. At the time, Paul would have all this insane stuff. I can only judge from the diamonds I’ve bought and put in my rings, which are very few, but I would say that ring costs at least 20K-30K. Nah I’m going to up it, dude, it’s PRod. It’s at least 100K! 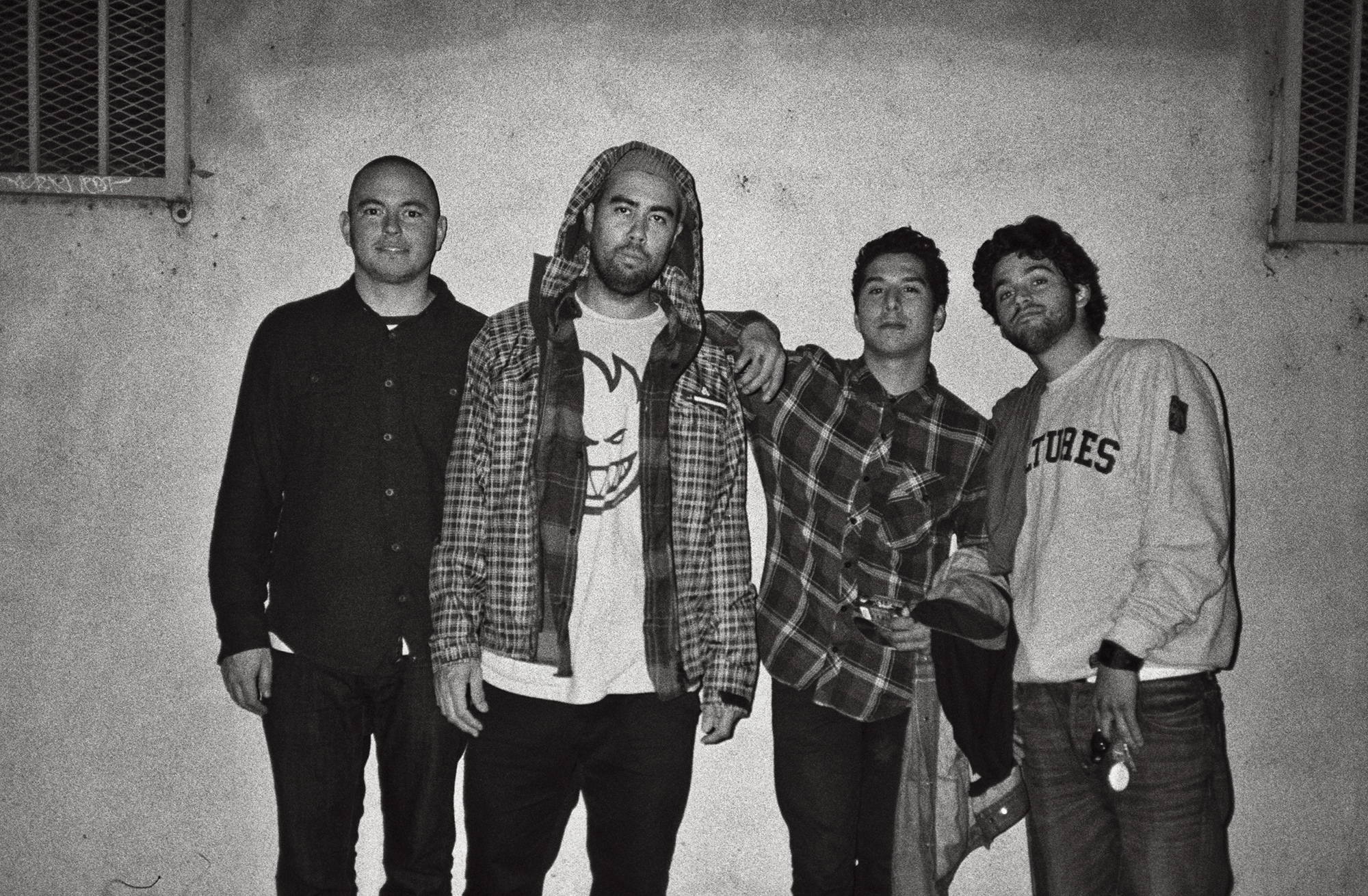 I’ll never forget the first time I met Eric [Koston] outside of a skating scenario. It was a Halloween 04’ or 05’ and me and some friends ended up at Eric’s house. We were waiting for a minute in his living room and I remember it being hella dark inside. He might have been moving because he didn’t have much furniture or maybe he was hella minimalist back then. I think I was anticipating some Less Than Zero shit.

Fun Fact: Eve of the Ruff Ryders was Eric’s neighbor! Would have been sick if she pulled up that night. 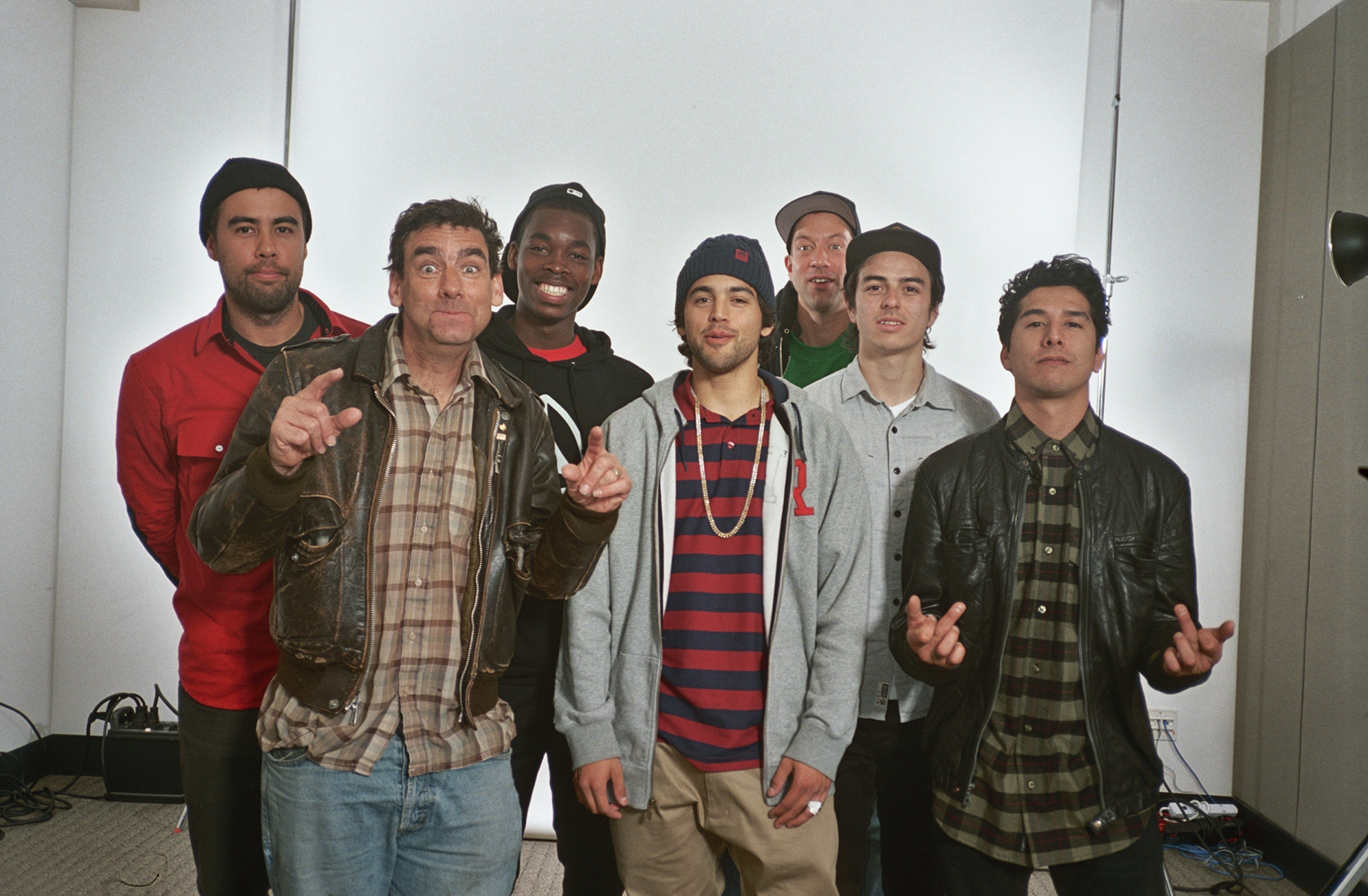 This next photo is of me taking advantage of Humphries‘ photo setup that he had. I want to say that we were shooting headshots for the SB website.

I told all the guys “Hey! Get together. I want to shoot something.” I remember Humphries saying, “Don’t bite my shit, dude.” I was like, “My shit is going to be tighter than yours.” I’ve known him for 20 years and we actually worked together at Savier before Nike, so I give Humphries more shit than he gives me. 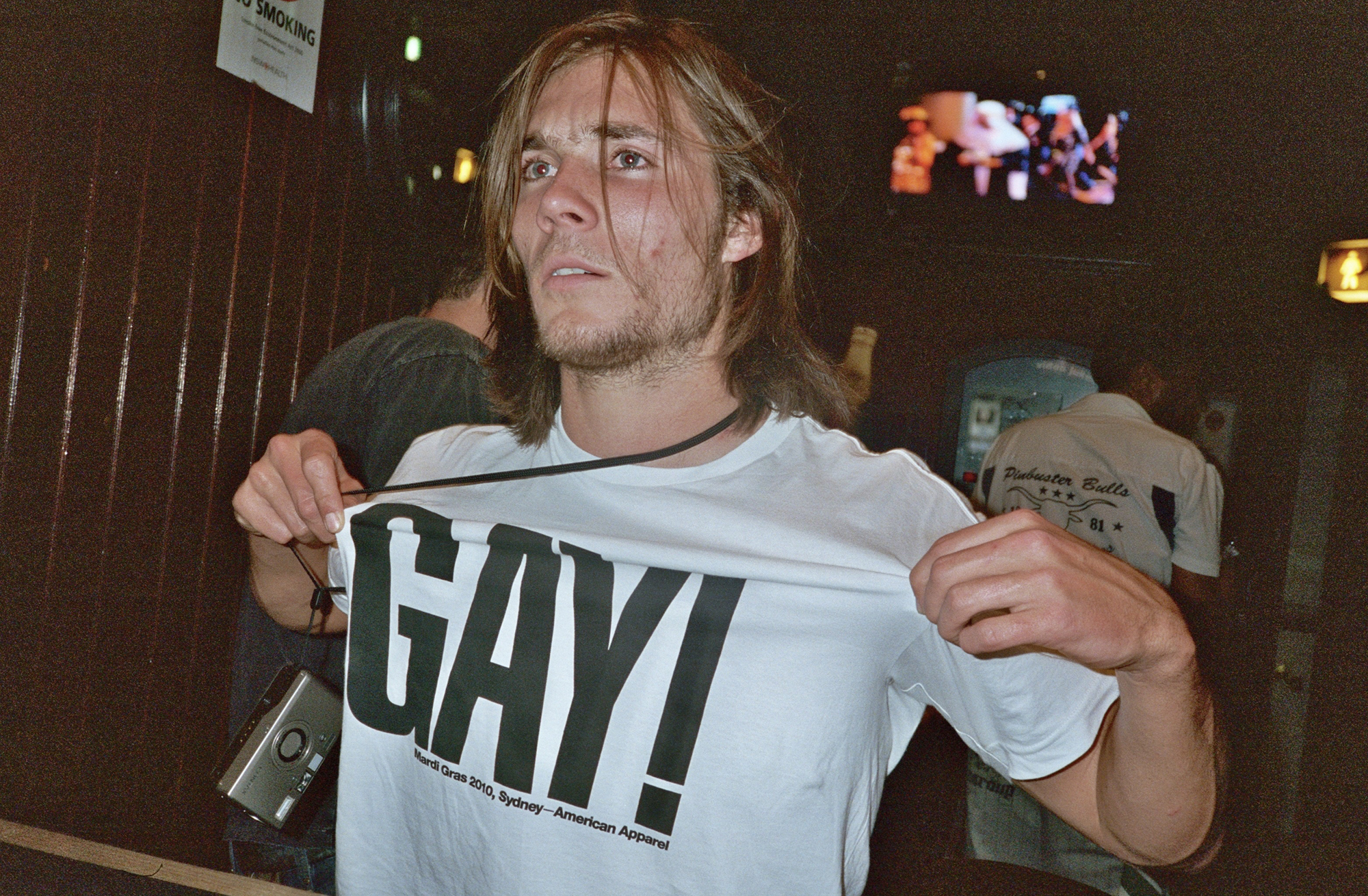 I’m pretty sure this was the trip that [Sean] Malto, Mike Mo [Capaldi], and Alex [Olson] all went pro for Girl. This photo was taken in Sydney, it was the gay pride parade and weekend there. This was one of those moments where Girl and SB came together. Sam Smyth [Girl’s TM] is one of my really good friends and I definitely look up to his approach to “talent management,” as he calls it. 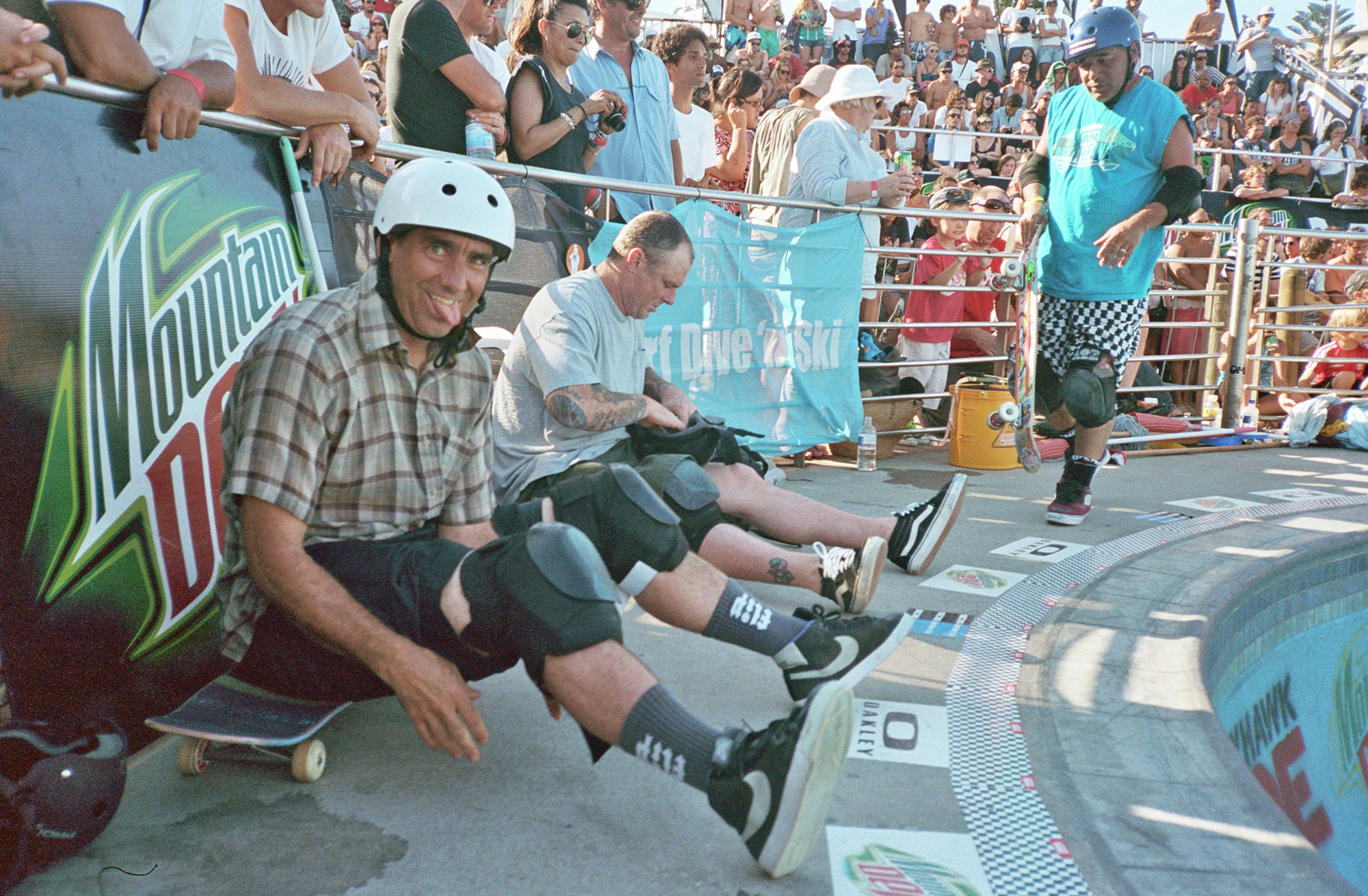 One of the perks of being the TM is I was able to get up close and be on the other side of the fence. I posted it on the anniversary of Grosso’s passing and Lance thanked me for posting these photos so I sent them to him. I’m still a kid at heart, and when someone like Lance recognizes your photos and says thank you, it’s like, wow. I’m lucky enough to be able to be a part of this and be the one taking the photo. 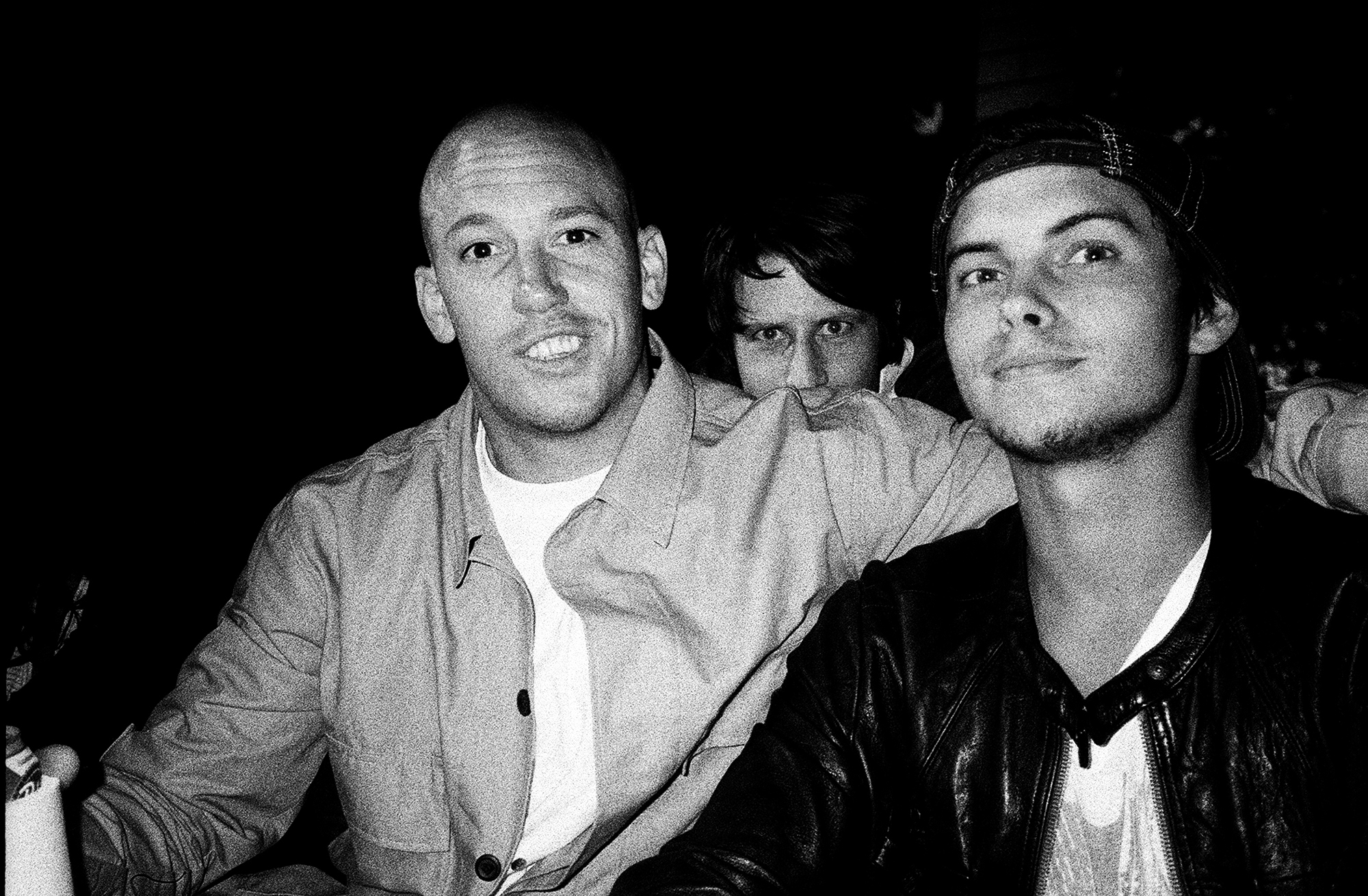 These three guys—Stefan, Biebel, and Dylan—were always together around this time.

This photo is from the Brian [Anderson] and Eric [Koston] shoe launch. Brian wanted this launch event to feel like something from the ’80s so there was a crazy vert ramp there. We had Bad Shit and Nickatina perform too, so it was just pure Bay music but in LA. 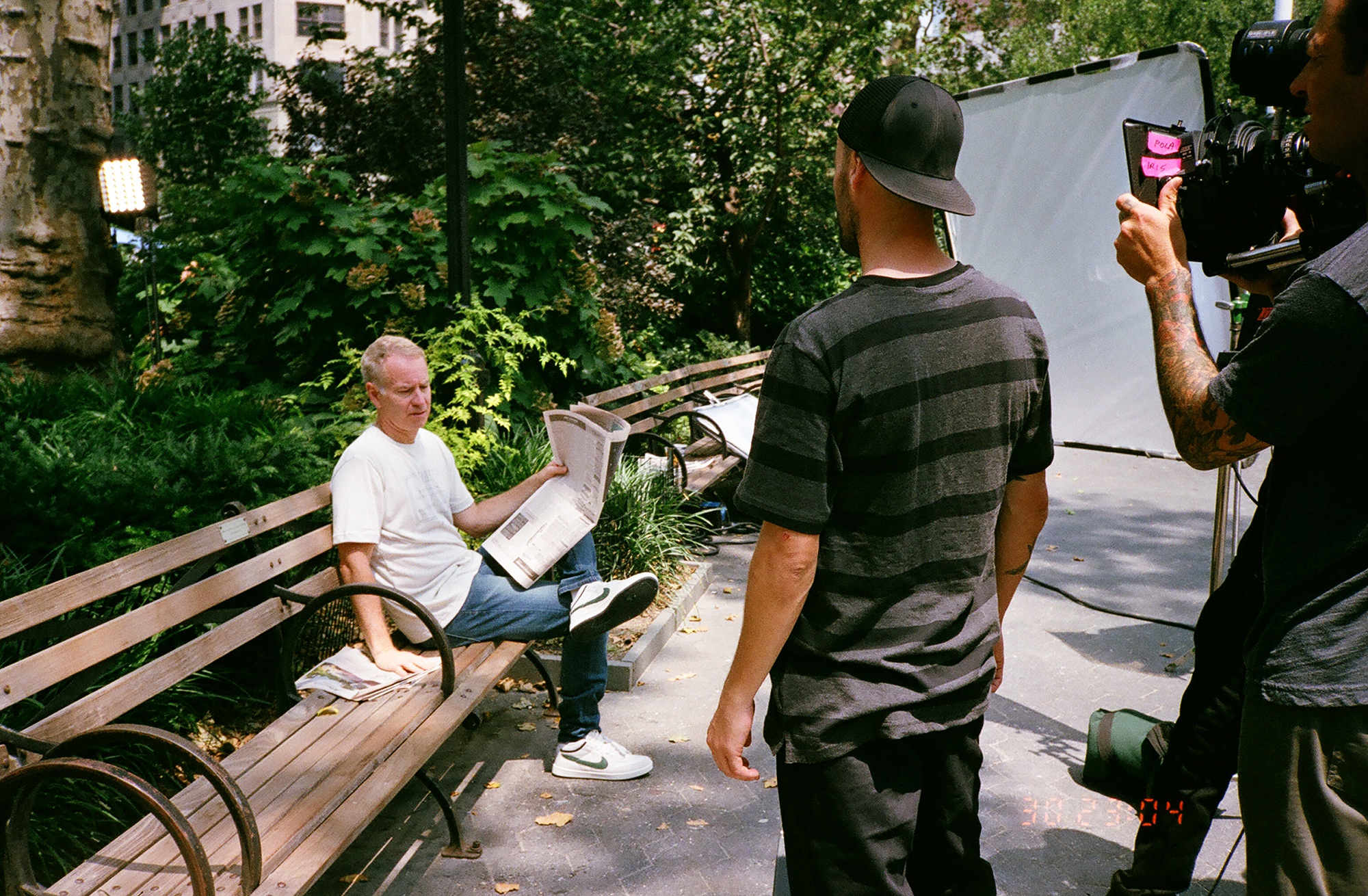 There’s an old John McEnroe ad that is an adaptation of James Dean walking in the rain. So we were trying to do that with Gino pushing. Gino is an athlete. He’s good at tennis, he’s good at hockey, and he knows what he’s doing. So with his input, we were able to get McEnroe for an hour and that’s a low-budget shoot for us. I don’t even think we permitted the spot in New York.

The same McEnroe you see on TV is the McEnroe in real life. If I remember correctly, McEnroe was like, “So you’re a pretty good skateboarder?” and Gino was like “eh, yeah.” Super chappy and sick. Their personalities’ are both really strong because they’re both true New Yorkers so it was cool to see them interact. Gino said he ran into him at an airport later, and McEnroe remembered him, so that was awesome. 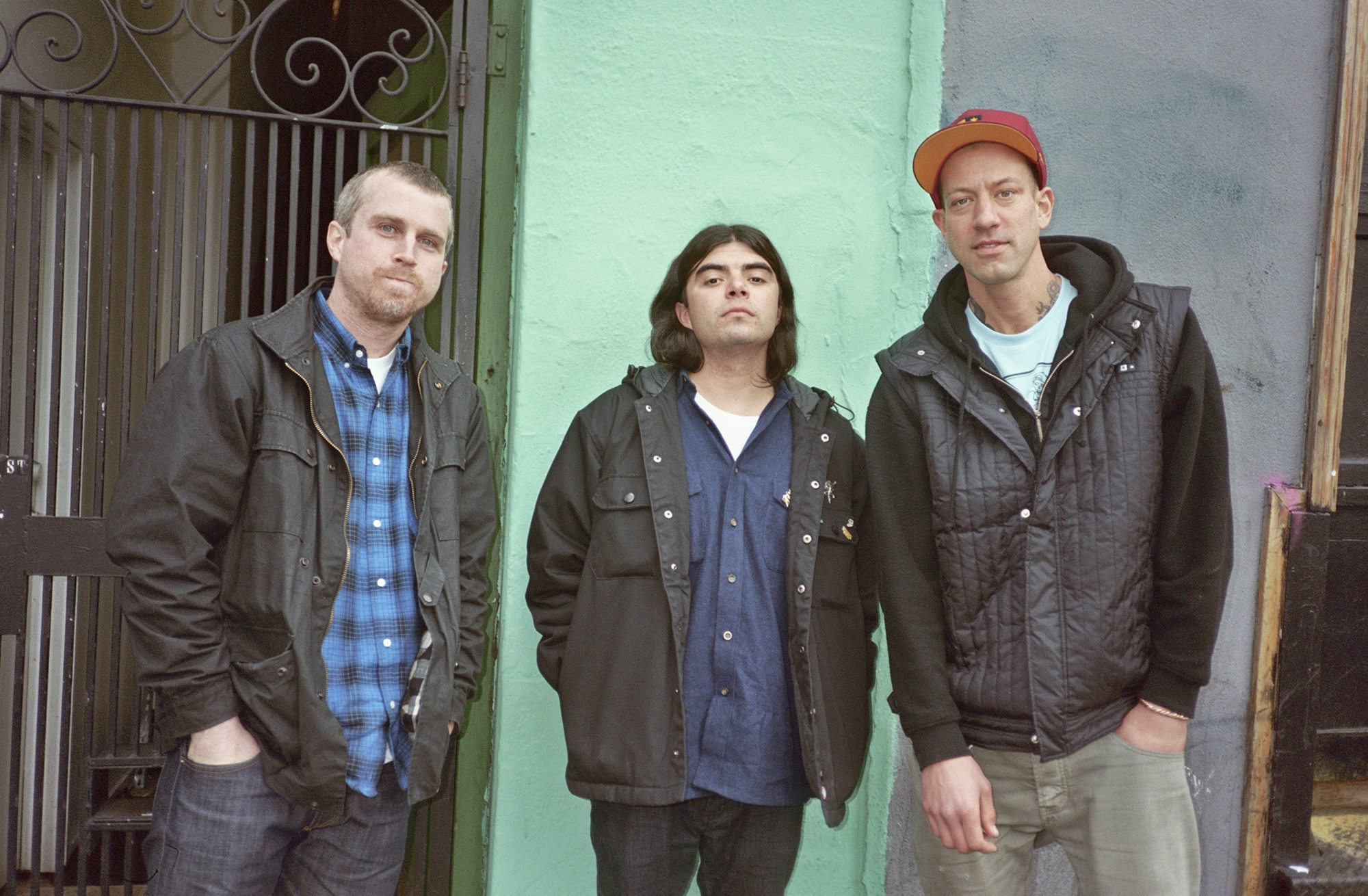 I want to say it was winter of ’08. Mr. Keith Hufnagel, Neckface, and Brian Anderson. This is in front of Keith’s office somewhere in the city.

Anybody could have taken this photo, but what Neckface would always say is, “Yeah you can, but a lot of people won’t let you.” That meant a lot to me. I had unique access to these guys, but they were my friends and they let me shoot photos of them.

Keith was a mentor to me and I looked up to him. I never really got to tell him that, but he was kind of everyone’s mentor because he had the confidence to tell you how he handled situations and what he would do if he was in your position. I learned a lot from him.