The number of talented skaters that come out of Florida is insane to me. On one hand, it’s such a utopia of death for senior citizens. On the other hand, as a young skater living in that environment, you’re forced to cope with the vast stucco wall society.

You have no choice but to deal with Floridians like the gun owners who claimed to actually shoot down Hurricane Irma, or the man got so pissed he threw an alligator through a Wendy’s drive-thru window, or the guy broke into jail to hang with the homies.

With that said, it gives me great honor to introduce a Florida native Mike Mag. Because Mike is a Brazilian citizen he was able to escape and head down to South America. He went down to test his perseverance, forget about the burdens of life in The States, and to film an entire part with spots found while traveling down the Amazon River.

The title of Mike’s part is a slight give away to his inspiration, but if you are unfamiliar with film director Werner Herzog, you might not have caught the reference to his film Fitzcarraldo, or the accompanying documentary about how it was made, Burden of Dreams.

To learn more about Mike’s connection to Brazil, the Amazon River, and Herzog, we reached out for a quick Q&A with him. If you want to see the entirety of Mike Mag’s Burden of Dreams, buy the DVD here. 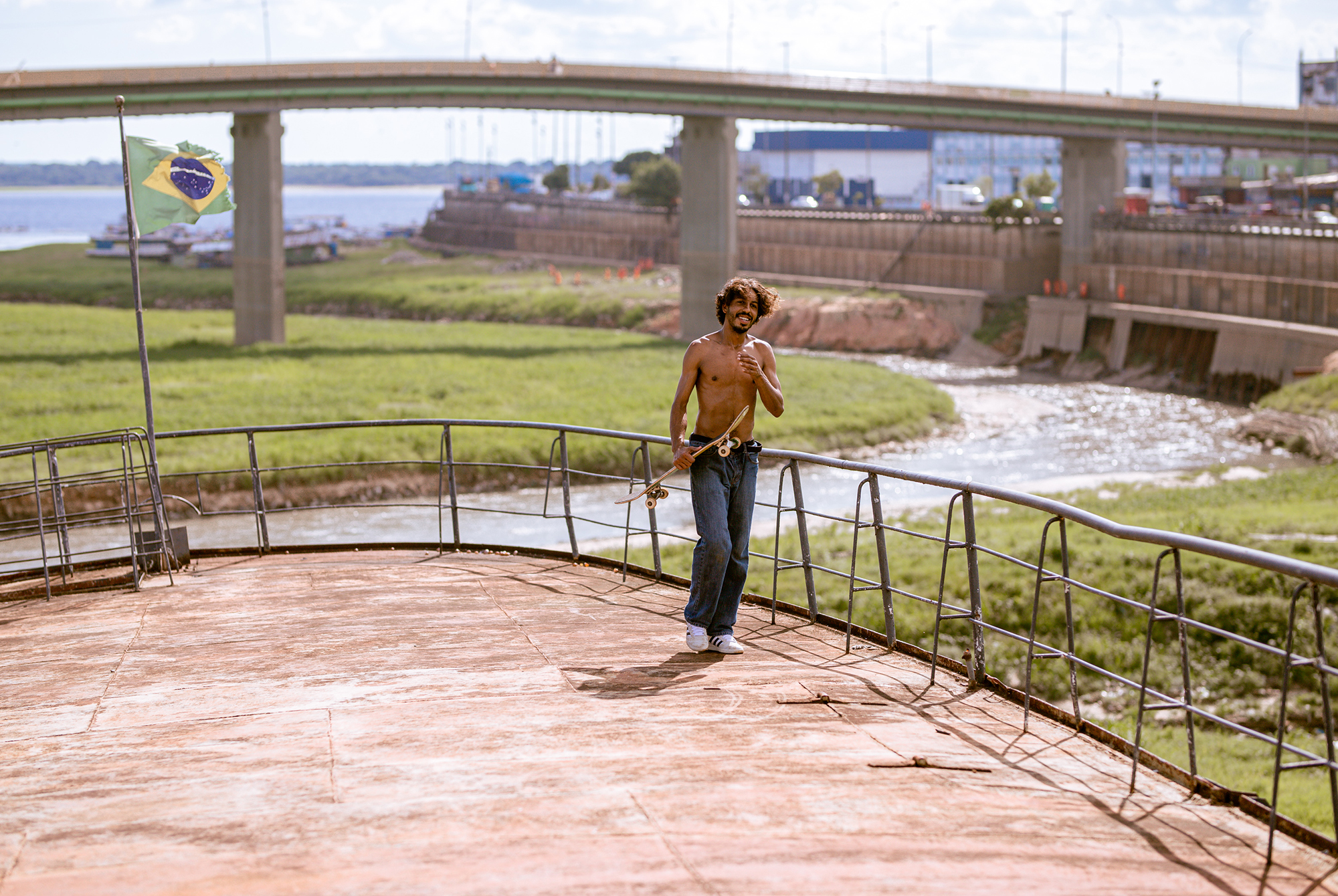 What led you to go into Brazil and do these solo missions?
Well, it all started with a breakup. As most good stories begin, it started with a tragedy [laughs]. I was all heartbroken so I went to Brazil, and I used all of that fuel and fire to film that “End of the World” part.

After that, I got back and I was already excited for another trip down there. With travel restrictions, there weren’t many places you could go, but being a Brazilian citizen, I can go back to Brazil. And I’ve always had this dream of doing a skate trip up the Amazon because I saw Skateboarder Magazine did it many many years ago. I think like 10 years ago.

Is that the video with Kenny Anderson and Jake Johnson?
Yeah, and Josh Stewart filmed it all. That was super sick. That video was always just in the back of my mind. And then I needed to go on another trip, so I sort of just hail mary’d it. I tried messaging some homies in Brazil to see what’s up over there, and they linked me up with the man in Manus, Adonis Perfeito, who is a legendary filmer over there.

I decided to buy some plane tickets, gather up a posse, and try to pull it off. First I went to Rio De Janeiro where my cousin lives. He skates and films VX and he’s really sick with it. He filmed most of the part. 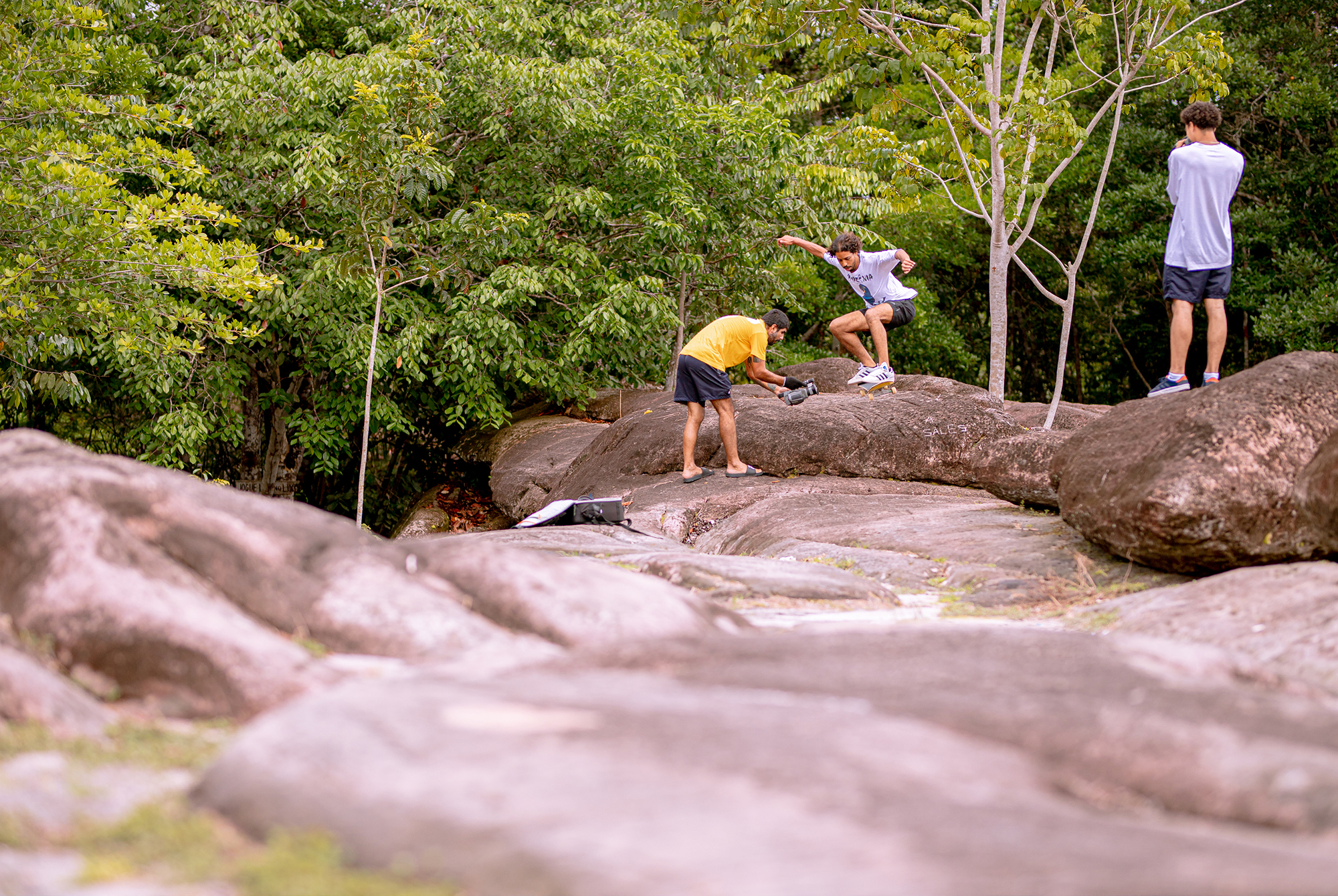 So given the title, the reference and the inspiration comes from Werner Herzog, right?.
Yeah. One of Werner Herzog’s films Fitzcarraldo, is about a man who tries to do the impossible in the Amazon. In this movie, the guy is taking a boat down the Amazon River, and he gets to a point where he has to take the boat out of the water and pull it over a mountain. He actually does it in the movie, and Werner Herzog actually does it in real life, too. It’s just truly an amazing and impossible feat. It just goes to show that you could do anything if you’re crazy enough.

Did you go through something like that when you were down there?
Yeah, I think the whole entire trip was metaphorical, like I was trying to pull a boat over a mountain. It was so hot and all of the spots were so rough. I went in with nothing and I was like, “Alright, I’m going to film a full part.” Towards the end, I was having a dry spell of clips. I was trying so hard, and trying and trying and trying. We were so close to finishing the video, but I couldn’t finish pulling the boat over the mountain. Then in the last final hour, I pulled that bitch over the mountain.

What was the bitch over the mountain? What was the trick?
It was a handful of them towards the end of the part. Everything is pretty much in chronological order. So the last few tricks were in Belem, and we were just getting our asses kicked. We were going on missions, trying lines for hours under the sun. The only thing I probably got was skin cancer. For days it was like that. 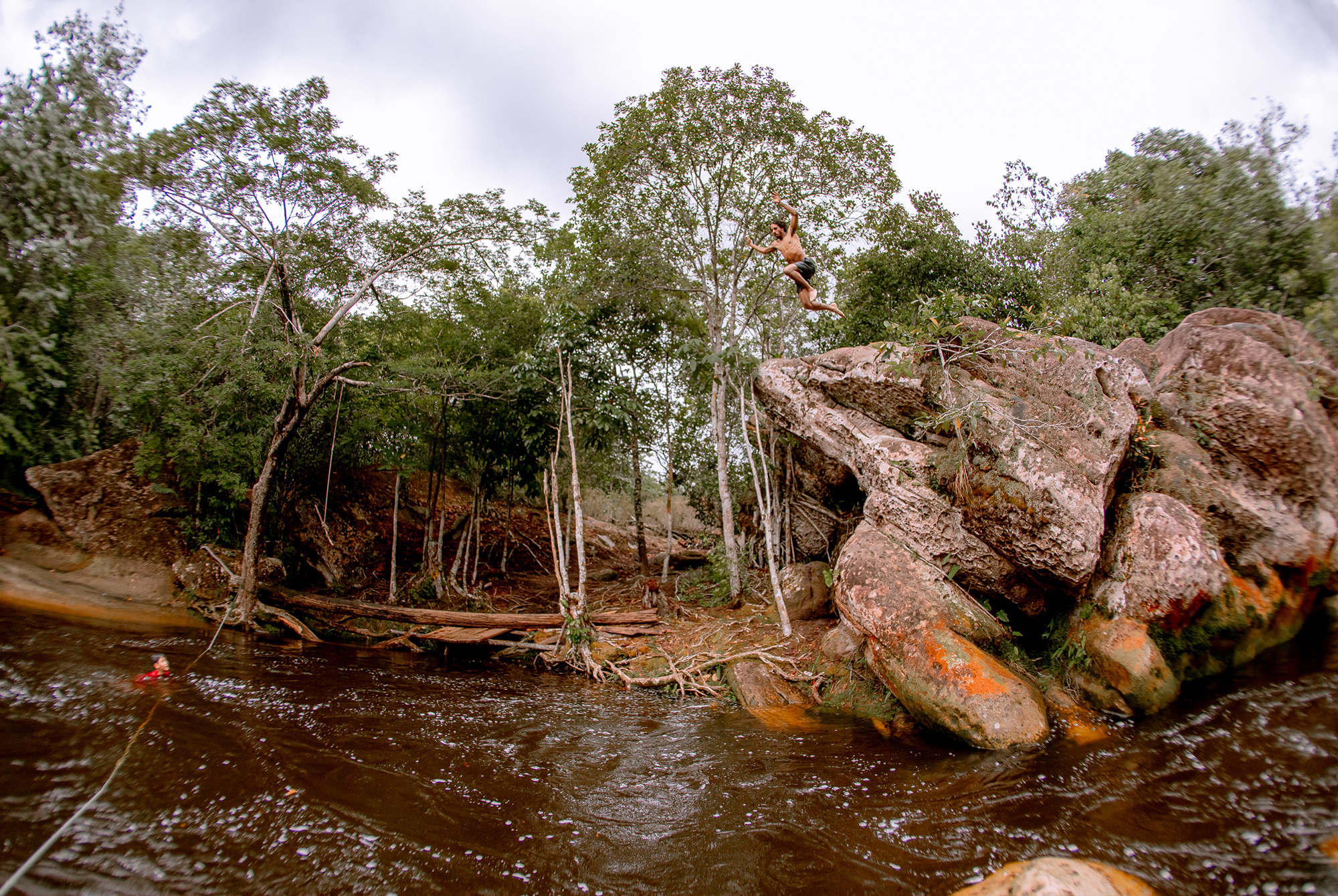 Did you go on an ayahuasca trip?
No, I never found the ayahuasca experience because we were skating so hard, constantly. There was never really a moment of downtime. But I did have some pretty psychedelic food poising experiences down there [laughs].

Did you get a worm, my man?
I don’t know. I wouldn’t be able to tell you now. In the second city, as soon as we got there I got food poisoning. I was out for a day or two because I couldn’t go too far from the bathroom. I couldn’t skate at all. Then for like five days after that it was like stomach ache every day, eating carefully and lightly. 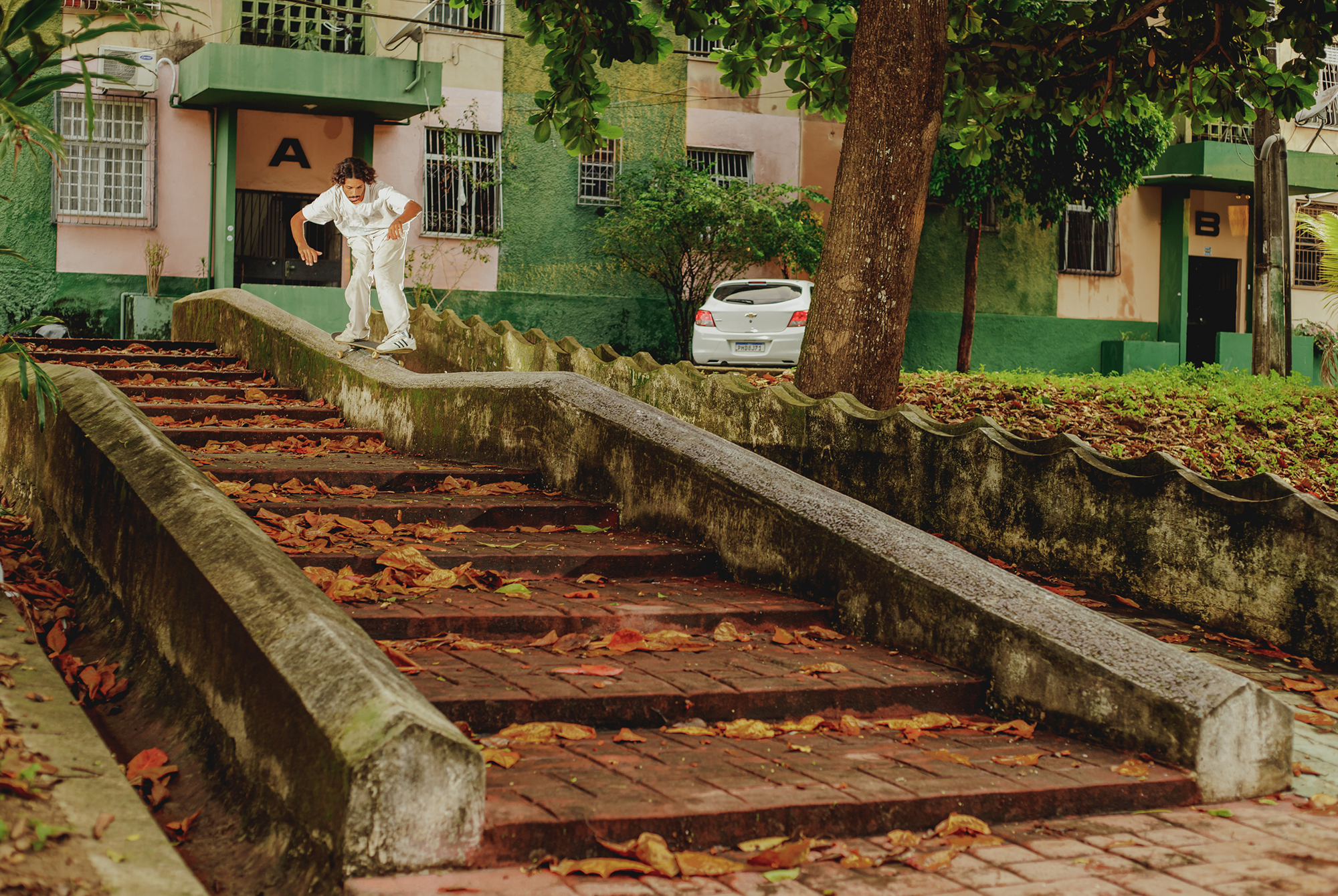 Tell me about your VX1000‘s survival skills.
So there are two VXs that we brought. I only had one originally, but I knew I had to get a second one because I was almost certain something would happen, for sure. There were some times where we would get caught in a flash rainstorm, like cameras out, mid-trick, and there’s nowhere you could run to. You have to put it under your shirt or cover it with your body. So we got caught in a few storms like that. Another problem was sweating. We were just pouring sweat, and there were a lot of drips into the VX which is a no-no.

You don’t do the shoelace handle trick?
No, but Adonis from Manus wears a glove. Pretty clever. 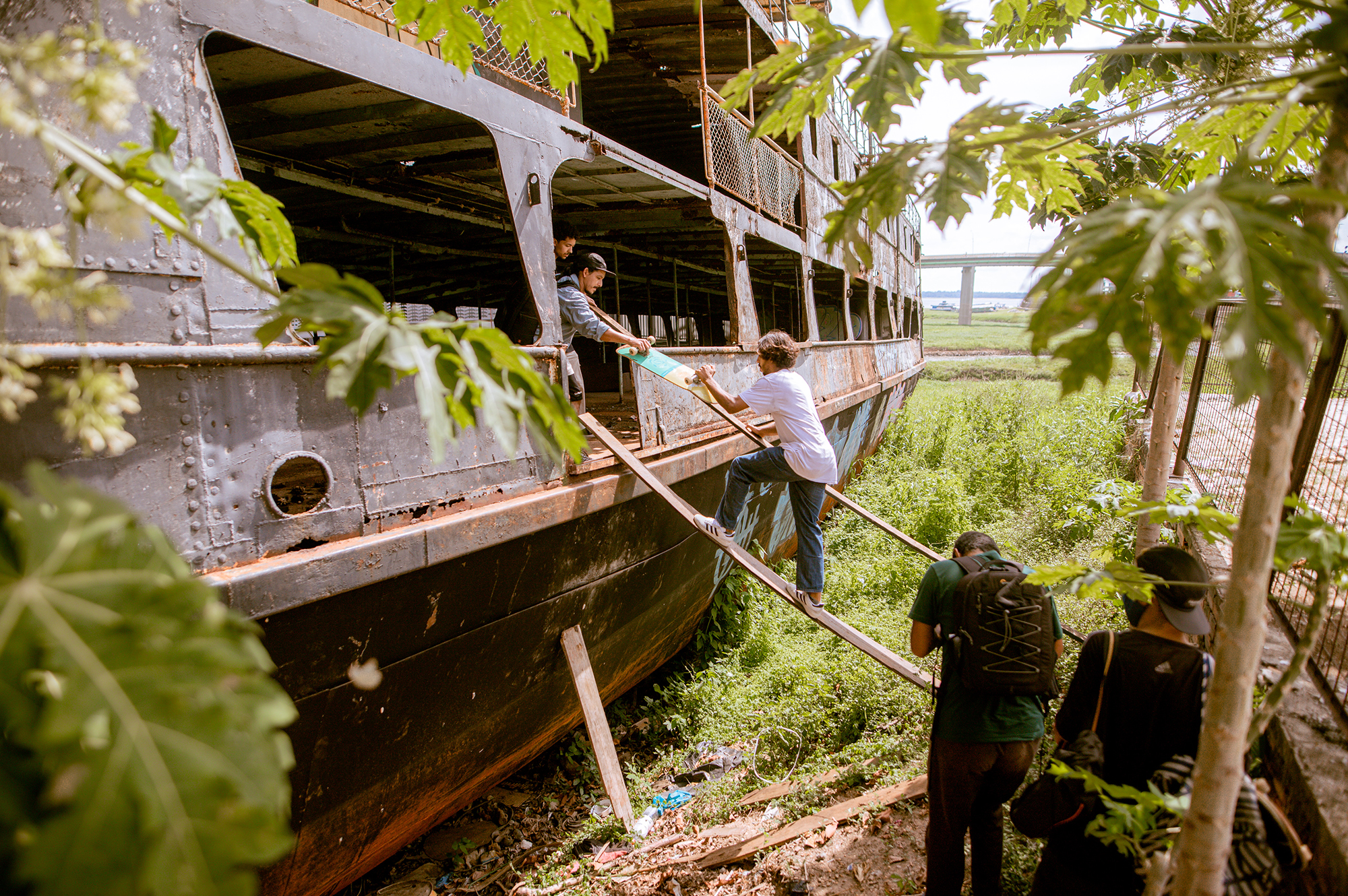 So you actually did take a boat down the Amazon, right?
Yeah, we went down the Amazon River. We were on the boat for two days, on this crazy boat, a bunch of people sleeping in hammocks. We had a little room because we had a bunch of camera equipment.

We started by flying to Manus, and we skated there for two weeks. We were getting so many clips, and that’s where Adonis is. The rest of the cities were more mysterious. From Manus, we got on a boat for two days and got to the next city, Santarem. We were alone there and didn’t really know anybody, but we ended up getting linked with the dudes in the skateshop that’s there. They were able to take us around to spots and stuff, they were super cool. That’s where I got food poisoning, so we lost some time there.

Then, we got back on the boat for two days to Belem. Belem is an amazing city that is on the east coast of Brazil. It’s where the Amazon river opens up into the ocean. It’s the gateway to the Amazon. We were there for a little over a week just trying to skate whatever we can. That’s where we were getting rocked and couldn’t get clips. I didn’t think we were going to be able to finish the part. That was like five days of that. I was thinking we were going to have to back to Rio De Janeiro and fake it.

On the last day, the pressure was on. Me and Cayo [Uchoa], the filmer, would wake up and eat breakfast and not even say anything because we knew the pressure was on. We were just thinking about it, not talking. Then, I don’t know, things just started to work in the final hour and here we are. 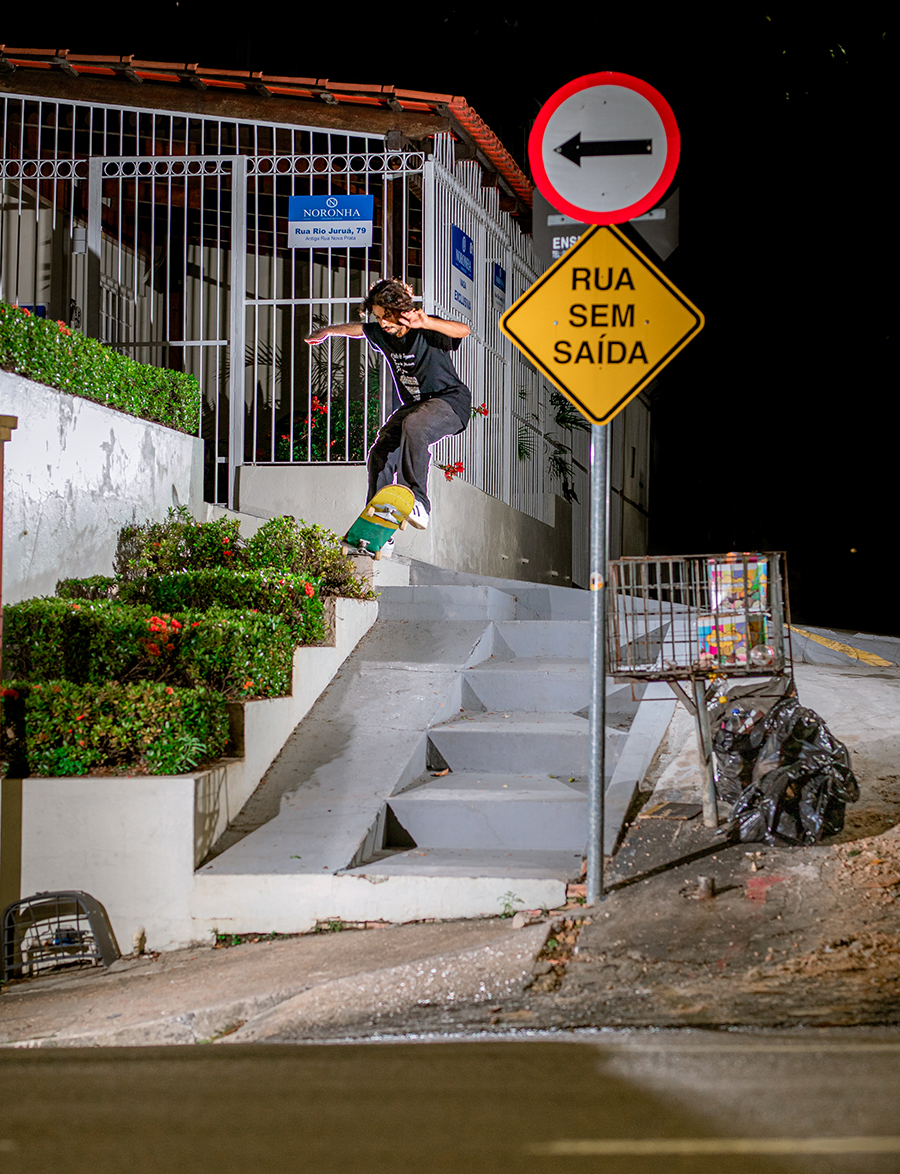 Lastly, can you give us five film recommendations?

Fitzcarraldo – This overly ambitious cinematic feat by Werner Herzog was the inspiration for my video part all filmed in the Amazon. It is the story of a crazy Irish rubber baron who dreams of opening an Opera House in the middle of the Amazon Rainforest. At some point during his journey through the Amazon River, he and his crew of natives have to pull a boat over a mountain to reach the river on the other side, a seemingly impossible feat, but he’s crazy enough to get it done in the film and in real life.

Black Orpheus (Orfeu Negro) – This charming greek tragedy set during Carnaval in Rio de Janeiro was the inspiration behind my last video part “End of the World.” A Brazilian film Directed by French filmmaker Marcel Camus; this film won many awards worldwide and its soundtrack scored by some of the most legendary Bossa Nova artists of Brazil is enough of a reason to give this one a spin.

City of God – This one may be one of the greatest films ever made. It is the story of a favela (ghetto) in my city of Rio de Janeiro. The story is told so well and the film is shot and cut so well you’ll want to watch it over and over again. Warning: Not for the faint of heart.

The Darjeeling Limited – This colorful and delightful Wes Anderson adventure is the story of three brothers who travel across India by train in an attempt to bond with each other. It’s a dream trip I’d love to do, a skate trip by train across India. Anyway, it’s a beautifully shot film by Wes Anderson. What’s not to love?

Carandiru – This is the true story of Brazil’s largest and most violent prison. The film culminates with the famed prison massacre of Carandiru, where 111 prisoners were murdered by the police. The police in Brazil are some of the dirtiest and most corrupt in the world. Once again, not for the faint of heart.