Most of us remember Ali Boulala as the jolly drunk from the early Baker and Piss Drunx days. He was someone who we could always count on for a skate hijinx clip or two, but he’s been out of the skate spotlight ever since tragedy struck back in 2007.

Ali has since maintained a sober lifestyle and slowly started to bounce back. He’s figured out how to channel that old Ali energy into new hobbies, namely his new band Ghost Boys.

We stopped by Sweden last month to meet the newly formed band and got to sit in on a day while they were recording a track. It was uplifting to see Ali in a new element, being genuinely happy and keeping it light-hearted with what he was focusing on.

How often do you get recognized Stockholm these days?
Depending on where I go, it could be every day. Especially at night when people get drunk and they have the guts to come up and say something. There’s a new film about my life that was in the newspaper, so there are more people that recognize me, and there are so many skaters here now. Well, everywhere in the world, actually.

Has making music been the most motivating thing for you recently?
Yeah for sure. One of my bandmates lives in a different city right now but he’s about to move back and we’ll be able to do a lot of stuff together. He came over with the little keyboard and his laptop and we played it for the last song. These days you don’t even need to be in the same country to record this shit, but it is way more fun when we’re together.

There’s a comedian and a rapper in the band, right?
Yeah, the comedian guy is, Linus Nordström and he plays guitar. The other guy is, Magnus Ekelund, aka Kitok. He’s the actual musician from the very north of Sweden. He was a singer and then he was a rapper. We actually met because he mentioned me in one of his rap songs and he was like, “We’re going to make this video, would you want to be in it?” That was maybe eight years ago and we’ve been friends since then.

I liked the music that he made because he is really influenced by the Beastie Boys. Licensed to Ill was the first CD that I bought. Then one day Magnus came to me like, “I want to start a rock band, do you want to do it with me?” I was like, “Ok fuck it, let’s do it.” 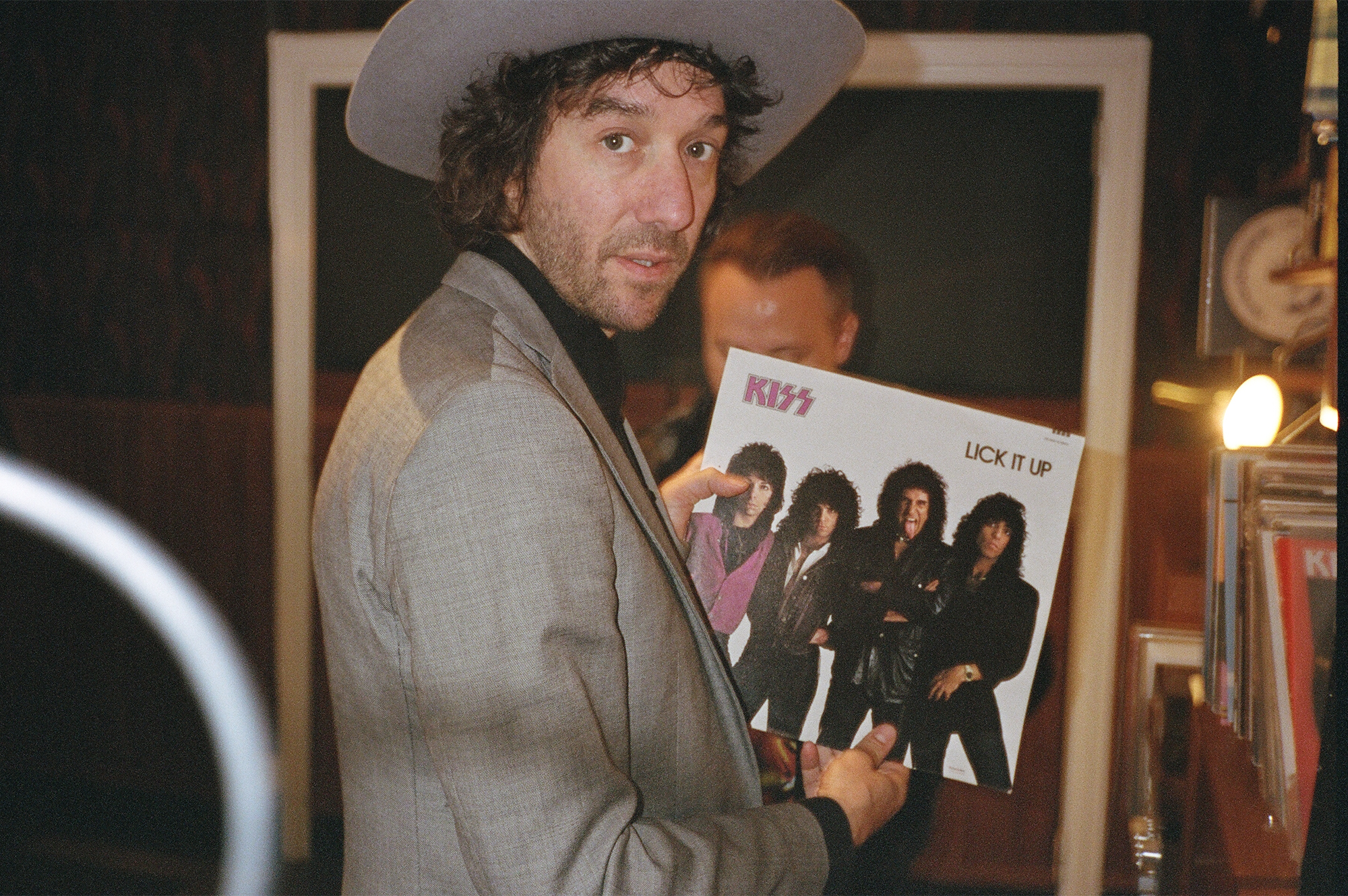 Have you always played instruments?
No, not at all. I started playing guitar on a skate trip with Bastien Salabanzi in Australia. I used to buy all of these remote-controlled vehicles, airplanes, and whatever with my money. They all broke and they were impossible to fly. The next trip I was like, “I’m not going to buy any stupid shit now, let’s buy a guitar.” I went to the store, and they asked if I want steel strings or whatever, and I was like, “I don’t know. I want that blue one, it looks cool.”

We went to Bastien’s apartment and started trying to play and it hurt my fingers. It was fucking insane. I couldn’t understand how fucking hard it was. It’s like skating – when you see people skating you’re like, “Oh I could do that, just jump around on a board with wheels.” Then you try it and it is years before you know what you’re doing.

Bastien also got really into guitar and we just kept playing. Now I have all of these guitars because every place we go, I want to buy a new guitar.

Did you take lessons?
I never had a tutor, but there was a guy that used to come over to tune our guitars, I think it was the same guy we bought weed from. He came and tuned the guitar and showed us some chords. Eventually, I learned more things, and I played other people’s songs and I learned my own songs. Then way later on I realized, fuck, I should’ve started with the piano to learn the theory of it all. My girlfriend got me piano lessons as a gift and it definitely helped me to get a better perspective on music theory and why things work together. Sure, you can learn things on your own but it’s just easier and better if you have someone.

How do you discover new music now?
I don’t know. Sometimes I like something on those Spotify Discover Weekly playlists, but it’s only ever one song because it is similar to one other song that I listened to. It seems kind of boring but I haven’t discovered anything new because I’m busy trying to make my own shit. Everything after the 90s, hip-hop-wise, I can’t even stand it. It’s like a whole different genre.

You’re talking about trap music and mumble rap?
Yeah. It’s a whole different thing. Why don’t they sound the same anymore? It’s weird. Why can’t they just have a beat and then a little sample and then rap over it? There are no new songs like that. 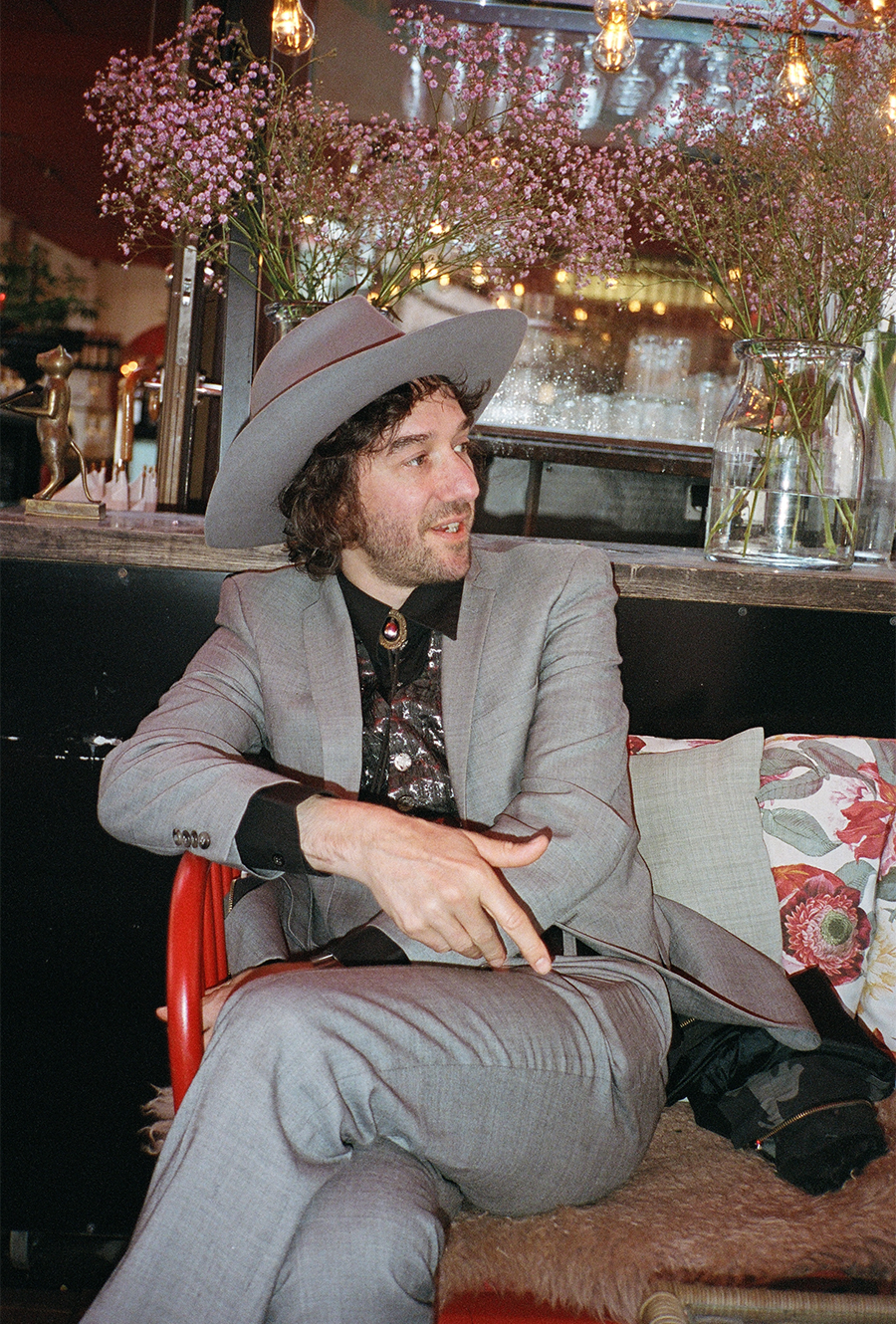 So you’ve channeled that addictiveness into the music?
Yeah, for sure. Just like I said, skating is just like playing guitar. I always thought you just play the thing. I never really reflected on how there is a massive learning process behind it. I already know how to skate, so to me it was like, whatever, just pick up a guitar and do some tricks. But I have to learn at least some basics first.

When you were a kid and you were skating more than you went to school, were your parents bummed?
I don’t know. I don’t know how much they knew that I just went skating but eventually I think they knew that I was going to do whatever the fuck I want anyway. So, how or why are they going to stop me? 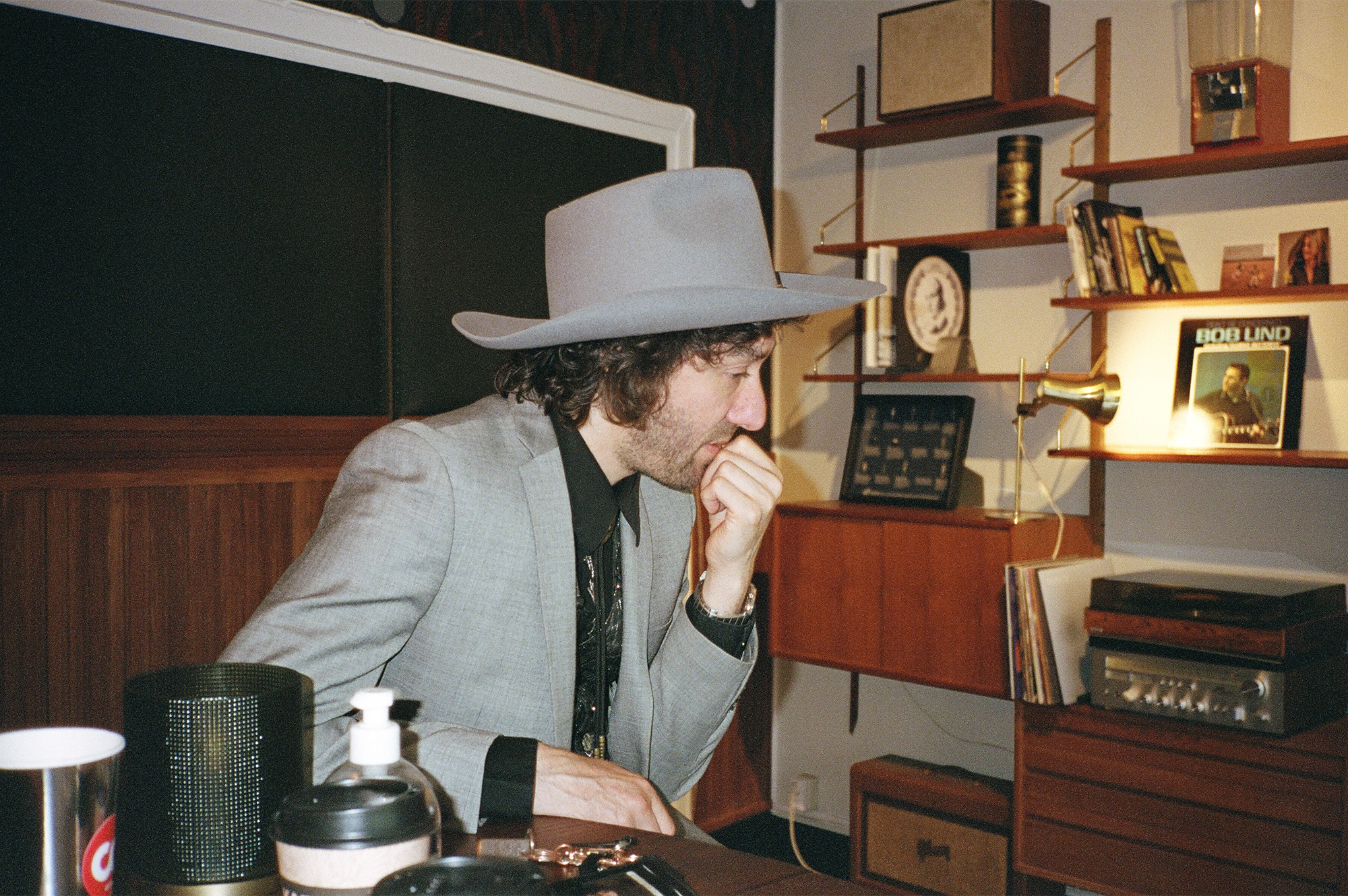 Do either of your parents have addictive personalities? I’ve heard a lot of addiction is inherited.
I’ve heard that too, but I don’t see that. My brother, for example, would’ve had an addictive personality too but I remember when I came back to Sweden, and he was like, “If you have fucking problems with alcohol and drugs then just quit. Can’t you see that you’re fucking up?” Now looking back on it I can see that he had no fucking idea.

My mom is on the whole opposite thing. She’s kind of like how I am now, she doesn’t want anything that she might be thinking she will need later. Even with potato chips, I can feel in my brain that I can’t control them.

I have seen every scenario with the other addicts that I have met through the 12-step program; the parents have been shit, the parents have been good, they have money, they don’t have money. There’s every scenario so it is so hard to see where it comes from. But the normal standard Dr. Phil thing is that it comes from the parents. But it’s not always like that. Surely, it’s like that a lot of the time but I wouldn’t say that’s the cause.

For example, Bastien got drunk for the first time when he was really young and he fucking hated it. I think he went to the hospital and got his stomach pumped and then he never drank again. I remember the first time I got drunk, I puked too. I didn’t go to the hospital but I thought to myself, this is shit. But then I kept doing it anyway. It’s strange. 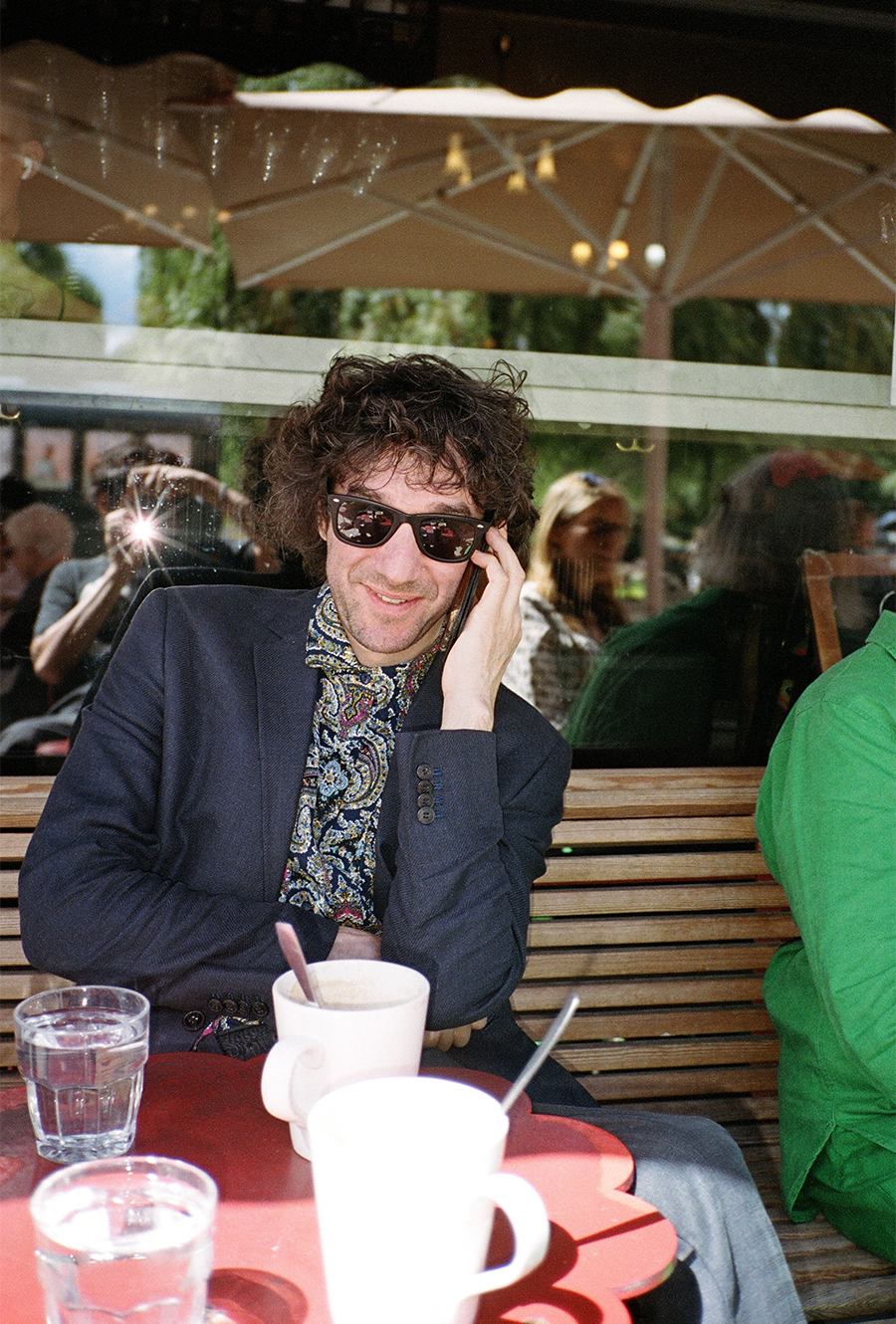 How did alcohol transition into using into harder drugs? What was the evolution?
Like I said, the first time I got drunk was a kid, puked, and thought it was shit. I couldn’t believe people drank alcohol because it made you puke. I probably smoked weed after that, but at that time, all my friends smoked weed every day. It was as if they were drinking tea.

Then when I was 18, I smoked crack in San Diego. I thought it was going to be the gnarliest thing ever but it was not at all what I expected. I did it again and again and again and then I obviously got hooked. I met this guy who had a skate shop in England and I heard that he was doing heroin. So I met him and became friends with him and I asked him to get me some heroin. He said, “No way! I’m not going to let you do heroin.” I said, “I will show you how to make crack,” and he said, “Deal.”

That was the evolution, and where do you go from there? I quit, and I started, and I quit. I quit drinking for a while, not realizing that I can’t quit drinking if I keep doing cocaine and heroin. I couldn’t go into any bars, because they were like, “You were too fucking haggard. You can’t come in here.”

Eventually, I had to quit everything. I drove myself to the psych ward. I went to the fuckin’ 12-step meetings. I thought it was a hoax at the start, like the people in the program looked fine, they didn’t even look sketchy. I was like how is this true? But I had nothing else to do but keep going there and trying to be sober.

When I started going to meetings in the beginning, they prefer that you not talk specifically about what drugs I took. But there were some people that I got familiar with and after the meeting, they’d ask, “So what drugs did you use? I thought you skaters just smoked weed.” When I told them, they were like, “Holy fuck, crack?” Crack doesn’t really exist here in Sweden. There’s coke, of course, but they don’t sell crack here. I don’t know anyone who made crack here, except for myself. Most people have only seen it in movies.

Interview by: Ian Michna
Photos by: Ian Michna
Video by: Max Seeger & Ian Michna
Listen to the band, Ghost Boys here.
Share this with an amateur rock star on Facebook
Report this as out of key on Instagram and Twitter