RUNNING A SKATE PROGRAM FOR REFUGEES IN GREECE DURING CORONA 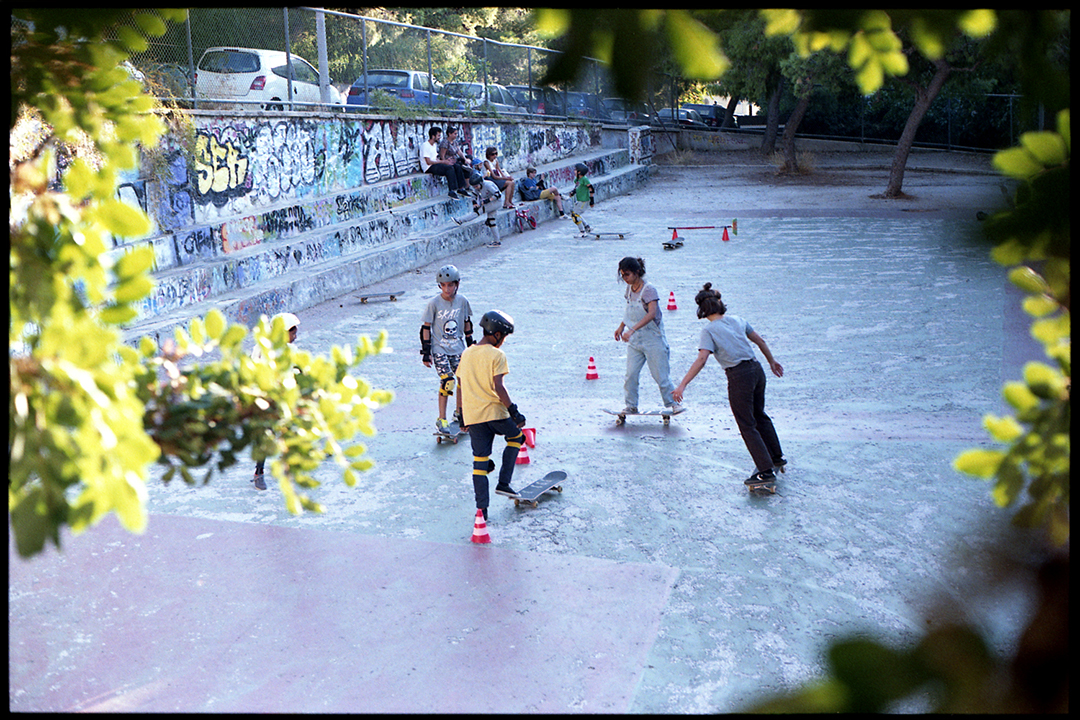 Skateboards can be an incredibly silly thing. It’s literally a toy that you use to run yourself into things, pretty ridiculous if you think about it. But it’s also an incredibly magical thing, able to create joy, community, and a good time in even the bleakest of circumstances.

Take, for instance, a refugee camp in Athens, Greece. Hard to imagine a place you’d rather have to live: they’re overcrowded, under-funded, and stigmatized by their neighbors, and this is still a better place than where these residents fled from. Sounds tough, but add in access to the genie that is skateboarding and suddenly things are a little less bad than they were before.

This is where Free Movement Skateboarding comes in. Started by Ruby Mateja and Will Ascott, FMS Obviously, skateboarding is no panacea, there are many problems that FMS can’t address, and those are made more critical as coronavirus spreads through the camps.

Will wrote up an account of the program’s beginnings and the challenges their kids face now. Give it a read…

Three years ago, Ruby and I drove off the ferry from Italy to our new home country of Greece, welcomed by the rich blue seas and centuries-old olive groves with roots clenching the ground in Athens.

With that grant, we started Free Movement Skateboarding, hoping skateboarding could make a fraction of the impact it made on our lives to those who’ve been through more shit than most.

During our long drive south from London, we were conscious of one set of questions: How do you make a skateboarding project truly help in an environment of extreme deprivation? What role can skateboarding play in a place crippled by an economic crisis and years of austerity? And how can skateboarding be a positive outlet for the migrants that had traveled north in search of a better life?

When I’d visited three months prior, I’d seen that the basic needs for those in the camps were somewhat being met, but the lack of youth services, especially for teens, was evident. Skateboarding, presented in a specific way, is what I felt Ruby and I could best offer. 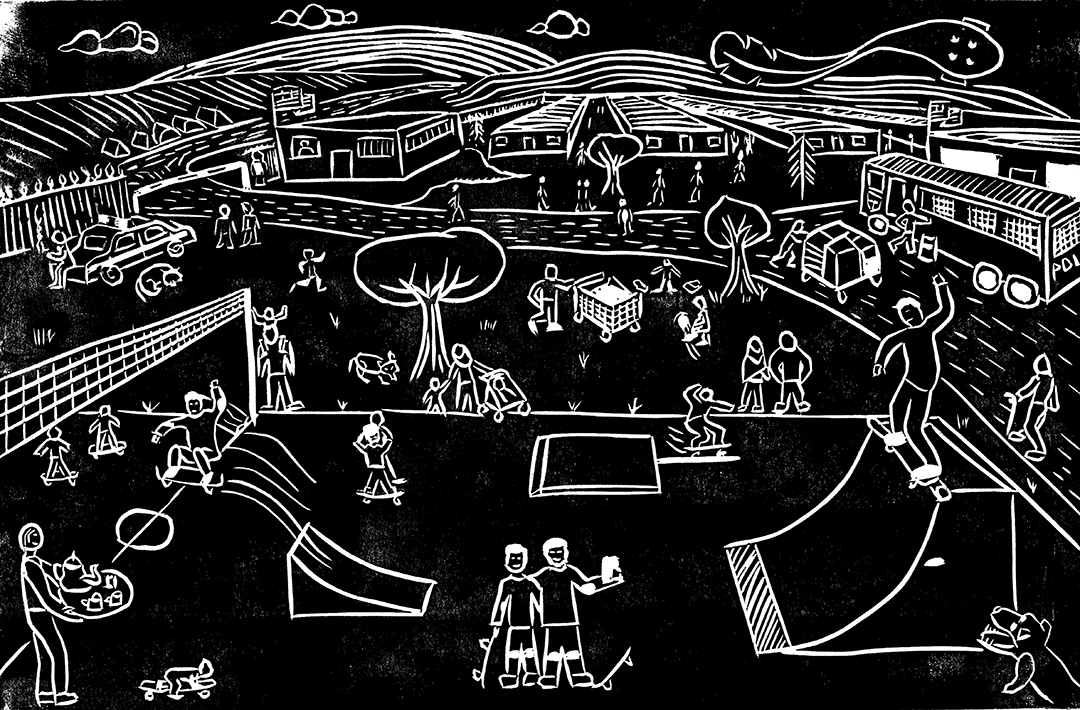 Though we were uncertain how they would unfold once we arrived, the following ideas stuck: First, we wanted our skateboard lessons to address gender imbalance from the get-go. Second, local integration, by offering opportunities of local Greeks to work with us or attend the sessions, was a key component of helping displaced communities integrate into the skate scene and community at large. Lastly, we wanted to focus on developing positive mental wellbeing for these kids, through trauma-informed care, yoga warm-ups, and by having a consistent staff.

These three pillars would come to define Free Movement Skateboarding from then on, but we’d soon learn of the difficulties of putting theory to practice. 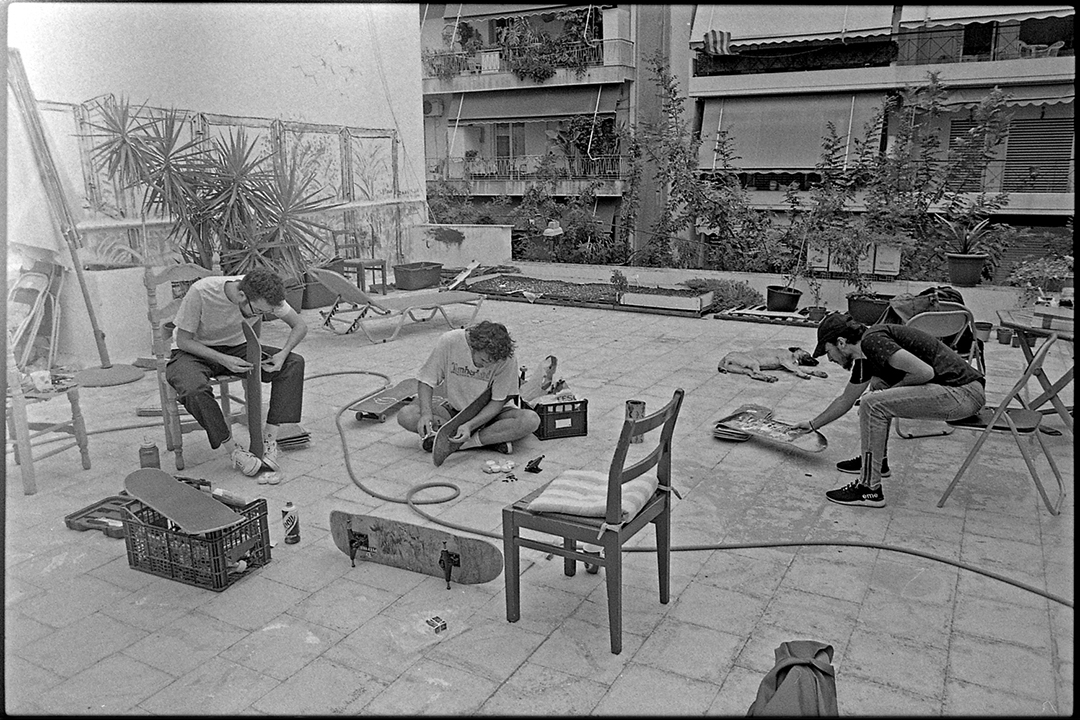 DAY-TO-DAY AT THE CAMPS

On our arrival in Athens, under the eye of master carpenter Benji Sowter, we built a portable skatepark that fits perfectly together like Russian dolls inside our van. The first place we set up the park was a basketball court, a stone’s throw from a squatted old school housing hundreds of otherwise homeless people, mostly families, and nearby the Khora community center.

In those early days, we’d arrive to a small, excited group of Greek children and their parents, fresh out of the local primary school. We’d get these kids padded just as dozens of others came from that closeby squat.

These kids were especially full of fire, but the comparatively challenging behavior the displaced kids brought was reflective of their trauma, their living situation, and their lack of formal education.

Often, though, these characteristics make for the most committed skaters. We would try to calm these sessions with structure, but nothing brought more communion than the serendipitous moments of kids from one place teaching kids from another place. It was unity, diversity, concentration, and enjoyment in action. 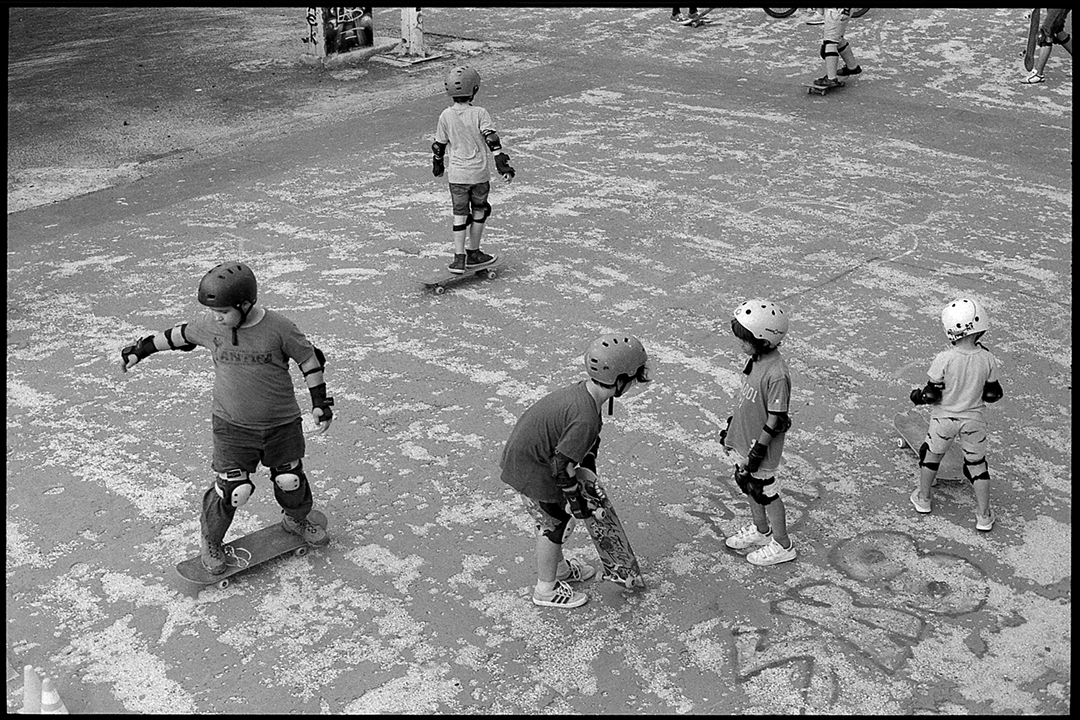 The kids we teach love skateboarding, just like you and I. That’s pretty much the only thing that homogenizes them. Otherwise, in appearance, personality, and migration status, they are unique. They’re Afghan, Syrian, Greek, Iranian, Congolese, Spanish… They’re 5 years old, they’re 22. Christian, Muslim, atheist. They’re diverse genders. They’re tiny, quiet, and happy to play with marbles. They scream reggaeton lyrics in French. 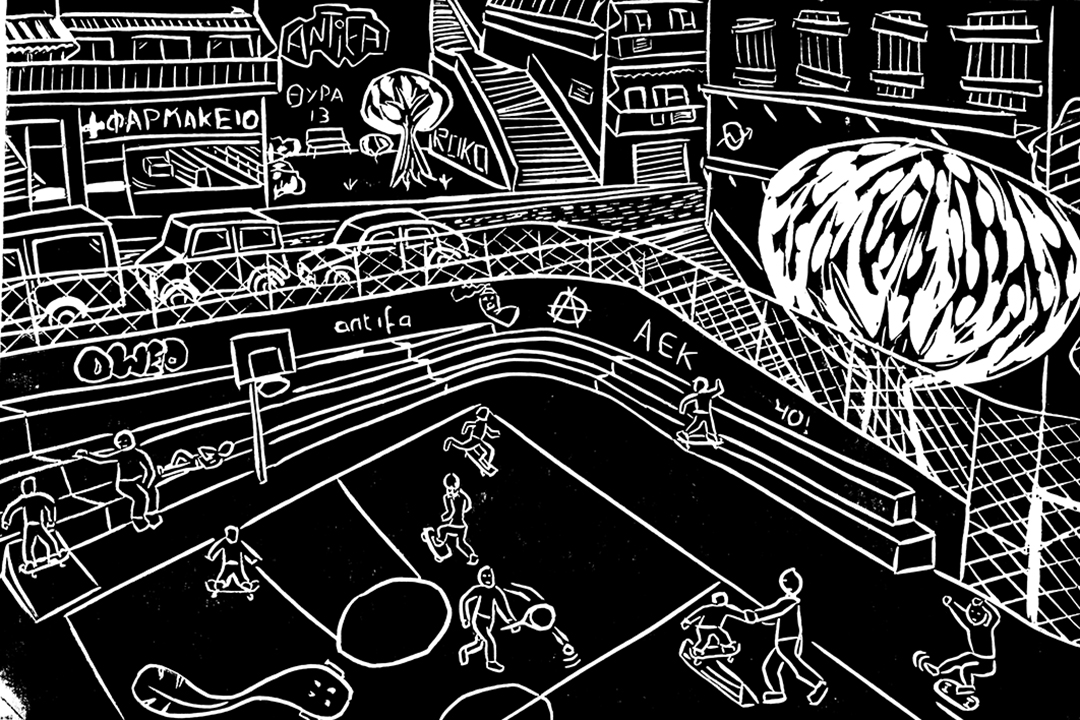 In September 2019, just as our program was gaining momentum, the front pages of Greece’s newspapers were filled with those awful stereotypes. The squat so many of those kids came from was forcibly evicted by armed militarized police at the crack of dawn. Innocent families were arrested, and many accounts of police brutality soon surfaced.

Most of these families were sent to live in the grossly underprepared Corinth Detention Center, over an hour’s drive from Athens. Corinth had no public education available, healthcare was next to nonexistent, and people were fed cold, inedible military rations.

Back at the basketball court, the Greek kids asked after their suddenly absent friends. Our sessions had become notably smaller since the evictions, and sadder too. Remember that feeling of identity that had been fostered through your first skate crew? Imagine the feeling of loss as half of your crew is ripped away from you. Imagine being the ones ripped away. Three years on, the sessions are ongoing, but the loss of those familiar faces and the friendships formed between the local and displaced kids is impossible to forget. 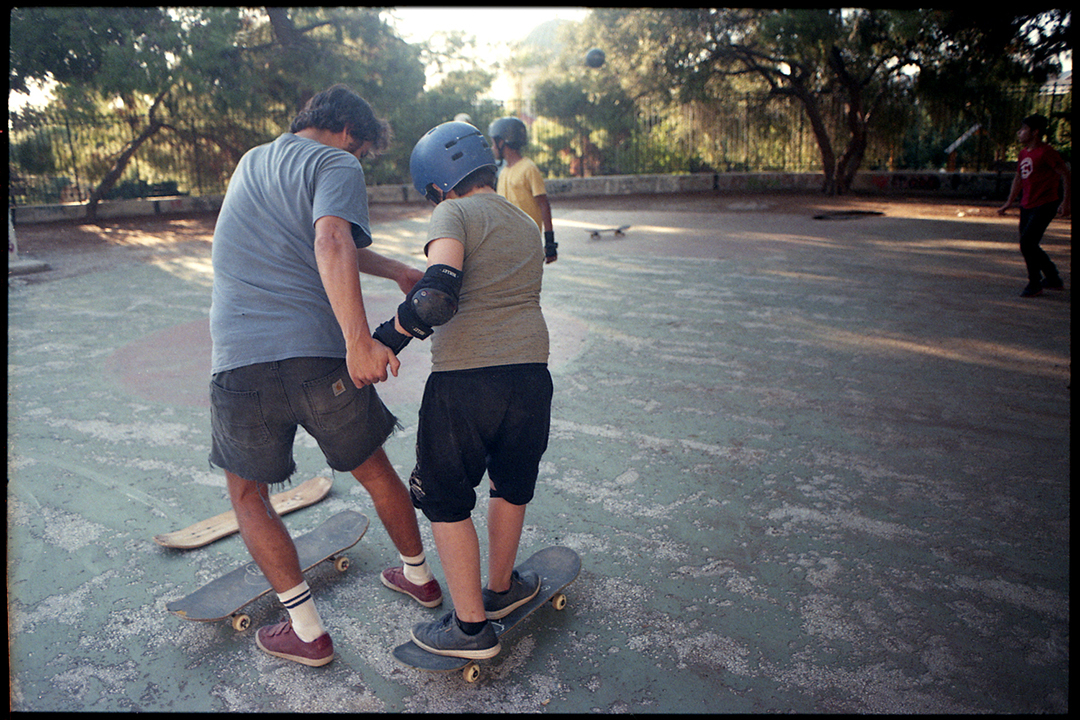 Over the last 18 months, we’ve also been working in another camp called Schistou, a 45-minute drive from the city and almost inaccessible by public transport. Like so many other refugee camps, Schistou is isolated enough that Greeks won’t have to encounter these people. The state imposed a de facto social distancing policy long ago.

The kids here are sick of being in the camp with its minimal youth activities. A couple of mental images stick out to me that sum up their boredom, instilling in me both admiration for the kids’ creativity and fury at the position in which they’ve been left.

One of the favorite toys here is a plastic, electric mini-car that’s now missing its motor and some of its wheels. Still, I see two 5-year olds playing with it, one pulling the other that sits in the driver’s seat, making the finest rumbling Ferrari engine sounds.

The next week I see the same children, now with 3 others, whizzing along the perimeter fence, squeezing on an electric Lime scooter, the type the people in the city rent to get around. An older boy with phenomenal engineering knowledge had spent the past week disabling its GPS tracker so that everyone could play with it for free. I wonder how many of Lime’s highly-paid programmers could do this, but then again, it’s unlikely they’d have either the infinite aimless time to devote to the task or the initiative to jailbreak something to offer to people for free.

Boredom is the undersung menace of displaced people everywhere, but it is well fought with unparalleled inventiveness. 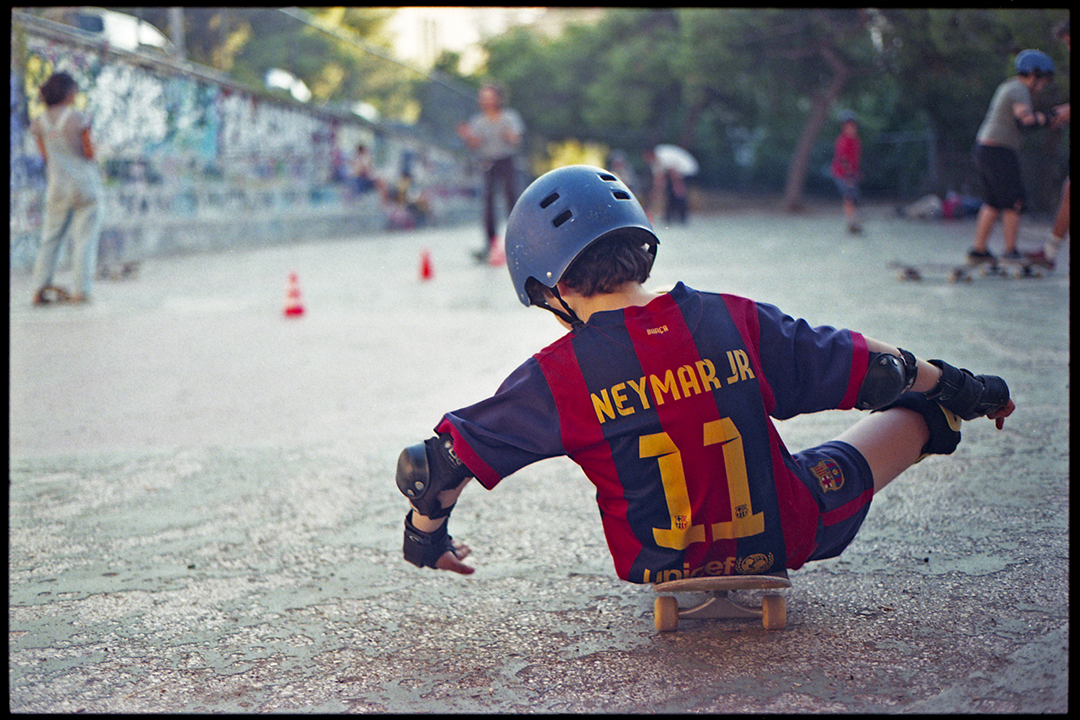 After a year of Free Movement sessions, the Danish Refugee Council, our partner organization, contributed 20 complete skateboards for the most regularly attending kids. While these kids live in an environment of scarcity, the effects of a toy with infinite possibilities are beautiful. They’ve developed greatly and birthed their own unique microcosm of skate culture. Curiously, part of this culture includes fully removing the griptape off their boards. In doing so, one macho 13-year-old Syrian boy has revealed a beautiful pink My Little Pony top sheet graphic on his Enjoi deck that tickles me every time I see it. 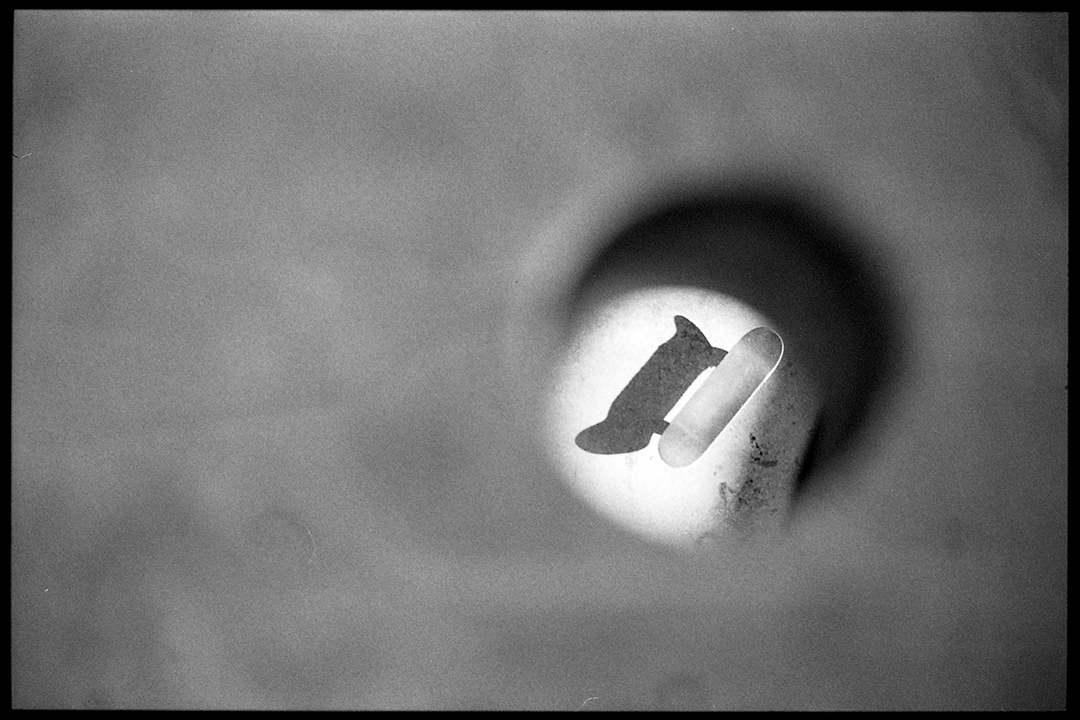 THE CAMPS UNDER CORONAVIRUS

And then one evening in March, COVID-19 stopped it all. We did our best to respond, but I can’t say we were fully prepared for a pandemic. As the Greek ministry rightly banned non-essential services (which includes us) from operating in the camps, we contacted our partner organizations and canceled everything until further notice. Amidst this great uncertainty, we are doing what we can to maintain contact with the communities we work in.

Unlike my dear friends and colleagues at Free Movement in Greece, I returned to my parent’s home in British suburbia, enjoying a comfort unavailable to those we teach. When I consider that on average, migrants spend 17 years between fleeing from their home to finally settling elsewhere, with these years often marked by trauma and an interminable uncertainty, my complaints of boredom are ridiculous and I’m starkly aware of how lucky I am. 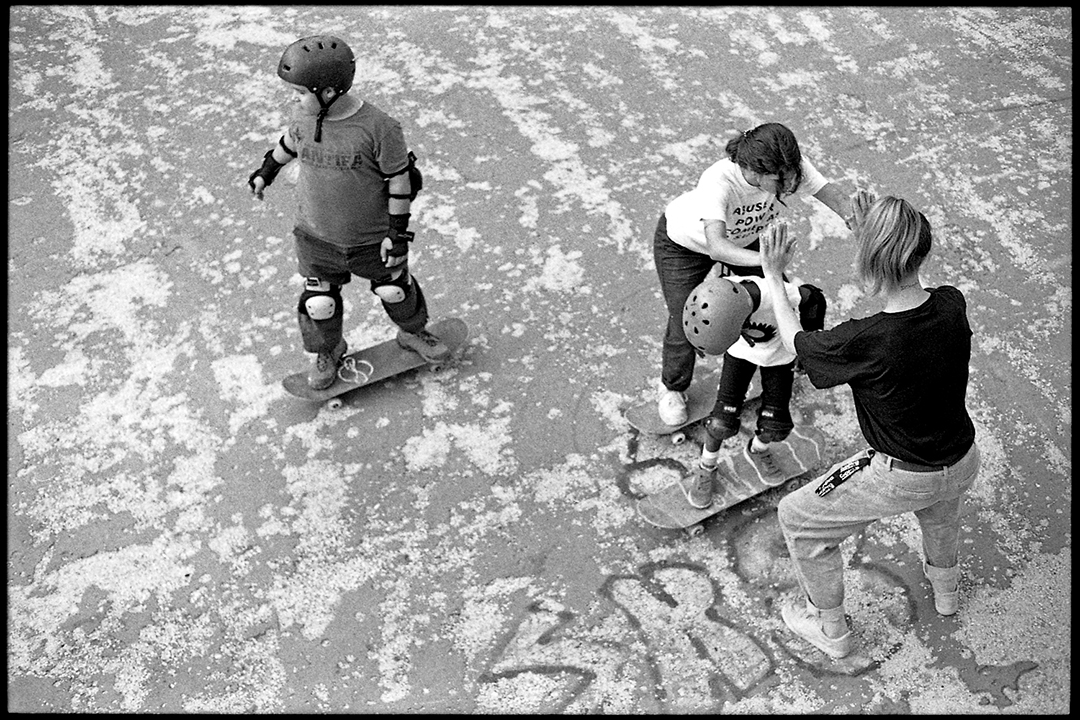 Since the pandemic, we’ve been working towards ways of maintaining contact with our participants, while pushing advocacy and fundraising efforts. New challenges arise in creating video content for kids across multiple languages who may not have access to a phone, arts and crafts materials, any real space and who aren’t allowed outside, but we’re doing our best. We’ve all taken personal pay cuts, and some team members still in the area are cycling or using our van to help with distributing free meals to those who need them. 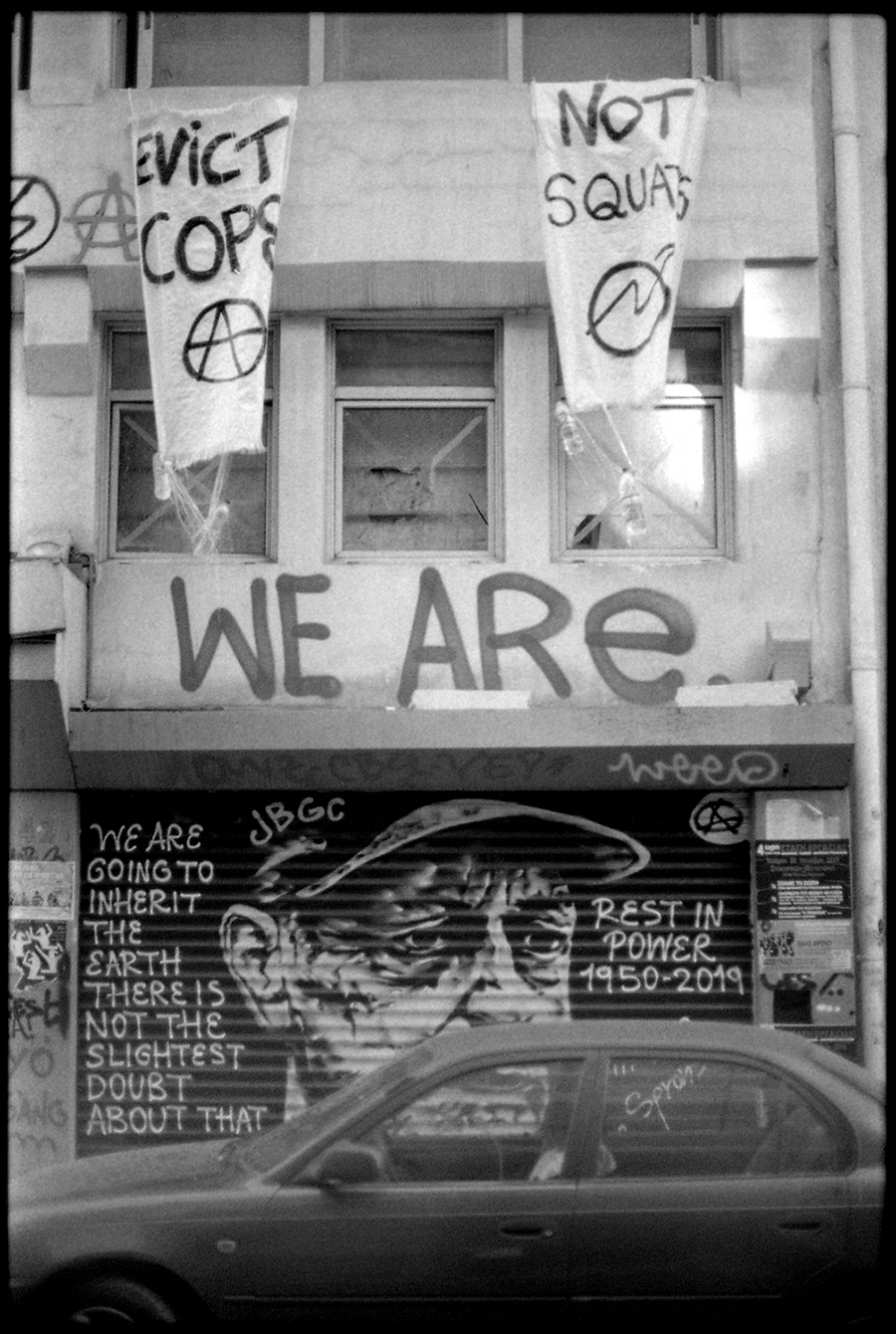 While individual efforts are something, they do not address the massive gap in resources these communities need to safely survive. The state must take responsibility.

In these camps, four families are crammed in the space meant for two, and not enough food is available. How can they social distance? How can they fight off a virus with an immune system weakened by hunger? These are the conditions in which infectious diseases wreak havoc.

With an estimated 40,000 people in Greek refugee camps and two camps locking residents in after confirmed cases, the state cannot be allowed to abandon its most vulnerable. Even right now the authorities are evicting more and more people, how can they be expected to stay-at-home if they have no home to speak of? 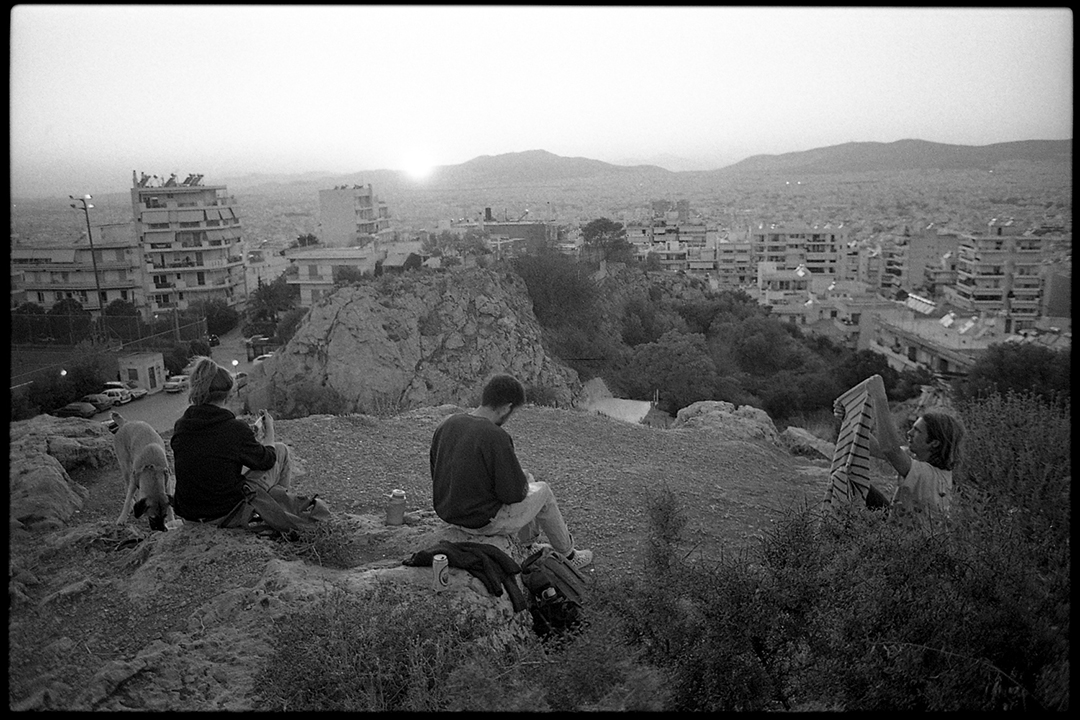 With the right action, the worst outcomes of an outbreak are not an inevitability. We are calling on the Greek government and EU to act. They must evacuate the camps and get people into Greece’s many empty apartments and hotels to try and guarantee safe and sanitary conditions. We have seen what governments are capable of regarding public expenditure and mobilization in the last months. That compassion must be extended to the most vulnerable communities if we want our future to look less ugly than our past.

The pandemic is upon us, and inaction is not an option. Please sign the petition, write to your local politician, do what you feel you can to get conversations about this situation going. The people in these camps are good people, some of them happen to be skateboarders like you and me, and none of them deserve to be trapped in these camps with this brutal virus. 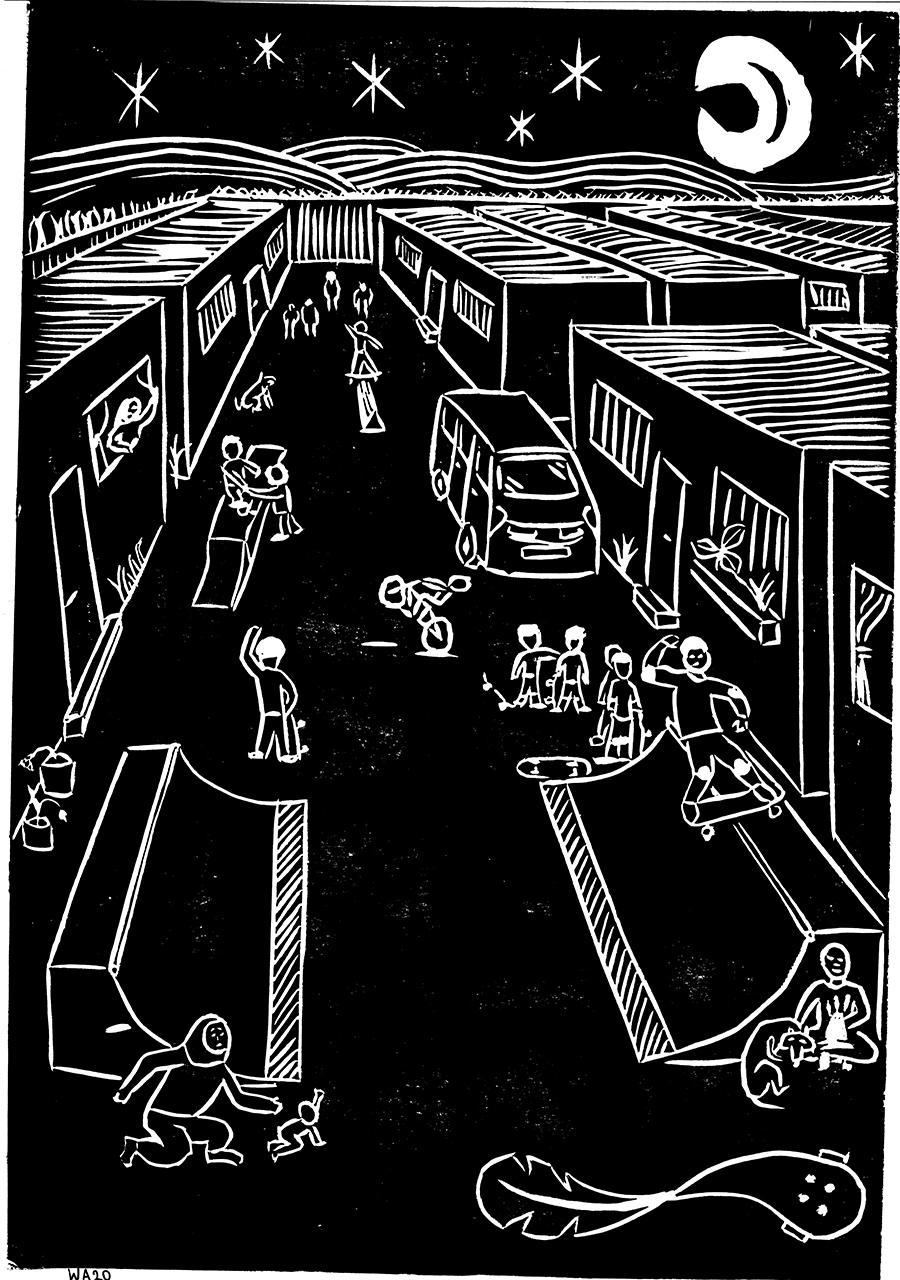 Find out more on the Greek camps under COVID-19.
Rock a T-shirt to show your support.
Sign and share the “Leave No One Behind” petition.
Anything and everything helps.

Words and linocuts by: Will Ascott
Photos by: Owen Godbert
Share this with the 10 people that are still on Facebook
Promote this to your sugardaddy on Insta or Twitter