THESE SKATE SHOE NERDS SHARE SOME OF THEIR RAREST KICKS 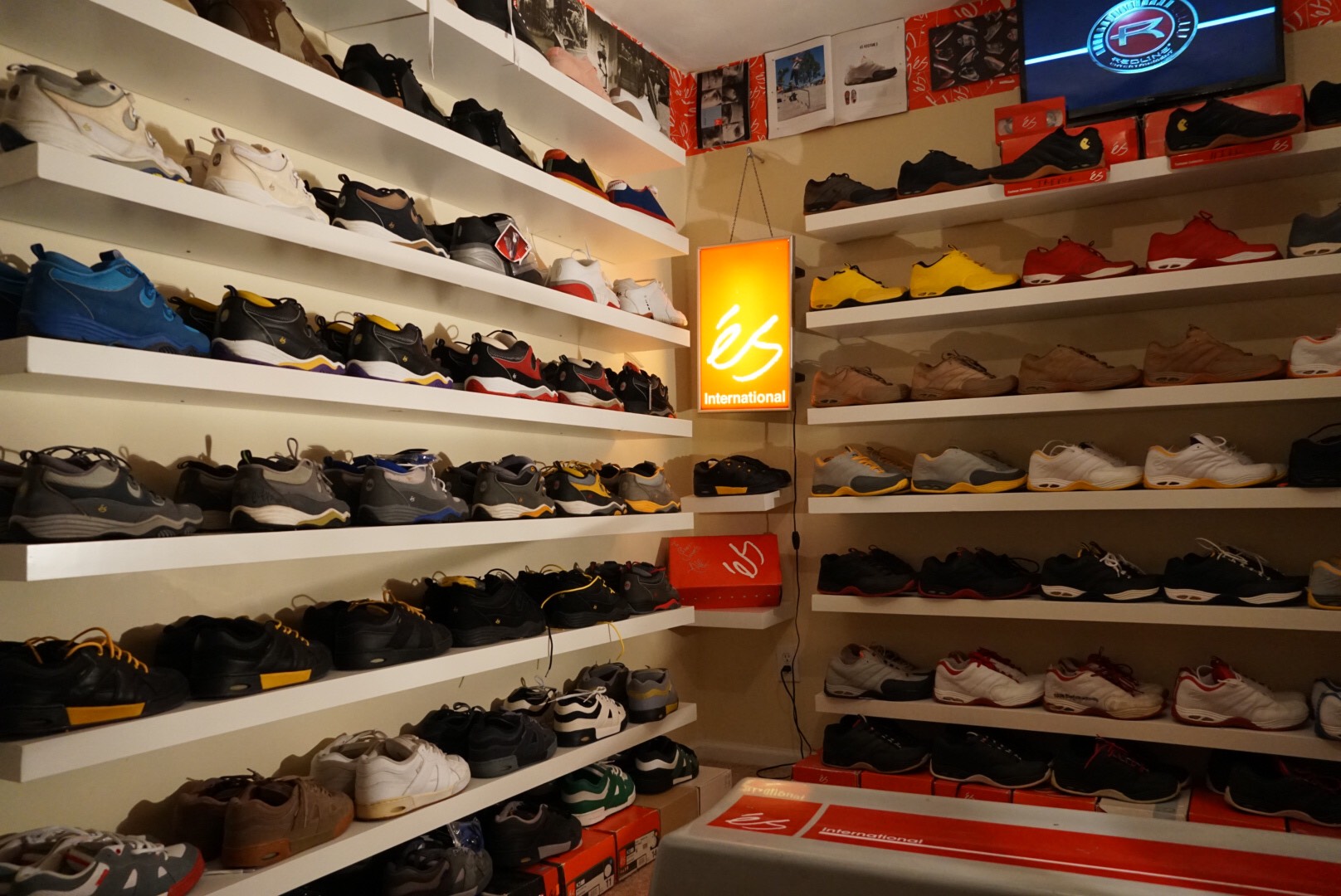 Skate gear collectors love to brag about how their hoarding takes over their lives. But the guys behind Chomp On Kicks, an account dedicated to forgotten shoes from the early 2000s golden era of skate footwear, really do spend an unhealthy amount of time buying, storing, and caressing old skate shoes (especially considering how aesthetically unappealing many of the shoes are).

However, always curious to shine a light on skateboarding’s diehards, we reached out to the three guys behind Chomp and asked them to pick out their favorite pieces from their collections.

Some of these shoes are rare gems, made with prototype/unreleased materials or from extremely limited runs. Others are an inspiring reminder of the unorthodox things that skateboarders come up with when they’re given creative control.

Scroll on to relive a simpler time when skate shoes could never have too much tech or too many logos. 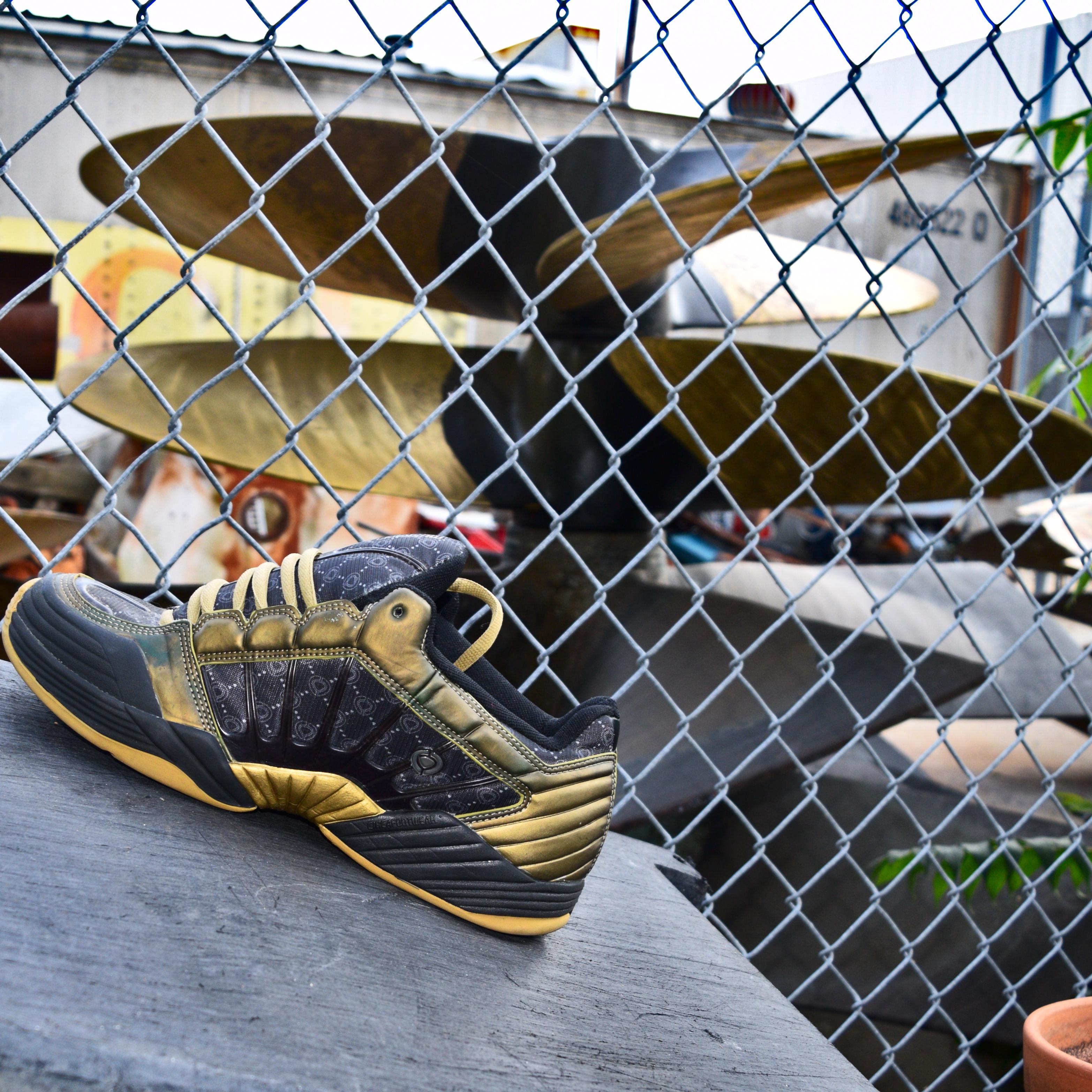 C1RCA CM802
Release date: 2001
Designer: Niko Achtipes, Dustin Deardorff, Chad Muska
I got this pair when I met Chad in Hollywood while I was on vacation. I DM’d him because I wanted to get a picture of the ledge he lipslides at the end of his part in Fulfill the Dream. He responded and helped me find the location, then said it would be cool to meet up.

I was sitting there [in this parking garage] waiting for him, just doing kickflips, and I end up getting stuck in the tar and falling over. As I was falling I was just like, “Oh shit!” I didn’t even get a second to get nervous because I just saw him walk right up. He was like, “Hey, how’s it going? Mr. Chomp On Kicks, is that you?”

We were just sitting there shooting the shit talking about how shoes these days hurt your feet and are really simple and lightweight. We were talking about how his 802 model was the lightest shoe and he pops his trunk and starts pulling out pairs. He tossed this one toward me and was like, “That’s you, homie.” 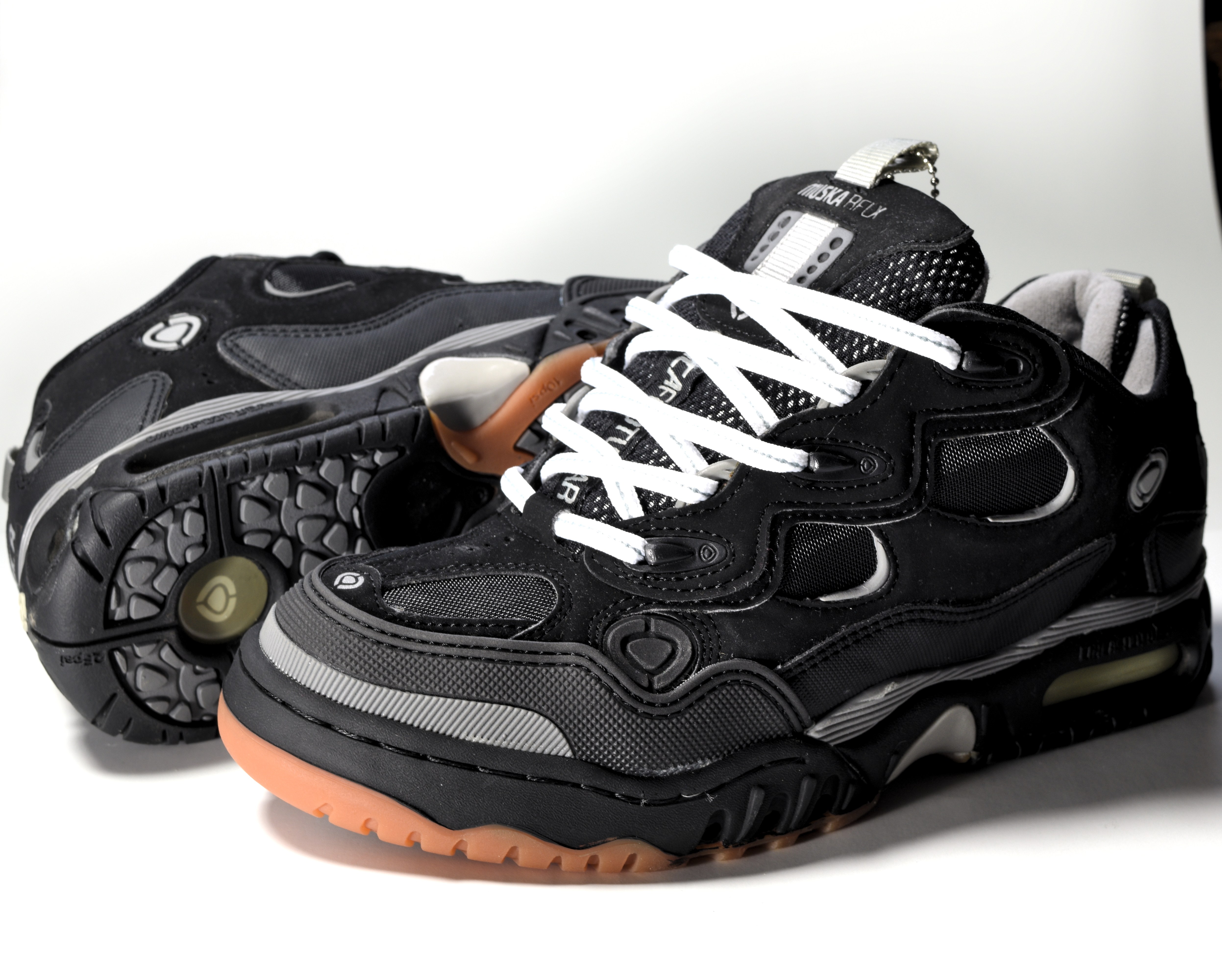 C1RCA CM901
Release date: late 1999
Designer: Niko Achtipes, Chad Muska
This was Chad’s first model on C1RCA. The first production pairs had plastic mesh on all of the ventilation. The plastic would fray and tear after a few times of wearing. I was told by the designer that it was a mistake from the factory and a lot of pairs were returned. This black pair is a super early release with the plastic mesh. I love the rarity.

This particular pair was acquired through Lance Mountain. He was selling some shoes that he had stored away. There was a pair of éS Koston 2s that I was interested in. There was a mixup and he sold the pair to another collector. I was super bummed out so I asked If he had anything similar. He replied that he had a pair of C1RCAs that I may be interested in. When I found out they were 901s, I had to get them as soon as I could. 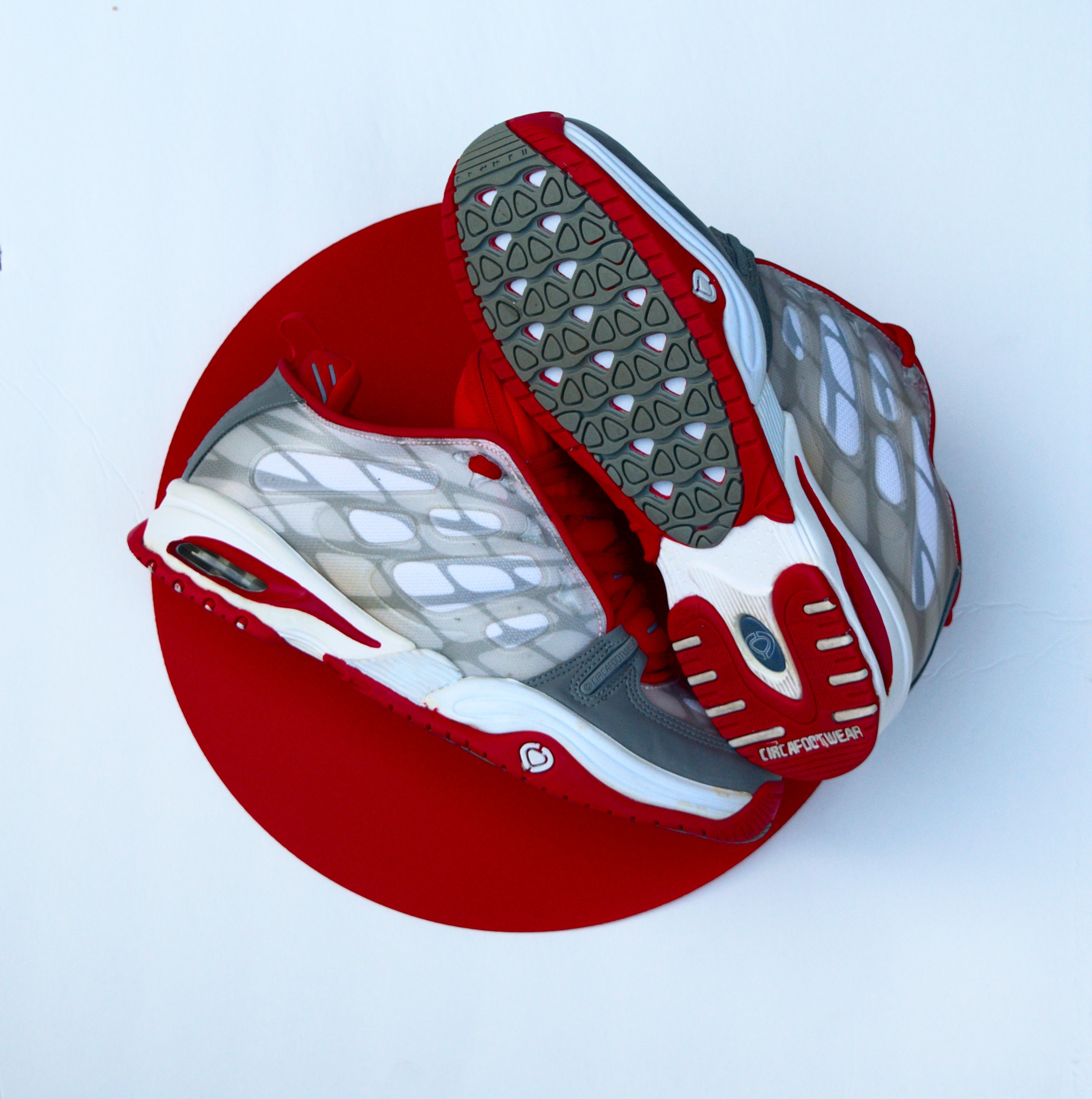 C1RCA CM902
Release date: 2000
Designer: Niko Achtipes, Chad Muska
This was Chad’s third model on C1RCA. Very similar to other C1RCA models. I think it was a time in skateboarding where every brand was trying to make the claim that it had the most advanced shoe, so when the 902 came out and it had plastic on the sides, that’s what drew me to it. It’s like the weird Air Max type tongue with plastic on the side.

I was this corny white kid, and when I wore those I felt better about myself skating. Back then I got so much credit from the weirdest groups of people, like, “Alright, that kid has got some serious shoes right there.” 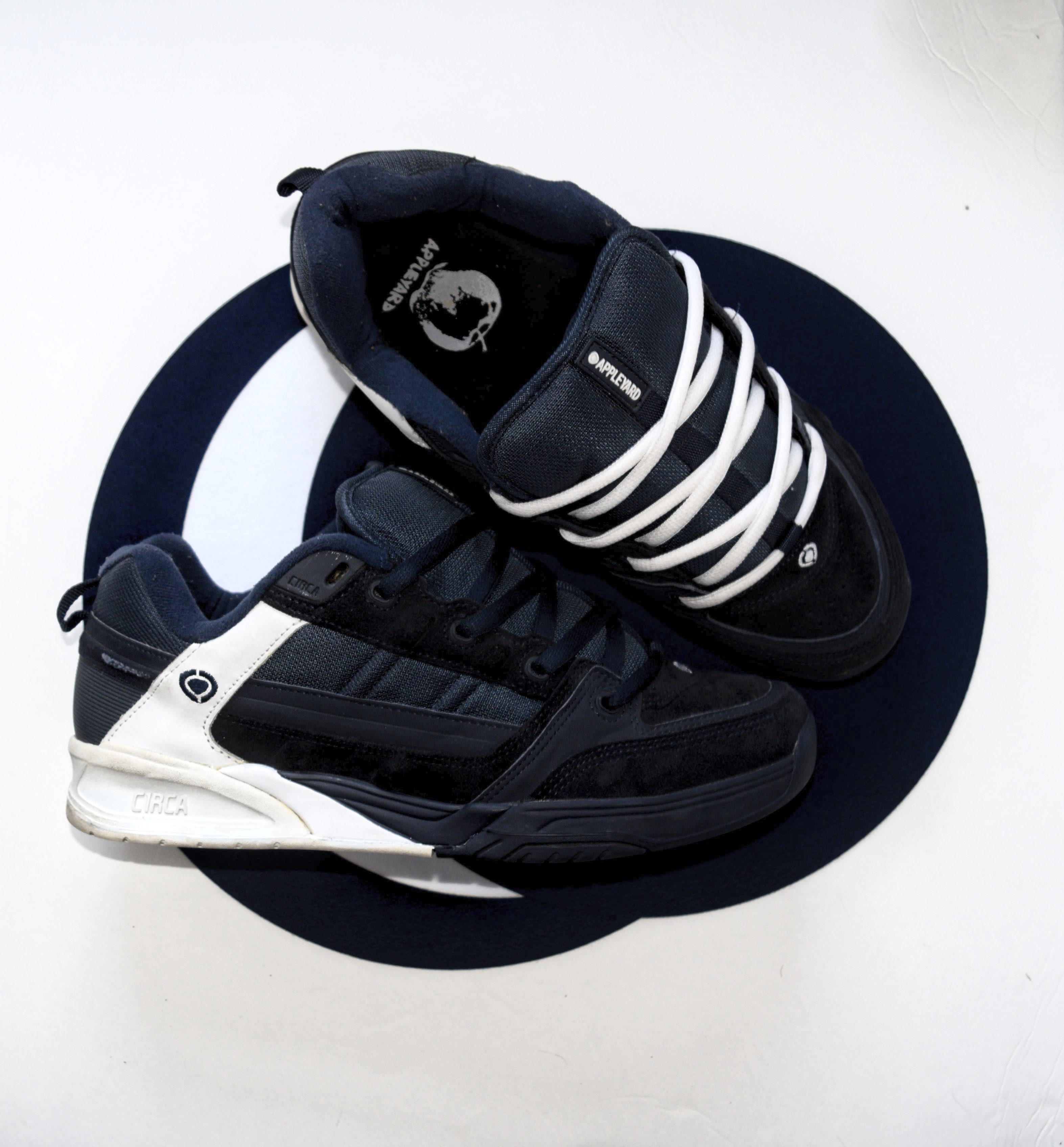 C1RCA MA402
Release date: 2001
Designer: Niko Achtipe
This was Mark’s first shoe on C1RCA. I had a few pairs of these when I was younger. I was randomly included in a DM with Mark and he was hyped that I was a collector. He was like, “I have a couple of pairs if you’re down to grab one. I’ll sign it if you want.” I was fanboying out. This pair was like $100, so it didn’t really break the bank. I asked him not to sign the actual shoe because the suede will eat up the marker and bleed in over time. I asked him to sign this little paper cardboard insert from the shoe instead. 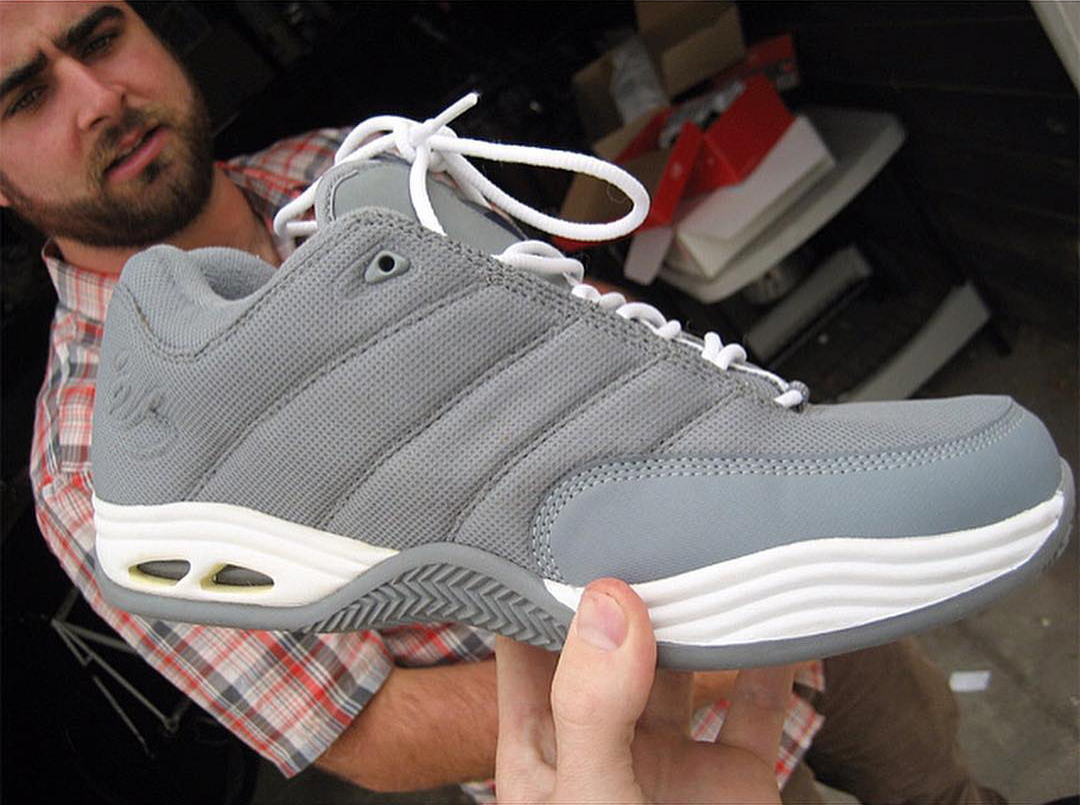 éS Koston 3 (Unreleased sample)
Release date: 2000
Designer: Franck Boistel
This gray/white mesh one-off K3 sample was used for catalog photo shoots. Years ago I saw Scuba Steve showing off this pair on the éS site, he was cleaning out his garage and holding up this sample. A month or so ago, I saw a pair on eBay and thought it was just another gray and white K3. I just put in an offer before I went to bed, and then when I woke up the next day it had been accepted.

Then I recognized the dude’s name who was selling it was Steve, so it was like wow, this is that exact sample I saw a hundred years ago on the éS site. Scuba apparently got them directly from Koston. 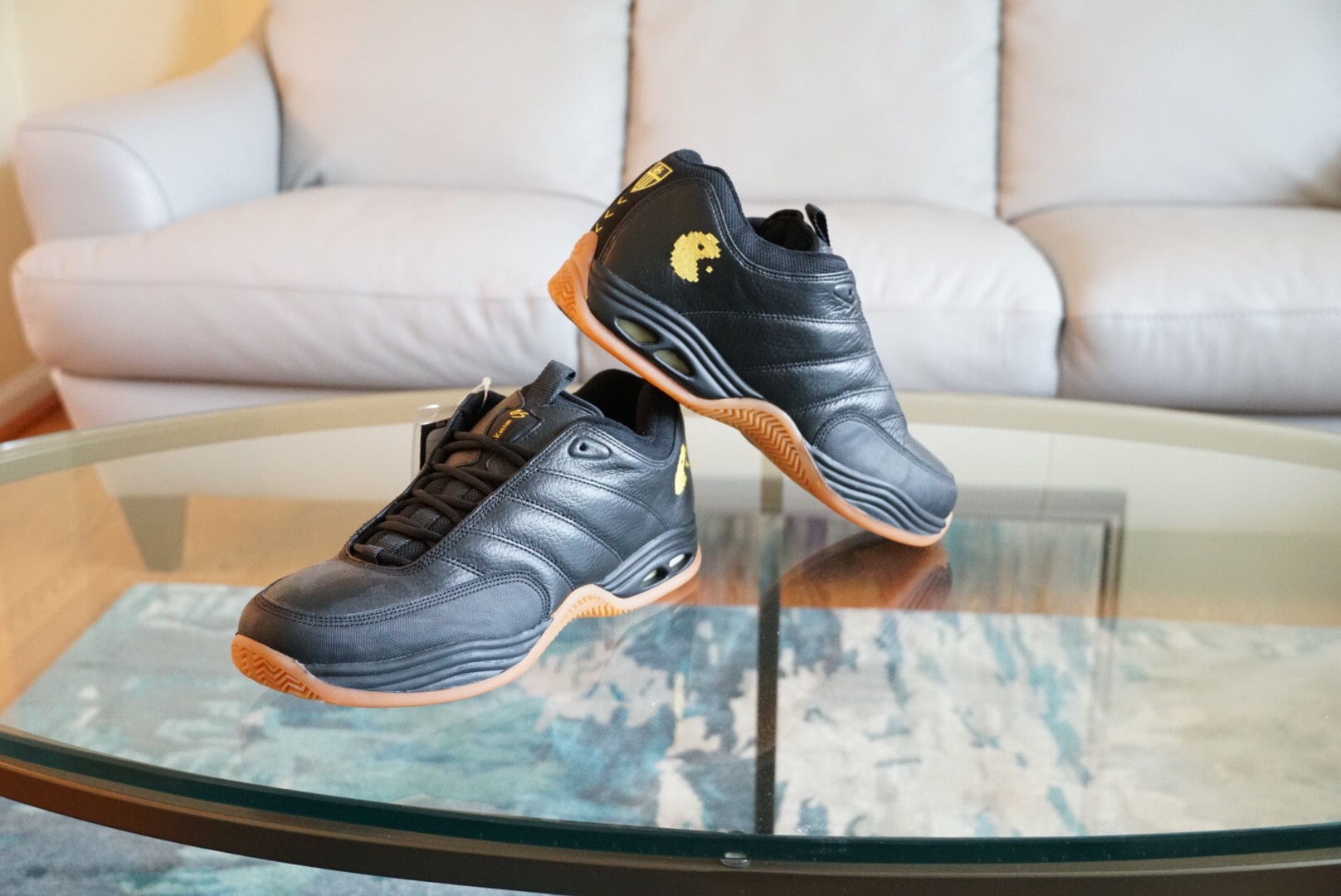 éS Koston 3 (Chomp On This colorway)
Release date: 2000
Designer: Franck Boistel
The Koston 3 was dropped during the holiday season in 2000, around the time Menikmati was released. A special sample was dropped in conjunction with Chomp On This. PAC-MAN had already issued a cease and desist order on the use of their logo, so very limited quantities were produced. It was somewhere in the range of 14 pairs.

This dude in California found a pair of these in a thrift store, and initially we talked on Instagram and I lowballed him and offered $300. He was like, “Nah, that’s too much money. Let’s do this for $120.” So I sent him the money. Then he said all this crazy stuff, like he had to give someone gas money to get him to the post office, but then he didn’t have enough money to ship the shoes. I found out he’s a drug addict, and throughout everything he was telling me, somehow the shoes were destroyed. I don’t know what happened but that was upsetting. There are 19 colorways of this shoe and I had 18 at the time.

Shortly after, this guy Dave who worked at Sole Tech back in the day hit me up saying his friend Trevor had kept a pair on ice for 16 years. 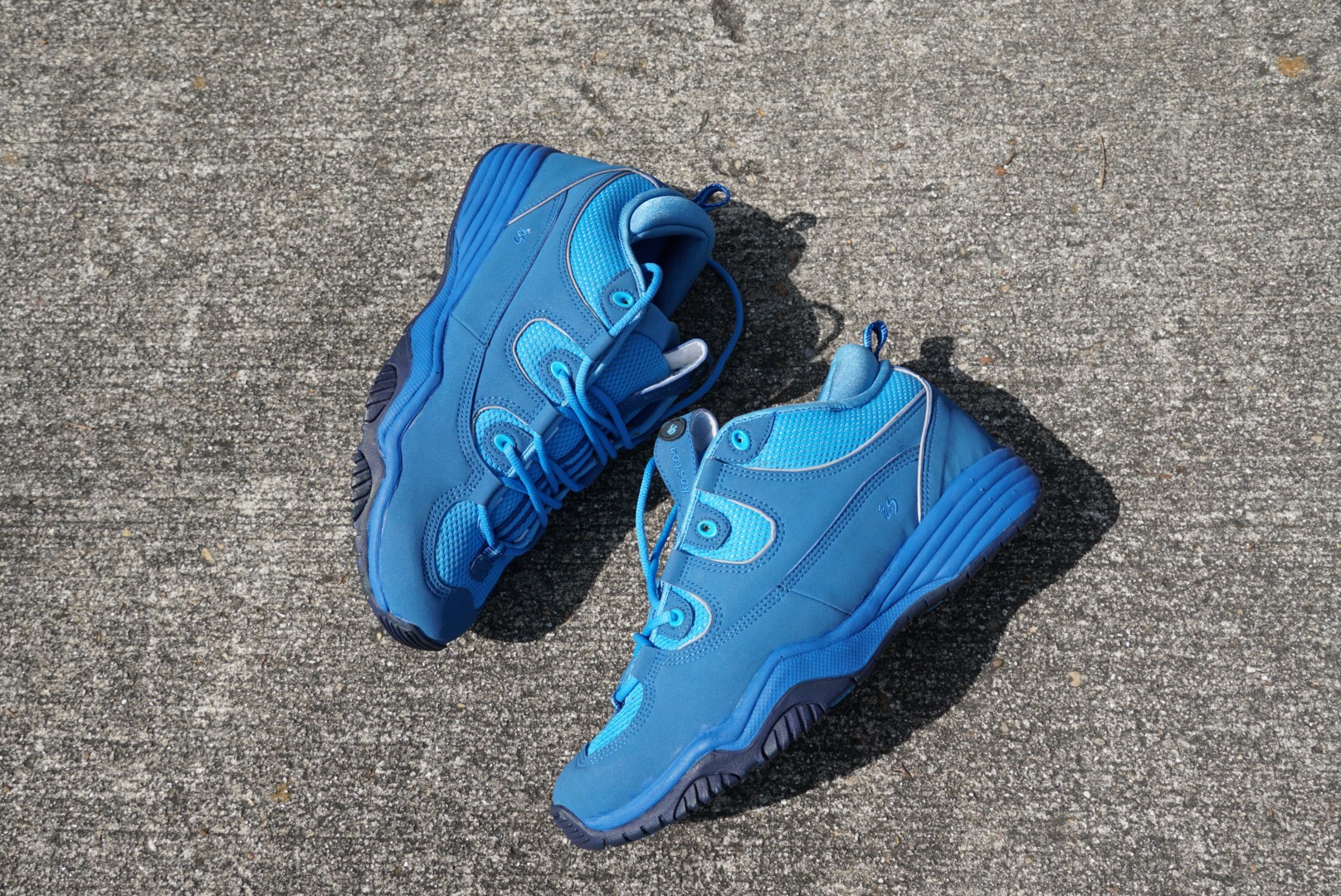 éS Koston 2 (Electric Blue sample)
Release date: 1998
Designer: Franck Boistel
I bought this electric blue K2 sample from my friend who had snagged them from a Sole Tech designer. I skated Love Park with this guy before it was destroyed and he scattered his friend’s ashes there because they apparently had always dreamed about going to Love together, so that was cool to have a session with a collector dude and skate Love Park. 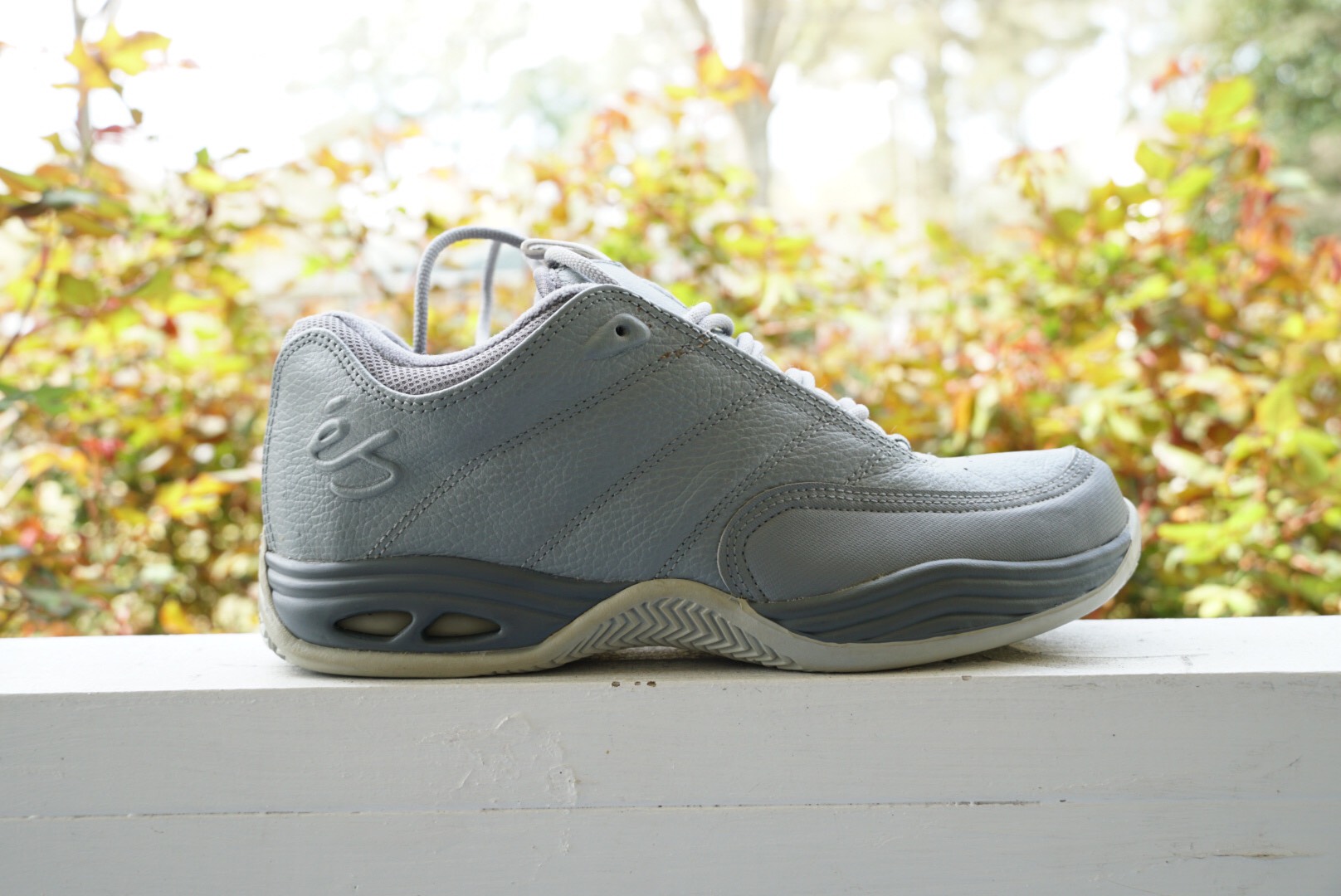 éS Koston 3 (“The Ghost”)
Release date: 2003
Designer: Franck Boistel
The gray/light gray K3, aka “The Ghost”, was released in Spring 2003. It was an official éS catalog release, but no one in the community of skate shoe nerds had actually seen a pair. A skate shop in Barcelona randomly posted a picture of a pair owned by their friend Ivan. Ivan had been a Sole Tech rep for years. It took me a year of increasing offers to finally convince him to sell. This is my favorite pair in my collection. 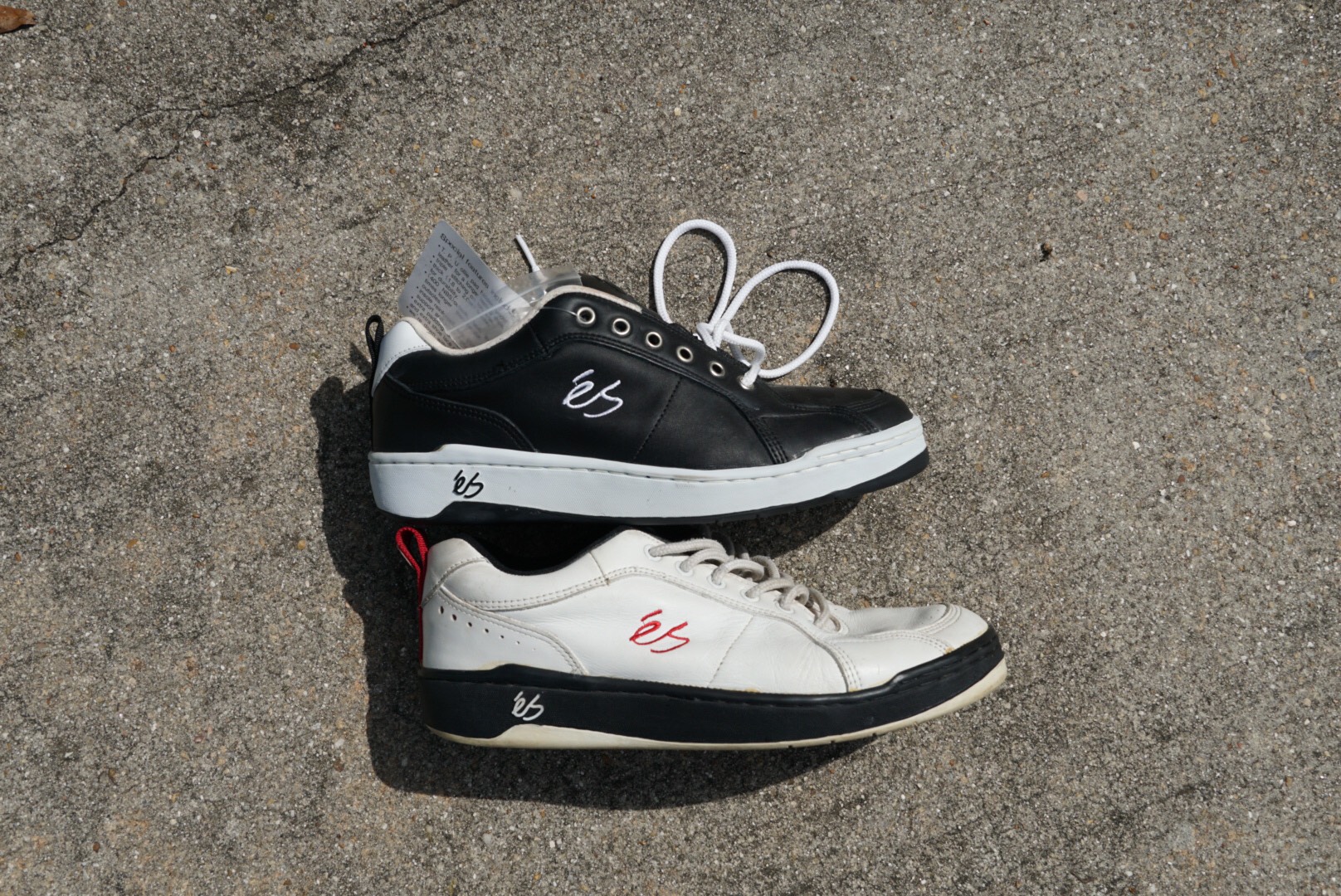 éS Aura
Release date: 1995
This shoe was in the first line of éS kicks. It was actually the first pair of éS shoes I ever saw. My friend and I were going to skate this little spot we had down the street and he was rocking them and I was like, “Wow!”

Shoes have really transitioned over the years. The focal point used to be skater-owned types of entities, Sole Tech, DVS, Lakai, all those. These skateboarders that I grew up watching, they had their own companies and built the skateboarding market. Over the last years, the shoe market has gone in a different, more corporate direction. I look back at these shoes and they are the purely historical point that is just skateboarding. It’s not intertwined with golf, it’s not a basketball brand, it’s 100% skateboarding. 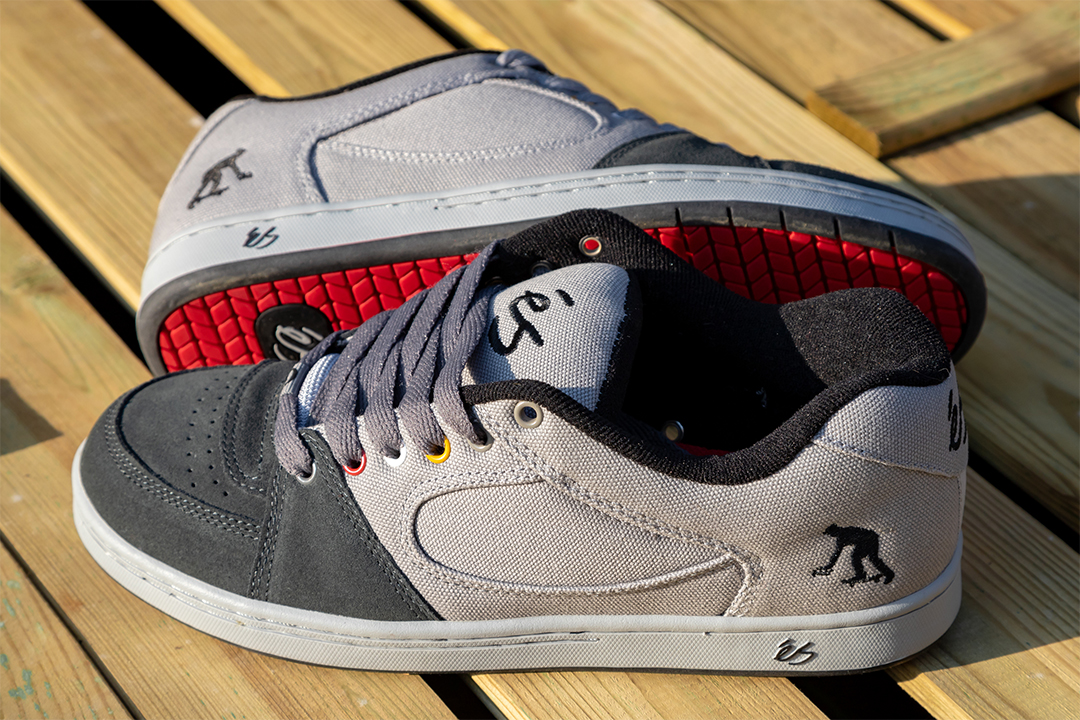 éS Accel Scuba
Release date: 2007
Here we have the éS Accel Scuba Steve, displaying the filmer logo in the heel and the yellow, white and red RCA output eyelets. Apparently, the Scuba Steve model utilizes a softer sole designed to eliminate the screeching sound of rubber when dragging your foot while filming. I cannot tell you if that is true since I just got the chance to find these in mint condition a few months ago and I’m not ready to wear them.

These are special for me because I’ve always been the “filmer” among my skate friends. 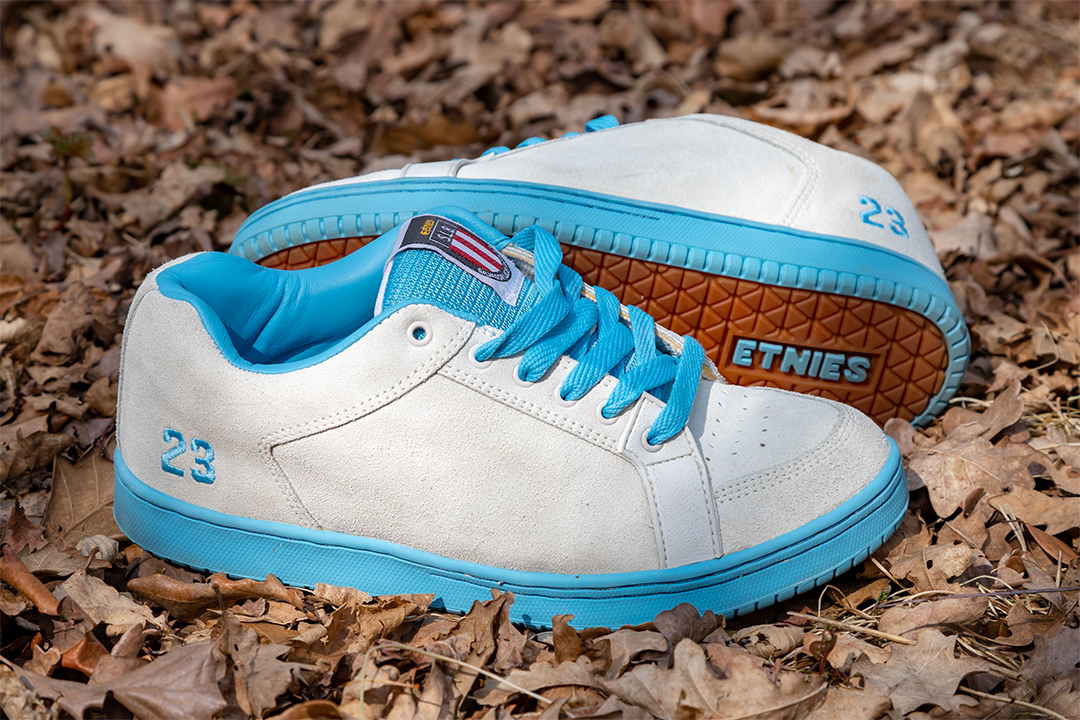 Etnies Sal 23
Release date: 2001 reissue
The Sal 23 is probably my favorite shoe of all time and it’s difficult for me to pick out the best colorway, but you can say these white/baby blue and the white/black ones are in my top three for sure. I try to focus my collection on finding all colorways possible but it took me a long time to find these baby blue ones in my size. 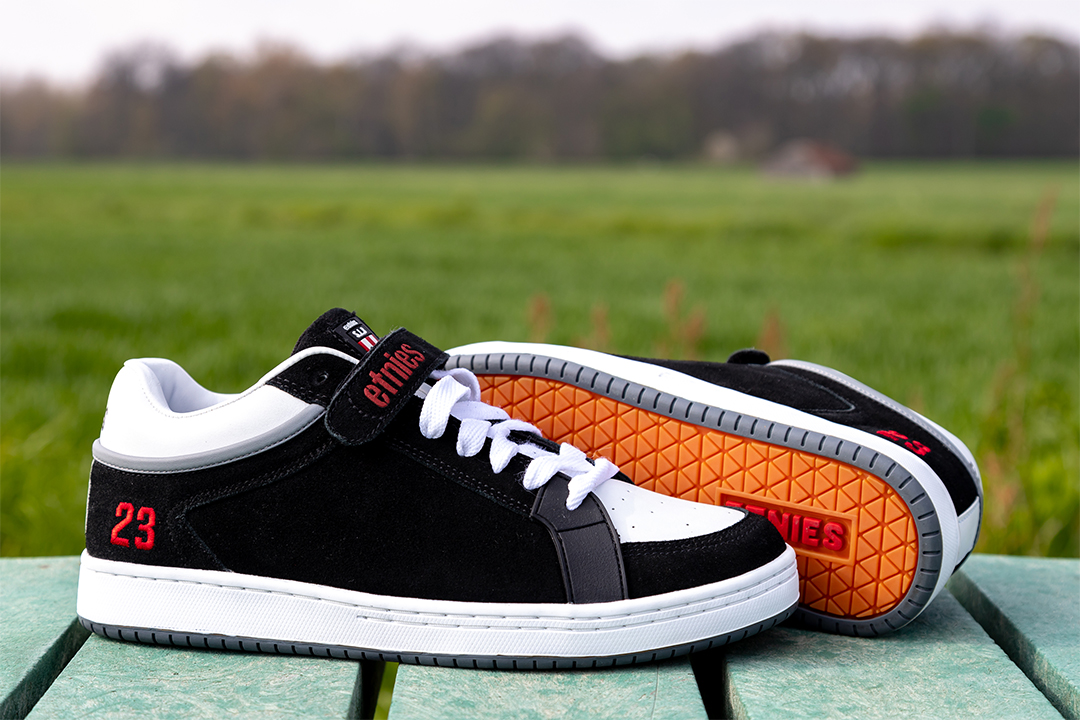 Etnies Sal 23.5
Release date: 2004
This is a variation of the original Sal 23 with a velcro strap that we don’t see too often. I think these are rare to find because they were made for just one season in limited colorways. I have other colorways of the regular Sal 23, but so far this is the only 23.5 that I’ve managed to find in my size and this condition. 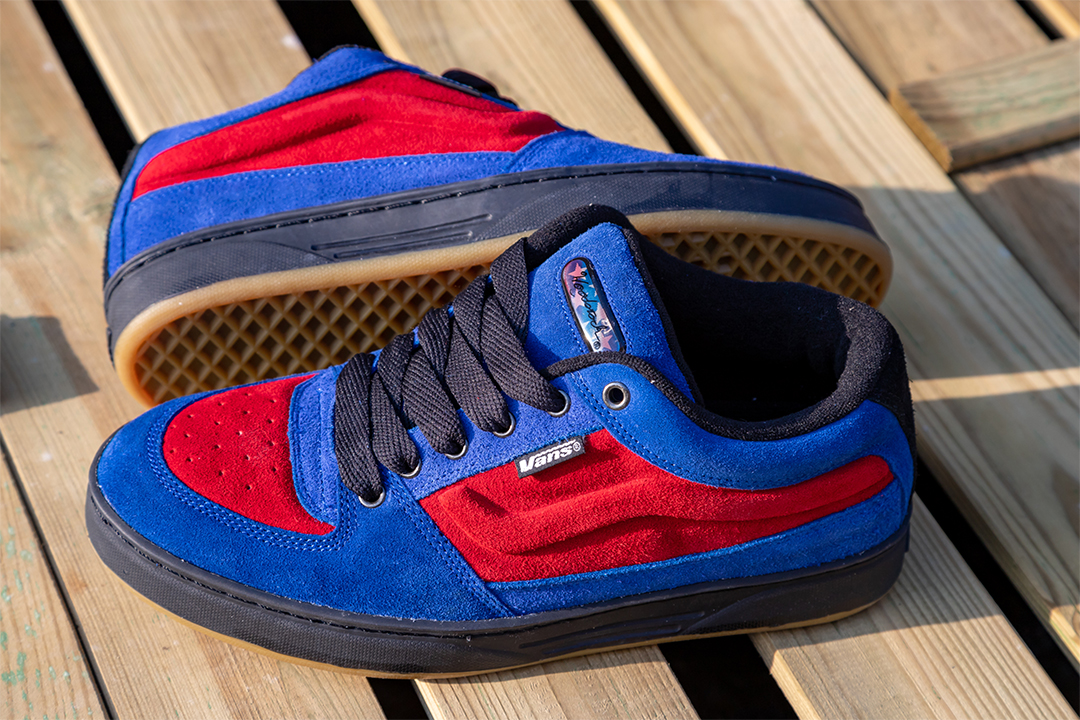 Vans Simon Woodstock
Release Date: 1997
When this pair came out it grabbed my attention because of the colors and Simon’s creativity in skateboarding.

In the words of Simon Woodstock: “We released them at a time when most shoes in the industry were white leather with white mesh and puffy tongues and fat laces. I wanted to intentionally buck that system with my red and blue ‘clown shoe’ with Vans. There were even some crazier colorways (blue with red and yellow, orange and purple, yellow and green) that were never released, but I think the blue and red scheme proved the point nicely.”