BUILDING SKATEBOARDING FROM THE GROUND UP IN UGANDA 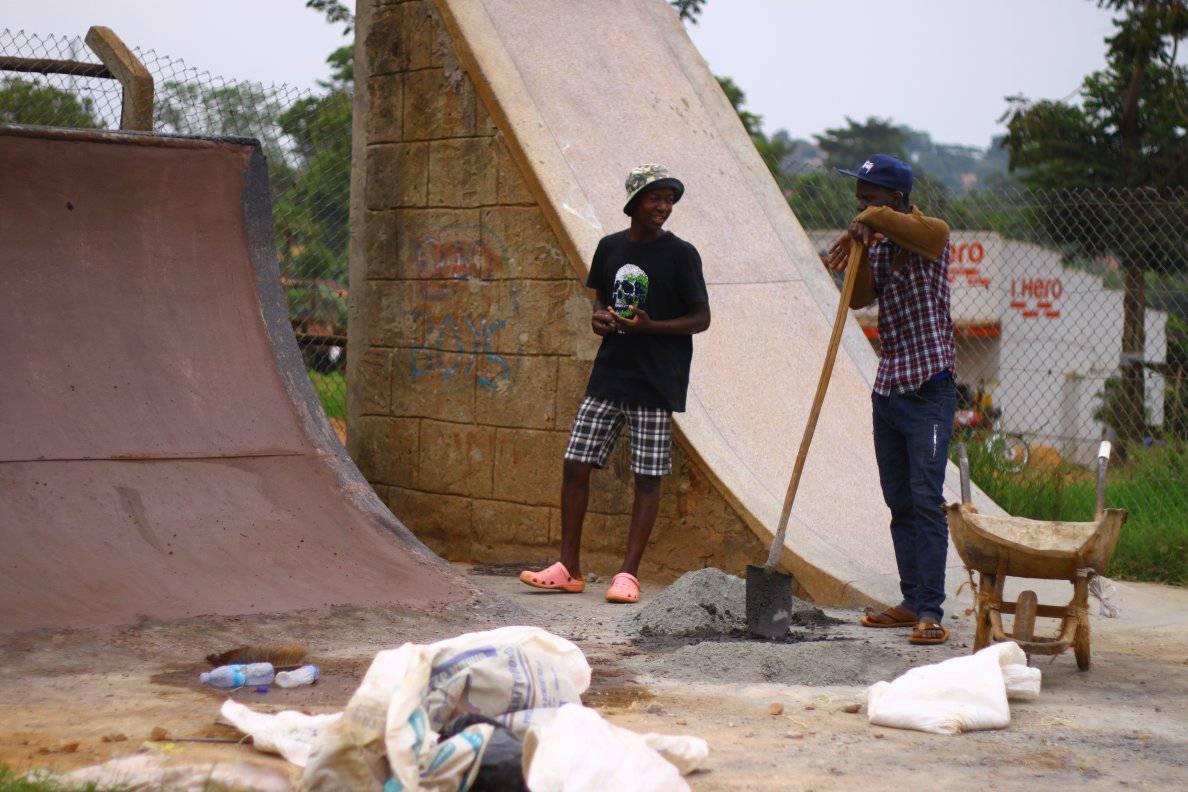 If you ever lurk #SkateTwitter, you may have stumbled upon the Uganda Skateboard Society. They’re spreading skateboarding in Uganda, one of the world’s poorest countries, mostly by building a skatepark and collecting and distributing hardgoods donations. All things considered, their progress looks amazing.

Their skatepark is pretty gnarly (i.e. it has a mini mega ramp) and they’ve consequently developed their own unique style on what even seems possible on a skateboard.

We’ve seen scenes develop in Nepal and Myanmar (which now has an Olympic skate team led by Kangol flow rider, Kenny Reed), but we’ve never known much about the challenges these communities face and how we can all help them grow.

We got in touch with 25-year-old named Gerald Gose, the guy behind the organization, to hear firsthand what it’s like to build a skate scene in a place where skateboarding had never existed before. 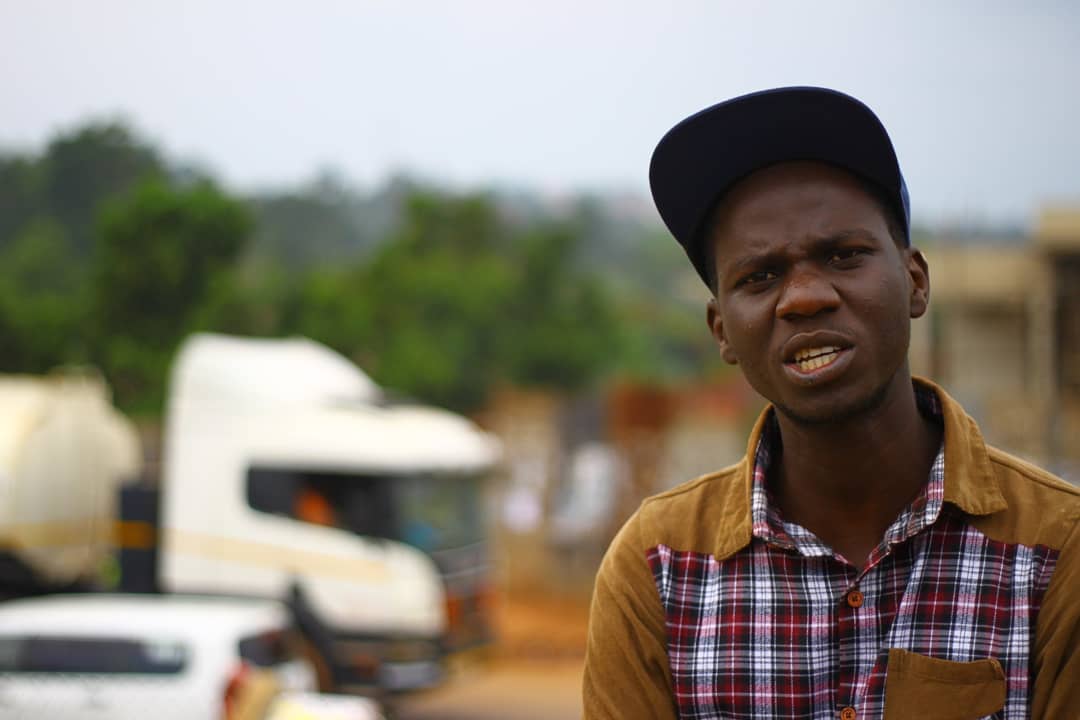 How and when were you first exposed to skateboarding?
In 2005 I came to know this guy named Bran Lye who had come from Canada to do some voluntary work with an NGO. He came with his skateboard and I got inspired by the tricks he was doing.

Honestly, I had never seen a skateboard before, not even on television, and that’s where I got all the inspiration from. He gave me my first skateboard.

I thought skateboarding was just a leisure game and I never thought it was this serious until I was introduced to the internet and social media and I got to know much about it.

When you started the Uganda Skateboard Society, what was its goal?
In 2011 my elder brother and I came up with ideas on how to grow the skateboarding scene here. We ended up joining the internet community with the intention of promoting our love of skateboarding to the entire international skateboarding community. We formed the USS and our main goal was growing skateboarding in Uganda through building skateparks. Skateboarding also gathers youth and helps them avoid being in bad peer groups that can lead to illegal activities.

Skateboarding has existed for the last six years in Uganda, but no one was there to promote it and get companies or individuals to come on board to make the youth more interested, so we decided to make it the DIY way.

“Skateboarding has existed for the last six years in Uganda,
but no one was there to promote it.”

How hard was it to get something like this started in Uganda?
We faced several challenges. For example, we were forced to open up postal addresses. We were most challenged by the heavy taxes the government implemented on the donations we were being sent by friends and fans to support the kids. That led me to pay for it using my own salary from work.

Have any brands or pro skaters reached out to you guys to help?
Skate companies have reached out to us and a few have promised and fulfilled things. With the local companies, they haven’t yet started supporting our movement. We had to join the social media community in order to get in touch with fellow skaters globally who would come out to support our movement.

Would you want help from one of the big skate charities (Make Life Skate Life, Skateistan, Tony Hawk Foundation, etc.) to build a skatepark, or do you want it to be fully DIY?
I decided to work on everything on our own. I used to try to get in touch with organizations but they wouldn’t respond back to us. I had a belief that Uganda was gifted with skateboarding from God, but no one would come to support our movement. After sending a lot of emails and texts I realized no one was gonna come from heaven to support us, so I jumped on the internet to grow our scene. I watched a lot of documentaries online of the likes of Tony Hawk and Lance Mountain on how they succeeded in their skateboarding careers, and I was forced to get online lessons on how to build skateparks.

In 2016 I started building skateparks with the help of our local skaters, especially the kids, though they weren’t so proper. Today we can create a proper miniramp or quarter pipe because we got enough experience. But we welcome any organization or individual who would have an interest in building a skatepark with us.

Does the Uganda government support you or skateboarding?
African governments do not take such organizations or sports so seriously, and our government has not been participating in skateboarding ever since we introduced it in 2005.

Are there skate shops in Uganda?
We have never had a skate shop since we started skateboarding in Uganda, we have been surviving on donations from friends, well-wishers, and fellow skateboarders from abroad.

Having a skate shop would ease the supply of skateboards with those who can afford to buy them from their local shops because right now it is so expensive to buy one online. You have to pay both the shipping fee and taxation fee, which makes it very hard to purchase one for kids.

How have you been getting funding to build stuff so far?
There was a partnership between a group of street artists, City of Talents, from France. They organized an auction and pledged to support a certain percentage of the profits.

Our skatepark was constructed in 2016, and after a year it was already damaged and had become too rough to use so we had to rebuild. This time around we realized we had to use terrazzo in order for it to last long. We have been working on the reconstruction up to now, our skatepark has cost something like $25,000.

Did you model the skatepark after any pre-existing parks, or was the design just off the top of your head?
We love vert and we like the way Danny Way and Bob Burnquist used to skate the mega ramp. However, we need to have a big piece of land to construct a mega ramp, so we came up with something like a small mega ramp mixed with vert. 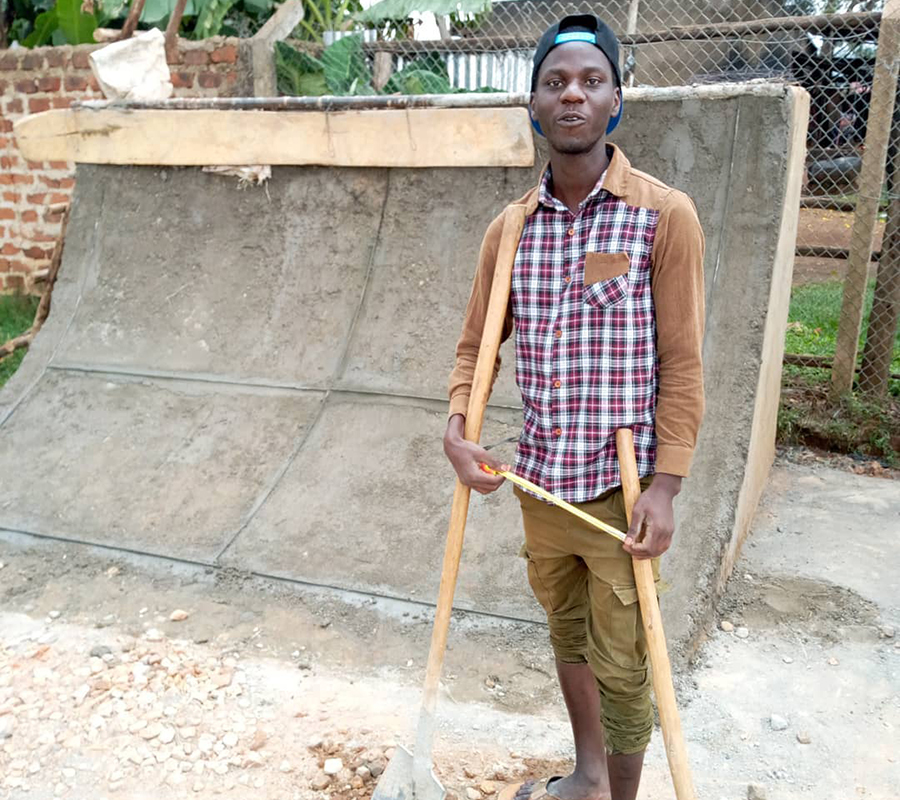 What’s schooling like over there? What kinds of opportunities are available to someone who graduates from the school?
Skateboarding is of great interest to kids in the ghettos because in Africa we are a bit divided. There are areas where the first-class families live and other areas where the poor live. Skateboarding was first introduced in my hood, which is totally a ghetto within the Kampala suburbs, and now it’s the ghetto properties that are in charge of growing it.

As skateboarding is in the ghettos, where most of the kids don’t come from economically stable families, most of them can’t afford to pay school fees, so few of them go to school. Education is losing value because whether you are educated or not there are no jobs in the country, so I see no big difference between a graduate or not.

As poverty rises in Uganda, can skateboarding offer anything to kids living in those situations?
At the beginning of this year, one of the parents from the kids who skates with us told me he needed support with taking his son Moses back to school. When we posted on social media that we were in need of someone to support Moses’ school fees for a term, most of our followers promised to donate. I came up with an idea of making a fundraiser to support two to four kids each year and I am likely to do that every January. I also started up-selling some branded T-shirts for our organization and we’ll offer a percentage to support these kids. That’s what we can offer for now.

What does your family think of skateboarding?
Skateboarding changed my whole family. Besides me, my brother is a pro skater who got sponsors and I have been sponsored by Mountain Dew for the past eight years. Right now our last born, Moses, is one of the best skaters and one of his videos went so viral because of his skills. So my family is proud of skateboarding. 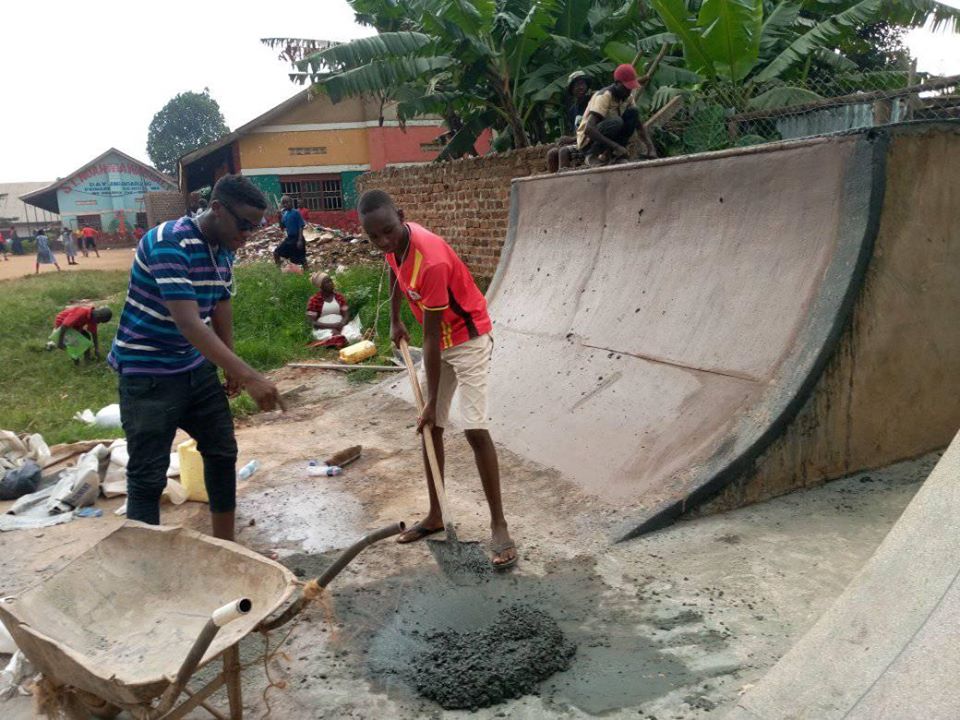 Do you think a Ugandan skateboarder will be in the Olympics?
Making it to the Olympics would not be hard, but the hardest part is the funding. When the qualifiers were going on we could not be part of them because we don’t have sponsors to support our team.

Uganda is one of a few African countries which are good at street and vert. I have been seeing a lot of pro skateboarders who have been sharing our videos on social media. Tony Hawk shared one of our videos and said kids in Uganda are doing things which have never been done before, so I believe we can qualify for the Olympics when we’re given a chance.

What’s the best way someone abroad can support the Ugandan scene?
We have been having a postal address which our well-wishers have been using to donate skate materials. Right now what we lack the most are decks and trucks.

What do you believe the future holds for the Uganda Skateboard Society?
I am seeing a lot of skateparks being built in the future through our effort because we are committed to growing the game regardless. I have hope that companies in Uganda will come on board in the future to support us like they are doing with football, basketball, and other games.