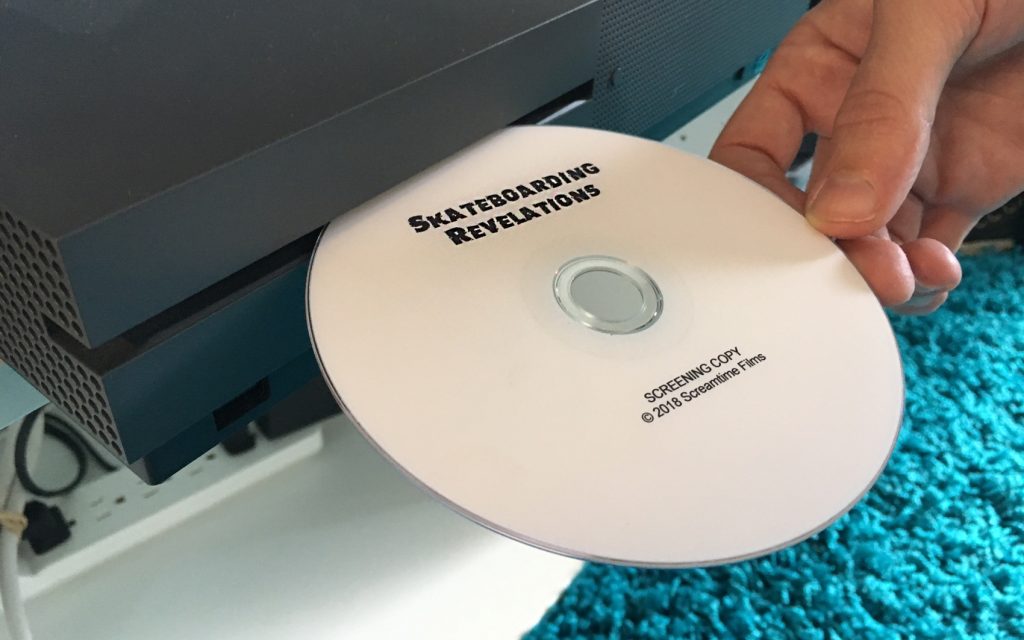 “Almost every single date of my life somebody’s either trying to tell me that I didn’t do what I did, I won’t do what I say I’m going to do, and I’m not doing it right,” Todd Falcon says in his new feature-length documentary, Skateboarding Revelations: Journey to the Final Level.

If you’re not familiar with Todd, the middle-aged bald guy inventing tricks on the quarter pipe in his garage, feel free to check out our interview with him. His technique is a blend of freestyle skating and Bones Brigade backyard ramp sessions or, in his own words, “a futuristic combination of Tony Hawk and Rodney Mullen.”

For those who know Todd, he’s a polarizing figure as skateboarding’s most known outsider. His relentless self-documentation has led to full-length skate videos and C-level horror movies. He’s been referenced in Tony Hawk’s Pro Skater 4, had his own company sponsoring a young Ben Raybourn, and claims to have invented over 3,000 original tricks – with names like the Zombie 360 Varial to FS Boneless Flippo to Primo to Miracle Flip.

If you haven’t heard of him, you’re in luck: all of this is woven into the sprawling story of his latest film Revelations.

“For some reason, skateboarding has always had this set of rules that skateboarders need to follow. I’m here to change that,” Todd says. “Art has never had rules. Why should you have to live your life like somebody else?”

Like most artists, Todd wants recognition from the mainstream. He hopes this film will get him into the good graces of the skate industry, which never embraced him despite his talents and lifelong devotion to skateboarding. Instead of stardom (although he was featured on a Big Brother cover), Todd has achieved a cult status and, in a way, Revelations tells a skateboarding success story – how an unknown individual found lifelong meaning by doing whatever they want.

“Skateboarding has always had this set of rules to follow.
I’m here to change that.”

Todd sees skateboarding, quite literally, as a video game with various levels – each brought on by the discovery or invention of a new “root” trick. A “root trick” is a trick, often invented by Todd, on top of which other tricks can be added.

Other tricks are derived from pre-existing skate basics, like the “Boneless Flip to Falconplant to Whammy”. The possibilities are endless, and only Todd knows when a root trick has reached its potential and he can advance to the next level.

Todd’s obsession began when he was 12 years old and rented The Search for Animal Chin from a local video store. After popping in the tape, a voice appeared in his head and told him his life’s goal: to invent 1,000 original tricks, reach skateboarding’s final level, and find the holy grail root trick, all while documenting his search.

He relays this anecdote with such a straight face that it’s hard to tell if it’s the rantings of a delusional madman or, more likely, a story his 12-year-old brain cooked up for fun. No matter his reasoning, Revelations is that film, which he’s been meticulously recording for 34 years.

Through a strong sense of self instilled by his family, Todd developed his signature style of skating to the point where he decided to add “Falcon” to the end of his name, Todd Jason Cook, and hopefully be seen as a Tony Hawk-level talent.

Todd complicates the movie’s whole endeavor with trippy graphics, low-budget visual effects, and endless demonstrations from his inexhaustible list of tricks. Psychedelic sequences of him skating in his garage attempt to build a secondary plot to the main thrust of hunting for the final level, but these elements end up making the movie like one of his tricks: hard to comprehend and unexpected at every step of the way. They become a fever-dream of skateboarding mania.

He narrates his story in a drab documentary-style talking head format, and tries adding drama by packing it with obvious foreshadowing, suggestive still frames, and laugh tracks. They don’t amount to the dense narrative he’s going for, and instead distract from the film’s true centerpiece: Todd’s incredible body of work; the thousands of videotapes, cassette tapes, and CDs he’s recorded of his life.

Among them is Todd’s earliest skateboarding footage which, at times awkward and raw, has a clear resemblance to a young Tony Hawk – assured and strategic, yet loose and powerful – ripping backside airs on big janky vert ramps, not just his little driveway quarterpipe.

Revelations is a feat of gonzo media-mixing and a autobiographical portrait of an artist. The main relationships in his movie are mentioned mostly to set the scene and act as punching bags to bounce his character traits off of, not to examine the reality from where he created his art.

Interviews with Todd’s fans and friends are peppered throughout, and I hoped they would answer my questions about his life. However, they mostly praise his ingenuity and individuality, of which he has plenty. We get a deep dive into Todd’s mind, but not at his potential influence on skateboarding. This portrays Todd as one-dimensional – not completely delusional, but not looking at the whole truth.

Finding the final level may matter to Todd, but it didn’t matter to me. When we learn that the final level and holy grail root trick are together, a “Falcon Ollie,” in which you ollie and land on your front foot, I didn’t care. By this point, the movie has repeated itself too many times to live up to its 130-minute runtime.

That younger generations of skaters keep discovering Todd’s oeuvre suggests there’s something substantial to his skating and overall message. When he began his lifelong quest for the final level, he was an outsider among skateboarders, who were already outsiders among society.

A figure like Todd wasn’t meant to last, and yet he’s never truly faded away. He’s kept true to himself and continued popping up through all of skating’s modern iterations, releasing this film into an industry that now has audiences for brands like The Friend Ship and Fancy Lad Skate Co and people like Richie Jackson – which all pull a little something from Todd’s DNA.

Although I doubt he will ever get the Todd Falcon’s Final Level skateboarding video game he desires, there might be more room for someone like Todd in skating. With spring-loaded board contraptions, endless body varials that rival some of Todd’s least tasteful moves, and any manner of no-comply tap-dancing that racks up views by the tens-of-thousands on social media, why not? Todd already had a body of work long before people were matching their hair to their grip tape and doing ugly skate ballet.

If you want to get weird with it, why not watch the original skateboard freak do his thing? It doesn’t really warrant a two-hour-plus feature, but if that’s what it takes to keep Todd around, fuck it. I’m down.