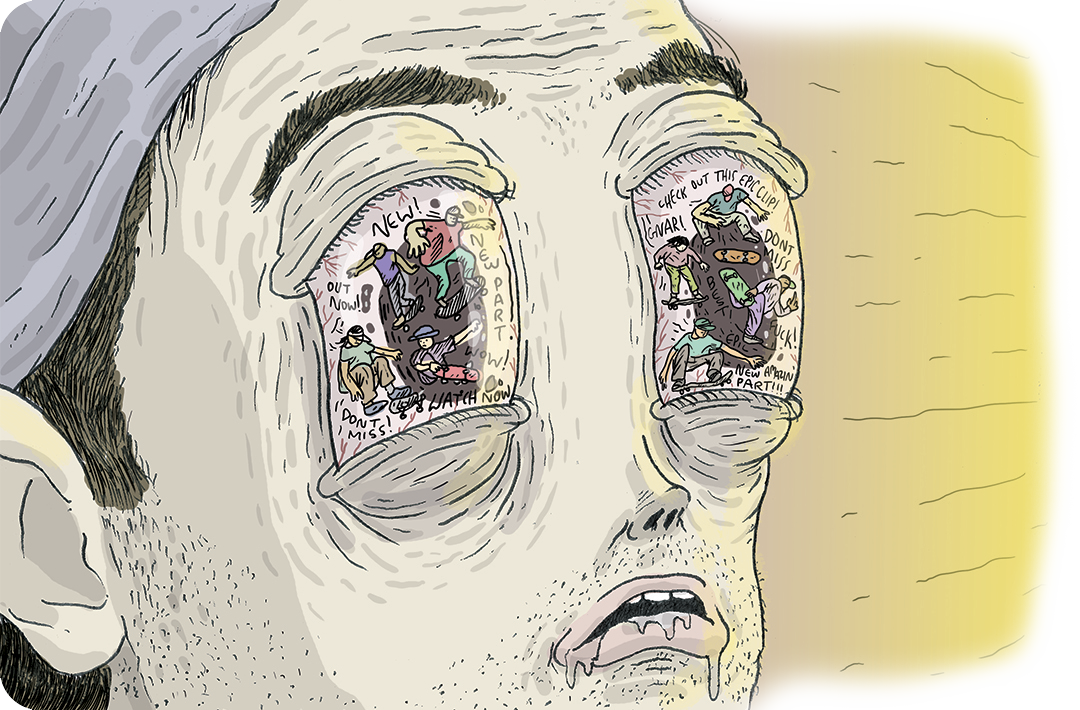 The routine is all too familiar. You log on to your web platform of choice to get your skate video fix and queue up the day’s hot new parts. The clips start to play but soon your attention dwindles. By the time the 20th trick is flying by – followed by another, and another, and another – nothing’s really registering.

What is there to gain from this type of daily intake of skate parts? You aren’t likely to fall in love with a new person’s skating. You won’t get inspired go to your local spot and try a trick you just saw online. You’re certainly not rushing to the shop to buy the latest pro model from whoever’s part you watched that day.

A new skate part was once the most powerful marketing tool for moving product and growing recognition. It also regularly moved skateboarding forward by showing us never-before-seen tricks and new approaches and styles. Now, it’s devolved into the equivalent of a sign twirler dancing on the corner, competing for people’s ever-diminishing attention spans.

I’m not saying skaters should no longer film tricks. Sponsored skateboarders should always be filming, and many of them should film much more than they currently do. But pros shouldn’t rely on video parts as their bread and butter, because if you dedicate a full eight months of your life to something that will be buried in a news feed overnight, you completely misunderstand today’s skate economy.

The most valuable currency in skateboarding today is what we like to call “The GIFable Moment”. If you want the video part you worked so long and hard on to be even remotely relevant, you need a minimum of one (1) clip that can be extracted and disseminated throughout social media.

Given the speed at which content is released these days, if a clip doesn’t rack up likes, retweets, reblogs, and reposts all across the internets, it basically doesn’t exist after two days.

While a part may only be three minutes long, it’s still not as easy to share or consume than a clip that’s only three seconds.

These simple clips are quicker to come by on your various feeds and require no commitment from viewers. By the time you figure out who’s in the clip or what the trick is, the clip is already over, whereas a full part might take just as long animating the skater’s name across 16mm footage of pigeons. And since each day brings so many new parts, you’ll likely watch any given part once and never come back to it.

But GIFable Moments have a built-in rewatchability. It’s these unique, iconic, creative moments that we can revisit with ease that will make today’s popular skaters into tomorrow’s legends.

But what if your skate skills are just mediocre and you can’t come up with a good GIFable moment? Don’t worry, your career won’t end over a lack of reposts. There are other ways to solidify a lasting and influential skateboarding career that pack more of a punch than releasing a banger part.

Owning a fledgling clothing brand, hosting candid sit-down interviews about personal struggles, vlogging about hobbies outside of skateboarding, even competing in Street League can bring you more meaningful exposure than a new part. Of course you can’t rely solely on these tricks. You have to release some real deal street footage to avoid becoming an unmarketable kook, and full parts definitely fit that bill, but if you can possibly squeeze it out of yourself, a GIFable moment requires less investment and generates a way higher return. All you need is a unique or good dork trick filmed in a parking lot and posted straight to Instagram. No video part required.

“If you dedicate a full eight months of your life to something that will be buried in a news feed overnight,
you completely misunderstand today’s skate economy.”

Bottom line, skate companies would be doing themselves a major service if they figured out the value of being conservative with their footage output. Careful curation is one of the most important skills today, and while a constant output of parts might have been considered a major plus just a few years ago, the methods of media distribution have outgrown and outpaced skateboarders’ ability to film parts.

Skateboarders need to recognize they must reel in the urge to get all their footage out and reimagine what “output” looks like in 2018, or else bury themselves in the oblivion of an endless stream of content.