RODNEY MULLEN & CREW FOR THE UNEMPLOYABLE BOOK PARTY IN NYC 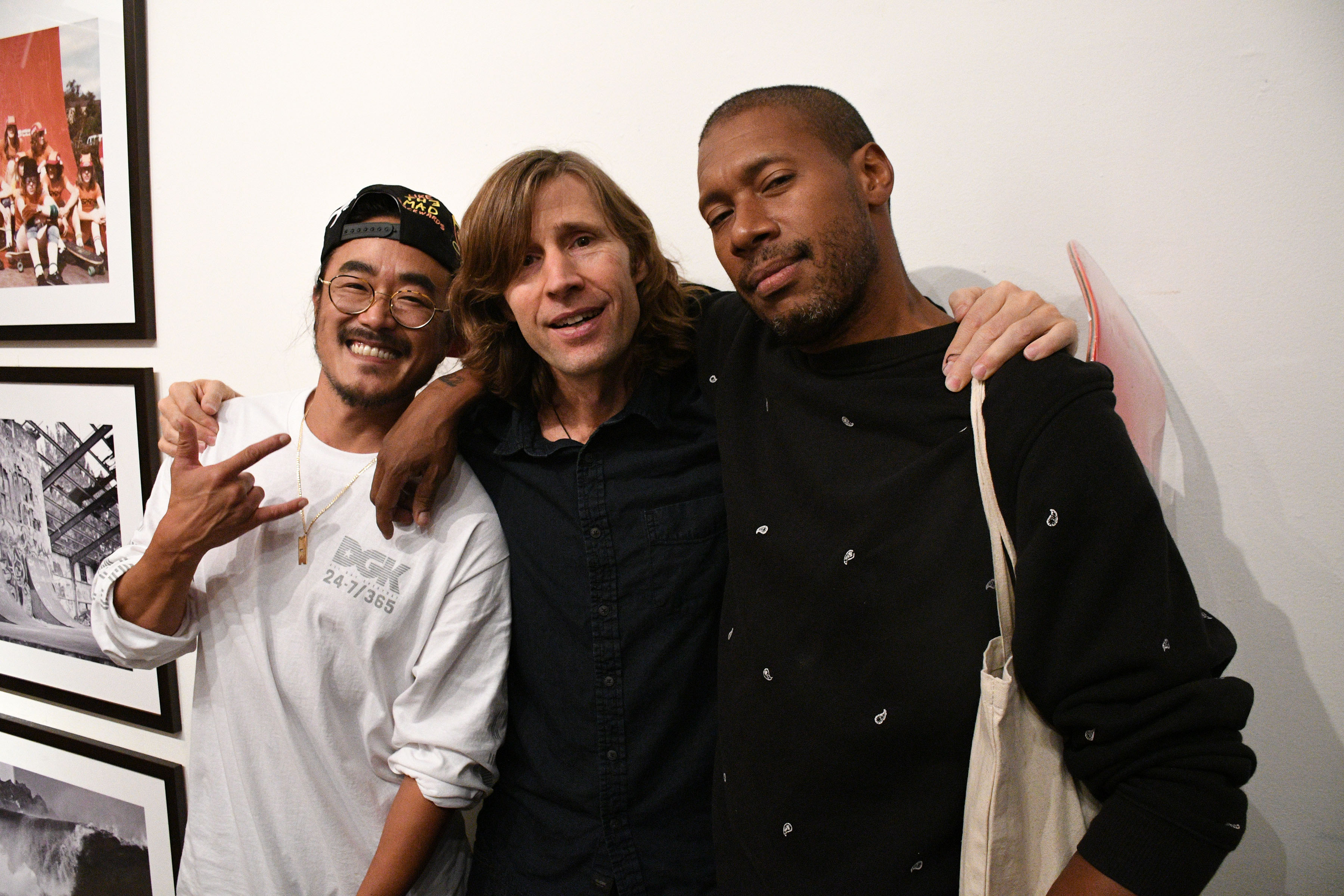 Professional skateboarding and brains don’t usually go hand in hand. That’s not because skateboarders aren’t intelligent – many are – it’s just that we don’t demand that from them. Lots of pros are coddled from a young age, and the brands that sponsor them usually make sure to take care of them – hiring TMs and brand managers to make sure they get to demos on time and ensuring the skater can get the maximum output (footage, photos, demos) for the brands without getting caught up with hassels like logistics or day to day problems.

That’s why Rodney Mullen has always been a favorite of mine. It might sound trite, but Rodney has always been an innovator on all fronts: inventing modern skateboarding (no big deal), helping create the modern skateboard shape, and being a pioneering part of how successful skate businesses operate. It’s only now that some of the world outside of skateboarding is catching up to his genius, asking Rodney to do TED Talks, asking him to donate his board to the Smithsonian and even asking him to weigh in on the future of tech.

So when I found out that Rodney would be around for the Unemployable book party in NYC, to celebrate 30 years of Globe, I wasn’t gonna miss out on an opportunity to hang out with one of the greatest brains in skateboarding. 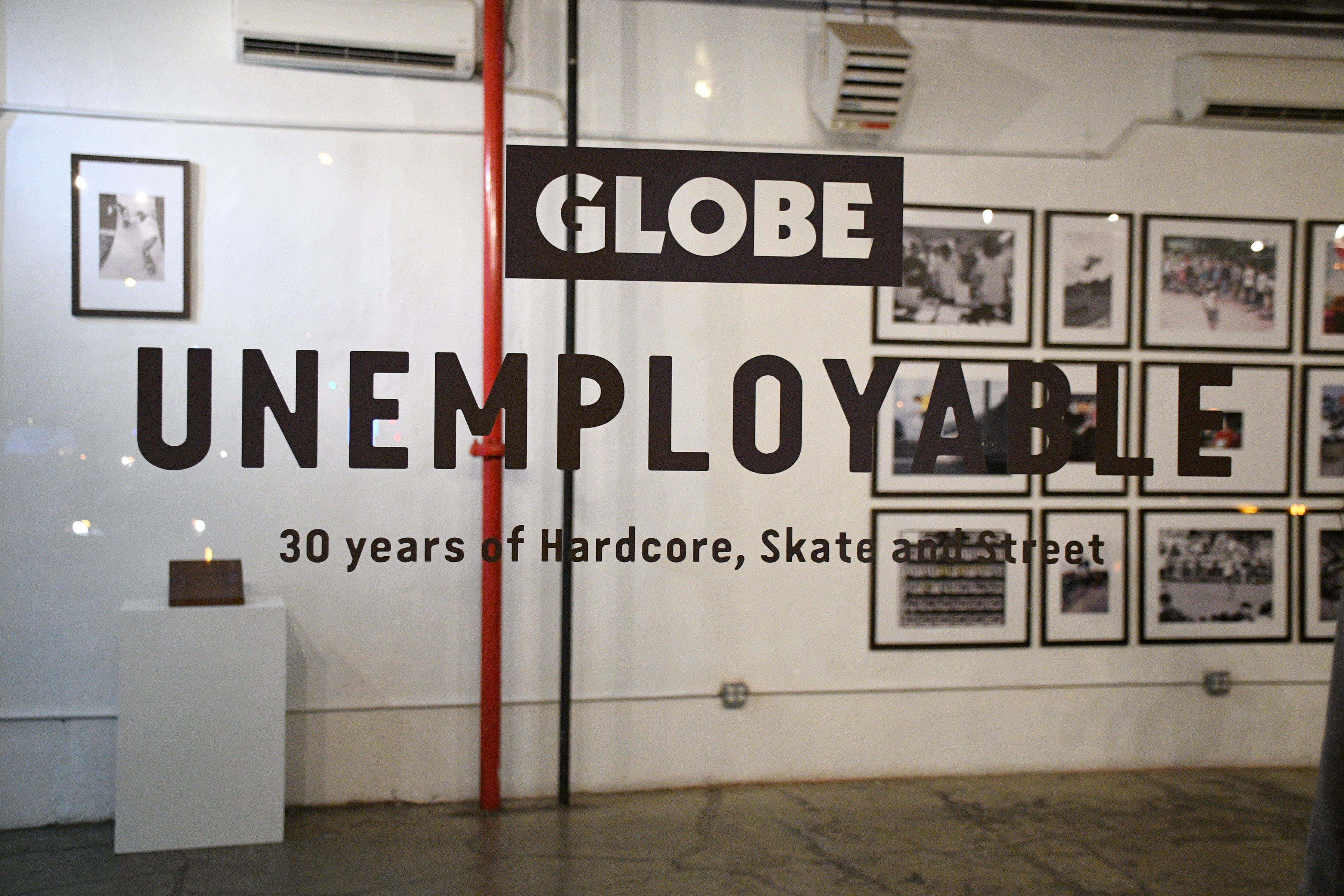 You might be thinking, “Globe, that Australian surf brand?” Or, “Globe, the big puffy shoes?” But there’s more there than just the shoe brand that most skaters know about. Long story short, A couple of Australian dudes started a company called Hardcore Distribution back in the mid ’80s – they were distributing American brands like Variflex, Vision and Airwalk in Australia. They also licensed American skate apparel and footwear. After many years of distributing other people’s brands, they decided to launch their own – Mooks clothing and Globe Shoes in 2001. They took these brands, put them under Hardcore Distribution and changed the name to Globe International. Then, in 2002, they expanded further by buying Dwindle Distribution, which included brands like World Industries, Blind, Deca, etc. Now Globe is one of the biggest skateboard houses, pushing all these brands, and they’re even publically traded on the stock market. Yup, that’s right, you can actually buy Globe stock. Weird, right? 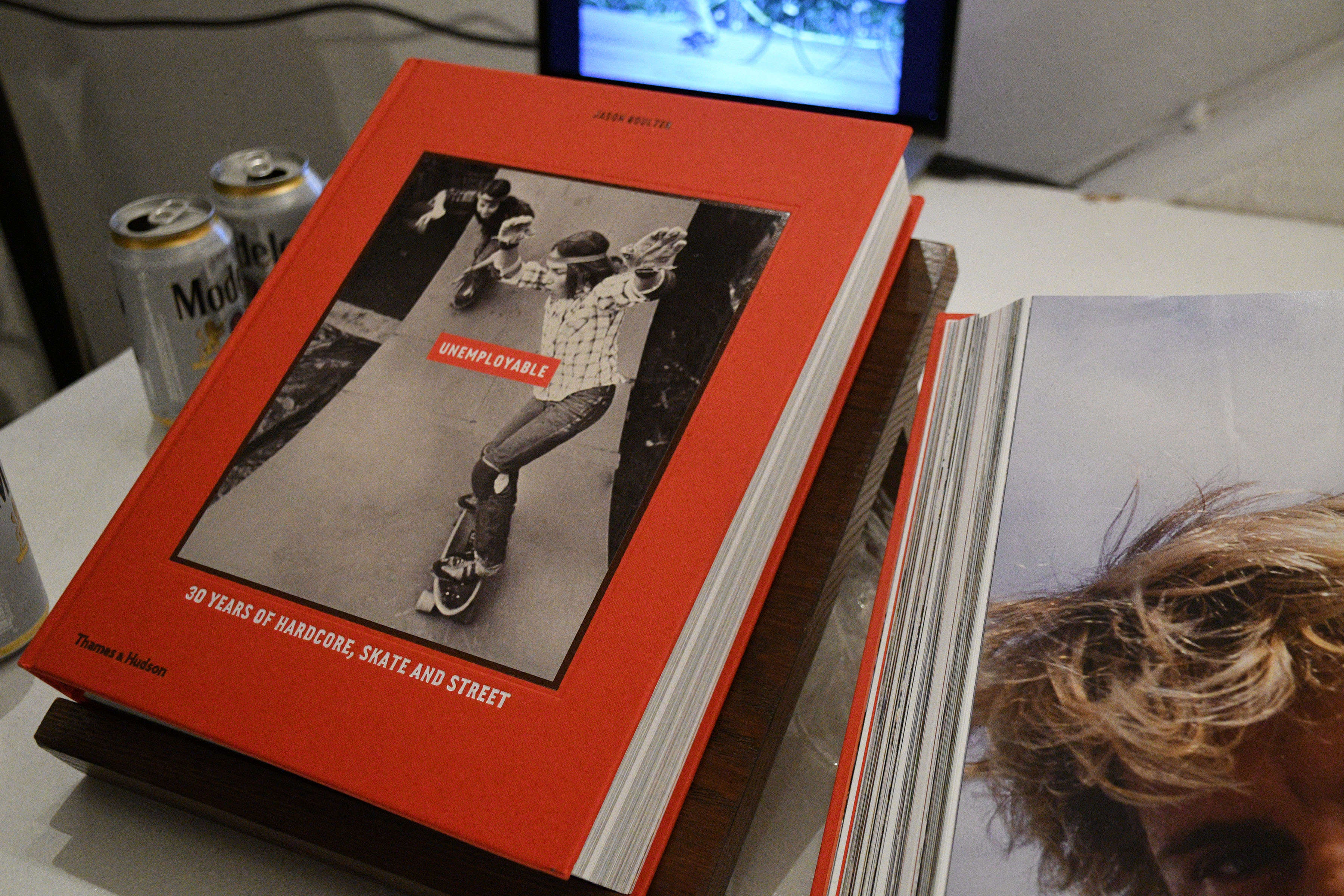 You can’t really tell from this photo, but when I say this book is fat, I really mean it, this book is FAT. Maybe the thickest book I’ve ever seen, and certainly the heaviest I’ve ever owned. I joked about Jenkem Vol. 1 being a great doorstop or paperweight, but this book truly takes the cake as a doorstop. Clocking in at 708 pages and 10 pounds, it could prop open a bank vault. You know what they say: the bigger the book, the smaller the dingdong! Just kidding. 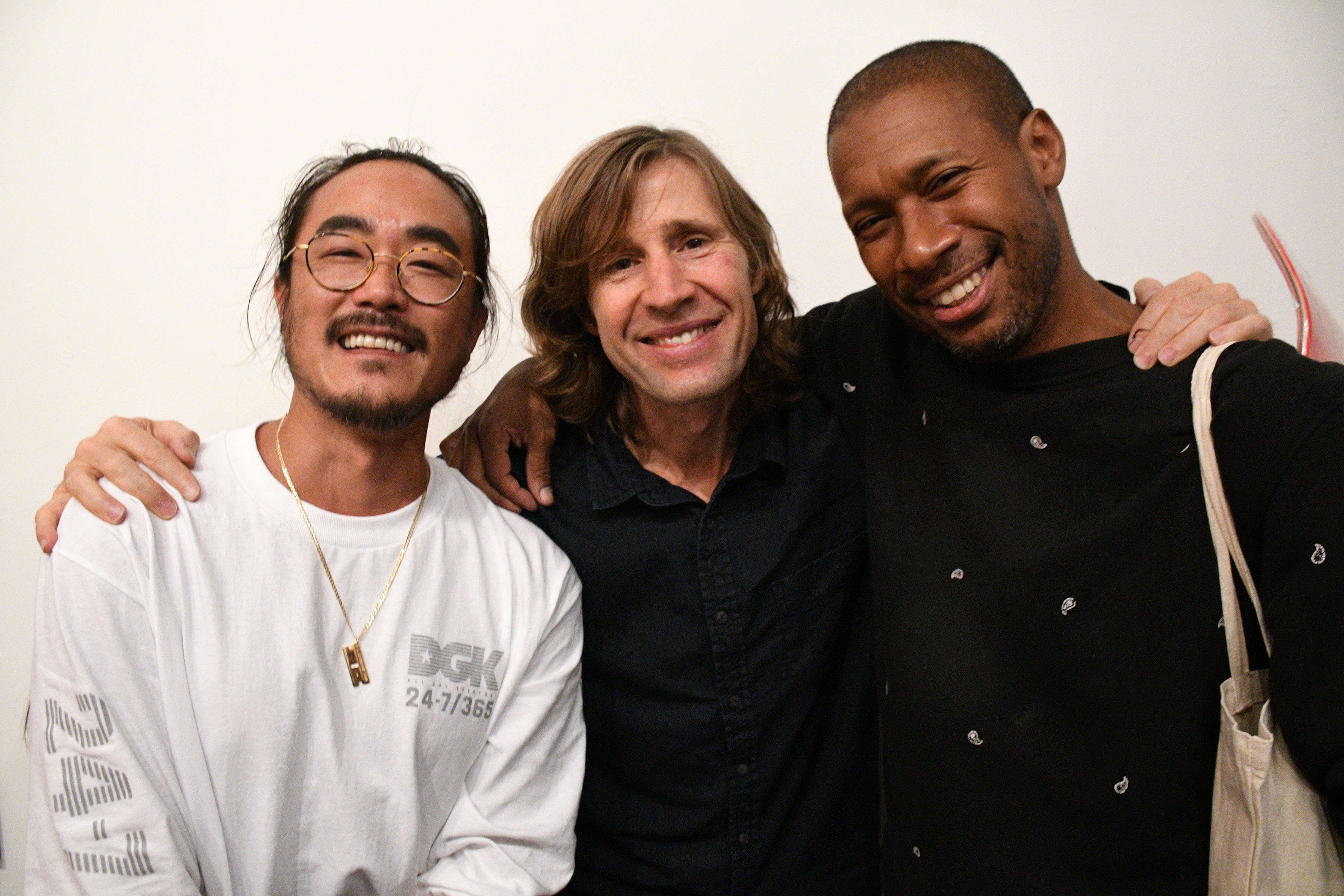 From left to right, Spencer Fujimoto, Rodney muthafukin’ Mullen (no one really calls him that), and Alex Corporan. A couple of years ago I had the very special opportunity to hang with Rodney when he was visiting NY. He happened to be staying at Mike D‘s house in Cobble Hill (no big deal), and we set up a time to meet at a Starbucks nearby. We met around 11pm because he wanted to skate afterwards, and he likes to skate at night. Anyway – we talked for about an hour about all the TED talks and tech stuff he was doing at the time, about meeting Obama, and about some sort of think tank he was involved with. Deep stuff that my skate-spammed brain could barely comprehend. Then we ate a cookie together (dark chocolate with light sugar sprinkles) and went our separate ways. Me, to bed, and him, to go start his skate session, which I assume is one long, perfectly executed freestyle routine that goes on till 4 or 5 in the morning. 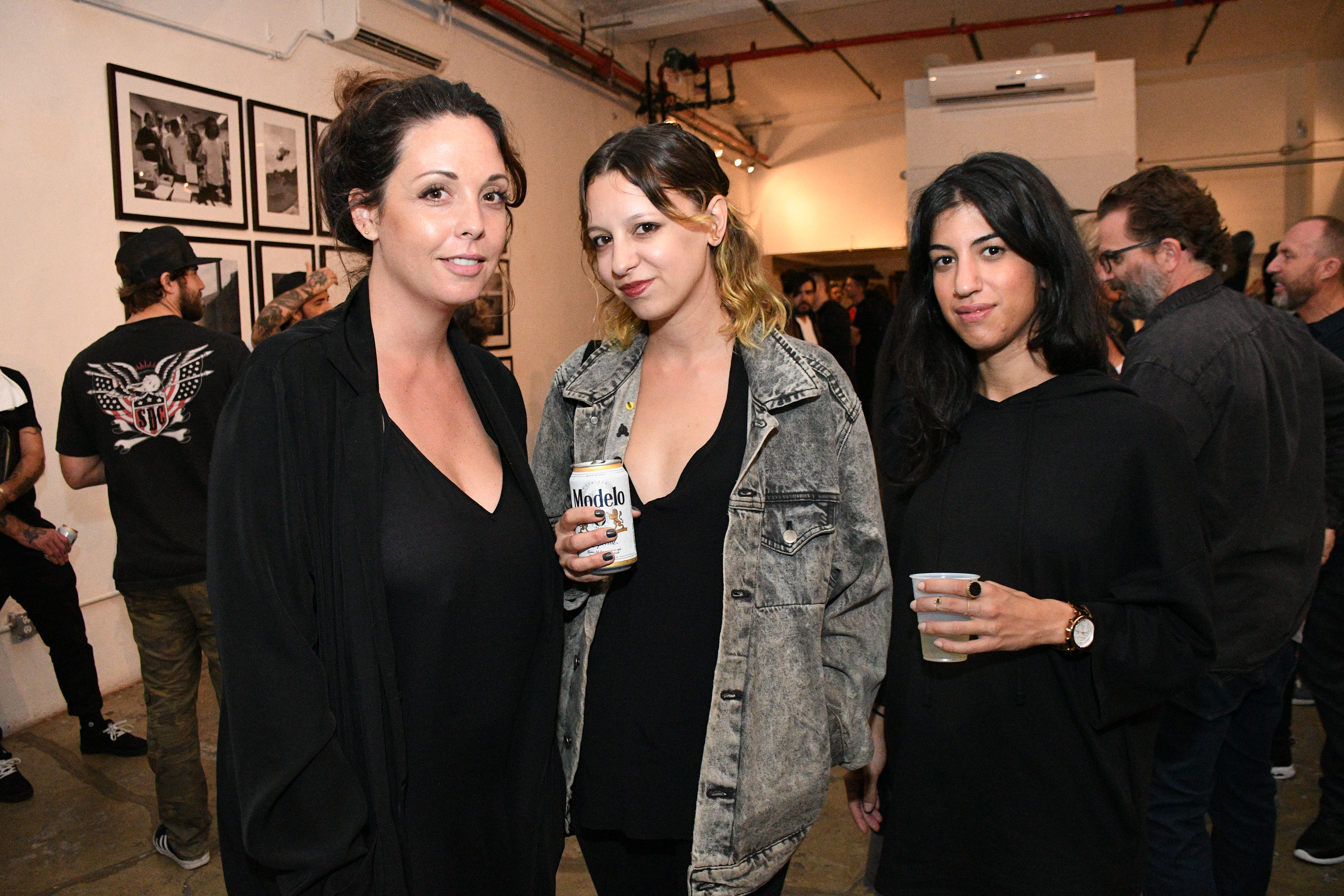 These women showed up to thankfully provide some much needed estrogen to balance out a bunch of men talking about the history of their toys. 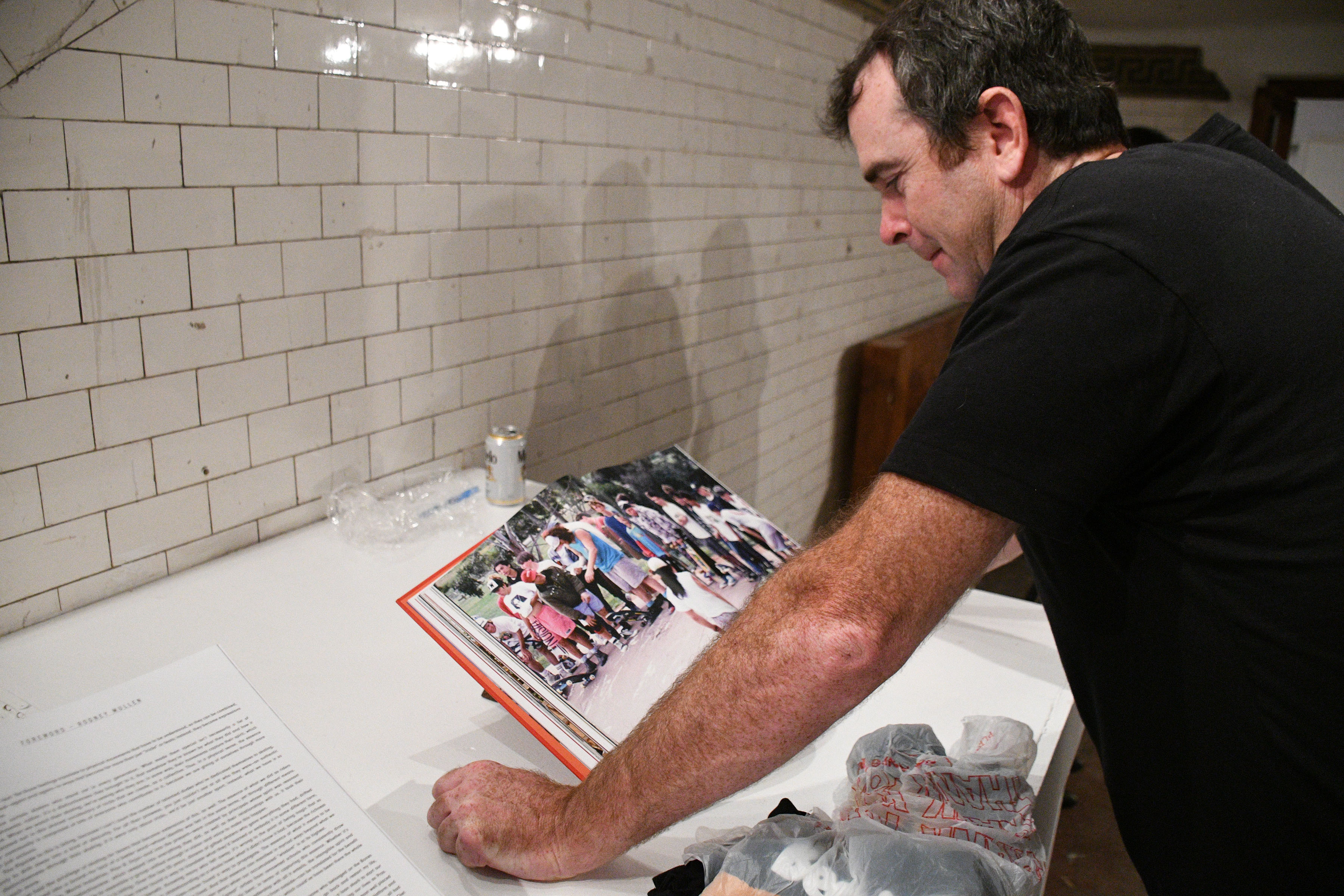 From the side, this kinda looks like World Industries’ fearless leader Steve Rocco – but it’s not. If you don’t know who Steve Rocco is, brush up on your skate history and watch this, or ignore it and just go along your merry way and watch the Dew Tour. Last I heard about Rocco, he surfs a shit ton and is into trading or investing or something. He supposedly has an action sports investment supergroup consisting of a couple of other skater and surfer big dogs who pool their money together. Get it how you live, Rocco! 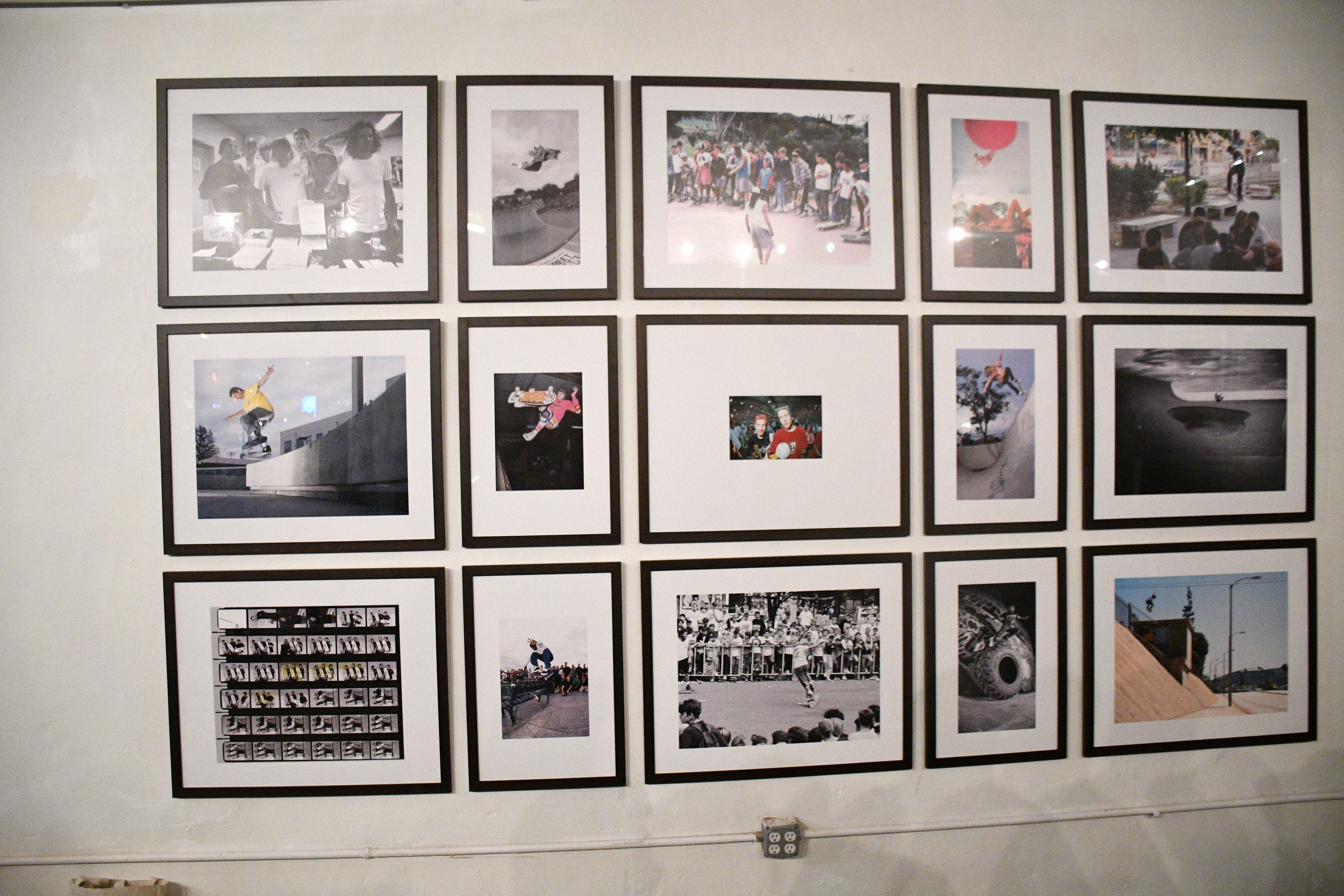 Here’s a nice lil’ gallery wall at the party showing off some of the epic photos of Globe riders past and present. My favorite one is actually in the middle, that little photo of Mark Gonzales and Jason Lee. By the way, apparently Jason Lee isn’t a Scientologist anymore (#prayerhandsemoji). 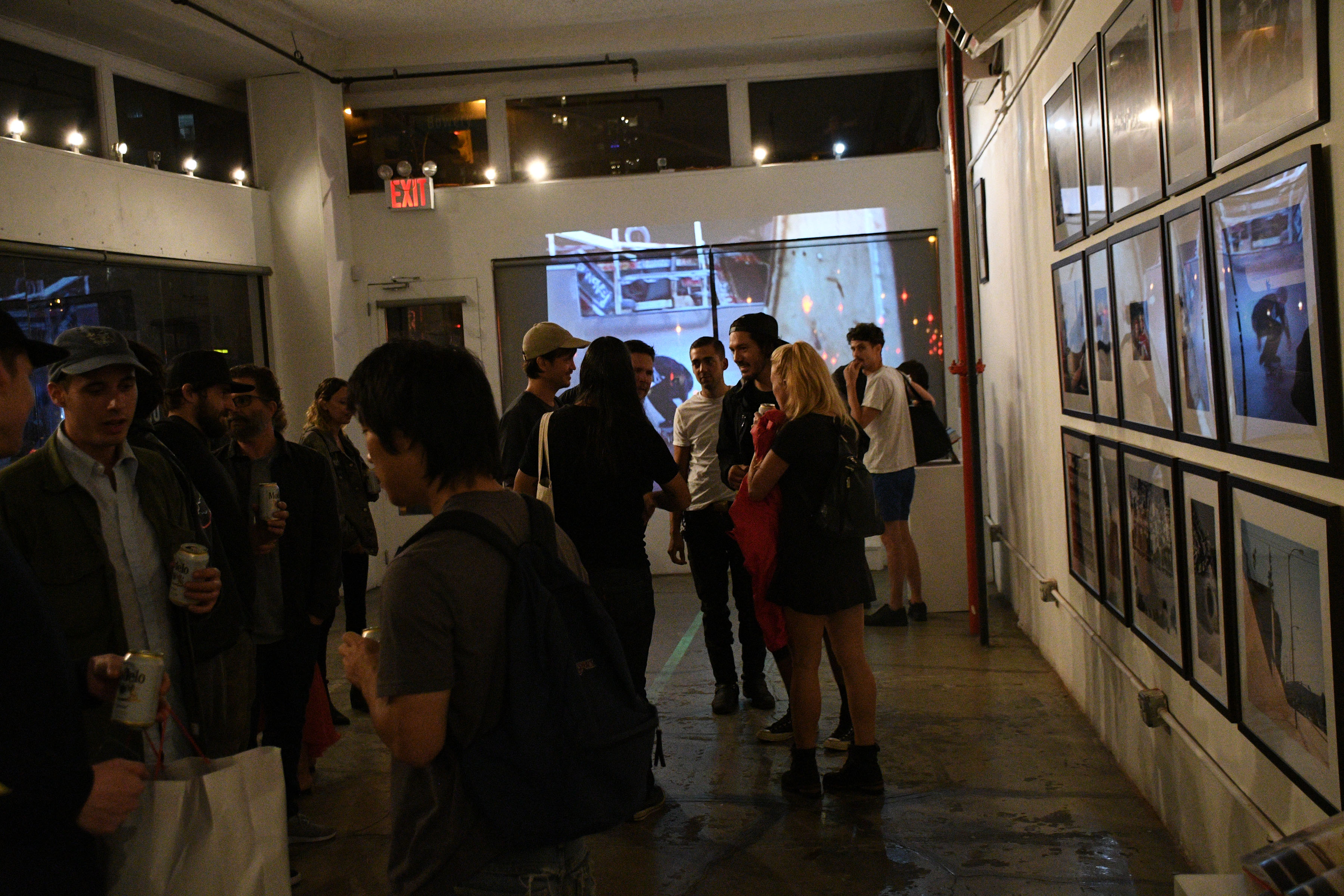 A couple of my friends that don’t work in skateboarding used to be hyped about getting invited to skate parties and photo events and whatnot, but after going to a couple, they kinda got over it. I understand why, skate events are kinda strange – it’s always the same hundred or so people, and everyone knows each other. It’s like a continuous high school reunion, everyone standing in their little circles of insecurity, wearing cool clothing and drinking beer and looking over their shoulder every once in a while to see who just walked in. If you don’t work in skating or aren’t in the fraternity, people will most definitely cool guy, be forewarned. 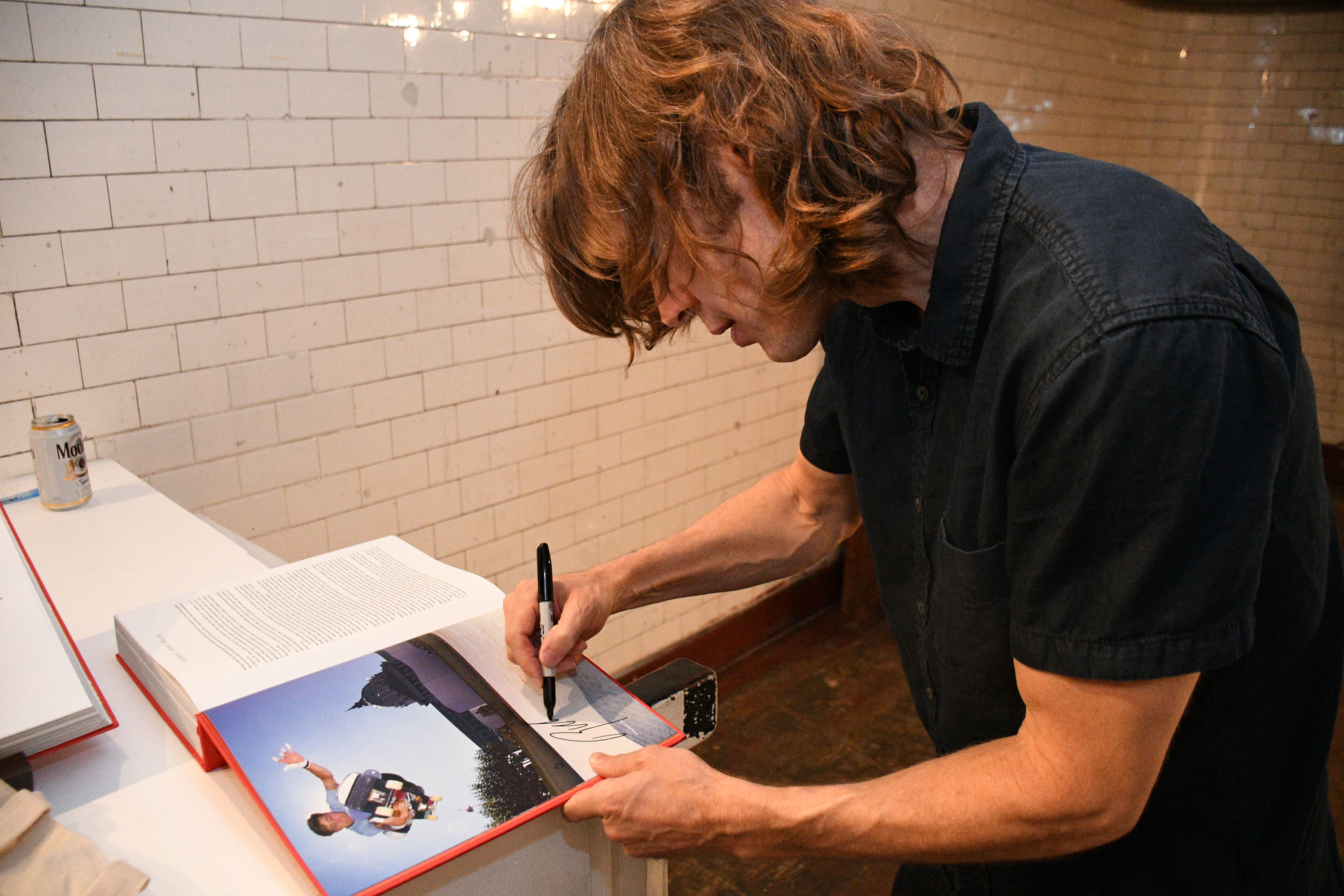 Here’s Mr. Mullen signing a book for a fan. Kind of reminds me of a funny book signing story I heard from a friend who went to the Marc McKee book launch in LA for The Art of Marc Mckee. For those who don’t know, Marc McKee also works for Dwindle and is basically one of the best artists in skateboarding. Anyway, when my buddy showed up and was waiting in the super crowded line he saw McKee queued up waiting to get into his own book release party. Eventually, someone came out and pulled him inside, but I think it’s so sick that Marc was patiently waiting in line, not sure if he’d make it into his own show. What an amazing, humble and lovable dude. 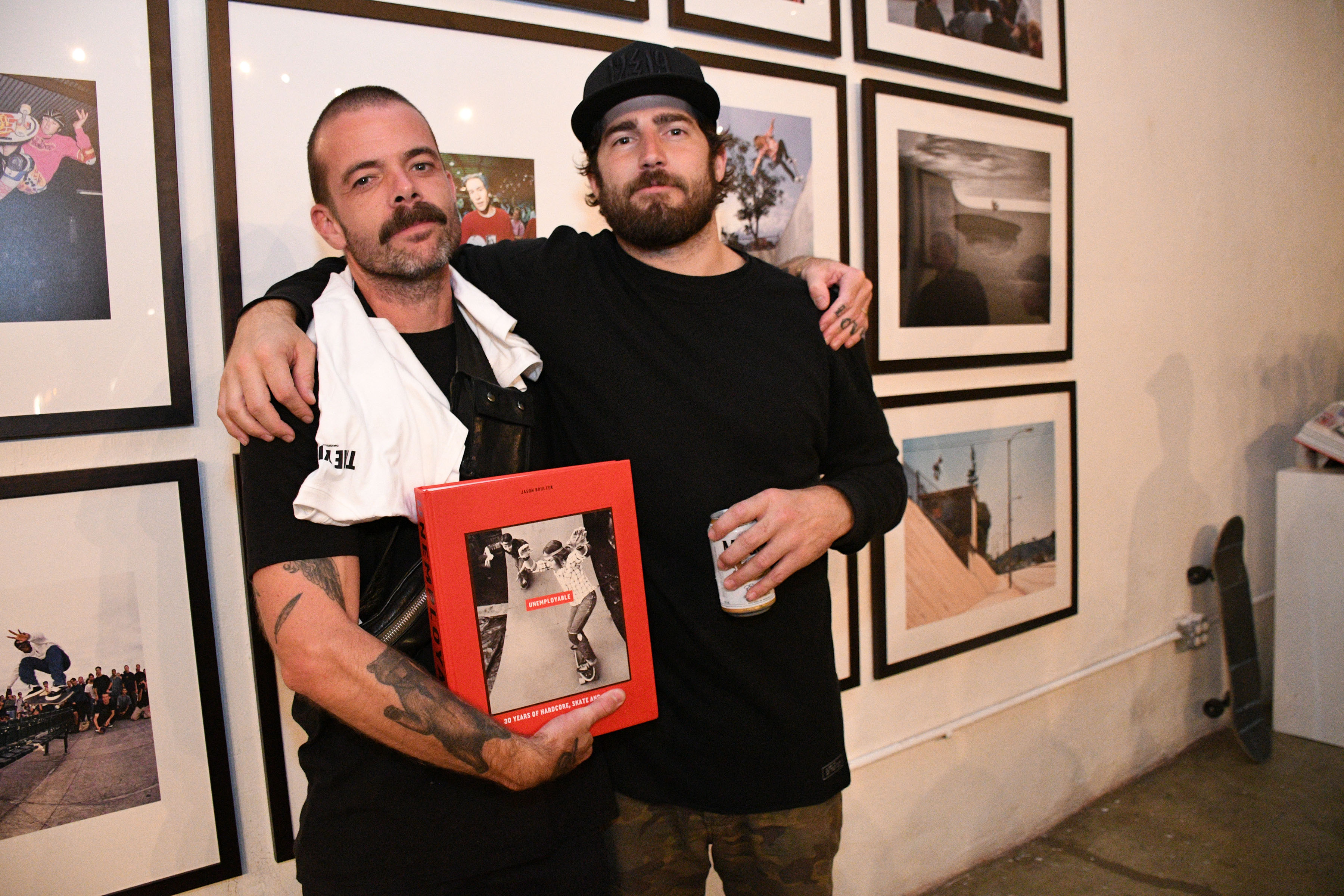 We should probably mention these two guys… the dudes that actually made the book. Herb George (Creative director of the book) and Mike Beach (Art Director of the Book). They did a good fucking job and you know these guys probably lost their minds multiple times throughout the process. Formatting, Copy editing, sourcing photos and documenting the history of a company over 700+ pages is a sure way pick up a drinking problem. Cheers, y’all deserve it!