UNSEEN PHOTOS OF SKATING NYC IN THE ’80S 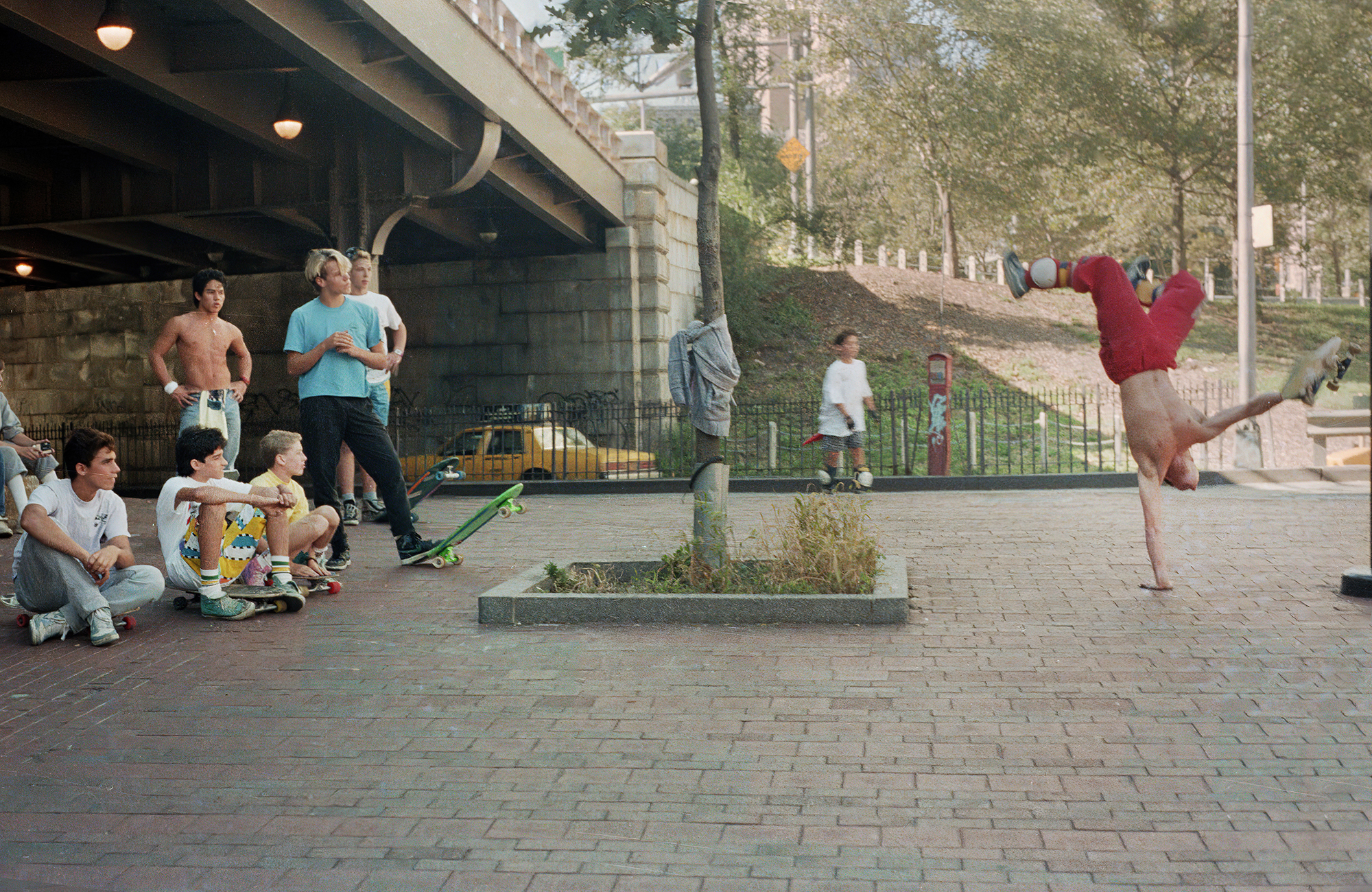 Even though I might not have met you, I know something about you with 99% certainty. You have a camera with you right now. Fuck, you might even be reading this on your camera. Today, skateboarding and filming go hand in hand, especially when you get good. You go out skateboarding specifically to film it. But it wasn’t always like that.

In New York City in the 1980s, NO ONE casually filmed. No one shot pictures. Or video. Or if we did, it was rarely. And poorly. Casually taking out a camera to document an event was actually seen as rude and intrusive back then. The camera made people act differently. Because they knew they were being watched and they knew there was going to be a record of it. It killed the vibe. Period.

Stana Weisburd was one of the few local downtown NYC skater chicks back then. She hung out all the time and was known and loved by all the OG downtown skaters for her big personality and hilariously vicious sense of humor. So, she managed the impossible. She casually shot pictures of all of us skating and hanging out back then on her film camera.

I asked her about her pictures a few months back and she said she had lost many of them over the years. But she found the negatives. I had to see! So I paid for the old film negatives to be scanned and digitized for the 21st century. Here are a few of the more epic finds from the vaults of our much beloved, big mouthed, 1980s skate betty: Stana.

Disclaimer: This article is based on my own personal memories from 1986 and in no way is meant to be the definitive truth. I have reviewed all these photos with Stana Weisburd, the photographer, as well as numerous other skaters from this era. If your name wasn’t mentioned, or if you remember it differently, or if you have some other issue. Sorry. Hope that helps you move on with your life. 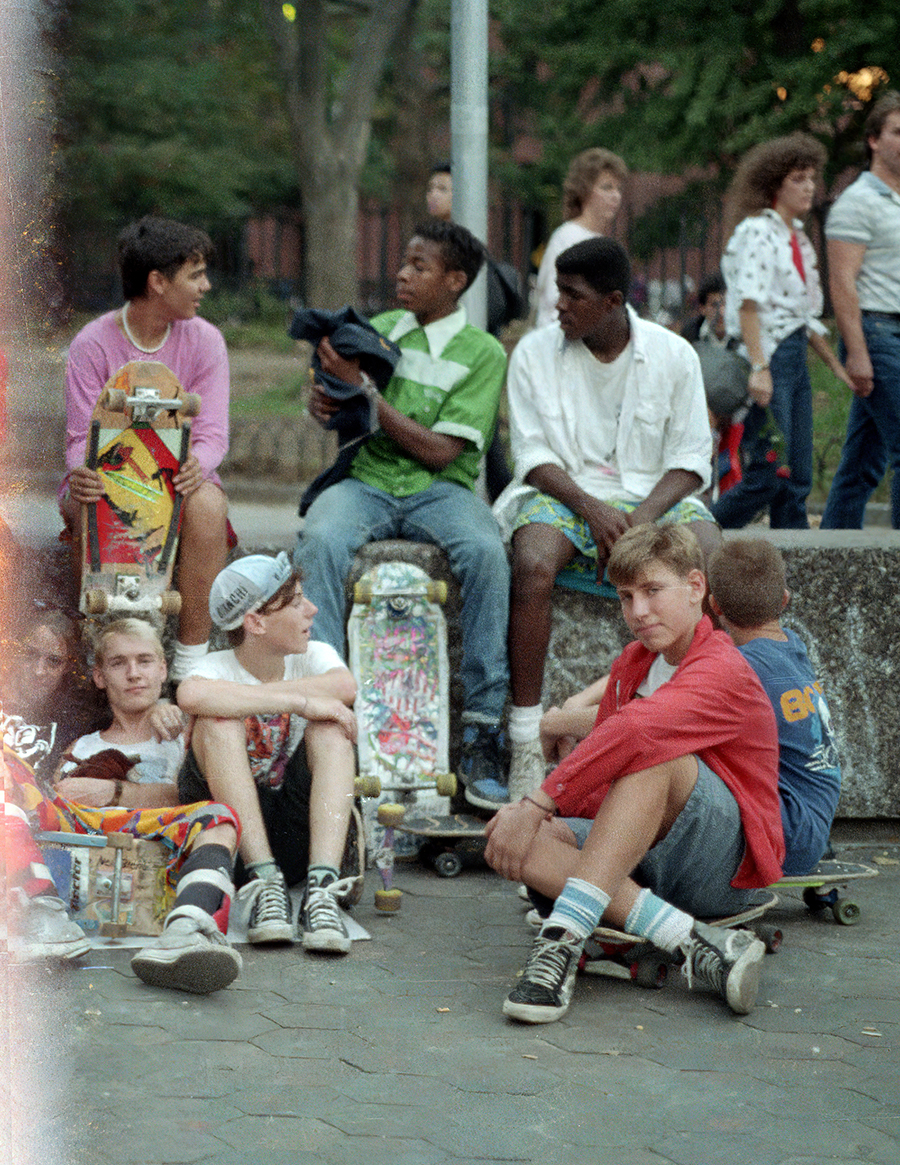 Before beepers and cellphones, this is how we met up and socialized. We’d hang at the concrete benches east of the fountain in Washington Square Park. You would just leave your house and skate right here and magically all your friends would be hanging out. In 1986 all the hardcore skaters were friends in NYC. There were about 40 of us in total and we were a crew. Now, everyone skateboards but back then you were either with us or against us. 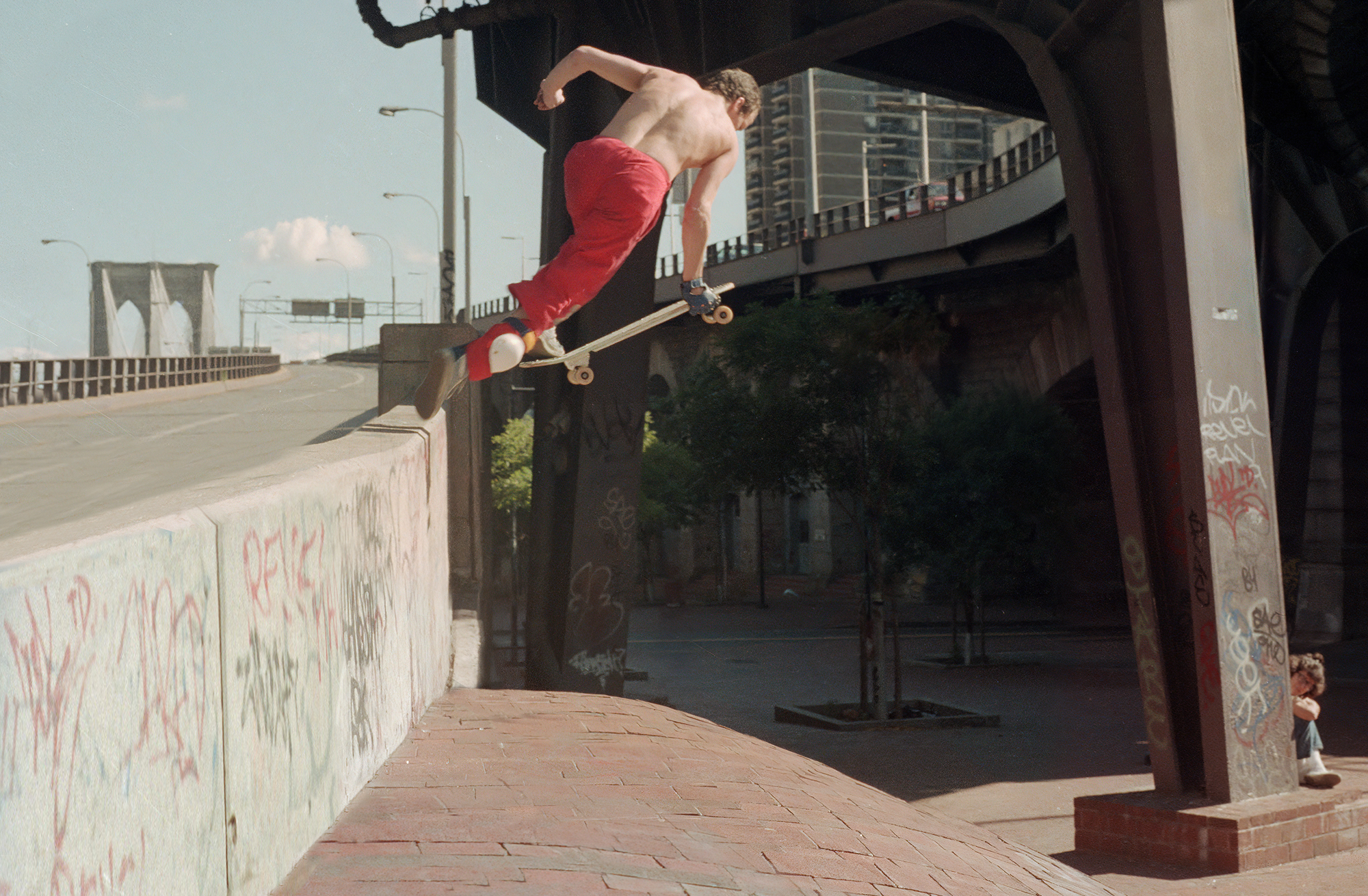 In 1986 Ian Frahm had the rep as the best skater in NYC. He was gnarly. He wrote graffiti – THOR IBM – And he was in Future Primitive with the Bones Brigade. And there was no one who skated the [Brooklyn] Banks better than Ian. This was his domain, and when Christian Hosoi visited us one summer, Ian represented for NYC. 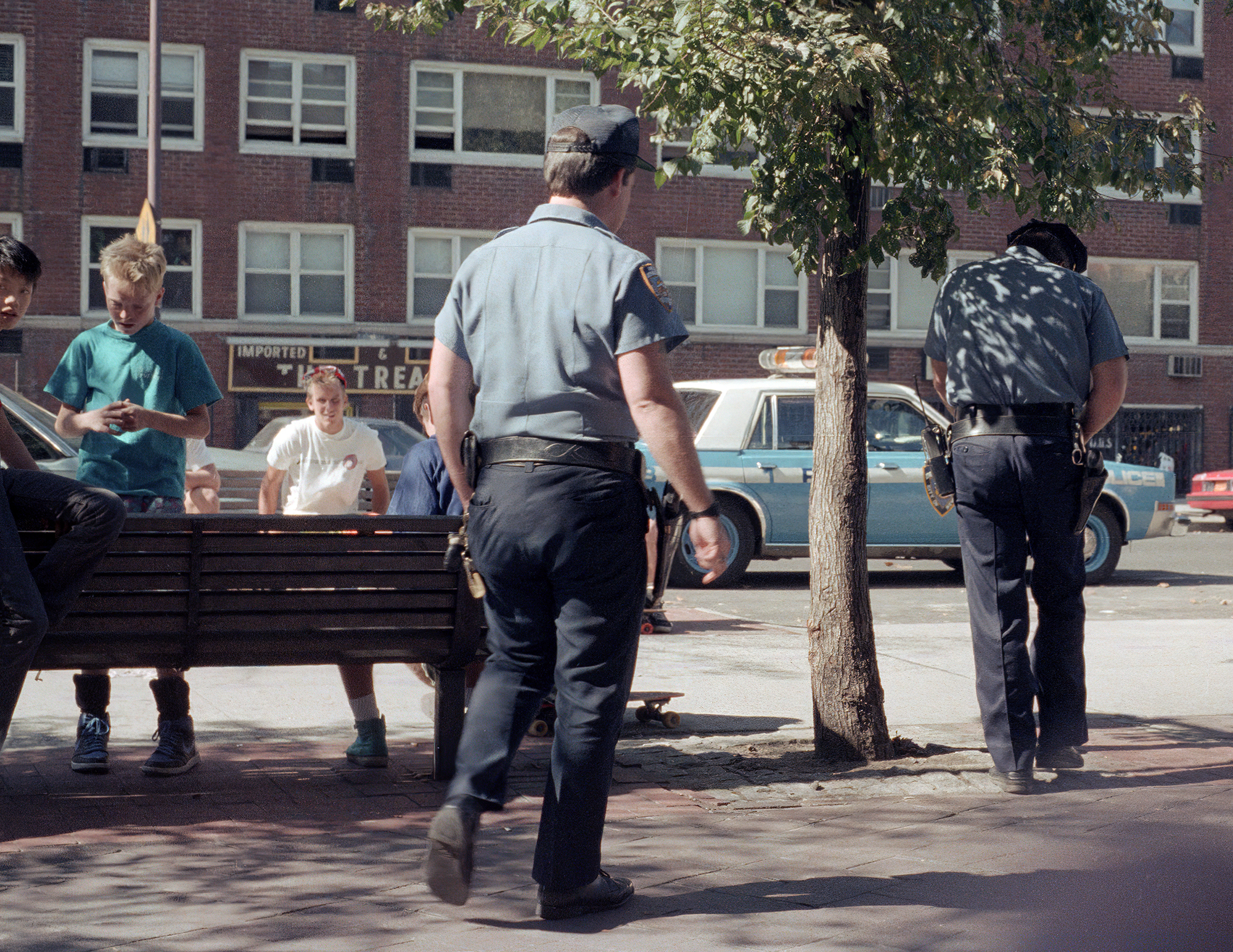 Back in the 1980s skateboarding was truly illegal. Like we would actually get arrested for skating. I was issued summonses and had to go to court a few times. I had my boards confiscated. And one time (right here at this same exact spot) the cops arrested eight of us and stacked us all on top of one another in the back seat of the cop car like a skater sandwich. We used to call cop cars “Blueberry Bacon Mobiles”. 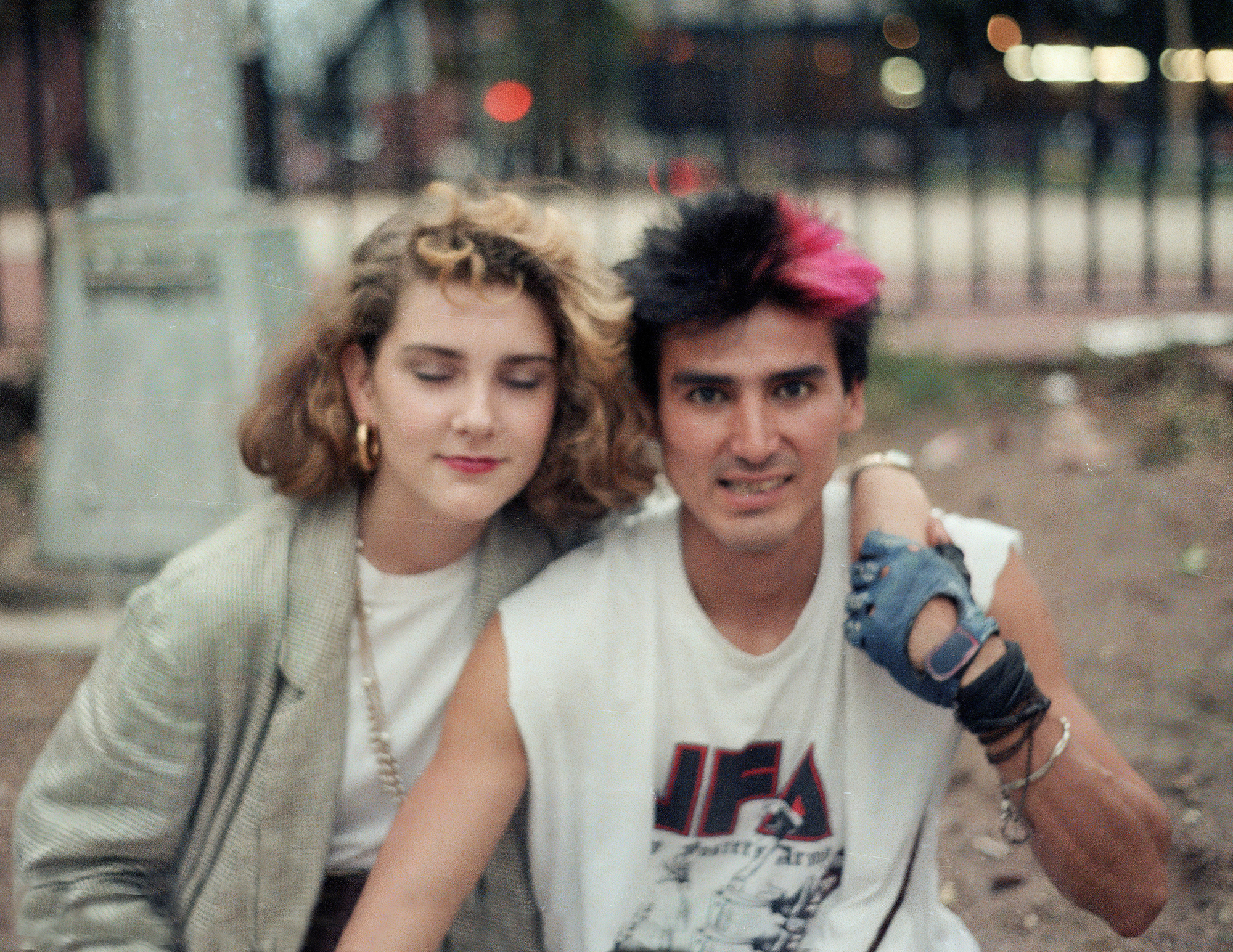 Skateboarding in NYC was super fucking foreign, so if you wanted to skate you were going to be a freak. Why not dress like it? Skaters rocked the punk look but it started morphing with Hip-Hop and high fashion. We looked like New-Wave-Clown-Pirates. Very old school Madonna. Pepe Torres here was a 1970s vert ramp master and he skated street fast and crazy. His lady friend was a local downtown girl named Deva. She dressed very cool and stylish. This picture is a good example of how men and women mashed up looks and styles back then. High fashion cool kids and neon grimy street skaters. 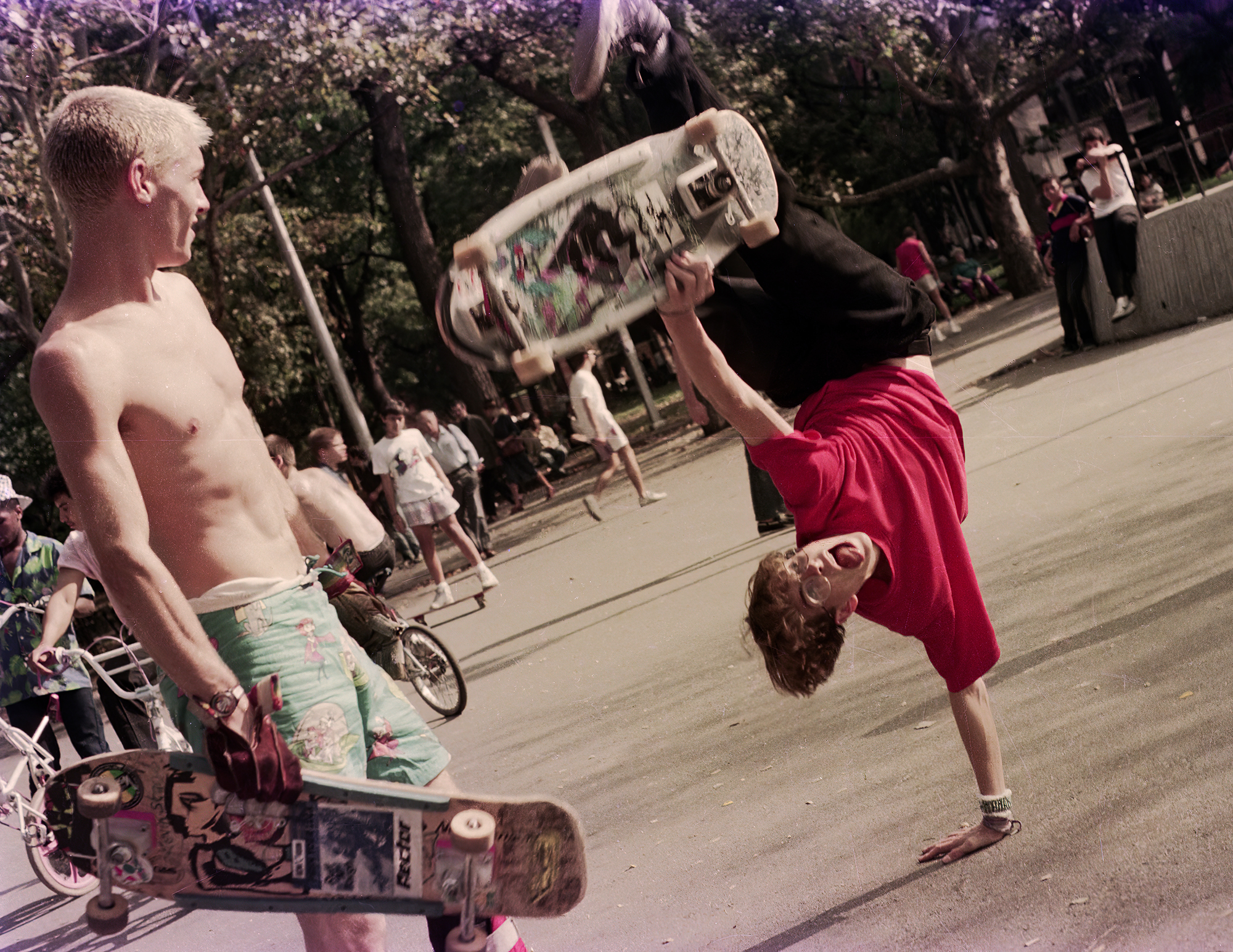 This is me spazzing out doing some kind of street plant variation as Christian Lepanto [co-owner of Soho Skates] watches. We all wasted days of our lives trying to figure out how to invent new ‘street skating’ tricks. Christian is skating an old Neil Blender and me on my trusty Natas board. After all the riser pads and rails were screwed on, these boards weighed a ton. And look at the size of the noses on our boards. 2 to 3 inches max. It’s a miracle we figured out how to ollie at all. 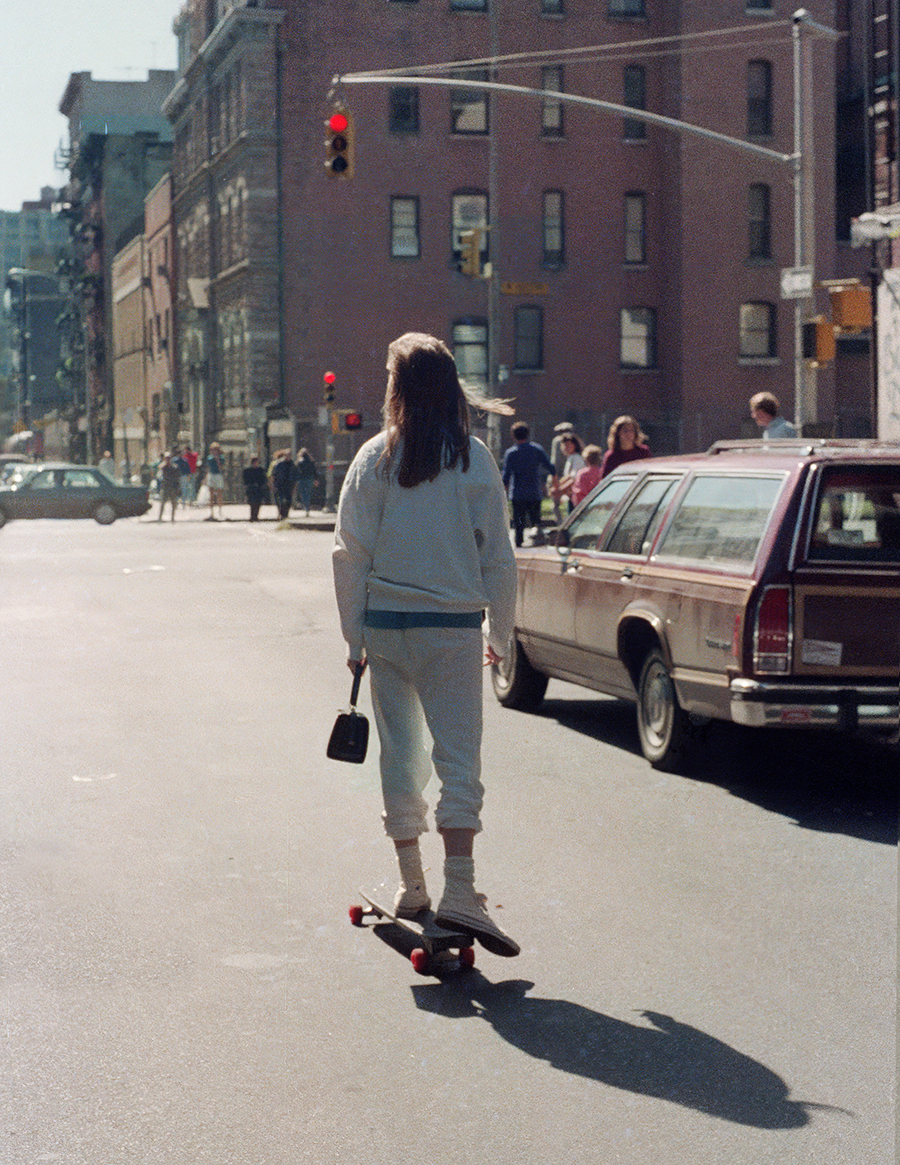 Girl skateboarders were few and far between in the ’80s in NYC. Stana took this picture of this mysterious woman skating but doesn’t remember who she was. I reached out to photographers Angela Boatwright and Jessica Bard for help, but neither of them know who she is. The one thing I do remember about her is her board. Look at it. It was like a 2×4 with a wedge screwed onto the top. I remember asking her about it. I never saw a board like this before. And I’ve never seen one again. 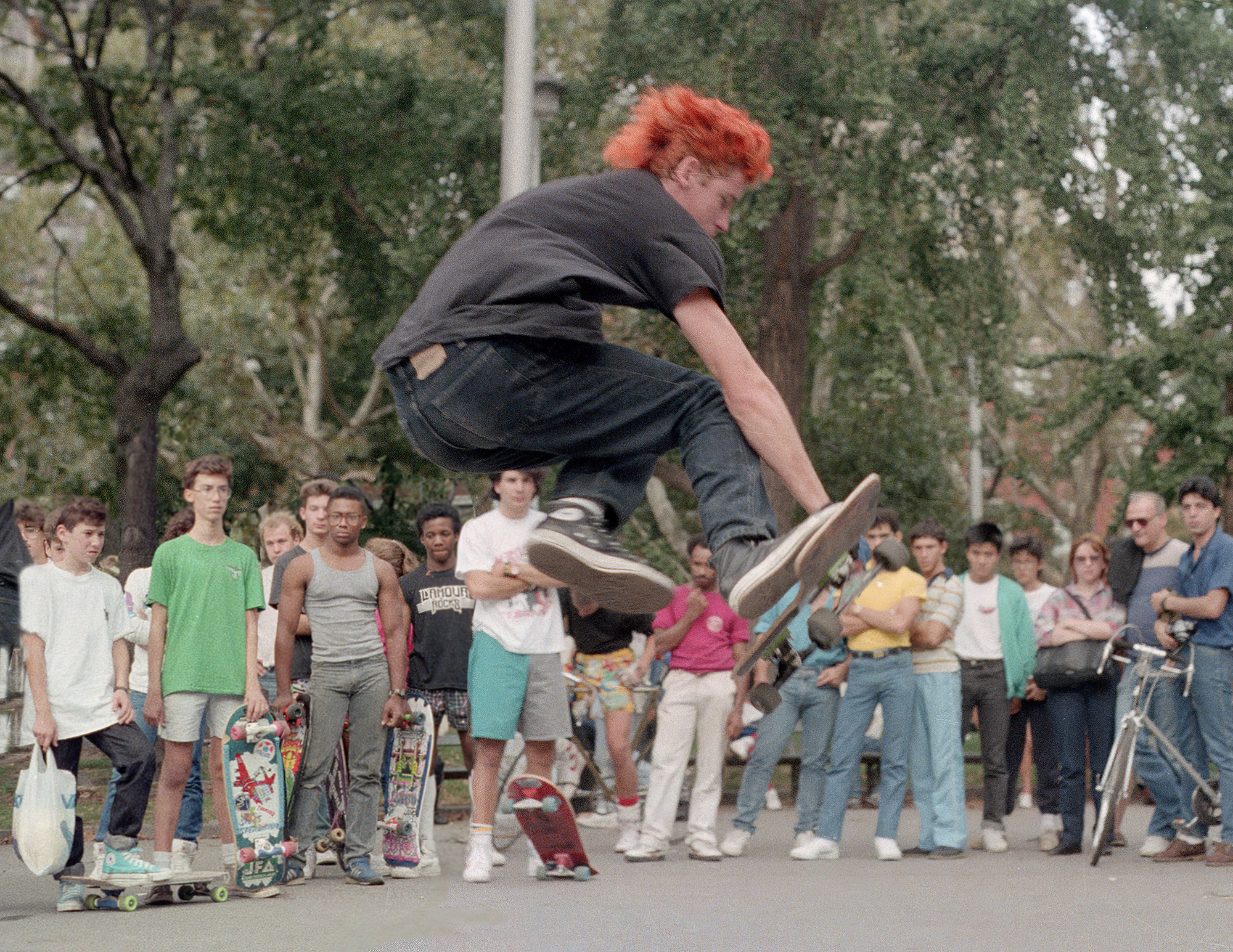 A lot of people talk about the 1980s skate boom but in NYC it really was more of a “poser” boom. There were always lots of kids on the periphery who just held their boards and watched. Posing! That’s where the term ‘poser’ comes from. It was very strange. Did they ever even try to skate? Maybe they were just intimidated by the city? I hope they all learned to have fun on those skateboards. 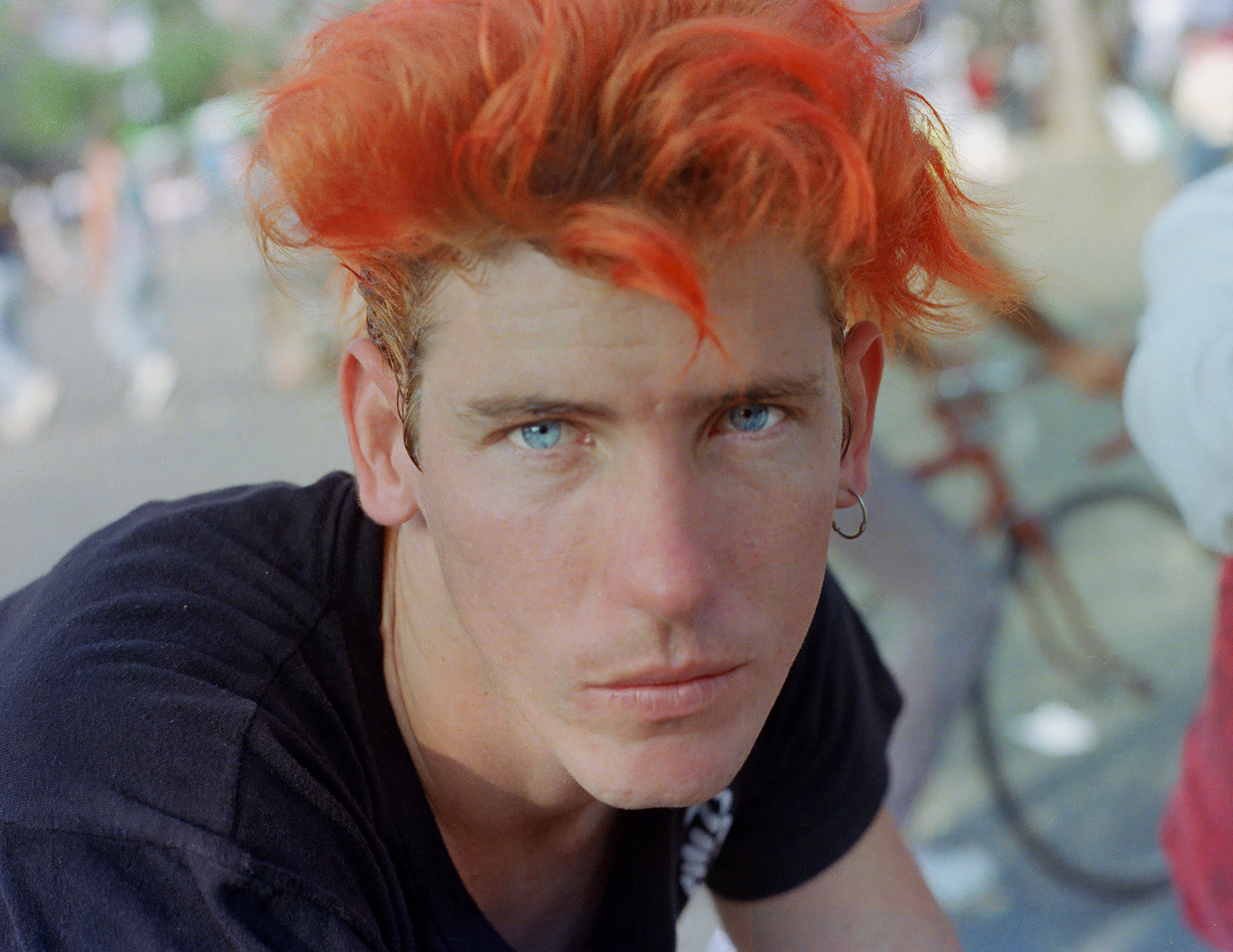 John Grigley was the first real deal professional skateboarder I ever knew. And I didn’t even know it. I thought no professional skater in their right mind would ever come to NYC. We don’t have any ramps. But that’s just what Grigley did. He moved here. We never saw pro skaters and now there’s one just hanging out with us? It did not compute. Grigley still lives her in NYC today. A true pioneer. 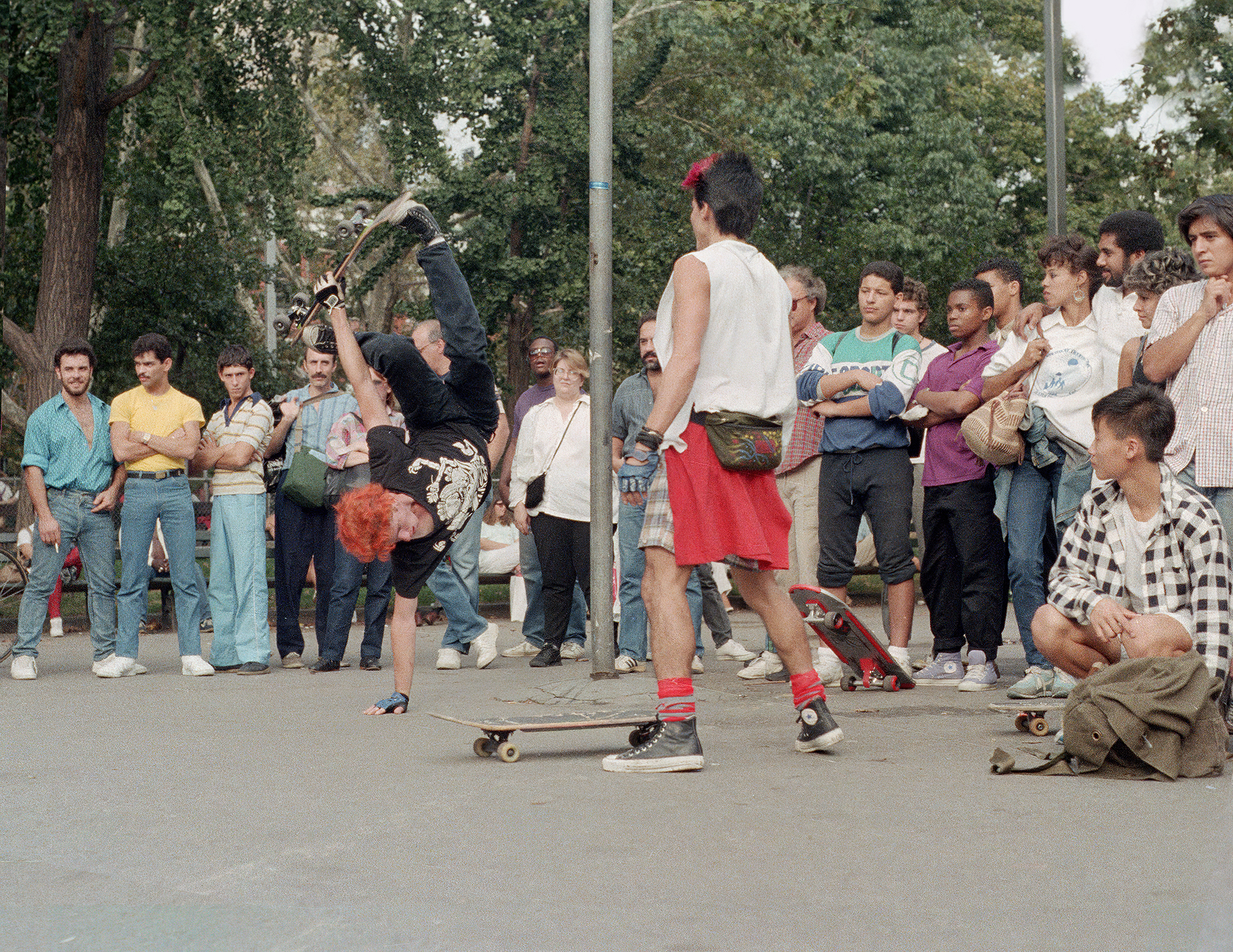 Grigley would do these pole walks to inverts. Very advanced stuff in 1986. Being that our main skate hang was in the middle of Washington Square Park we would always draw a crowd. Like we were street performers or something. Regular people in the 1980s would rarely ever see anyone in real life skateboarding so it was fascinating to them. We sincerely weren’t even skating for them. Just for ourselves. The crowds were just part of the mayhem. 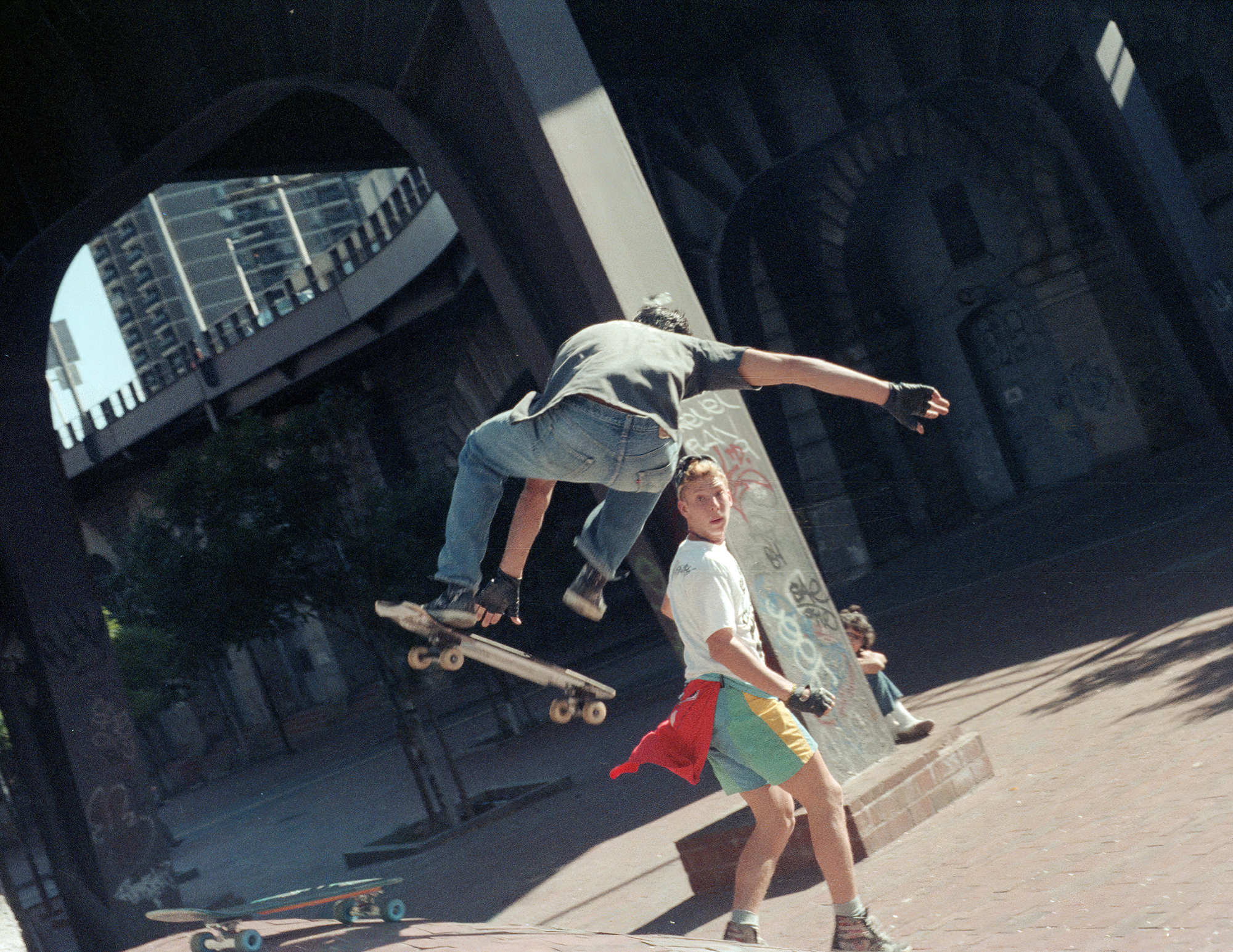 This is Dave Hackett who showed up with Christian Hosoi and was pro for Skull Skates. I’m not sure if he ever lived in NYC but he seemed to appear in NYC with all the right California superstars. I think he was a stunt man too. Apparently he jumped three cars on a rocket powered skateboard. I’m not kidding. Not sure who the kid he is about to crash into is, anyone know? 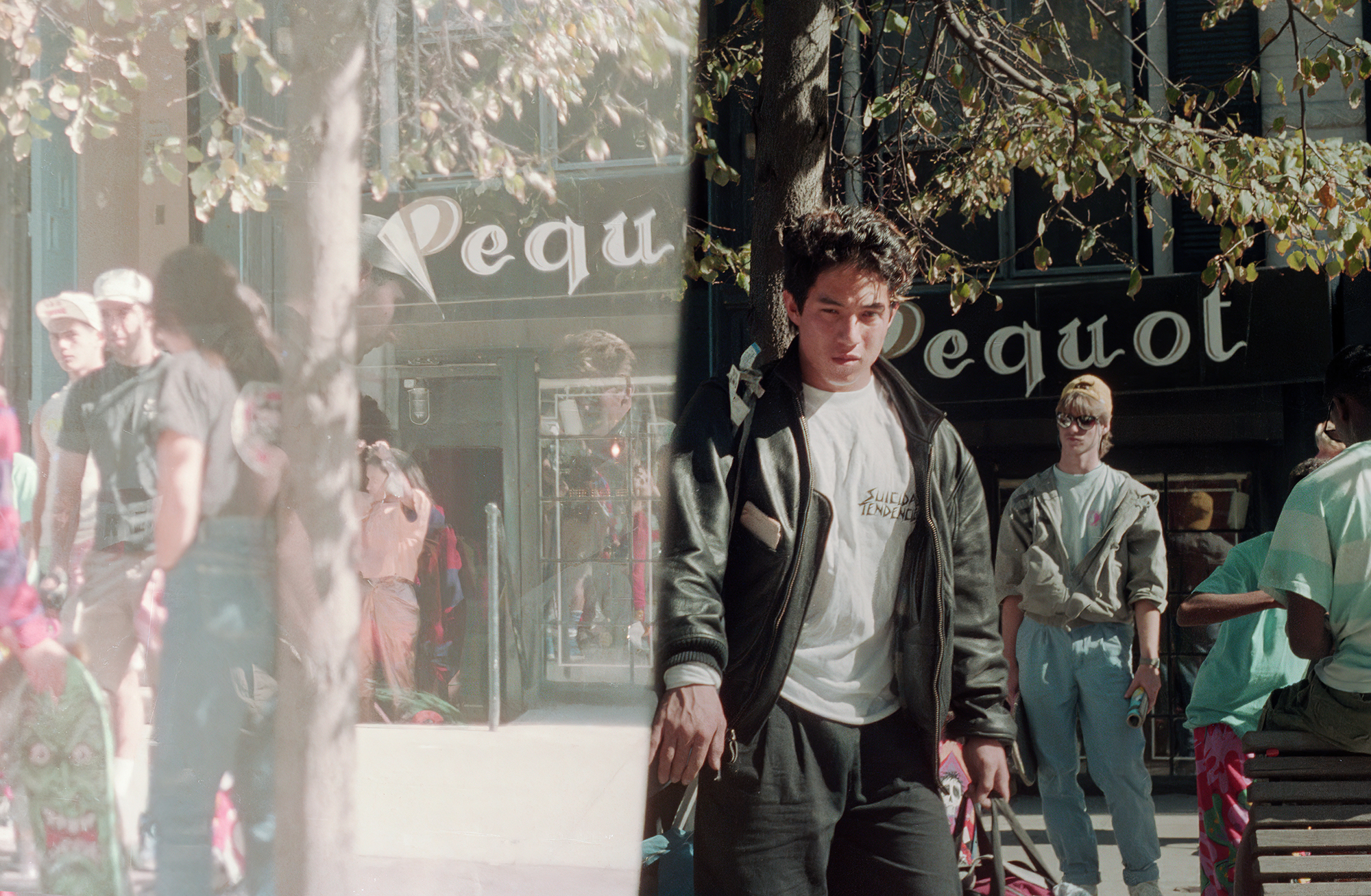 This is an 18 year old Christian Hosoi and, with all his bags, it looks like he has just landed in NYC. Hosoi coming to NYC was like as if Elvis came to visit. He was a superstar on a hyper 1980s MTV level. No modern pro skater can compare to the celebrity Hosoi had back then. 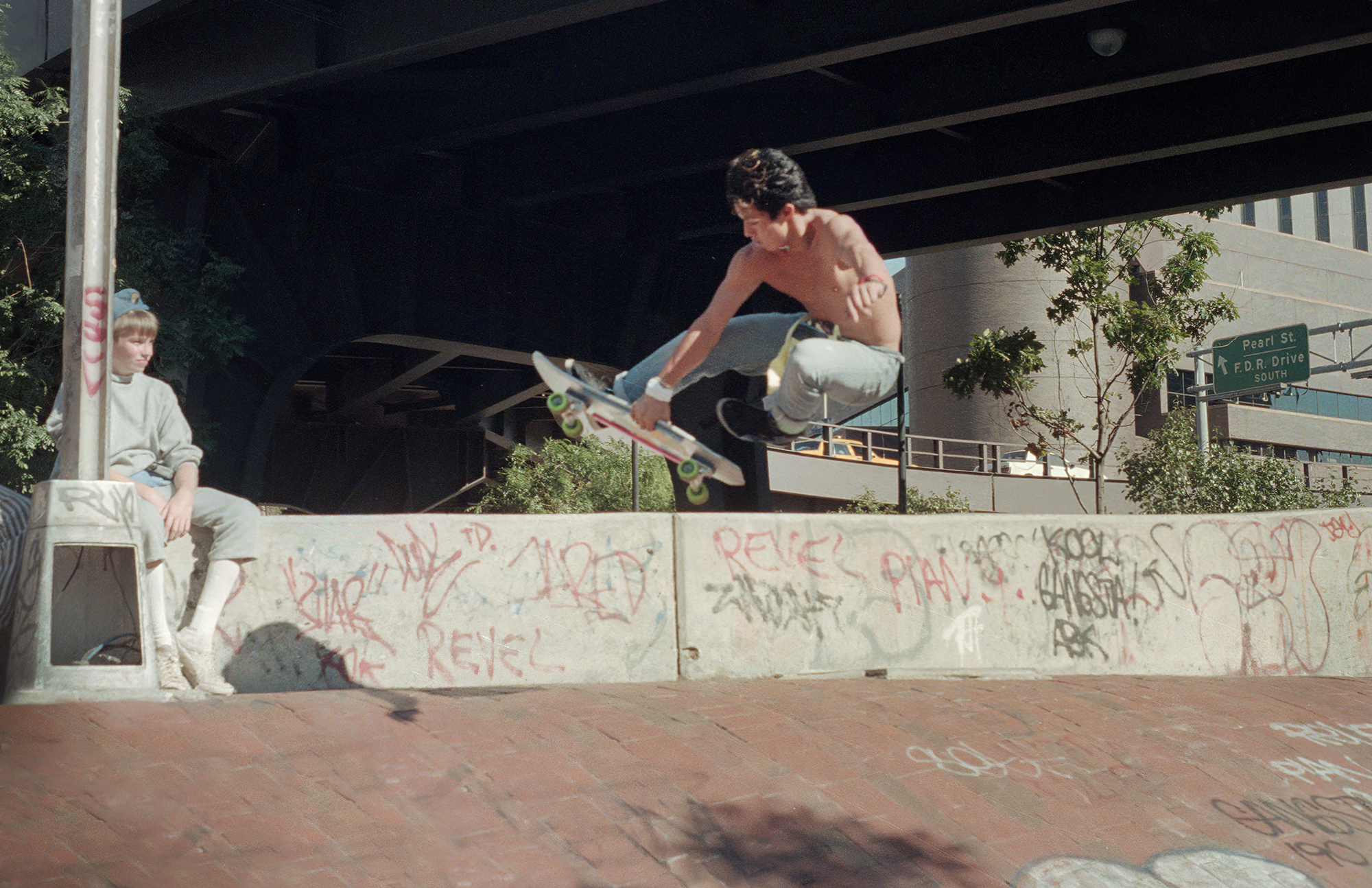 This was Hosoi’s first session at the Brooklyn Banks and I was there. We were all still trying to figure out ollies so most of what we would do back then was boneless based. Boneless to tail on the wall. This was so long ago that if you look closely you can see that the edges of all the bricks still had sharp edges. If you did a powerslide the bricks would rip your board out from under you. Shout out to – SEV – Graffiti king of the Banks. 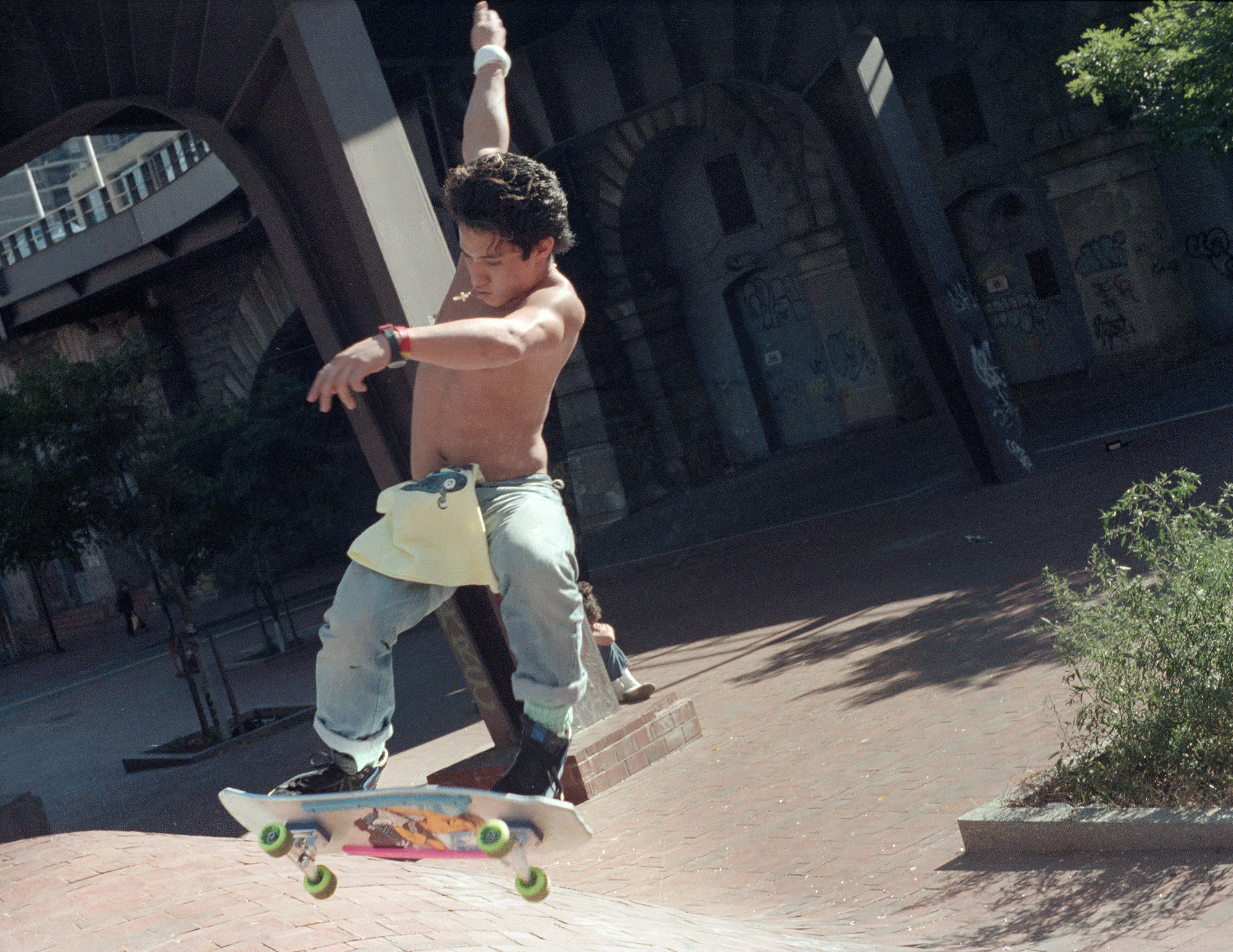 Although this particular photo is probably a bail, Hosoi fucking ollied the banks wall this day. It was the first time anyone even tried it. He looked close at the banks, got on his knees and found the last brick pointing upwards and put a Hosoi sticker on it to locate it. To be clear, this was over the TALL WALL at the banks. Not the little wall everyone after him ollied over. This was a giant five foot high ollie in 1986. After an hour of trying he fucking levitated over the wall and into the highway. BOOM. We all lost our little minds. 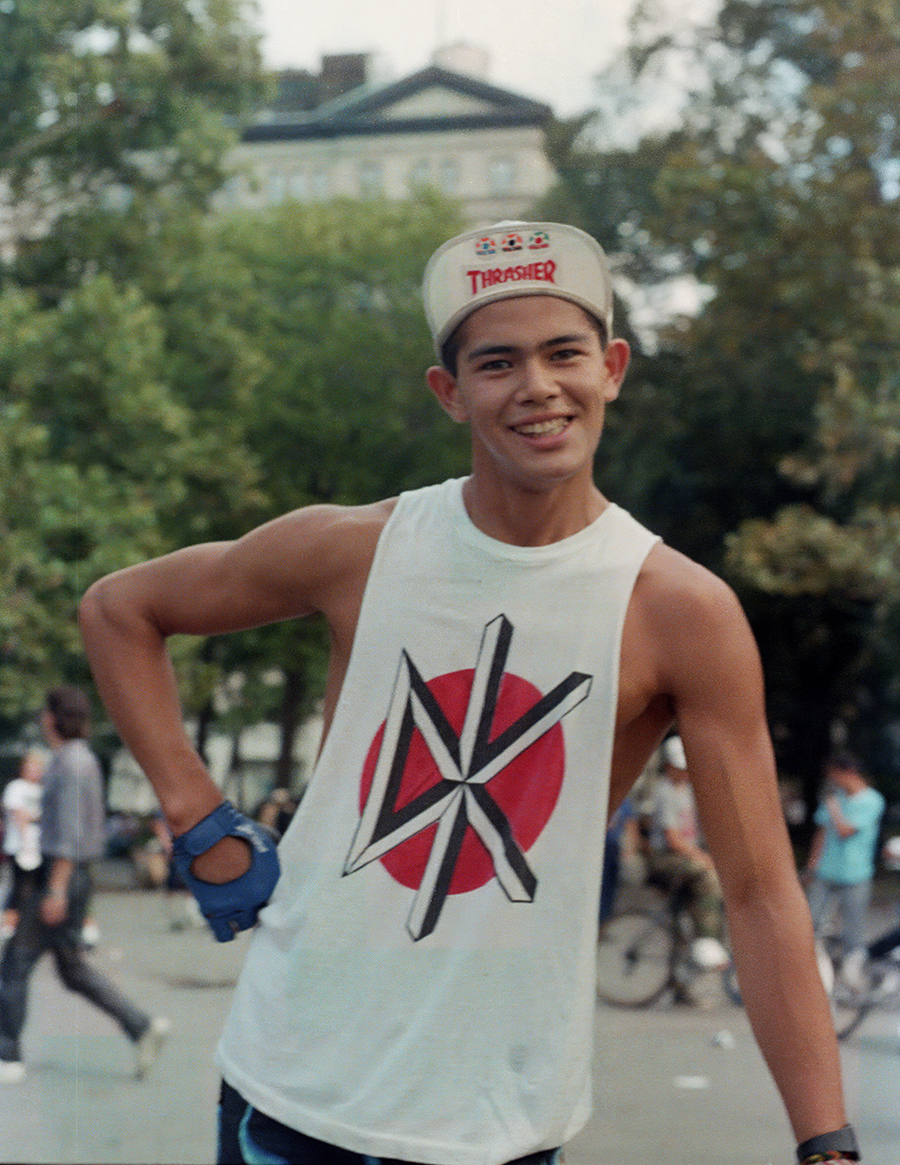 If you’ve been skating in NYC for any long length of time you for sure know this one-of-a-kind maniac legend. Originally from Brazil, back in 1986 Harry Jumonji was a baby faced local with a 10,000 watt personality and the skills to back it up. As I mentioned before, ollies were just starting to happen in skating and Harry was obsessed. He would always yell out, “Ollie to New Jersey!” constantly. It became our battle cry as we all desperately tried to learn how to ollie our 3” nosed skateboards over a single deck. Harry has had a lot of ups and downs in his life but through it all he’s remained 100% skateboarder. 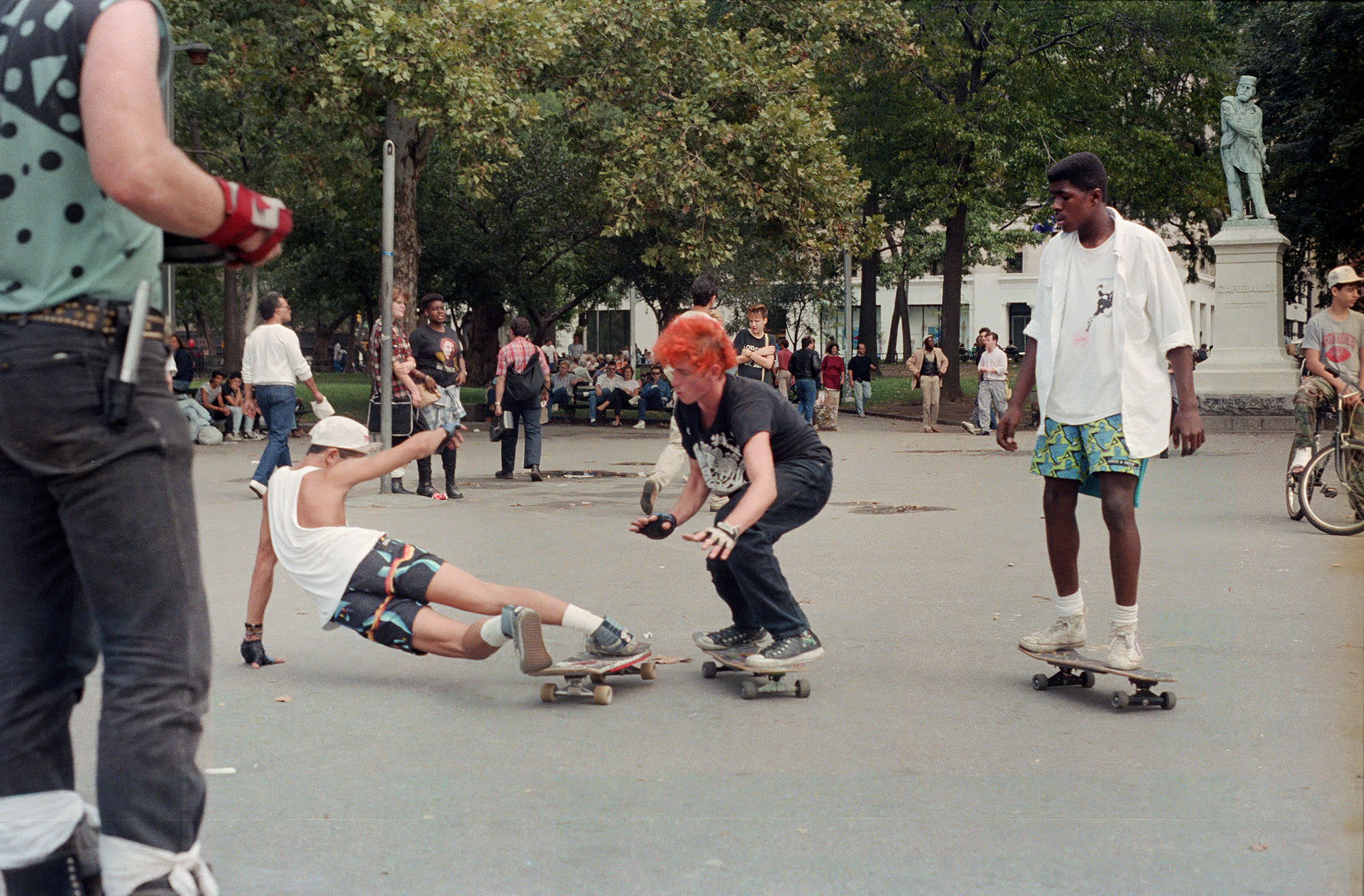 One thing you can say about Harry Jumonji was that he has always had style. Powerslides were super popular in the 1980s. Harry had standing 360 powerslides on lock. Both ways. Grigley is like, “SAFE!” 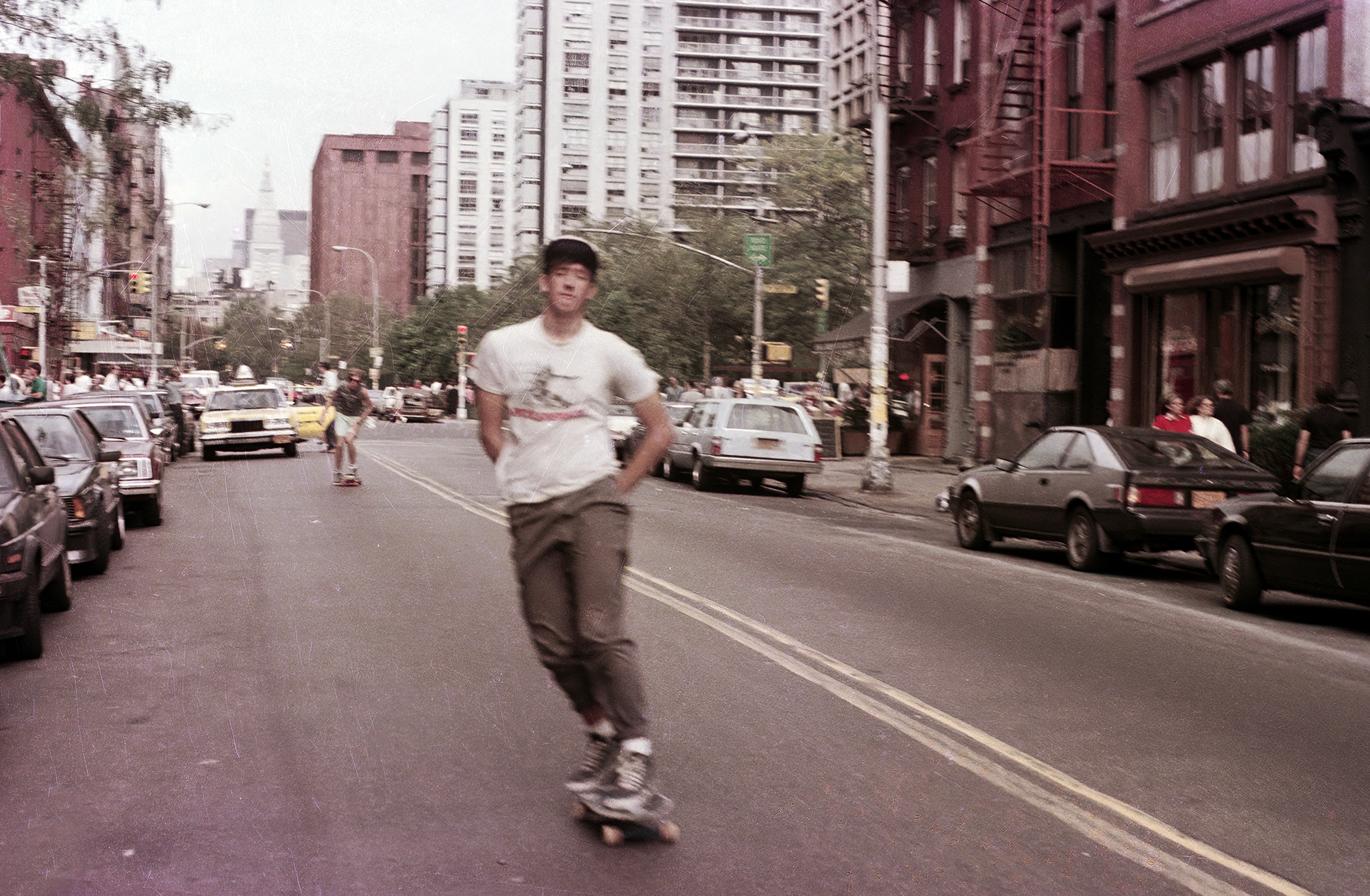 What I like about this pic is that, except for the cars, it could almost have been taken today. I know a lot has changed in NYC but the simple pleasure of pushing down the street with all the buildings rising up around you is timeless. 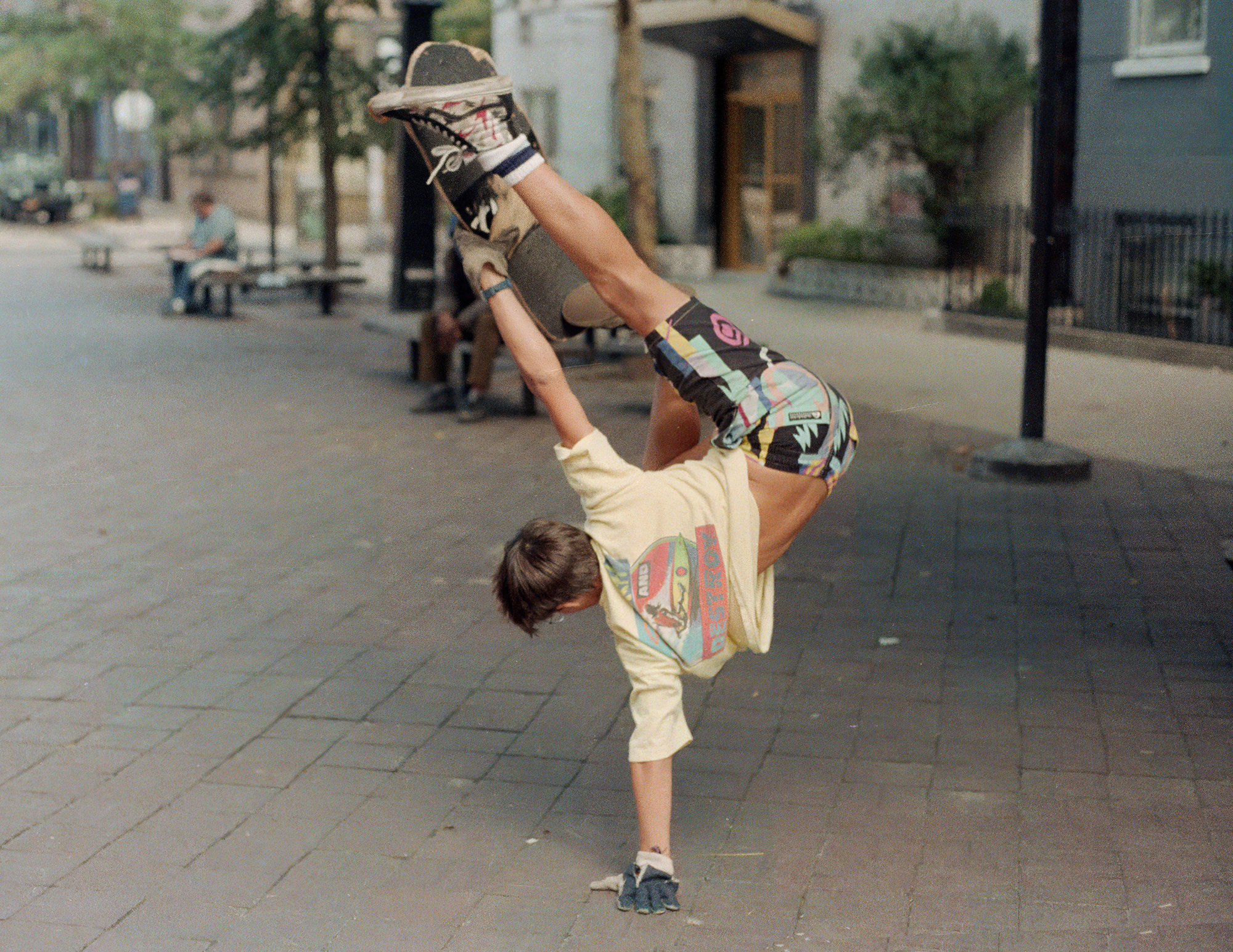 I love this photo. Mario Sorrenti was another local NYC ripper back in the ’80s. I took second place to Mario beating me in our age group at the first Brooklyn Banks Contest ‘Massacre At The Banks’ put on by Bruno Musso. Soon after, Mario quit skating, started writing graffiti (HEST), became a male model, was in George Michael’s “Freedom” video, started taking fashion photos, dated Kate Moss, etc. etc. etc. He will forever be the fucker who beat me at the banks. Deservedly. 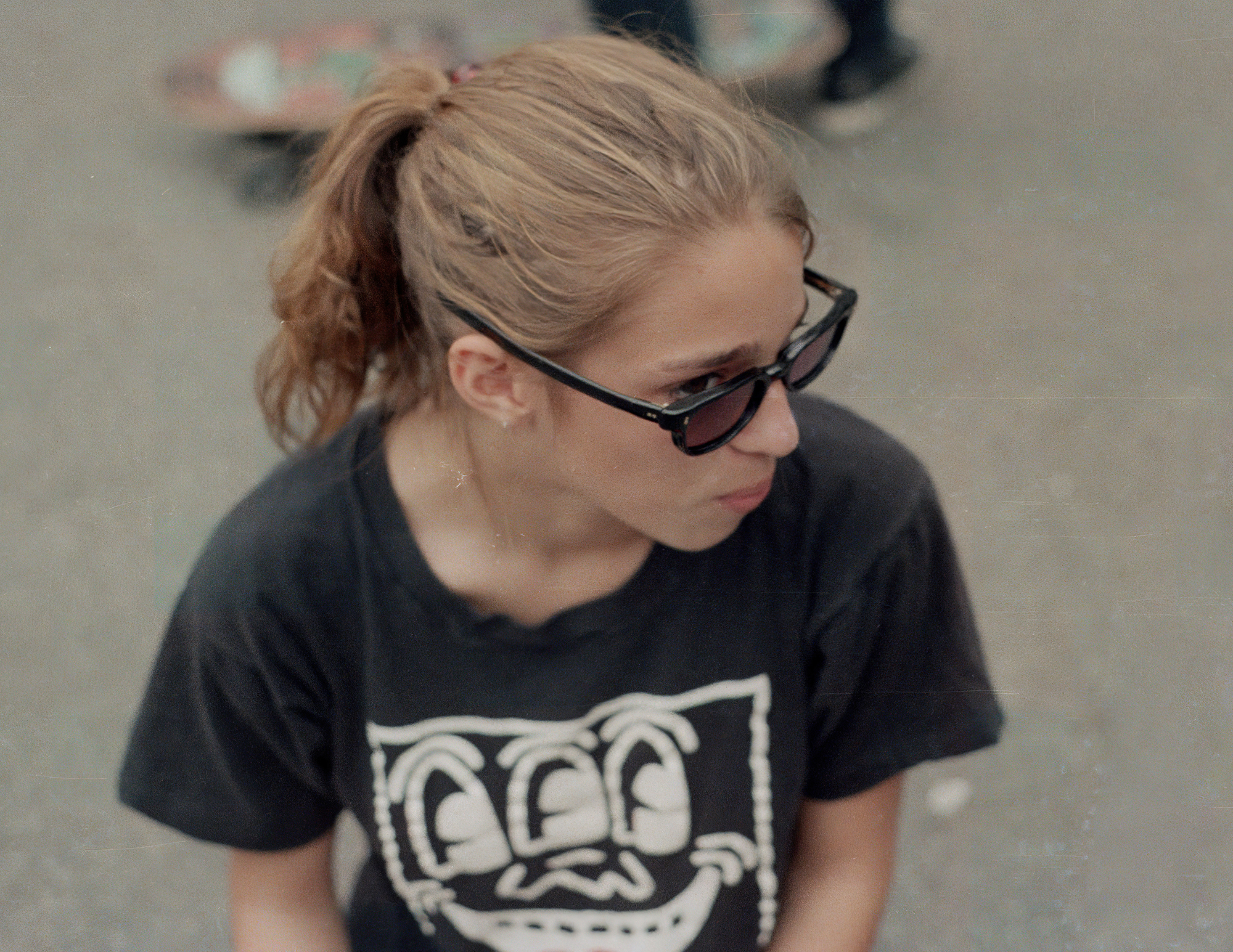 Here is the woman behind all these amazing pics, Stana Weisburd, in a sick Keith Haring tee shirt from 1986. Without her all these moments would have been lost in time like tears in the rain. It’s strange to see how a few pictures shot by a teenage girl and forgotten in a closet can become so meaningful. Just wait 36 years.