THE FALL AND RISE OF DANNY RENAUD 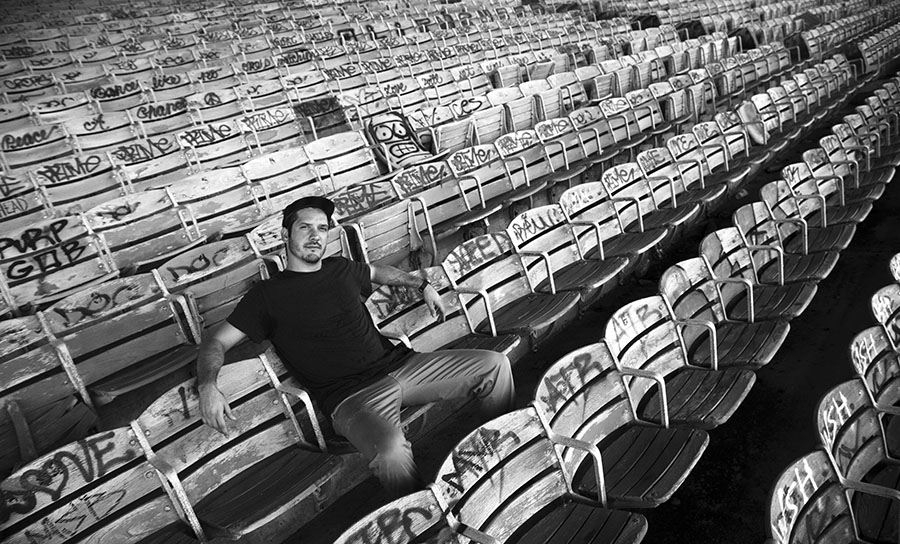 Virtually coming of nowhere, Danny Renaud’s part in the 2003 Habitat video, Mosaic, instantly put him on the map. He became people’s favorite skater practically overnight. Once he turned pro he went on a rampage of killer skating and heavy drinking. His crew, The Dirts, inspired by the movie The Outsiders, raised hell wherever they went. Commenters on The Slap Message Board even went so far as to claim, “On nights when he was bored he would trash hotel rooms, sleep with hookers, and do drugs.”

Then in 2008, I heard a story about Danny falling off of a nine-story building, hitting a guard rail, and dropping to the ground. He apparently landed in a bush, shattered both legs and came damn close to dying. Was it a suicide attempt? Was it a drunken episode? Or just a simple accident? Wanting to find out more, I called him up but quickly realized this wasn’t just a story about hijinks and tragedy, but a story of rebirth and the reawakening of a talented skateboarder.

In this interview, East Coast’s prodigal son talks about his legendary leap of faith, the passing of his mother, getting dropped from Habitat and his recovery after the accident.

You were once quoted as saying, “I got the boot from Habitat for being a nightmare.” Can you elaborate on that?
I had a good run with Habitat, I skated a lot of their boards. I’m probably responsible for depleting a small forest somewhere in South America. I went on a few trips towards the end where I was being reckless and an asshole to the people that were around me. Eventually I got kicked off Habitat but got on Stereo about a month later. I was some punk kid and barely twenty. What can I say, I’m going to hell. But I do feel bad about some of the things I said and did. It was uncalled for and as far as the SLAP forum quote goes, I may have trashed hotels but I never slept with hookers!

Do you look back on those times when you drank with some regret?
I had been drunk most of my life, that is regrettable. I’m just not a fun drunk nor did I get drunk to have fun. It started kind of harmlessly, casually drinking at night with friends. It was fun at first but then it eventually progressed to a point where it wasn’t harmless anymore. I was twenty years old and really had no direction, I thought it was completely normal to wake upon a Tuesday and have a Bloody Mary and go skate. It kinda came with the territory. I wish I had someone to have pulled me aside and told me that I needed to get my act together.

Around that time I heard you lost your mother too.
My mother’s death was a huge loss for me. I ended up spiraling even more out of control because of it. I didn’t know how to deal with her passing, and it ended up affecting every aspect of my life, including skateboarding.

Taking it back for a minute – In 2003 when your Mosiac part came out, what type of response did you get from people?
I got a lot of positive feedback from it. Actually, Habitat asked if I wanted to turn pro but I thought it was too soon. I didn’t want to turn pro so soon after a video part. I still felt that I had more dues to pay before making that transition. I waited about six months after that part to turn pro. But out of all my skate parts I liked my Static 3 part a lot because it’s more recent than Mosaic. The whole vibe of the Static videos is the best and Josh Stewart is the nicest guy. Also Ian O’Conner is the man. Shooting with him during those videos is painless, cause he’s just fun to be around and it doesn’t hurt that he shoots great photos. Big Up, Zion.

Where’d you get the nickname Dirt? Was that a Jon Newport thing or did someone else call you guys that?
I really don’t know the origin of how that came about, but I like to think it stems from that book, The Outsiders. You know how you have the Socs and the Greasers? Well, the Dirts are the Greasers. It wasn’t Newport who coined it, but he’s definitely a Dirt.

In 2008, wandering around at a party, you fell out of a 9 story building. Some people thought it was a suicide attempt. What’s your response to that?
I’m too vain to go out like that. Life is good.

What exactly happened? What were you doing wandering around the building anyway?
I remember bits and pieces of what happened that night. I remember I met these kids out skating earlier that day and they were headed to a party at someone’s apartment that I did not know. After drinking and having over served myself, I ended up falling asleep on the balcony and woke up in the middle of the night, with no idea where I was. After that it all went black.

I remember a janitor waking me up, saying that I couldn’t sleep here, I tried to get up and my legs gave out like an accordion, due to the compound fractures in both of my legs. Next thing you know, I’m in an ambulance. The impact of my fall, basically blacked me out, I don’t really remember what led to the fall. What happened that night is a puzzle for me, and I’m missing a lot of the pieces.

What was the result of the damage?
After the janitor found me on the floor, I was rushed to the hospital and wheeled into surgery. Due to the fall, I had internal bleeding, the doctors had to remove my spleen and part of my pancreas. I had a compound fracture on both my legs, meaning my bones were protruding through my skin. Gory stuff. The doctors put the bones back together and I had pins sticking out of my legs, holding the bones in place. I came out of surgery with two halos around my legs. I got lucky that my bones healed on their own, so I don’t have any pins or plates in them now. I’m all natural. 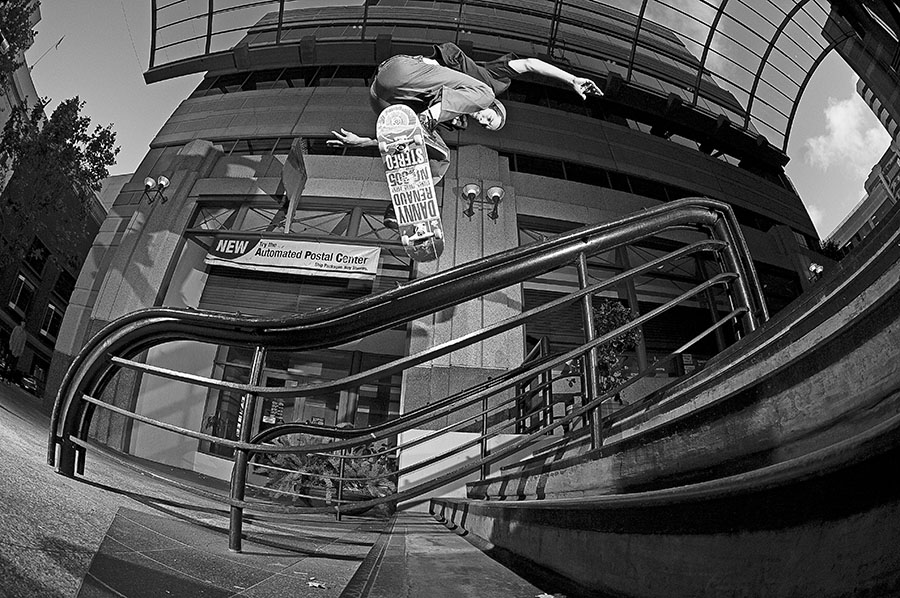 What was the recovery process like and who helped you out during this time? I heard it was almost half a million dollars and multiple surgeries.
The recovery process was hell. I was confined to wheel chairs and walkers. I had a halo around my left leg for about 6 months and one on my right for two years. I had to sleep on my back, coffin style, the whole time. Talk about taking tossing and turning at night for granted. I had to learn how to walk all over again. I couldn’t start my recovery until the halo’s were off. The day I got my second halo off, I walked around a lake that was about four miles. It wasn’t until last August (2011) that I got my last surgery where I had my Achilles heel lengthened and scar tissue removed for more range of motion in my right ankle.

Where did you get half a million dollars or how did you pay for all of it?
That’s how much the hospital was planning to charge my insurance company. But when my accident occurred, I wasn’t insured. So my actual hospital bill is $22,000. I’m on a plan where I pay some of it off each month.

What other types of things have you had to do besides the surgery?
Since then, I’ve done tons of physical therapy, yoga, swimming, gym on the regular, acupuncture and I still do all that roughly three times a week. In New York I met Dan Park, a physical therapist from Queens. Dan happens to have friends who own a skate shop. He told them he was treating a skater and dropped my name, and luckily for me, those guys who owned the shop knew who I was. They showed him a video and the next time I saw Dan, he told me that he would see me pro-bono three times a week to get me on a skateboard again. Mitch, who is also his partner, helps treat me as well. Those guys help me out a lot.

”The doctors had to remove my spleen and part of my pancreas.”

Did you ever think you would walk or skate again?
Walk? Sure. But skating? I didn’t know. I mean I was hoping I’d be able to skate again.

How did Stereo skateboards support you during this period?
Stereo really looked out for me as long as they could. They were just waiting for my recovery, because at that point no one knew how long it would be. What were they supposed to do? Keep me on their roster for two years? Eventually they stopped making my pro model board but I really enjoyed riding for Stereo, those guys, Clint and Dune are good peeps.

Has your perspective changed on drinking?
My perspective has definitely changed towards drinking. I approach alcohol like an adult responsibly. I never want to lose my composure ever again and that’s why I don’t party anymore. I will say binge drinking is probably the most dangerous thing one can do next to bull fighting and bull fighting while binge drinking. Skating and drinking is not a good mix, keep it in check. 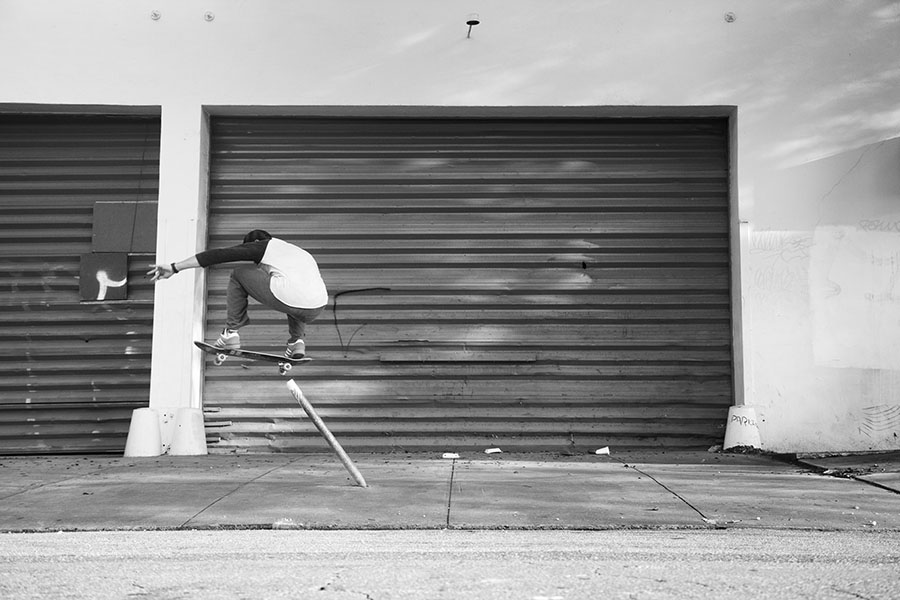 What have you been up to lately?
I’ve been skating a lot, trying to get this footage for Mike Atwood’s upcoming video, Incognito, which should be good. All the Florida homies and then some. So far I’ve got a small part, but you know how it goes. It’s a nightmare trying to film, but I’m working on it. I’m also taking some business classes in New York because eventually I would like to start up my own small company.

How long have you been skating of recent and how do your legs feel?
My bones mended well, but I will say that when I first got on a board after two years it felt a bit weird. I had no balance. It took a while for me to finally get my rhythm back. I got lucky, my legs move the same way as they did before so I didn’t need to re-learn tricks any differently. Now it feels pretty normal, I’ve been skating for ten months. I officially healed from my last surgery back in August and in those ten months, I’ve had the pleasure of skating Paris, Berlin, New York, Miami, and Nashville.

Do you think you will be able to skate as well as before the accident? Do you skate things like gaps or handrails differently?
My skating is coming along. Every time I go out, I see progression. I never really skated handrails and if I did, they were like six stairs, max. So, I could deﬁnitely skate a six stair handrail.

If Habitat were willing to put you back on the team, what would it take for you to say yes?
That would be too awkward and it’s not likely.

Personal thanks
I would like to thank my family and friends. Joe Perrin, Josh Stewart, MIA, Ian, Dorsi and Fred at Domestics, Dan Park and Mitch over at Sports PT of New York and everybody else that has helped me along the way.