WE ASKED A SPORTS GAMBLING EXPERT ABOUT BETTING ON OLYMPIC SKATEBOARDING 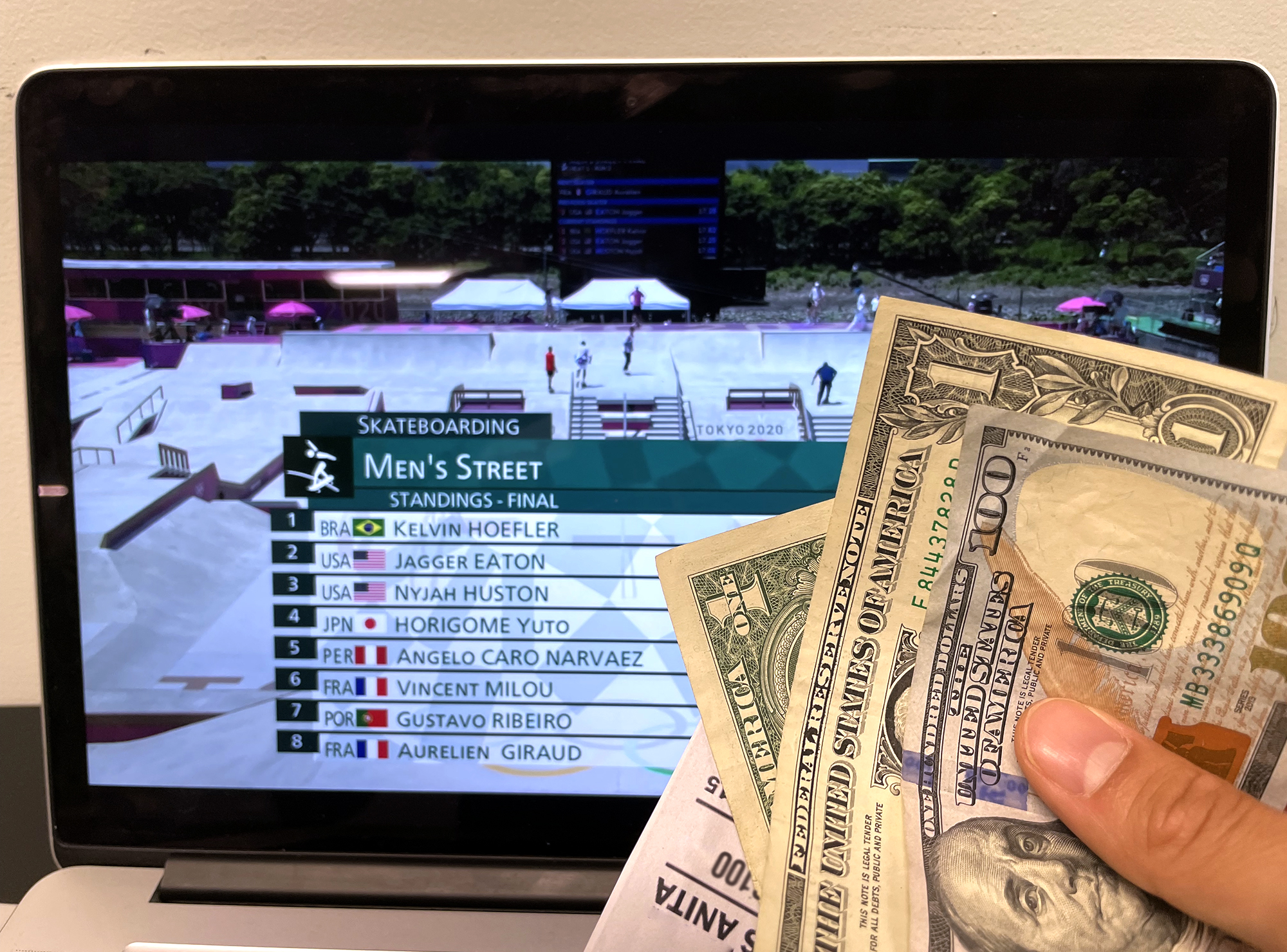 No matter how you feel about skating being in the Olympics, there’s no denying that it’s been an exciting time for skateboarding. Competitive skating may be stale, but one factor that has added some spice into the mix is that sportsbooks have opened up betting for skate events. That means we can all put money down on our favorite skaters and actually have some sort of stake in the game while watching, instead of just twiddling our thumbs giving armchair critiques to a guy in Cariumas.

We know gambling’s not for everyone, but for those who are interested in being degenerates, we tracked down a professional sports gambler to ask about how odds are calculated and if the betting world really is as grimy as they make it seem in movies and TV.

What’s the deal with the legality of gambling on sports in the USA?
We have a situation, like marijuana, where half the states are legal and half the states aren’t. Just the other day, I was in an Uber on my way from New Jersey to New York playing poker on my phone and I was playing up until the bridge. Literally, as you cross into New York the app will turn off and say “your geolocation…” So that’s where we’re at, but it’s changing.

You can bet on skateboarding online, but are there still old-school bookies around in person?
Yeah, some people bet through illegal bookies in New York still. Many of them have been in the business for a long time, I’ve known one guy for 25 years. We’re from the same town.

Is it sketchy dealing with them?
I know a few bookies but I don’t know who is at the top. It’s nothing in terms of hardcore gangsters by any means though. It’s a credit business, meaning you can make a bet with a bookie and don’t have to pay upfront. It can get dicey. That’s one difference between legal and illegal gambling, because for all of the legal gambling, you have to put the cash up front, and you can’t bet if you don’t have it.

With the bookie, if you lose money, you have a week to get it back to him. That’s where you hear all of the stories about not having the money, getting on a payment plan with them, high interest rates. If you go to a loan shark, that’s the classic gangster Soprano’s situation when you get yourself in trouble. 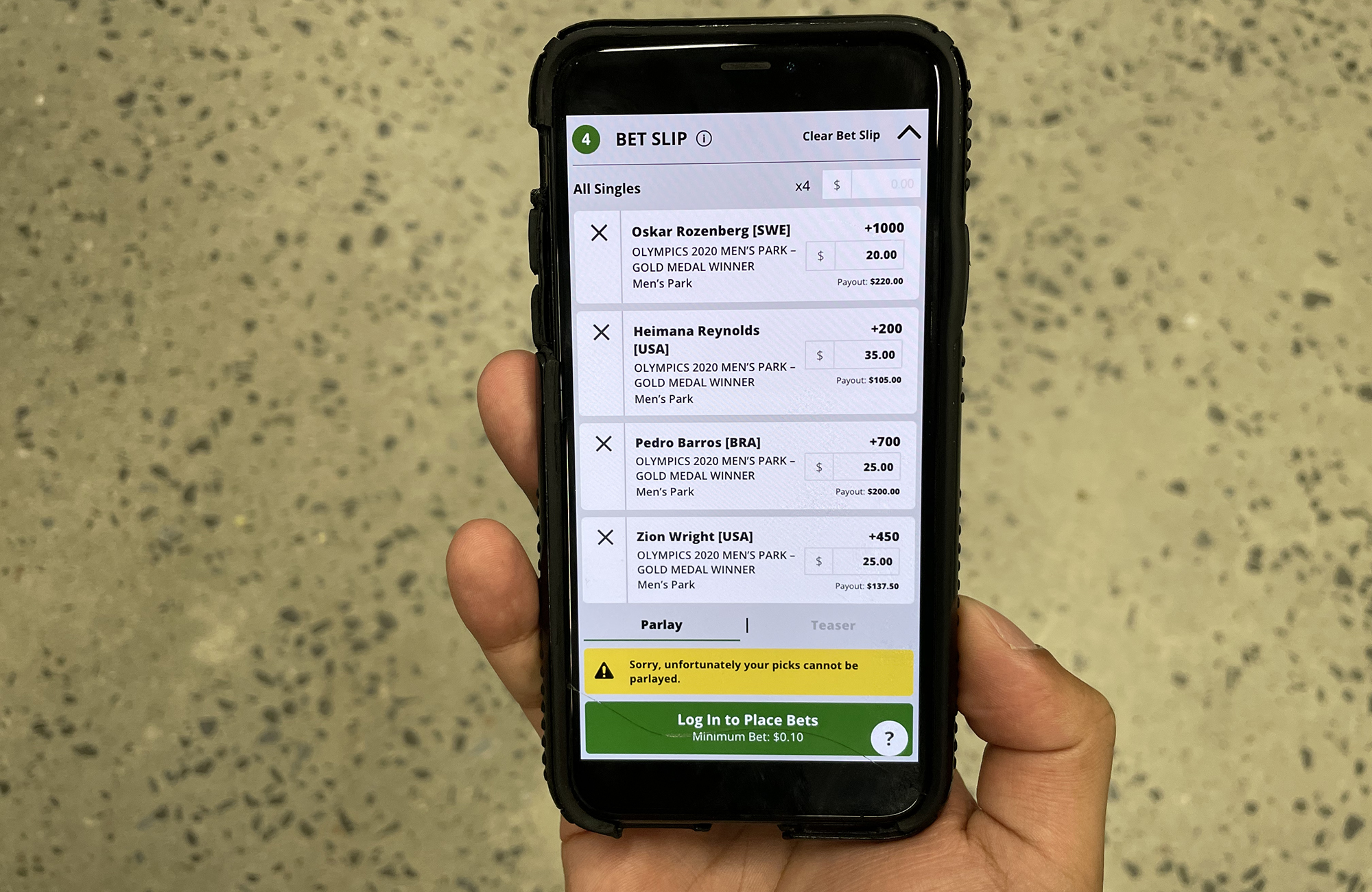 Do you think there’s a lot of people excited to bet on skateboarding in the Olympics?
Well, there’s a site in the UK called Betfair which is a gambling market where buyers and sellers match up. For instance, with a soccer match, one person is saying I think Machester City is going to win, another person is saying I think Manchester United is going to win and they’re meeting at a price, just like how a stock price is formed. But at the end of the game, one is going to be a winner and one is going to be a loser. It’s a clear result. Then the site takes 5% from the winnings and that’s how they make their money.

Right now when I check men’s skateboarding on there, there is a marketplace, but there’s nobody really participating yet. There is someone willing to bet on Pedro Barros, but that’s really it.

“The amount of money that is bet within the match is just astounding. Every single point is being bet on.”

So basically there’s a market for skating but not many people are participating and making bets?
Exactly. Maybe as you get closer to the event you can see some action, or maybe even as the event is occurring you could see something. For comparison, soccer will have millions of pounds on every match trading hands.

You can bet during the event?
Yes. So live betting, betting within the game, has become very popular in the US over the last year or two on sites like Betfair. You can’t do it in the middle of a free throw but during timeouts, especially in the NFL, you know you’re going to have a two-minute timeout and now you will have two minutes to go on these sites that are offering live lines. Tennis matches are fascinating to watch, and the amount of money that is bet within the match—like while it’s going on—is just astounding. Every single point is being bet on.

How do the bookies calculate the odds payout for skateboarding in the Olympics?
They calculate odds by past performance. They’re going back to all these events that the skateboarders competed in before the Olympics. Any time they compete against each other, they’re looking at that and boxing them up. They have computers now and algorithms coming up with the best values. You can just plug in past performances and the computers spit out the odds.

A lot of different sites offer the same odds. Does that mean other sites just copy each other?
Very much so. There are a lot of copycats. 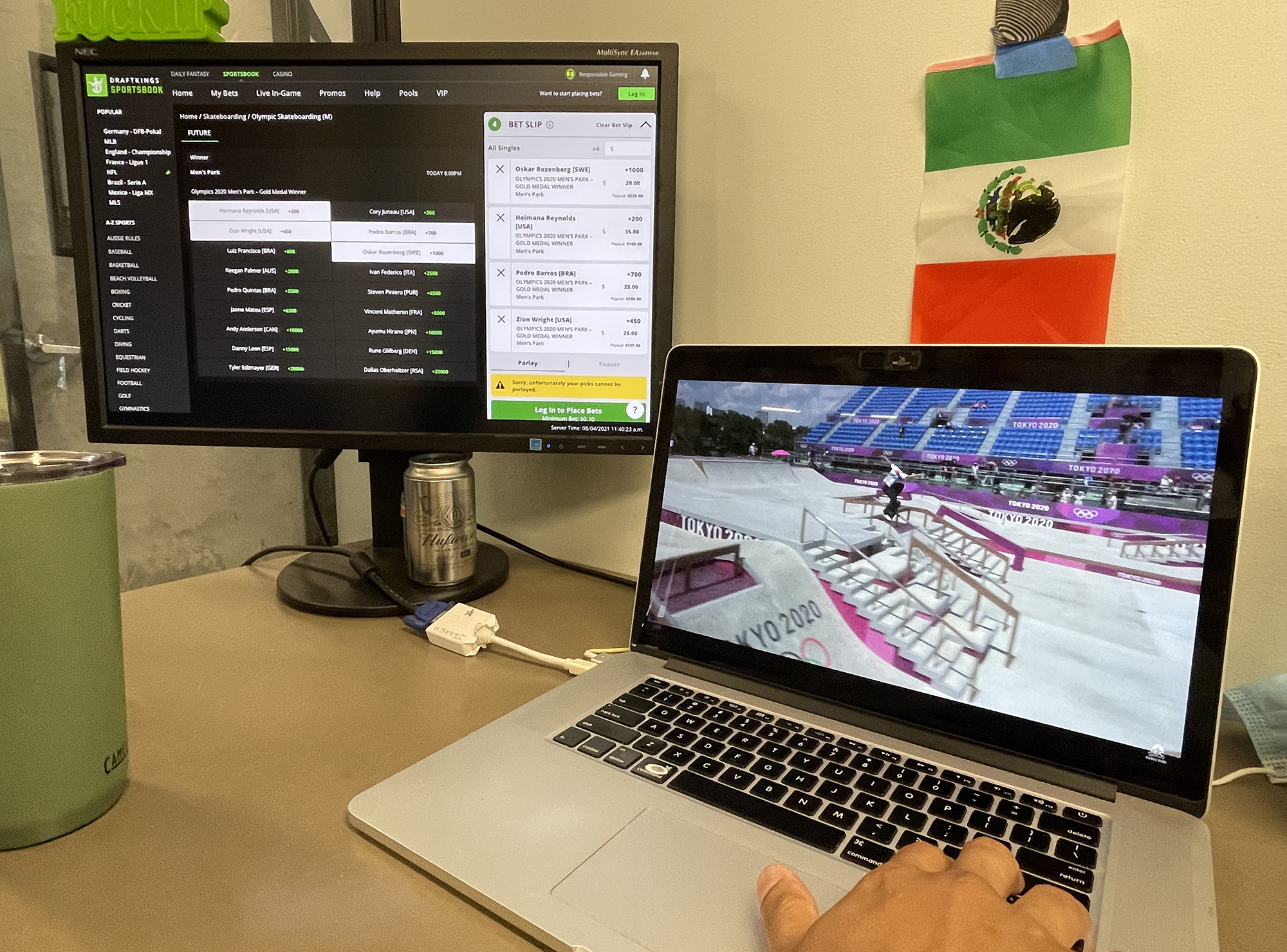 It’s just crazy because I’m not sure what they are basing past performance off of. Many of these skaters have never skated in the same events together and there’s not a lot of past competitive history.
If the odds are off or unfavorable for them and bets are coming in they’ll cut those odds and start to learn something from those bets.

Let’s say your odds are 20/1 and a lot of people are going in on the bet. In the future, they can offer that bet to 10/1 odds, and then they’ll see. So with the data, they’ll change the odds so it’s healthy for them.

Can the odds vary city to city or bookie to bookie?
You might see some local bias. A sportsbook in Chicago might have different lines on games with Chicago teams than New York games, but it’s not too out of whack where you could have an arbitrage.

What’s your background?
My day job is trading futures. I used to trade in the pit in the 2000s when there was a trading pit with human beings screaming and yelling. Now it’s all computerized. In my 20s, I was gambling kind of professionally. That’s how I paid my bills and paid my rent. Ever since I’ve become a trader, sports betting has become a hobby. I also talk to Australian sports radio about American sports as a hobby. I’m giving out tips, gambling markets, all of those kinds of things.

In the ’80s on the trading floor were people doing a lot of coke?
I can only speak to the 2000s, but I’m sure in the ’80s there was an incredible amount of cocaine because in the 2000s there was a ton of cocaine [laughs]. In the bathroom stalls of the trading floor, there’s an inch-long metal thing that holds the toilet paper that would always be covered in cocaine residue.

Was more for functionality over partying?
I’m sure it was for partying too, but there were guys where it was a functional thing. The thing that was bad in my era was the pills – Vicodin. We had these generics and you would get a tolerance, so guys would go to two to four to eight to handfuls. We lost guys because of it. A lot of guys had kidney failures and had to go to rehab. Luckily, I didn’t get involved in that. 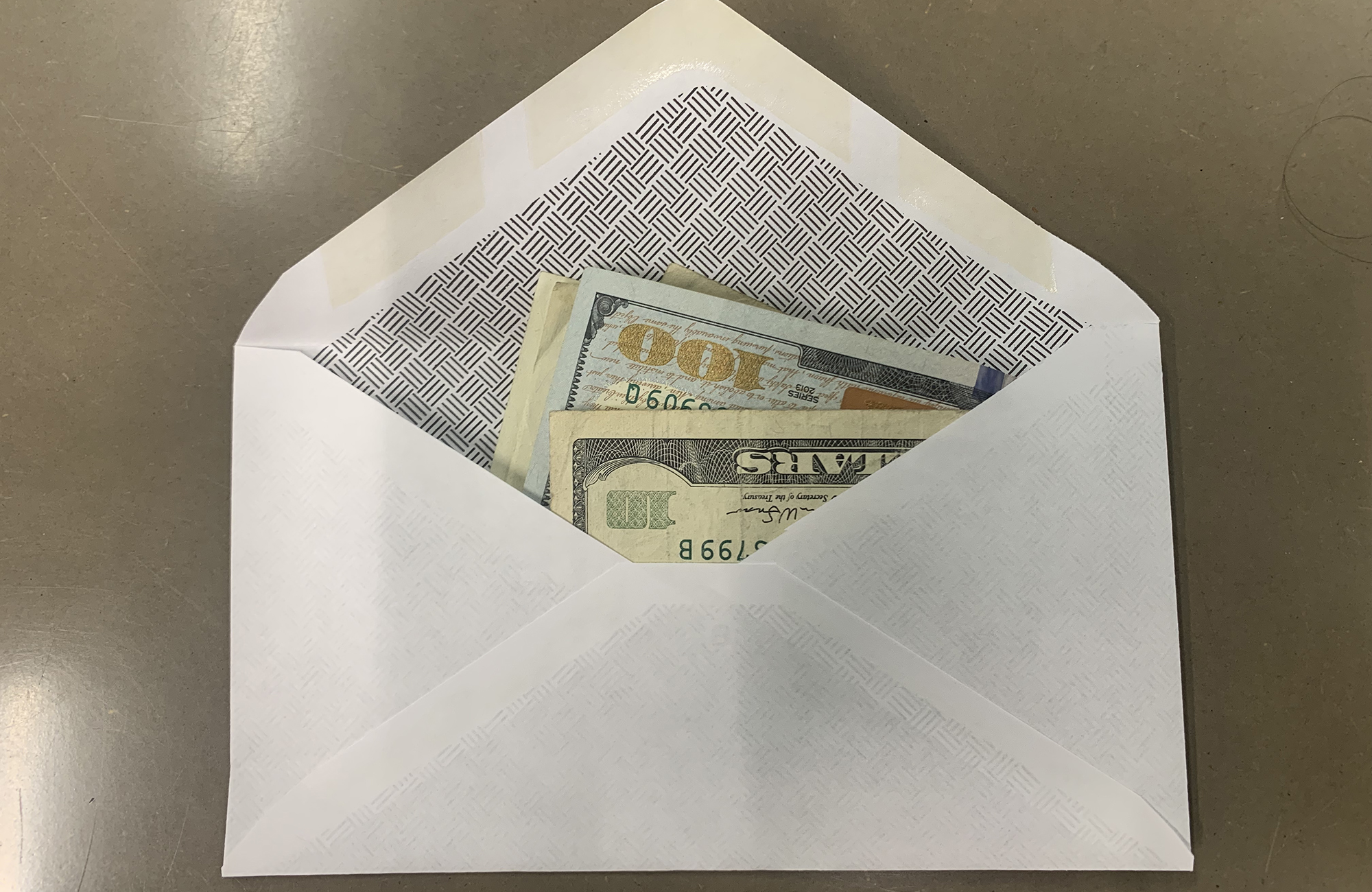 Are you gonna bet on skating?
I won’t be betting, but I would if I thought I had an edge on something. Anything there’s a market on, I’ll bet if I think there’s an edge. The only thing that is tricky is the trapping-type things in gambling. Things will look too good to be true, and sometimes they are set traps. I’m not saying that’s the case here, but very classically, like in the NFL, you’ll see something with good odds, and they are just begging you to bet that one side. Sure enough, so much of the public does just because the odds are so tempting but still unfavorable.

There’s also a big difference between a game where there’s a clear-cut winner: team A vs team B as opposed to who’s gonna win the gold among 30 skaters. What ends up happening here is that they put the odds in their favor and that’s how the bookies really make their money.

Say there’s a skater that really doesn’t have a chance at all and he should be like 500/1 but they list him at like 50/1 odds. People will still bet on him because they like his name or they know him. But you don’t always get the fair odds and it’s very unfortunate and a lot of gamblers get ripped off that way.

Yeah, it’s really hard to predict out of 20 people who will take gold.
What you could have in the future, when it gets more popular, is head-to-head betting. Like Yuto vs Nyjah – which of these two will finish ahead? And if they are very even, that would be similar to betting on a football game like the Jets vs Giants. They are both playing, the bookie gets 10% commission, but the betting odds are closer.

This happens in golf a lot. A big golf event has 150 golfers and they ask who’s gonna win. Then they also select five popular golfers and ask out of these five which of them will be the best. As skateboarding grows these types of bets may become available.

“Discipline is the most important thing. The ability to be logical, mathematical, and not emotional.”

For someone looking to get into this, what are the traits of a great sports gambler?
Discipline is the most important thing. The ability to be logical, mathematical, and not emotional. You have to bet very systemized. This can be for any sort of trading, you have to follow the numbers and odds, ignore the names, the things, the emotions that the average gambler—who are losers—pays attention to.

The idea is you start with a bankroll, and that bankroll doesn’t even need to be that big. Can be $1,000, and then just say, alright, you bet 3% of that. That’s how you start thinking about it, so you’re making $30 bets, and you win a couple, so then your bankroll goes up and your bets go up by that same percentage. That’s how the pros do it; start with the amount you’re willing to lose.

I think this year is the best year to bet on skaters in the Olympics because the odds could potentially be more in our favor, compared to next year. The bookies will have data from this year to calculate better odds for themselves. Does that make sense?
Yes, absolutely. You got it exactly right.