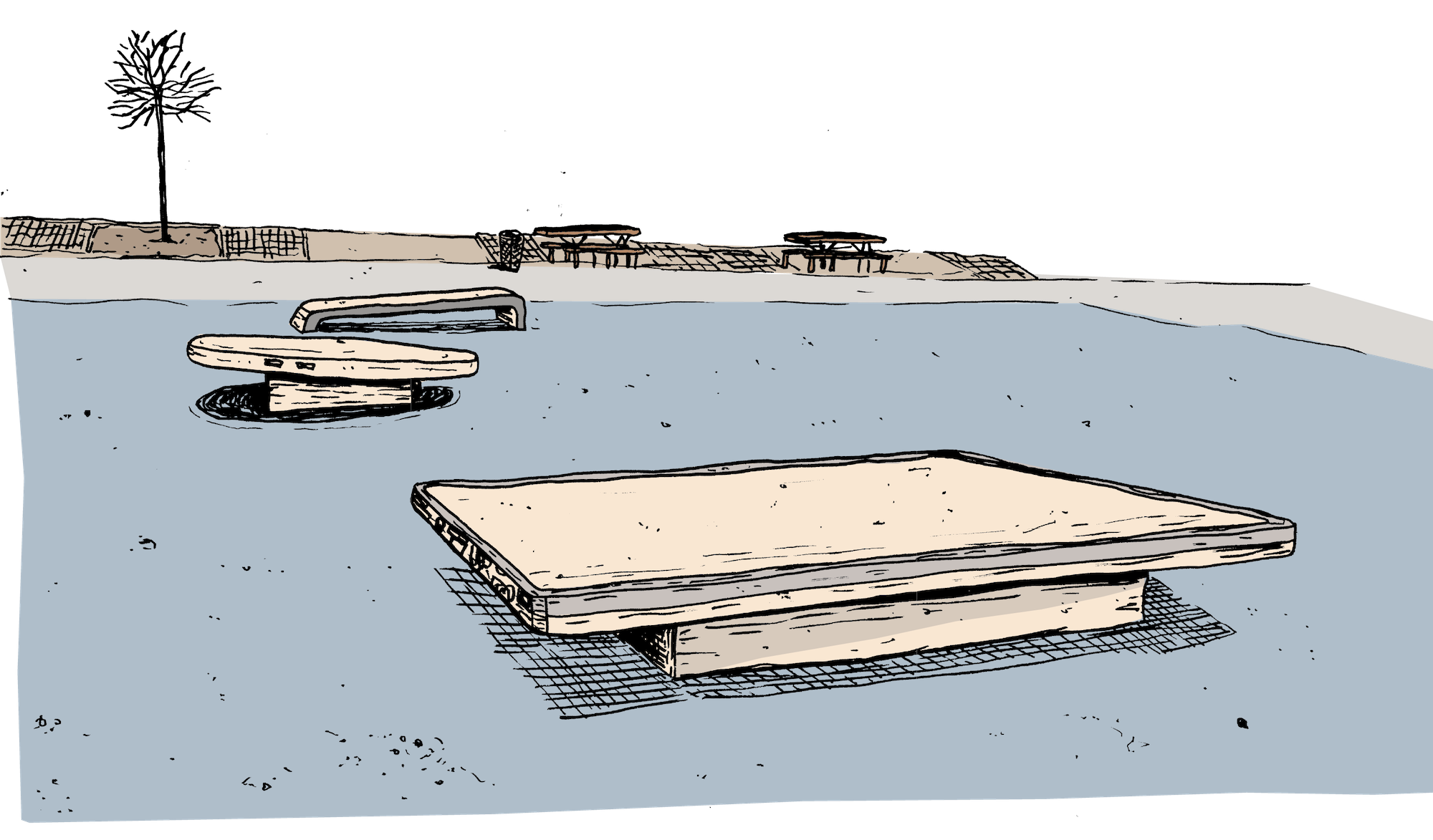 Two years later, one Friday afternoon, my colleague knocked on my classroom door and told me there were some guys from the city trying to install some skate objects onto the playground that was being renovated, but they didn’t know where to put them. I had no idea what the hell he was talking about, so I finished grading my kids’ notebooks and walked downstairs about an hour later.

By the time I got to the yard, the guys from the city were gone, and the park had three funny-looking concrete obstacles right in the center. I sometimes wondered if I’d gotten down there in time if they even would’ve listened to me and what I should’ve/would’ve said… It doesn’t matter though; you can’t travel back in time, and the best features of the park were yet to come.

The city had begun a renovation to the playground coinciding with the arrival of the highly selective Brooklyn Latin High School into the building. As part of the renovation, the city painted a large swath of the freshly repaired concrete yard blue and installed three simple skateable concrete objects. 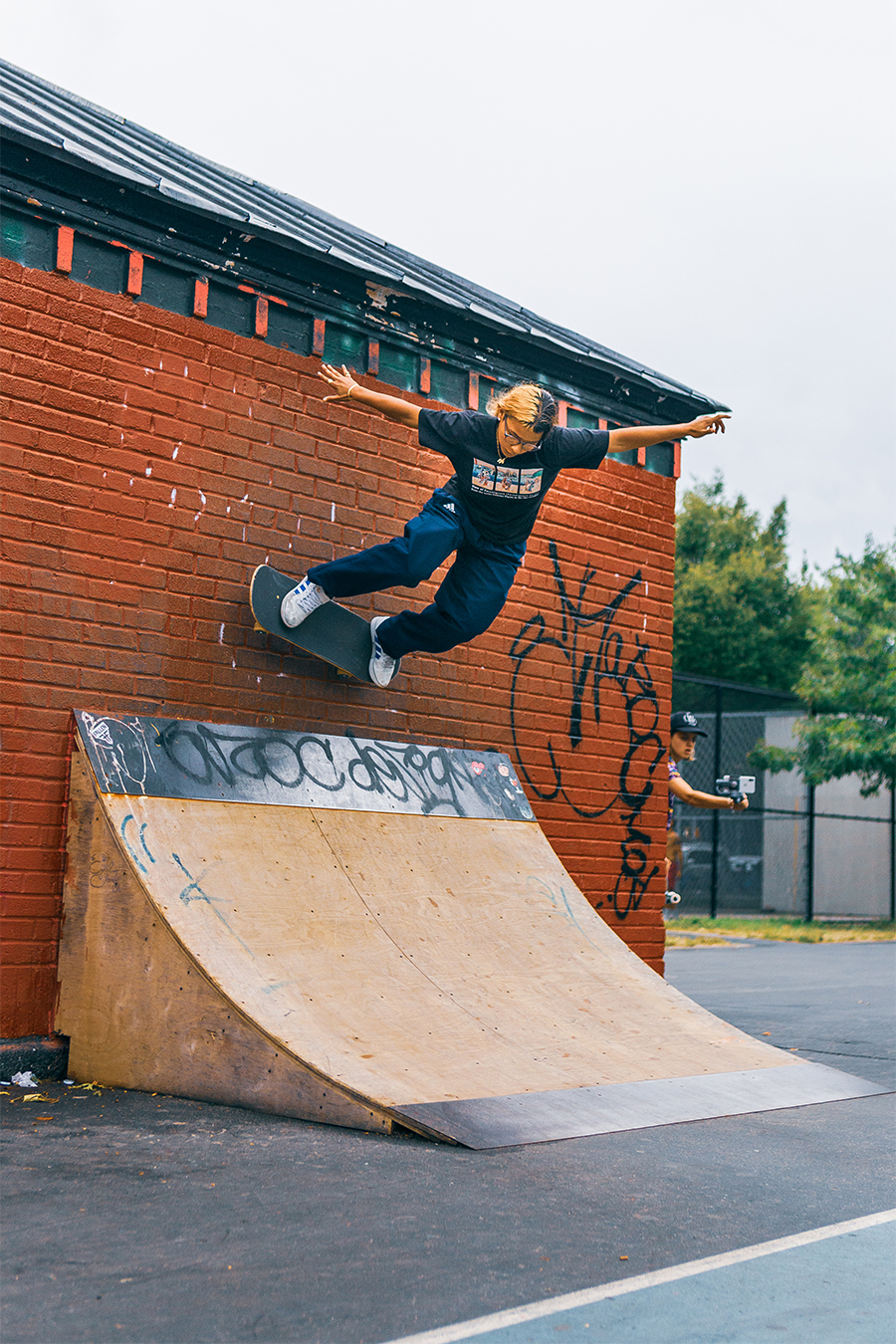 Shortly after, various local skaters and DIY builders began enhancing the park by dropping off their own obstacles. Pretty soon, the DIY components far outnumbered the original three city-approved objects. With the city’s laxness in allowing skaters to leave obstacles in the park, Blue eventually grew into a place everyone wanted to skate, a central hub for the NYC skate community. There have been countless events, sponsored by Tenant Skate Shop, Labor, Supreme, and various shoe brands, along with queer skate meetups, Briana King’s “Push Like a Girl” event, punk shows, and thousands of regular ol’ epic sessions. Tyshawn Jones even kickflipped a picnic table there, flat ground, the long way.

Pat Smith, pro skater, owner of Coda Skateboards, and builder who has contributed many obstacles to the park reflects on the collaborative and organic way Blue Park developed: “There is a sense of belonging and community that can’t be achieved by spoon-fed parks. Blue Park was a blank canvas and the community painted it. It stands as our work of art.”

“Blue Park was a blank canvas and the community painted it.
It stands as our work of art.”

However, if you go to Blue Park today, the only skate obstacles you’ll see are the three that the city originally installed a decade ago and perhaps a slappy curb or two.

Rumor has it, in December of 2021, a teacher broke his toe attempting to move an obstacle and called the city to file a complaint, leading the Parks Department to wrap caution tape around the DIY obstacles and state that they intended to remove the objects. Fortunately, the skate community mobilized quickly and “stepped up and moved everything they could,” says Smith, regarding the near-overnight transportation of obstacles to a new spot under the Kosciuszko Bridge. 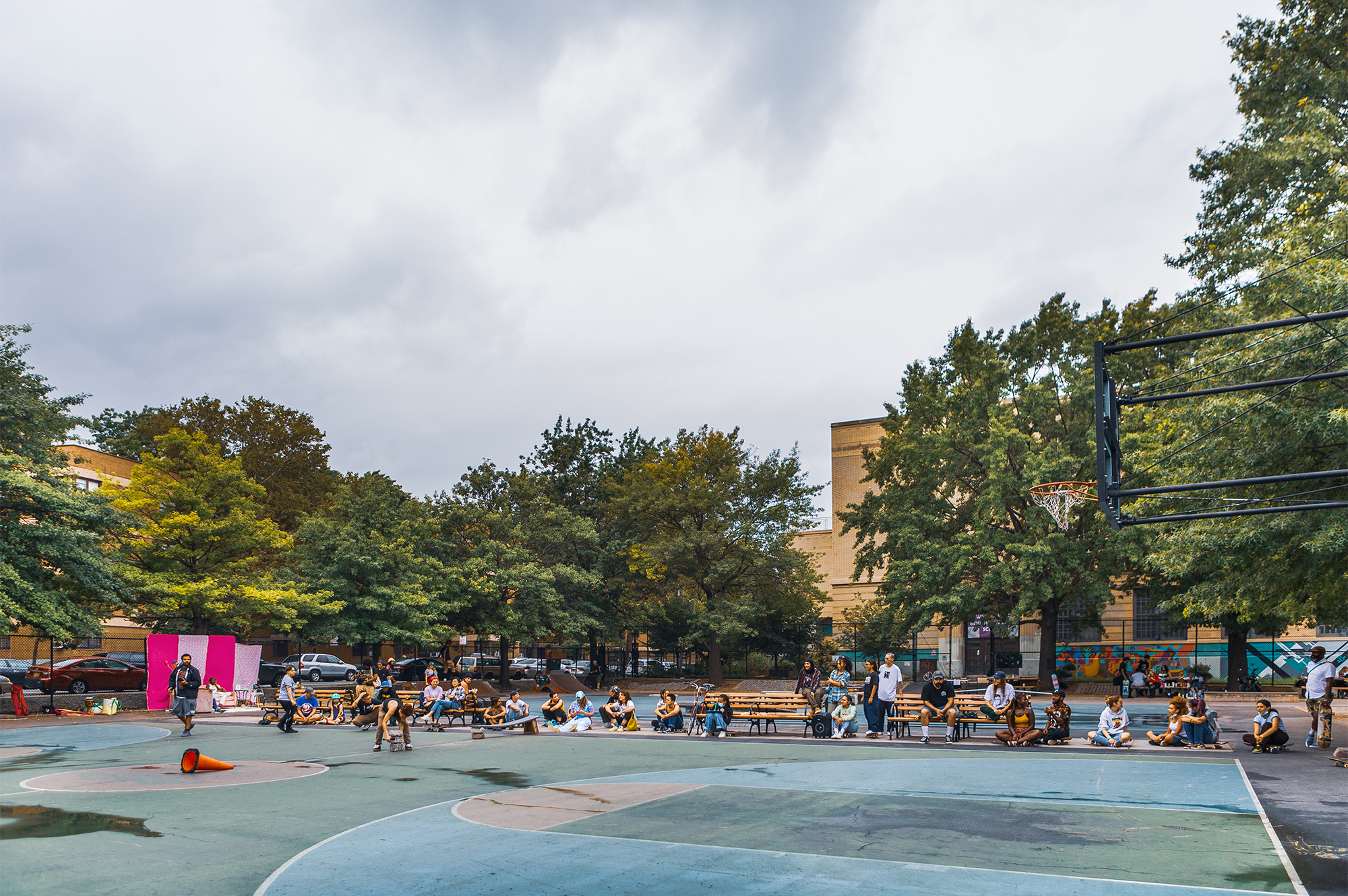 If we rewind back to 2011, before Blue Park was even blue, the playground “was just a super crusty park to play ball,” according to Axel Mosso, one of my former 6th-grade students, who has since grown up into an adult shredder. Back then, there was wasn’t a skater in sight.

When the playground renovations began, some teachers in the building greeted the development with an eye roll. We were frustrated by the pattern of the city pouring resources into magnet schools and charter schools that are next to high-poverty public schools. Why had the city never revamped Lyons’ playground before Brooklyn Latin moved in? Why hadn’t they given us a decent gym? Air conditioning? Didn’t our kids deserve those things all along, before the new school arrived?

At the same time, it was nice to finally get a facelift that our kids would benefit from, so long as our school wasn’t eventually pushed out by the newcomers.

Within a year the renovation was done, and as anyone who has skated Blue Park at around 11:30am knows, recess now had a skatepark in the middle of it. Mosso recalls the humble origins of Blue Park fondly: “I remember the weird manny pad, the hubba, and the circle thing in the middle being there for years. Occasionally someone brought a kicker or a ledge but they weren’t high quality so in a couple of weeks there be a hole in it and you’d eat shit. The only things that would last for a while were slappy curbs.”

“Blue Park had turned into a hybrid DIY/skate plaza, launched by the city, but enhanced by the local skate community.”

But soon enough, after skaters noticed things weren’t getting removed, higher quality obstacles were introduced. Smith says, “There were big leaps, usually with funding. From me and CODA doing well personally, to Labor and Tenant getting involved or a job for Adidas, or Nike or Vans [leaving leftover ramps]. Why throw ‘em out? Upcycle that stuff.” Blue Park had turned into a hybrid DIY/skate plaza, launched by the city, but enhanced by the local skate community.

In addition to being a school playground, Martinez Park had always been a vibrant community gathering spot, where people from the neighborhood hung out, played basketball and handball, bought and sold tasty empanadas, and generally chilled. It had now become a place where on any given day 50+ people would be skating there at a time. I spoke with several teachers in both schools about their thoughts and feelings about the skate park and their general take was positive. 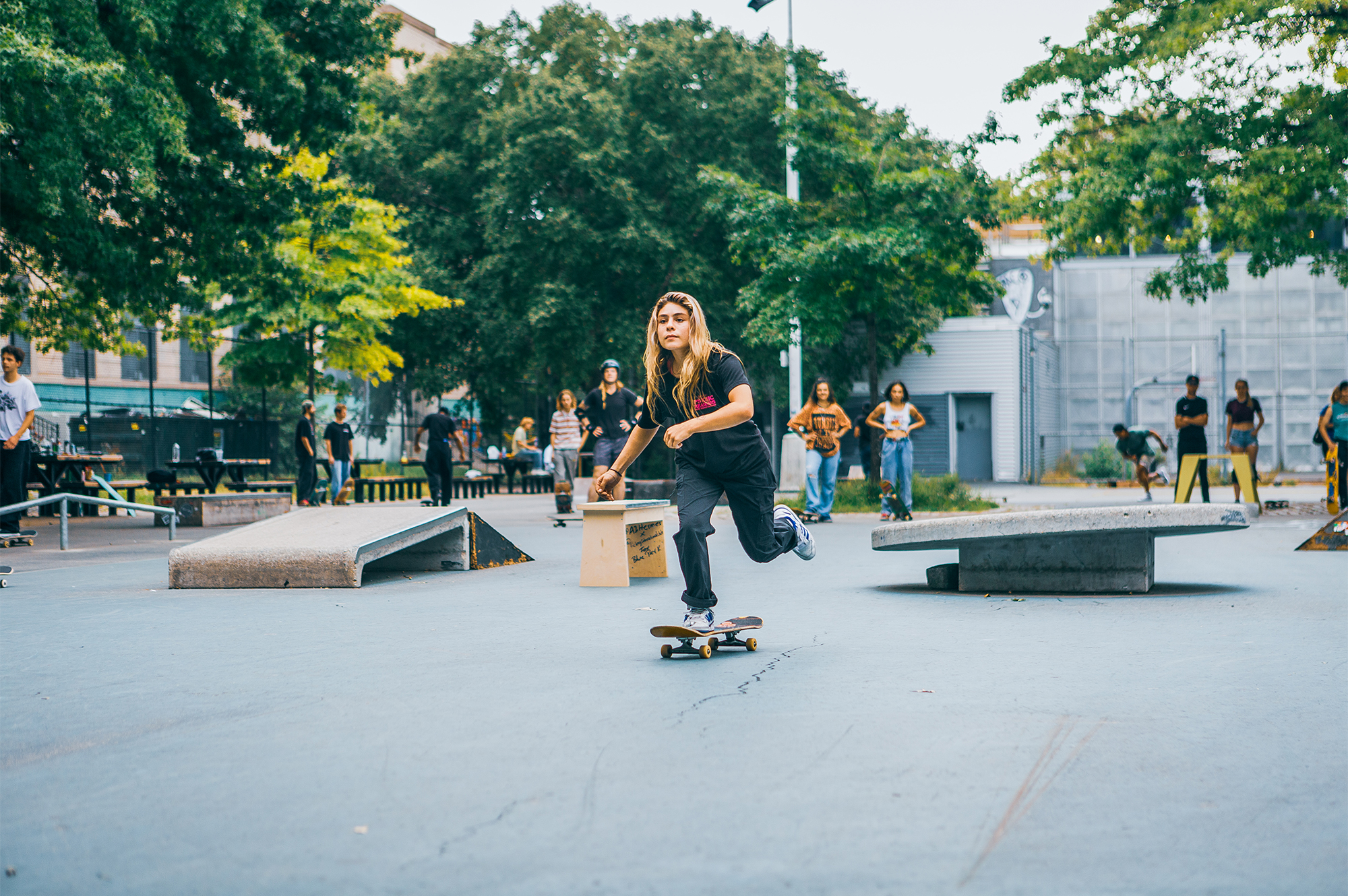 One teacher from Brooklyn Latin let me know he felt that, “Skating is cool. I respect it. I used to play Tony Hawk and I can tell the skaters there are really good.” But he also acknowledged the difficulty of sharing the space with skaters. “Some of us find it’s a problem when there are people smoking weed and pounding beers at the picnic tables where the kids are supposed to eat lunch.” I’ve been at Blue Park when a fistfight broke out between some young basketball players and skaters. The hoopers wanted to run a five-on-five and the skaters wanted to keep skating the little funbox placed right in the middle of the court.

“It’s a classic New York City dilemma: how do diverse communities find a way to get along in a tiny space?”

When asked how to address the challenges of sharing the space with skaters, ballers, and students, Craig Willingham, a skateboarder who has helped lead efforts to advocate for restoring and updating Blue Park, wrote me, “The only thing we can do is highlight for all skaters who use the park the multi-purpose and sensitive nature of the site and ask them to be respectful.” Perhaps I’m being preachy, but from the perspective of a skater and teacher, it seems there are some simple sacrifices that could make Blue Park more sustainable. Perhaps the bong should remain in the backpack when there are 11-year-olds trying to eat their fruit cups and play tag? Perhaps the little funbox (RIP) should not live on the basketball court? Perhaps when the volleyball scene starts popping off, skaters should refrain from asking for one more try?

The reality is the park is for everyone, and skaters are the newcomers. It’s a classic New York City dilemma: how do diverse communities find a way to get along in a tiny space? We get to decide as a community and as individuals what kind of neighbors we want to be. 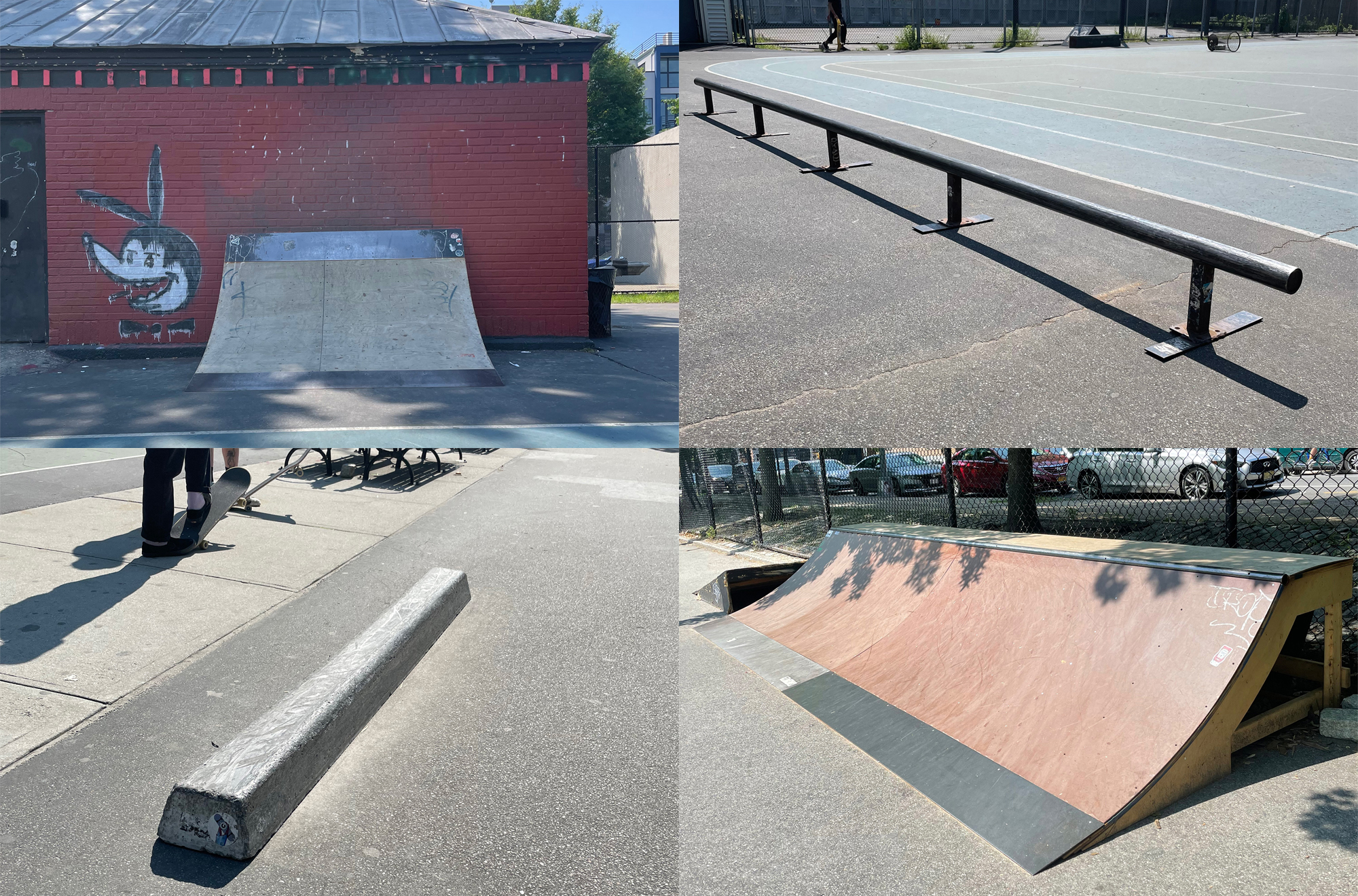 After leaving the school and teaching elsewhere for a few years, I stopped skating at Blue Park because being there felt like being at work. But this last summer of COVID I started skating it again. Lo and behold some of the kids I taught there were skaters now. Some of them ripped. Instead of cheering for their homies for jumping off desks, they were hooting for slappy crooks and tailslides. The same kids who were robbed of their 6th-grade playground were enjoying the new park and clearly had been for years. The park had helped shape them into healthy adult skaters.

Mosso talks about the central role Blue Park played in his coming of age: “I definitely grew up at Blue. Before school, I was skating there. At lunch, I was there. After school, I was still there. Blue was my second home for most of my teenage years.” And he reflects on the loss of it being semi-dismantled: “It’s unfortunate that Blue has lost its DIY [obstacles] mainly since they were its appeal to most and stood out compared to all the other parks in NYC. There [was] always something new to skate at Blue Park. The person who broke their toe is a bozo for moving shit around. He should have left it the way it was. I’m calling it out, that’s some Brooklyn Latin shit.”

“The person who broke their toe is a bozo for moving shit around.
He should have left it the way it was.”

Mosso’s comment brings up some of the complex tensions in a rapidly gentrifying neighborhood; One could argue that the skate park wouldn’t have come to exist without the added resources that poured into the building and playground with Brooklyn Latin School’s arrival. However, Brooklyn Latin is seen, by some, as the entitled neighbor privy to extra resources and privileged to define the terms of how the enhanced spaces are used. Some view public magnet schools as an opportunity for low-income and middle-income students to gain access to quality education, eventually granting them access to other elite institutions and upward class mobility.

The skatepark’s semi-demise and hopeful return, illustrate the dance the city does with skaters, allowing skaters to exist, sometimes even encouraging them, knowing that first come the artists and graffiti writers and skaters, and then the yuppies, and eventually, you get skyrocketing property values and Williamsburg high rises.

Perhaps it’s a cynical way to frame it, but one has to wonder what the financial incentives are for what happened at Blue, both its birth and its current challenges, as well as what’s happening with the proliferation of legal graffiti murals and intentionally skateable ledges under the Kosciuszko Bridge, the zone which has now become the new Blue Park. One has to wonder what will happen there in a decade when we skate below the luxury condos that will inevitably replace the current scrapyards and someone walking a dog breaks their toe 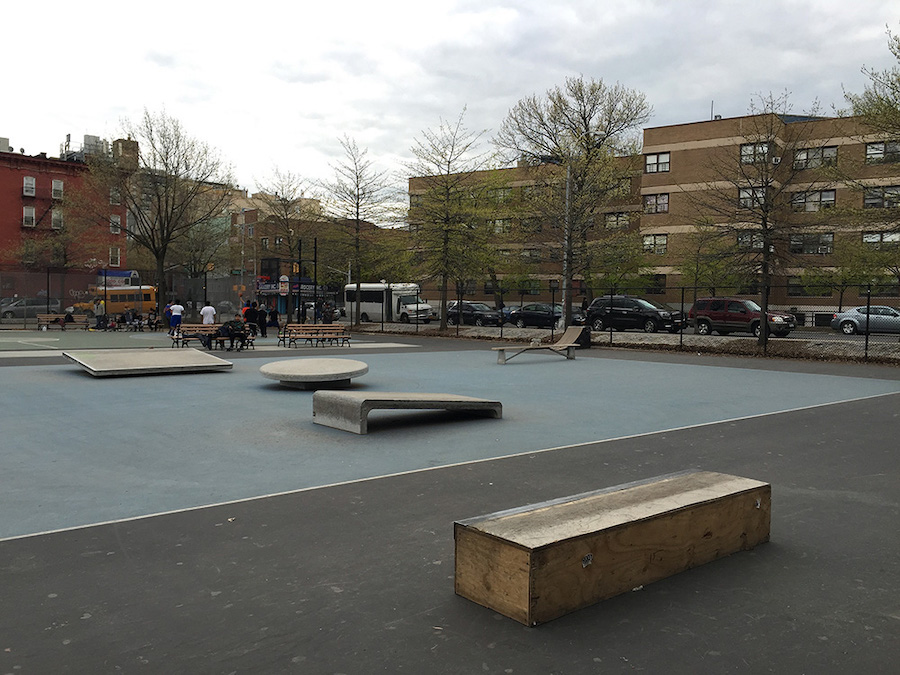 How you can help restore Blue Park:

According to Craig Willingham, who has started advocating, for the city to fund replacements for the obstacles that were removed. Here’s how you can help to restore Blue Park to “the version we know and love.”

– Follow the District 34 council member Jennifer Gutiérrez on social media. Participatory budgeting funds go to the projects with the most votes and the start of voting will be announced via her social media accounts.

– Reach out to councilmember Gutiérrez’s office directly and express your desire to see the park restored and perhaps even request a meeting.

– Contact the council member who is the chair of the parks committee, Shekar Krishnan, request a meeting, or at least send an email expressing your desire to see Blue Park restored and ask his help in making that happen.

– Do all the same actions already mentioned but focus them on the new Brooklyn Borough President, Antonio Reynoso.

Words by: Matt L. Roar
Matt L. Roar is a psychotherapist and writer living in New York City. His book, My War, is forthcoming in 2022.
Illustration by: Charlotte Tegen
Photos by: Eva Cruz & Mariah Davenport
Share this with a substitute teacher on Facebook
Report this as child endangerment on Instagram and Twitter