WE WENT TO THE SKATEBOARDING HALL OF FAME (YES, IT’S REAL) 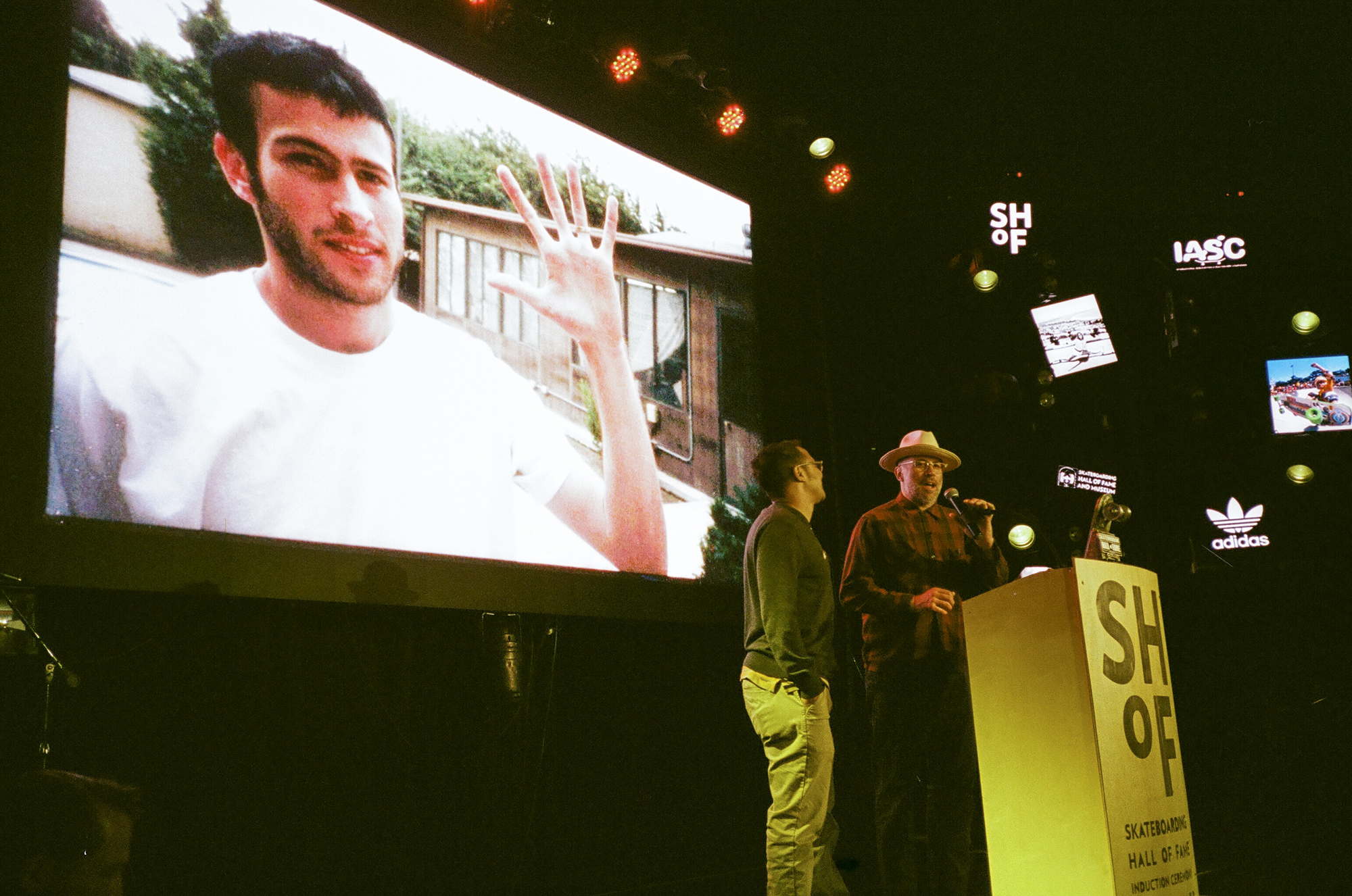 I doubt you’ve ever heard of the Skateboard Hall of Fame. Hell, I’d never heard of it until last year, and I work in skateboarding. I imagined a small fringe group of bitter men, holding onto crusty glory, packed into a tiny room in Beach Town™, California, unaccessible to anyone unless you kickturned in ’76.

So I was kind of stunned when I rolled up to a theatre in Downtown LA, full of 500+ men and women that I’d really only seen referenced in books or movies, Animal Chin style.

As someone who grew up idolizing the skaters of the ’90s and ’00s, I never gave a shit about any previous generations, but to see such a sizable group of skaters who created stuff we all take for granted (like urethane formulas and the UNIT tool) reminded me of the scope and lineage of what we’ve come from.

I silently lurked around and took some (blurry) photos with my camera, and watched some of my favorite skaters like Jim Greco, Rune Glifberg and Ed Templeton pay homage to the older generation, like a giddy high school reunion (where almost nobody actually graduated).

Just goes to show: old people may be old, but once, a long, long time ago, they were less old. 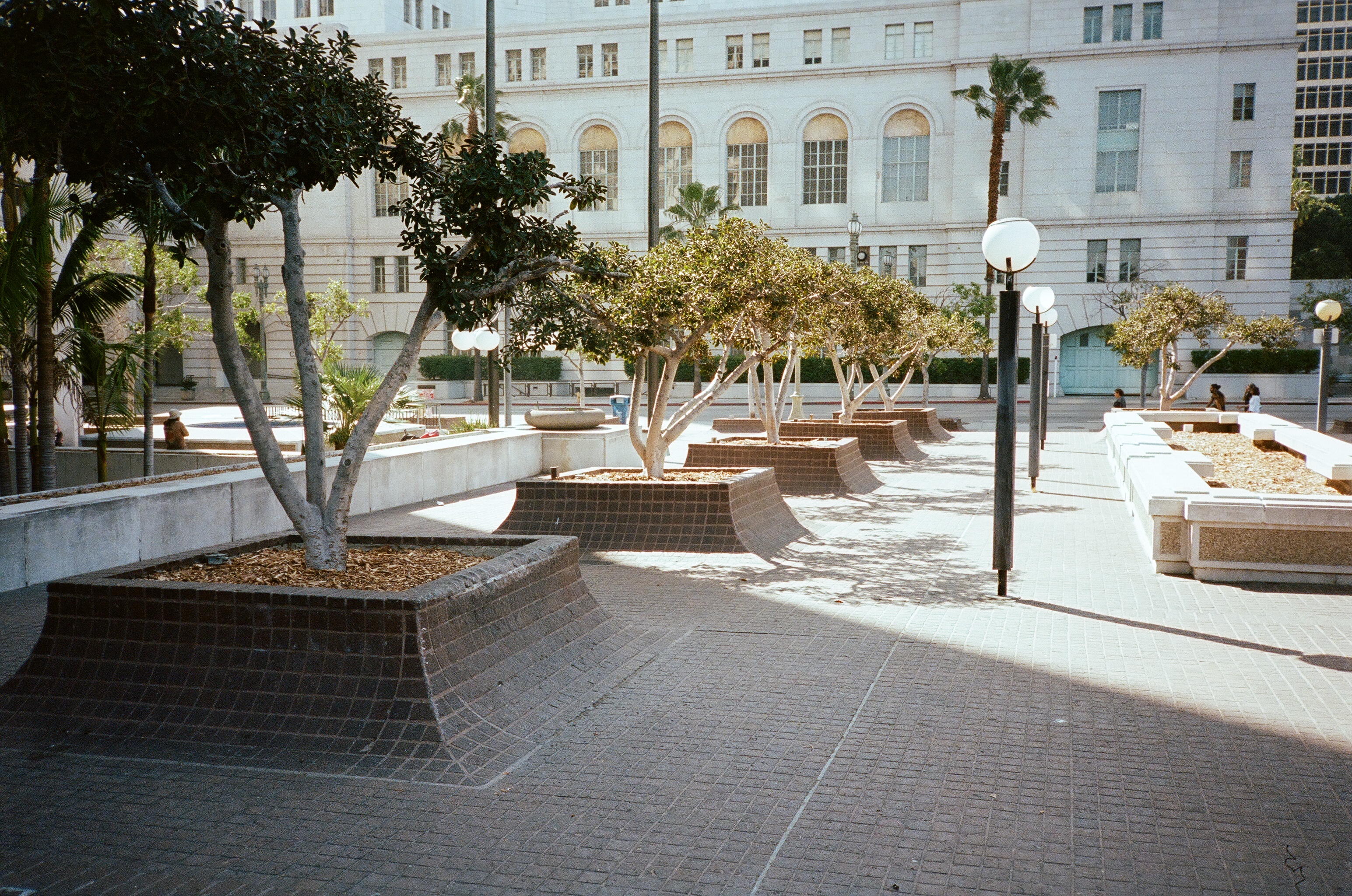 Before pulling up to the event, I made sure to do some Skate Tourism and check out these banks that are a DTLA staple. I had a mental list of all the tricks I’d rifle off, but once I got there I was quickly deflated by the spot’s difficulty.

Like most things you see in skate videos, they are way harder IRL and some may even be fake.

Ran into some peeps and Erica, who is hasn’t been with Active for over a decade but to me will always be… Active Erica. She apparently “hates” the name but says it in the way that someone you were flirting with in middle school would say they “hate” you. 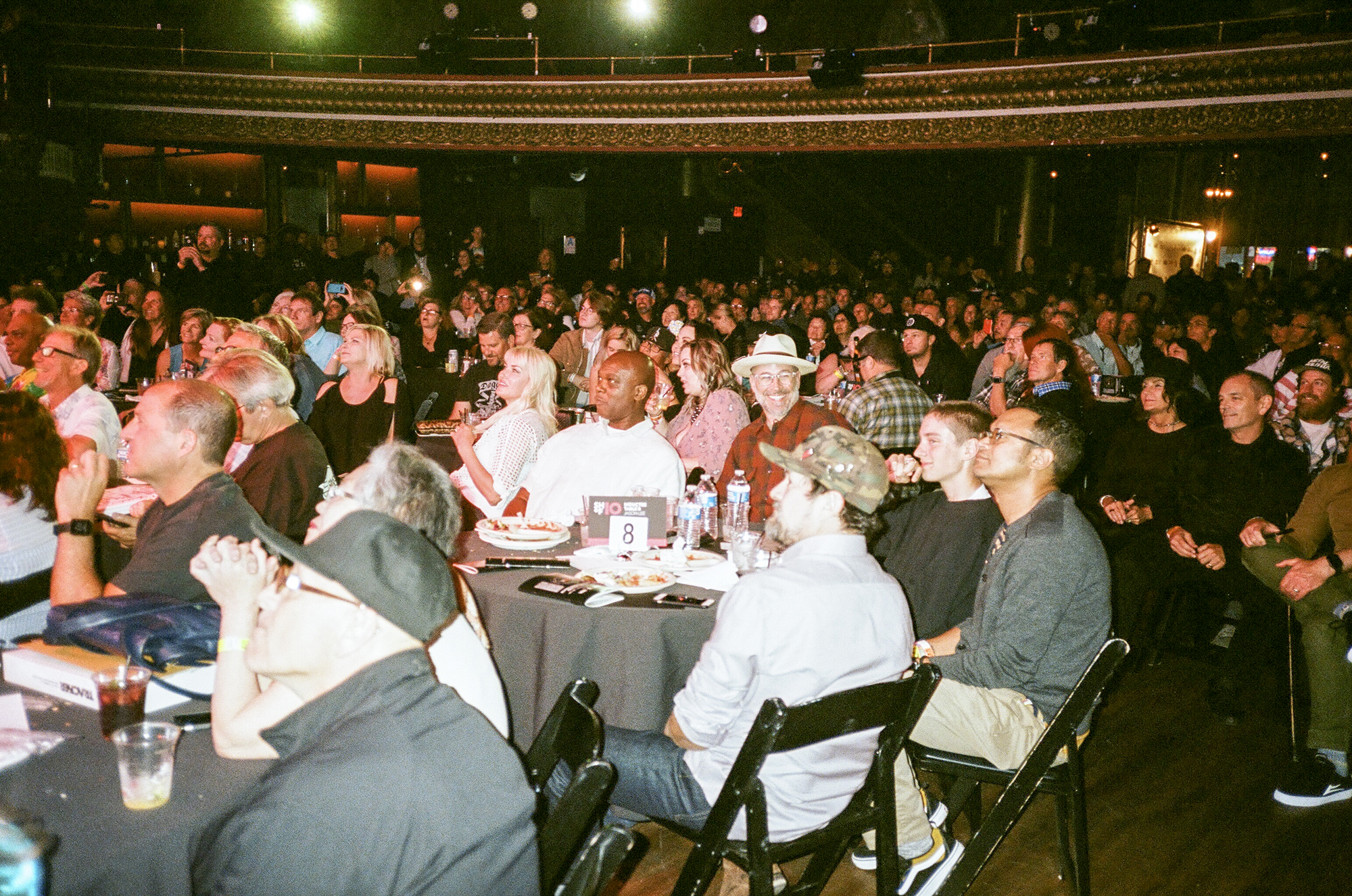 Skateboarding as an activity is young enough where you can still meet the first skateboarders who had their hands in making it what it is today. They’re (mostly) all still alive, unlike pioneers in sports like baseball or arts like painting. You can never meet Mickey Mantle or Vincent van Gogh, even if you try really hard and take a lot of acid. 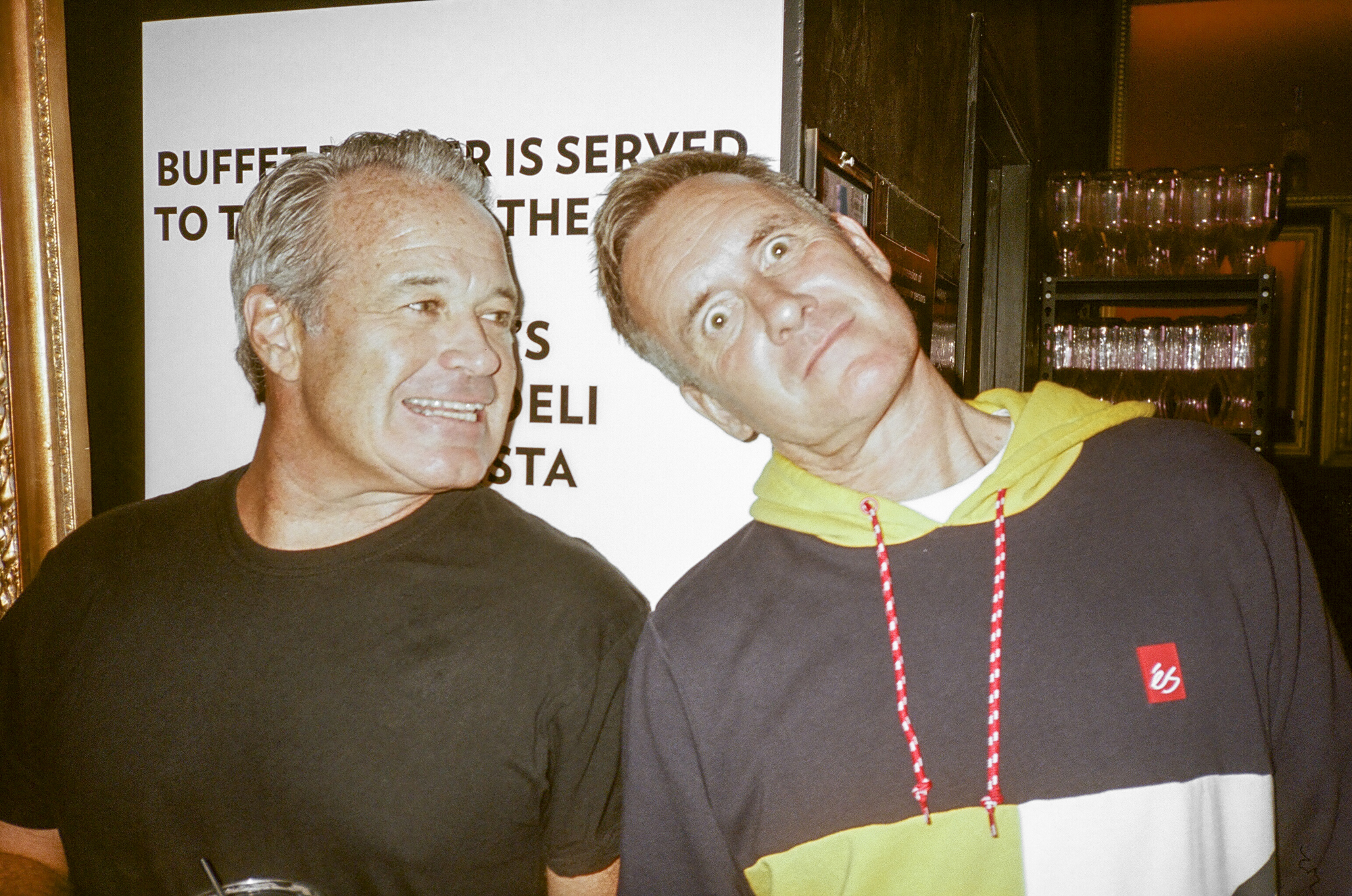 Patrick Conlon [at left] opened Epstein’s Bar in NYC, which has hosted countless skate events and drunken hookups over the years. To the right is Don Brown, ex-pro freestyler and inventor of Go Skateboarding Day.

According to Don, freestyle shorts are gonna be the next big thing again, so now’s a good time to practice taping your junk to the inside of your leg so it doesn’t pop out. 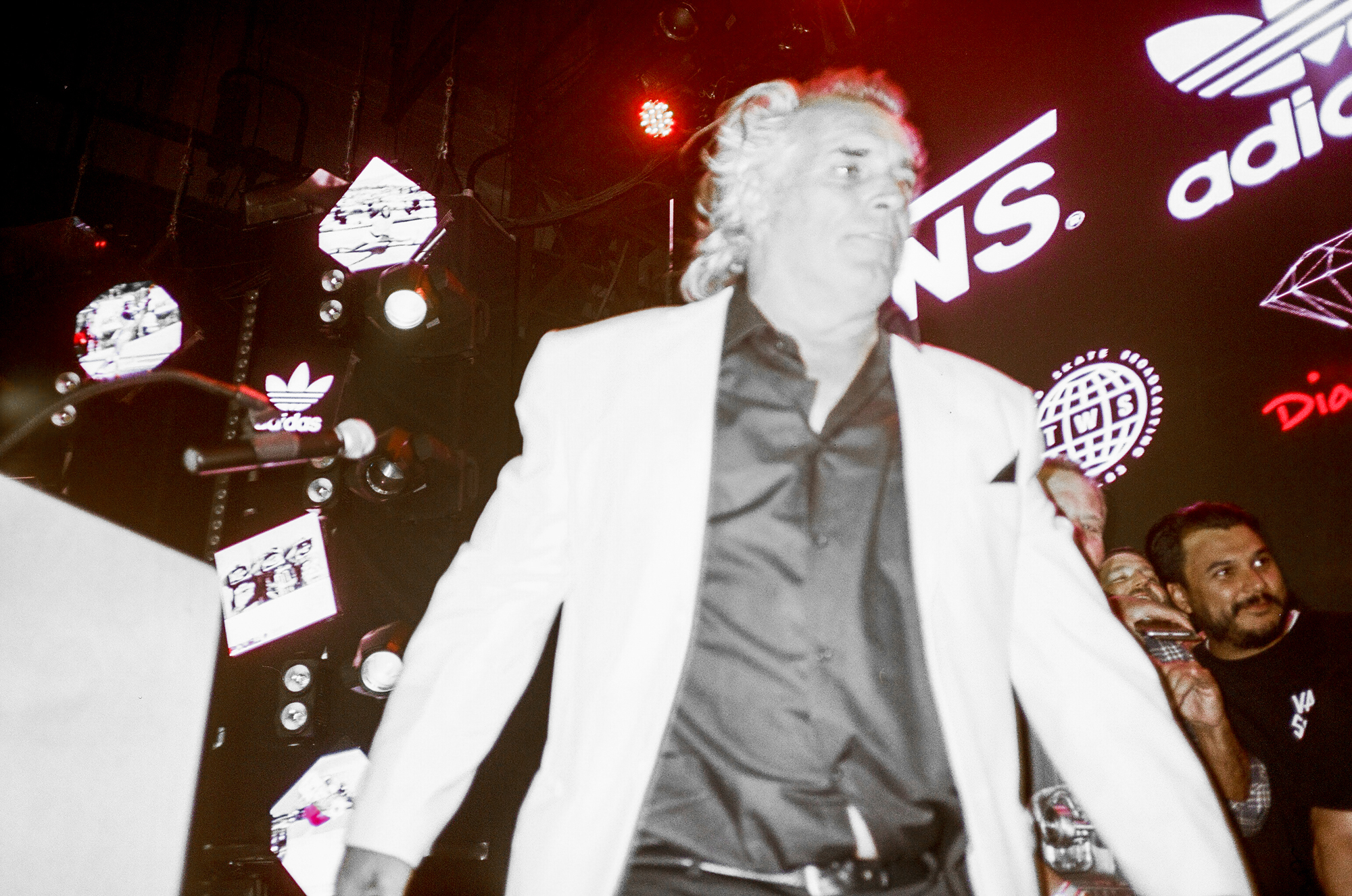 Scenario A: I couldn’t figure out how to use this film camera I bought last minute so that’s why the photos look like shit.

Scenario B: I caught a pic of Steve Olson’s ghost.

We tried to film a lil’ segment where we’d show some of these people corny 2019 Instagram footage and watch them react, but everyone was so pumped to be there nobody would say anything remarkable. Thank god we had Glenn E Friedman and Bobby Puleo to actually have a point of view. 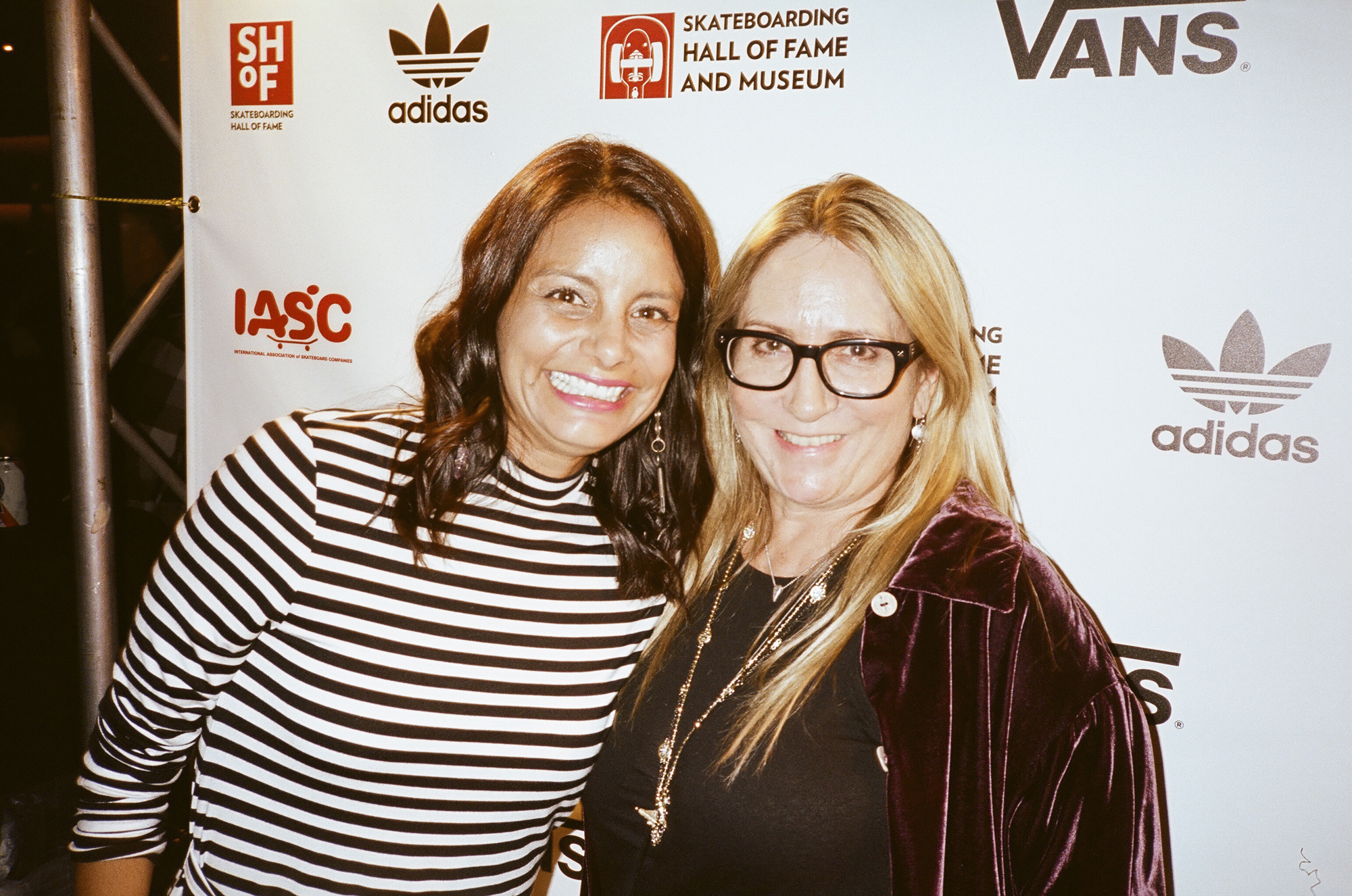 Laura Thornhill Caswell [at right] is a skater from the ’70s who went on to become the first female skater to get her own signature model skateboard (although board graphics at that time were unfortunately boring as hell).

Laura is also credited with discovering a nine-year-old Eric Dressen while skating a pool in Torrance and helping him get his first board sponsor, but that could just be one of those urban legends like Dental Floss or The Round Earth Theory. 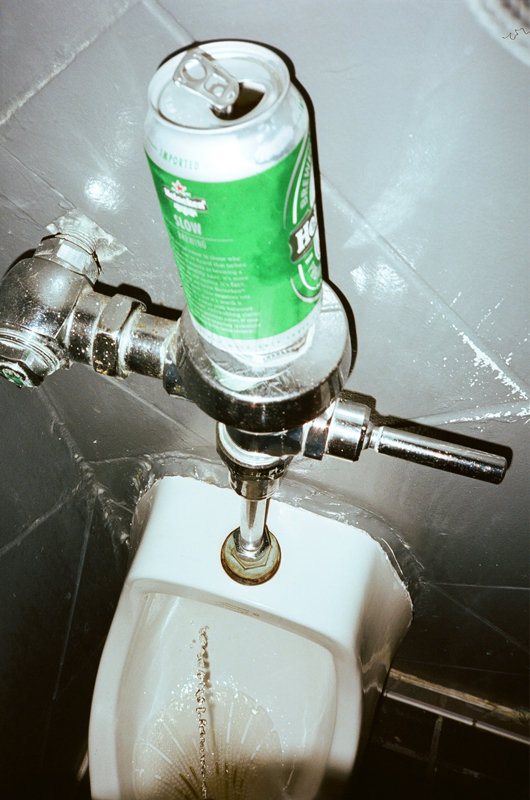 Now it’s time for a Party Pee Break™. You know, just like in real life! Feel free to take a break — stare blankly at your phone, unkink your neck, and let that fart out you’ve been holding for way too long.

Bonus: if you zoom in really closely you can see 1 mm of my penis. 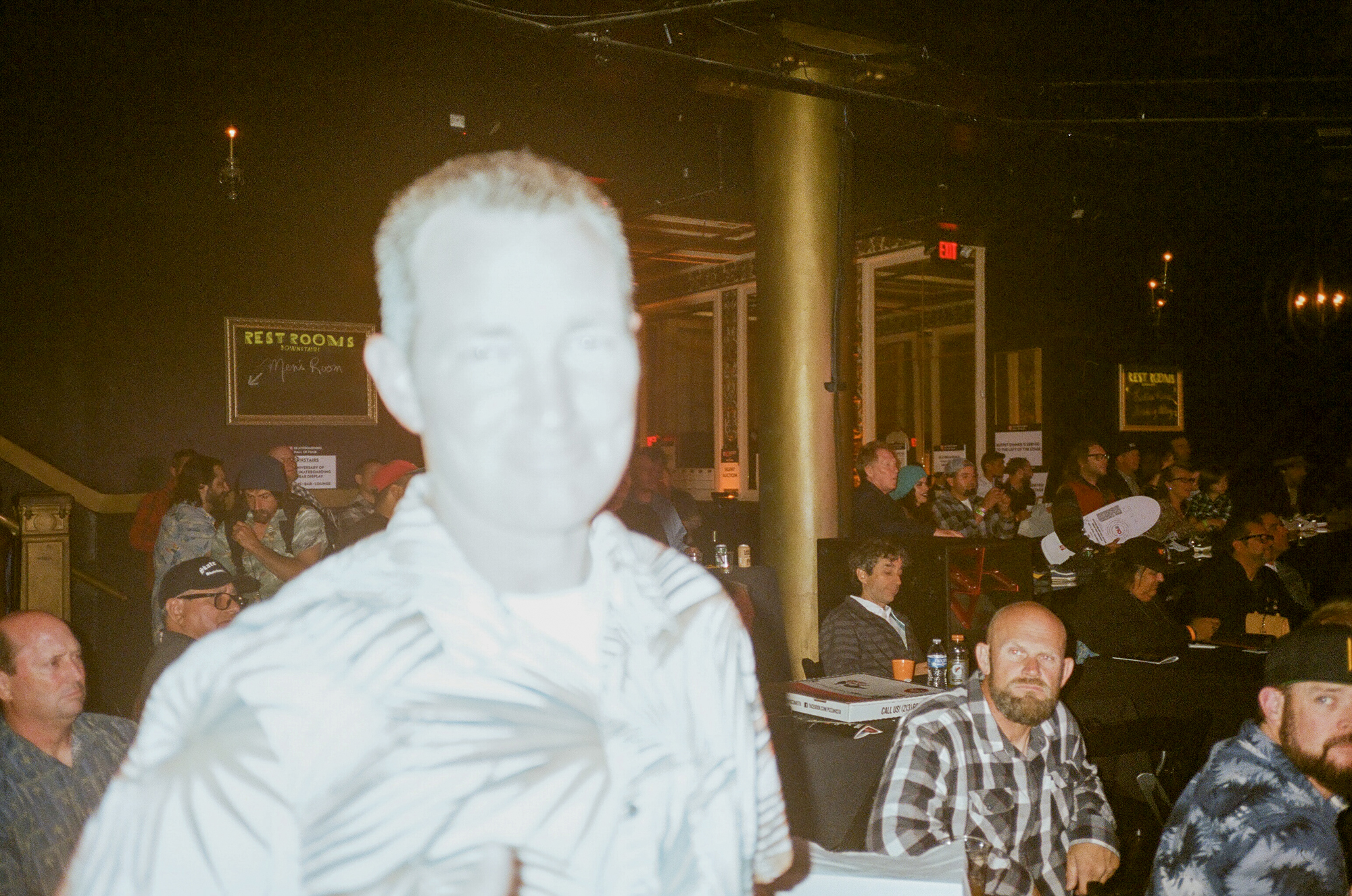 Although Jeremy Wray is alive and well, his ghost pops up from time to time to brag about what would have happened if Jeremy ever fell trying the water tower ollie. 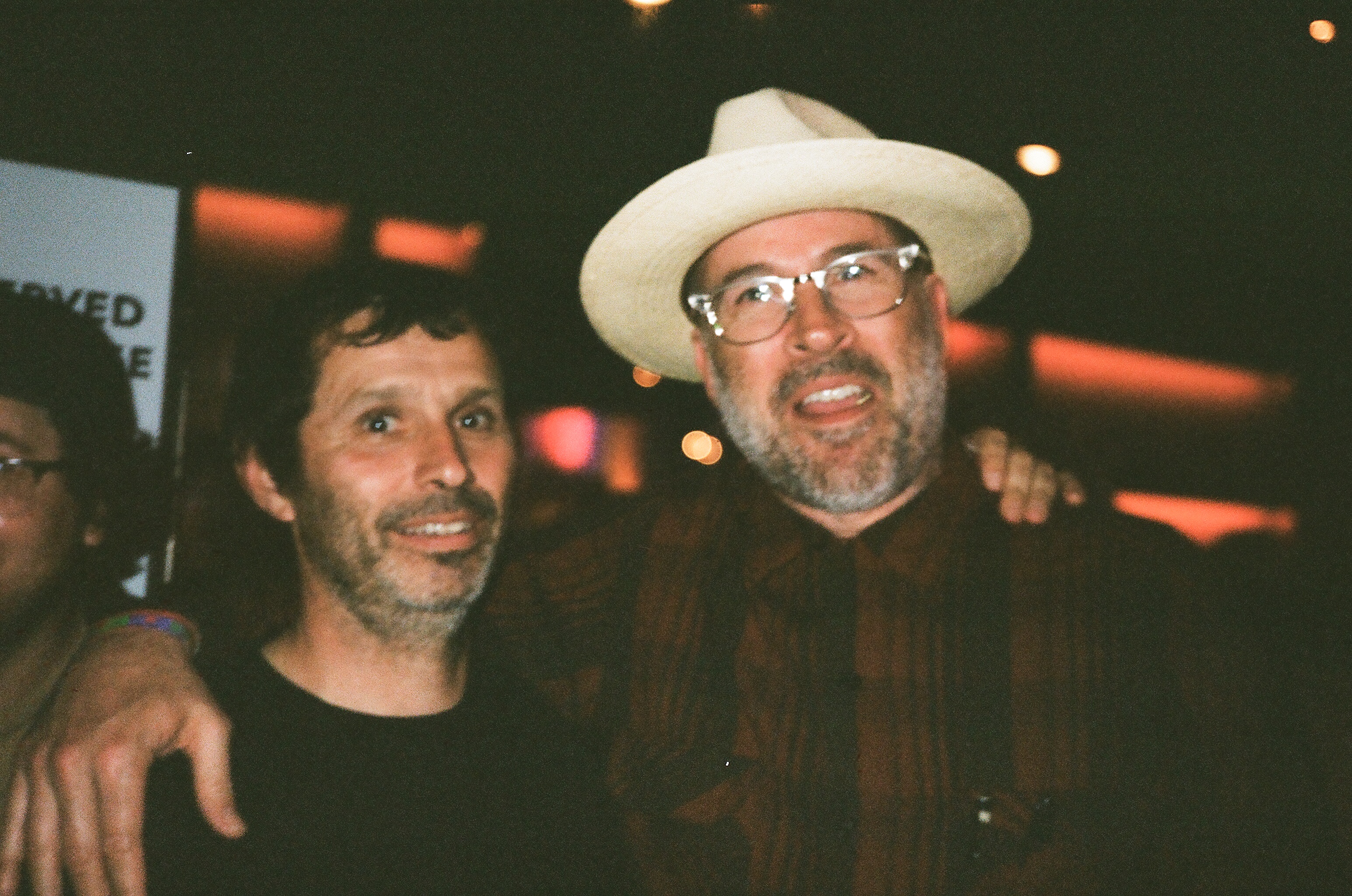 Jason Lee was inducted into the Hall of Fame this year, which is a good indicator of how many more epic skateboarders they have to go through. Honestly, I was surprised Jason was still around after that tragic car accident in the ’90s.

Pattie Hoffman [at left] and Ellen Berryman, are both Hall of Famers, and I’d heard that Ellen once skated on stage at a Jethro Tull in the ’70s. If Lil’ Wayne still has people skate on stage at his concerts, he should get this lady. 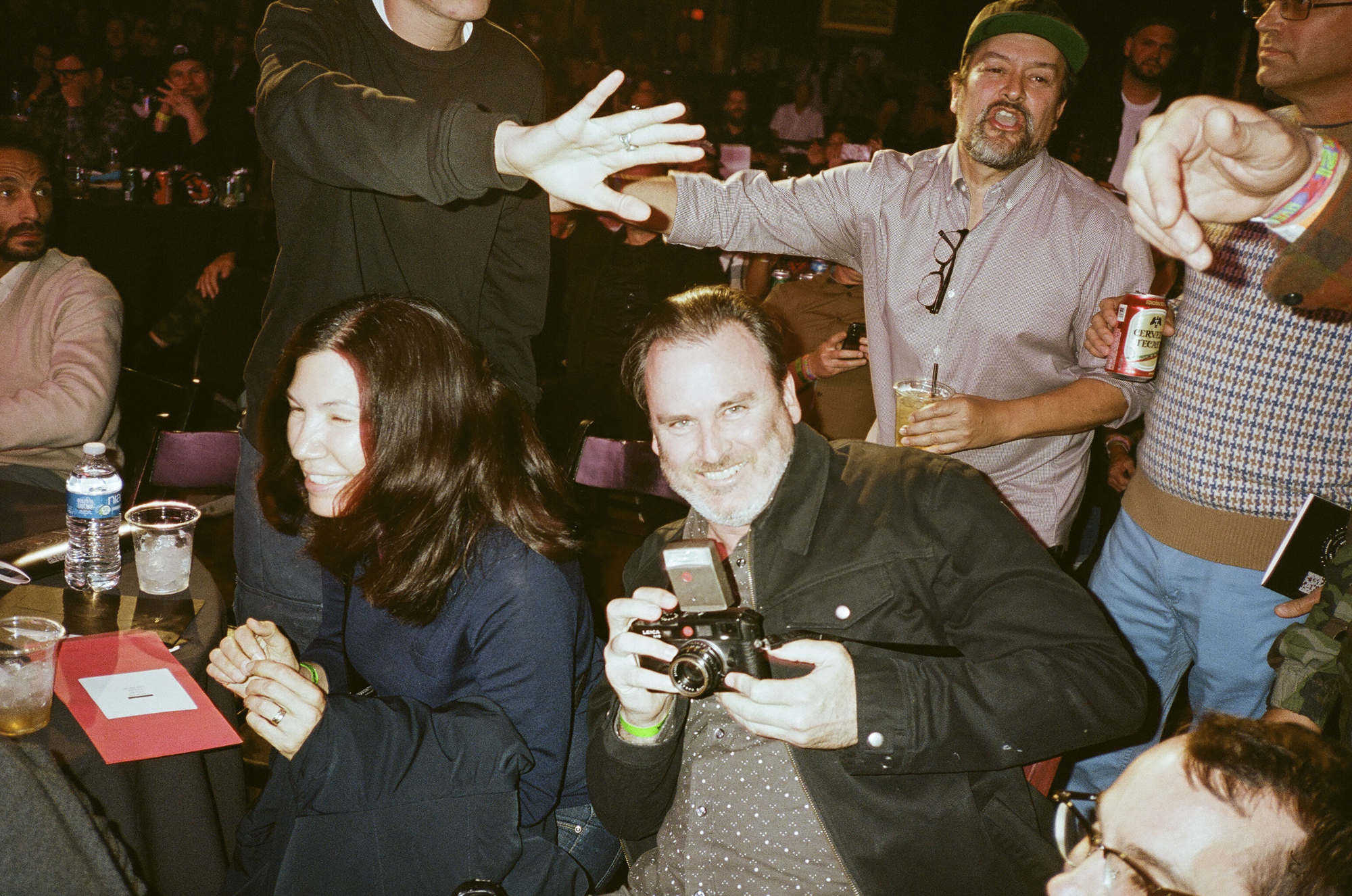 Ed and Deanna Templeton are probably skateboarding’s most famous couple, even more so than the former pro skater power couple of Bob Burnquist and Jen O’Brien.

In person, Ed is oddly intimidating because he doesn’t have an outspoken personality. He’s so quiet, you feel like you have to think of something really worthwhile to say if you’re gonna bother him. I yelled, “Ed, look! A penis!” Totally fell for it.

Afterward we went to wind down at this spot Clifton’s Republic, which feels like a five-story funhouse for adults. There’s secret bars behind mirrors, live jazz music, and plenty of corners to indulge in any sort of sketchy substances. Plus, no ball pits for kids to leave dumps in.