THE SCIENCE BEHIND OVERCOMING FEAR IN SKATING 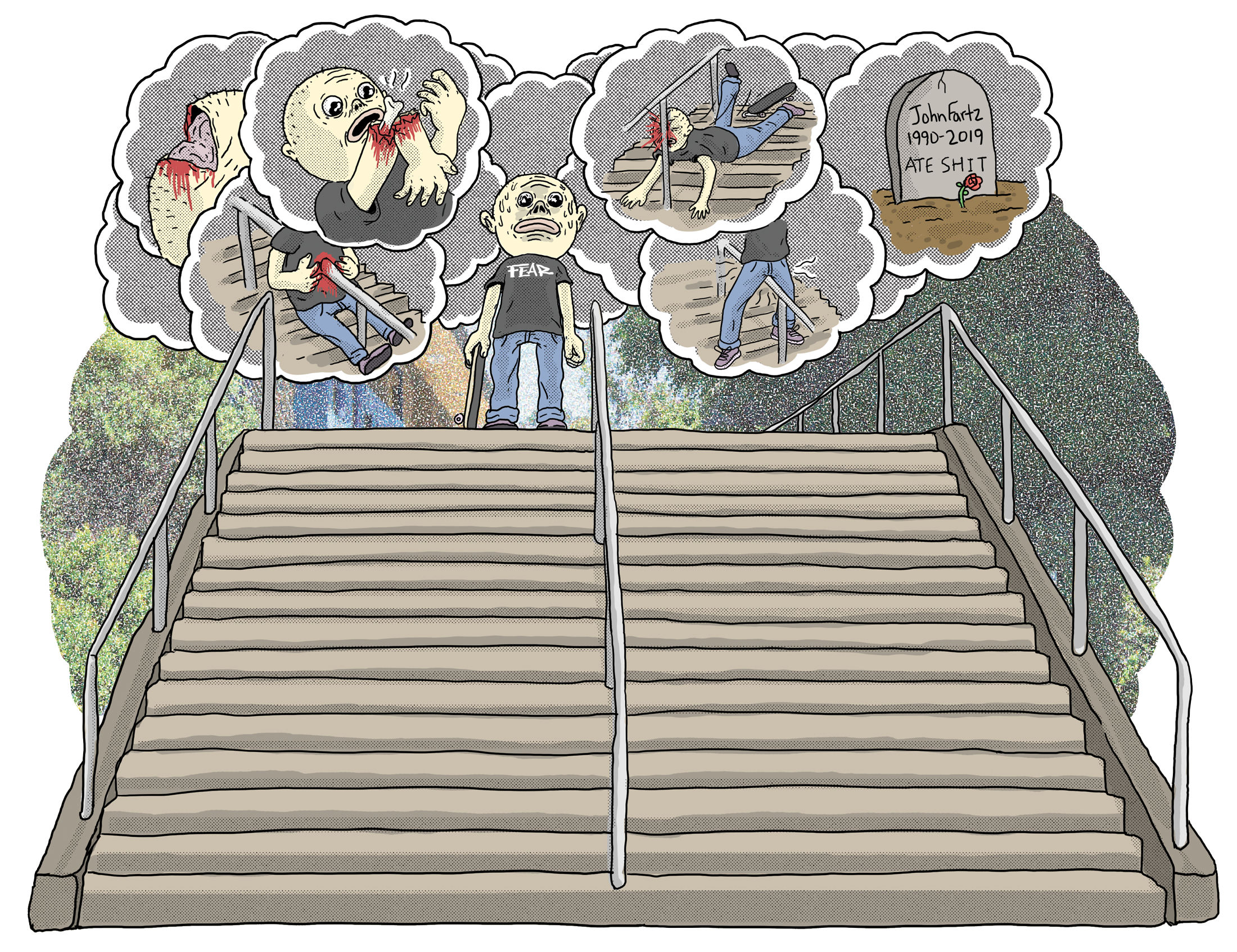 The idea that skateboarding is “80% mental” is both useful and completely pointless. That specific ratio of 20% braun to 80% brain was most likely pulled from someone’s butt, but it still feels believable because a big part of learning to skate and progressing is dealing with internal fear.

Fear can help protect us from accidentally killing ourselves, but it also holds us back from doing cool stuff. So to better understand how to manage fear, we talked with some doctors and sports psychologists who study it.

We were hoping to uncover state of the art techniques for overcoming fear, but surprisingly or not, what we learned was pretty familiar. Go figure.

If you’ve ever wondered why some skateboarders seem totally fearless, while you can never seem to jump down anything bigger than a three-stair, the answer isn’t entirely based on luck and genetics.

Dr. Jason Prenoveau, an Associate Professor of Psychology at Loyola University Maryland, researches mood and anxiety disorders, and he told us that your sensitivity to fear can be influenced by your surroundings.

“For example, even if I am more genetically predisposed to fear and anxiety, maybe I see my sibling or friends doing hard tricks all the time growing up. And I never see them get hurt and often see them having fun. Then, when I try, I also don’t get hurt. Based on my learning, I am less likely to be fearful of doing tricks.”

Unfortunately, Prenoveau said the opposite can also be true. “If I see lots of others get hurt early on and/or get hurt myself early on, then I am more likely to be anxious/fearful of doing tricks.”

So if you wish you could commit to kinked handrails, don’t blame yourself. Blame the kids you grew up skating with for not being better psychological influences. 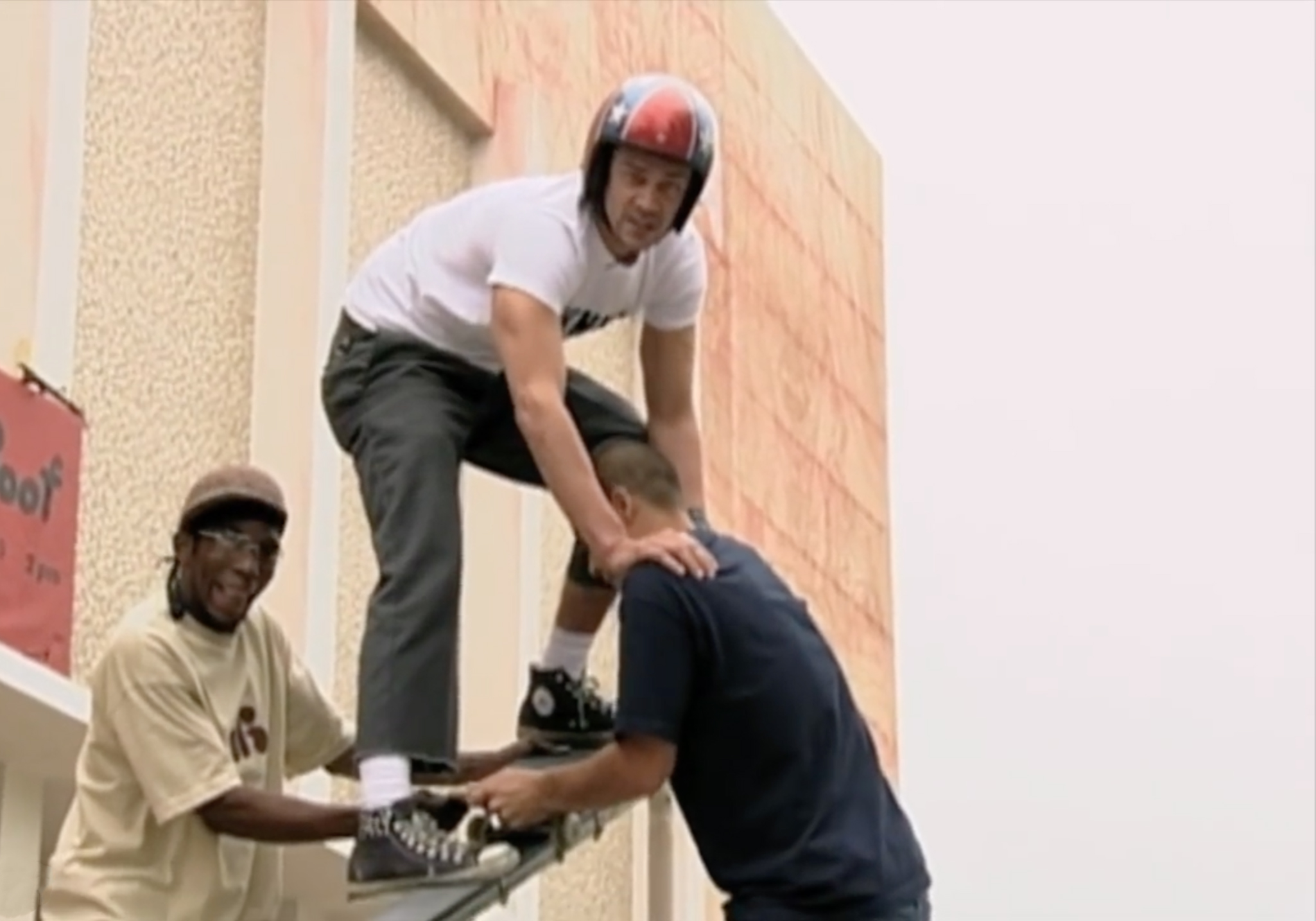 johnny knoxville letting fear get the best of him

However, other research suggests that fearful memories can be reshaped. Meaning you might be able to reprogram yourself so that traumatic slam from your past will not longer prevent you from skating big shit.

In a 2016 article from the science magazine Nautilus, Dr. Marie Monfils of the Monfils Fear Memory Lab described how fearful memories can be broken down over time: “Research has shown that every time we recall a memory, it undergoes reconsolidation, meaning we are able to add new information or a different interpretation to our remembrance, even turning fearful memories into fearless ones.”

at some point you gotta just go for it

That article discussed how Alex Honnold, the rock climber famous for climbing a 3,000 ft rock face without any ropes or safety gear, used a process of reconsolidation to overcome fearful memories and thoughts.

Honnold revisited those memories by writing notes of his climbs for years, mostly reminding himself of what he’d accomplished and how those achievements felt. Before a climb, he would also visualize the moves and routes he’d take, and sometimes picture himself falling and bleeding out on the ground.

Ultimately, writing about and visualizing his climbs, including actively imagining how fateful mistakes could play out, helped reduce his instinctive fear response to the point where he was comfortable climbing thousands of feet up and basically facing death.

This change is measurable, too. Compared to another rock climber, Honnold’s amygdala, the part of the brain responsible for detecting fear, is almost impossible to activate. Neat, but also, yikes. 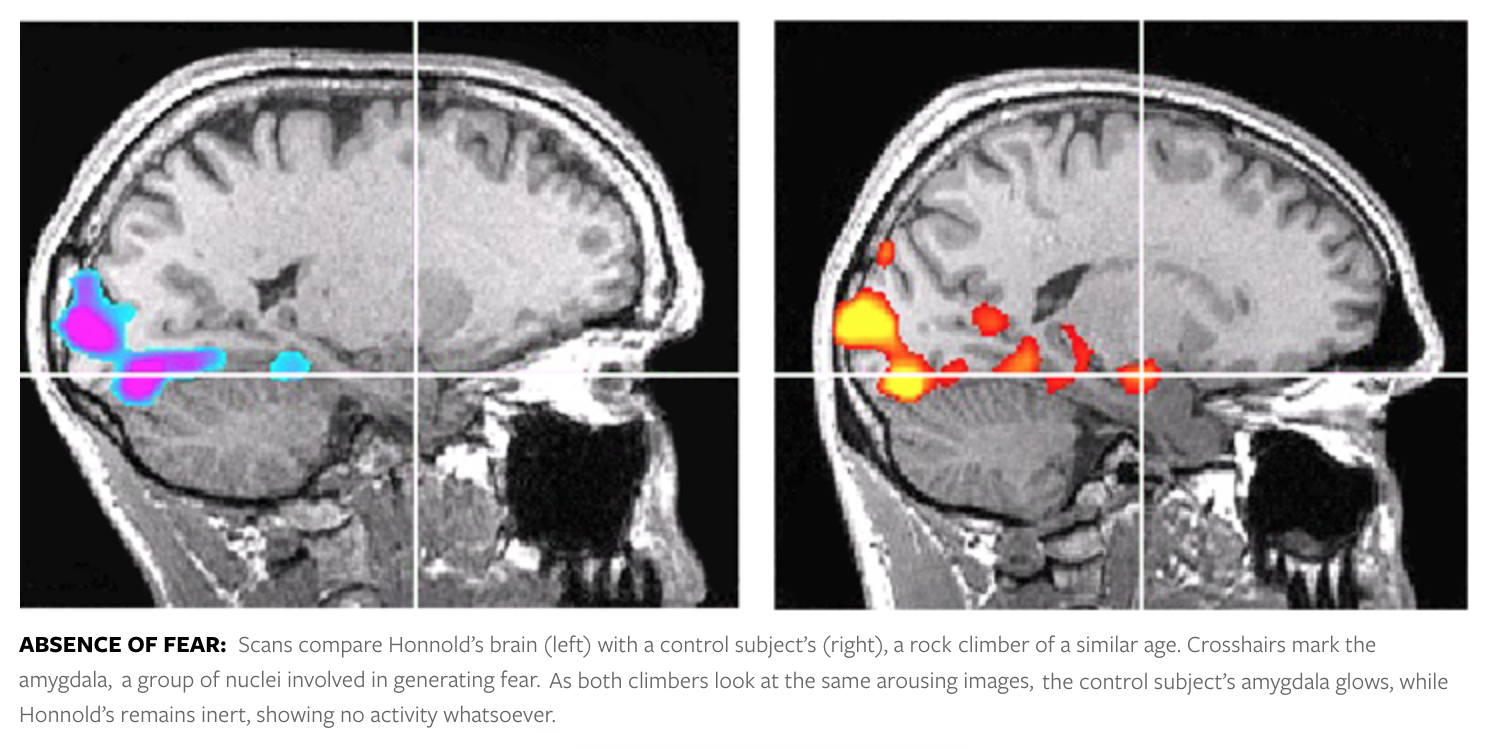 To see what kind of techniques might work for skateboarders, we talked with a performance psychologist, Dave Collins. Collins hasn’t worked with skateboarders, but he’s worked with Olympic snowboarders and other pro athletes around the world, and his experience is pretty transferrable.

The first couple techniques Collins mentioned are things that skateboarders already do, like working up from easy to progressively more difficult tricks, or getting positive affirmations from friends. Collins also agreed that taking a slam could be a good way to get over your nerves. “You might call it the Dr. Pepper argument. Like, what’s the worst that can happen?” he said, referring to a slogan Dr. Pepper uses in the UK.

We asked him about skateboarders like Dustin Dollin who use beer and marijuana to supposedly help them skate big spots, which Collins doesn’t see as completely irrational.

As long you can consistently do a trick on flat, drinking a little beer or smoking a little weed could relieve physical tension that might otherwise mess you up when you take that trick to something bigger. “Very often you get tension in the wrong place…[so] taking a bit of tension away and doing it in a looser fashion will help. It’s like going to a party and being social. I might do it easier with a drink inside me,” Collins said.

While these reassurances were interesting to hear, the most helpful thing Collins discussed was the real value of visualization. To demonstrate, we came up with a hypothetical situation where a skateboarder breaks their ankle skating a gap and wants to go back to get the trick, then asked Collins to explain how he’d advise them to overcome their fear to eventually retry that trick.

The process basically consists of visualizing your body doing more than it actually can. “I would have my athlete imagining two steps ahead. So two steps of where they are physically, they are doing it in their head,” he said. For a skater just starting physical rehab, with crutches and a cast, they would imagine themselves not only walking without the cast and crutches, but maybe balancing on the injured foot or even jogging.

Alongside this, they would be physically applying the “two step ahead” method.

“What are the physical requirements for that trick, for jumping down and taking that shock? Well, I have to be able to cushion the landing from this height. So if for example, the exercise that matches the challenge is two-footed hops over hurdles, I would tell them to do two footed-hops over hurdles with a weighted jacket,” Collins said. Later they would move on to one-footed hops with a weighted jacket, then maybe increase the size of the hurdles or even wear the weighted jacket while skating.

Finally, Collins would have the skater watch footage of themselves doing whatever trick they want to do down the gap, and concentrate on the feeling of landing it.

Yeah, these intense visualization techniques feel a little extra, but they’re not that different from a skateboarder who drives to a spot before skating it, just to check it out. By looking at the spot and walking on it, you have a much clearer model in your head that you can imagine yourself skating down, and you can do that mental exercise for days or weeks before you really feel confident.

When you actually go to skate it, a lot of the work has been done. You just have to show up and throw down.

Kinda makes us feel better about people who can show up and land something down a big gap first try, because in their head that might have actually been their 10,000th try.

To see if any of Collins’ advice held up, we talked to Jaws, who skates more terrifyingly huge gaps than almost anyone else. It turned out he was already intuitively applying some of these techniques.

If he’s going to skate a big gap, Jaws said he’ll try it as soon as he gets to the spot. He also does a kind of motivational handshake where he interlocks his fingers with someone else’s. “I call it The Connection. Like if [the filmer] Buster [O’Shea] and I are going out, we’ll connect our hands like that and get the spark going. The passing of energy brings the positive vibes, then I’m ready to jump.”

Sure, seems a little New Age-y, but it also seems to work.

So if you want to become a hometown hero for landing hammers, rather than hucking blindly, the three points to remember for overcoming fear are: methodical visualization, positive affirmation, and escalating physical and mental conditioning.

Or you could ignore all of that and just skate for fun. Either way, probably don’t watch this horrible gif before you go skating.