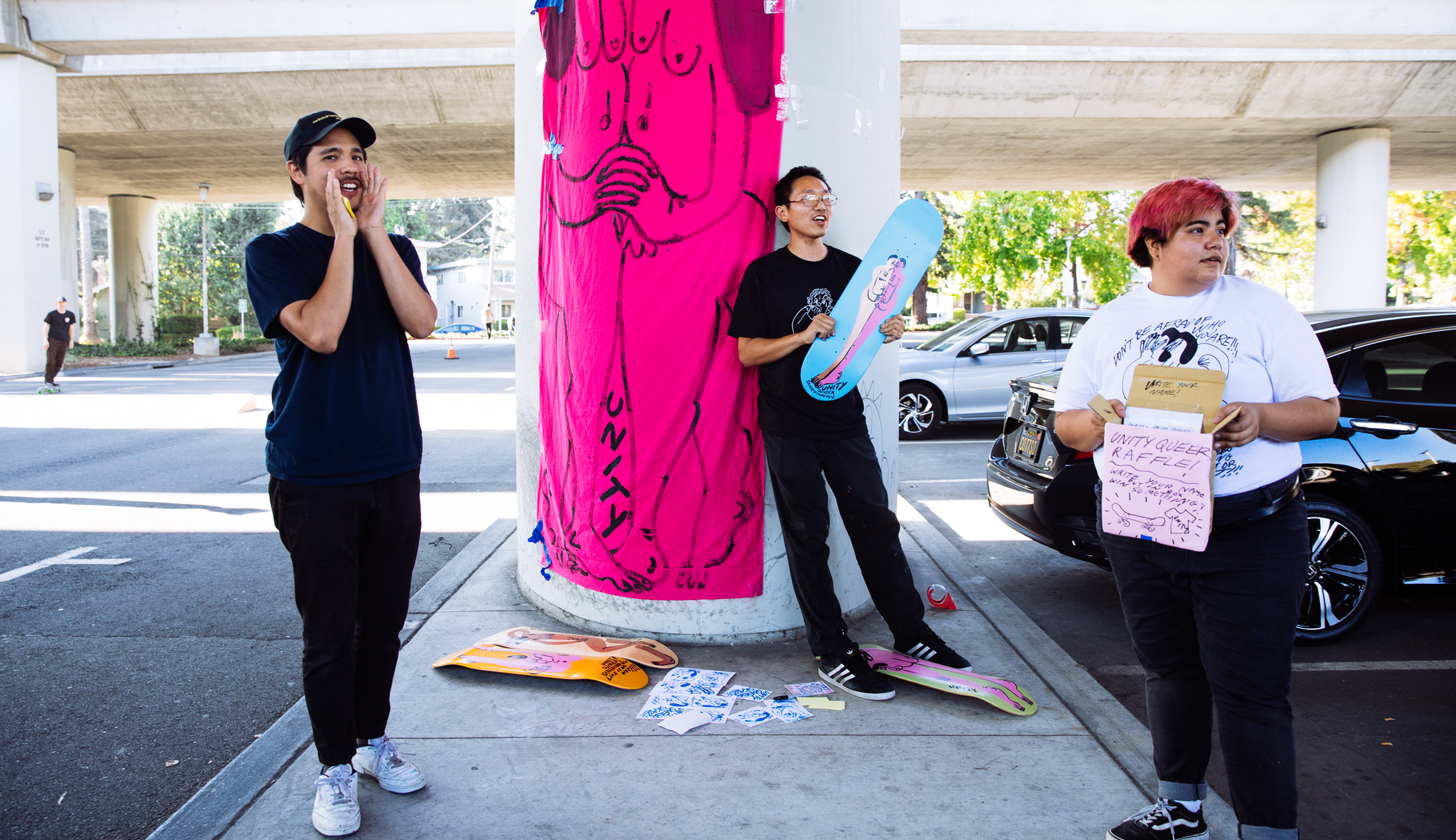 As the avenues to share skateboarding have increased – through social media, magazines, and increasing mainstream recognition – the sound of skate culture has risen from a song to a din.

Now that skating has more of a voice than ever, it begs the question: Skateboarders are making a lot of noise, but are they saying much?

I’ve worked as a photographer in skateboarding for nearly 10 years and have been out of the closet for maybe five of them. Never has my gay life intersected with my skateboarding life. If anything, maybe I’d worked to pull them apart – until this weekend.

Right next to the MacArthur Bart Station in Oakland lies the Unity Mart, a 10’x15’ office where Jeffery Cheung and his partner, Gabriel, help people make zines. When I visited there was an electric energy in the room.

The next day was the first of two of Unity’s famous “Queer Skate Days,” aimed to create a safe space for the queer community to get together and skate.

One of many amazing things to me about Jeff is his desire to foster a community. He wants to inspire as much as he wants to be inspired. Which is why when I asked if he wouldn’t mind me interviewing him, he politely declined and asked if instead I could get quotes from some of the other Unity riders, since they’re just as much a part of Unity as he is.

So read on to meet some of the riders on Unity skateboards: 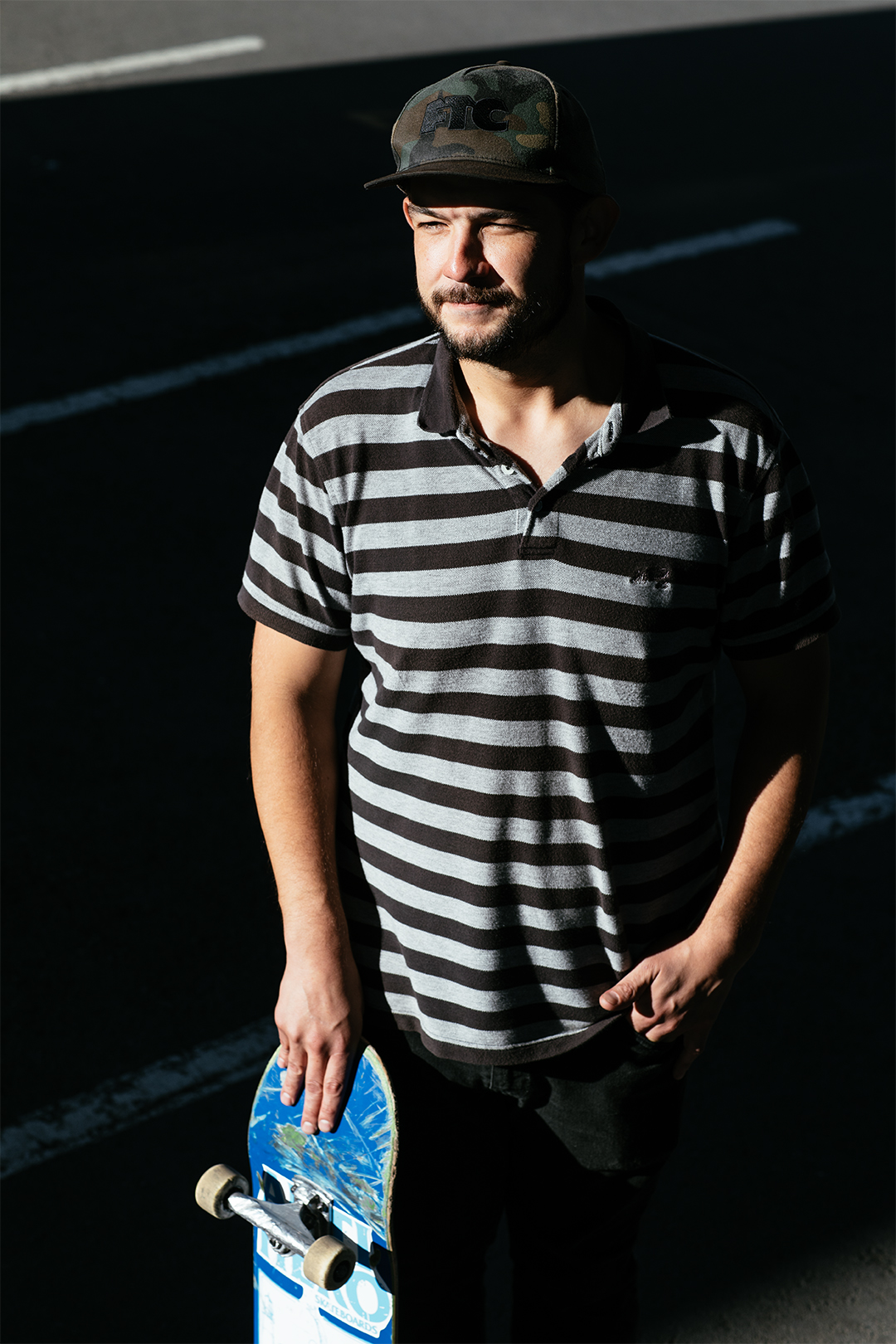 Since moving to SF, I’ve almost skated exclusively by myself. Most of this has to do with the fact that I didn’t really feel like I was going to meet other skaters who weren’t going to be homophobic. I would meet some gay dudes that skated or used to skate, but never someone who skated on a regular basis like I wanted to. So I just skated alone.

My first Queer Skate Day was Jeff and Cher’s birthday at Rockridge in June of this year (2017). Honestly, I was pretty nervous to go at first because I didn’t know anyone and always skated by myself, but it was the most fun I’ve had skating in years, and I also met tons of queer skaters. There were so many queer skateboarders from all different backgrounds, skating styles, and skillsets. People were teaching others how to do tricks, no one was vibing anyone or snaking, and everyone was welcomed with open arms.

I’ve been to all SF/Oakland Unity events since and the energy is always the same! There’s also nothing quite like skating with other people, and I didn’t realize how much I missed it until that day. 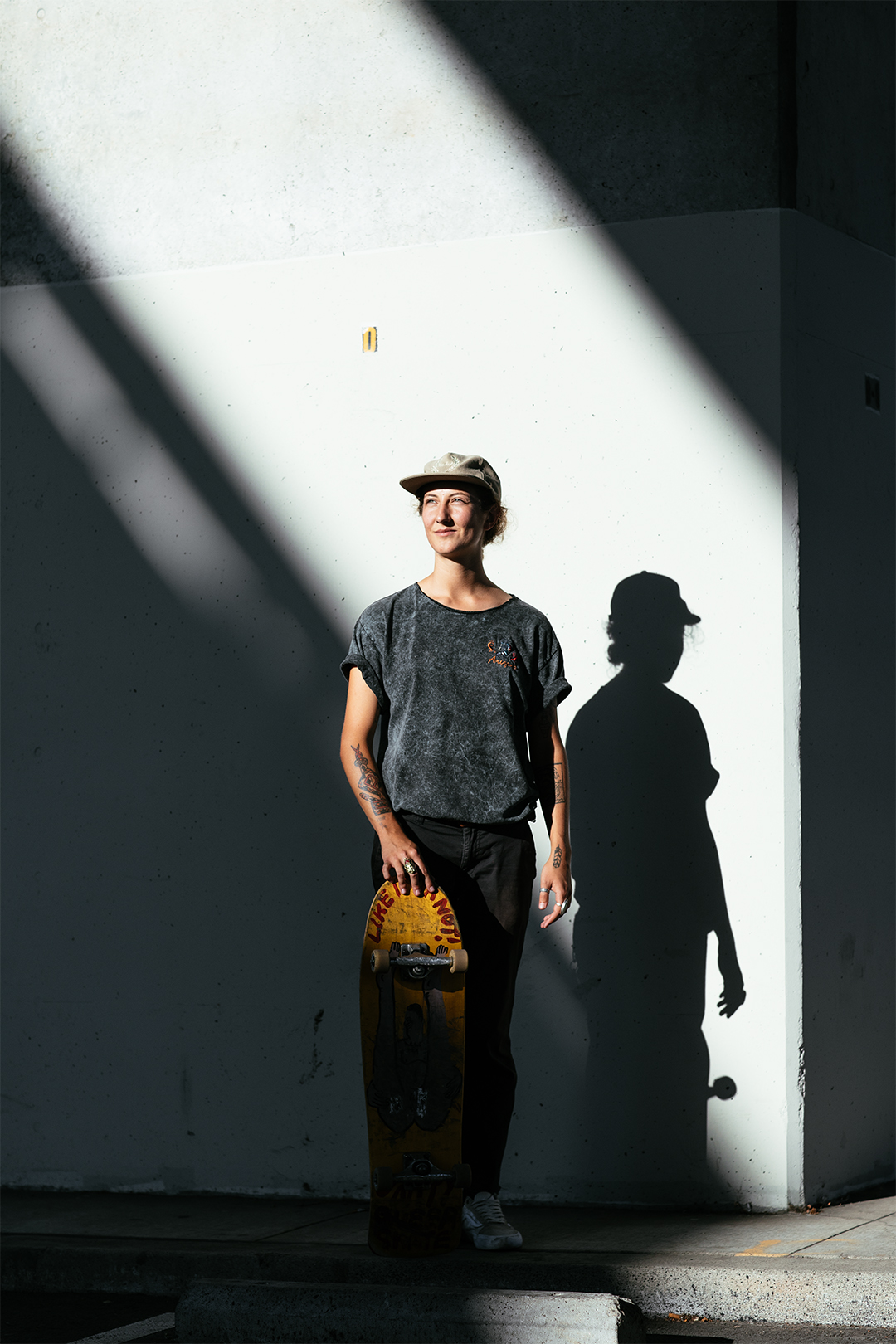 I think I first picked up skateboarding when I was around 10 or 11, inspired by the character Reggie Rocket from Rocket Power, who was really the first female I’d seen ride a skateboard. My parents don’t really understand skate culture so that was really my only exposure to it at the time, but that cartoon made it look so fun and rad and I was itching to skate.

I’d stumbled upon Jeff Cheung’s Unity Press and saw his first post on the Unity skateboarding page that he was looking for queer riders for his new queer skateboarding brand, and I was just like, “Woah, that’s cool! I’m queer, I skate and I love this artwork and these boards. I should make a video and send it to them.” So I did and that pretty much started my whole relationship with the Unity squad, which continues to grow all the time! 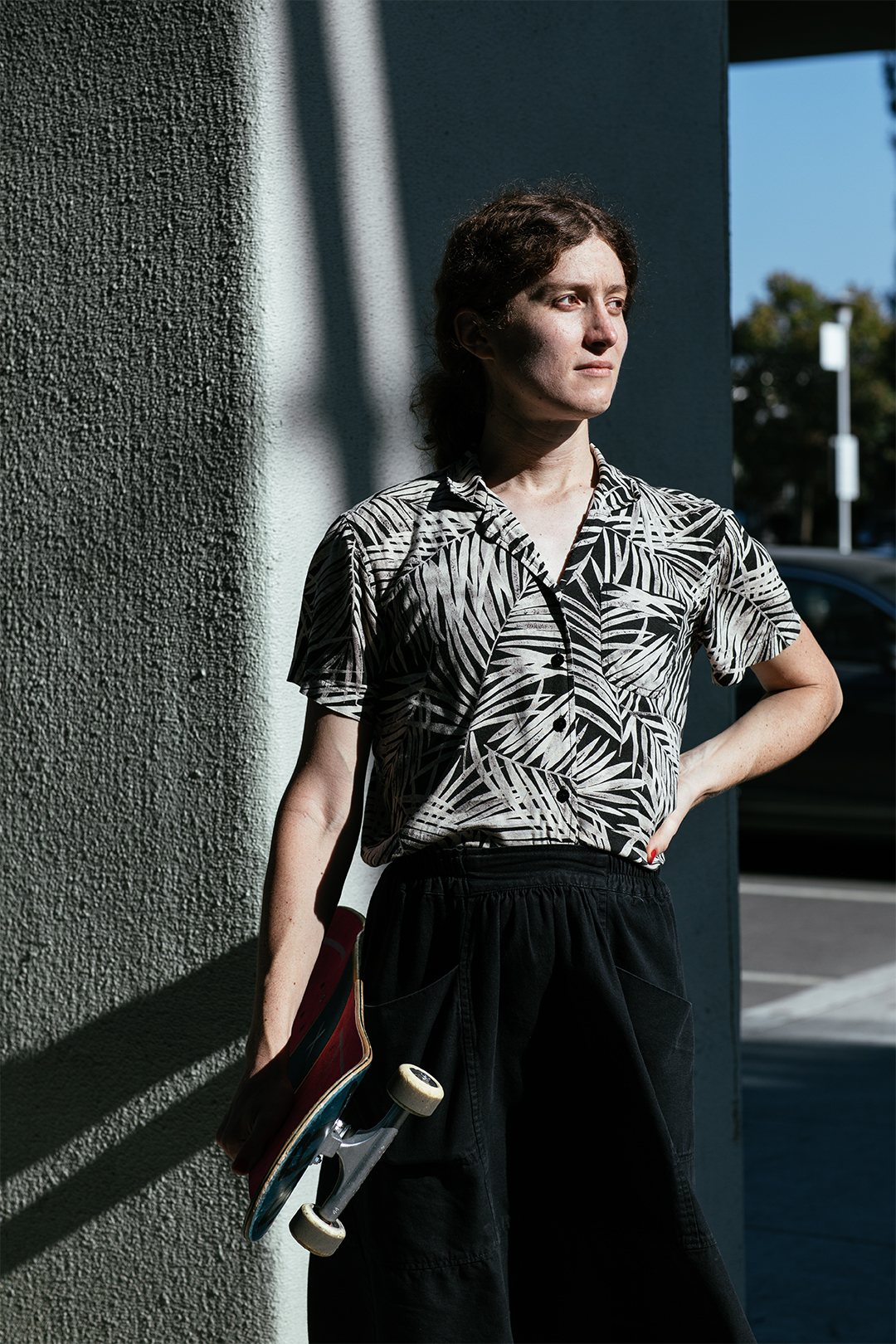 My first Queer Skate Day was a sort of unofficial one up in Oakland. There’s just something about how cis het men look at you at a park/spot that can really make a session into a huge bummer and, well, I was so completely *not* bummed that day as I usually am when I’m out skating. There were some cis het regulars giving me and the few other women/femmes in attendance the usual looks, but it was easy to drown that shit the fuck out thanks to being surrounded by a group of amazing queers just being stoked on each other and endlessly hyping each other up about little tricks, big tricks, and such.

It’s definitely gotten a lot better these past few years for women/femmes/queers in skateboarding, but we still have such a long way to go. The number of times I still hear ‘gay’ and ‘faggot’ used as slurs at skateparks (in LA no less) is just ridiculous. We need all you skaters of privilege, people in leadership positions in skateboarding, to make that shit stop.

It was only two years ago that Gary Rogers stopped using “faggot” in a Skateline episode, and it’s only been like a year since a Street League trick commentator, on national tv, called a ‘body varial’ not a ‘sex change’ (which is bad enough) but a fucking “b**** Jenner.” Caitlyn might be a joke of a human, but dead naming her is straight up violence!

We have people like Danny Way still influencing shit, and he’s implicated in his friend’s literal murder of a gay man. Quasi put out a hat last year that says “ladyboy” on it and introduced it on Instagram with the caption “haters will think it’s gay 💅” – Er, um, no, haters will think your hat and your whole company is appropriative and trans-phobic. 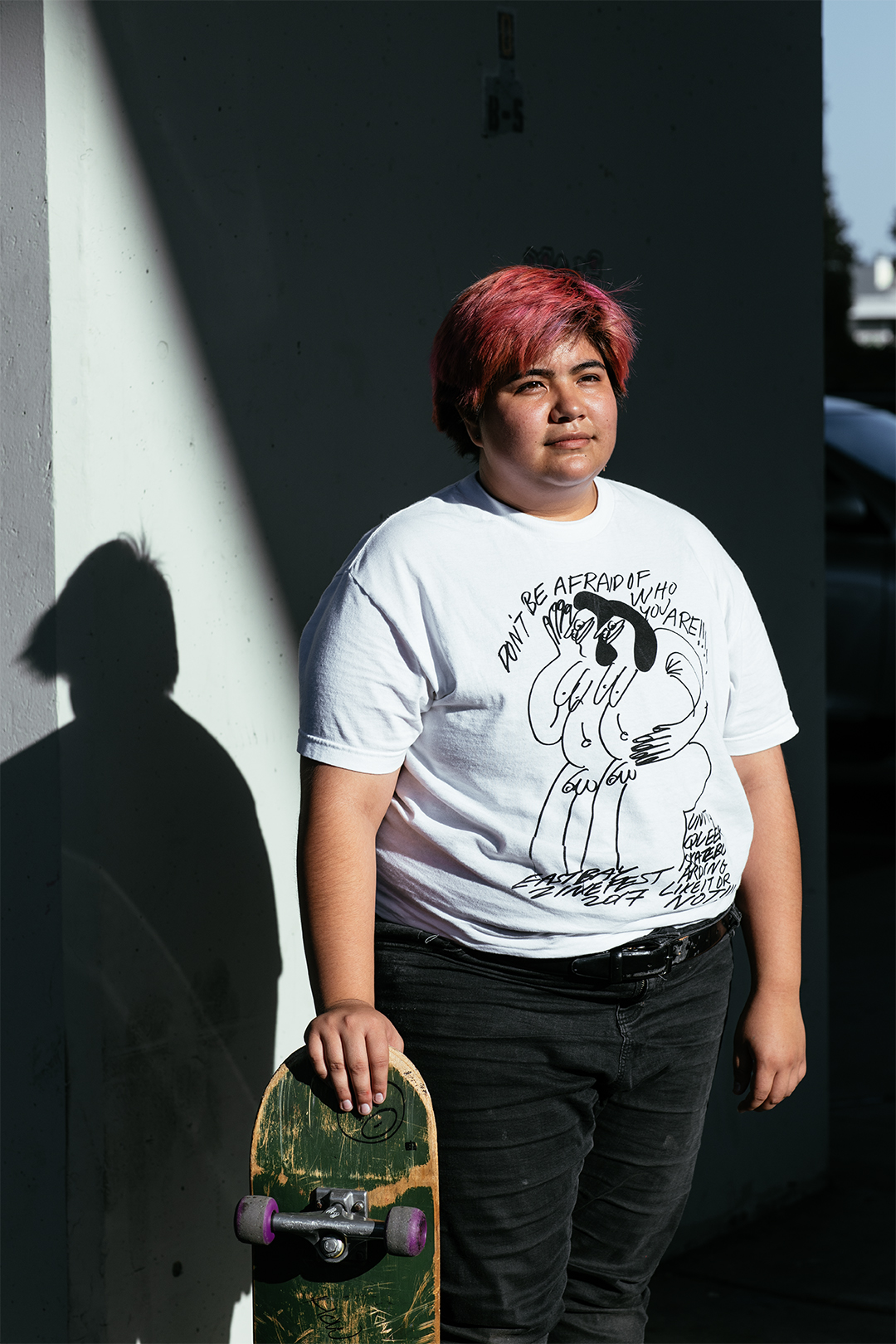 My first Queer Skate Day was 9/9/17, my experience was sweaty… and fun. At first, I was unsure to go because I’m not that good of a skater, but I told myself it doesn’t matter what skate level I am at. I’m going to go because I am a queer skater and everyone else there is too. We’re here to show that it’s ok even if you’re not that good at skating yet. This is a place where you can be yourself. 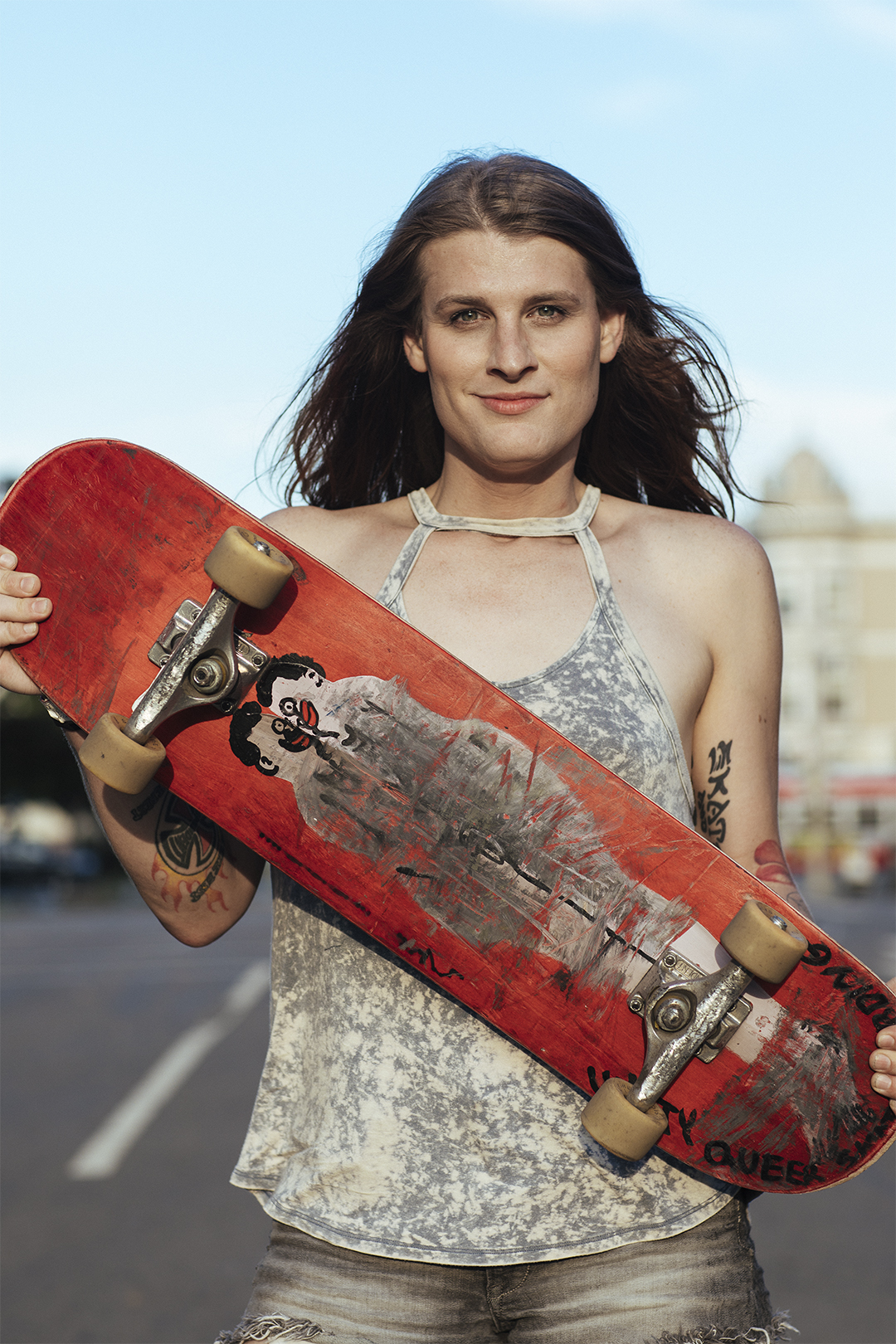 My first Queer Skate Day was at the Rockridge slappy spot, and I was really amazed at how many queer skaters showed up. Orientation isn’t really a thing that comes up often when I’m skating, so it’s been a relief to see so many queers and allies visible in one place. 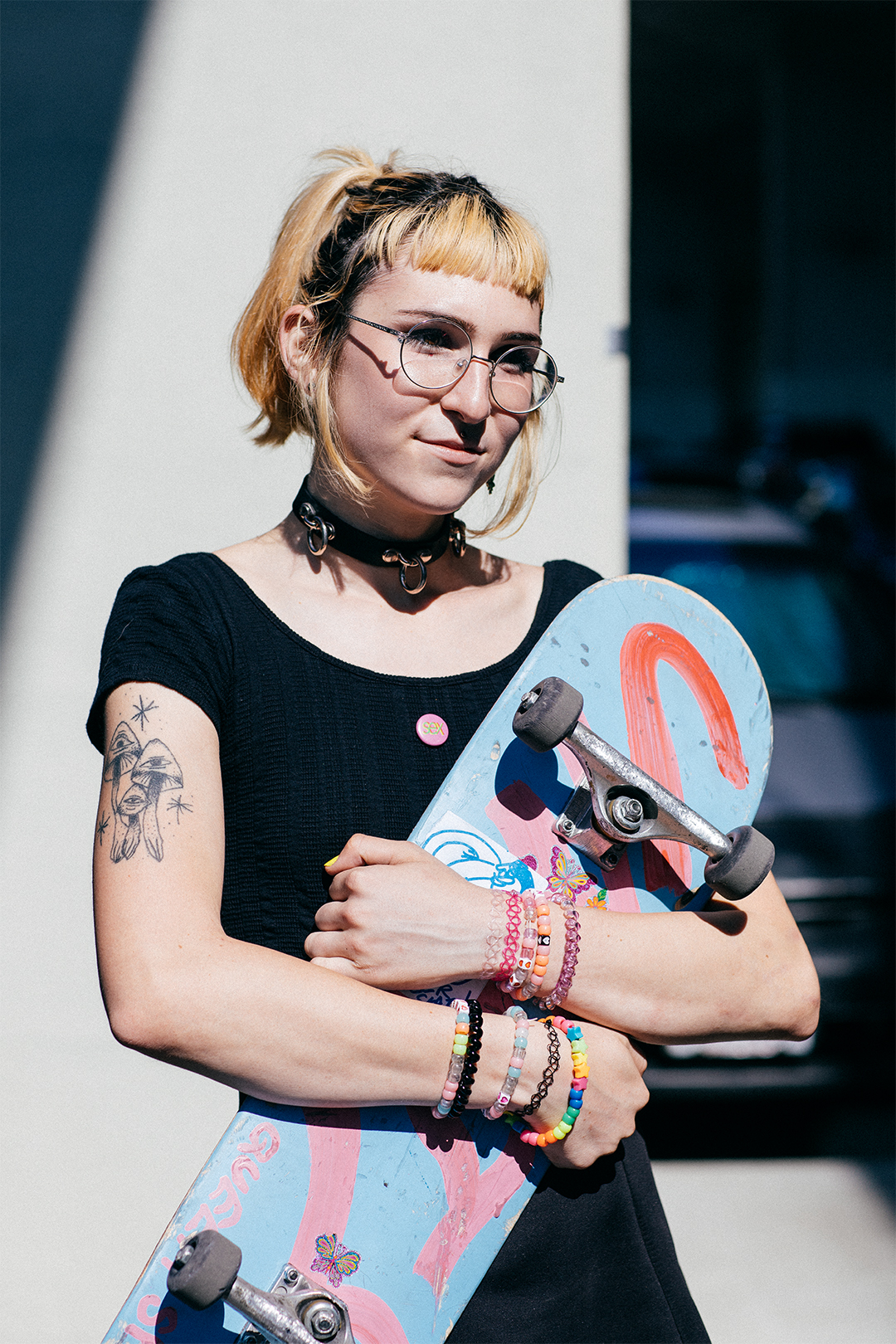 I first heard of Unity from one of my friends while hanging in SF in like April of this year (2017). I just remember hearing something about a queer skate company/crew and not too much other info. I ended up seeing a sticker at the MacArthur Bart station, so I looked up Unity skateboarding and it blew my mind. Then I read a few articles and looked at every Instagram post I could find, lol.

My real first Queer Skate Day was the one on July 5th at Rockridge Bart. The feeling in the air for me was amazing and overwhelming at first. I loved being surrounded by other queer people. And I couldn’t believe that there was that many queer skaters just in the Bay Area! It was so relieving and inspired me to skate more and more.

I always meet new people at every new Queer Skate Day. Jeff and Gabe have both given me so much support and inspiration. It’s amazing – they are seriously my heroes. 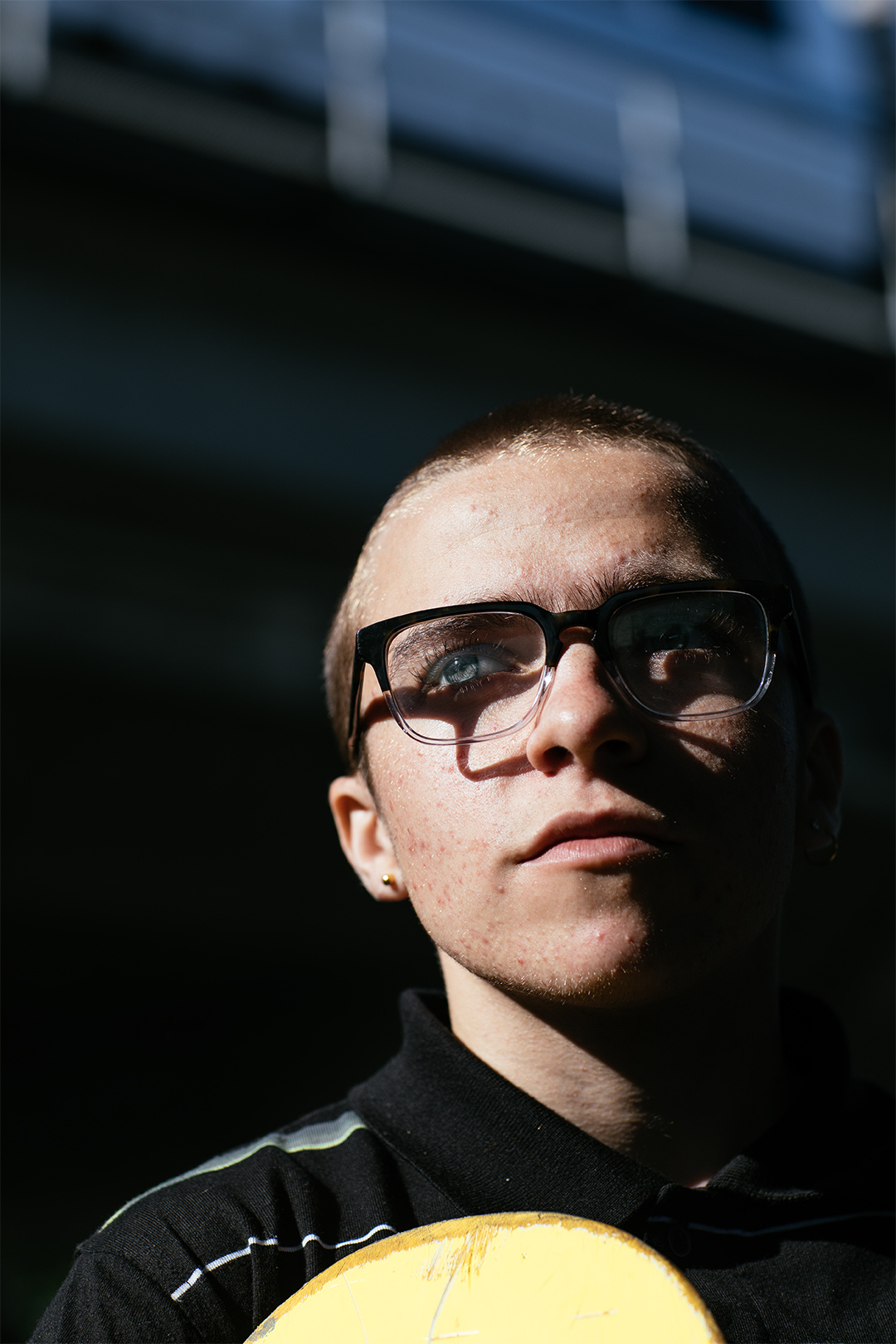 I first heard of Unity last spring (2017) when Vice I think ran an article on them. I read it was and mind blown, immediately I dm’d Jeff on insta saying how amazing and powerful he is as a person and how Unity is as a movement. Shortly after was my first Queer Skate Day at Unity Mart’s opening. It was amazing and so rad, seeing people who dressed like me dressed out of the “ordinary”. 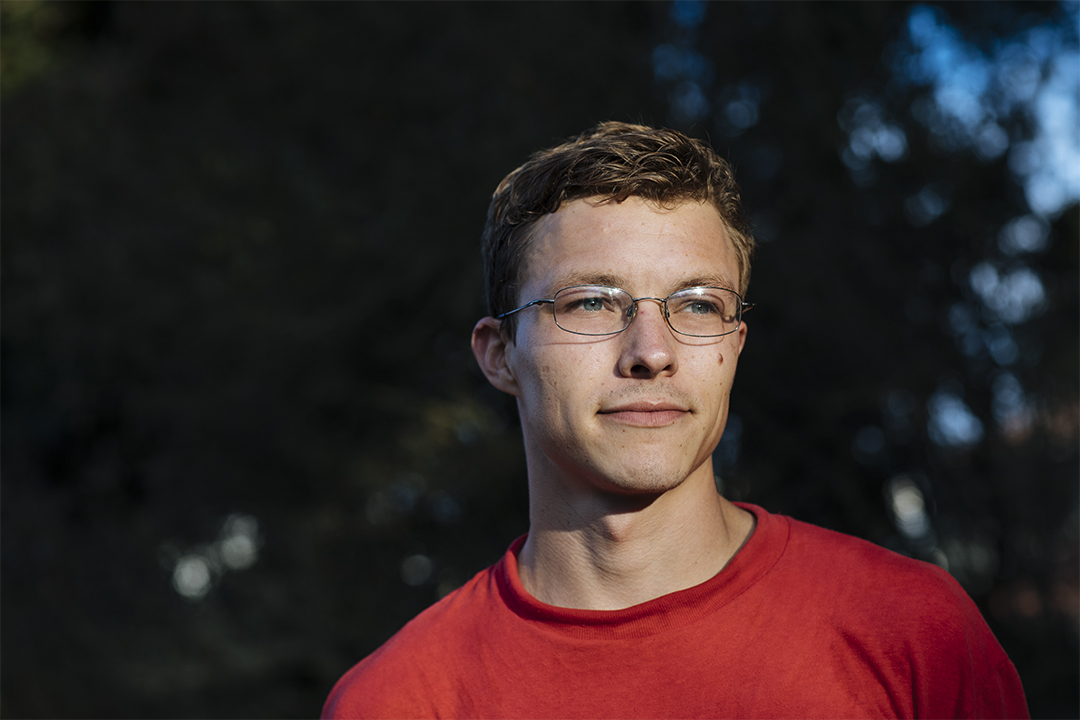 I was walking down the street in Berkley with my friend who kept telling me about Unity and how I should meet Jeff and Jeff happened to be across the street walking with Gabriel – so we walked over and talked for a minute and made plans to meet up the Oakland DIY to skate. That’s when Jeff was telling me about painting boards and maybe putting together a team and asked if I wanted boards and he’s been helping me out ever since. 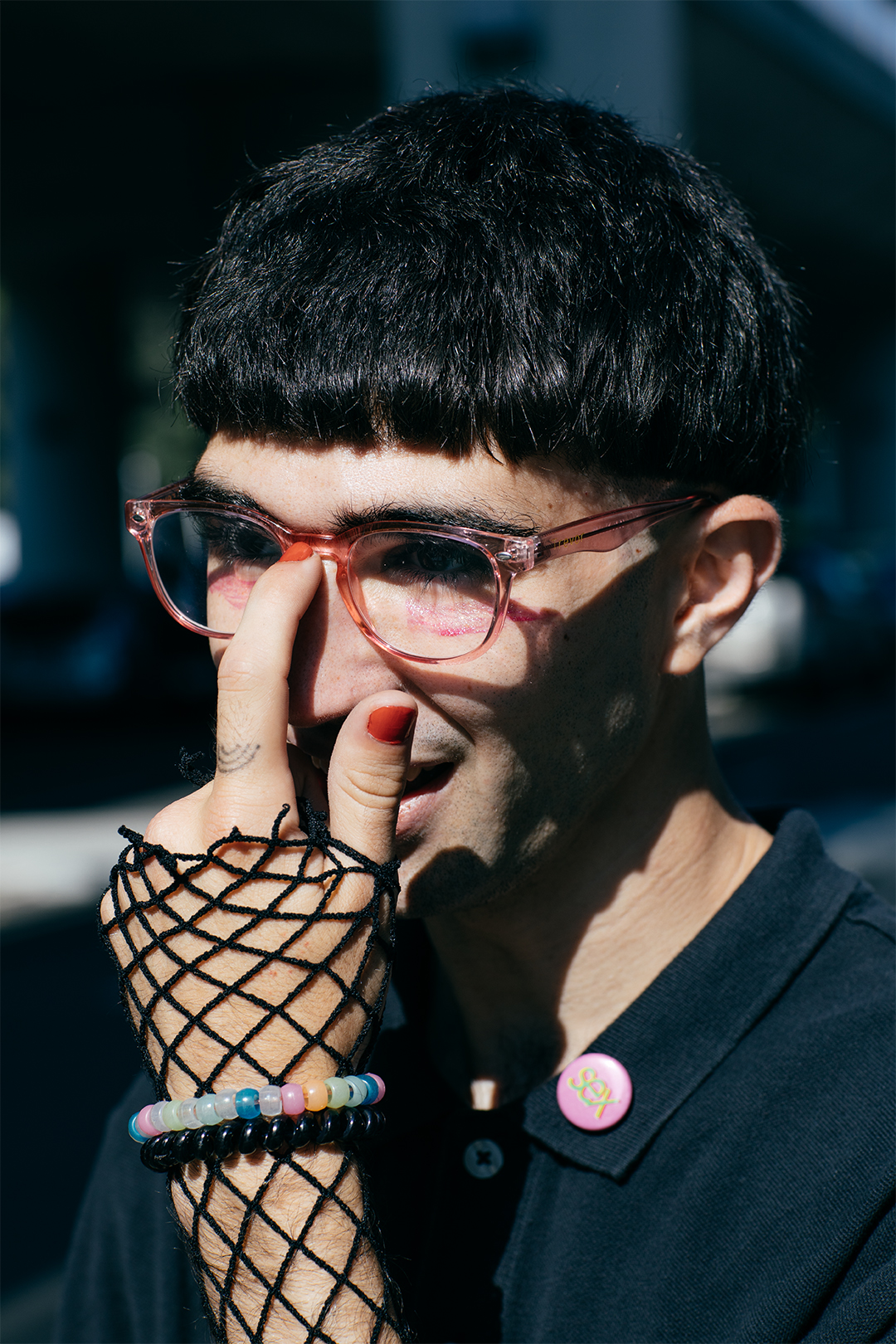 I first heard of Unity Press and Unity the band, that’s how it all started. Jeffery and Gabe and myself had bands that all played shows together. I really liked all the zines that Jeffrey was putting out through Unity Press. None of us realized that each other skated when we were younger, then me and my friend Stevie started going skating after we bought Meow boards cause we like, HAD to buy boards from them ‘cuz we just thought it was the coolest skate company we ever saw.

We would go skate around Oakland and I think Jeffery saw us skating on Instagram and then hit us up to go skate, just like “omg that looks so fun lets go skate soon!” We skated like three days in a row, me, Stevia, and Jeffery and at some point Jeffery said he wanted to paint skateboards. Then we started talking about how we were all queer and how cool that was for us to be skating together.

The next day Jeffery showed up like “Hey if I start a queer skateboarding company will you guys ride for it?” We were like “DUUUUHHHHHH!!!!” I’ve been skating again almost every day since Unity started.