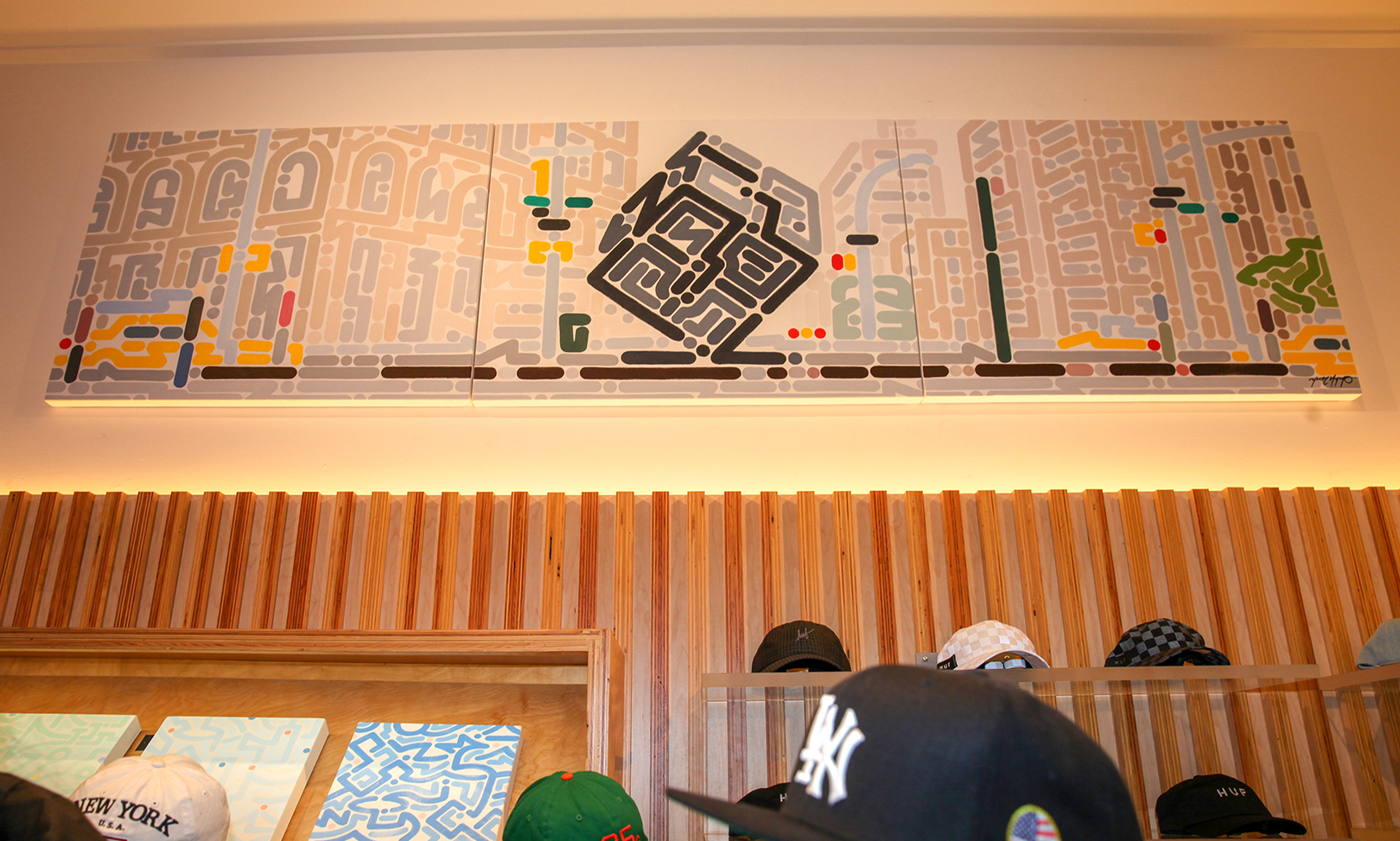 What’s HUF been up to recently? Did they really sell the company to some Asian gangsters? Is Keith Hufnagel on the beach sipping Pina Colada’s? Is the weed sock trend ever going to return?

I don’t have the answers to all of those questions, but I do know they did infact merge with another company and that the ship is going strong again, with their first move of the year collaborating with NYC artist, Yoon Hyup. (No, not the Berries 😉 camera dude).

Yoon, a New York-based painter and skateboarder translates dreamy cityscapes into simple, clean, and thickly colored lines, like this painting of the overly romanticized Flushing Meadows, or this deck graphic of the even more fetishished Brooklyn banks.

Scroll down to peep our launch party recap in SoHo and we’ll give dead ass 100 commenter points to whoever can best explain why every photo has at least a little camouflage in it. 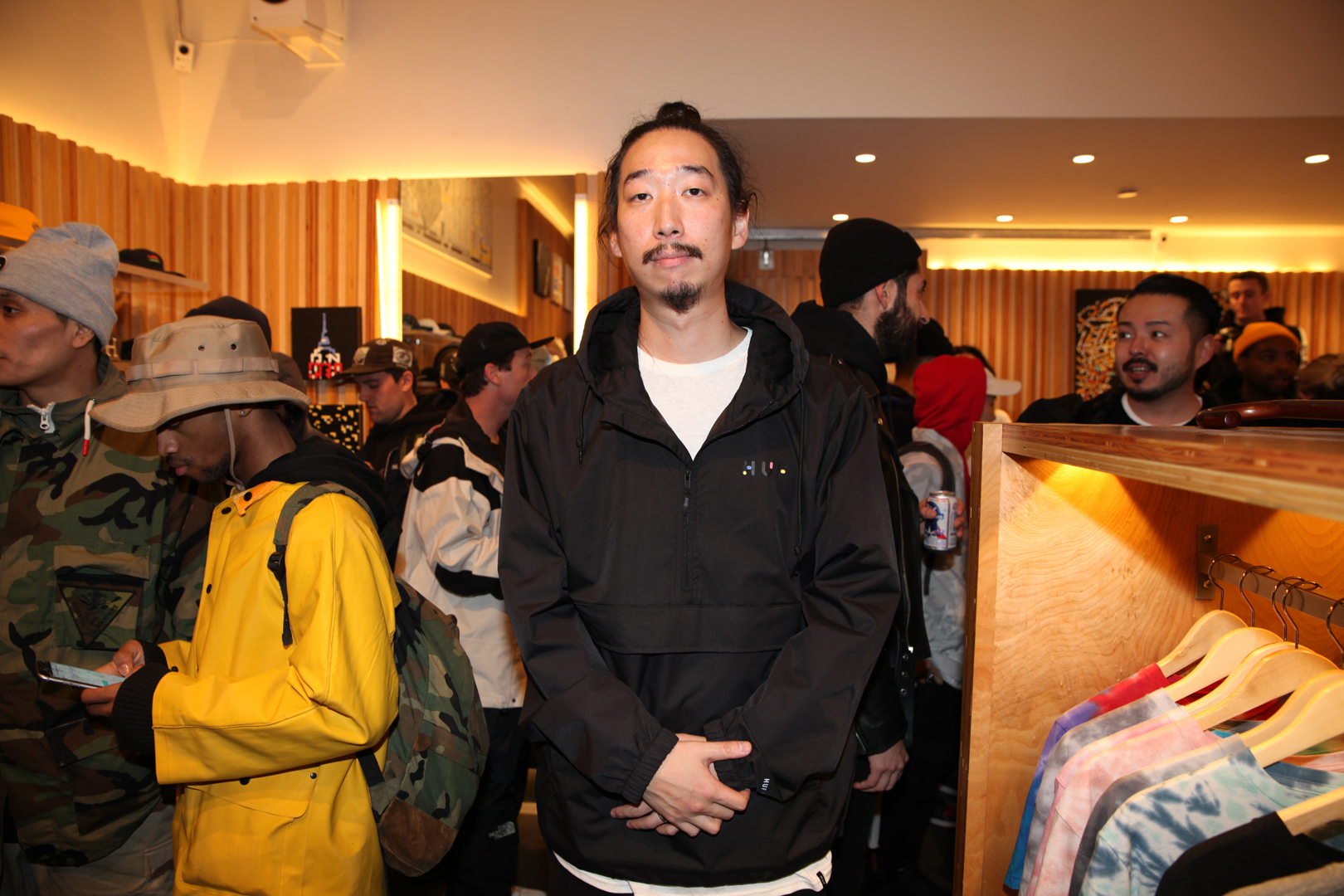 Portrait of the artist, Mr. Yoon Hyup. Pretty sure the man bun craze is over so his hair mound must be authentic. Manbuns got so trendy so quickly, and I wonder if too many bros just wore them poorly and ruined the hairstyle for everyone else. Do man buns deserve a second chance? Mmmmm… no. Nevermind. R.I.P. man buns. 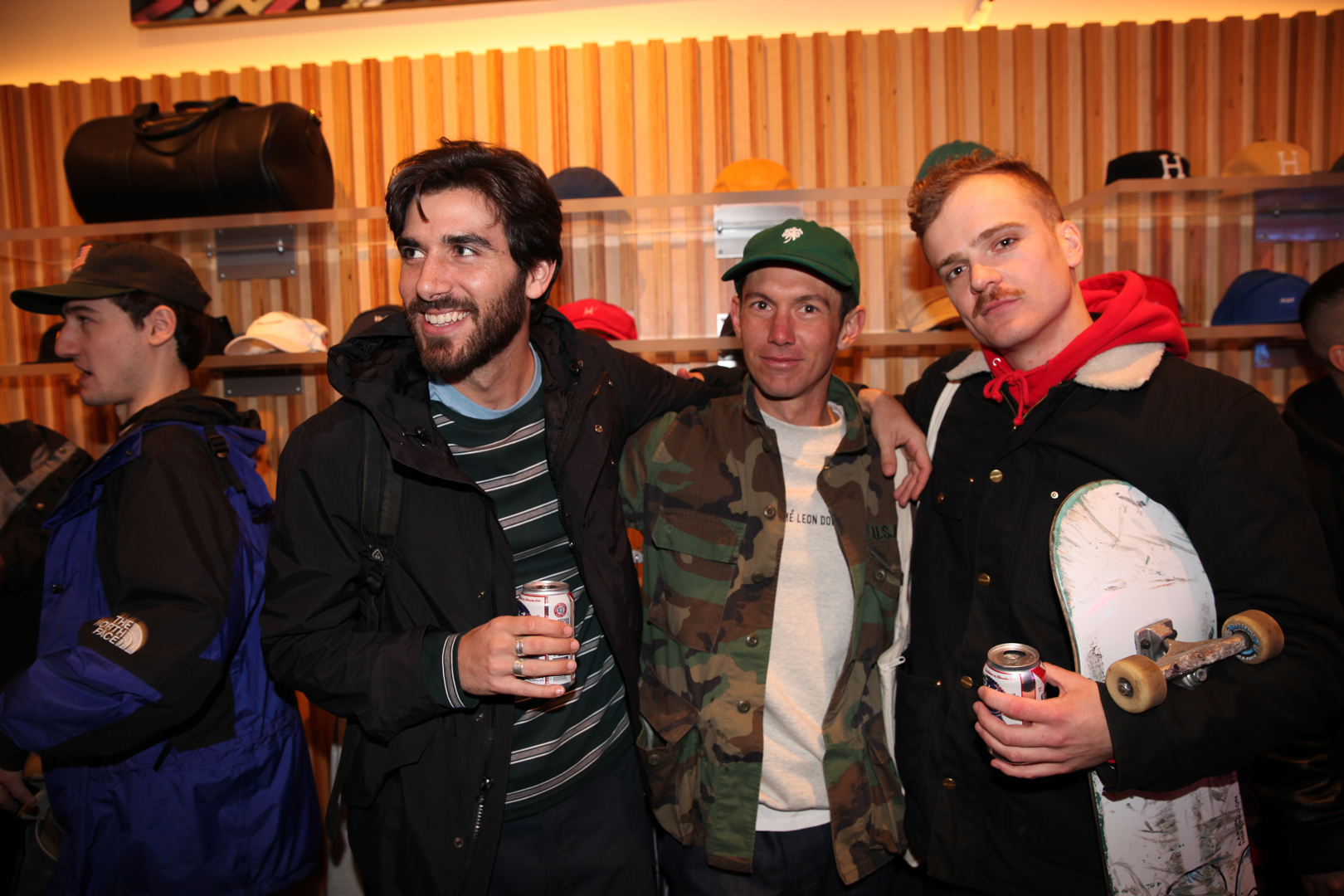 Jenkem’s very own Christian Kerr (the guy with the most controversial Office Picks) spent the night hanging with a combat leprechaun and some guy with a permanent chocolate mustache. Mr. Mustache approached us later on his own to ask if we wanted to take some photos just of his ‘stache but we declined. 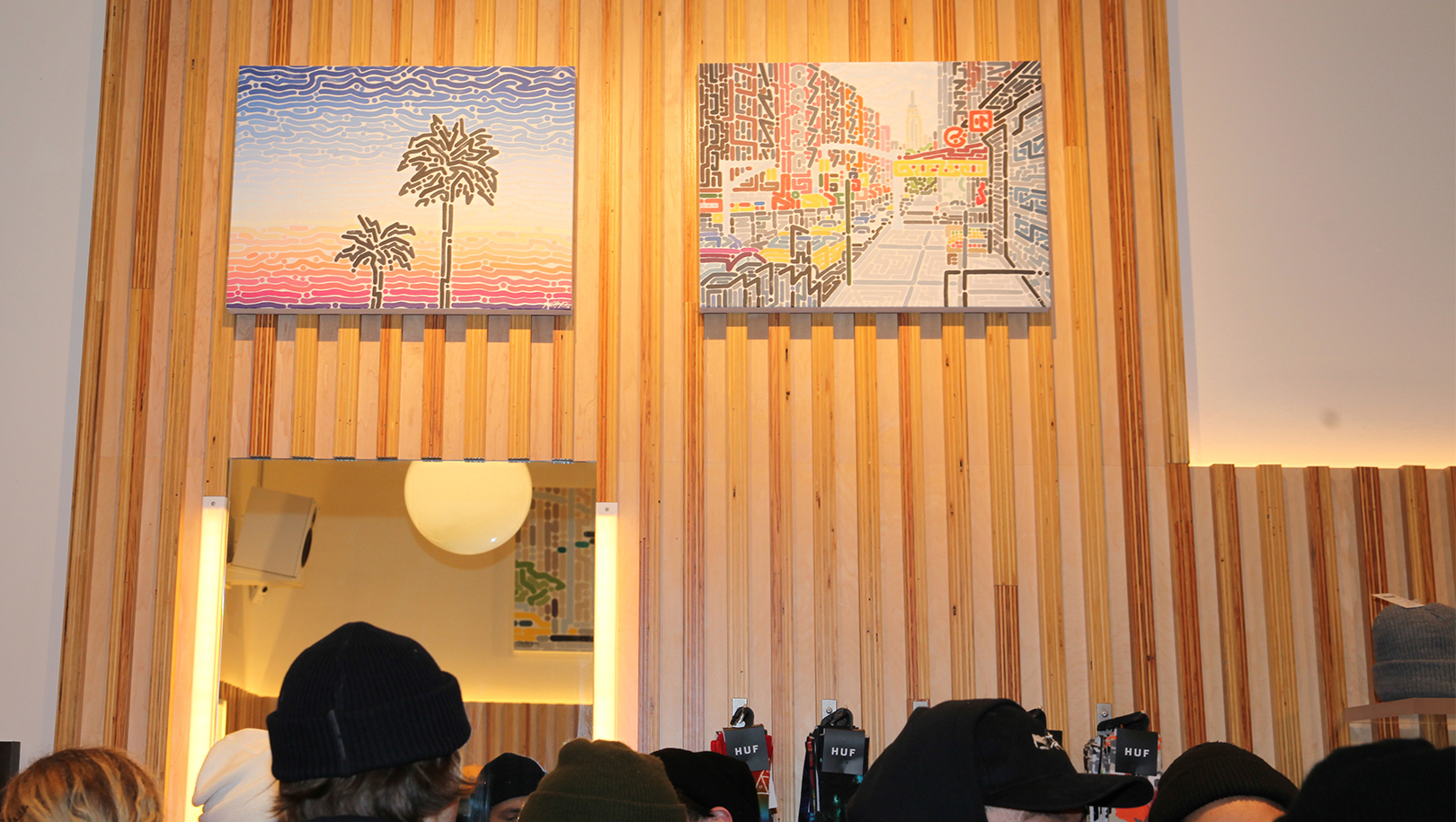 Lines, amirite? Make ’em vertival, horizontal, heck, you can put a curve in that sucker if you want! I wonder who the first person was to call a series of skateboard tricks a “line.” Probably some guy who’s grown bitter and old and now drives around Florida in a broken Toyota.
Good riddance. 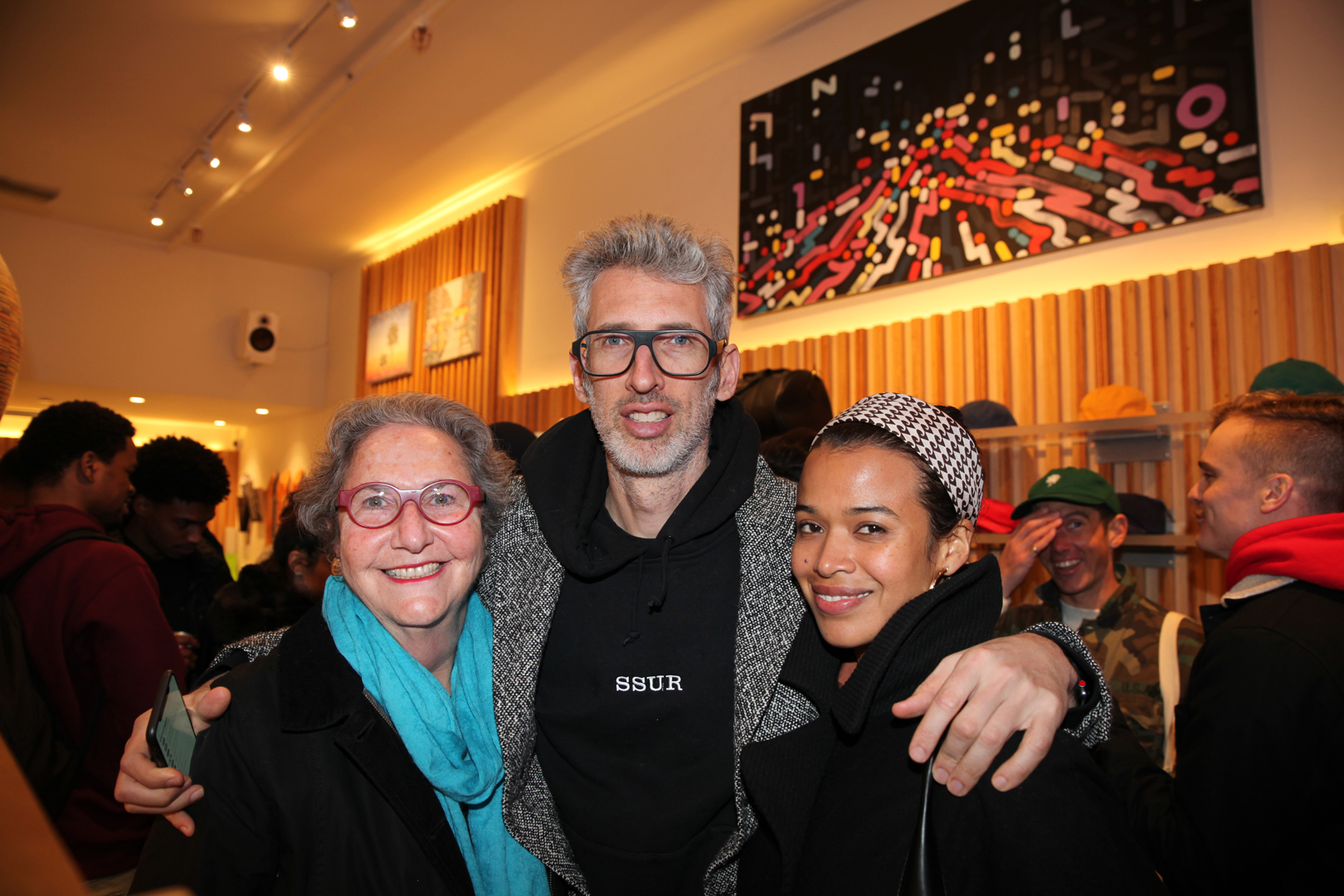 The legendary DJ Stretch Armstrong was happy to play mamma’s boy the whole evening. You can probably tell by her glasses that she’s responsible for his swagger. Under that coat is actually a crop top made entirely from Terry Richardson’s skin. Exclusive, bruddah. 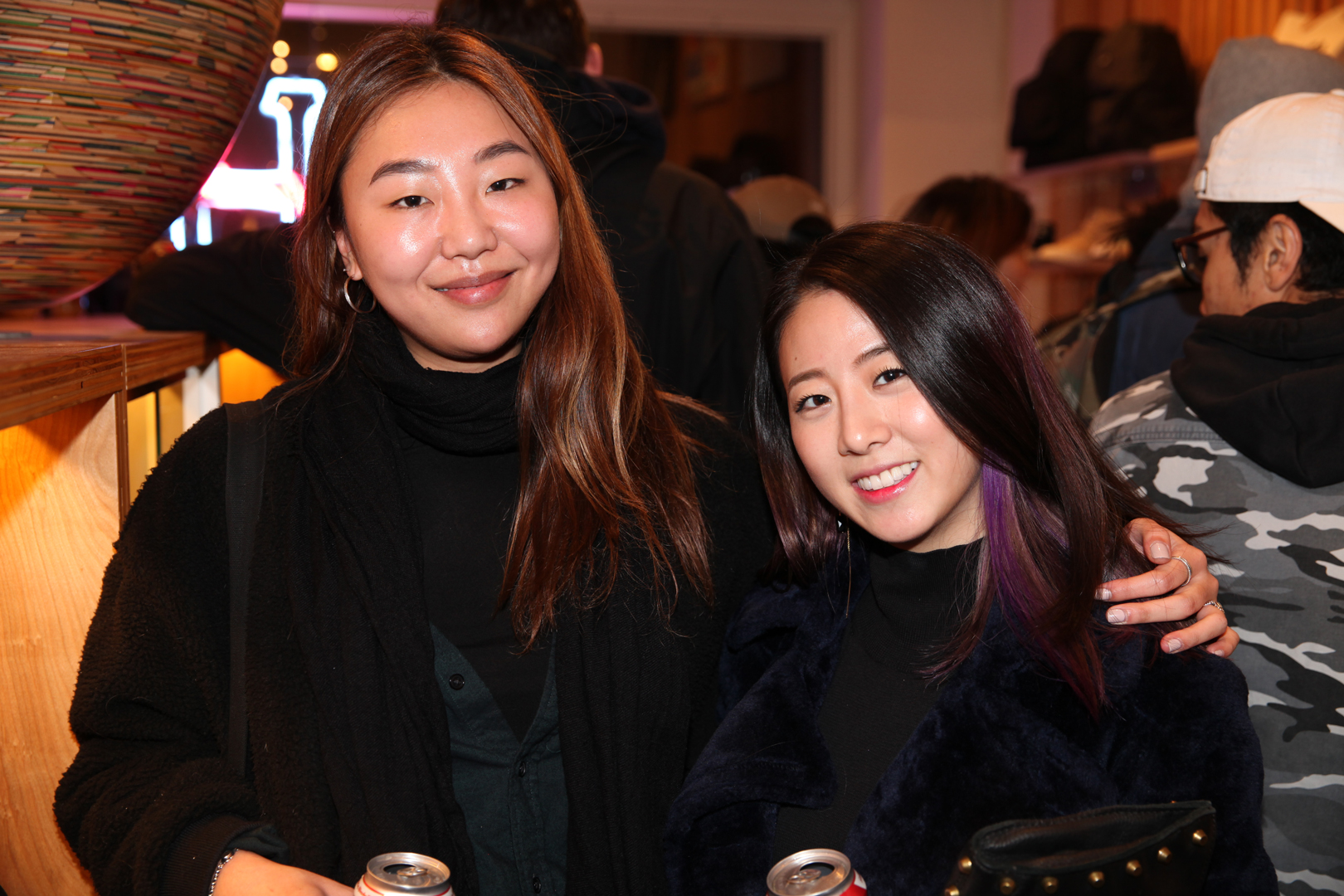 I hope the chick on the left isn’t too bummed that my crappy photo editing abilities don’t include reducing her T-zone glare. Look on the plus side: Your nails are on point, you and your friend’s hair is on point, and if you hit us with an email, we’ll find you the love of your life on Date A Sk8er. (Maybe not love of your life, but definitely love of the night!) 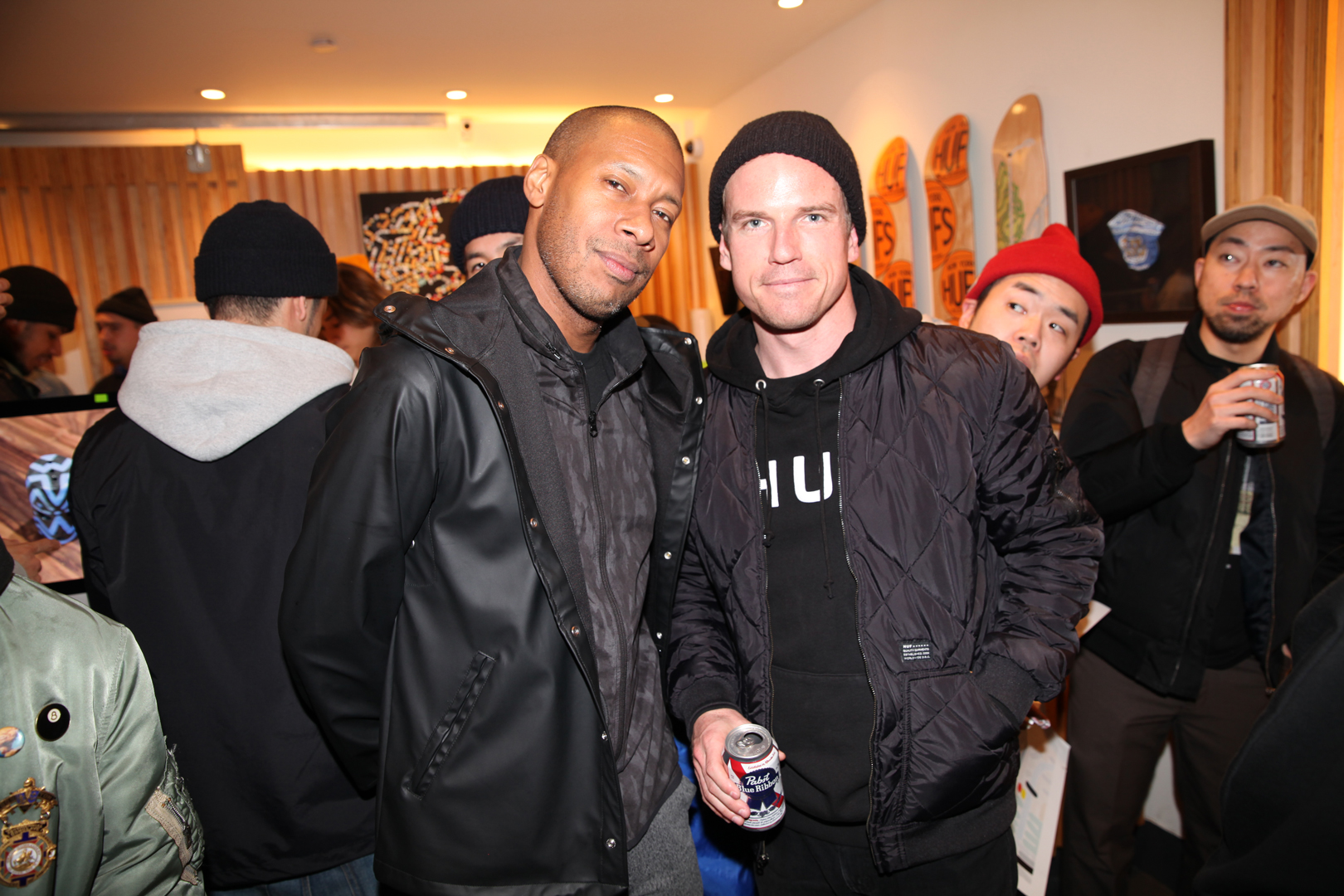 Former Supreme manager Alex Corporan (left), knows how to strike a pose and HUF bosses know how to keep their branding strong. Case in point, the two curious azns in the background were actually paid actors sent in to “look fiendy” around anyone wearing any HUF gear. Viral marketing 101! 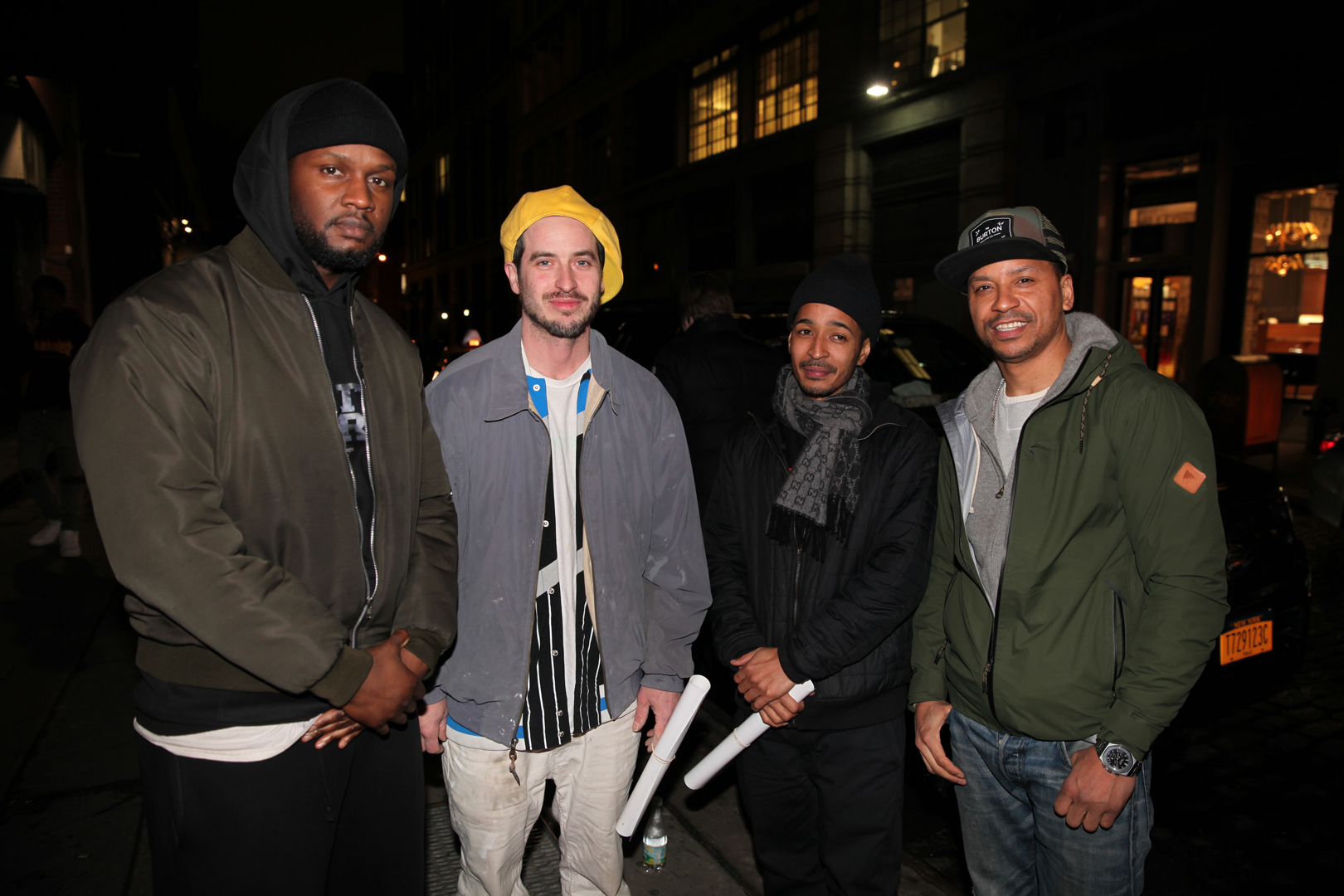 Quim Cardona showed up in his painting pants and yellow artist’s beret because he thought people would be painting at the party. Hope he wasn’t too bummed. 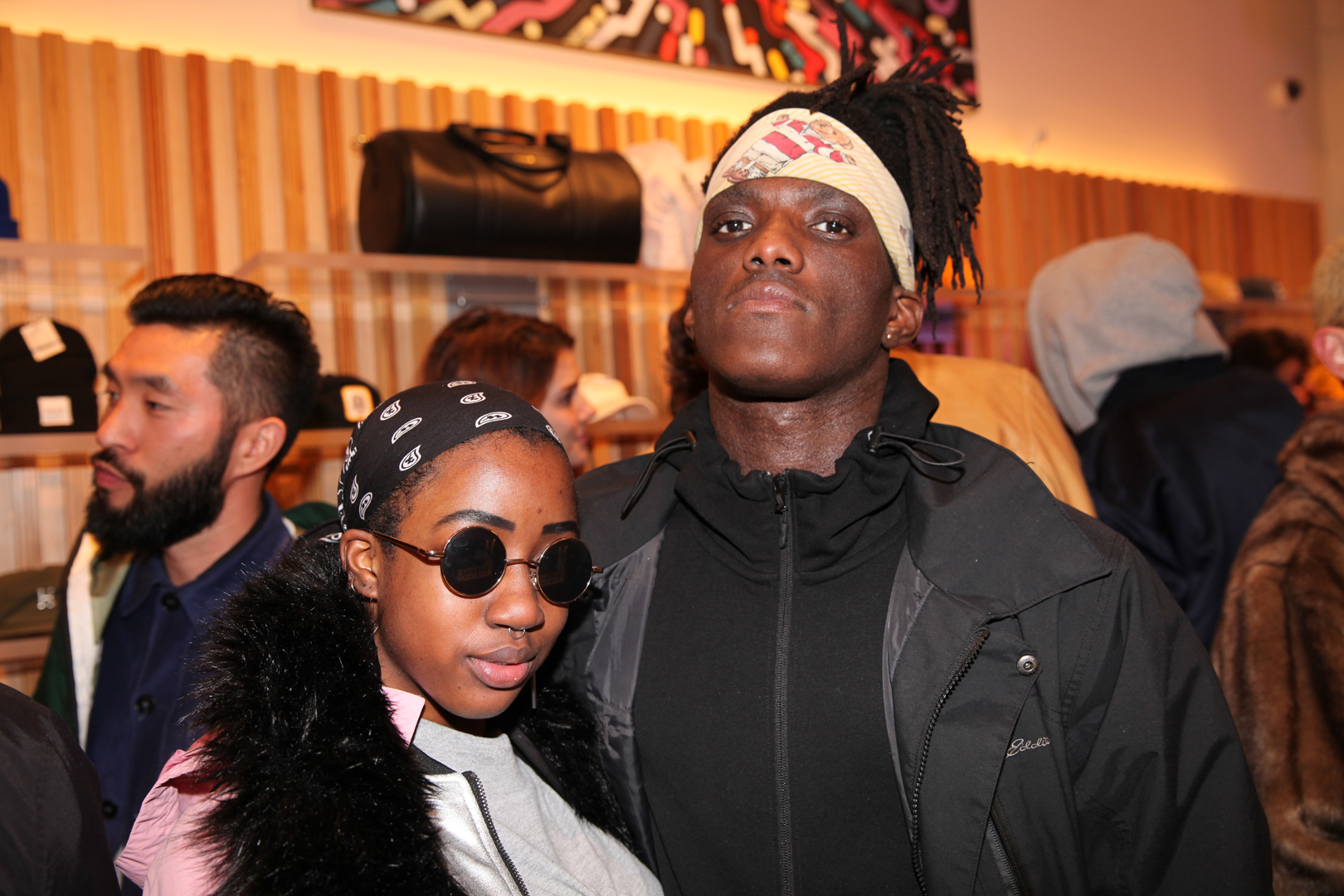 When guys wear that Polo bear I think it activates some brolic molecules in their blood that force them to act tougher than normal. It’s really just confusing. Are you hard or are you teddy bear soft, my dude? Can we keep it 100, B? Dead ass? 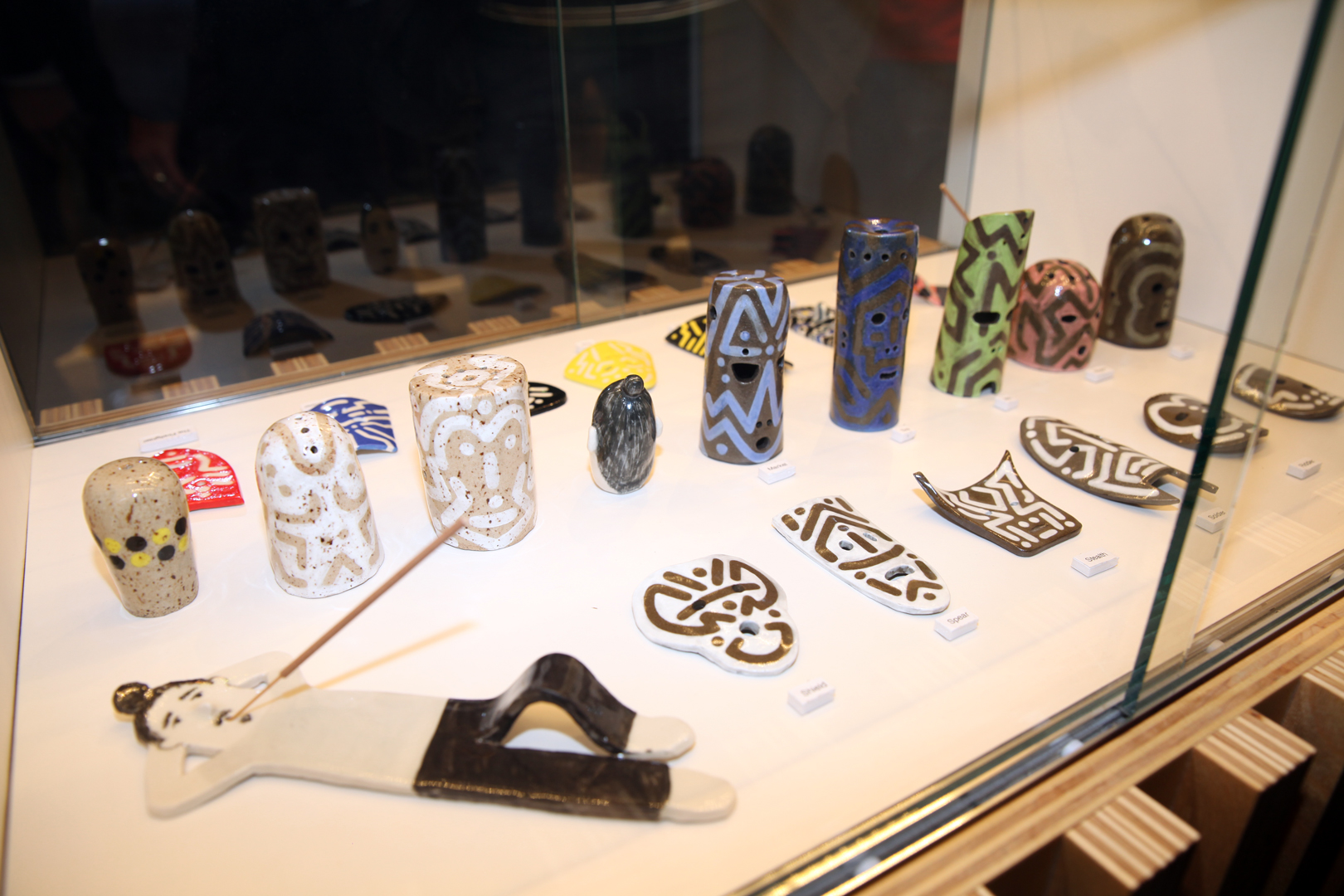