INSIDE THE BOWLING SKATE PARTY WITH KCDC & HUF 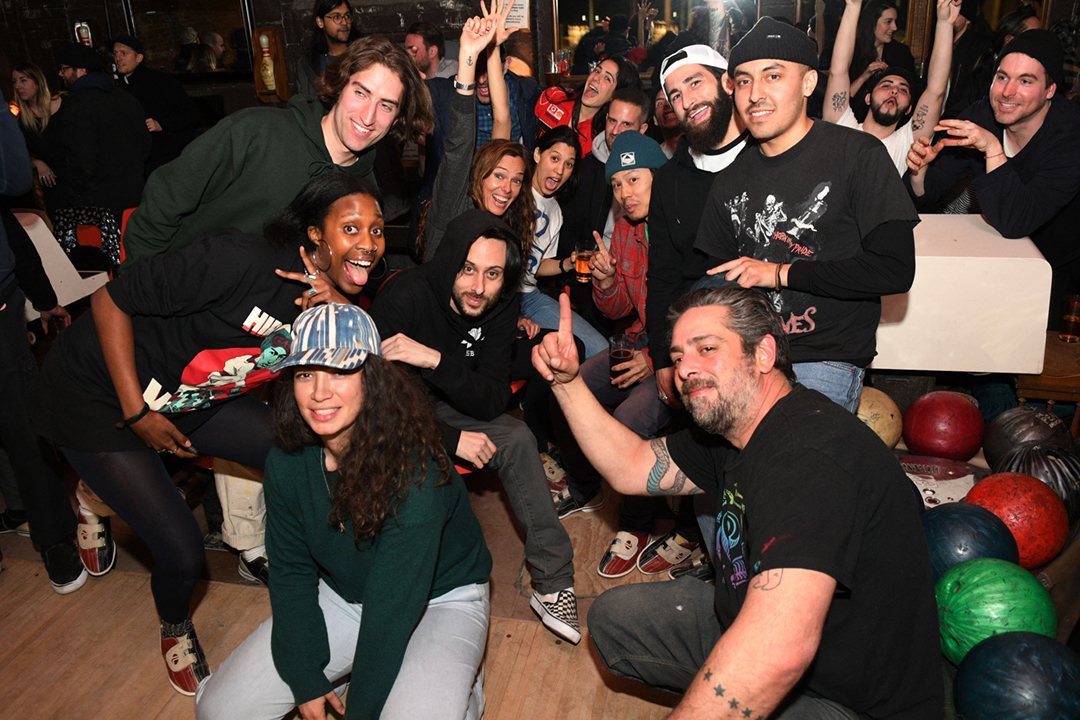 Over the past couple of years we’ve collaborated with KCDC during the winter to bring you Skate Night – a weekly place to skate and drink and embarrass yourself when New York is at it’s absolute worst weather wise.

This year KCDC decided mix it up a bit and take a hint from our main man Walter and said, “Fuck it, Dude. Let’s go bowling.” HUF backed the event fully and with the help of Coda and NYskateboarding we rented out Brooklyn’s most down bowling alley, erected a miniramp for the night, and got together to knock back some tall boys and pins.

Maybe Lil Kim said it best: “I haven’t had sex in 8 months. To be honest, I now prefer to go bowling.”

After only a couple of beers, our friend got all fired up and wanted to, “do the Ryan Dunn”. Of course, we didn’t think twice (because we are stupid) until our guy almost got caught in the thing. WARNING: Please don’t try to use your body as a bowling ball like the dummy we so proudly feature above. We didn’t really know at the time, but, you can get crushed to death by the pin resetting machine. You live and you learn (this time at least)! 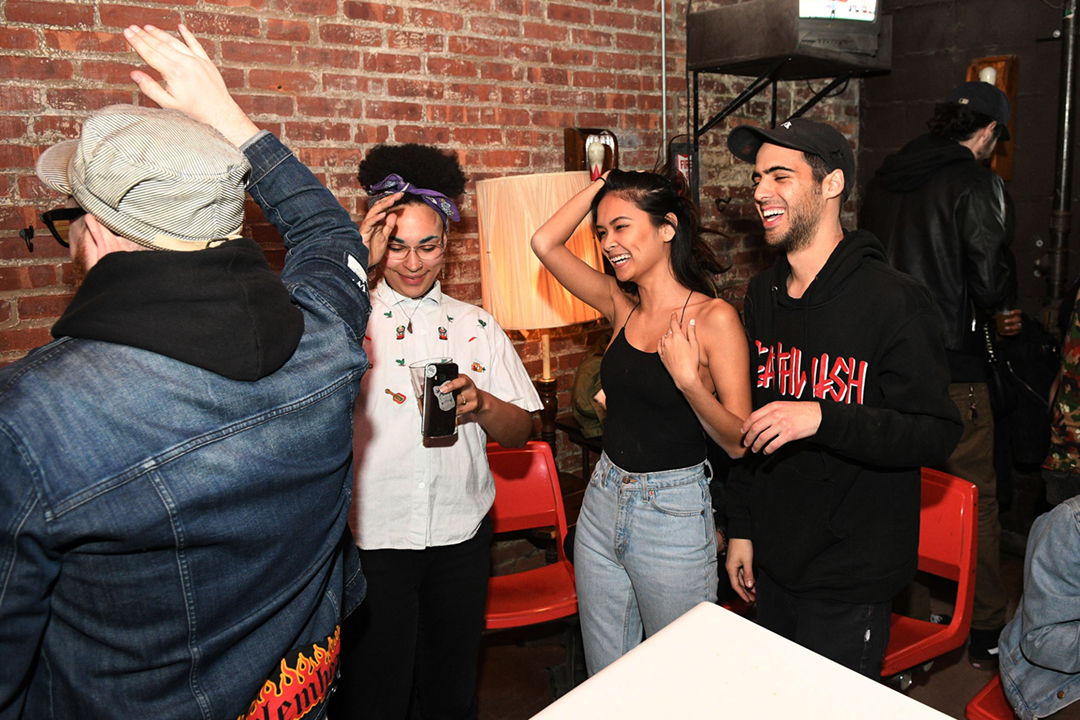 I’m not really sure how it happened, but it seems like recently bowling has been “trending” across skateboarding. The Dime crew’s infatuation with it has been well documented on their IG page, but Canadians are always hyped on different stuff than us Americans, like house music or poutine. 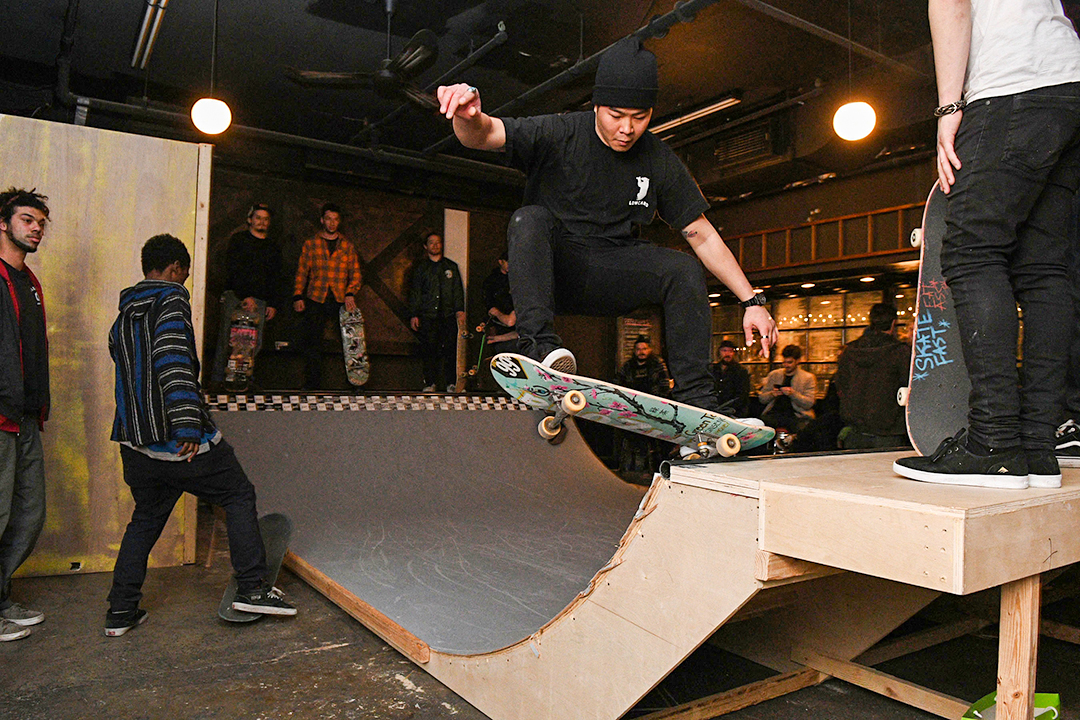 Somehow Amy, the owner of KCDC skateshop convinced The Gutter to let us build a mini ramp in the venue, which is usually unheard of in NYC because of space, insurance, death.. but she used her muscle (and charm!) to make it happen. Also, shout out to that “Skate Fast, Eat Ass” grip job to the right. Legend!

Sizzle Pie is a skater-owned / operated pizza shop originally from the Pacific Northwest, and recently they opened up a Brooklyn location. They were nice enough to hook it up with free pizza for the event, but as all things involving free anything and skaters, it was gone before anyone knew it. Our friend Miles was the only one smart enough to pocket pizza himself 2 slices “to go”. 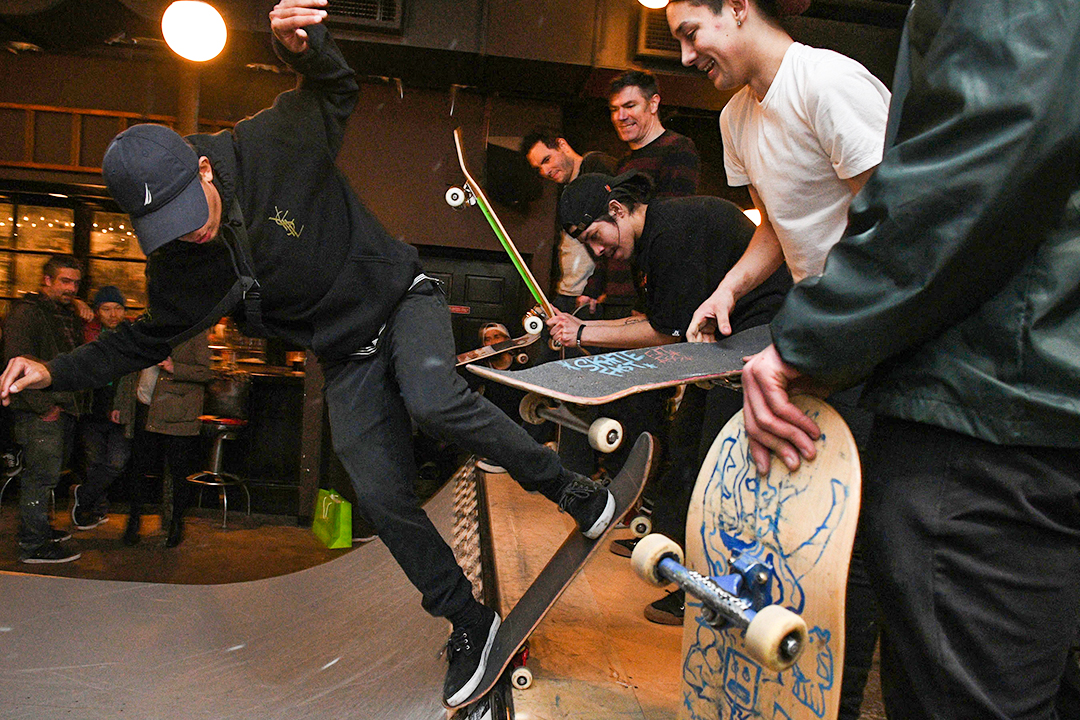 I had my doubts about the venue space being big enough to house a mini ramp and a considerable crowd, but it was just the right size for an intimate sesh with a few onlookers. You just had to make sure to keep an eye out for random flying boards here and there. Thankfully, nobody was injured, but I did see more than a few spilled drinks… 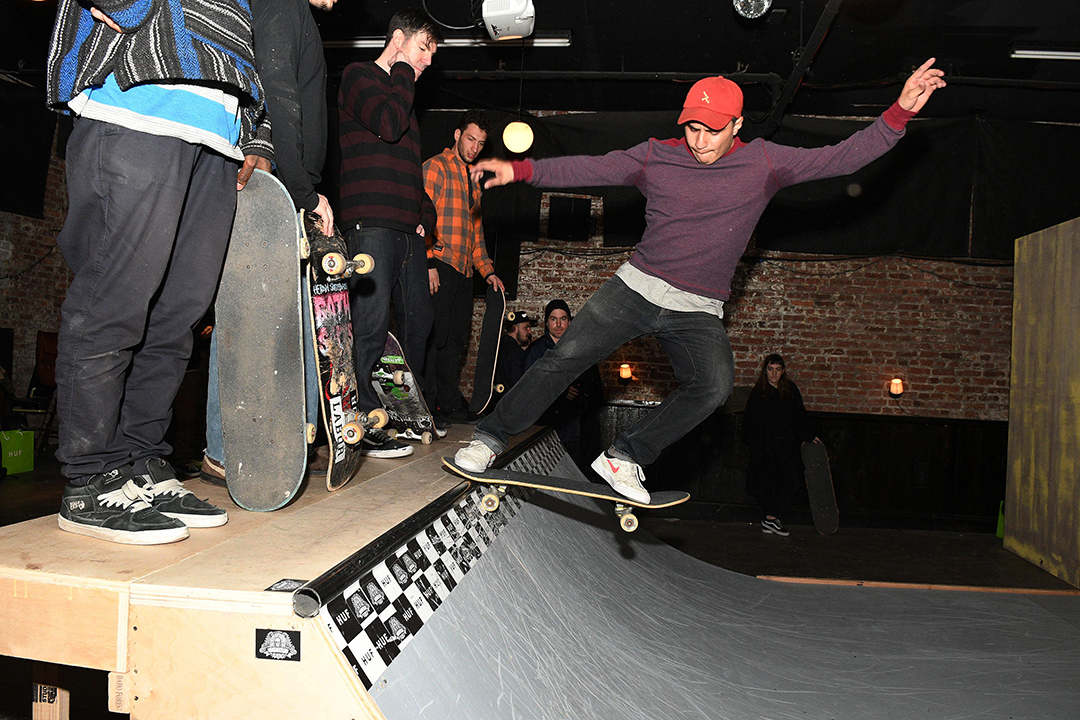 Oh yeah, it was pretty hot in there too. Them pit stains! 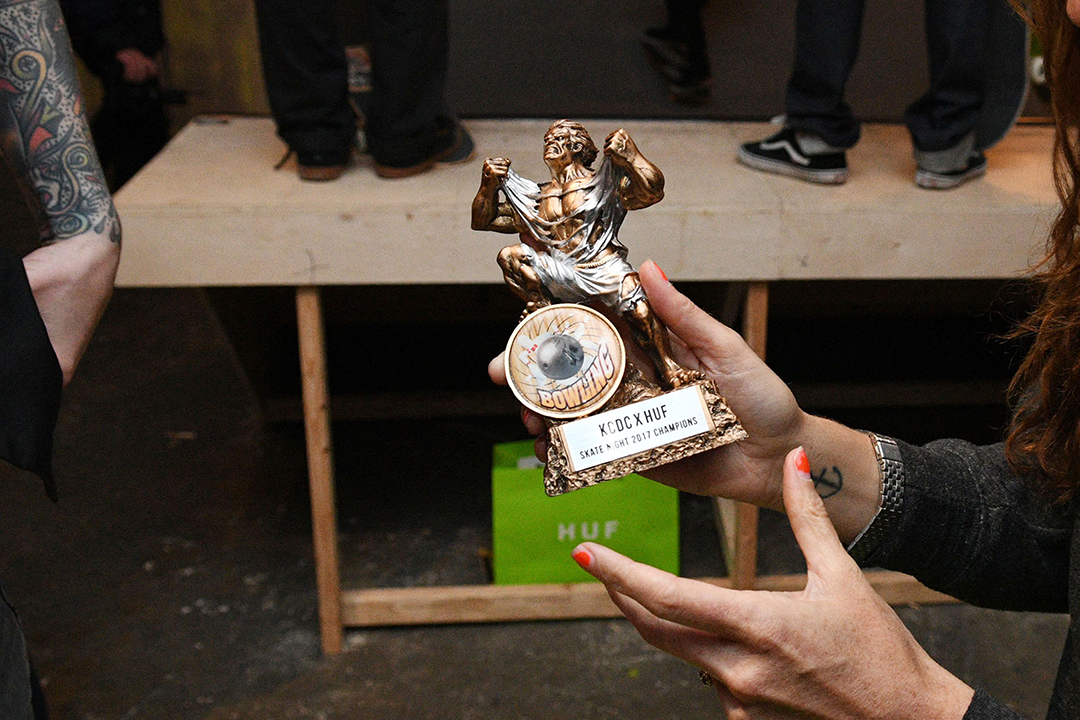 Aside from the skating, there was an “official” bowling tournament for any teams who wanted to sign up. We thought our ratty squad would take it all home, but things got pretty competitive quick, much to our surprise. HUF and KCDC put these trophies together for the winner, which is pretty great, since I picture most serious bowlers to be fat bald dudes with beer bellies, but we’ll let it slide. 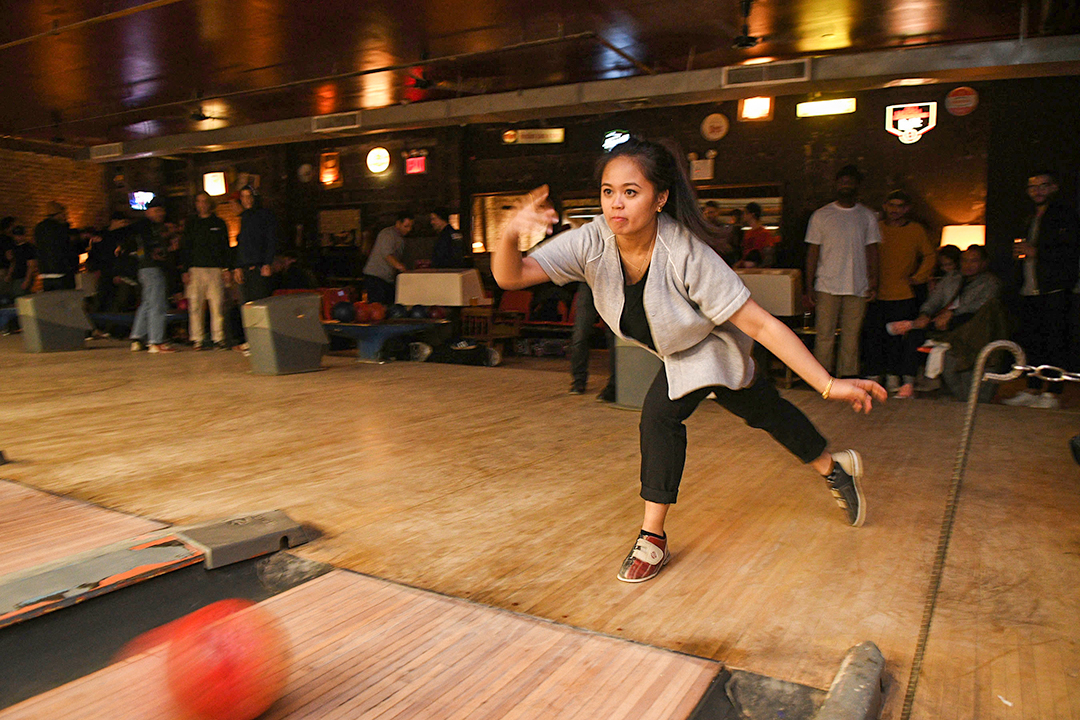 What’s the general consensus on bowling – heavier ball, less speed? Or lighter ball and huck the living shit outta it? I prefer the light and huck method, just because it’s more fun (especially when intoxicated), but I imagine a heavier ball with more accuracy is probably the path to victory. 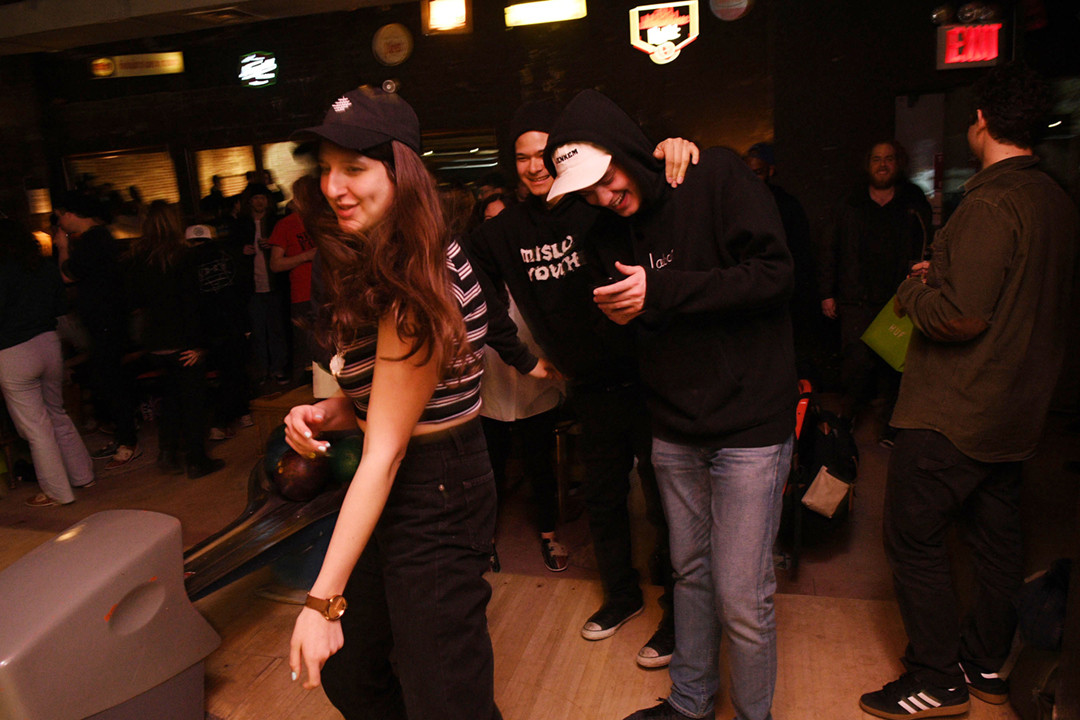 Bowling has to be one of the most primal activities a human can do, which is why I think it can get so emotional. Pick up a big heavy rock and throw it against a bunch of little rocks and see how many stick around. Pretty damn simple. I imagine without internet and iPhones, Cavemen must have been pretty good at bowling (along with other primal stuff like hunting and jerking off). 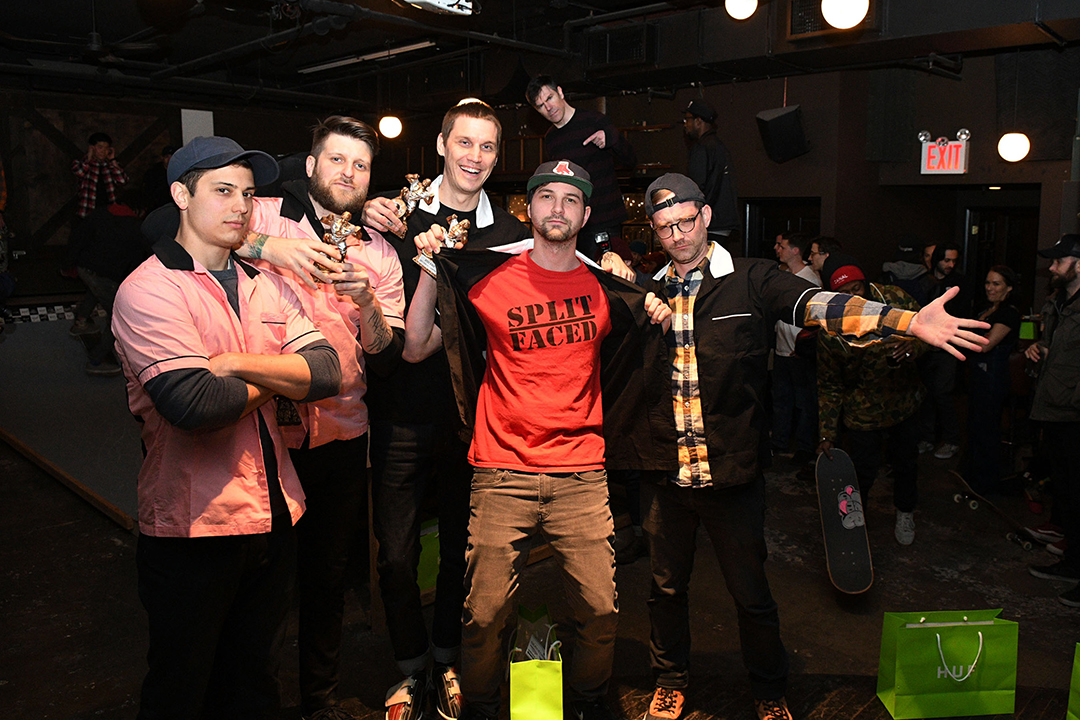 Split Faced ended up being the real winners, which we could have assumed immediately given their team kits. I think they were actually a *real* bowling team AKA don’t count it. Anyone who shows up to a bowling alley with a custom bowling jersey and their own ball will probably wreck your shit. Lesson learned.