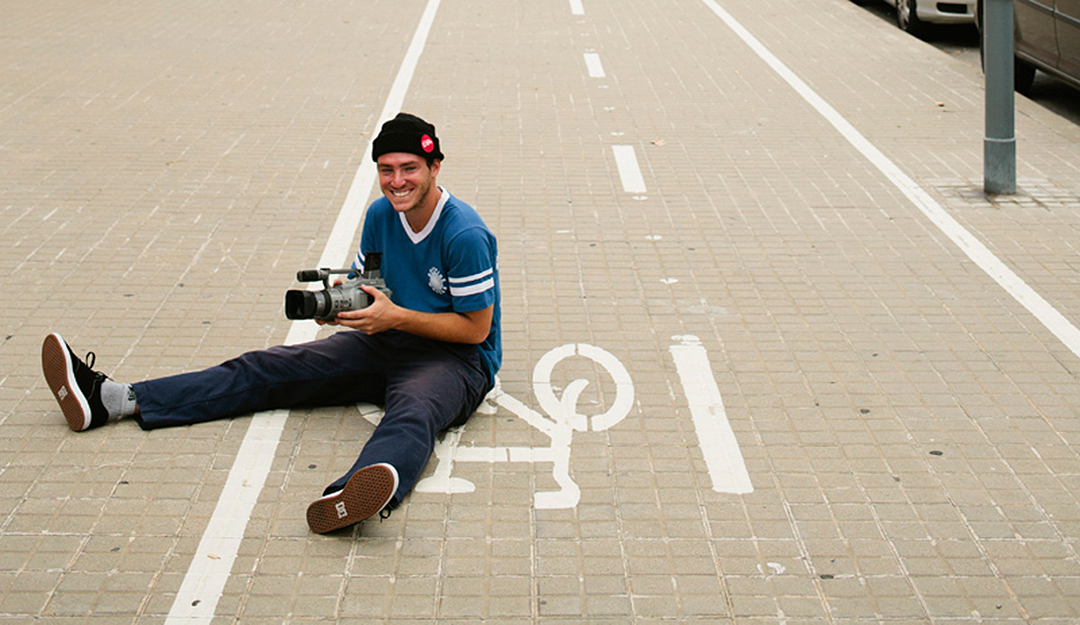 Yesterday we put up a video filmed and edited by Real’s Davis Torgerson, but we wanted to get the full scoop on whether dude is hanging up the Formula 4’s for filmer wheels or if this was just a one-off project he made while trying to come back from his injury. As usual, Davis was cool enough to put up with some of our questions – even the ones about his jizzface logo. For anyone looking to get into filming, this is a good introduction to the hardships inherent in being on the less glamorous side of the lens.

So you wanna talk about the video? It’s pretty solid, I like the music selection a lot.
I get nervous talking about it cause it’s like, I’ve never made something like that before. I’m like, tell me what you think honestly?

You can tell sometimes by people’s reactions on their face or when they just say, “Oh yeah, it was pretty cool,” or some generic comment.
Which is normally what I get for the video. [laughs] At the end of the day it’s just a long, dorky, throwaway montage, so it’s cool when people are stoked on it.

Wanna back up and tell the readers why you started it?
Yeah, basically I got hurt last summer and I had surgery on my foot. I couldn’t skate for like 7 months. I knew I was gonna have a part in that Transworld video, and it was all VX, so like a month after surgery I was like, fuck it, I’m gonna buy a VX1000 so that way when I’m not skating with Chris Thiessen [the Transworld filmer] I can hand my friend Tim Fulton the camera and can just film wherever I am, you know.

I bought the camera but my injury kind of lingered so it took a super long time to recover. So I was like, fuck it, I’m gonna just jump in the van and start filming people. I was telling everyone like, yeah, I’m gonna make a video, and I basically just got in the van and poached all of Tim Fulton’s angles. [laughs] So I kept saying like, yeah, let’s make a video, and eventually I had all the footage and was like, oh shit, I should probably stick to my word and do something with it.

Yeah, I think it looks awesome, I’m just trying to think of perverted questions to ask you.
Yeah, maybe subconsciously we’re trying to get people to talk about it. He sent me the file and the name of it was “slimeface”. So I don’t know what his motivation was. The graphics in the vid are all real simple, he has way sicker stuff out there too.

And what about the name, Naptime?
Oh dude, there’s nothing there, I just thought Naptime would be funny. There’s no meaning there at all. Should we sit here and think of a meaning so we can tell people? We can go deep and inspiring, like, “You know when you’re like dreaming about skating?” [laughs]. 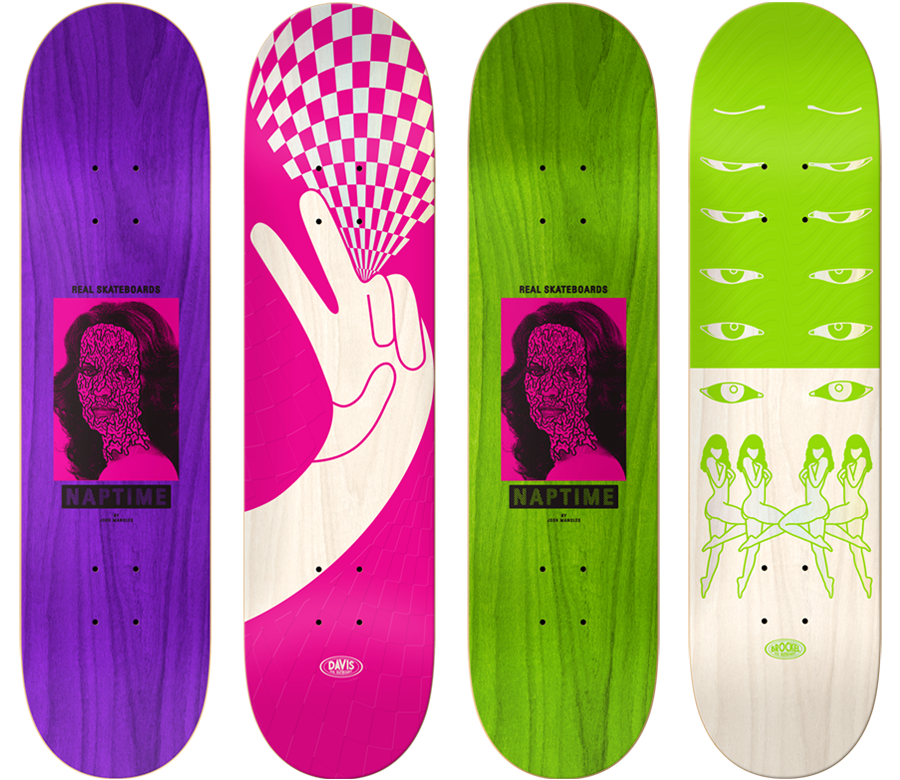 Apparently you have some boards coming out based around the vid? Tell me about them and where these graphics are from?
When I showed the video to Jim [DLX President] he just got super stoked. He may have mentioned a possible graphic to go with it, so I hit Josh Manoles (who did the graphics in Naptime) up and mentioned that to him and got him in contact with Andy, the art dude at Deluxe. Honestly I’m just hyped that with this stupid video we were able to do some cool boards to go with it. I didn’t really have much say in what the graphics were, I trusted them. But I’m pretty psyched to be able to look back at these graphics and remember this time period.

What was your favorite skate video growing up? Any current video influence Naptime?
Fuck thats tough. I guess the Sorry video had a huge impact on me growing up.  It was my first video, and those are the dudes I looked up to for a couple years.  Every time I watch it it brings me back.

As for inspiration now, one would have to be this video called Double Crossers.  It’s this homie Jake Durham that made it, along with Josh Manoles’ graphics.  So that sort of got me psyched on Josh’s little animations. I also get super stoked watching that lurknyc shit. I love anything that’s just raw skating.  Like all of the Emerica b-sides and shit like that. Miner is probably my favorite skate filmer and editor.  I almost put out all the footage I had just raw cause I find it so much more interesting.  You’re not really being persuaded with editing and slow-mo or shit like that.  Just pure skating.

Favorite non-skate movies?
I love Fargo.  That might be biased being from Minnesota but I just love the Coen brothers.  I guess that dry/quirky humor. I like Inglorious Bastards a lot as well, I guess for the same reasons as Fargo.  I’d say I’m a fan of Quentin Tarantino movies, some more than others.  And besides those I’m all for stupid shit.  It doesn’t get much more classic and quotable than Dumb and Dumber.  Never mad at a nice mind numbing movie at the end of a long day of skating… 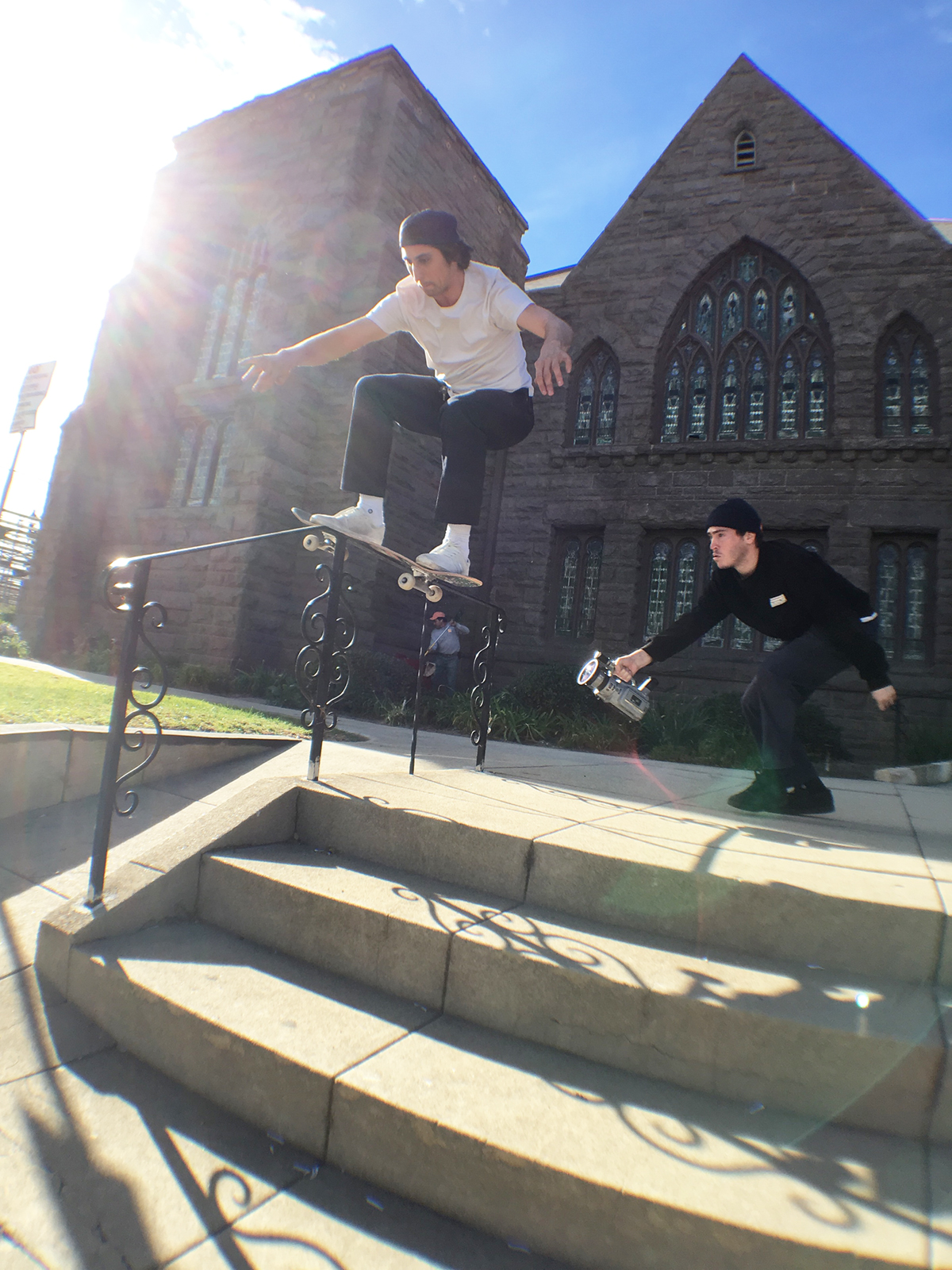 Where’d you get the VX1000? Aren’t they hard to get now?
Dude, Amazon refurbished! The fisheye came from Mikey, and he got it from Ty [Evans], so that’s kind of cool. So any time someone was filming a trick and struggling I’d be like, look, dude, this is Ty Evan’s fisheye, you gonna let this thing down? Refurbished VX1000s are probably like $800. The fisheyes are like $500 still too, which is a lot.

Considering you were a filmer for a little bit, is there anything you learned from the experience that gave you newfound respect for it?
So much respect. I don’t have the patience for it. I remember Jack did a line at these green ledges, but it took him a while (a while for Jack is maybe like 30 minutes or something). I remember towards the end I was like, holy shit, I’m fucking tired. Basically like, “Dude, just land it already!” [laughs] It made me think like, wow, I’ve been this dude so many times. It’s a lot of work, people don’t realize.

Also, filmers have bags, so people are like, do you have the wax? Do you have the tool? Do you know the spot? In a way I feel like skaters don’t even think about what spot they wanna go to, you know? It’s just like, “Hey, what spots you got for me?” And I know that first hand. I read something somewhere where someone was saying that basically filmers make video parts and the skaters will skate and do what they do, but the filmers will take them everywhere and make it look good. They’re like the creative directors.

Would you consider continuing to film or become a filmer if you get a good reception?
Naaah, I think I’m gonna try to be a one hit wonder. I actually sold my camera already. Full quitter. Maybe I should focus on the actual skating part now.

Filmed and edited by: Davis Torgerson
Additional filming by: Tim Fulton, Mikey Taylor, Chris Thiessen, Matt Bublitz and Jackson Casey
Graphics and animations by: Josh Manoles
Share this with your hip dad on Facebook
Report this as inappropriate on Instagram