JACOPO CAROZZI ON COMING UP IN ITALY 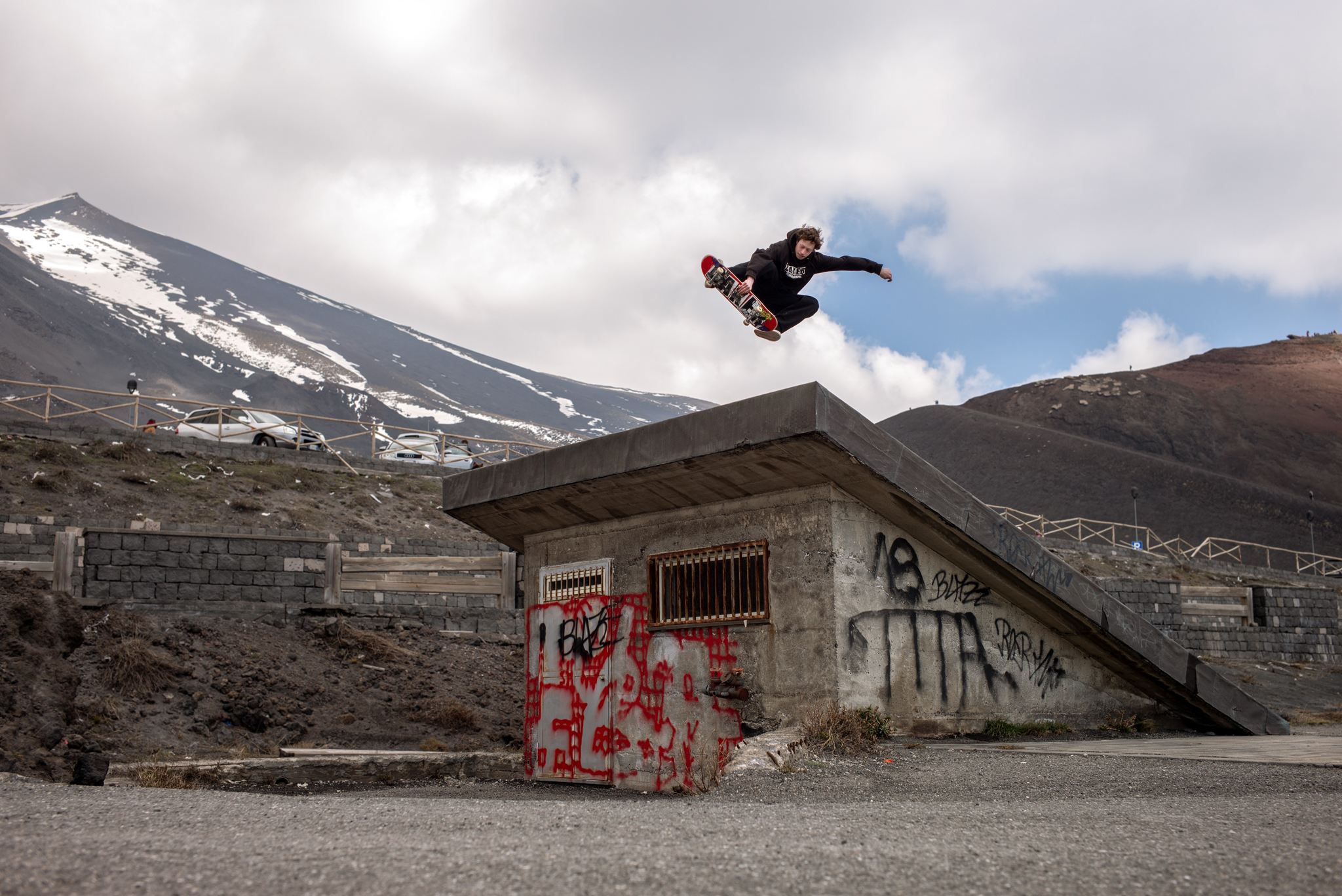 To the graying crowd, Luigi Giovanni Iannucci will always be their one and only Italian—or technically Italian-American—skateboarder. But for the less stubborn, a new fully Italian favorite has finally reached the global (i.e. U.S.-centric) stage.

Despite riding for Nike SB for almost a decade, Jacopo Carozzi is the first Italian-born skateboarder I’ve seen riding for a board brand as big as Baker and getting global coverage. So I called him up to see what he thinks about Americans’ continued stranglehold of the skate industry, and why a country with as glorious a spot as the Milano train station isn’t producing more pros.

Why do you think more Italian skateboarders haven’t made it big in skating or at least in the U.S.?
They’re more just going to stay in Italy and they like what they got. They don’t care about stepping up or anything. It’s not like I had something else in my mind compared to the other people. I was just skating. Maybe the other guys were more lazy about it or something.

Growing up were there older Italian skaters you looked up to?
There are a couple dudes that I’ve been looking up to since I was young. Giorgio Zattoni, he used to skate for Powell Peralta. He’s a really OG vert skater. Daniel Cardone. So I would say just a couple of names that actually went and traveled the world. That’s probably what made the difference for those guys. They went skating somewhere else. Not many people in Italy would travel the world to skate.

“If someone is good at skating then why do they have to make it to the States to make their dream come true?”

Do you think it has to do with the theory that U.S. skate brands don’t want to promote riders whose names are difficult to pronounce?
[laughs] That could be true. But it doesn’t matter what kind of name they have. If someone is good at skating then why do they have to make it to the States to make their dream come true?

Why do you think European skate scenes are finally being recognized more in bigger skate publications?
I would say that European skateboarding and spots look different. Europe is beautiful. Seeing the difference between France or Italy, spot-wise, it’s nice. You can feel it. But in the States, I feel like you can’t tell the difference between a North Carolina spot and a California spot. You can’t look at a spot and say where it is unless you know it. So that’s what’s good about Europe is you can tell that it’s architecturally different. I would say even just good ground could make a spot. Like just a flatground VX line on good ground that’s full of color. 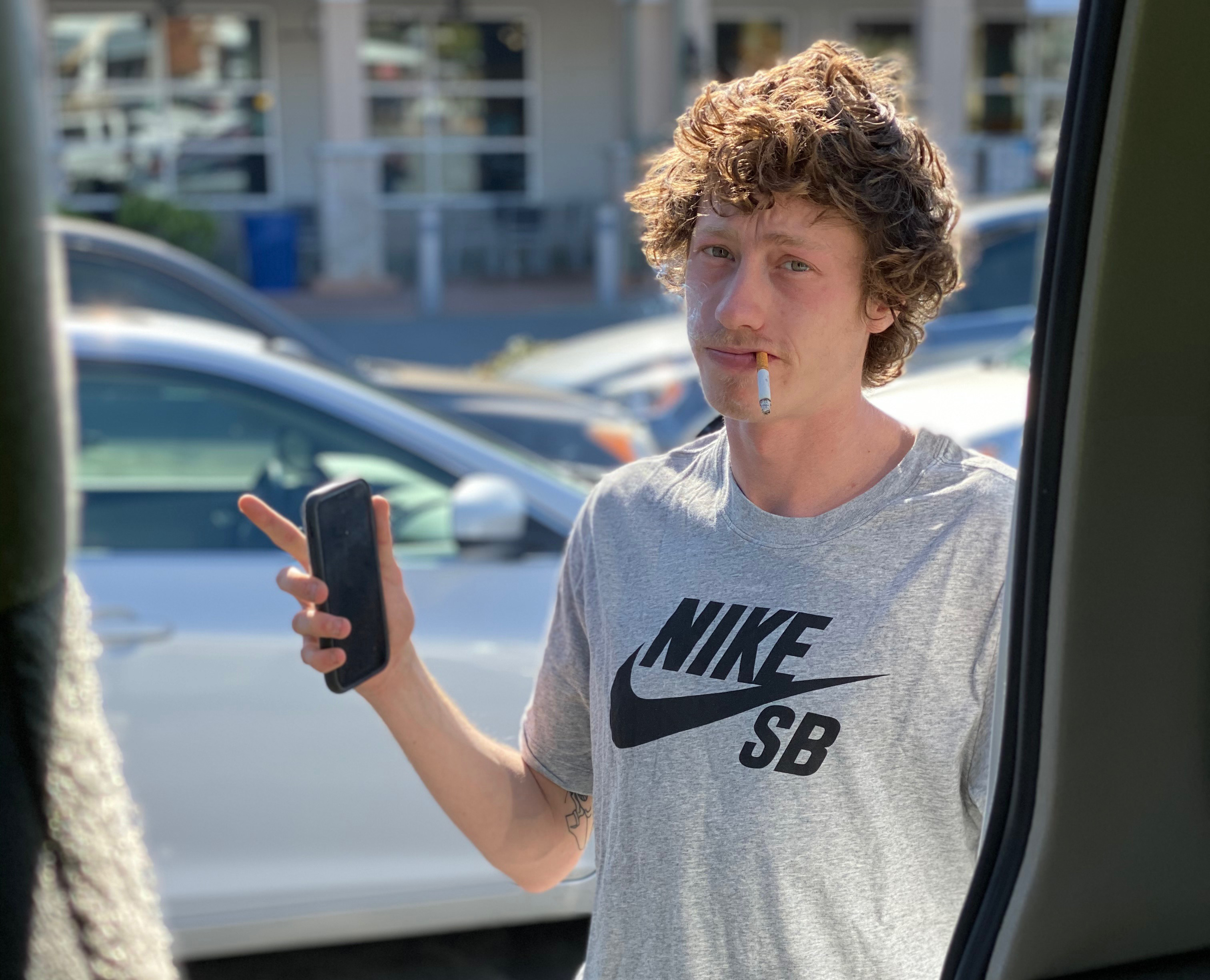 Have you ever had Taco Bell?
Oh my god. I got food poisoning there once actually. I don’t even know what I had from Taco Bell but I felt bad for five days or something. I got some weird tacos or whatever, and then instantly I felt bad in my stomach. That night I threw up and it kept going for four days.

What kind of school did you go to to learn English?
I never learned in school so it took me a long while to learn how to speak. I remember my first Nike trip was to Cyprus and I was super shy, I didn’t know what to say, and that was the trip I realized I just gotta try, and see how it works.

So you taught yourself English just from listening to other people talk?
Pretty much. I never tried to learn it from watching a movie because I was too lazy to think that’s gonna help me out.

Do you know any history behind the infamous train station spot in Milan?
So the train station has been skated for like 20 years now, probably longer. Basically Mussolini, back in the day, decided to make a train station because he wanted to try to hide one of the platforms that was going to Auschwitz. So basically, that’s the history of the train station.

That’s why it was built, as transport to a concentration camp?
Yeah. And it’s called Platform 21. Around 20 years ago they rebuilt it and made it more skateable and stuff. But the reason why it was built was because they were trying to hide one of the platforms.

Is it true that Andrew Reynolds sent someone to Italy to spy on you to get you on Baker.
That happened on a Nike trip in the States, and that was Elissa Steamer. We got on this trip, I became friends with Elissa, and Eric Koston was on that trip. Then one day Koston said something about me on his Instagram and I think Andrew replied something like, “I like this guy,” and he screenshotted it and put it in the group chat. After that one trip I hadn’t heard anything about Baker, then one day I was in Milan and I get a text from Andrew. So it popped up saying “maybe: Andrew Reynolds,” and the text was him pretty much saying, “Hey, it’s Andrew Reynolds, come to LA, come skate for Baker.”

I’ve been a big fan of Baker since I started skating so it was pretty much a dream come true. When I got that text I told my mom and she went crazy, like, “What the fuck? Andrew Reynolds just texted you?” It was a pretty nice thing, especially because I knew the story of Baker, no European riders. Ali [Boulala] was kind of in that crew but Andrew said he was never on the team. 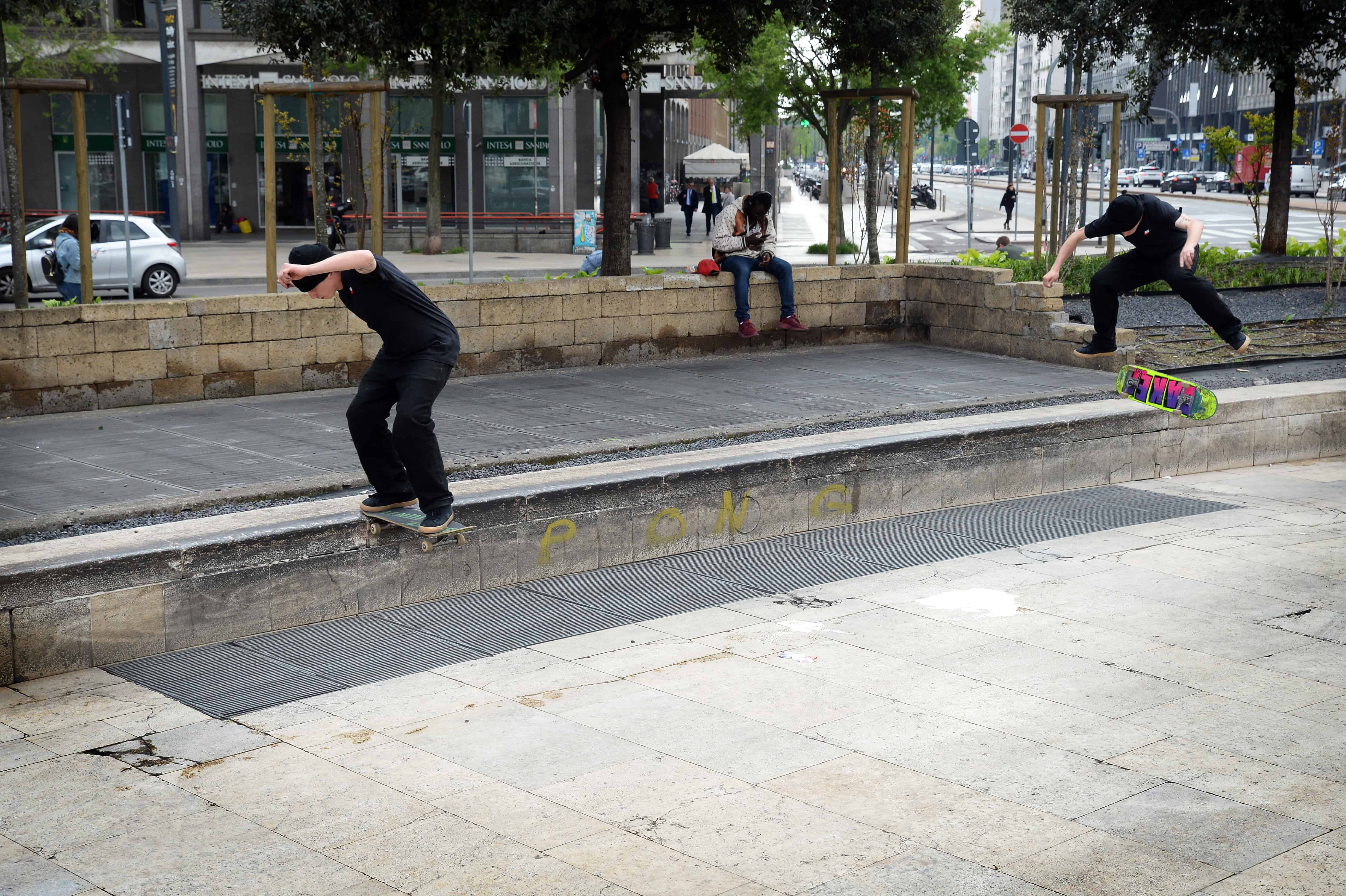 Do you feel pressure to match Baker’s historical level of partying?
Nah, not really. I’m not twelve years old anymore, I know what I wanna be in my life, so it’s not gonna be someone else to push me to do something I don’t want to do.

Do you not drink at all?
Nah, nah, I like to drink a lot, to be honest. But in the past few months I’ve been having heartburn so I’ve been taking it easy on drinking. I feel like I have heartburn almost every day, so I’m trying to see what makes the heartburn start.

Are any old school Italian farmers growing artisanal weed yet over there?
I would say for sure there’s families that used to do that and nowadays are doing something else. The thing with weed is that it’s never gonna be legalized in Italy because of the mafia. Because the mafia takes care of the black market businesses in Italy. If it’s drugs, then it’s mafia. The government is so corrupted here, so I don’t think it will ever be legalized.

Are there any skateboard brands backed by the mafia?
Not directly, because they won’t even know it. People will say, “That guy is in the mafia,” but it’s not like there’s direct contact.

But there could be a mafia-backed skateboard brand in Italy?
Oh yeah, for sure. The mafia is spread all over the world. There’s mafia in New York, so maybe not even an Italian brand. Maybe a New York brand.

I heard about an Australia trip you took when you were young. You guys were basically homeless the whole time, right?
Oh yeah, I went to Australia for seven months when I was 17. It was me and a couple other Italian homies. We would sleep in parks, playgrounds, whatever. Or ask people if they could help us. Just trying to be cheap overseas, see how it feels.

How did you figure out where to use the bathroom on that trip?
We didn’t usually have a bathroom. We were just going in nature pretty much.

You just pooped outside?
Yeah, you know, take a leaf and clean whatever you gotta clean.

Leaves are hard to use for toilet paper though. I’ve tried it.
Yeah, they are, actually. We were using shorts we didn’t use and just throw them away.

That’s rough, damn.
You ever heard of the P-Stone tactic? He would rip a piece of his sock, clean his ass, and then throw it away.

How many times can you do that with one sock? Two or three times?
For sure. Probably like four. 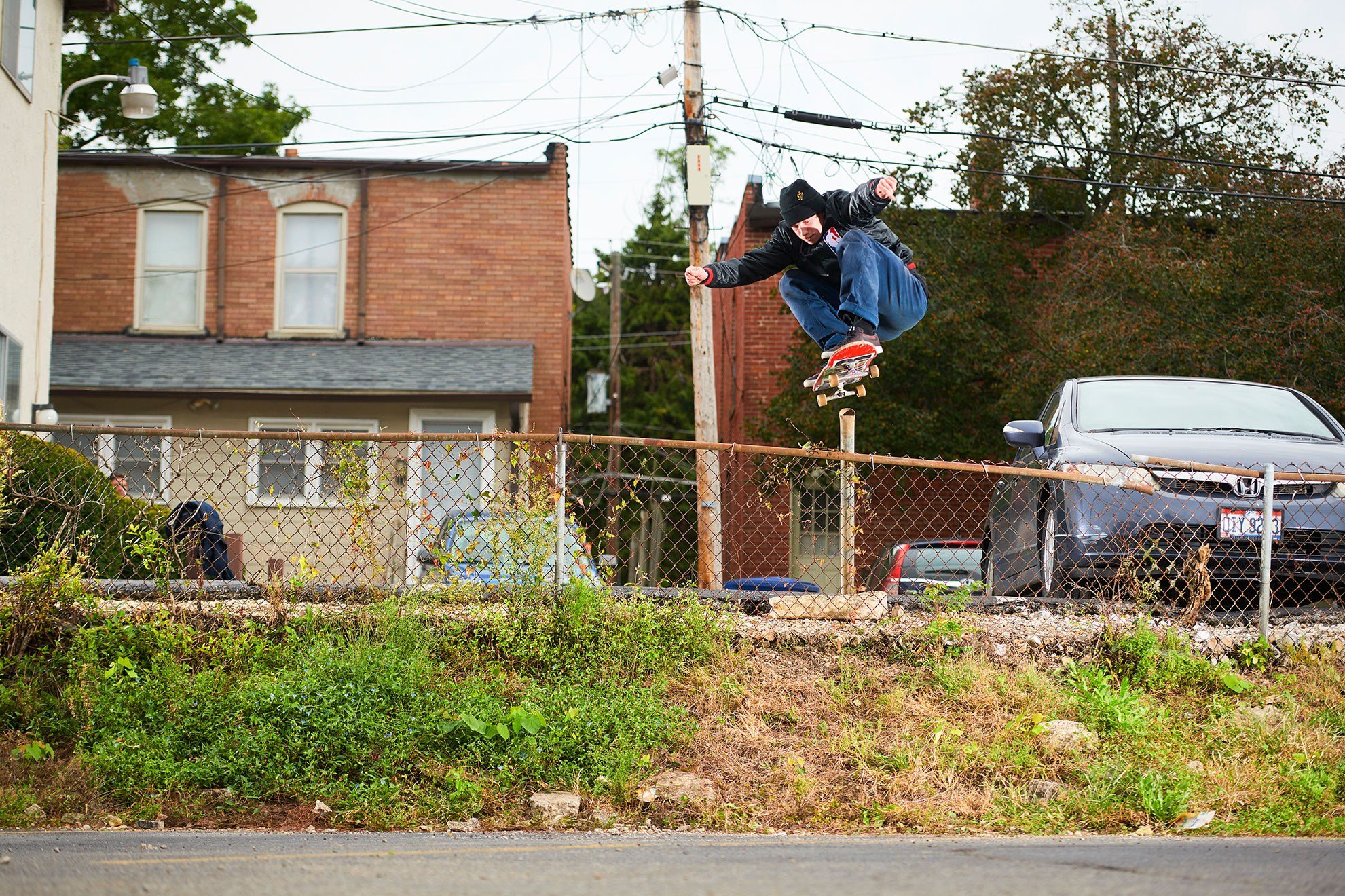 What’s the most valuable thing you learned from traveling with P-Stone?
As long as we were together, there was nothing we had to worry about, which is what he always used to tell us every day. Sometimes it could get rough. You’re traveling with P-Stone, and he drinks a lot, but most of the time being together was the first thing. Nothing else mattered.

He was so special, it’s hard to say one thing that he taught me. There were so many things. Cooking, for example. Cooking wherever we found ourselves, it doesn’t matter if it rains, if it’s windy, we’ll make it, the fire would spark. That was his mood every day. Don’t worry about it, we got it.

“As long as we were together, there was nothing we had to worry about, which is what he always used to tell us every day.”

I know you also used to travel with Chet Childress. Do you have any favorite memories from hanging out with him?
One time we were traveling to Innsbruck, which is in Austria, and we were bringing a big-ass bottle of red wine. By the time we made it to Innsbruck, Chet was so drunk. We stopped at the gas station and he pulled down his pants and started walking around. Once we made it to Innsbruck, he just passed out in the bathtub. Everyone had to go take a piss and see Chet like dead in the bath, fully naked and shit. [laughs]

Was Chet typically naked on trips?
[laughs] Actually every time he was doing art shows and stuff he would get a picture naked with someone. Just pull down his pants and take a picture with someone.

Did this ever bum people out that he was always getting drunk and pulling his dick out?
Nah, not really. Everyone took it in a good way, you know what I mean? It’s Chet so you just gotta be patient with him I guess.

Did you ever get made fun of for having a large mouth?
Yeah, but I always made fun of it too. One of the dudes that would make fun of me the most was Dustin [Dollin]. When he first saw me he was like, “Damn, you got a bigger mouth than I thought.” I was like, “Yeah, fuck you Dustin.” At one point I heard a girl say it’s kinda cool, so if a girl likes it, I don’t care what a boy says.

Does having a large mouth make kissing better or something?
I don’t know to be honest. Maybe.

I’m just curious why else would a woman say it’s better to have a large mouth.
Nah, they didn’t say it was better, they said it’s kinda cute.

Do you think you could you eat an In-N-Out cheeseburger in one bite?
Definitely not.

What about in two bites?
Probably two bites, yeah.