A SKATE VID SHOT THROUGH A VX1000 VIEWFINDER?

With an emphasis on style and purity over super technical tricks or bangers, OPEN skateboards promo video isn’t like any skate clip I’ve ever seen. Directed by Colin Read of Mandible Claw fame, the video is shot entirely from the perspective of looking through the lens of a VX1000 camera- time code and battery meter included. Not only is this entertaining on a theoretical level, but the footage itself is warm and fuzzy, bringing out certain colors and a rush of memories to anyone that has ever used an analog camera. To get the inside scoop, I hit up Colin to discuss where the promo idea came from, how he got involved with OPEN and his obsession with the Japanese.

What was the technical process of making the video?
I filmed into the viewfinder of a VX1000 camera, with a HD camera.
It started by filming the viewfinder with an iPhone, as a way to “capture” the footage at the spot for people to watch. This way everyone could see the clip at once, instead of sweaty faces in the camera or rewinding multiple times to show people and fucking up your heads. My friend Bill Pierce showed me the trick. The first person to do this, the originator, is my friend Evan Walsh, another NYC filmer.

Ever since Bill showed it to me I wanted to make a video out of it. The timecode, the visible pixels in the screen, it captured the feeling of filming with an analog camera, which is nearing its extinction.

What is Open skateboards?
OPEN is a skateboard company based in New York City and Japan. Two guys run it: Trevor in New York and Ian in Tokyo. The idea is pretty much “open,” not tying itself too closely to any one image or idea, leaving itself open to change and evolution. I’m friends with the whole team, and a few of them are having parts in my full-length video that’s coming out soon.

What’s with your obsession with the Japanese?
I’m not obsessed! I am really into their style of skating and thought process behind it though. For one, the scene is done right – it’s small, local companies built around their region. People support their local brands. I think that in America, big brands are kind of due to die off. Go weird, go local, go homie brand.

And the way they skate. They just do what comes to them. Nobody gives a shit about hammertime tricks. Skate the spot, find what’s unique about it and exploit it. 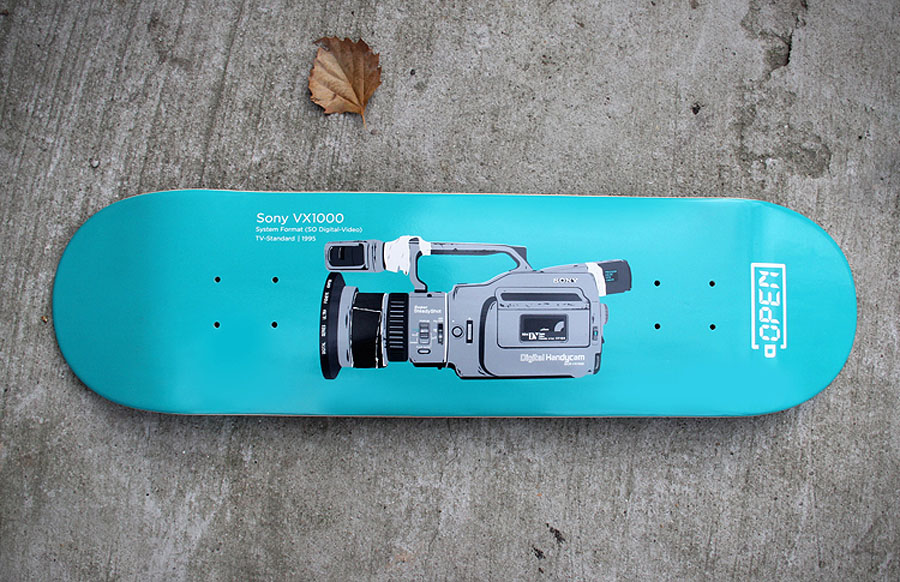 Don’t you think that if the art direction for OPEN is indeed.. open, doesn’t that make it harder to “brand” or give an identity?
Haha, that is a really good point. But I think there’s a guiding hand behind it that’ll show through. I actually think it’s kind of cool that the owners don’t want to nail it down in any one territory. It’s more fun that way. You see a lot of companies that make the same board over and over, the same video over and over. This way it’ll stay fresh, fun to work with.

You said, “in America big brands are kind of due to die off.” Why do you think that is?
It’s just hard to relate to them. A supergroup of skaters…they’re put together like a boy band. Billy’s on the team because he can actually sing, Timmy’s on because of his charm with the ladies…Joey’s on because he can skate huge rails. You know what I mean? For the most part, these people don’t skate together.

Small brands, with people who skate together, who represent an area or joined mindset. That’s how it should be. I hope we’re at a turning point. Skating has grown so much, it’s where it was in the 80s, before the big mass extinction. You know what Jason Jessee said. I want it to die.

”Nobody gives a shit about hammertime tricks. Skate the spot, find what’s unique about it and exploit it.”

What Japanese vids would you recommend to people?
Takahiro Morita is king. Shinpei Ueno, Shingo Ogura, all the TBPR filming is done amazing. I can’t wait to see the new Strush video. I loved the Color Communications video.

With HD being the standard these days, do you think you will be making the switch soon?
Personally, I’m not “against” the switch to HD. But nothing else has come along yet that I like as much as the VX1000. My main problem with filming skateboarding in HD is the aspect ratio. In the 16:9 format, when you film fisheye, there’s way too much dead space on either side of the skater. Lines look slower, tricks are more predictable–you can see the spot for a long time before the skater gets to it, it’s less surprising. I guess it’s more realistic, maybe, but it’s not as exciting. You can’t get enough distortion in the lenses, you can’t get as close to the action. We’re actually experimenting with some camera/lens setups that people haven’t done before. Trying to overcome these problems. But in the meantime, I just bought another VX last week. I have no plans to switch anytime soon.