PSYCHOANALYZING YOU AND YOUR SKATEBOARD 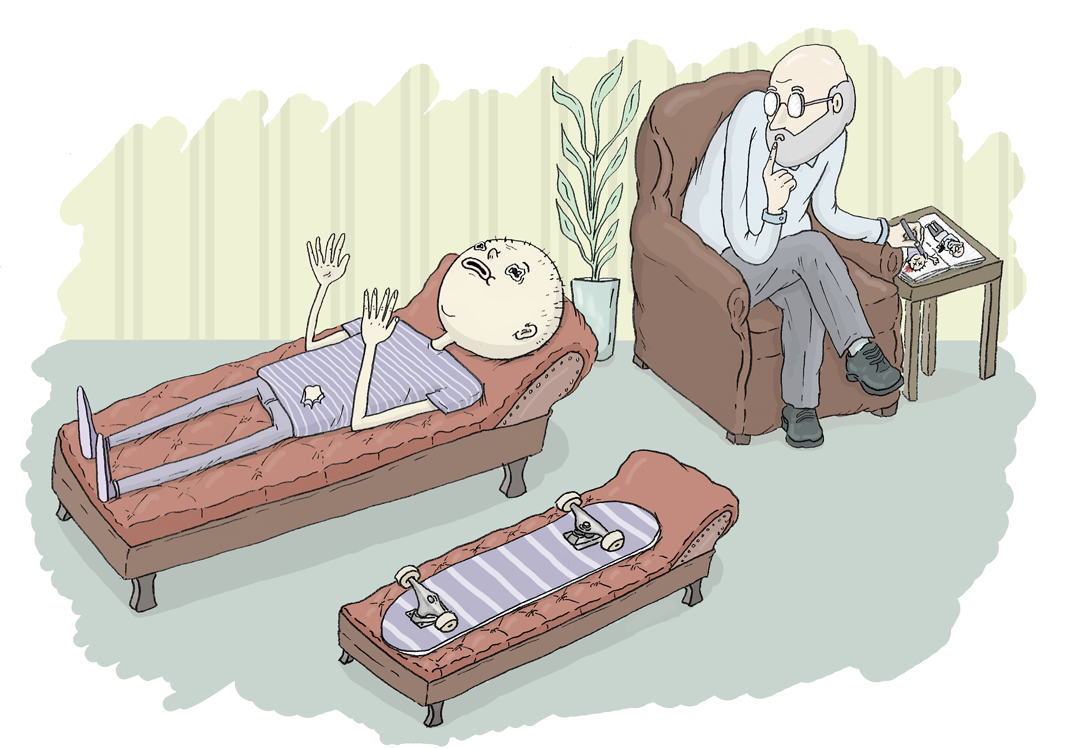 Though psychoanalysis has fallen into disgrace in the public eye, I’ve found that it can be a useful lens for thinking about skateboarding. Our common habits, our stair-top rituals and rage directed toward toys, can be better understood with some help from ol’ Freud. A lot of his theories are offensive and blasphemous, and have been roundly rejected by modern thinkers, but it is important to remember that psychoanalysis is not a science and that it does not offer the same sort of truths that sciences do. I see it as a way of thinking about things, a sort of useful frame for stuff like nail biting habits, strained friendships, and Andrew Reynolds’s “madness.” Before applying this lens to skateboarding, it is important to get a handle on its core ideas.

Freud thought of our consciousness as having three parts: the id, the ego, and the super-ego. These parts can be understood with the following metaphor, which misses some details, but gives a broad enough sketch to move into skating:

Picture yourself in between two people – on your left is a caveman, pawing for food and grunting in some sexual way, and on the right is a policeman spouting rules and moral guidelines. Both parties are tugging on you at all times, and it is your task to mediate between them and not fall over.

”Picture yourself in between two people – on your left is a caveman, pawing for food and grunting in some sexual way, and on the right is a policeman spouting rules and moral guidelines.

In this picture, the caveman is the id. The id is composed of your most primal desires – the desire to have sex, to be violent, to eat, to be held etc. – which flare up all the time and nag at our thinking. We are born with the id; it is our animal side that remains with us forever. The policeman is the super-ego, which represents the influence of your environment and its moral rules – to not steal, to go to school, to be kind to old people, etc. According to Melanie Klein, a leading Freudian psychoanalyst, we are not born with a super-ego. Instead, we create super-egos by living in the world and picking up rules from around us.

You, standing in between these two parties, are the ego, which will sometimes lean toward one force or the other. The id and the super-ego have the power to topple you if not properly counter-balanced. In Klein’s thinking, the super-ego grows from memories of people and things, and it tortures us whenever we’re not living up to their expectations. 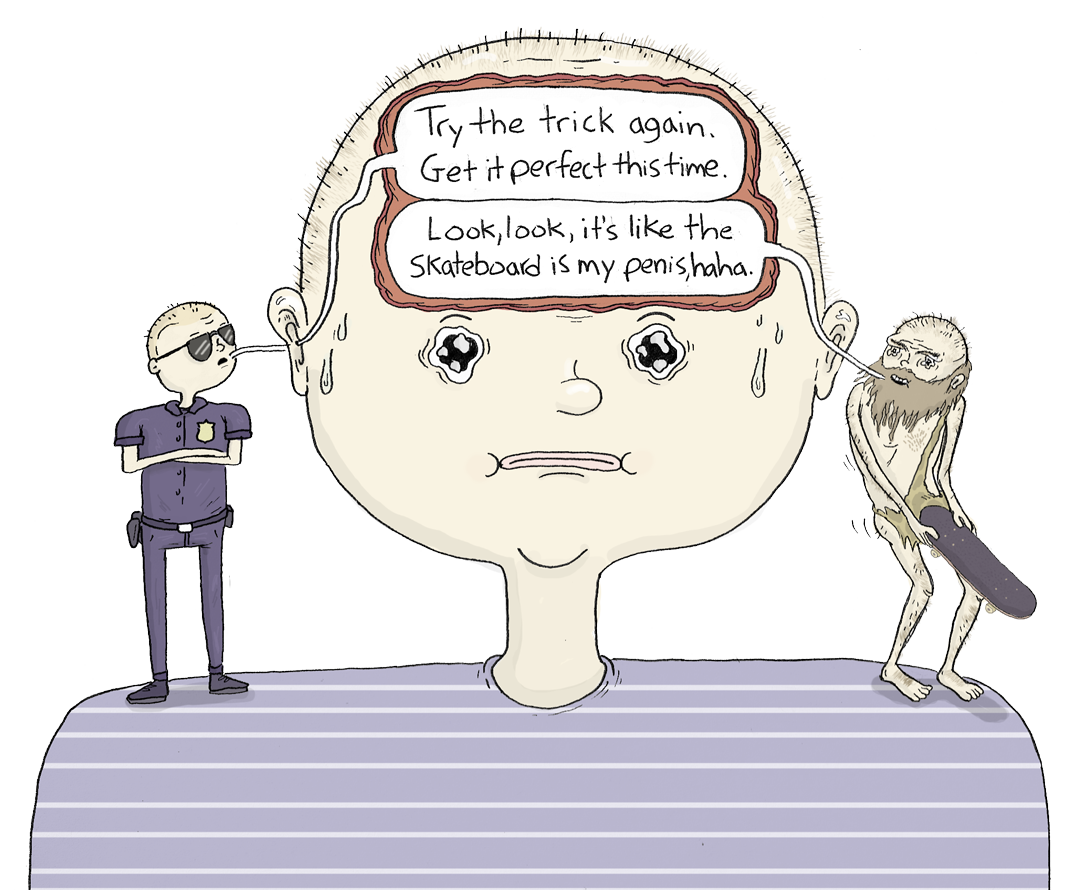 So, when we say our footage sucks, we are really saying it sucks when compared next to Gonz’s footage, Carroll’s, your favorite local, and some subconscious soup of all the other skateboarders you admire. This skater super-ego can goad us on to skate better, or – when we are failing to live up to its standards – can make us feel inadequate. It punishes the ego when things go wrong.

When the ego is under attack, Freud claims that we try to defend it using a variety of defense methods. One of these methods is called projection, a process in which we act as if the problems within us are actually coming from an outside source. To resolve that problem, we can attack that outside source and thus trick ourselves into thinking we’ve solved an internal problem.

In skateboarding, projection seems to be at work whenever we focus a board. It’s never the skateboard’s fault that you’ve suddenly become furious, and are tortured by the strange standards you’ve installed in yourself. But sometimes we treat this object like it is the source of our internal problems: we project the role of tormentor away from our selves and onto boards.

In this way, we can conveniently eliminate our internal problems by stomping a skateboard to pieces. Every time we smash our skateboards, we are convincing ourselves that these little inanimate toys caused us emotional pain (as opposed to the truth, which is that you created that emotional pain). The skateboard becomes a convenient scapegoat for tensions built up within us.

One other, rarer coping mechanism in skateboarding is masochism, or getting really hurt and somehow feeling better because of it. Freud thought that people liked being hurt because their physical pain provided a convenient distraction from the furious mental tension built up inside of them. He noticed how war-time trauma victims often suffered less mental distress if they were injured, and suffered more if they got away scot free. He theorized that getting an injury helped people think that the cause of their pain came from outside, from a wound to the body, rather than the mental pain of having gone through war and participated in death.

Physical pain is easy to understand, and in the end, much easier to resolve (by icing and resting etc.) than mental pain accumulated over the course of a hard life. A gnarly fall is a lot easier to get over than a gnarly childhood.

Then there is the problem of skateboarding as a pursuit. Why do we try to learn new tricks? Why does landing something give us pleasure? My theory is, honestly, that the learning process in skateboarding helps us feel like infants again, infants that are just learning to walk.

One of the primary pleasures in skateboarding, and one of the primary pleasures of being an infant, is the feeling of finally having control of our bodies, of having overcome some divide between our mind’s desires and our body’s capabilities. Landing a trick, for me at least, is marked by the feeling that my body “just worked.” Babies are one of the only other groups that experiences intense joy from simply having the body match up with the wishes of the mind.

There is a very primal id-like joy in simply having the body move the way our minds want it too. As skateboarders, we get to prolong the rare joy of babies well into our forties and fifties, so long as we keep skating and trying to learn new tricks.

But there is one other category of pleasure in skateboarding, and this is the one I have the most trouble understanding. I have often wondered: Why do we all strive to have good style? Beyond doing tricks at all, why do we want to do tricks well, to dress well, and to look good on camera? Why do we strive to be beautiful? It’s not just about getting the body to match up with the mind; it’s about getting the body (which is subject to the id’s animalistic forces), to match up with the mind’s standards of beauty (which are stored in the skateboard super-ego). 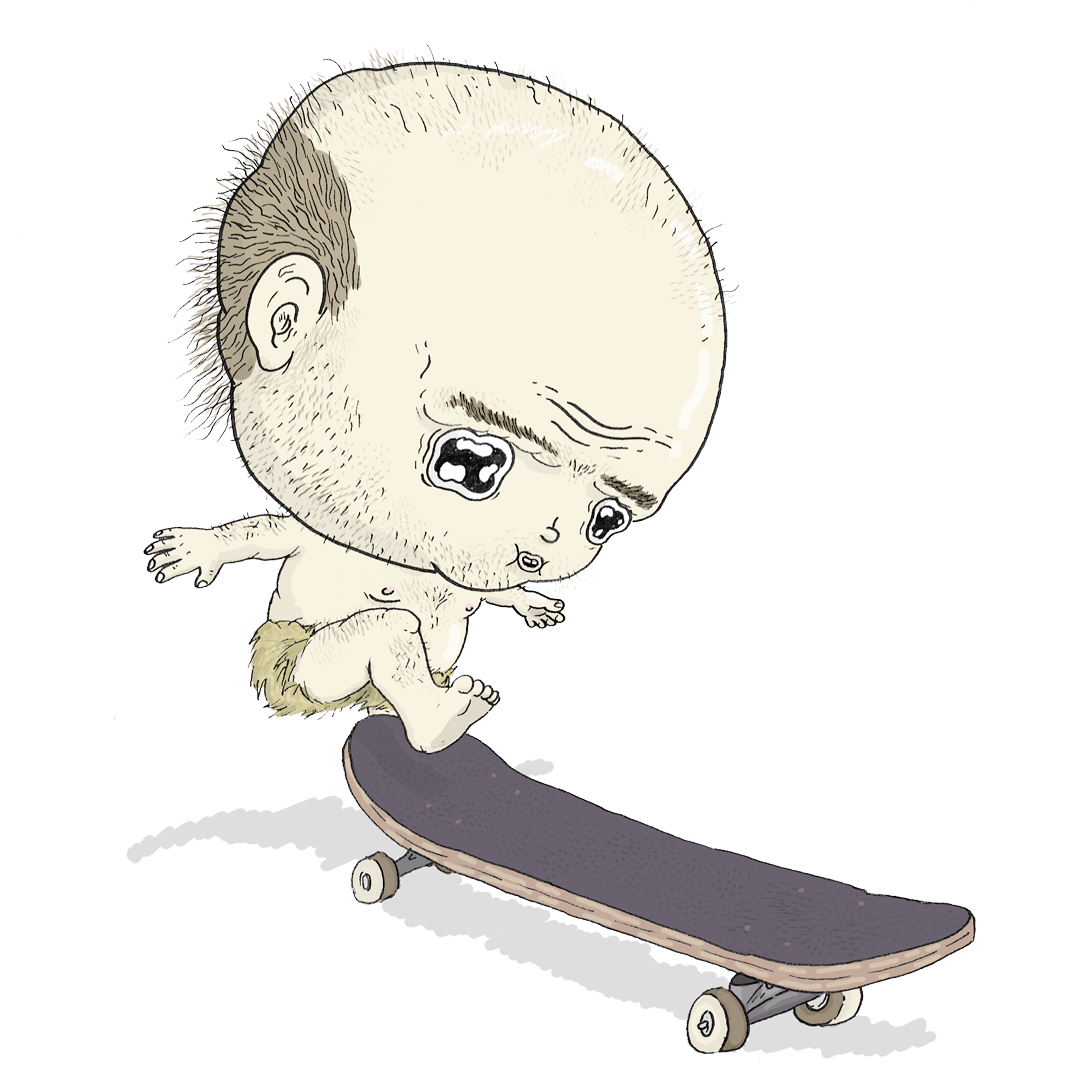 Maybe it is because, when we have good style, we are pleasing both the id and super-ego. Having good style demonstrates that you have satisfied the desire of the id – which is simply to land tricks, to be in control – and the desires of the super-ego – to skate like the very greatest skaters, to match or exceed their standards of beauty. In that original metaphor, we can picture you, the ego, listening to the caveman saying “land the trick, feed my need for bodily control!” And, on the other side, the policeman, saying “be as beautiful as the skate world wants you to be.” And replying to both parties, “Yes, I can do that.”

A skater with good style has remained standing between the two forces tugging on him, threatening to topple him. The id-skater strives for control, and probably pushes themselves down bigger and scarier obstacles or to more technologically demanding tricks – to raise the challenges of control and the resultant reward. The super-ego skater strives only for pleasing body motions, and does not care as much about actually landing tricks, or thrilling the id.

Having good style might mean satisfying the caveman/baby and the policeman, being brutal and cerebral, low-down and high-up, and also, probably, embodying some Freudian sex things (e.g. skateboard as phallic symbol) that I don’t need to go into.