KYLE NICHOLSON DESERVES MORE COVERAGE SO WE INTERVIEWED HIM 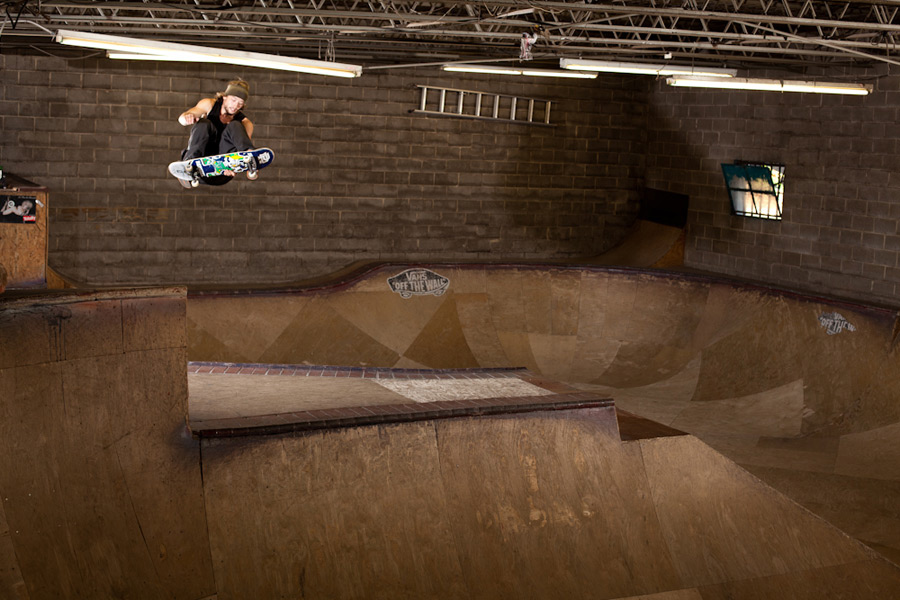 Kyle Nicholson is one of the best skateboarders on the planet earth right now, but sadly, many people don’t know it. In terms of skateboard ability, I think he has the potential to be a household name like a Westgate or Wair but because he doesn’t film too often, is still in Philly and doesn’t have a big sponsor to market him as the product he could be, he’s forgotten – silently grouped among all the other “underrated skaters” we love to discuss. If the “drunken redneck” just spent a little bit more time out west, put out more footage and connected with the right people, the industry would be fighting over him right now. Until then, Kyle is a winning lotto ticket that just isn’t being claimed.

Have you been approached by other sponsors while you’ve been on Selfish?
No.

Do you think you are underrated or haven’t gotten the attention you deserve for your skateboarding?
I don’t really look at it that way. I’m happy with where I’m at, Selfish is a little different and all I wanna do is to be able to eat and skate and it’s providing me with that. I don’t give a fuck, I could be riding for Nash if they gave me a couple of dollars. I love Jereme, I like the company and like what they’re doing with it. It’s a little different than the rest of the industry, I just kinda do my own thing.

Would you consider moving out to California if you got opportunities to ride for other brands?
Nah, I wanna stay east coast. I mean I’ll go visit but I could only ever handle so much of California. It’s cool to visit but it’s a whole other world over there. I need the seasons in my life, I need the change of scenery, people are different there. I mean if it came down to it and if that’s what it takes, that’s what it takes, but I could never see myself leaving Philly or Pennsylvania in general. 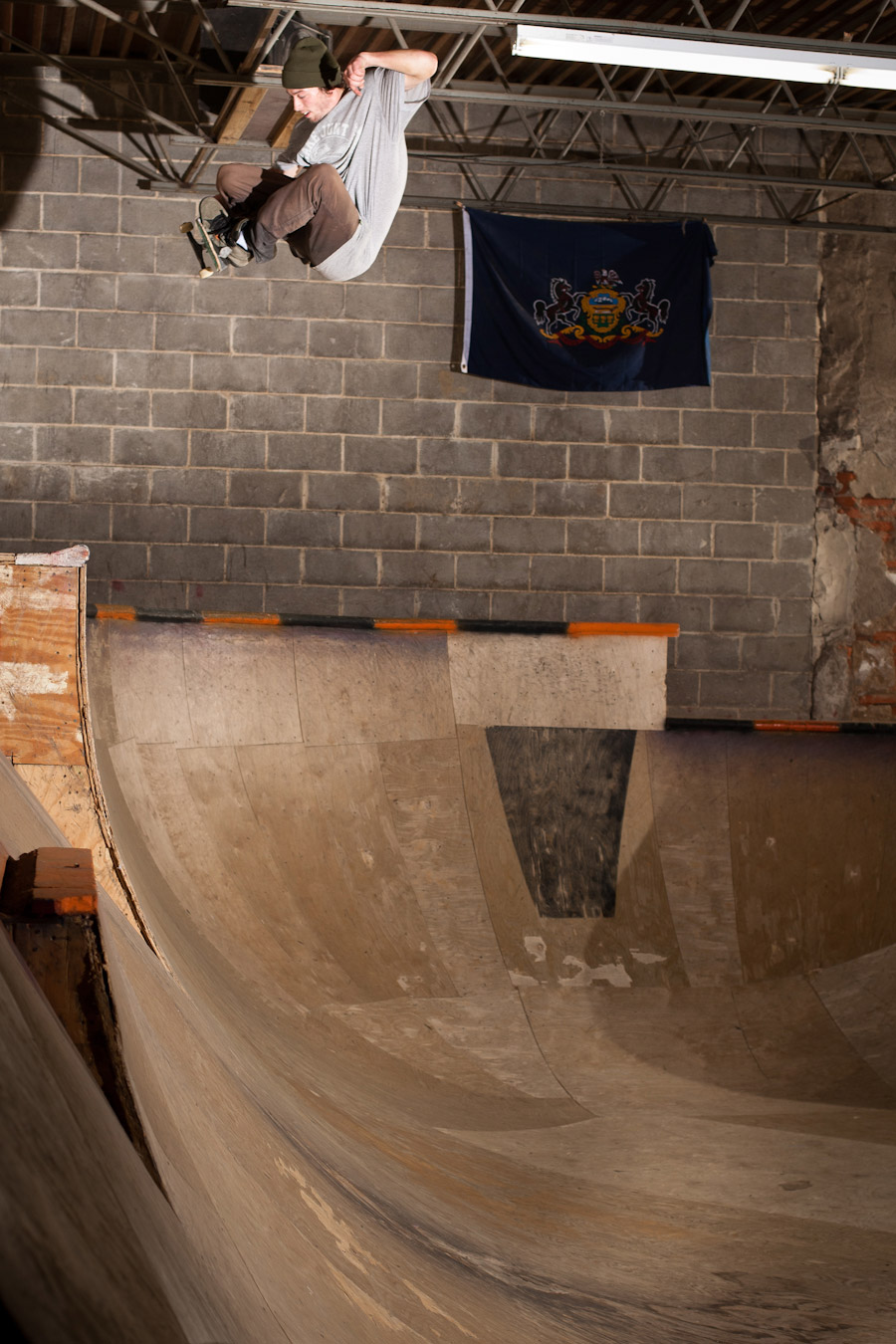 Would you ever take something like an energy drink sponsor?
If I got like a Mountain Dew sponsor, I would get that shit tattooed on my forehead.

You don’t give a shit?
Nah, hell no. A lot of people say that stuff is like “going corporate” or “selling out” but at the end of the day if you can take care of yourself and make a shit ton of money before you’re 30 years old, why the fuck not? I’m not mad at anyone that does that. Shit it’s cool to keep it real or be core or whatever but it also would be nice to be driving a Benz around and buy your girl some diamond earrings you know what I mean?

Doesn’t that conflict with your point before about you just want enough to skate and eat and live?
I mean I’m happy with it, I’m comfortable living a certain way but if someone offers money on the table, I’ll take it. I’m not scared of money, but I can live without it.

”If I got like a Mountain Dew sponsor, I would get that shit tattooed on my forehead.”

Have you ever been with a black chick before?
Yeah I have but I don’t know if it counts it was actually a hooker. I got one in Amsterdam.

How do you pick one out? Is it awkward?
Well you go to the redlight district, it’s a long canal and on both sides there’s big bars and clubs, live sex shows and stuff like that. Then there’s all these little side streets with windows, just streets with windows with chicks in them. There’s a street for thick girls, a street for black girls, skinny girls, you know what I mean? You just walk around, find your block and pick one out, and just walk in. Straight up transaction.

What’s it like inside? Is there a bouncer or a guy that stands there who makes sure there’s no funny business?
It’s just a small room, there’s a bed and you go in and ask for the prices and give her the money. I think there’s probably a back room that connects all the little front rooms with the windows. I’m sure there’s a dude behind there somewhere in case, they have been running it for a long time and I’m sure it’s all locked down.

What are some of your best side hustles for cash?
I mean, I’ve done a lot. I’ve been on my own since I was 15 and I never really had a real actual legitimate job. Craigslist is always good, I used to go in the free section, grab something free, like an old coffee table, finish it up, re-lacquer it or whatever and then just put it back up on Craigslist under the Philadelphia section and sell it for like $50. Little shit like that.

My buddy actually started tearing down barns, and refinishing the barn wood into like coffee tables and shit like that. There’s actually a lot of money in it. Like out in Reading, PA there’s a bunch of country, old barns that people don’t even want and they don’t realize they are potentially sitting on like 15 grand of wood. People spend a lot of money on old refurbished barn wood because they used to make them out of all the good shit, quality oak and cedar. It was untreated wood that you can’t really buy new nowadays, you can only get it out of these hundred year old barns. It’s shit like that.

I mean, it’s a lot of work, they were real nail happy back then so you gotta spend a lot of time pulling out these nails out of the beams, but it’s fun to fuck around with it. Good for a couple dollars on the side.

What could you sell it for?
My buddy sold his last table for $2100, this big burley 500 pound table he built for this guy, like something you would see in a medieval castle.

One of your friends also said you spent a day recycling cans so you could buy some beer once?
Yeah me and him actually went on a mission the other week and spent a couple hours getting cans and went to the bar, it was tight. 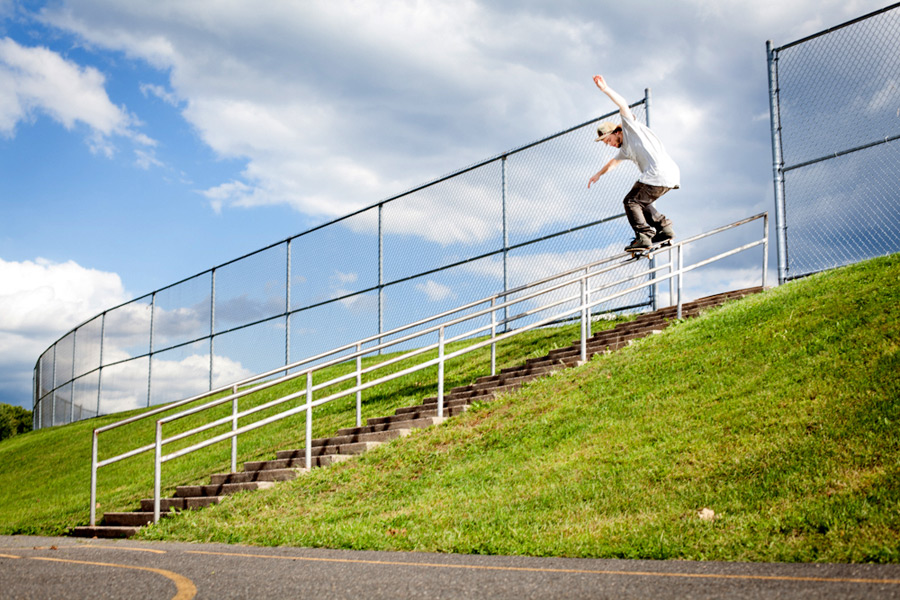 You used to get hooked up by Habitat before Selfish, what happened?
They were taking care of me for years, those dudes were awesome, great motherfuckers. Then [Brian] Wenning approached me about Selfish when he was still riding for it, said it was a good idea and said he’d put me fully on so I said fuck it.

Ironically he bailed though…
Yeah right? Then he told me I should bail on Selfish to to go to his company. Right when he quit he was trying to talk me into bailing too, but I like Jereme and trust his shit, and like the boards. I respect Wenning he’s a great dude, but I just had to stick with it and I’m glad I did.

What’s the biggest misconception about Jereme Rogers you think?
Jereme’s a very interesting dude to hang out with. I’m sure most people have misconceptions about Jereme, anybody that doesn’t really know him. The way he was putting himself out there in the beginning quitting skating and doing the rap thing, made people think that he was on drugs, kooked out but like, there’s a method to his madness. He’s a brilliant human being. He’s done pretty well with it – just did a video with Riff Raff now. He has been doing shows and shit. Just to see somebody go from having everything to choosing to have nothing and doing it all over again. Doing some shit that everyone told him that he couldn’t do. He just does it because he’s passionate about it, he’s just like fuck it, I might never make money off of rapping but I’m gonna keep doing it. I respect him for that.

Do people call you a redneck?
Recently I’ve been getting that, I guess because I chop down trees and shit, Jereme seems to think I’m a redneck, I’ll take it, whatever. It doesn’t bother me at all.

What’s your favorite beer?
Busch. All day, I mean I’ll drink it all, but yes, Busch. I’ll shower in that shit if I could. 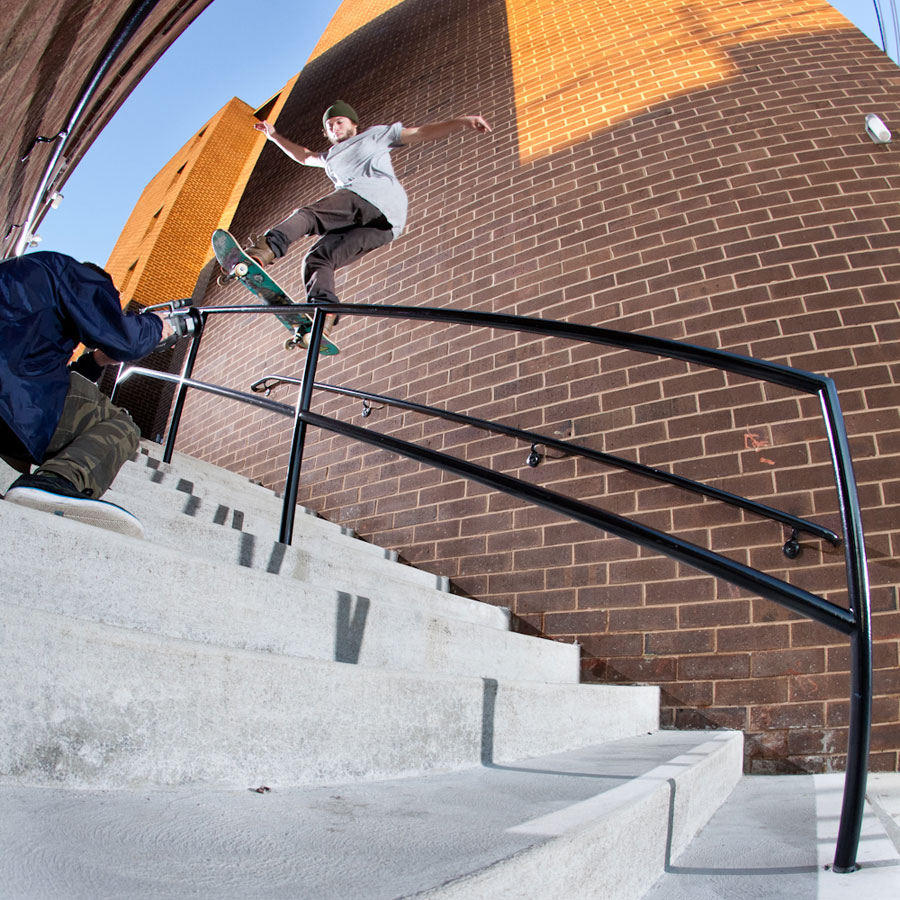 I was told you play a lot of dice.
Yeah I’ve had a pretty good season.

No way.
Yeah it was on an Axion trip and there was a big sales meeting going down, they bring all the reps in from all over the country and Mark Brandstetter [Axion Brand Manager] has a way of doing things so everything is always a party, always a good time. He had the bright idea of having stations so people could hang out with the Axion skaters and do different things. My booth was a beer bong station, people had to come race me in beerbong. Manny [Santiago] had a basketball hoop and [Mike] Maldonado had dice. So all the reps were playing dice and after I was done with the beer bongs I just went over there and cleaned house somehow. I did like 9 beer bongs, then somehow just walked away with over $1000. In the beginning it was just like a shit ton of $100 bills and then the owner of Circa came out and was throwing down like $1000 at a time, there was big money going around. The hand was hot. It was a good day. 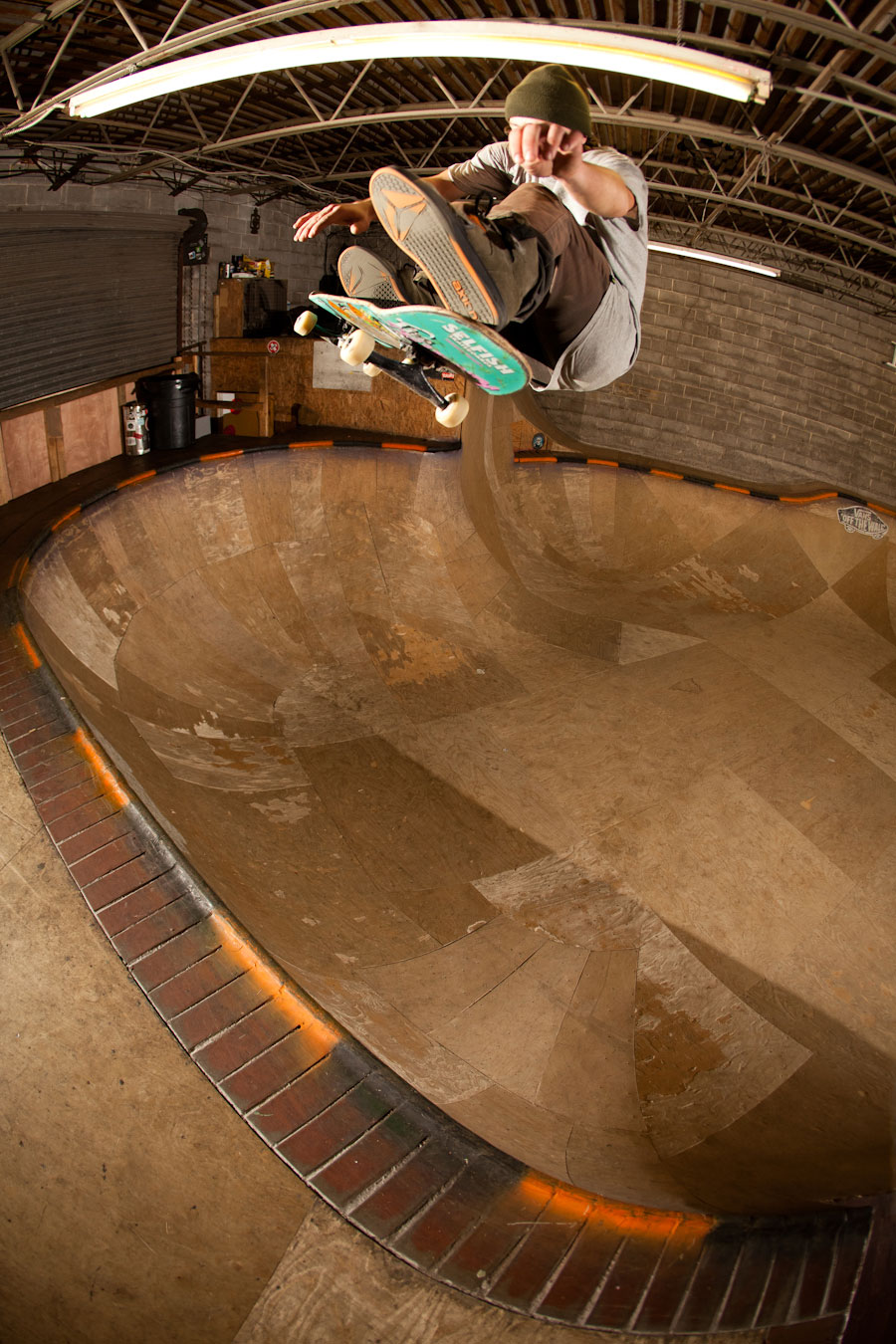 Is it true you’ve wore the same pair of pants everyday for a while now?
Yeah I got this real good pair of pants about a year ago. I was in Europe with my girl, and the last day in Barcelona I got this ill pair of camo pants, I wore them everyday for about 10 months. Every single day. Zara pants, quality shit. I couldn’t believe it, never had a pair last me that long. Mad stretch. I tried looking everywhere for them again, but couldn’t find them. I would have bought 10 pairs and wore them the rest of my life. I’m still on the search for a similar pair.

Back home in Philly, do you go to a lot of strip clubs?
Not too much anymore, this one we go to, the Ratchet Room, it’s in this sketchy alleyway in Center City. My buddy gets all these free passes so we just sneak in there, they have a salad buffet in the afternoons, get a caesar salad and see some tits and you’re set. It’s actually called the Gold Club, it’s real small, like the size of a garage but then there’s these booths you go in. It’s not the most quality but if you wanna get ratchet it’s the place to go.

Can you get more than a lapdance in it?
I’m pretty sure you can – most places in Philly you can. There’s a bunch of spots where you go in and it’s like $150 and you get a full massage, and then they just put a condom on you with their teeth and you bang’em. That’s their move. Philly’s good for that, you can pretty much get or do anything.

Words: James Lee
Photography: Luke Darigan
Special Thanks: JD Turner, Luke Darigan, Nick B, Kerry Getz
All sorts of crap over on our Facebook
Get brainwashed on Twitter