4 WAYS TO MAKE YOUR SPONSOR ME TAPE EVEN BETTER 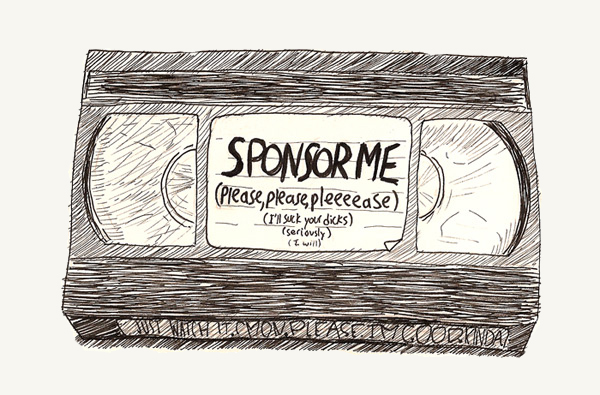 From that inaugural moment when you stepped on those seven plies and landed your first personal NBD, you’ve thought it: How can I use this thing to become rich and famous? Today with so many companies digging their heels into skateboarding and with the economy on the brink of being back to just beneath less than ok, your chance to shine has never been more within reach. Here are four easy steps to make sure your sponsor-me video stands out from the gobs of Youtube links team managers receive every single day.

1. Include Tons of Skatepark Footage

Nowadays, companies aren’t just looking for someone who can put out a banger video part in their emailer every month, they’re also in the market for someone who can score massive points in contests. The training ground, and often the playing field for contests is some variation of a skatepark. So along with the footage of you “murking handrails” in the streets, go ahead and send along 15 minutes of you at the skatepark. Include some single clips of your most difficult maneuvers, but also splice together some runs that are a little more basic. This will show your consistency and how well you can link together 1.5 minute runs and 7+ point Street League tricks.

2. Do Not Wear or Ride Product of the Company You Want to Ride For

If a company sees you for 3 minutes, busting your ass representing them as if you already ride for them, they are going to be absolutely terrified of losing a loyal customer. They aren’t going to want to give you something for free if you’re already paying for it. It’s the old, “why buy the cow when the sex is free idiom.” If companies see you ripping and already using their product, they’ve already won. The solution, of course, is to not ride any of their stuff and almost seem indifferent or ambivalent to them. Treat them like the hot girl you want to have sex with. Give them attention, but don’t buy them dinner until you’re getting something out of the deal for yourself.

3. Do NOT Seem Overeager

In the event that you do get a response from a team manager, you don’t want to come off overzealous or like an impassioned kook. Avoid this by taking advice from many classic male archetypes of popular american sitcoms and adhere to some sort of variation of the 7 day rule where you don’t return a phone call or email for at least a week, maybe even two. This will make the team manager think, “This kid is so busy killing it on the streets or thinking up our next hit T-shirt tagline that he doesn’t even have time to call me back to get a box!” Or, better yet, he might think that you’re in such high demand from other potential suitors that you’re just being smart and weighing your options. That will make the moment when you finally do reach out and call or email him back all the more rewarding.

4. Include a Post-Video Interview

Skateboarding is increasingly headed towards a more professional mindset. Watch any interview and note the diplomatic nature to which even the youngest amateur now adheres. They’re overtly polite, well-spoken, and the interviews almost seem rehearsed. You need to showcase that you not only rip at skating, but you can mouthbang the post and pre-game show with your dynamite on-camera persona. Give the team manager a taste of what kind of charisma you’re capable of by ending your sponsor-me tape with you interviewing yourself. Tell the camera a little bit about who you are, why you want to ride for the company, deeply personal facts about yourself, and definitely explain in painstaking detail how you started riding a skateboard and fell in love with it. That is always interesting.