When my friend Todd let me do my first board graphic for Consolidated Skateboards in 2004 I was stoked. Little did I know, as hard as it was to get the O.K. to design a board for free, it was even harder to keep that work going and actually get paid for it. Now in 2012, I’m feeling pretty good. I’ve made close to fifty boards and have worked for some of my favorite skate companies along with the ongoing activity page for The Skateboard Mag. I’ve pitched many many graphic ideas over the years, some of which I really liked but will never see the light of day. Here’s some of them that never made it, for better or worse:

1. Dan Murphy – Foundation – Smurphy
With this one I got ahead of myself! I’m friendly with Dan Murphy, so I asked him if he had any board ideas. He used to be called Smurf when he was little so I drew this up for him. I was so excited about it, I made a fully finished graphic that Foundation never ask for and wasn’t really into. But I knew that was a risk when I was drawing it, so I couldn’t be mad about this one. His dog, Indy as Azriel the cat wins though in my opinion.

2. Dustin Dollin – Baker – Dustin Muska, 2010
I actually fully finished this play on the iconic Muska board before we found out Girl had just done a similar Mike Mo Capaldi board. Damn you Mo! You now owe me a pair of glassysunhaters.

4. Don Nuge – Foundation – Nuge Zombie, 2007
The artists worry: to offer your ideas only to see the idea done by someone else. This happened to me. I made two mock ups with riders as zombies but they moved forward with a different artist. I came to find out that we both pitched the same idea at the same time and they went with him. Frustrating, but that guy did a great job on his series and was done better than mine would have been, most likely.

5. Lil Wayne 2012
THE polarizing issue in skating today. I don’t really give a shit, but thought it would make a funny board graphic.
Offered it to several companies, but sadly no takers…. 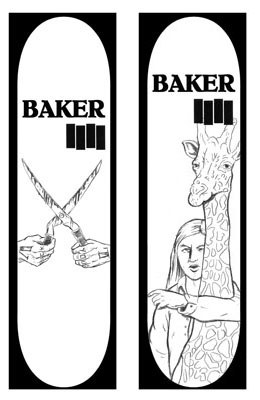 6. Kevin “Spanky” Long & Sammy Baca – Baker – Black Flag series, 2010
I did a Dustin Dollin board based off of a Black Flag album cover, and having never done a full deck series I figured I’d try to expand that idea for a full Flag series. The Sammy Baca art may have been a go, but doing the slip in cover with Spanky and a giraffe may have been a bad call. For the record Spanky, I know you don’t fuck giraffes.

7. Corey Duffel – Foundation – Duffel Calvin, 2009
Not the most original idea, but I thought it funny. Peeing on the Foundation company logo may not have been the best approach.
But I ended up using the Calvin idea for an R Kelly print years later.