EVERYTHING YOU WANTED TO KNOW ABOUT BRIAN WENNING’S NEW BRAND: LOCKDOWN SKATEBOARDS 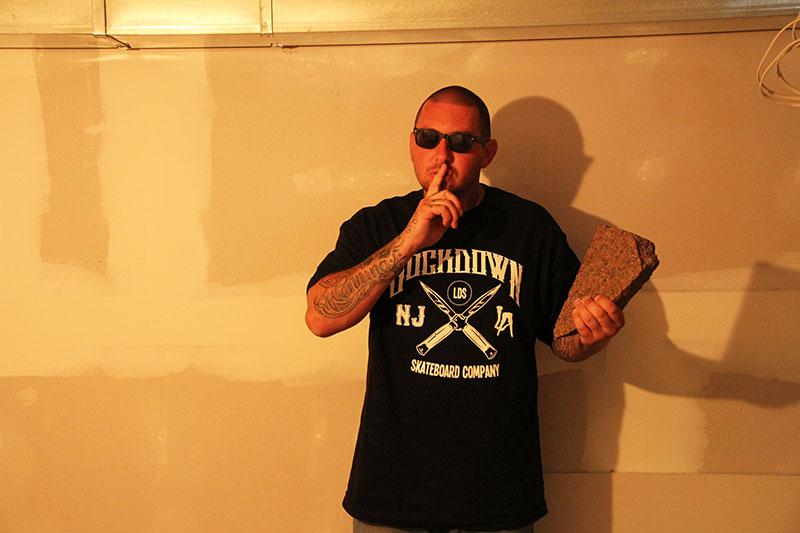 It isn’t just a rumor, Brian Wenning really started his own skateboard brand. The last couple of years have been insane but instead of lying about it, Brian came out and talked honestly about some of the problems he was dealing with: probation time, drugs and why things happened the way they have. On the flip side, without running into any of these obstacles, he wouldn’t have had time to think up his new company, Lockdown Skateboards. And now that he’s off probation and moving forward, Brian’s feeling like a new human being – And you better believe he’s going thru with his plan.

Why start a skateboard company in a recession?
Because when is this bullshit recession gonna end? And in a recession if you put in 14 hours of work or whatever I don’t think you are gonna waste your money buying a fucking Element board. There’s also good things about a recession, like there are so many good skaters right now that aren’t hooked up.

Why is it called Lockdown?
I had some over the top names and I was just thinking about how shitty some of these fucking company names are. After drinking some Budweisers at a bar in Jersey with my man Rich, we just came up with that. It’s like back in the day, if me or my friend did a trick 3 times in a row we’d be like, we got that shit on lockdown. You know? And the name could mean anything to anybody, it could go a few different ways.

Now that you have your own company, you getting that Selfish tattoo removed?
No, I got a big X over it. [Laughs] Nah I’m just gonna leave it dude, no lookin back…

I think you should get a big Lockdown logo over it.
Nah, I wouldnt go over it, it’s just too over the top, it’s too big.

Did you start your own brand cause you couldn’t get on any other brand?
Dude I wanted to do this back when I rode for Habitat, I was just too scared to pull the trigger back then. It ain’t like this shit doesn’t cost nothing. I could have easily just taken the money and done something else with it and been fine. Anybody starting a new company is taking a chance. I really have no problems just helping people out, never having a pro model again. I don’t give a fuck. 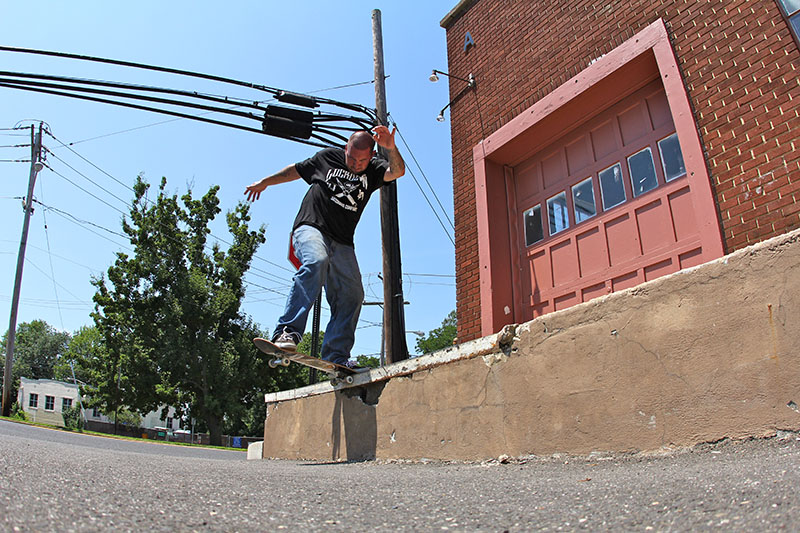 Why buy Lockdown decks?
I bought the best wood I could get. Chapman wood. No Chinese bullshit, just the USA wood. I spent extra money for the good shit. I know how people feel when they spend their hard earned money and the thing is complete garbage. We got sick graphics and it’s run by dudes that know what they are talking about, which is not the case for other companies.

What’s it like day to day now for Brian Wenning?
Now I’m amped cause I can finally leave this fucking state of New Jersey cause I was on probation for the last year and a half and couldn’t even risk getting a goddamn trespassing ticket skating a manual pad behind a K-mart or else I would have violated probation and gone to jail. I even had to skate with a helmet at my local skatepark. Whatever, I learned how to skate transition better because I couldn’t leave the state, couldn’t even skate a ledge or I would get like vandalism.

We haven’t seen any new photos or coverage of you at all in a long time. What have you been doing?
There was no reason for me to have any coverage. I really don’t care at all about coverage to tell ya the truth.

A couple times I tried to go on some trips to Canada and like I thought, I wasn’t allowed to enter the country. In Arizona I was accused of DUI and possession of a controlled substance, so customs ain’t trying to deal with my buffoonery. The traveling factor kinda bummed me out throughout those years because there was always the possibility that I was going to be detained. And in fact I was detained multiple times. Actually during the wacko times I got a chance to think and search for a way to mastermind my new company. 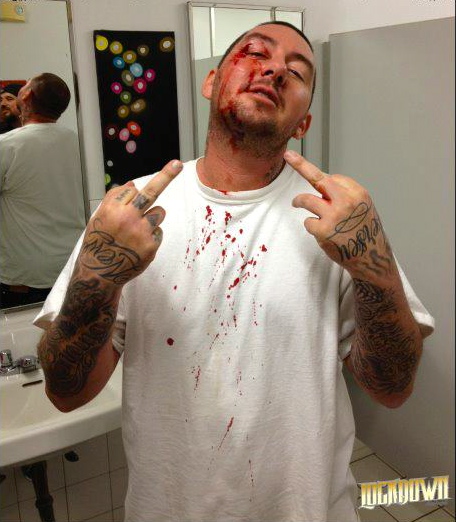 You told me before you got injured recently?
Oh god yeah I told you, I’ve been skating transition recently cause we built a mini ramp at my friends house. We went to upstate NY and I tried to switch pivot fakie on this 13 foot vert bowl with pool coping. I’m wearing like air force one’s, a hoodie, and a big Northface jacket. Of course I hang up on it, and fall straight to the bottom. Broke like 3 or 4 bones in my face, above my jaw, above and below my eyes. Got a full-blown concussion. I went to the ER, it was like a 2 hour drive. I still I can’t feel a few of my teeth and I couldn’t see for a little bit.

Are you ok now?
This was like in February. You would never notice unless I showed you my X-rays. I blacked out once I hit the ground. I remember getting up and laughing, blood everywhere, not knowing where I was. Immediately someone hands me a bottle of Smirnoff and I start pounding it, cause I had no idea what else to do but laugh. Right after I fell the owner of the skate park brings me in the office and he took out duct tape and crazy glue and starting pouring vodka down my throat.

He was putting crazy glue in the wounds?
Yeah like closing them up, like it was a butterfly bandage. I’m fine now, I just have a little scar above my eye that’s it. I got about 30 stitches there but you cant even see it anymore. 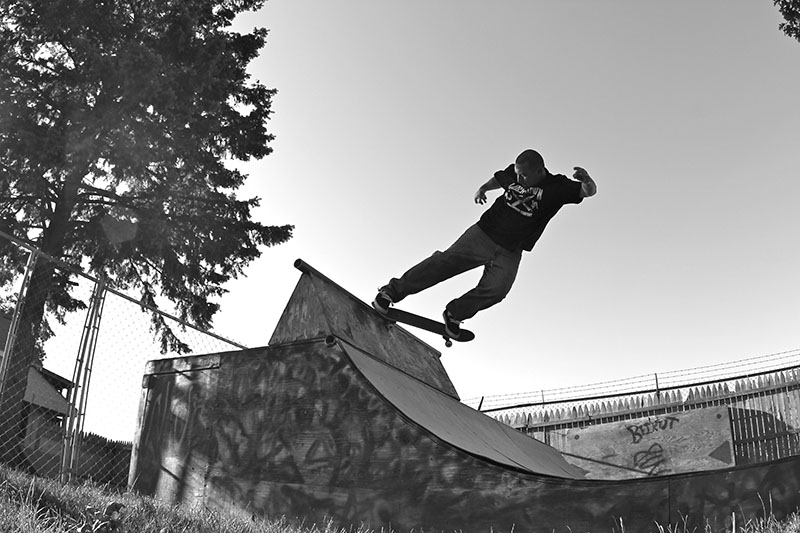 A while back you were locked up in a psych ward yeah?
Yeah, two years ago after like a year long bender. When keepin it movin goes wrong. I met some good humans in there tho…

How much were you drinking?
I drink here and there man, the drinking wasn’t the problem. It was other things that you mix up with it.

What were the other things?
Dude I was pretty fucked up on Xanax for a few years. Believe or not I dealt with kicking that bullshit on my own and it wasn’t a good time in my life. Since I’m not getting high any more I’m not negative anymore. When I was fucking wacked out of my mind, I would start thinking of things and it would make me hate people. For the amount that I was doing, to feel OK again it took me about 3 months and 3 weeks to feel slightly normal. But my anxiety is still fucked.

When you get there what happens?
When I got there and woke up, I felt like I was gonna die after like a year long bender but this security guard helped me out. He’s like, “lemmie give you a little trick of the trade, just say you want to kill yourself.” Because there is no detox unit in the hospital that I went to, but there is one in the fucking psych ward with the wackos, so you gotta fake like you wanna kill yourself. He whispers in my ear and says, “just say you’re a threat to society or yourself”. So I told them that, and they were like alright were locking him up! All of a sudden the door shuts behind you and you’re in some gown. I was in there a couple of weeks but talked my way out. They knew I wasn’t really going to commit suicide, I was in there just to detox.

What was that like inside?
It’s worse than jail in that fucking place. After a few weeks, I had to get the fuck out of there, so I stopped taking the drugs they were giving me and saying I was real nervous. That’s when I got out two days later. If you keep taking what they are giving you, they will keep your ass in that shithole. Time goes by there slower than anywhere else I’ve ever been. It’s like being on an airplane for weeks full of weirdos.

What do you do every day there?
There’s some people that are so far gone you can’t even have conversations. I mostly hung out with the older dudes, who were like full blown vodka drinking maniacs. They wouldn’t leave the room because they were depressed. You gotta go to AA meetings 2 or 3 times a day, you get like 1 hour a week outside in the sun. The showers are terrible, shit everywhere, piss, woman’s panties around.

Once in a while you’d get some asshole coming off a crack bender and he’d come in there and it would take him a few days to calm down. You got the padded room and all that shit, all the good shit you see on TV. It sucks trying to go to sleep when you hear people screaming, “I CAN’T TAKE IT IN HERE ANYMORE. FUCK THIS I’M KILLING MYSELF!!” every fucking night man. Luckily I started reading a lot in there so that was good. People would be sneaking cigarettes in there. The matches were the biggest problem because some asshole would like light his bed on fire to get attention. 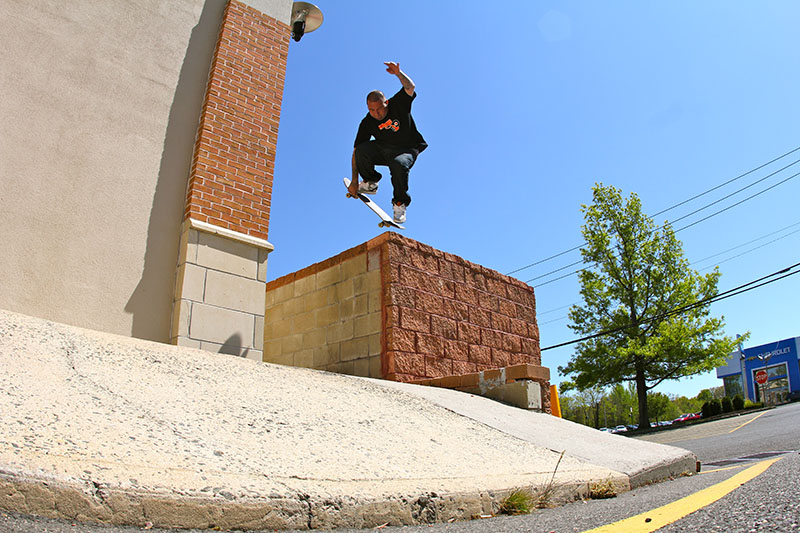 Are you sober now? How are you feeling?
Right now, I only drink, nothing else. All the bullshit is in the past… Reality is a motherfucker but nowadays I’m feeling like a new human being.

Will there ever be a full Wenning comeback? Or are you over it?
Well right now my main focus is on my new company. There is so much involved in running a company man but once I get it up to full speed I will think about a real deal comeback.

Last words?
To all the young dudes in the skateboard industry, respect pros that have been through it, listen to what they have to say and absorb the knowledge they gained throughout the years of being pro. Shit’s been insane for me but I’m feeling better than I have in years and want to thank all the people that have stood by me my ups n’ downs. Excited about this new project and gonna make Lockdown the best it can be. Thanks to JW, Drew the ol man, Bud the ol ol man, Rich since kindergarten, moms, Rick Dawson and the Canada connect…. much love to those who know the real me…