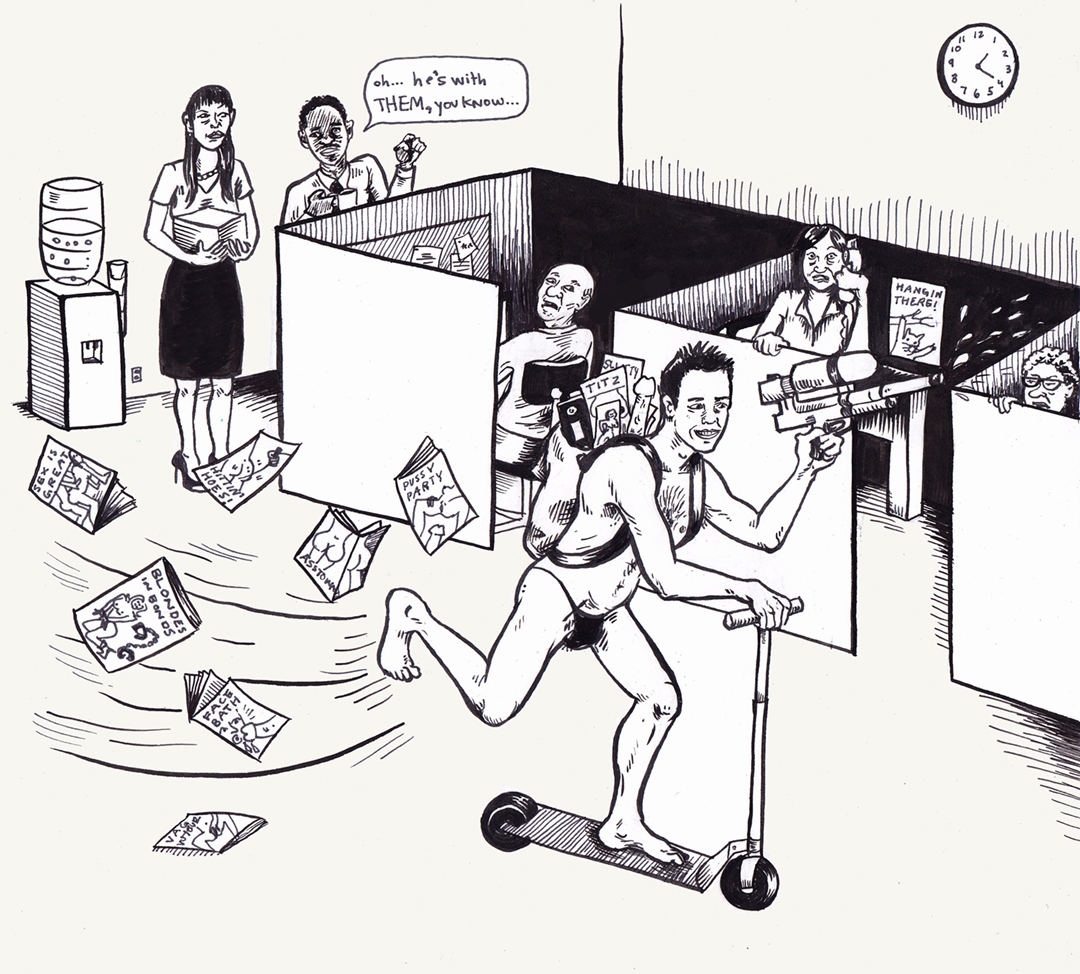 Imagine this: A bunch of skateboarders start a magazine in the 90’s with no rules, no censorship, no experience, and whatever drugs they could get their hands on. That magazine became known as Big Brother, the perfect mix between genius and totally fucked. We talk with former Big Brother intern/slave Stephen Randolph, as he reminisces about fighting Chuck Liddell, meeting Larry Flint’s lawyers, roaming the halls naked and high, and of course, transcribing interviews.

How did you become a Big Brother intern?
I was 18 and I went over to my friends house and he always had really fucked up crazy videos. Like Gummo, Man Bites Dog and stuff like that. Around 1997 he showed me Boob, and it was like, this is what I had been looking for my whole life. Then he showed me older magazine issues from 1994/1995. I just went home and made a vow to myself that I would get into their next video. At the end of Boob it said LFP (Larry Flint Publications). So I dialed 411 and asked for LFP and got through to Chris Nieratko’s voice mail, and told them I was looking for an internship and I went to UCLA (I never even went to college). I did that for a month or two straight and they never ever called me back. Then I was like, fuck it, I was just going to film fucked up shit. 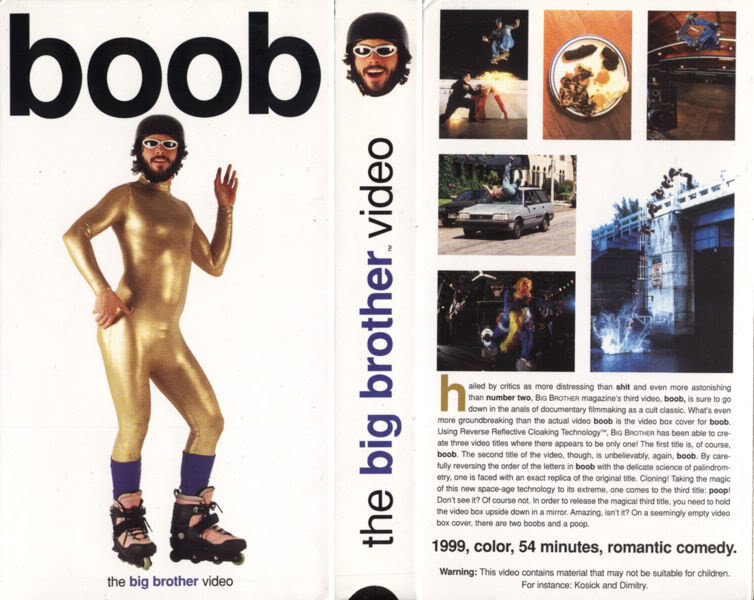 What did you film?
My friend dressed up as a ninja and we went to the Rose Bowl in Pasadina. He was just head to toe in $500 worth of ninja gear. He had claws for climbing trees, he had nun chucks, he had a full strip of ninja stars across his chest. I needed to get something to show these guys that I was cool, but we had nothing, we were like kicking over golf bags and shit.

Finally my ninja buddy was just like, “I’m gonna fuckin’ jumpkick the next motherfucker who comes by.” This chick rollerblader comes by, all 90’s style, wrist guards, Raybans, a CD player, it was just so gnarly and she was just so hot. My friend goes behind her and lays her out. She started screaming, all this mayhem ensued. I floored it and I was like in a car chase. I got away and hid the car in some bushes at my mom’s house. Then I called back Larry Flint Publications again, and told them I got footage of me fucking up a rollerblader. Chris Nieratko called back in like 10 minutes.

Once you got there, what was it like working with Carnie, Chris and the rest of the staff?
I was constantly in terror because they were all 10 years older than me and they were all really funny dudes. I remember I had to psych myself up everyday before I walked into the office and I would get a nervous rumble whenever I would enter the 2nd floor. It was Russian roulette. Some days they would just be like, “OK you got to go and wear this suit, and fight Chuck Liddell,” and others it would be transcribing interviews all day.

How much did you get tortured?
Fucking Chris Nieratko, dude, lucky I didn’t fucking kill him. He is a good person inside, but he would always make me fucking clean things and fucking go get him food. Chris Nieratko was the biggest asshole on the planet earth.

What did you wear to work?
The raddest thing was that we were the only magazine out of like 40 magazines that didn’t have a dress code. Everyone was in business attire, except for Big Brother. So I would walk in with sandals a fucked up t-shirt with mustard stains on it. We would all just dress like shit. That was the coolest feeling. Being that young, being at Larry Flint Publications, wearing just ripped up fucked up clothes, and having people be like, “oh, he’s with them….” We were creeping out all the creeps.

We would be in an elevator drunk shooting supersoakers full of piss at everyone. We would play hockey in the fuckin parking lot. The rules didn’t apply to us. You’d be in an elevator full of the biggest scumbags who are putting out all the barely legal magazines and throat fuckers and shit and they were like freaked out around you. That was a pretty empowering feeling. It was like in the mafia.

”We would be in an elevator drunk shooting supersoakers full of piss at everyone.”

Who else did you hang out with or see around the office? Earl Parker?
I still hang out with Earl! During the Big Brother days I would go over to Earl’s and just use heroin. He wouldn’t even give a fuck. He wouldn’t even acknowledge the fact that I was doing it. He would just keep watching porn. Now I see Earl like once a month and he has no idea what he was apart of. We would go get prostitutes in Tiwana every once in a while. This is while there is a war going on, and we were still going down there. With dead bodies and all kinds of fucked up shit.

Like he doesn’t know? Doesn’t care?
I always ask him, if he knows what he was apart of and what he started. And he goes, “nah whatever.” He just doesn’t give a fuck dude.

Earl also takes gnarly pictures of girls, he’s obsessed with taking pictures of girls asses and young girls eating lolly pops. He has pictures that are so gnarly that I’ve been sent on my cellphone… I’m like oh my god, DELETE. If I got caught with those I’m going down. Earl will then write stories about these girls. He’s been doing that since like 91′. He pretty much hasn’t flipped the script. 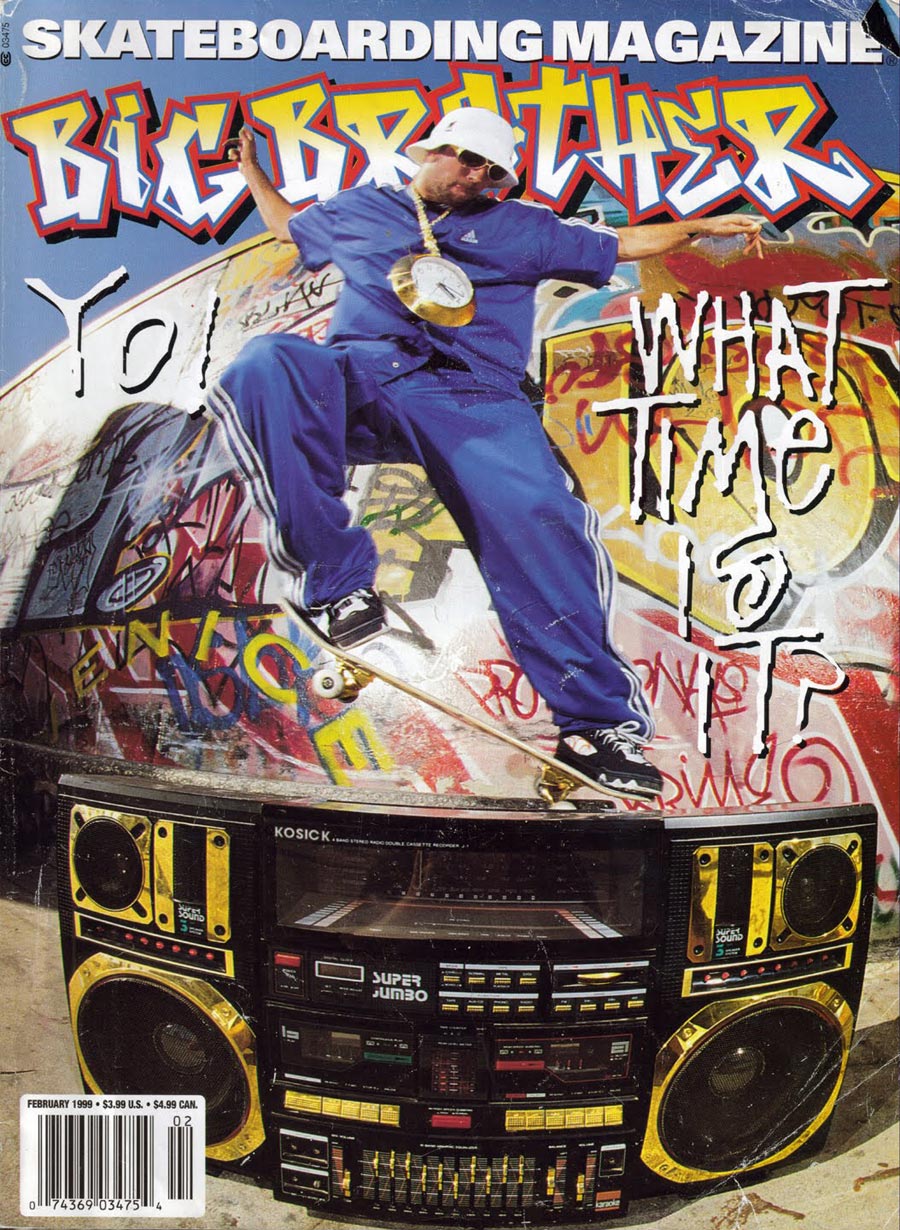 What other shit were you responsible for at Big Brother?
I would have to mail out everything there, memorabilia, t-shirts, pictures, slides, fucking nude photos. Somehow I sent a photographer who sent us his shitty pictures, to some kid in Kansas City. I didn’t even know it. So the photographer calls and asks where his slides are, and tells us they are worth $20,000. All of a sudden, I was in a lawsuit. I went up and sat at this round table and met all of Larry Flints lawyer’s, it was so intimidating. I mean here I am just some 18 year old stoner druggie kid that just wants to write some weird random shit and now I am on the top of Larry Flint’s building in a lawsuit.

What types of stuff did you do that used to piss off other people around the offices?
Well I guess nudity in the halls and stuff. I was always wearing a thong, making a fucking scene riding a razor scooter through the fucking halls while people were conducting business. I got really hooked on pills with one of the guys that worked there, so I would just be out of my fucking mind on coke and stuff and just riding a scooter around the building going nuts.

”Pretty much everyone was on some sort of drug or alcohol at all times.”

That was kind of the norm at that time?
Pretty much everyone was on some sort of drug or alcohol at all times. Dave and Chris were able to hit it really hard at night and show up and at least put in a good 8 hours during the day. Believe it or not, this is the one thing that a lot of people, like my mom never realized, my love of learning and reading came from Big Brother magazine. If I didn’t know a word, Dave Carnie would make me look it up in the dictionary. A lot of time we were fucking around and going crazy, but I also was transcribing 6 hours worth of audio, I was reading a shit ton of content and I was starting to write stories.

Those guys were workaholics too. Dave was able to kind of curb it, he goes on binges and then just stays sober for a period of time. I never could do that, I kinda spun off the wheels in my personal life shortly after Big Brother. But for a while that was one of the coolest spots on earth as far as I’m concerned.