A LOOK AT THE SKATEBOARD DROUGHT OF 2020 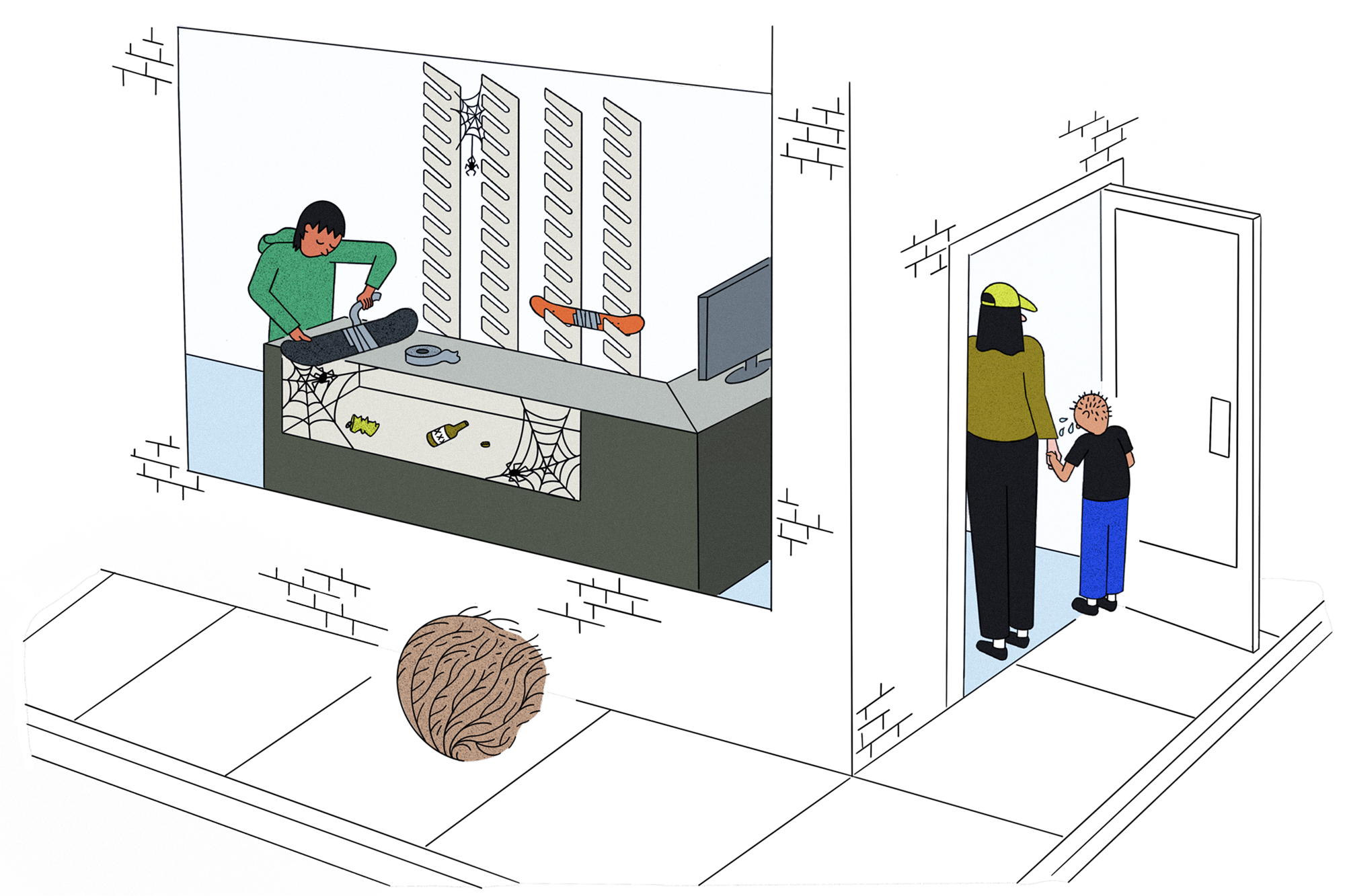 If you’ve walked into a skate shop over the last couple of months, you may have had some difficulty getting your hands on the product you came in for. Sadly, these days it’s not unheard of for a shop to be fully out of boards, trucks, wheels, or bearings. Since the start of the pandemic, the demand for skate hardgoods has gone up, but manufacturers, distributors, and retailers have all been put in a pinch. Unable to maintain production and distribution at pre-pandemic rates due to lockdowns and new health and safety guidelines, the demand for hardgoods is now bigger than the supply, and the whole distribution chain is struggling to catch up.

The pandemic had already taken hold in Tijuana in April 2020 when Grant Burns, who owns BBS Manufacturing contracted COVID-19 across the border in San Diego. He emailed his staff to let them know that he had gotten sick on a Friday, and by Monday, people were nervous. The state of Baja California, Mexico had already declared that employees with pre-existing conditions should be allowed paid time off, and Burns, gave the rest of his employees the option to do the same. Less than a quarter of his staff took him up on it, and the government ordered the shop and other non-essential businesses to close two weeks later.

With the shop sitting idle, numerous skate brands that relied on BBS to press their decks lost their manufacturer, and their stock of decks was decreasing across the skate ecosystem. When the factory opened back up in May 2020, it doubled the number of busses transporting employees to the plant to limit capacity on the rides and added a tunnel that sprays disinfectant at the entrance of the factory. The workforce also nearly doubled, adding more doctors and nurses for the factory and hundreds of line workers. 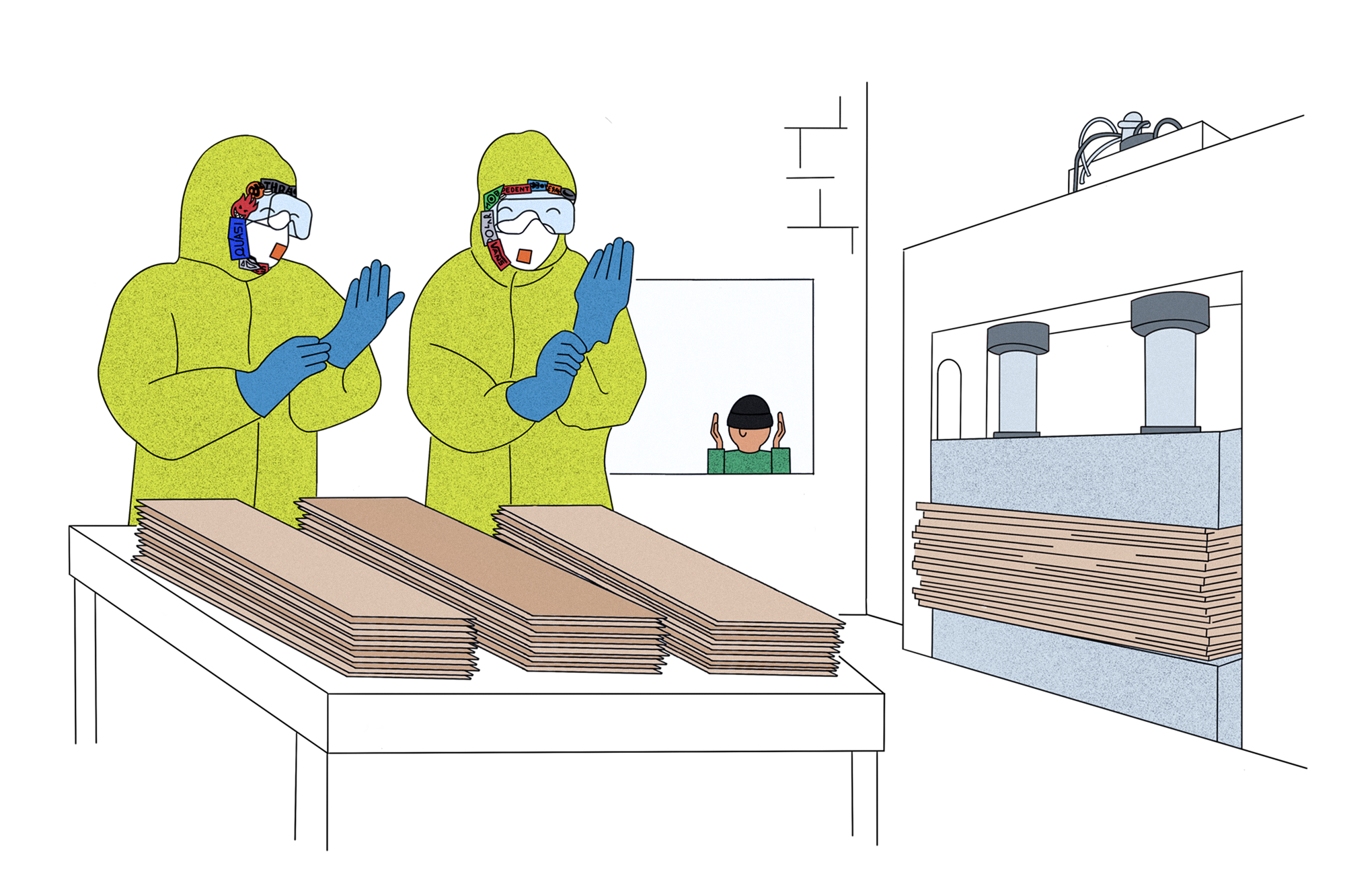 Before the shutdown, BBS pressed an average of 7,000 decks a day. Today they average 10,000 a day, which is double what they had been producing four years ago. “Since we’ve been back up and running,” Burns said, “we’ve never produced as many boards as we’re producing now, and our customers have never shipped as many boards as they are right now.”

BBS is hardly alone in the struggle. While the factories and foundries that make skateboard parts were caught flat-footed when the pandemic hit, most have sprung back, and are trying to make up for the lost time.

But at the same time, shop’s board walls have been as patchy as a teenage mustache. Wheels are even more inconsistent, and your local shop might still not list trucks on their webshops so that they don’t sell out in their brick and mortar stores.

Why is the skate industry having so much trouble coming out of the slump?

“I was literally buying product off my sponsored friends, for a good deal.”

At Tenant skate shop in Brooklyn, owner Kasper Bejoian turned to a time-honored skate tradition when the hardgoods drought first hit: copping gear off local sponsored skaters. “I was literally buying product off my sponsored friends, for a good deal,” he said. “If they get a box from Venture or Indy, they’re maybe skating two pairs,” and the rest went into Tenant’s hardgoods case.

Yet, it wasn’t enough to meet the demand, which had been growing amidst the skate boom that exploded in the spring. Product started moving quickly, and not just decks or sets of wheels, but completes, which burned through stock even faster. “I was turning people around, because I was like, I have everything but wheels. I can’t even set you up with a complete,” he said. “You don’t realize that a $20 difference is a matter of making $200, because they can’t buy the complete board.” He bought decks, wheels, and trucks from other shops that could spare them, and brought in newer brands like Darkroom Skateboards and Wayward Wheels because they had inventory available.

Making matters a bit more complicated, Tenant didn’t have an account with Deluxe Distribution, meaning that the shop couldn’t order directly from one of the largest manufacturers in the game. The only way to get a big section of their brands—Spitfires, Thunders, and Ventures—was to buy from the gray market, or from third-party distributors that stock several companies’ brands under one roof. 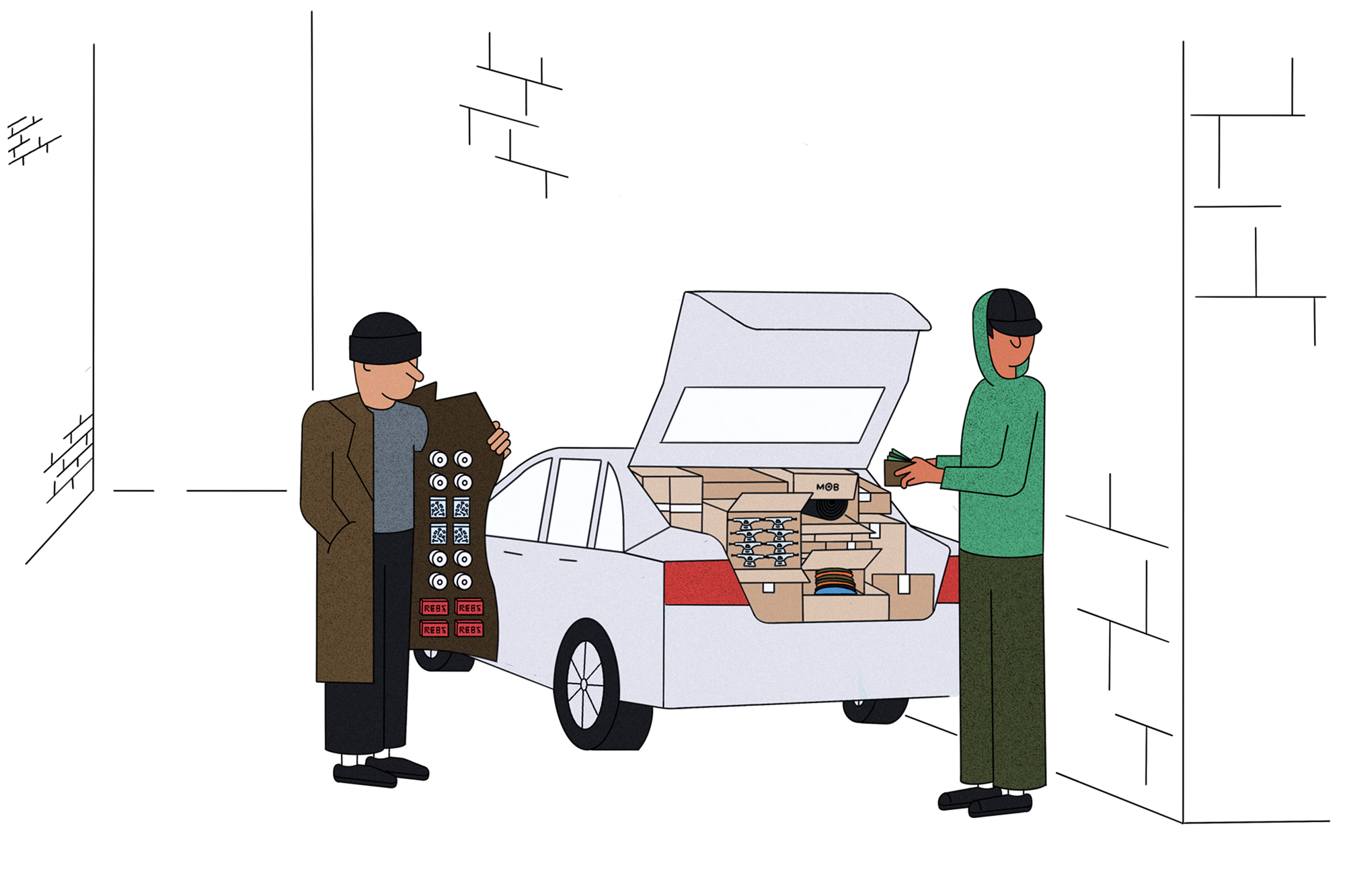 In the pre-pandemic days, third-party distributors like Eastern Skate Supply made it easy for a shop to order a few sets of Independent trucks, a dozen Krooked decks, and a couple of Thrasher hoodies in one place, as opposed to calling three different companies and having to hit their order minimums. Once the hardgoods shortage started to materialize, though, they started placing limits on how much product account holders could order.

In the past, Eastern kept between three and four million dollars of inventory from hundreds of brands in its warehouse. When the inventory had all sold out in the spring of 2020, the sales team’s jobs became less about wheeling and dealing, and more about managing inventory and trying to be fair to all the shops that wanted to buy from them. “You can’t please everybody—we learned that a long time ago—but we’re doing our best to please as many customers as we can,” said Eastern’s president, Reggie Barnes. Eastern hasn’t been accepting many new accounts since the pandemic hit, and has shifted focus on coordinating sales with its existing network of shops so that they all have the chance to get a piece of the shipments that are still coming in. 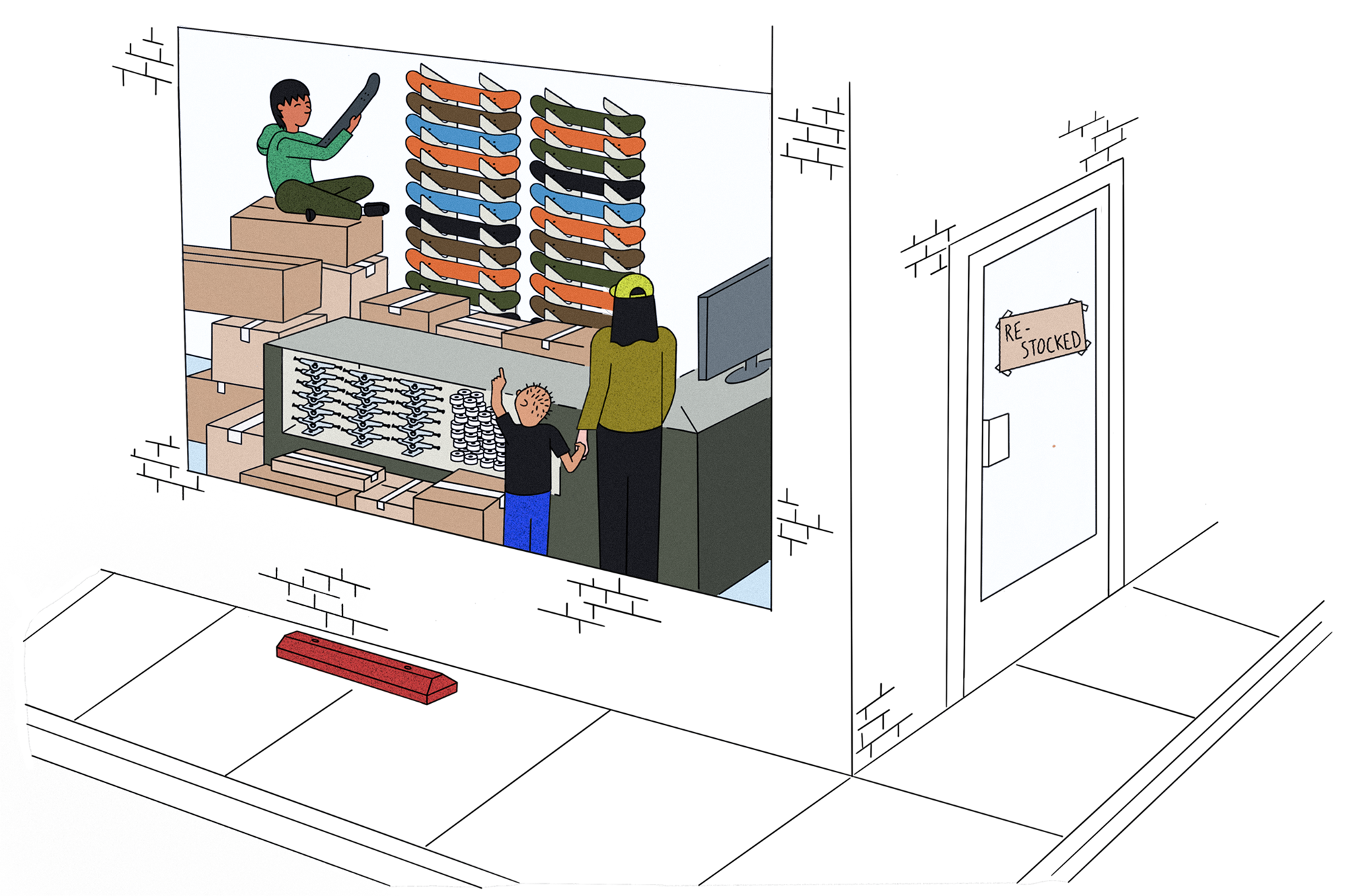 It’s a similar situation at NHS, home of brands like Independent, OJ and Santa Cruz.

NHS has been playing whack-a-mole against a rotating cast of hardgoods selling out: decks, bearings, trucks and wheels. Many of the factories that make the goods are in China, meaning that their manufacturing was first interrupted at the beginning of 2020, and continued to evolve as the pandemic hit North America and shut down domestic production. COVID safety protocols have hindered production capacity at the factories that reopened, leaving them producing at what Kendall estimates is 85% capacity. But the biggest factor is still demand. “I’ve gone down to our warehouse and seen not a box of Indys,” he said. “I’ve never seen that before.”

Companies that manufacture in North America have been able to scale up production faster, whether at BBS in Mexico or Bones Wheels in central California. Bones was able to go ahead with its scheduled plans to move their factory during the springtime lockdown, and ramp up their production quickly. “We were manufacturing it, we were shipping it out,” said Rob Washburn, brand manager at Bones. “We had that luxury because we’re here in the USA.”

“I’ve gone down to our warehouse and seen not a box of Indys.
I’ve never seen that before.”

Domestic skate manufacturing is thriving, but so is COVID-19 in the US. Lucky for skaters, it doesn’t appear to be significantly affecting hardgoods production as badly anymore.

After struggling to get product in spring and the beginning of summer, FTC Skateshop in San Francisco is now comfortably stocked, according to manager Chris Gurinsky. They are also through what has traditionally been the busiest time of year, which is also easing the demand. “In the summertime, we get a ton of tourists, and obviously this year was lacking,” he said. In spite of that (and everything else), enough people came in that it was a good year for the shop: “Straight up, even with the drought, we’re probably making more money than ever,” he said. “At least in my time here.”

That seems to be a recurring theme throughout the industry, which nearly buckled under demand in the spring. “It’s a drag that no manufacturer can really supply the demand right now,” Jeff Kendall said. “But the upside is that we’re all selling quite a bit more than we did last year at this time. Our production facilities are producing quite a bit more. It just caught everyone off guard. I hate the phrase ‘perfect storm’, but that’s what it was.” He estimates that NHS will be completely caught up and able to meet demand between April and June of 2021.