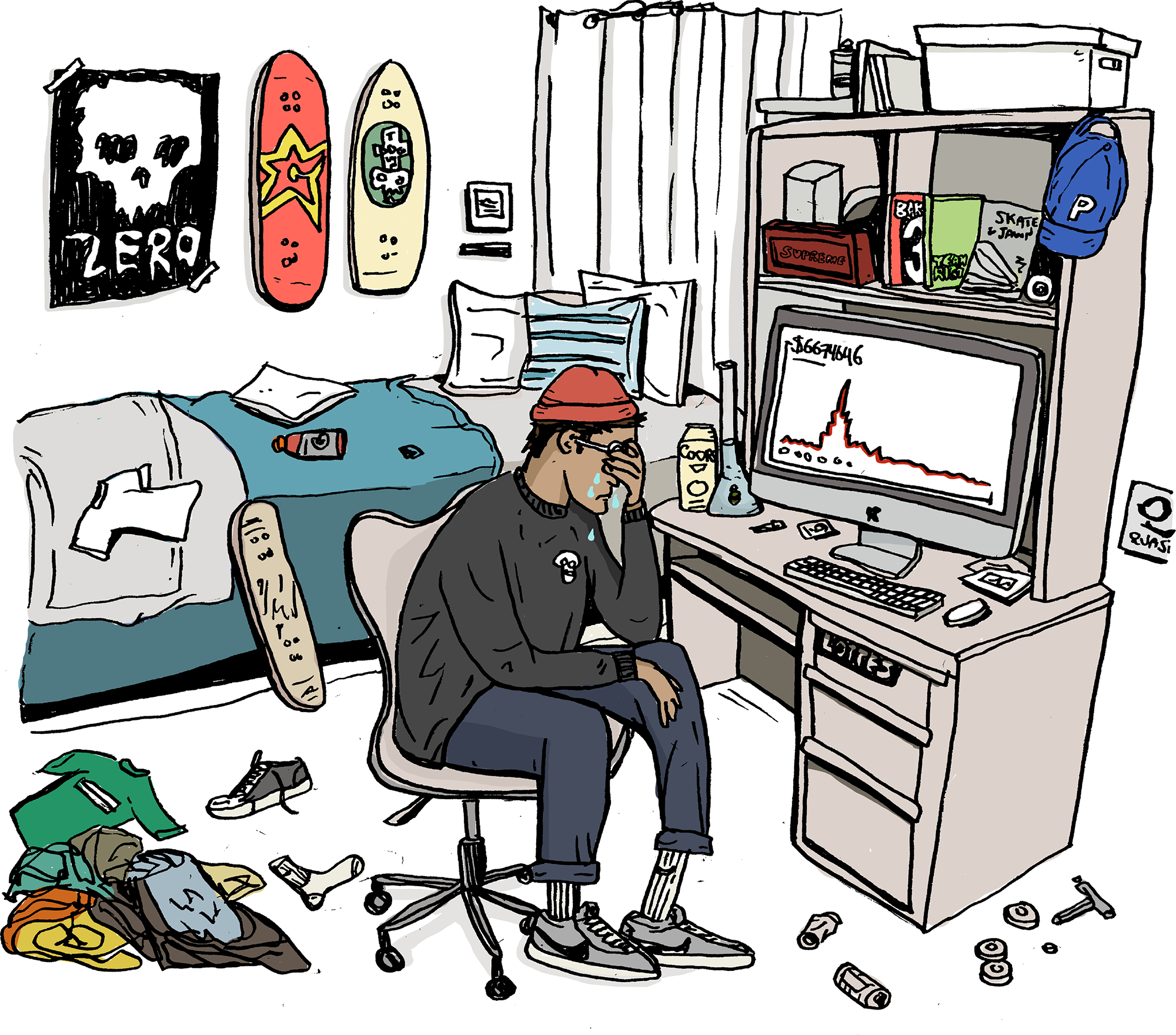 I’ve always wanted a VX1000, and when the stock market crashed in 2020, I saw an opportunity to make it reality.

March 16th, 2020 was the first day I jumped into the stock market, which was the day the market bottomed. Then lockdown was placed in California and I was stuck at home with my family and a lot of time, getting hefty COVID relief money from unemployment and stimulus checks. With that time, I traded stocks, and after consuming enough stock market videos and articles, I decided to dabble in options trading. It was hit or miss at first, but then I struck wins one after another, and that’s when I started sending screenshots of my gains to friends and family.

I stared at my computer screen and smiled in disbelief and excitement. In about a month, I made over $60,000 in the stock market with trading options. I won’t go into the lengthy details on what options trading is, but essentially, it’s like trading stocks but with higher risk and reward. It was crazy, because I made more money than I would’ve made in over two years at my job working as a machine operator. I kept thanking the universe out loud like a crazy person. It felt like I could finally relax and not worry about money, like I finally had a way out of being poor. It was one of the best feelings I’ve ever felt.

At 26, I felt my 30’s creeping in and I hardly had anything to show for. I dropped out of college. I had hobbies that bordered on passions—skateboarding, filming, and writing, but I hadn’t done anything significant with them. And now I had the money to invest and potentially be in a position where I could quit my job and have more time to explore those hobbies. That was a profound feeling. From there, I bought new skateboards, new clothes, paid rent, and so on. I also opened a brokerage account for my mom and bought her some stocks. My mom was stoked, so she told my relatives about the money I made. Then I was hit up for investment advice by my relatives she told, most I hadn’t talk to in years. It was hilarious and endearing seeing everyone treating me like I knew something, but all that really happened was that I got lucky. I felt validated for sure, though. 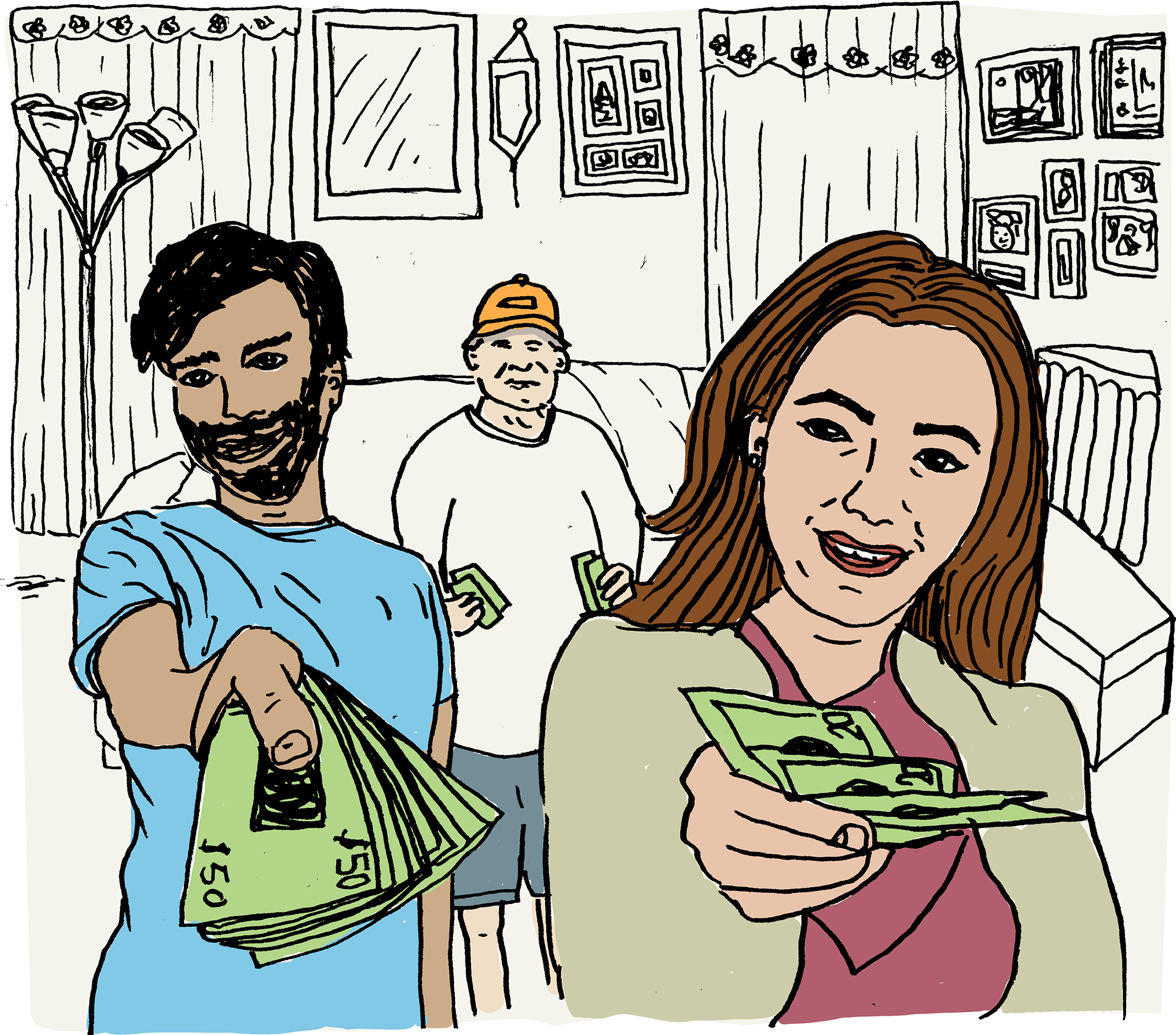 At that time in the stock market, it was easy to make money. Buying the dip worked almost every time. It was a euphoric moment for investors and traders, but things got rocky. Before things went to shit for me, I talked to one of my supervisors at work about my gains. He told me to withdraw the money and run, that I was lucky, but I didn’t take him seriously. My supervisor told me how his family likes to gamble and that I could lose it all. “Don’t worry, I’m playing it safe, I’m playing it safe. I’ll be fine,” I told him.

The strange thing was that it wasn’t devastating losing the first $1,000, then the next, and the next, especially considering how little I made at my job (minimum wage). I was treating $1,000 losses like a minor inconvenience. The money in my account almost didn’t seem real, like it was an inconsequential video game. I’d lose and then I’d win. I’d be up by 5 or 6 am, tired because I got out of work at midnight and usually fell asleep after 1 am. I stared at charts on my computer screen as my family slept, watching the price action of the companies I was trading, demoralized by each loss or ecstatic and validated by each win, stuck in a tug of war of profit and loss. Then my account sunk into the $50,000 range, then the $40,000 range. Despite losing so much money I kept at it and depression slowly set in. I also wasn’t sending screenshots anymore.

Once my account hit the $20,000 range, a part of me knew I would end up with nothing if I didn’t stop, but another part of me was still in denial and I believed I could get all the money back. “It was just bad risk management,” I thought, and if I was more careful, sure, it’d take longer to get it back, but I could get back on top and continue to grow my wealth. Inside I felt like a liar though, because I was given praise that I wasn’t living up to anymore. And that was probably the biggest fuel for my trading, to prove that praise wasn’t misplaced. I was only doing options trading on my Robinhood account, so I took some money out and put it into my other brokerage accounts to make it more difficult to waste that money. But I kept trading with the rest of the money. 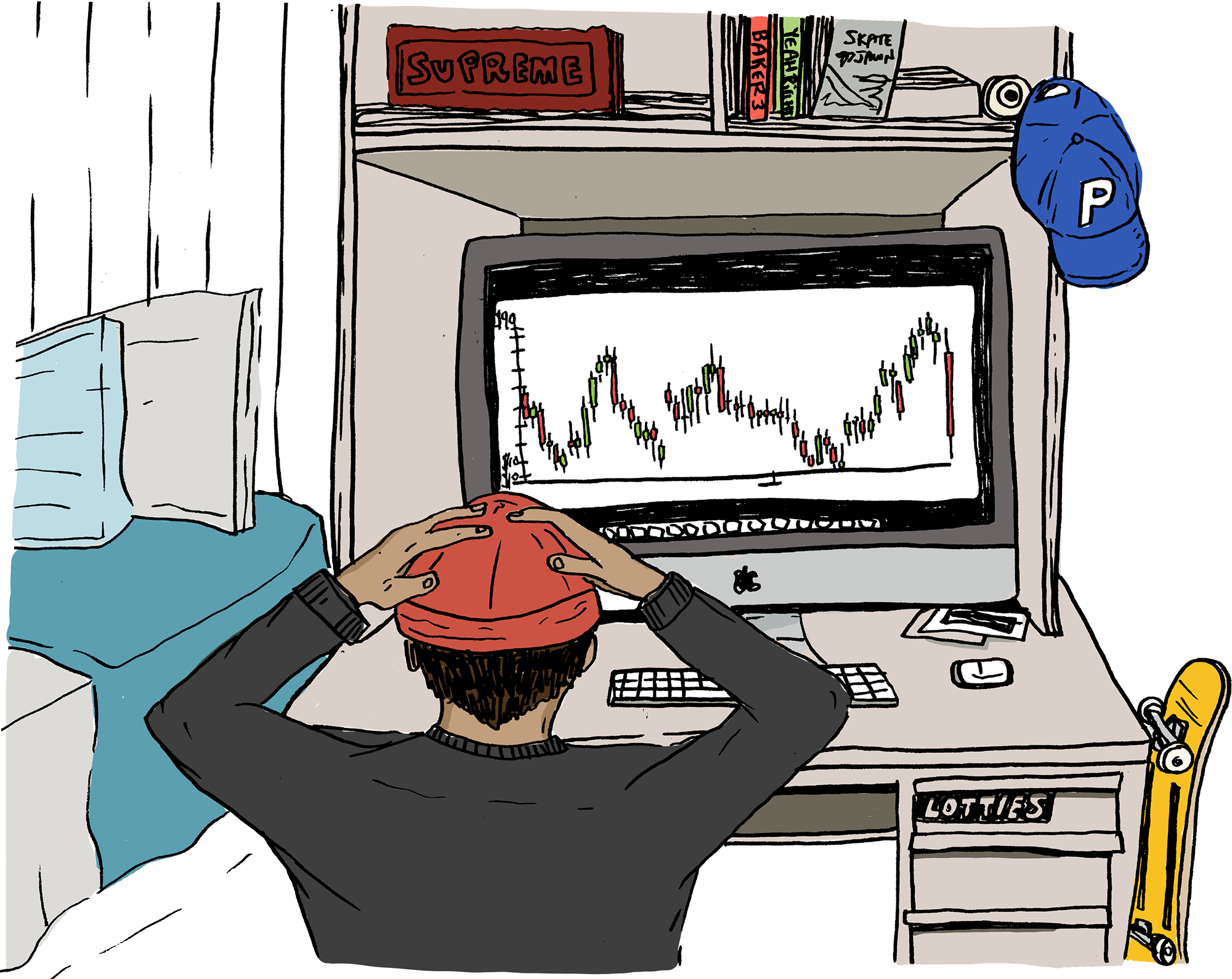 “Fuck, I wish I would’ve just taken all that money out.” Thoughts like that echoed in me every day and it sucked so much. I wished that it was all a bad dream and I’d wake up with the money I lost back in my account. I did my best to hide my emotions, but I was visibly depressed and distracted. Sometimes when no one was home, I’d be on the floor staring at the ceiling with a heavy chest and hating my life. I couldn’t stop thinking about trading either. It’s all I thought about. I still studied and looked for help on Twitter (not the best idea), yet it was the same tug of war each time and I couldn’t break above $20,000. I felt like I was being punished for being so greedy, undisciplined, and stupid. I knew I should’ve focused on being a less risky trader and stack up more wins than losses, but I kept taking risky trades at times fueled by emotion.

Then on a Friday, I stared at my phone and I knew I was fucked. I put too much money in one trade. Even after the market closed, I still tortured myself and stared at the trade I placed. It was one of the longest weekends where I wished for some surprise accidental win, but I knew that was unlikely.

“I did my best to hide my emotions, but I was visibly depressed and distracted”

When Monday came my account was at around $9,000. I lost more than half of my money, but a part of me was expecting to see zero, so I was relieved that I still had cash. I took out half of it. I was going to trade with less. I felt like I had to start from square one. Despite feeling totally defeated, it was a bit cathartic having no pressure to get all the money I lost back. That was good, I guess.

I still got asked for advice by my family and friends, and at this point, I told them to be cautious because I lost a lot of money, although I didn’t say how much I lost. Nothing changed, though. I was still trading badly. I kept making money and then losing, and then losing some more. Eventually, I liquidated my stocks in my other brokerage accounts so I could trade more options on my Robinhood. That money got drained too. Then it came to a point where I was at my usual spot at the kitchen table, and I decided I was done. I took most of my cash out and bought a Sony VX1000 so I couldn’t use that money on options anymore. 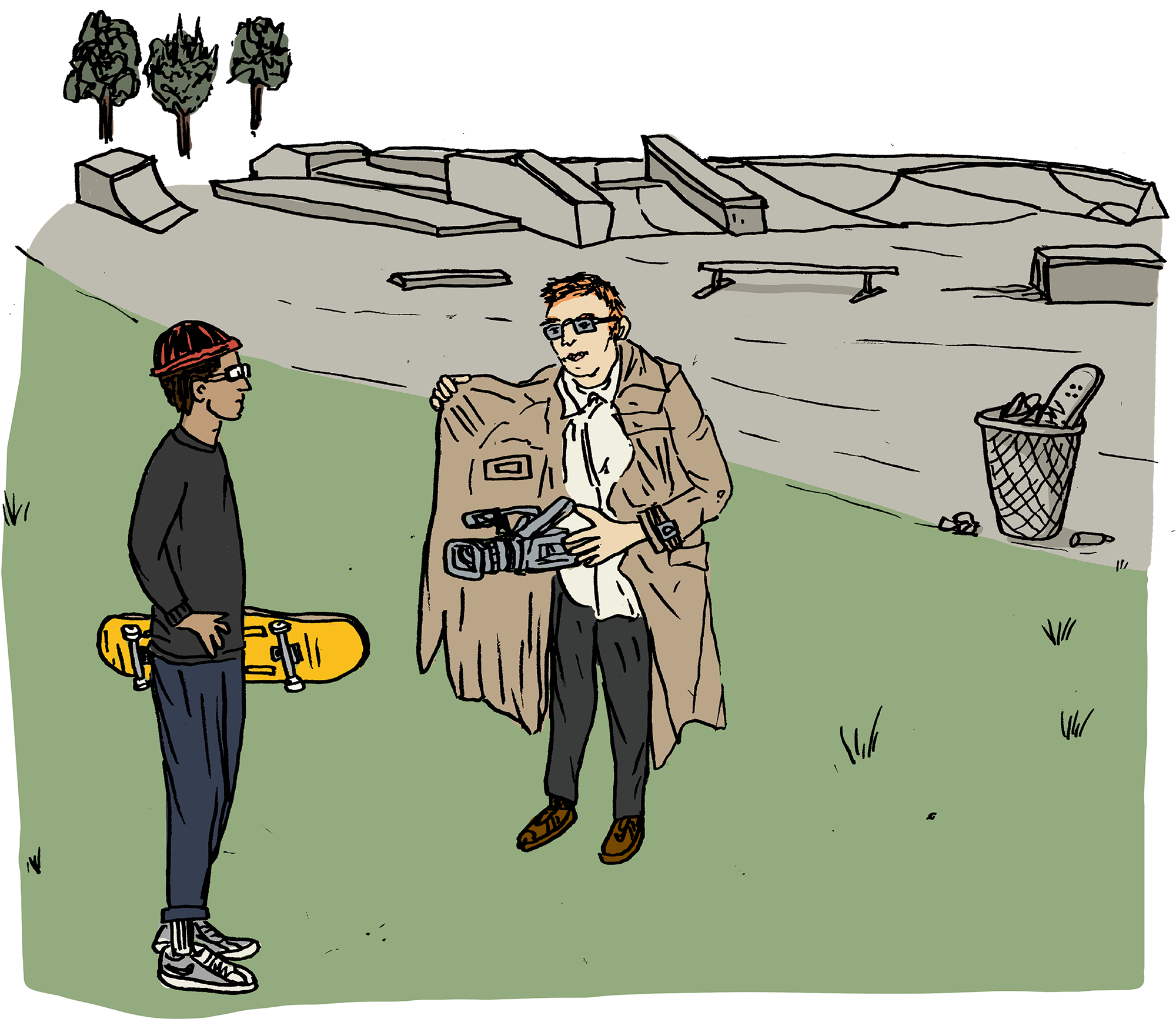 My wife knew I was losing money too, but she didn’t know how much. I was so scared to tell her, and it was something I had to work up the courage to admit. One day, I decided to tell her in a parking lot. Fuck, I cried. I just told her everything, and she wasn’t mad. She just comforted me as I cried, and I really needed that. I think that was the day I finally had closure and accepted my loss. My mom and aunt still let me trade with their accounts.

Long story short, I lost a lot of it by the end of December 2020, and then I got most of it back during the short squeezes that happened in January 2021 with GameStop, AMC, and other stocks. After that my aunt asked for her account back. I finally told my mom the truth of what happened with my account. She was shocked but we laughed about it. I still felt so stupid and bummed though. After my aunt took back her account, I felt I was finally free.

I was a lot less stressed once it was over. I could sleep more. I wasn’t thinking about the stock market as much. I still checked financial news every now and then, but it wasn’t life-consuming. When I talked about my losses for the first few months, I’d say things like, “I lost a lot of money,” but never go into further detail. I was embarrassed, but that wore off with time too. Looking back at it, it’s clear that at the core of successful trading are good habits like patience, self-control, the ability to have equanimity at every point in trading, and so on. 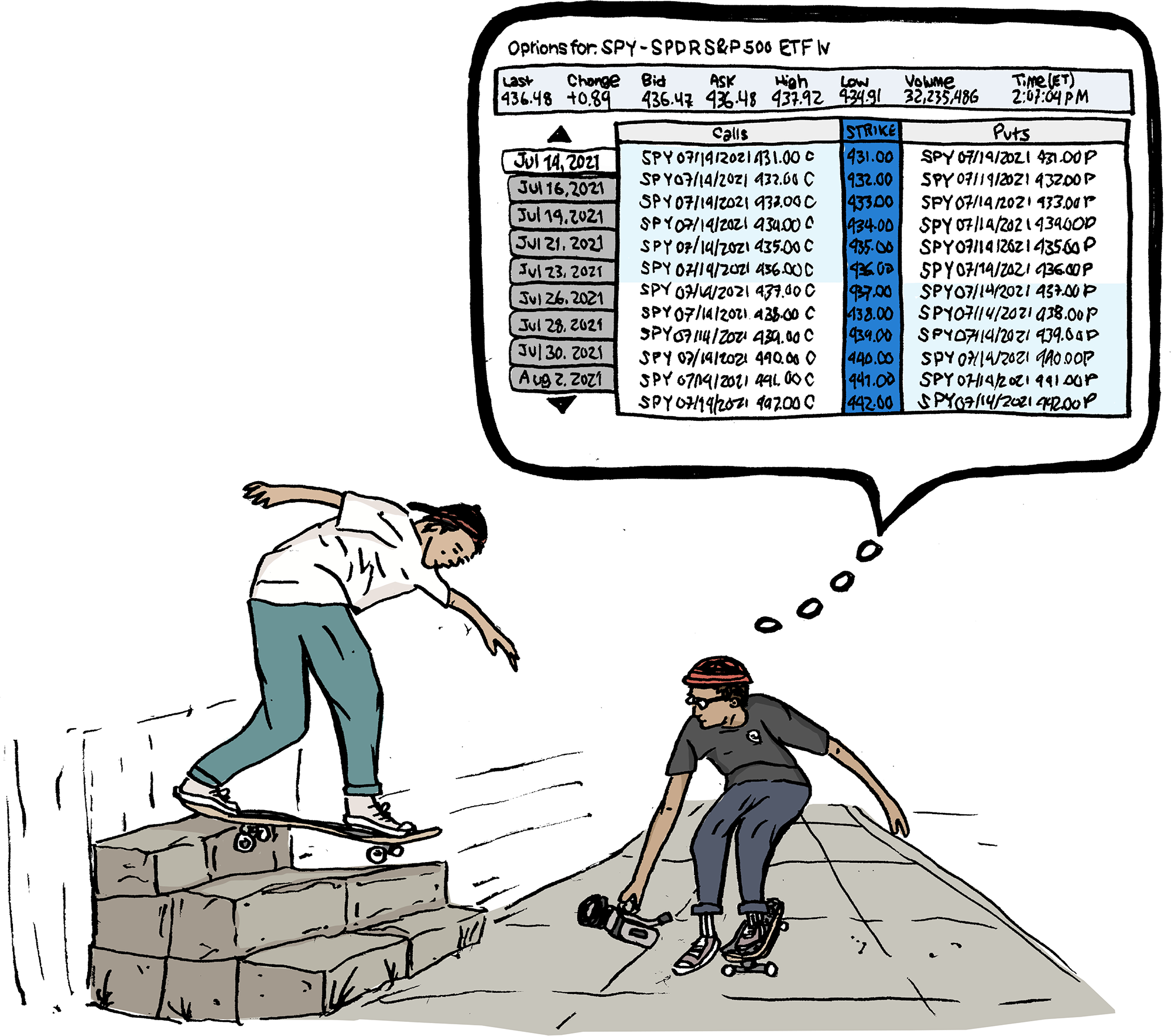 My problem was that I kept trying to practice those habits only in trading. I should’ve practiced those habits outside of trading too because outside of trading you won’t lose the kind of money you could lose in the stock market. I might’ve lost all the money I made and ended up with about a 1,000-dollar loss from my initial investment for 2020, but I do think there is something to trading and investing, and I might try again someday. I just had beginners’ luck and didn’t cash out.

Because of that, now all I got is this stupid story and less money, so yeah. Oh well, that’s just how it goes. Play stupid games and win stupid prizes.